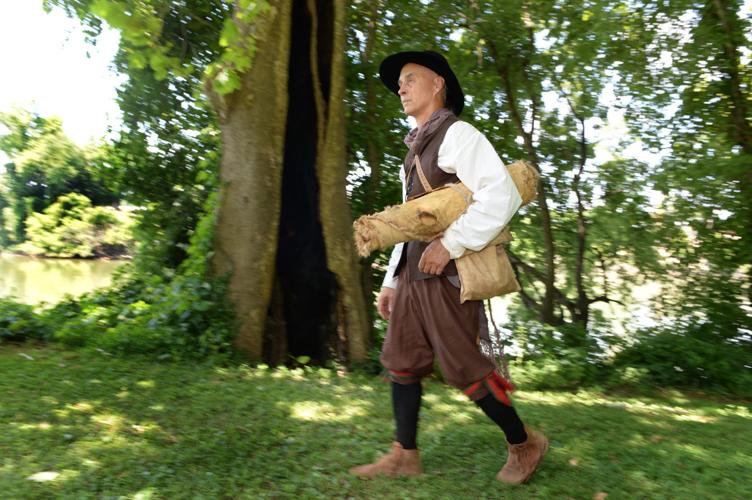 Gabriel Arthur, portrayed here by living history presenter Doug Wood, traveled from Florida to West Virginia and from the Virginia lowlands to the mountains of eastern Tennessee in 1673-74. 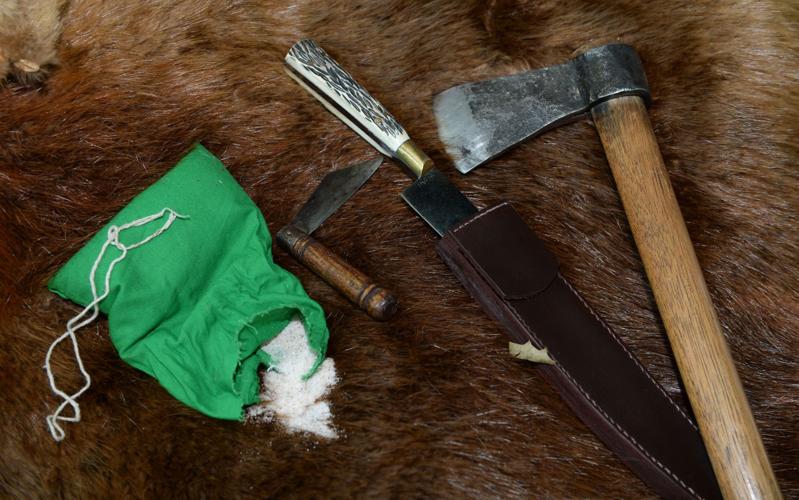 Hatchets, knives and curing salt were among items carried by indentured servant Gabriel Arthur in his effort to broaden the base for his employer’s fur trading empire.

Gabriel Arthur, portrayed here by living history presenter Doug Wood, traveled from Florida to West Virginia and from the Virginia lowlands to the mountains of eastern Tennessee in 1673-74.

Hatchets, knives and curing salt were among items carried by indentured servant Gabriel Arthur in his effort to broaden the base for his employer’s fur trading empire.

When he left Fort Henry near present-day Petersburg, Virginia, in May of 1673, Gabriel Arthur, believed to be the first European to lay eyes on the Kanawha Valley, had no inkling that he would soon become the most-traveled frontiersman of his time.

But during the year that followed, Arthur would travel with native people, either as a guest or a hostage, west to Tennessee, southwest to the Gulf Coast and northwest to the Ohio River Valley, making a layover to, among other things, swim and bathe in the Kanawha River with residents of a large Moneton Indian village before returning to Fort Henry on June 18, 1674.

The young Englishman arrived in colonial Virginia as an indentured servant to Abraham Wood, the region’s most successful fur trader and the commandant of Fort Henry, built in 1645 near the Falls of the Appomattox River. In addition to protecting nearby colonists, the fort was a trading post serving the needs of both settlers in the lowlands east of the fort and American Indians living in the foothills and mountains to the west.

Wood had assigned Arthur to accompany and assist James Needham, a business associate, in a bid to interest native people living west of the Occaneechi people — who then occupied portions of the Piedmont region of present-day Virginia and North Carolina — in dealing directly with Wood instead of using the Occaneechi as middlemen, as other tribes in the region had opted to do, during a blossoming beaver pelt trade. It was apparently Arthur’s first extended trip into the frontier beyond the fort.

“For me, Gabriel Arthur was a fascinating person to read about,” said Doug Wood, who recently added the 17th Century, English-born colonist to his repertoire of historic characters with ties to Appalachia that he portrays in living history presentations.

“He was young, illiterate and unfamiliar with the frontier, yet in one year, he managed to travel through 1,200 to 1,500 miles of it, learn the ways of the American Indians he met and get three nations of western Indians to take their beaver skins to his boss,” Wood said.

Last Week, Doug Wood portrayed Arthur in a living history presentation at St. Mark’s Episcopal Church’s “History Wednesday” series, in his hometown of St. Albans, a locale Arthur may well have visited in 1674.

Since Arthur could not read or write, the only account of his far-ranging journey was a letter Abraham Wood wrote to financial backer John Richards in London shortly after Arthur returned to the fort and provided his employer a verbal recounting of the expedition’s major events. Arthur’s return was a surprise, since Abraham Wood had received word several months earlier that both Needham and Arthur had been killed by Indians.

“My poore man, Gabriell Arthur, all this time ecaptivated,” Abraham Wood wrote to Richards. “All this time in a strange land where never English man before had set foot, in all likelihood either slaine or att least never likely to return to see ye face of an English man, yet by great providence and God allmighty, still survives.”

According to Arthur’s account as told to Abraham Wood and forwarded to Richards, after a false start in April, Needham and Arthur began their journey on May 17, accompanied by an Appomattoc Indian guide and seven native porters. Four pack horses carried three months of provisions for a journey that would end up lasting a year.

After traveling more than 30 days, with stops at villages previously visited by Needham in what is now southern Virginia and northern North Carolina, the party met up with a group of Tomahitans, who lived in the mountains to the west. The Tomahitans agreed to guide Arthur and Needham to their settlement, but not until a delegation of 11 members of their tribe traveled back to Fort Henry with a letter of introduction from Needham to meet with Wood, view his trade goods and learn his trade policies.

When the delegation returned, satisfied with what they learned, the group set a westward course, crossed the Blue Ridge and traveled another 24 days through the mountains and valleys of North Carolina before reaching Tomahitan Town, most likely located along a river in eastern Tennessee, according to Doug Wood’s research of the journey.

The Tomahitan villagers “were very kindly entertained” by their European visitors and their sole surviving horse, Abraham Wood wrote in his letter to Richards. “A stake was sett up in ye middle of ye towne to fasten ye horse to and an aboundance of corne and all manner of pulse with fish, flesh and beares oyle for ye horse to feed upon” was provided by the villagers. A scaffold was erected nearby for Needham, Arthur and their Appomattoc guide to sleep on, allowing “theire people to stand and gaze at them and not offend them by their throng.”

Sometime during his nine days of rest at the village, Needham gave Arthur the assignment of staying with the Tomahitans until he returned the following spring, to learn the tribe’s customs and the basics of their language. The young Englishman’s reaction to the assignment is not known.

Unknown to Arthur at the time, Needham was killed by an Occaneechi guide on the way back to Fort Henry. The Tomahitans, allies of the Occaneechi, became convinced that retaliation would follow from Wood and the militia in his command.

In a panic, villagers tied Arthur to a stake, piled a mound of dried cane around him, and were preparing to set it on fire when the king of the Tomahitans arrived on the scene, shot one of the would-be executioners with a Spanish-made musket, and freed Arthur. Arthur spent the next several months at his benefactor’s side, doing what he later told Wood the tribe mainly did for a living: “to forage, robb and spoyle other nations.”

The Tomahitan king told Arthur he would personally take him back to Fort Henry the following spring, but only if he obeyed his commands, one of the first of which was to join a 50-man raiding party headed for a Spanish settlement in western Florida, where they ambushed, killed and stole a musket, pistol and sword from a Spanish soldier on the outskirts of the town. Two gold coins and a cold chain found on the soldier were given to Arthur, which he ended up losing, Wood felt compelled to note in his letter to Richards.

The next raiding party Arthur accompanied involved the looting of an Indian village near Port Royal, South Carolina, where the Tomahitans “made a very great slaughter” of the settlement’s occupants.

In 1674, Arthur joined 60 Tomahitans in a 10-day northern journey to the Kanawha River to pay a call on one of the tribe’s allies, the Monetons, who lived in “a great towne which a great number of Indians belong to” that was “situated upon a very great river.”

“The Moneton town Arthur visited could have been the one here in St. Albans, but it is more likely to have been the town site at Buffalo, since it’s on the side of the river that matches Arthur’s description,” Doug Wood said. Both towns meet the general location of the settlement cited by Arthur — about one day’s walk upstream from the point where a large, northwest-flowing river flows into an even larger river flowing to the west.

The Tomahitan king had one more combat mission for Arthur before escorting him back to Fort Henry: An attack on one of several tribes hostile to the Tomahitans who lived along a stretch of land south of the Ohio River in present-day Kentucky.

During that attack, one arrow pierced Arthur’s thigh and a second arrow may have struck his hand. Unable to flee the battlefield due to his leg wound, Arthur was captured. Arthur’s exceptionally long hair made it obvious to his captors that he was not a Tomahitan, who favored a close-cropped look. After scrubbing their captive’s skin with water and ashes, they also discovered that Arthur was white, a fact they “made very much of” before returning his weapons and preparing him a meal of roast beaver.

By using signs, Arthur informed his former captors that a great deal of value could be added to the beaver they killed by removing their pelts prior to cooking, explaining that good pelts could buy them guns, knives, hatchets and cookware from his boss, if he was able to get back to Fort Henry and make trade arrangements. Arthur was taken to a trail leading back to Tomahitan Town and sent on his way.

After accompanying the Tomahitans on a final hunting expedition to the south, where the party killed and barbecued bears, beaver and sturgeon, Arthur was sent on his way back to Fort Henry, where he arrived on June 18, 1674.

“No one really knows what became of him after that,” said Doug Wood.

Two years prior to Arthur’s journey, Abraham Wood financed an expedition by Thomas Batts and Robert Fallam to find an overland route to the Pacific Ocean, then believed to lie only a few hundred miles west of the Alleghenies. The two explorers did come across the New River and followed it to a point believed to be just across the border from Virginia in present-day West Virginia, making them the first Europeans to set foot in the state.

Guest editorial: Beating the heat a matter of life and death

Atlantic League: Dirty Birds use late rally to down Kentucky