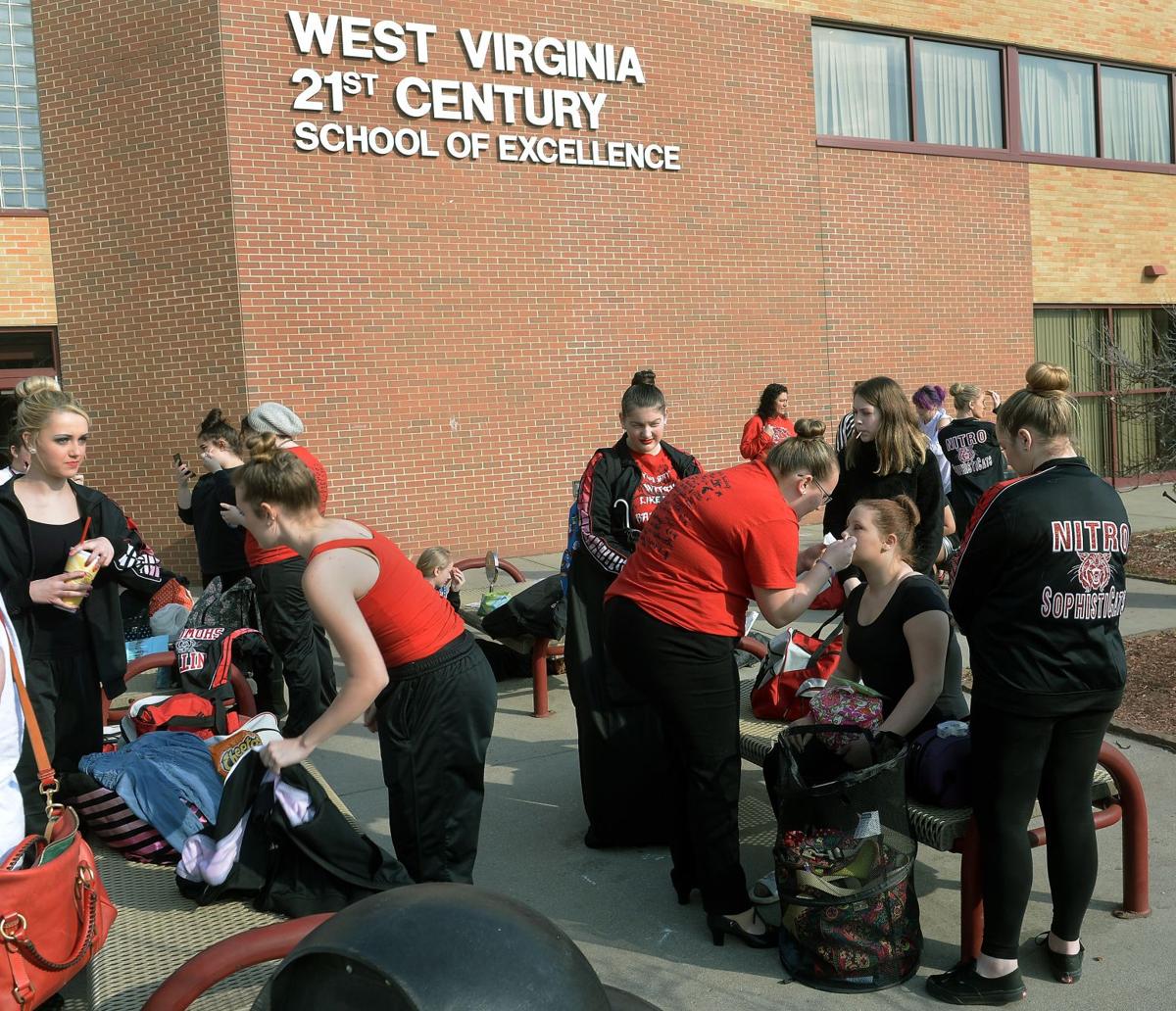 The Nitro Sophisticats put the final touches on their makeup at Hurricane High School during the West Virginia State Show Choir Festival. 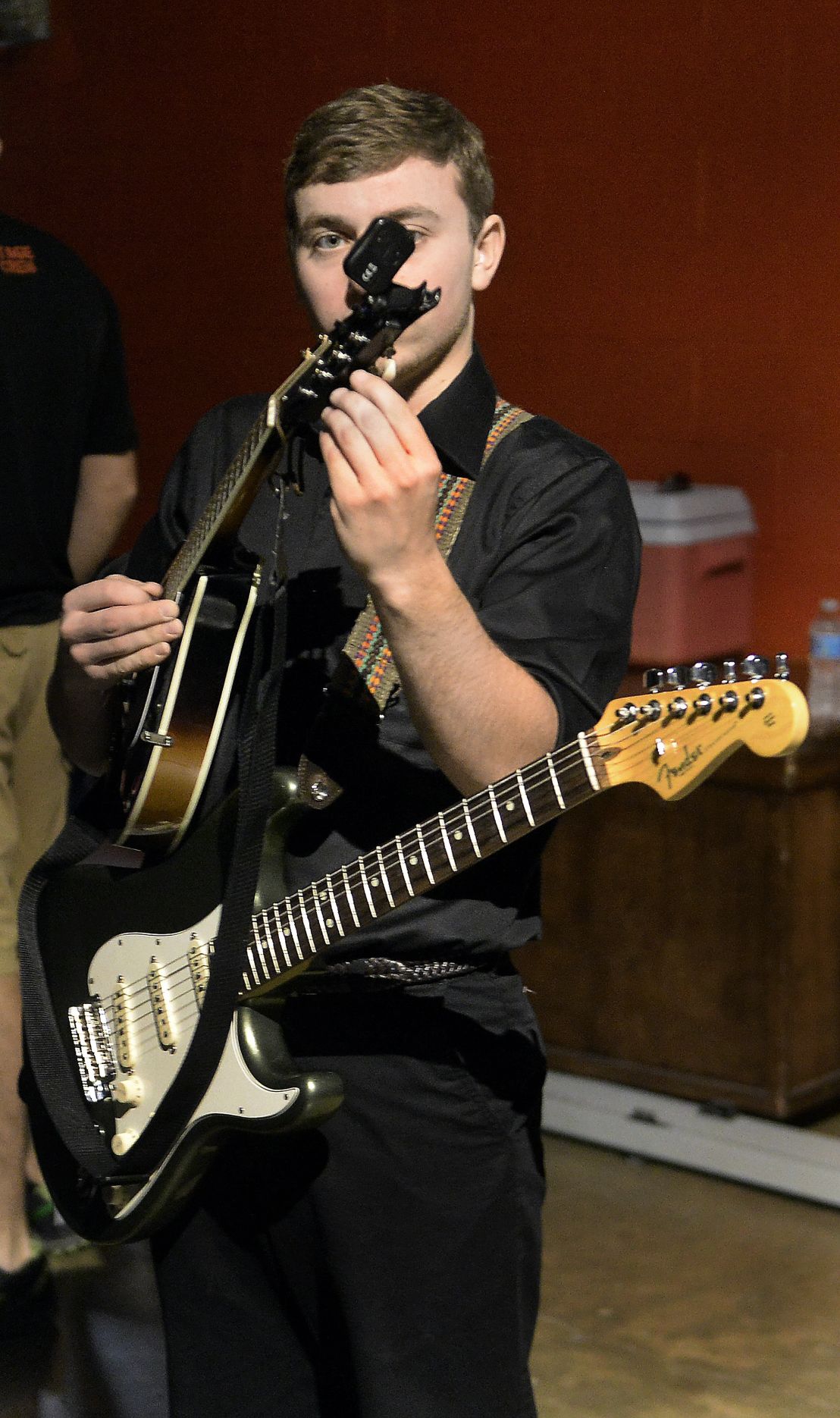 Alex King, a member of the Buffalo Show Choir band, tunes his stringed instruments as he waits in the wings for his time on stage during the West Virginia State Show Choir Festival. 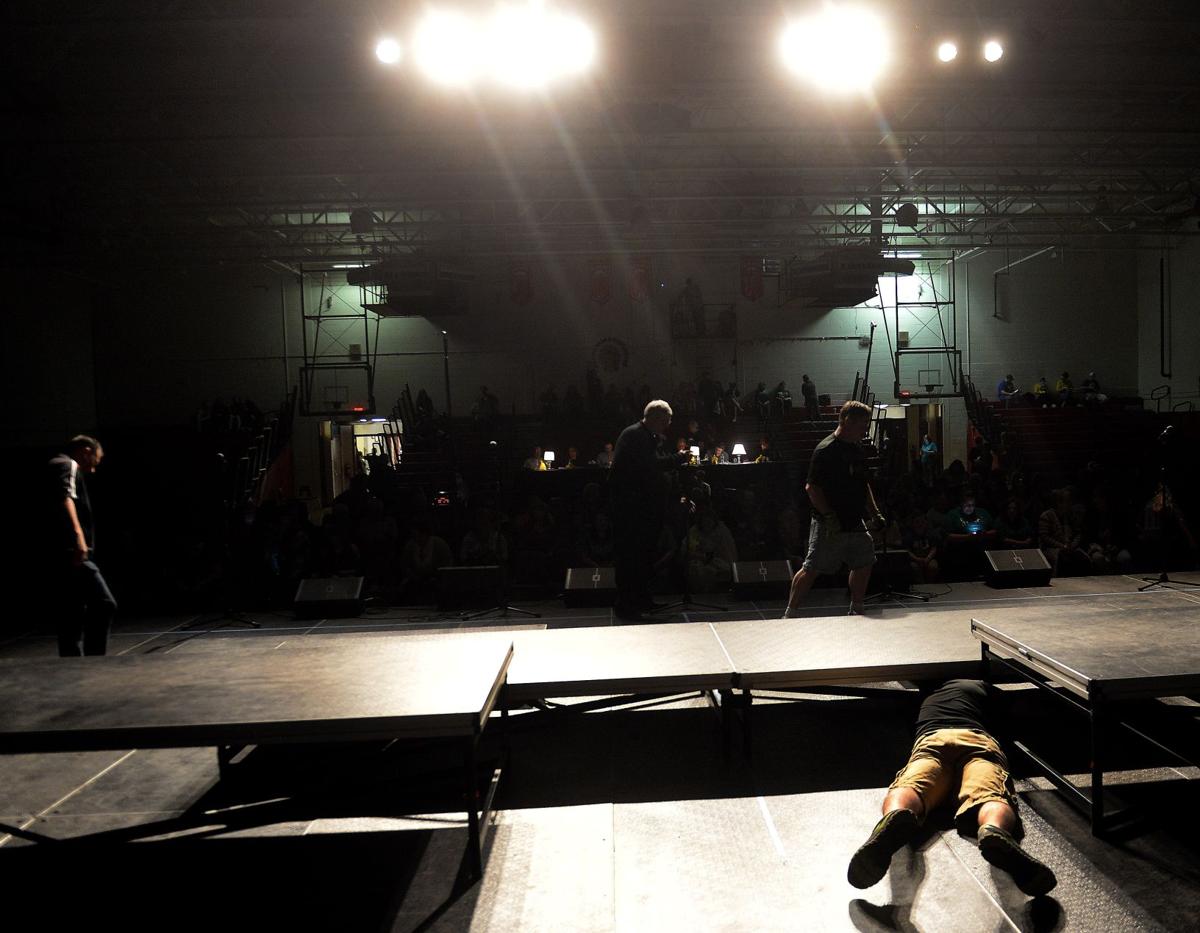 Stage hands get the sets ready before an act hits the stage during the West Virginia State Show Choir Festival. 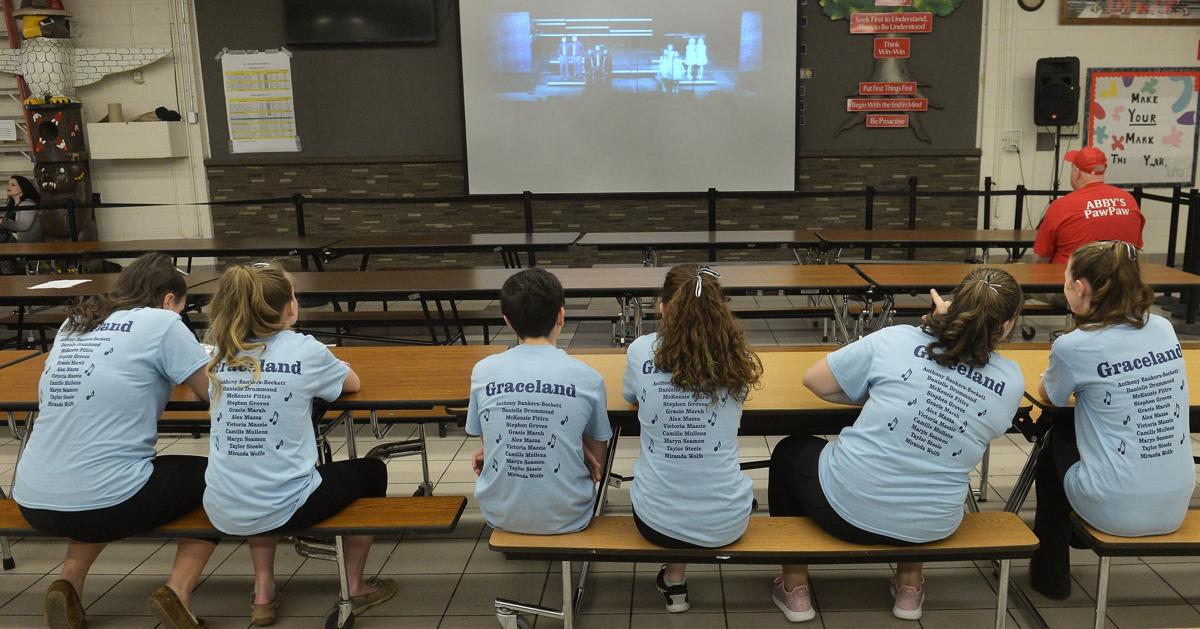 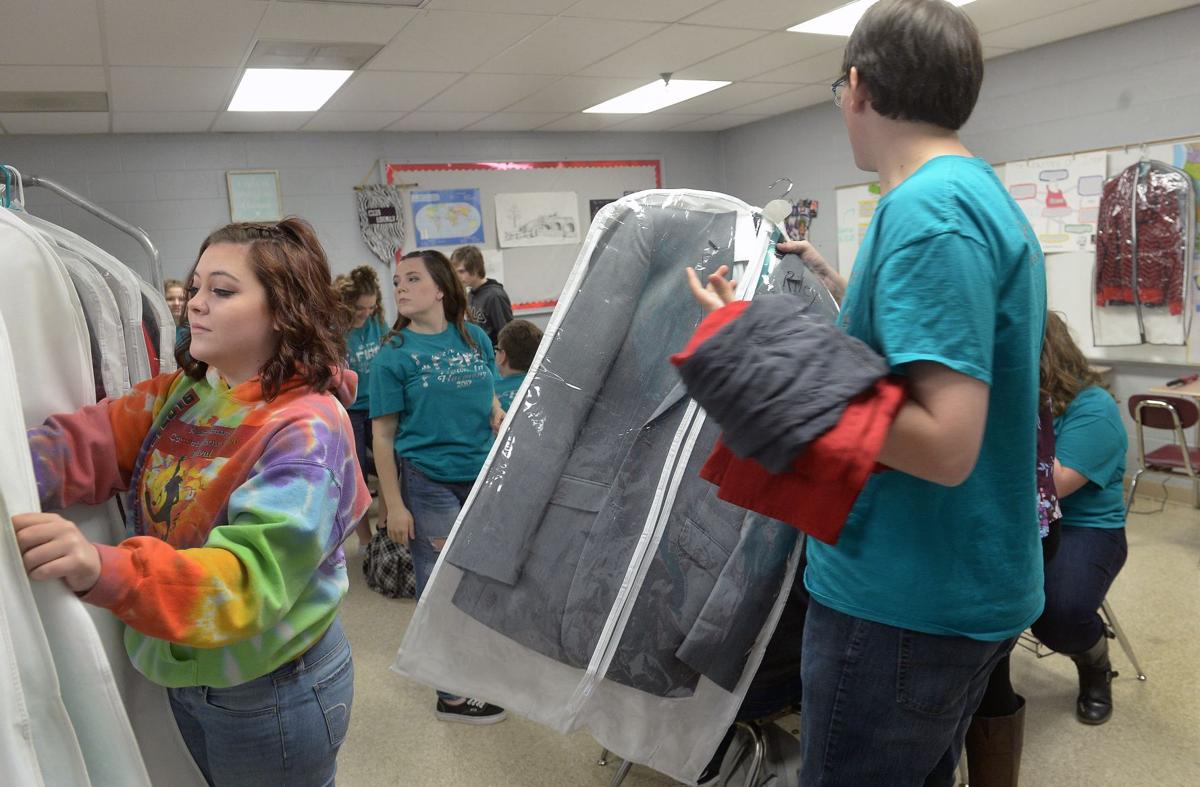 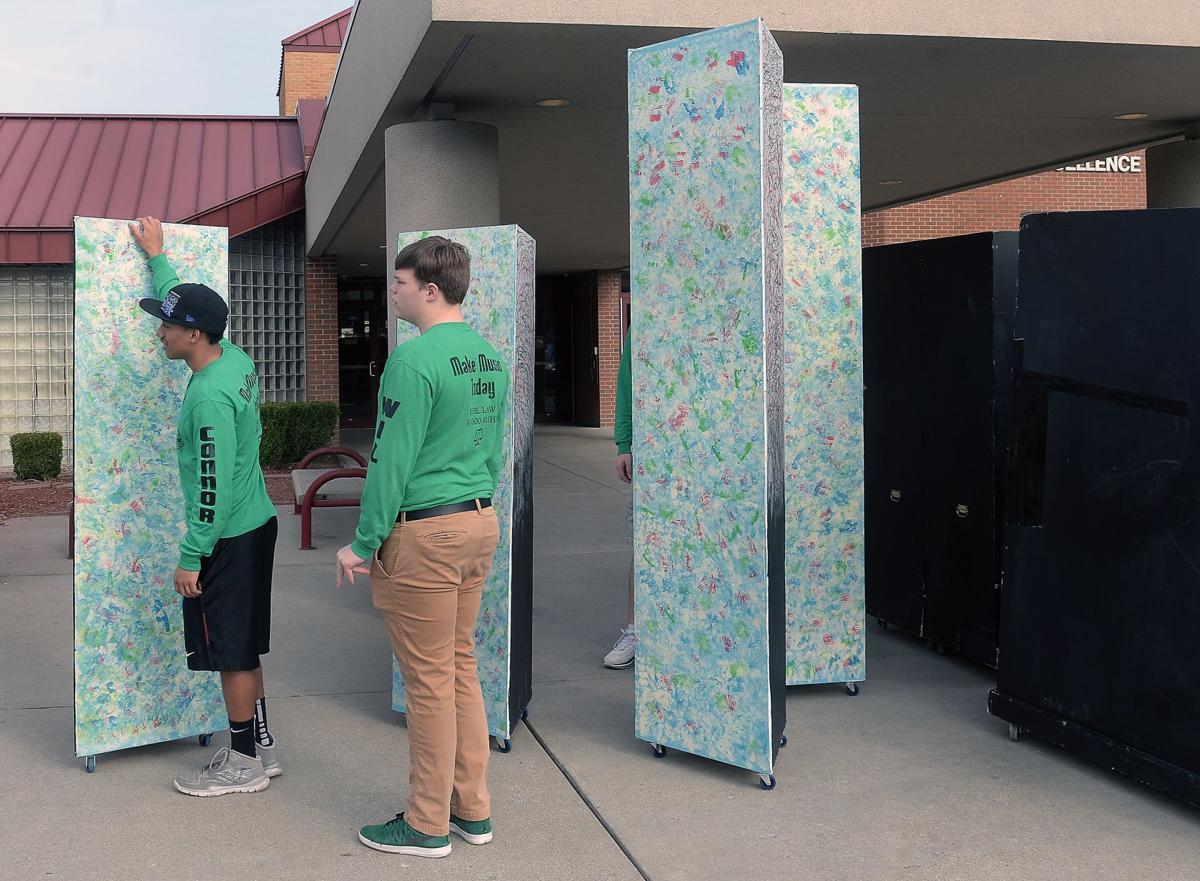 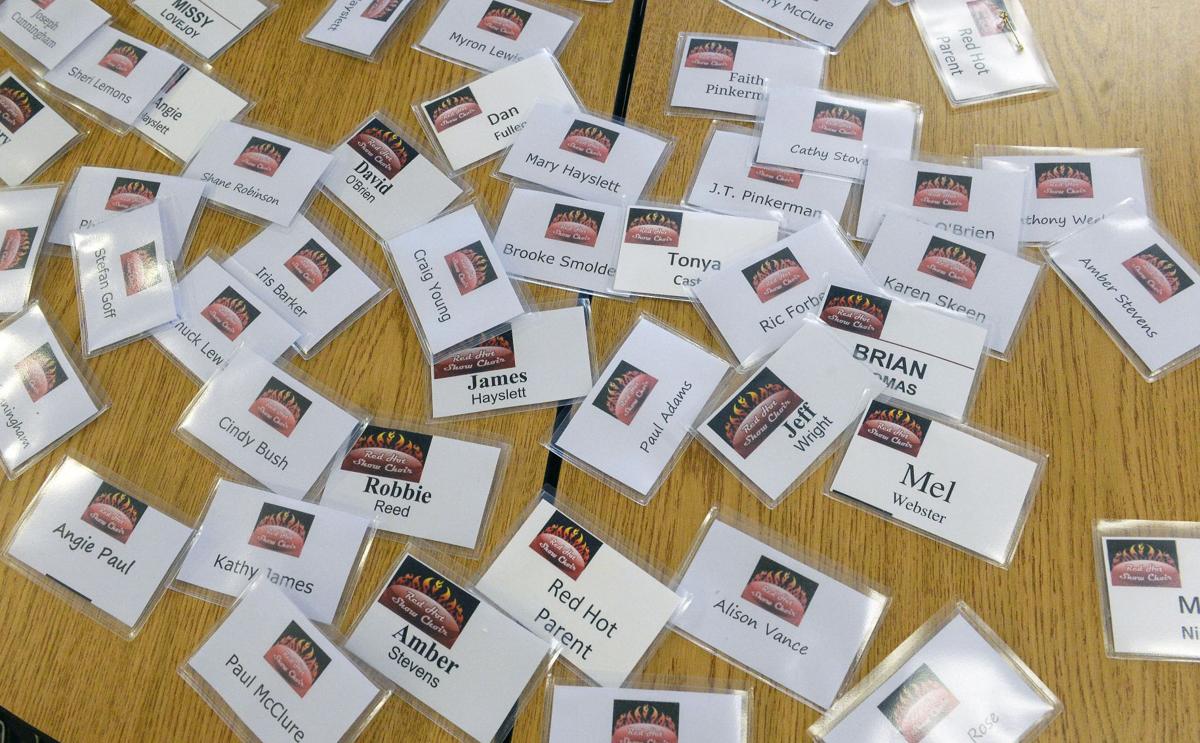 The Nitro Sophisticats put the final touches on their makeup at Hurricane High School during the West Virginia State Show Choir Festival.

Alex King, a member of the Buffalo Show Choir band, tunes his stringed instruments as he waits in the wings for his time on stage during the West Virginia State Show Choir Festival.

Stage hands get the sets ready before an act hits the stage during the West Virginia State Show Choir Festival.

For some, it’s about winning.

Like many things in life, high school show choir is what you make of it.

After seven years, show choir has been a career for South Harrison High School senior Cassidy Riley. At the West Virginia State Show Choir Festival on March 24 at Hurricane High School, classmates, friends and family swarmed her after she was awarded a trophy for Outstanding Female Soloist.

This is something she had been waiting on since middle school.

Being the lone voice on a stage isn’t new to her.

“I’ve always been a performer, so there’s a certain amount of electricity involved with performing and doing performance arts,” she said. “I’ve been in show choir for seven years now, and I’ve had multiple solos, but there’s just this undeniable feeling of nervous, anxious, but very, very excited and just wanting to perform. That’s all it is. It’s that burning desire to be on the stage all the time.”

Her school’s group, Hawks in Harmony, performed “The Power of Winning and the Agony of Defeat.” The show displays the separation between winning and losing and how you can overcome obstacles, she said.

An obstacle no more, Riley shared her victory in photos with friends, trophy in hand.

Before winners of each division were announced, the 18 high school choirs each had similar routines before performance time.

The start of their day was determined by performance and travel time.

The group arrived in Hurricane at night March 24 and woke up around 6 a.m.

When Musselman found its designated room at the school, it had down time before members needed to worry about changing into their costumes. They touched up their makeup, commented on each others’ hair and took selfies using the West Virginia State Show Choir Festival geofilter on Snapchat, made just for the occasion.

Their director, Megan West, informed them they would be performing in a gym instead of an auditorium. This meant the vocalists needed to project their voices, or sing stronger and louder.

Once they were dressed and ready, they went to the warm-up room to go over vocal exercises, scales and tricky parts of the show.

After that, it was show time.

Over the course of two days, Hurricane High School hosted 26 different school show choirs, the most the State Show Choir Festival has ever seen.

“We had over 2,000 students and over 2,000 spectators over the course of two days,” said Joseph Kincaid, West Virginia State Show Choir Chairman and Hurricane High School director.

Each choir was given 25 minutes on the stage, including set-up and tear-down production time.

The judges look at three main categories in competition: vocals, visual performance and overall presentation. Some components within the categories are execution, originality, choreography, tone, phrasing, transition and flow.

Within their music medleys, students get the chance to shine with solos, duets and trios. Adrenaline is fueled by nerves.

Bridgeport High School sophomore Alexis Queen sang the start of “Hello” by Adele as a solo.

“I was really nervous at first because I knew I was going to be on stage alone for the first part of ‘Hello,’ so I was just, like, ‘breathe in, breathe out,’” she said. “Our show choir director in middle school taught us the paper airplane throw exercise.”

As she explained the exercise, she mimicked holding and throwing a paper airplane as her breath matched the movements.

After Bridgeport’s Main Attraction choir performed its show, “Rock of Ages,” Queen said she felt better about the performance than at a previous competition.

“We had a lot more energy this time,” she said.

Joshua Taylor, senior at Nitro High School, said he joined four years ago because he loved singing. Add dancing, and it sounded fun, he said.

“There’s a lot of nerves and a lot of excitement,” he said.

When it’s time to perform, the hardest part is starting, he said. The rest comes naturally, and the performers can feed off of each others energy.

“All the nerves just go away, and it’s a rush of excitement,” said Nathan Cain, a freshman with the Nitro High School Show Cats.

The show choir season is limited to a handful of shows a year for most schools. The mix of gaining performance experience, making friends, learning from other groups and getting feedback from a panel of judges is reason enough to participate without a guaranteed win.

For the first time ever, Musselman High School had an all-female show choir. It used that to its advantage, performing a medley of women-empowerment tunes, such as “Hair” by Lady Gaga, “Dear Future Husband” by Meghan Trainor and “The Voice Within” by Christina Aguilera, among others.

Maddy Murphy, Winfield High School senior, made the decision to join show choir when she was in middle school and saw the high school group perform.

“It looked like magic to me,” she said. “The way they moved onstage, and the singing was beautiful, and the costumes were pretty. I loved to sing, and it just looked like something I wanted to be a part of. It just fit.”

Haught, Winfield’s director, writes the music and lyrics for his choir. He said it is the only show choir in the world that performs original music.

“It’s relevant to the kids,” he said. “We talk about things that they connect to. I call them my little sermons. They’re just sort of ways of dealing with issues that are contemporary in a musical world. We’re not all about the trophies. We’re all about giving a message to the audience. We compete to win, and we play to win, but what’s important and what makes us different is that we tell a story about things that are relevant.”

Their show this year is themed around anxiety. Past themes have been fear, social media and goal-setting.

Bridgeport High School’s director, Robin Bohn, also emphasizes to her students that the performance is not for them alone.

“It’s my hope that they not only do this for the trophy, but they do it for the enjoyment of being together and that they’re giving something to others as well,” she said. “It’s not just about music for themselves and getting a trophy out of it. It’s about presenting a show that people can enjoy and get into and share in music with everybody.”

While strong vocals and smooth dance moves make a good show choir, it’s the dedication and support that separates the good from the great.

“The dedication of students and parents and the support of teachers and a great staff makes a great show choir,” Kincaid said.

Hurricane has competed in seven contests this year throughout West Virginia, Ohio and Indiana. They swept the top awards at six of them.

The Hurricane Red Hot choir’s show is titled “Ghost” and shares a similar storyline to the musical and movie. The show features songs such as “Afterlife” by Avenged Sevenfold, “Ghost” by Ella Henderson and “The Other Side” by Bruno Mars, among others.

“I told them to go out there and not compete against the other schools, but focus on improving amongst themselves,” Kincaid said.

Whether they left with new hardware or not, students spent the day with others just like them. They relate to each other through music. They understand the courage it takes to get on stage and perform. They appreciate and respect the passion behind it. Though in competition with each other, everyone cheers for everyone.

“Every group — it doesn’t matter how big or how small — every single kid in the group puts it onstage for evaluation by an audience,” Haught said. “It’s not just for the judges but for evaluation by the audience. The courage that it takes to do that is remarkable.”