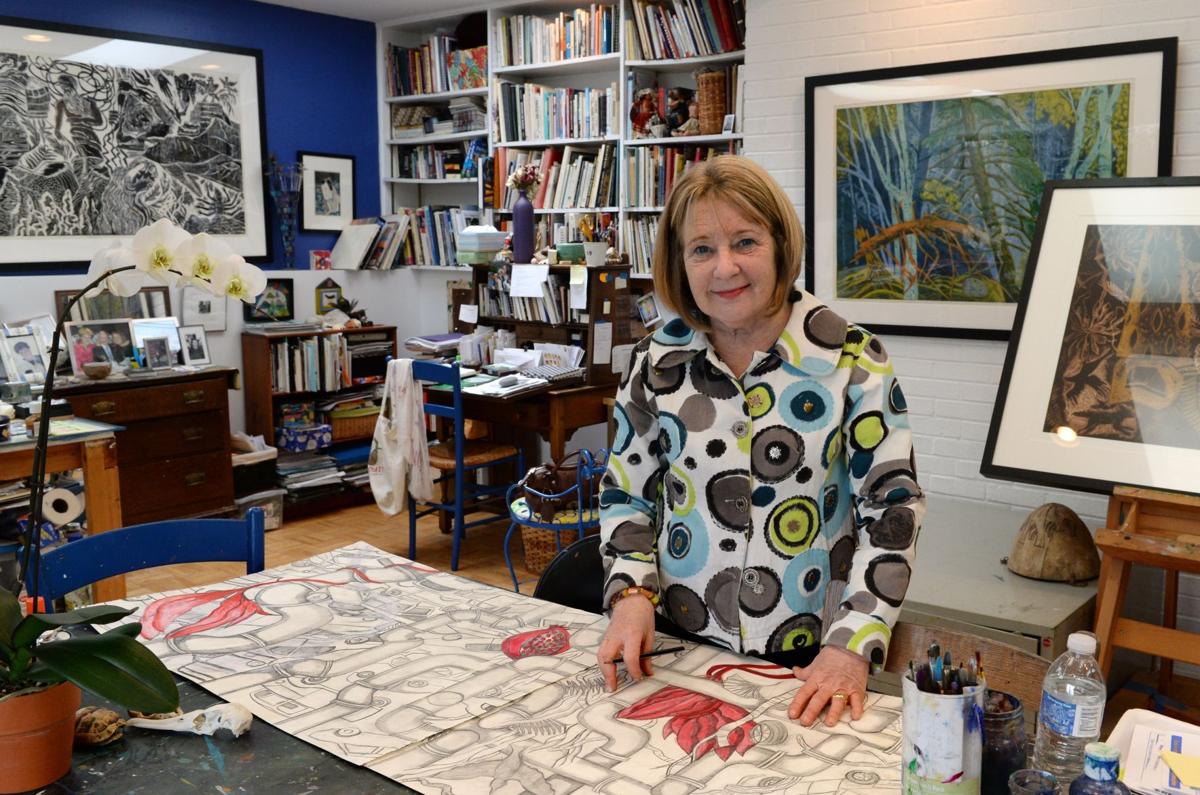 Charleston Artist Barrie Kaufman is a recipient of a 2014 Governor’s Artist of the Year Award. Her paintings, carved wood prints and sculptures are often inspired by the natural beauty of West Virginia. 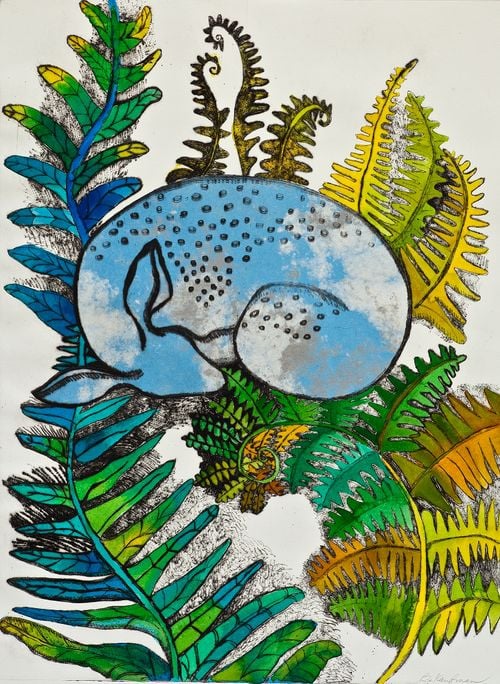 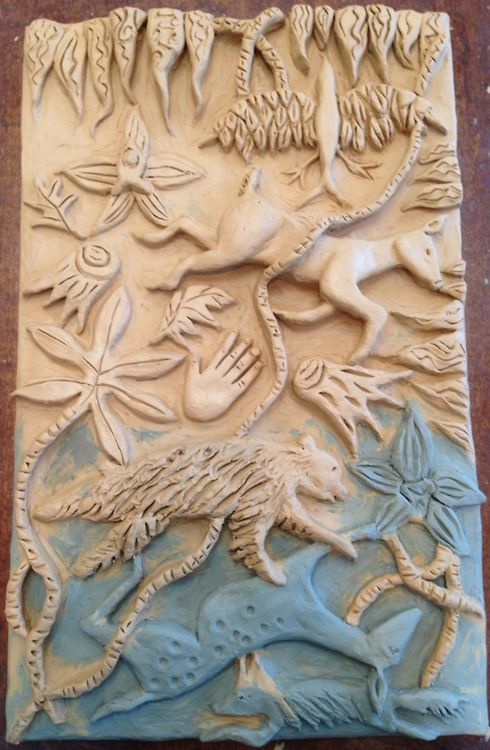 A clay mold was created by artist Barrie Kaufman before the glass cast was made for the sculpture.

Charleston Artist Barrie Kaufman is a recipient of a 2014 Governor’s Artist of the Year Award. Her paintings, carved wood prints and sculptures are often inspired by the natural beauty of West Virginia.

A clay mold was created by artist Barrie Kaufman before the glass cast was made for the sculpture.

CHARLESTON, W.Va. — Barrie Kaufman’s selection as a West Virginia Division of Culture and History 2014 artist of the year surprised her, perhaps because her art often focuses on nature and the need to protect it — something West Virginia’s nature lovers are often at odds with the governor about.

“A recognition by the state of my art makes me feel very honored,” she said in a recent interview.

The award was presented as part of the biannual Governor’s Arts Awards on March 13, and is the latest in a long string of prominent recognitions for Kaufman.

Last year, she received the Award of Excellence in the West Virginia Juried Exhibition and was honored with a Curator’s Choice exhibit at the Huntington Museum of Art.

Living in West Virginia, she said, is very conductive to her work as an artist: “Anywhere you turn, there are beautiful forests within walking distance.”

Despite her affinity for West Virginia — or perhaps, because of it — she is well known in art circles around the globe. Her work has been featured at art exhibits and won awards in Taiwan, Australia, Sweden, Canada and throughout the United States.

“I spend — in the summers — a lot of time in nature. I notice plants and trees, and nature speaks to me. My work now is about striking a balance between the natural world and the man-made world and finding a balance we both can live with. We are out of balance now, and we are really harming the natural world. Sometimes my work is very pointed. I want my work to make people think about it,” Kaufman said.

She is currently working on several paintings featuring — to her amazement — water pipes.

“My new painting theme is pipes. It came to me in a dream. ‘Why,’ I wondered, ‘pipes?’” After pondering it, she understood it was the Charleston-area water contamination crisis that was in her subconscious and being realized in her art.

She believes her art is her “God part expressing.”

“I knew as a child that art is what I was supposed to do with my life. It’s part of who I am. I’ve always been an artist, and I always will be an artist. My work as an art therapist is about helping other people realize that about themselves. It makes you a more complete person to be able to express yourself,” she said.

Through art, Kaufman has helped child victims of abuse or trauma to heal. She has also encouraged hundreds of adults to unlock their creative passion through workshops she has held throughout the state. In addition, she offers art lessons to adults and children in her home studio.

Incredibly, she also finds time to be an art teacher at Mountaineer Montessori School — and has for 24 years.

“As children we are all artists, but it gets beaten out of us. I’m amazed at the art of children. Sometimes parents don’t value art, but I try to tell them there are so many careers in art. It’s a vast field.”

“It’s great to have a mentor for young people. For adults, I feel if you have a mentor, you can see how to be a successful creator, but it takes some risk-taking. You have to create your own path. It’s joyful,” she said with a smile.

Two of Kaufman’s adult art therapy students are featured artists at Capitol Conference Center, 815 Lee St., during this month’s ArtWalk, April 17. Don Ashworth and Tara Roush will be displaying paintings, drawings and cards for the event.

Her promotion of creative risk-taking is something she practices and doesn’t just preach — she recently completed an intensive five-week art study of cast glass in Zelezny Brod, Czech Republic, where glass has been produced since the 11th century. Among the challenges she faced during her time there is that she does not speak Czech, the primary language of the area.

As a result of this new passion, she will reveal in September at the Clay Center for the Arts and Sciences, a large — 5 feet tall — columnar glass sculpture she cast during her art studies in the Czech Republic.

“I was working in relief and I got a picture in my mind of a large pillar with these animals on top of each other — polar bears and other animals — with melting ice — and I said it has be in glass. I felt I had to make the piece. I felt glass was very beautiful and translucent. I had something I needed to say about global warming. It’s about the vanishing animals and I wanted it to have a translucent look. I was very passionate about it, and it took about a year for me to create it. It was a work of love, really,” she said.

“I had never done glass art before — it was kind of scary. Now I like working with glass and I want to do more pieces,” she said.

Examples of Kaufman’s contemporary artwork can be found at barriekaufman.com.

Her art also can be viewed in select public collections, including those at Cabell Huntington Hospital, the Clay Center, the Huntington Museum of Art, Marshall University Graduate College, the University of Charleston, the West Virginia State Museum, and Marietta College.

Nina Denton Pasinetti also was named a 2014 artist of the year by Gov. Earl Ray Tomblin. For a complete listing of winners of this year’s Governor’s Arts Awards, visit wvculture.org/news.

Man kills 6, then self, at Colorado birthday party shooting

Why are businesses having trouble finding employees?