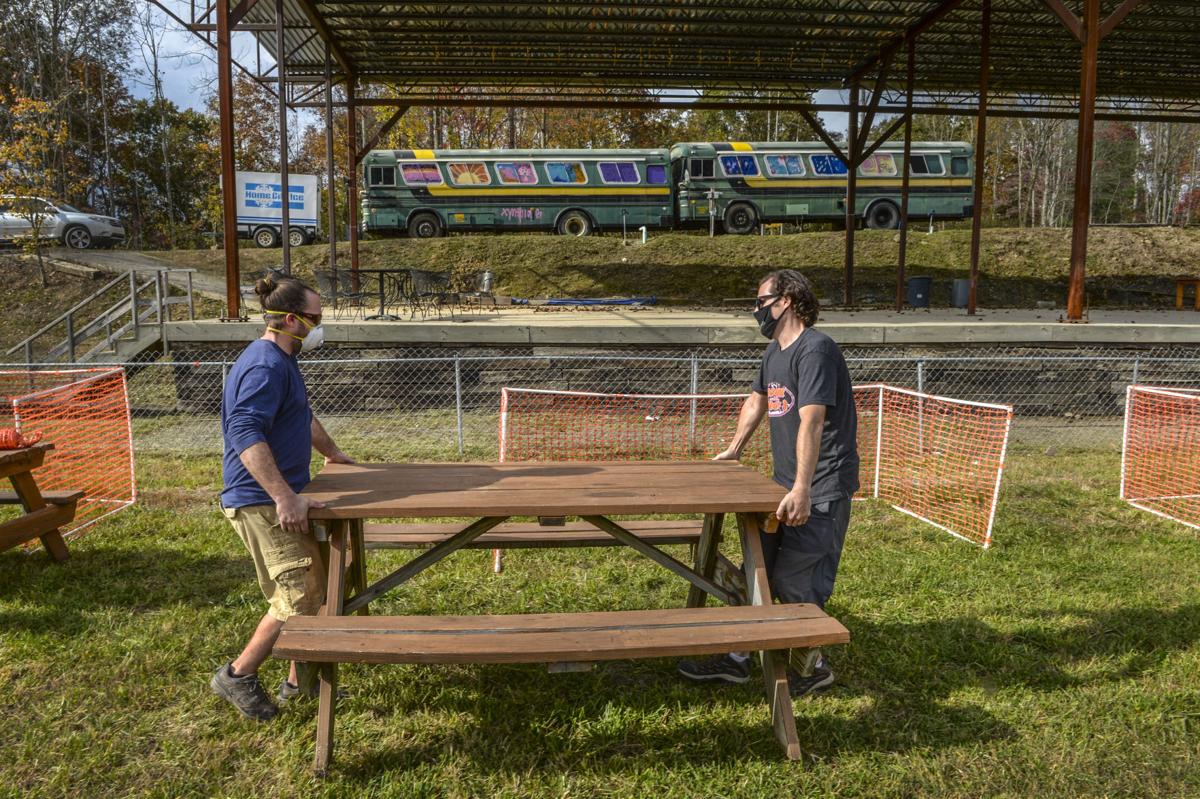 Making even an outdoor concert viable during the COVID-19 pandemic requires more work than usual. At ACE Adventure Resort, they’re setting up PVC and netting “pods” bordered by picnic tables as part of the measures to create safe social distancing during the upcoming Halloween show on Oct. 31. 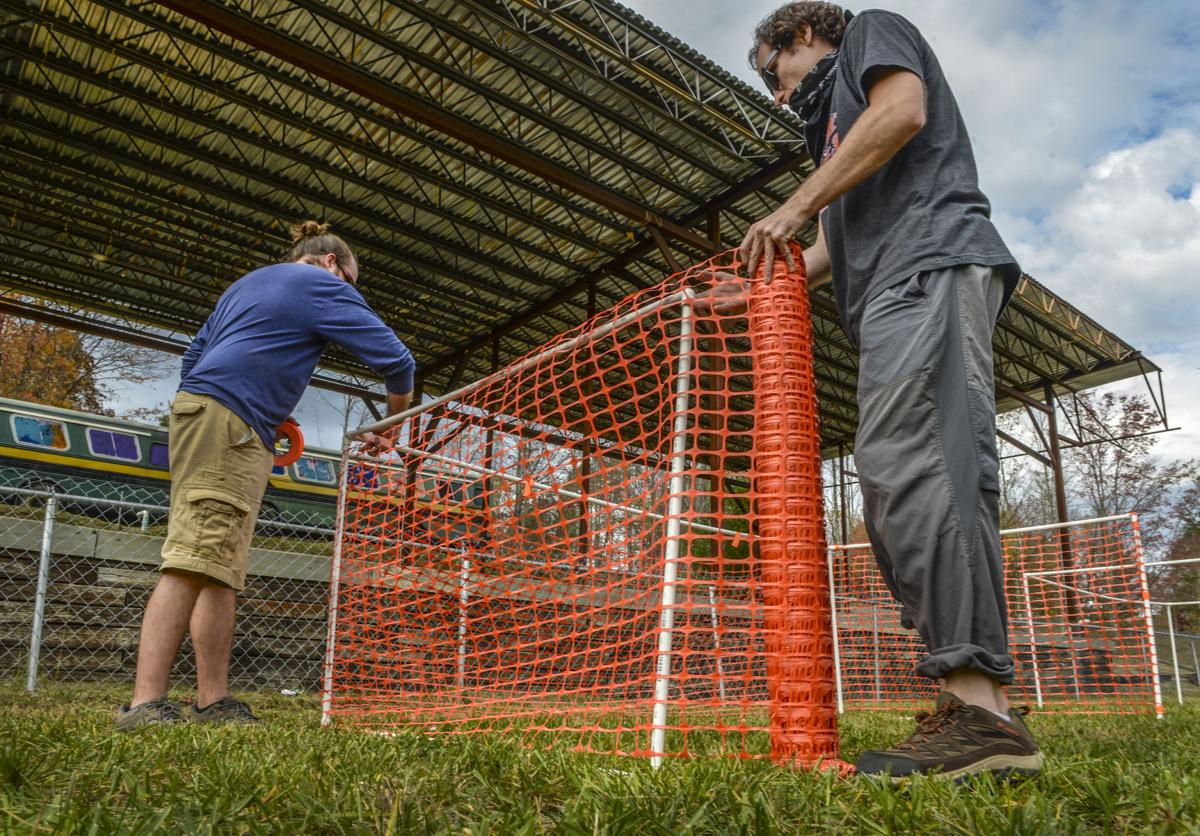 Colby Jennings (left) and Adam Payne build “pods” for a Halloween concert at ACE Adventure Resort, in Oak Hill. The pods are meant to help ticket-holders socially distance while enjoying the music.

Making even an outdoor concert viable during the COVID-19 pandemic requires more work than usual. At ACE Adventure Resort, they’re setting up PVC and netting “pods” bordered by picnic tables as part of the measures to create safe social distancing during the upcoming Halloween show on Oct. 31.

Colby Jennings (left) and Adam Payne build “pods” for a Halloween concert at ACE Adventure Resort, in Oak Hill. The pods are meant to help ticket-holders socially distance while enjoying the music.

For Payne, a talent buyer for the 123 Pleasant Street performance venue in Morgantown, the pods were part of the process of keeping people safe for its upcoming Halloween concert Oct. 31.

“We’re keeping people together and reducing exposure. You’ll go in your pod, and that’s where you’ll need to stay,” Payne said. “We’ll have servers coming around. The beer will come to you and everybody stays safe.”

At least, he said, they’re trying.

After a long break, live music is again being heard in the mountains. Live concerts, which were forbidden in the early stages of the pandemic, are now allowed, albeit under specific circumstances.

It’s not a total lifting of restrictions. There are no shows on the horizon for the Charleston Coliseum, the Clay Center for the Performing Arts or at the corner bar — but some concerts may be held outside.

Outdoor performance spaces are limited to 25% capacity or a total of 250 attendees, whichever is less.

There’s also a slew of rules, many of which mirror what restaurants are observing. Staff members must be screened for symptoms as they report for work. Social distancing between attendees has to be reasonably maintained, and contact between guests and the staff is to be minimized.

Putting on a show during the pandemic requires more work, but Payne said he and others are willing to do it just to get West Virginia musicians back to work.

“West Virginia was really behind other states with this,” he said. “Other places opened up a lot more for music earlier and put together plans. It’s been really hard for the music industry in West Virginia.”

As the state began allowing high school and college sports, and tourism activity such as whitewater rafting, Payne said, the music community thought allowances for some music also might be made, but they weren’t.

“That seemed really unfair to us,” Payne said.

This led to the formation of West Virginia Bands Together, a group of musicians and local music industry people that lobbied state government officials to set guidelines that would allow musicians to play.

“We called the Governor’s Office every week,” Payne said.

Progress was slow. At the end of September, the group announced an Oct. 3 protest in Morgantown.

The day before the protest, Gov. Jim Justice acknowledged the complaints and suggested that an announcement about lifting the music ban was coming soon.

The protest went on as planned, and Justice released guidelines for concerts the following Monday.

As soon as he knew what specifically had to be done to put on a show, Payne announced the Halloween performance at ACE. Plans for the concert had been in the works for weeks, with bands in a holding pattern, awaiting confirmation to go forward.

“He’s really blown up since COVID,” Payne said. “He had the No. 2 streaming show, right behind the Grand Ole Opry with Brad Paisley and Carrie Underwood — and they’re superstars.”

Since the concert at ACE Adventure Resort was announced, a few more music events have sprung up, including “Hollerween 2020,” on Oct. 30, at The Bucket in Dunbar, which recently built an outdoor concert area.

Under different circumstances, this kind of show at ACE Adventure Resort would draw several thousand people. Payne said they’re selling 200 tickets, starting at $160 for a pair, which includes a picnic table and a campsite for the evening.

Other packages are for groups of four, six and eight people.

The price is higher than usual, but Payne said he had to bring in more staff and build the pods from scratch.

If things go well, he said, he’ll reuse the pods for later shows.

“We all think we’re going to be living with COVID for a while,” he said.

There might not be many shows in the immediate future. With cooler temperatures moving in, opportunities for outdoor events likely will dwindle until the spring.

Payne said he and others are still working on a path forward to get music back into clubs and restaurants. He has a plan for 123 Pleasant Street that includes streaming live performances with local bands and using Zoom meetings to provide interaction. That will come later, though.

In the meantime, Payne is headed out on the road with Saxsquatch after being hired as the performer’s tour manager.

Two weeks out, Payne said the Saxual Heal-O-Ween show at ACE Adventure Resort is at 70% capacity. If restrictions had been lifted or concert guidelines set a little earlier, Payne said, the show likely already would have been sold out.

“I had guys tell me, ‘Man, we totally would have done this,’ but we made plans just a couple of days ago,” Payne said, “Halloween is always kind of a risk for artists. There’s always so much going on.”

For more information on the show or to purchase tickets, visit saxsquatch.com.

One Month at a Time: Finishing up a month with ukulele and moving on

Biden takes the helm, appeals for unity to take on crises

4 ways to refresh and reset this New Year's

Are Americans smart about their wireless service? [Infographic]