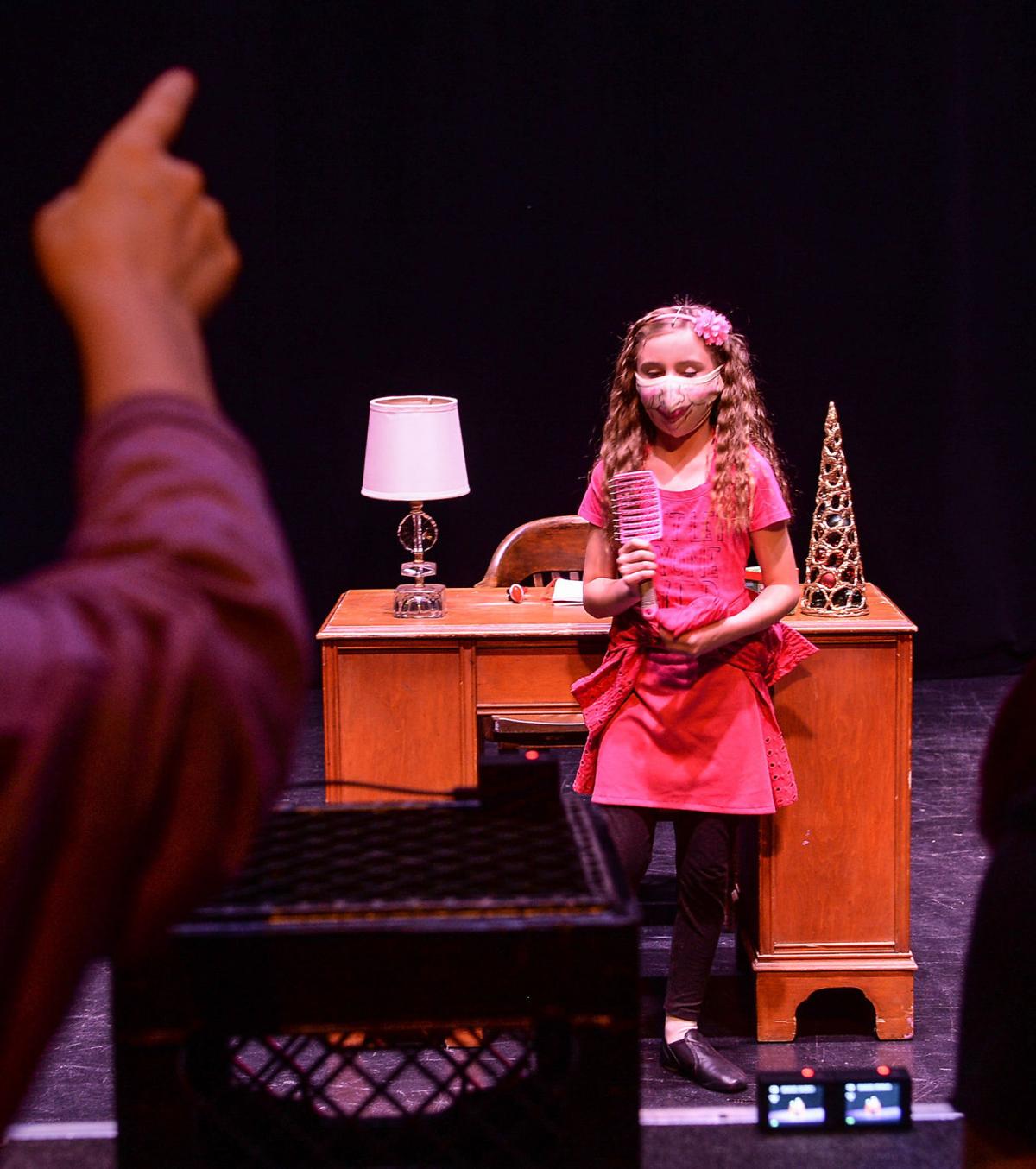 Ava Isner sings with her hairbrush in the taping of the Children’s Theater Christmas video at the Clay Center. 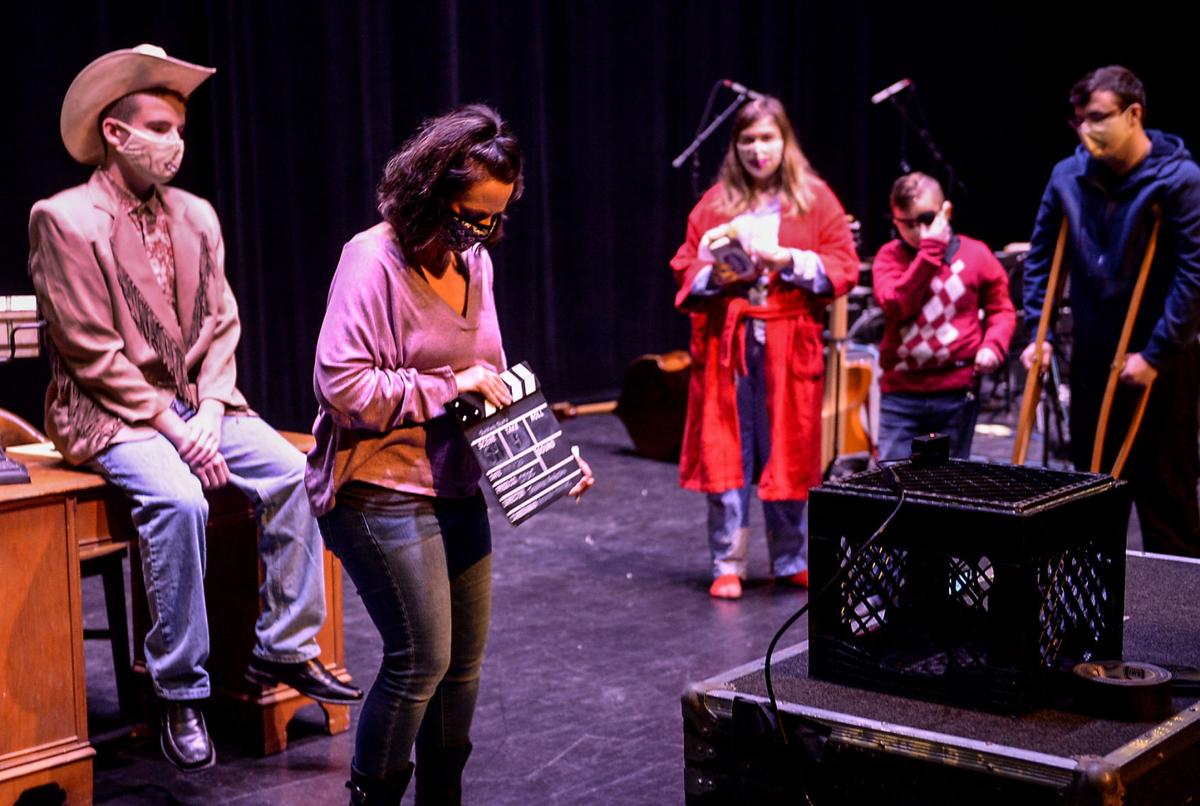 Assistant Director Natasha Allen announces a new take as they video a scene for Children’s Theater. 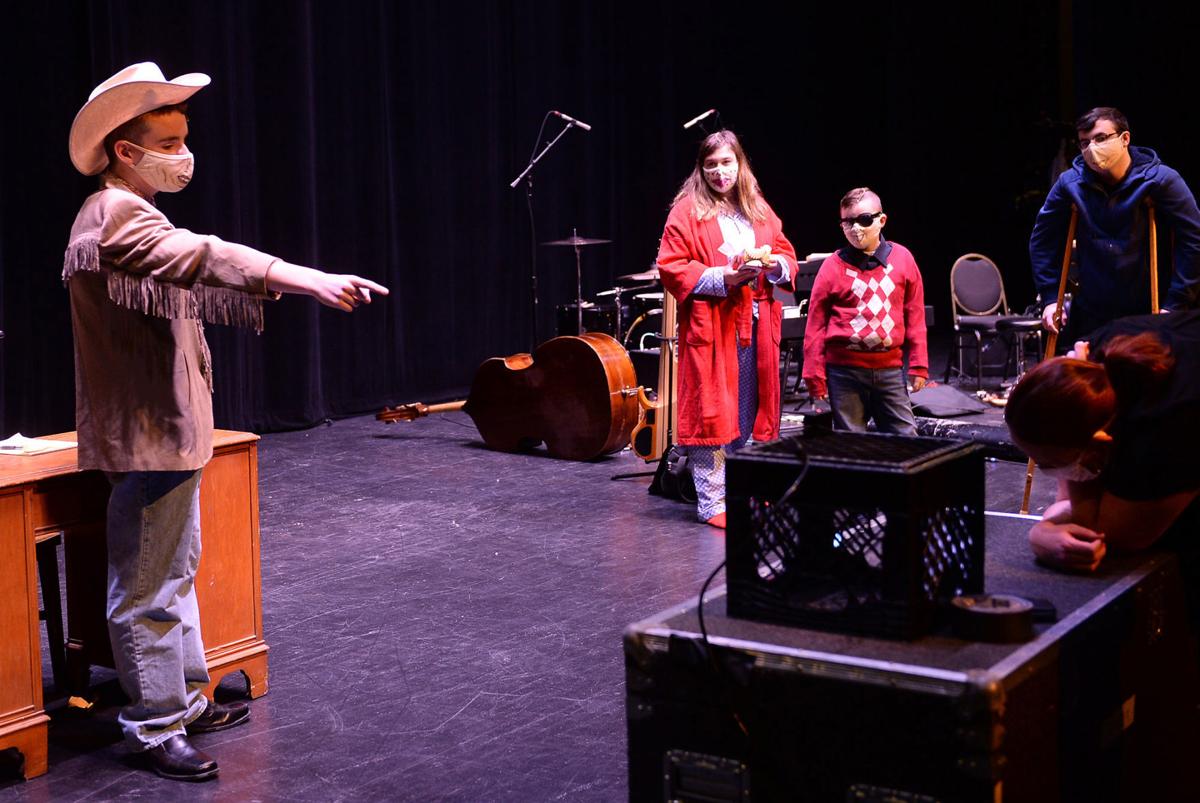 Ethan Hodge points to the video camera as Arianna Deel, Aiden Bowen and Aeson Stuck wait to make their entrance onto the scene. 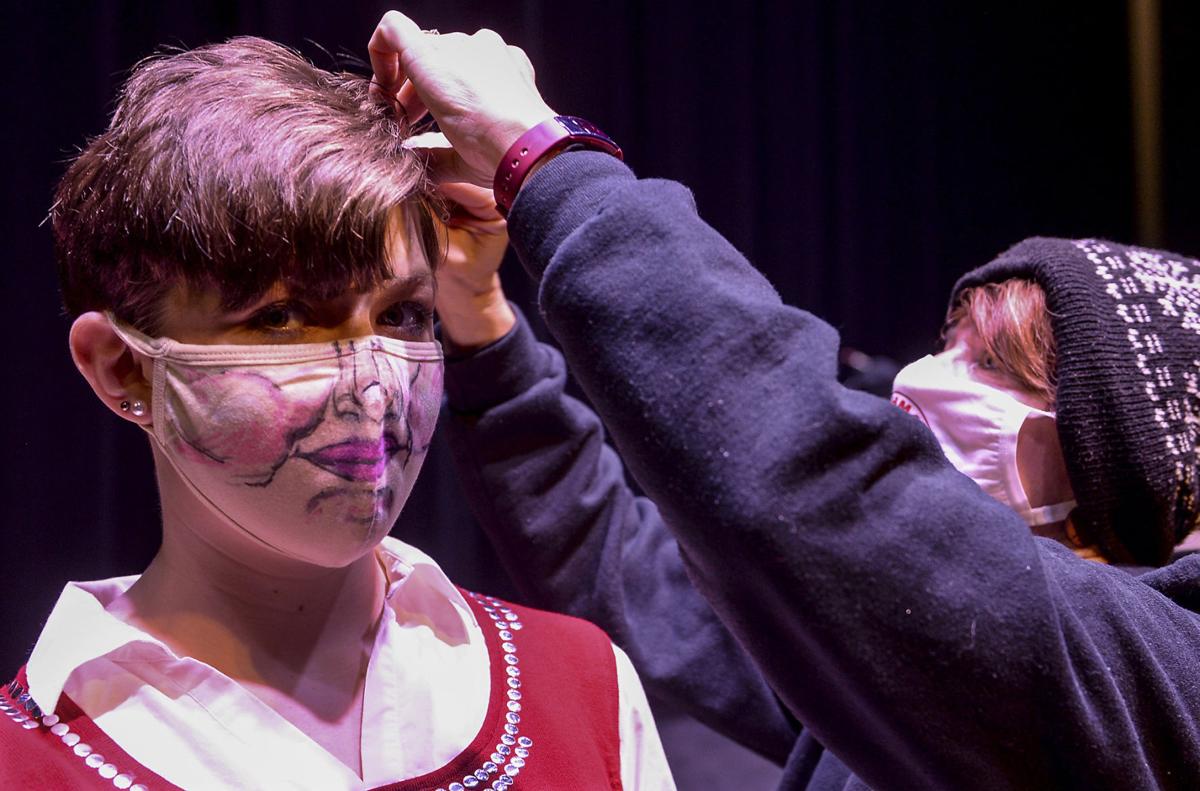 Ava Isner sings with her hairbrush in the taping of the Children’s Theater Christmas video at the Clay Center.

Assistant Director Natasha Allen announces a new take as they video a scene for Children’s Theater.

Ethan Hodge points to the video camera as Arianna Deel, Aiden Bowen and Aeson Stuck wait to make their entrance onto the scene.

This week, Children’s Theatre of Charleston opens their “Christmas Shorts” show, which will be available for streaming Friday and Saturday and then Dec. 18-20.

The show is a collection of holiday skits and Christmas music featuring the largest cast since COVID-19 shut live theater down in the state.

“We had to really think about things before we got started,” director LeeAnne Rheinlander explained.

What the staff of Children’s Theatre knew was that medical experts were saying COVID-19 cases would likely rise as it got later in the year and people spent more time indoors. Also, the coronavirus would likely spike following Thanksgiving, with people traveling to see family and the onset of the holiday shopping season.

What nobody knew for sure was how bad it might get, so they chose a show without big scenes or musical numbers.

“That way smaller groups could come in to rehearse instead of having the entire cast show up,” Rheinlander said.

The government directive has been to keep gatherings under 25, but CTOC was able to cast 29 actors.

They just weren’t all in the building at the same time.

“We’re getting really good at that,” the director said.

Costumes for the show were measured at home by the children’s parents. Show costumers Kit Reed and Mandy Shirley put together the costumes and then did quick adjustments for the fittings. There wasn’t a lot of the usual going back and forth.

Actors were responsible for the upkeep of what they wore on stage. Cast members were issued laundry baskets in their dressing rooms where they were to keep costumes. Each laundry basket would contain one costume.

“The kids were in charge of cleaning and wiping down their laundry baskets every night,” Rheinlander said. “We didn’t go in there and do it for them. They were responsible for it on the first day.”

Some actors had multiple roles, which meant caring for a stack of baskets.

And everybody wore masks during the show.

“Kit was very creative,” Rheinlander said. “She made custom masks for every kid, which was a lot of masks. Some kids played three different characters.”

There was also social distancing and plenty of hand sanitizer.

CTOC took precaution after precaution, but they wanted to make everything as safe as they could to allow them to do things few other theater companies were doing, like playing music and singing.

There were even a couple of kids who could play ukulele.

“But again, we kept it small,” she said. “Kids performed solo or in small ensembles. There’s a duet and a couple of trios.”

They sang with masks.

And then the whole thing would be filmed. The technical crew, which normally handles lights and sound for a CTOC show, became the camera crew.

Laughing, Rheinlander said, “We all kind of stepped up and were doing things we’re not used to.”

They filmed the Christmas show the week before Thanksgiving, weeks before the production would be available for people to see.

With people likely traveling to visit family over the holiday, Rheinlander said they didn’t want to run the risk of exposing each other to COVID-19.

“We didn’t want to be part of the spread,” she said.

Children’s Theatre worked hard, went to a lot of trouble and got their show done early, but Rheinlander said it was worth it — for the kids.

Theater is an important outlet for many creative children. It gives them a place to channel their energy, focus their attention and theater is a community.

“When we had auditions in early October, we turned kids away,” she said. “We cast 29, but we had more than 50 audition. There are a lot of talented kids.”

Rheinlander promised that they had come up with a fun show and a good Christmas show for a particularly troubled holiday season.

“The kids are always great,” she said.

And even if they don’t have a live audience, Rheinlander said they were sending the show out to schools all over West Virginia.

“Normally, we have over 2,000 kids see one of our school shows,” she said. “We’re doing educational packets for teachers and sending the show out for free to schools. Our view is that it’s very important for kids to experience live theater.”

“It’s not just for the players,” the director added.

What comes next, Rheinlander wasn’t entirely sure. CTOC hoped to do another show in the spring, but what that show might look like was anybody’s guess.

“We were going to do ‘Beauty and the Beast,’ a full-scale musical, but there’s no way to do that now,” she said. “We might get creative or do another fairy tale. We’ll have to see how things look in another couple of months.”