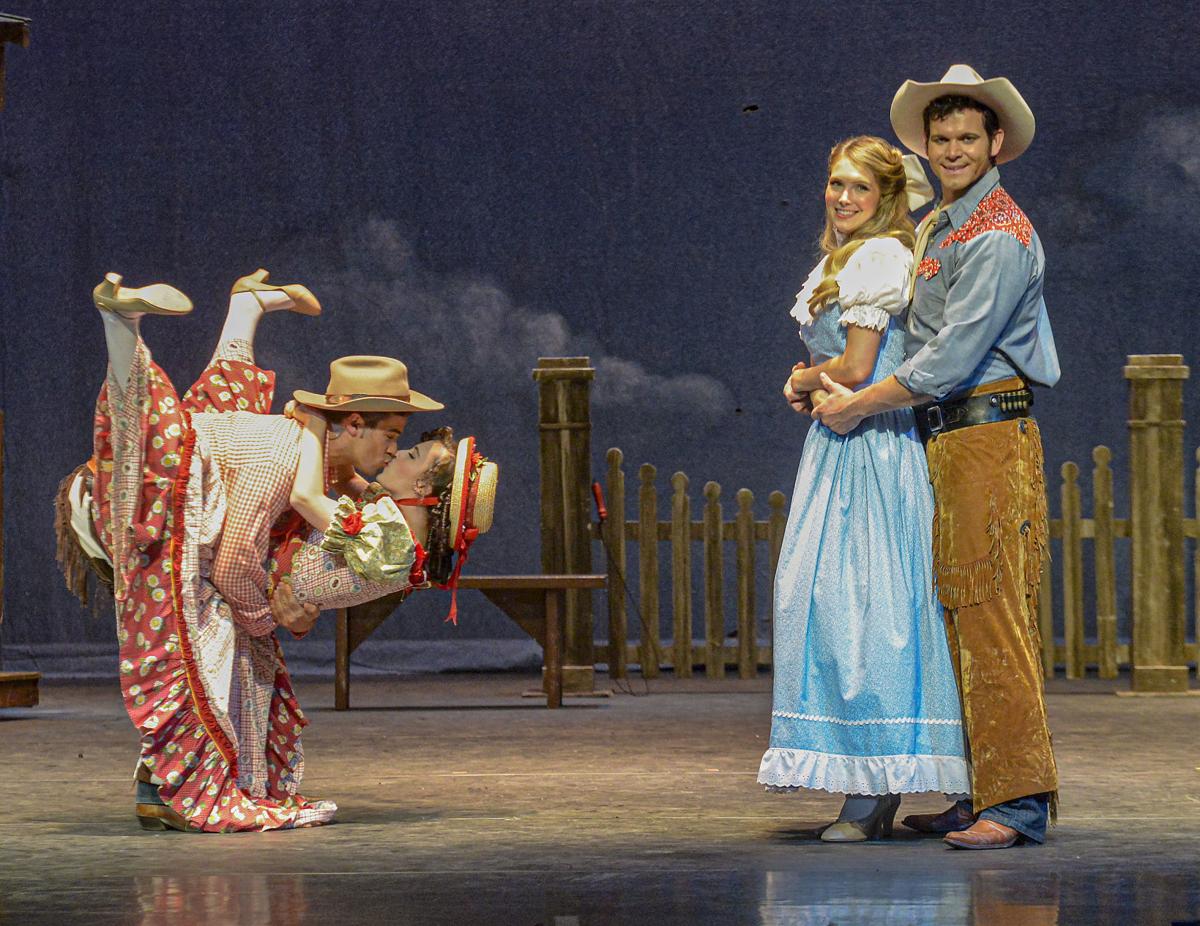 The current cast of Charleston Light Opera Guild’s production of “Oklahoma!” The guild is celebrating 70 years and will host a special show and gala Saturday at the Charleston Coliseum & Convention Center Little Theater. 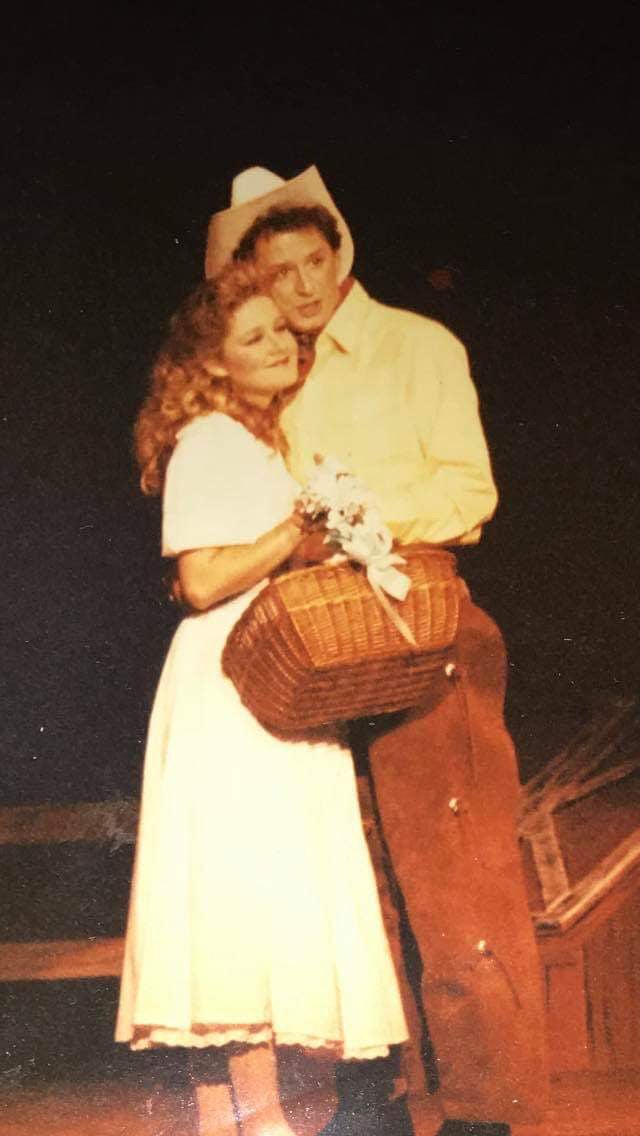 Rebecca Robbins (left) played Laurey in the guild’s 1990 production of “Oklahoma!” and returns Saturday for a special cameo appearance in the 2019 show. 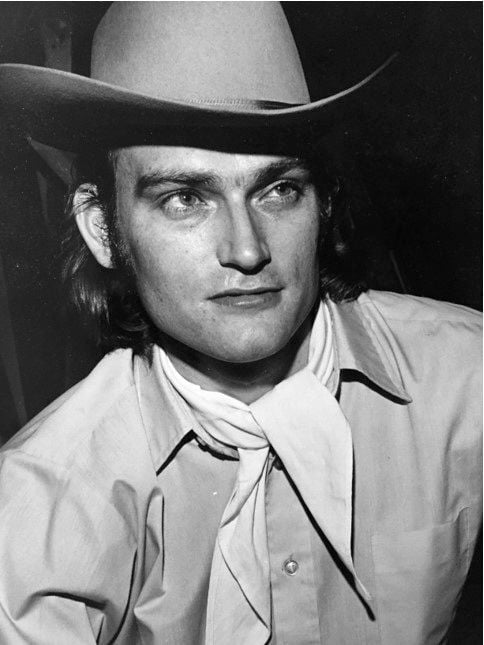 Gary Brown, who has appeared in many local theater productions, got his start with the Guild 50 years ago and played Curly in the 1970 production of “Oklahoma!” He returns to the role Saturday as part of the Charleston Light Opera Guild’s gala celebration at the Charleston Coliseum & Convention Center’s Little Theater.

The current cast of Charleston Light Opera Guild’s production of “Oklahoma!” The guild is celebrating 70 years and will host a special show and gala Saturday at the Charleston Coliseum & Convention Center Little Theater.

Rebecca Robbins (left) played Laurey in the guild’s 1990 production of “Oklahoma!” and returns Saturday for a special cameo appearance in the 2019 show.

Gary Brown, who has appeared in many local theater productions, got his start with the Guild 50 years ago and played Curly in the 1970 production of “Oklahoma!” He returns to the role Saturday as part of the Charleston Light Opera Guild’s gala celebration at the Charleston Coliseum & Convention Center’s Little Theater.

Nina Denton Pasinetti isn’t entirely sure who is coming and who isn’t.

Sitting in the Guild theater on Tennessee Avenue in Charleston with a scrapbook full of pictures and memories on her lap, the longtime Guild director and choreographer worked through the names of who she knew was coming, who said they might come, and who wanted to come, but probably couldn’t make it.

She seemed to have kept in at least loose contact with a lot of them. Some she thought were too far away. Others were in poor health. They wanted to come, they’d said, but Pasinetti wasn’t sure.

The Guild’s most famous member, Jennifer Garner, likely wouldn’t be there.

“Jen just started a new film,” Pasinetti explained and then sighed. “We had a good turnout for the 50th.”

She thought maybe people thought celebrating 50 years was more meaningful than 70, but it wasn’t to her.

The gala would be a great time to swap stories between the old and new members of the Guild or with fans of local theater. There are always plenty of stories. Each new show mints a new epic, but Pasinetti was trying not to worry too much about what kind of crowd would come out.

Regardless of whether anyone else thought 70 years was special, Pasinetti thought it was. The show the Guild is currently doing, “Oklahoma!” is special.

“It changed Broadway musicals and it changed the way the Guild did shows,” she said.

The musical ushered in six decades of modern musical theater. While Saturday’s gala celebrates the history of the Guild, it also pays tribute to the show.

Along with food, drinks and the reminisces, the matinee performance of “Oklahoma!” will include cameo appearances by some of the actors who were part of the 1960, 1971 and 1990 productions, who are returning to step into the roles of the characters they played for a scene or two here and there.

Pasinetti said, “I thought about matching everyone with the people they worked with in those other shows but then thought better of it.”

The current cast has rehearsed for months. The returning veterans, not so much.

“It seemed like it was safer to match them up with someone who’s doing the show now, in case there’s any trouble they can help get them through it,” she added.

Little trouble is expected, she said, though the director thought it might not be the smoothest performance. Just the same, several of the returning performers, like Gary Brown, have done so much community theater they could probably run through their roles in their sleep.

Brown played Curly in the 1971 production. He was on stage when a couple dancing in the hoedown scene went over the side of the stage and fell into the orchestra pit.

“The conductor missed a beat maybe, but then picked it right back up and we went on,” he said.

A few others, like Rebecca Robbins — who played Laurey in the 1990 Guild production that also included Garner — went on to have careers in theater.

Robbins has been on Broadway and in touring shows, but lately she has been doing a lot of concert work as a vocalist.

“I remember Laurey was my first big role on a big stage,” she said.

The previous year, she’d had a small but notable part in the Guild’s production of “A Funny Thing Happened on the Way to the Forum.”

With Robbins now a working performer, the director felt a little vindicated.

The returning actors will be working with the current cast, including leads Adam J. Cunningham and Brynna Horswell.

The director said Cunningham was a wild talent with a great story.

“He’s a Florida attorney who was in town visiting family and came out for an audition,” she said. “Adam is just great.”

Horswell had a good story, too.

The actress lobbied Pasinetti for the Guild to do “Oklahoma!” for years.

“She told me Laurey was her favorite role, that this was her favorite show and that the Guild needed to do ‘Oklahoma!’” Pasinetti laughed and said, “As if I have the say over what shows we do.”

Guild shows are decided by the light opera Guild’s board, according to Guild president Scott Jarrell, though he added that Pasinetti was obviously part of the discussion.

Horswell acknowledged that yes, she was a fan of the show.

“I grew up watching it,” she said. “And I know it’s a little old-fashioned, but the whole thing is just amazing.”

A single mom of a precocious 3-year-old, Horswell said she did some theater with the Guild a few years ago, but she’d had less opportunity to audition, let alone join a show since becoming a mom.

“But when they announced the show, I knew I had to at least try,” she said.

Playing Laurey has meant a lot of juggling of schedules, she said, but it’s been a dream come true.

Pasinetti thought it was a great for the Guild, too.

“Brynna is great,” she said. “She’s stunning and looks like she belongs on a stage.”

Pasinetti said that a lot had changed since the days when Tom Murphy directed Charleston Light Opera Guild. People were different. They seemed a little more community-minded then but considered that might have been because of the time and what had come before.

“A lot of people had been in service. They were back from the war,” she said. “They weren’t looking to go be stars but wanted to be home.”

The Light Opera Guild director said they haven’t really lacked for talent, but that they’d had some good fortune.

“Over the past few years, we’ve had an influx of talented young women who’ve moved into the area or have never done theater before,” she said.

The additions have shored up casts and given Pasinetti more options in casting.

She still liked some of the older plays the best but acknowledged that people don’t always come out for them, like they do new productions, which are sometimes based on film and television properties.

“We’re grateful to have a very supportive community,” she said, but it was hard not to notice that the seats aren’t always filled.

“People have stopped attending shows,” she said. “It’s important that people do come to our shows or we’ll go out of business.”

Other theater companies have already faded away.

Brown and Robbins said Charleston Light Opera Guild was an important part of their lives. For Robbins, it was an early step that led to Broadway. For Brown, it was the first theater company he worked with after he came to the Kanawha Valley over 50 years ago.

The Guild gave Horswell one of her lifelong dreams and gave Cunningham a sense of pride.

“The Guild to me is the epicenter of the arts community for the area, maybe for the state,” he said. “When you act in a Guild production, you can expect great costumes, great sets and a music director. It’s not a sloppy production that’s just thrown together.”

Robbins added, “They do great productions. The quality of the shows is high by any standard. Charleston is lucky to have the Light Opera Guild. It’s lucky to have Nina Denton.”

WHERE: Charleston Coliseum and Convention Center