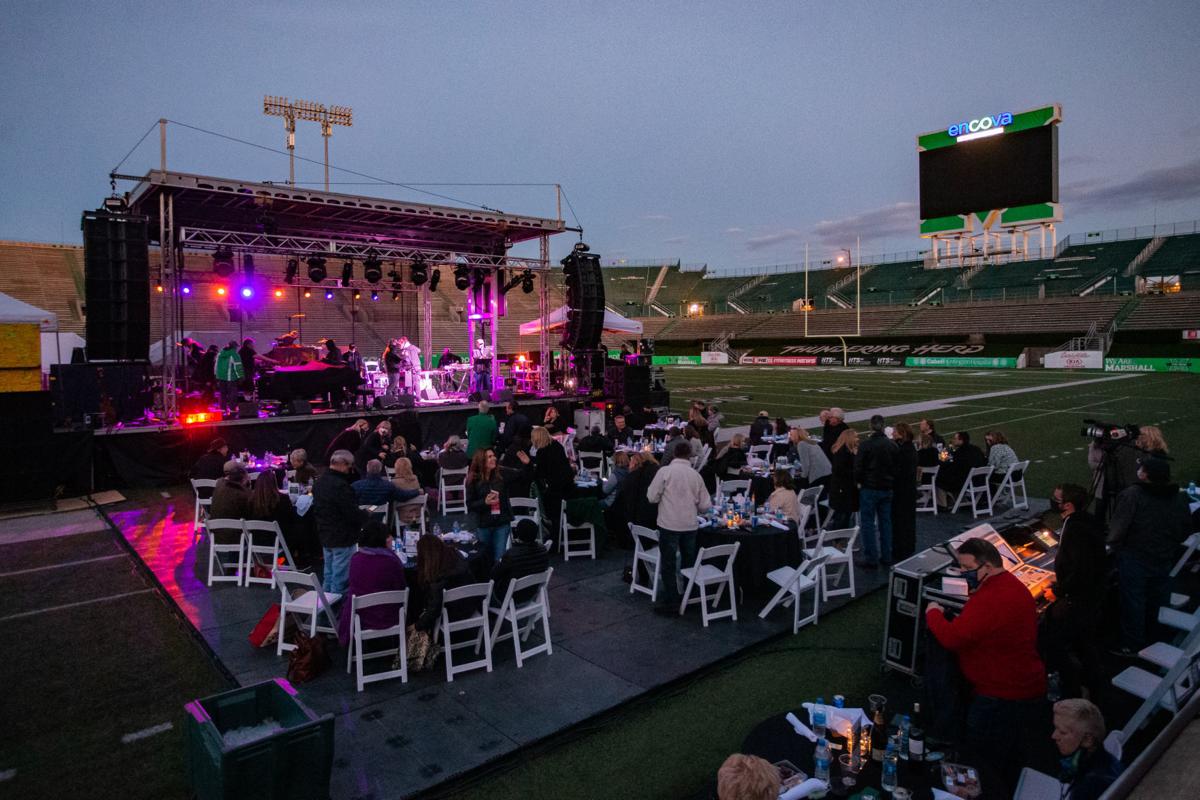 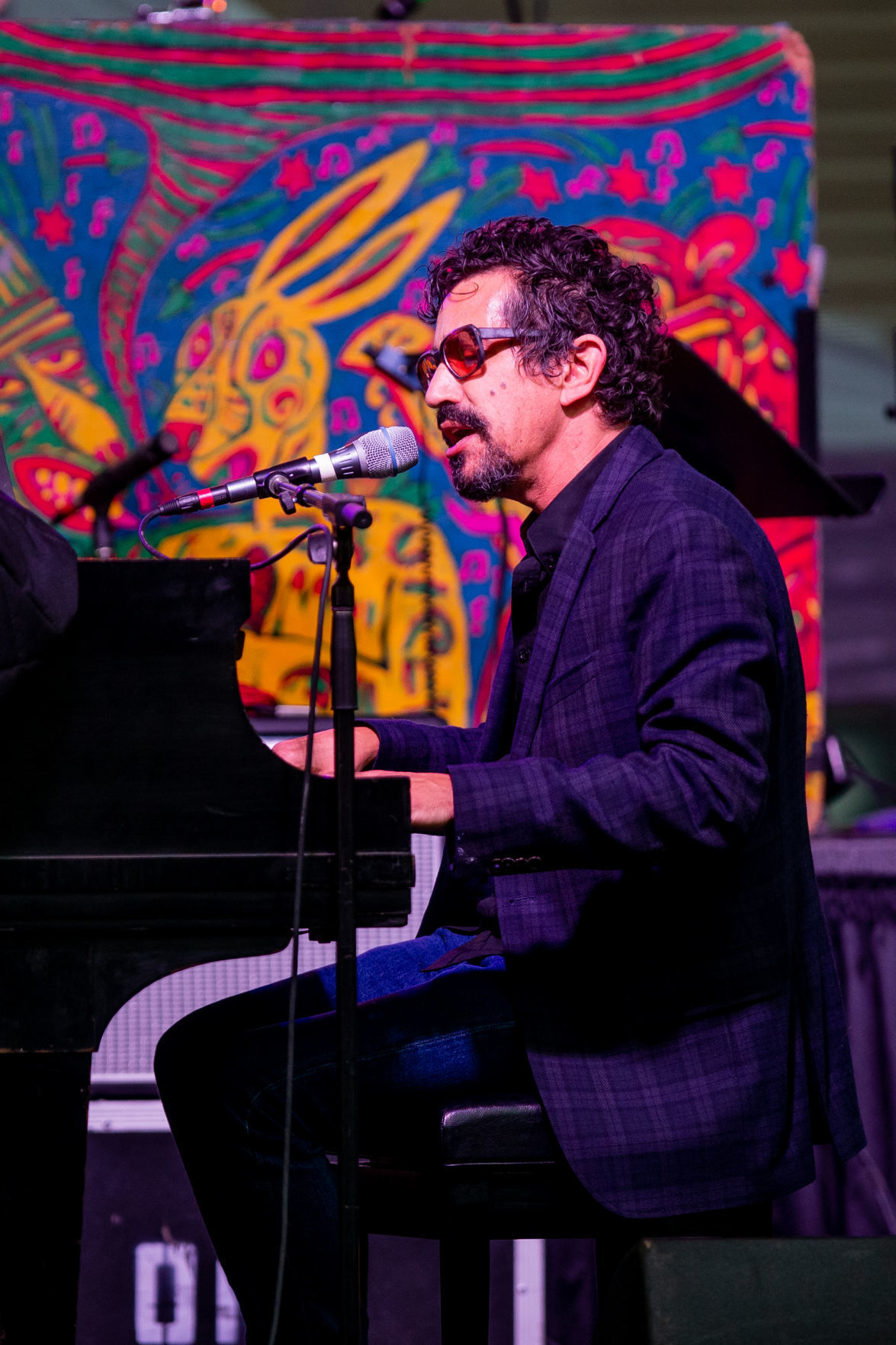 Musician A.J. Croce performs at Mountain Stage on Friday. Croce is the son of legendary late musician Jim Croce. The younger Croce performed one of his father’s best-known songs, “You Don’t Mess Around with Jim.” 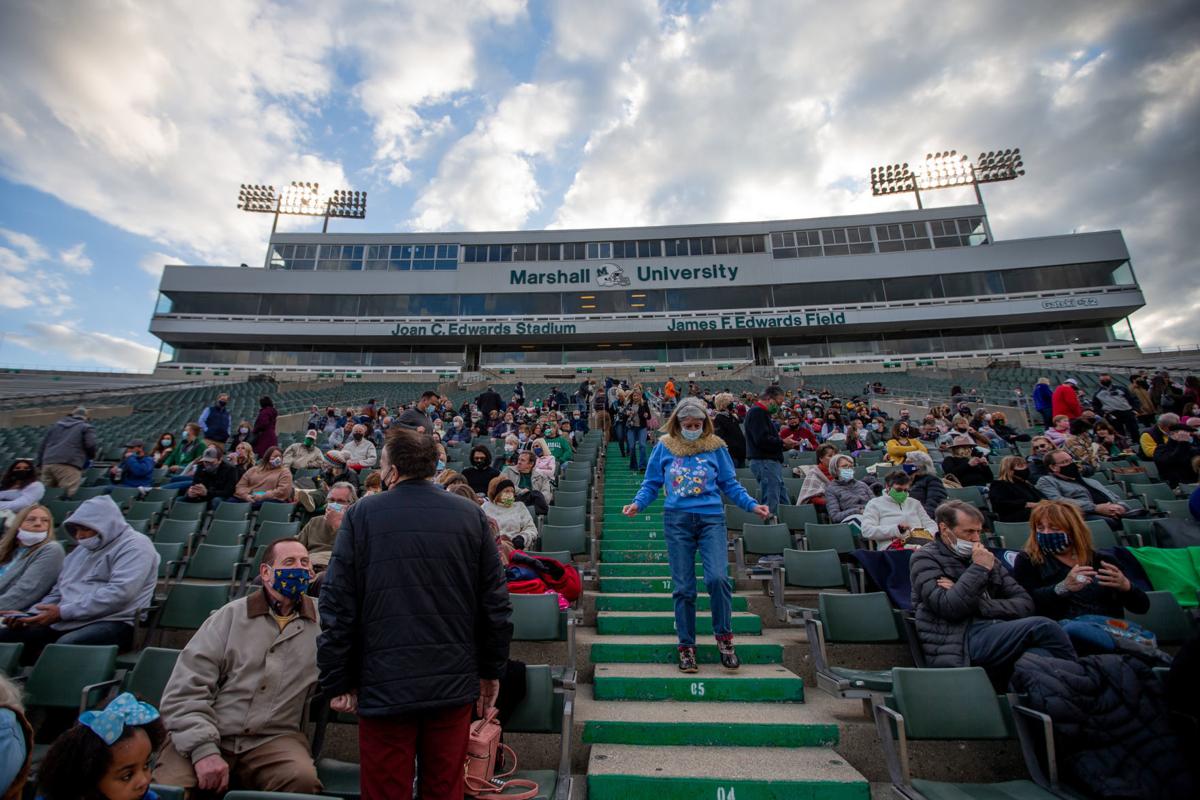 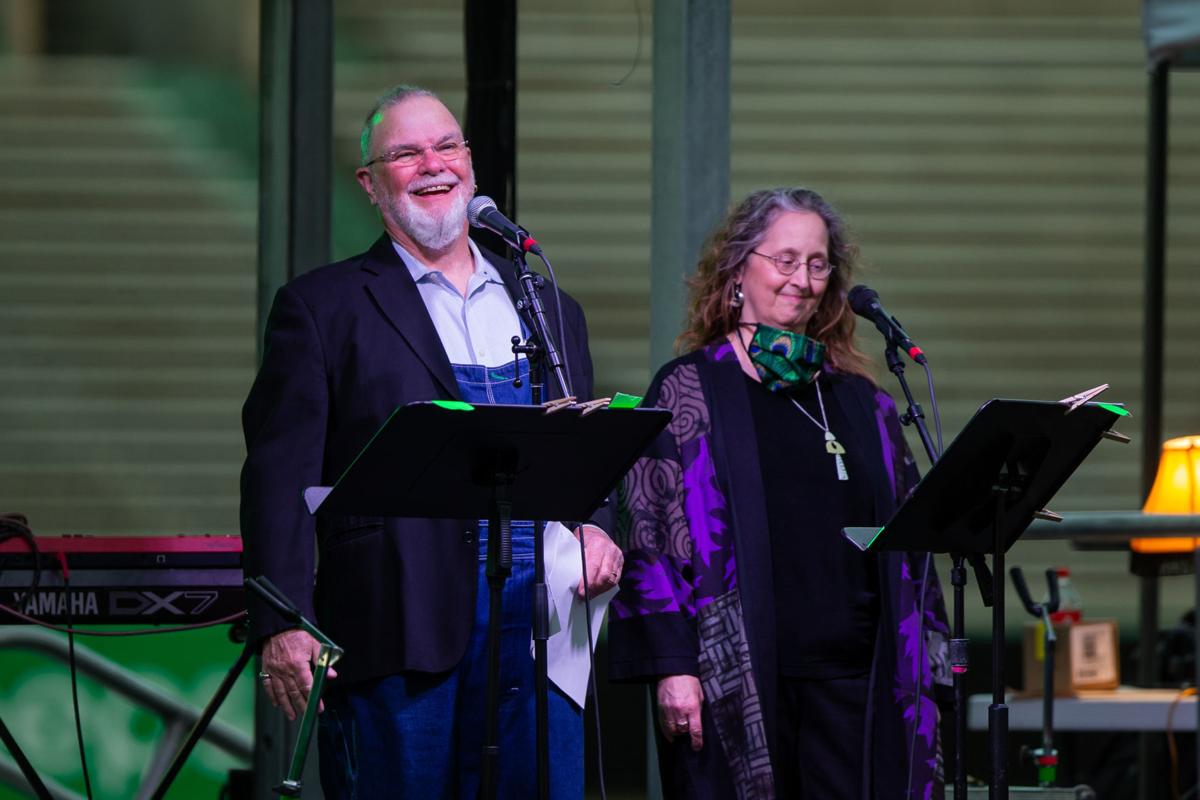 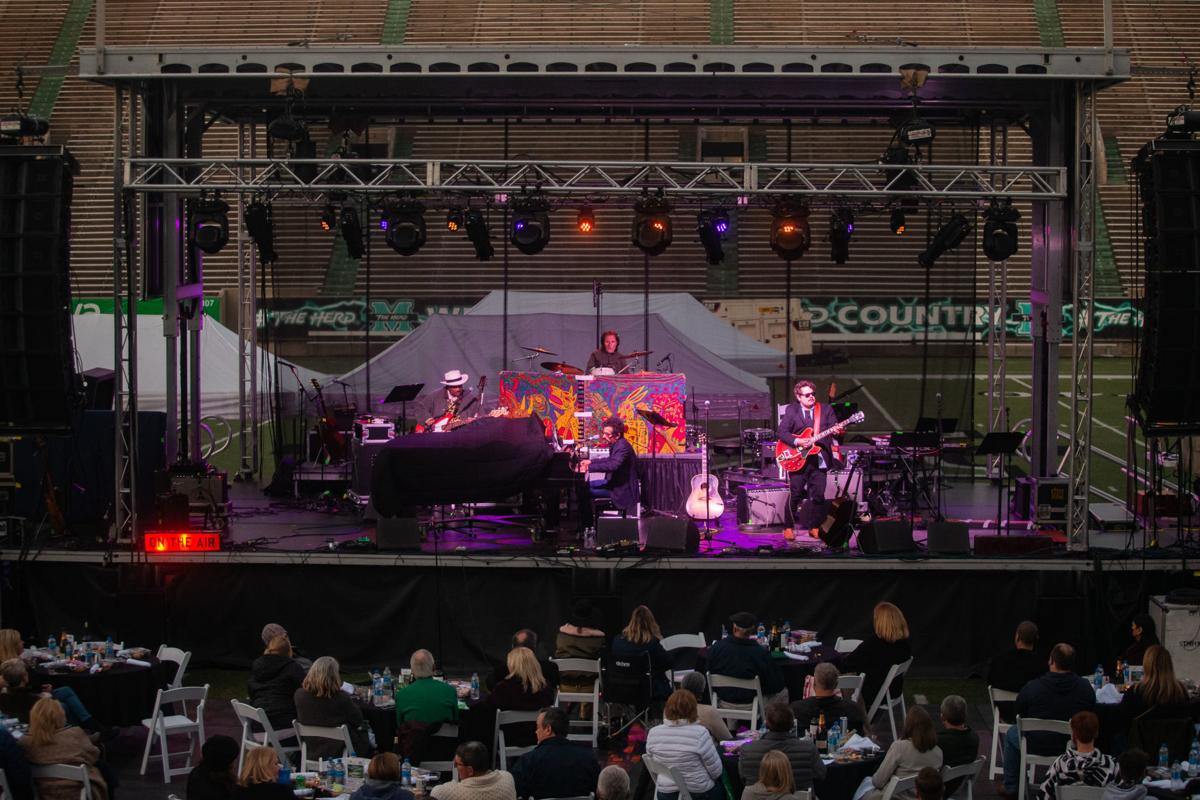 Musician A.J. Croce and his band perform together inside Joan C. Edwards Stadium during the Mountain Stage outdoor concert Friday in Huntington.

Musician A.J. Croce performs at Mountain Stage on Friday. Croce is the son of legendary late musician Jim Croce. The younger Croce performed one of his father’s best-known songs, “You Don’t Mess Around with Jim.”

Musician A.J. Croce and his band perform together inside Joan C. Edwards Stadium during the Mountain Stage outdoor concert Friday in Huntington.

HUNTINGTON — A lot could have gone wrong at Friday’s Mountain Stage show at Joan C. Edwards Stadium in Huntington.

Larry Groce, the host and artistic director for the radio program, said they knew they were taking on something very difficult when they made the decision in January to do the Marshall Artists Series show and be part of Huntington’s 150th anniversary celebration.

“We had to get people to commit, and a lot of artists weren’t ready to do that,” Groce said.

The show also was outdoors, which presented additional challenges.

Mountain Stage has done plenty of shows outdoors, but they don’t do them often and West Virginia’s weather — particularly at this time of year — is hard to predict more than a day or two out.

“There was always the chance that we’d get everyone here and get shut down,” executive producer Adam Harris said.

Announcements for the show said “rain or shine,” but that wouldn’t include hail, tornadoes, snow, lightning or flooding — any of which is possible during springtime in the Mountain State.

There was a lot to worry about, but Friday’s show went off with nary a hitch.

To be sure, the first Mountain Stage show in over 14 months didn’t look like the usual taping at the state Culture Center, or even like a show at the Keith-Albee Performing Arts Center, where the program usually performs when it comes to Huntington.

It looked more like a fall, football Friday night. About 1,500 music fans, some from several states away, came to the stadium dressed in layers. They wore jackets and wool hats and sat under fleece blankets to look at the cramped stage at midfield.

On the field, guests of the show, crew members and the occasional Marshall Artists Series sponsor posed with Marco, the Marshall University mascot.

The Mountain Stage band, dressed in coats and hats and the occasional scarf, milled around to keep warm as the temperature dropped.

“You want to think that the lights on stage will keep you warm, that it could be hot, but stage lights went to LED years ago,” Groce said. LED lights generate far less heat than traditional light bulbs.

The logistics involved with producing the show were considerable, Harris said. Not only did they have to set up the stage and staging areas for the performers and get everything wired to record the show, but they had to do it while sharing the field with the Marshall University football team.

Harris credited Joe Eddins and MPE Entertainment for making the show even feasible.

“We were always very aware that this was someone else’s house, and there was just a maddening amount of details to take care of,” he said. “We wanted to try and keep everybody happy.”

And the show seemed to succeed.

Fans were required to wear face masks to get into the stadium and to keep them on during the show. Performers wore masks when they weren’t on stage.

Most spectators seemed to go along with the guidelines, obeying the calls for social distancing and sticking with the groups they arrived with. There was plenty of going back and forth between their seats and the concession stands, but not much seat-hopping.

On the field, movement was more controlled, out of safety and over concern for the field.

Mark Dinaldo, of Richwood, said the last show he and his wife, Amy, attended was the final Mountain Stage show in 2020 before the pandemic.

Friday’s performance opened with A.J. Croce, the son of singer Jim Croce, who came out with “You Don’t Mess Around with Jim,” one of his late father’s best-known tunes and one very well-known within the stadium.

Hundreds sang along, setting the tone for an upbeat night of entertainment.

“I wasn’t sure how having a poet perform was going to go,” Groce said. “Poets aren’t best known for playing stadiums, but the response was really warm.”

Harris and Groce said they were happy with how the show worked out.

“We sold a lot of tickets,” Groce said. “We really didn’t know what to expect, but I think artists are eager to perform and people are just eager to get back to live music.”

The next Mountain Stage is tentatively scheduled for June 13 at the Culture Center Theater in Charleston. While details, including performers, are still being finalized, Harris said they are hoping to have some kind of in-person show.

As construction is completed on new homes, officials now say the challenge is tearing down homes destroyed, vacant from 2016 flood