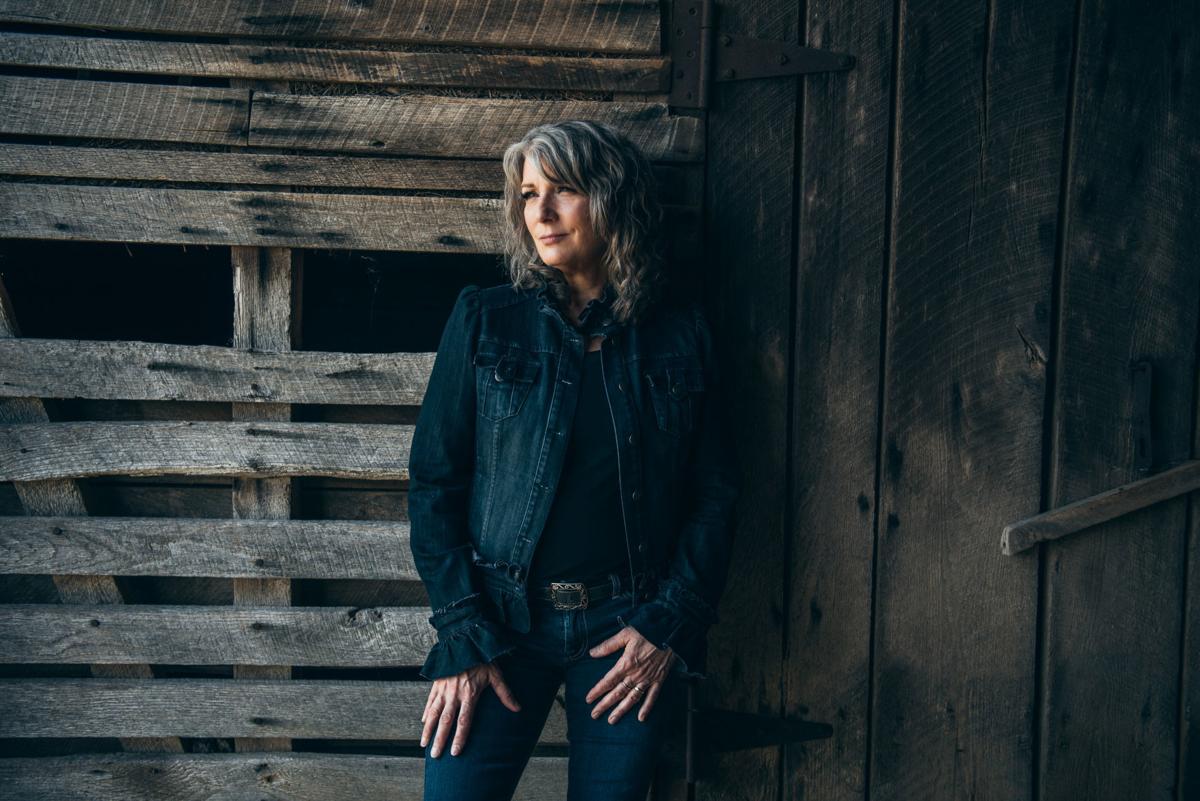 Kathy Mattea appears as part of “Country Music: A Film by Ken Burns.” The 16-hour documentary will be shown later this year, but a sneak peek with special footage will be shown Tuesday in Morgantown. The event also features performances by Mattea and Charlie McCoy. 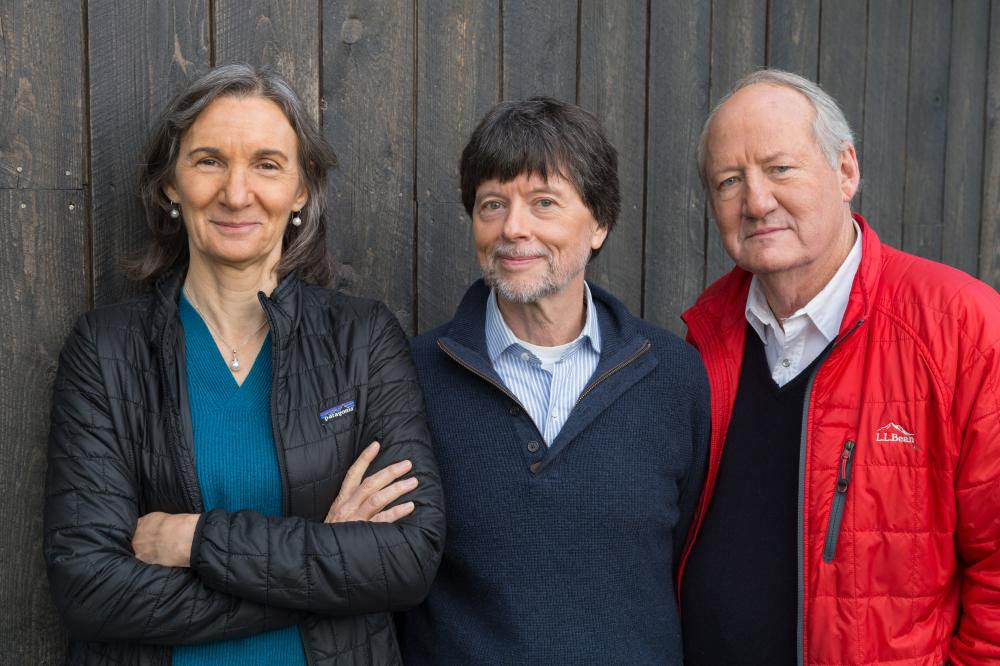 “Country Music: A Film by Ken Burns” was produced by Julie Dunfey (left), Ken Burns and Dayton Duncan. Dunfey and Duncan will be at a special showing of part of the documentary at the West Virginia University Creative Arts Center in Morgantown on April 16.

Kathy Mattea appears as part of “Country Music: A Film by Ken Burns.” The 16-hour documentary will be shown later this year, but a sneak peek with special footage will be shown Tuesday in Morgantown. The event also features performances by Mattea and Charlie McCoy.

“Country Music: A Film by Ken Burns” was produced by Julie Dunfey (left), Ken Burns and Dayton Duncan. Dunfey and Duncan will be at a special showing of part of the documentary at the West Virginia University Creative Arts Center in Morgantown on April 16.

Burns — who is known for a long string of acclaimed documentary films, among them “The Civil War,” “Baseball” and “Jazz” — said, “The first voice you hear in the film is Kathy Mattea and she’s also one of the last.”

In between the beginning and the end, she has much to say, and some of the stories — even stories she’s not part of — are told because she helped them get told.

The Kanawha County native was deeply involved with “Country Music.”

Mattea is still involved with the documentary and will be at the West Virginia University Creative Arts Center in Morgantown April 16, along with Country Music Hall of Famer Charlie McCoy, for a special preview and screening of the film, hosted by West Virginia Public Broadcasting.

Burns won’t be there. Instead, the event will have the film’s writer and producer, Dayton Duncan, and producer Julie Dunfey. Both were central to the production of the documentary and will be presenting special West Virginia excerpts.

Mattea said she was looking forward to people seeing this project she’s been part of for the last half-dozen years. Before she’d been contacted, the country star and occasional “Mountain Stage” guest host said she hadn’t really thought anyone would devote so much time and energy to the history and impact of country music.

“I think it’s more appreciation than shock,” she said. “Someone who makes documentaries about the important things in our country turns their lens on the genre of music I’ve been steeped in — like a tea bag — for most of my life.”

While the 16-hour documentary will be run this summer on local PBS stations, something like a Ken Burns documentary isn’t done overnight.

Burns, along with Duncan and Dunfrey, spent eight years working on “Country Music.”

The musical genre is part of the filmmaker’s DNA. He said he grew up sitting on his grandfather’s knee, listening to him sing mountain music. His father played it, too.

They were country people.

His family, he explained, came from Burnsville in Bath County, Virginia and then moved to Hillsboro in Pocahontas County.

He had family in Clarksburg and then in Lewisburg.

Growing up, Burns said he visited the state many times. Up until a few years ago, he used to come back to West Virginia to visit an aunt and uncle in Greenbrier County, and then drive to Hillsboro to pay his respects at the grave of his great-grandfather before driving on to Burnsville.

His country music upbringing continued past the back porch of his grandfather’s home or his parents’ living room.

In high school, Burns said he worked at a record store during the late 1960s and early 1970s, where he sold a lot of country music — Johnny Cash, Loretta Lynn and Willie Nelson.

But he knew country music. He also knew it was bigger and more inclusive than what some people give it credit for.

“Songwriter Harlan Howard called it ‘three chords and the truth,’” he said. “It’s simple, but we’re not playing around here. The truth is elemental human experience.”

Country music is music for the people — and people, Americans, have trouble dealing with the human experience and their emotions, particularly things like love.

“Country music addresses it in almost every song,” Burns said.

He doesn’t mean that every country song is a love song, but that country songs often see through that lens whether it’s the joy of birth, grief, loneliness or seeking redemption.

There are songs about faith, but country music also embraces humanity’s imperfect and contradictory nature, like the rowdy rogue who drinks and dances all night and then crawls hungover into a church pew the next morning.

Country music is broad, too, with a sound that’s hard to pigeonhole. The western swing of Bob Wills and his Texas Playboys is vastly different from the bluegrass of Bill Monroe or the high lonesome sound of Hank Williams.

“Willie Nelson, his styling, his phrasing, is close to jazz,” Burns said. “Chet Atkins, the epitome of a Grand Ole Opry superstar, his guitar playing, owes itself to Django Reinhardt.”

Reinhardt was a French jazz guitarist and composer in the 1930s and ’40s.

For Mattea, she said her role in the documentary evolved over time.

“We mostly worked with Dayton Duncan, at first, Ken’s partner,” she said.

Duncan has been a regular collaborator with Burns and was part of “The Civil War,” “Jazz” and “The West,” among others.

In the beginning, he would come and visit Mattea and her husband, songwriter Jon Vezner, in Nashville.

“At first, he was picking our brains,” she said. “He’d have a little envelope in his pocket as we had dinner.”

Duncan would ask questions. Mattea and Vezner would answer and then suggest other people he should talk with. Over several years, Duncan began coming back to tell them stories they’d never heard.

“We became students,” she said.

Burns said “Country Music” fits in with his body of work, which isn’t really just about exploring different topics in American culture and history.

“I pick subjects that tell us about who we are,” he said. “Each film is asking the same question — who are we?”

It’s a simple question with a complex answer, but Burns teased some surprises — like Charlie McCoy’s quiet but profound contribution to not just county music, but American music.

In the mid-1960s, McCoy sat in with Bob Dylan for a studio session in New York.

“He was just a kid playing harmonica with Dylan on a song that lasted 11 minutes,” Burns said. “But because of his virtuosity, it encouraged Dylan and then others to pick up and move to Nashville.”

Burns said the show was deliberately silly but had amazing music.

“It was the Julliard school of country music. It revitalized careers,” he said.

McCoy said he hadn’t seen the documentary, though Mattea has seen a version of it.

After the first edit was complete, several of the consultants visited Burns at his home in New Hampshire. They stayed for a few days and watched the film.

“Man, it was powerful,” Mattea said.

There were so many stories, she said. Some of them were familiar, but they were retold and given new energy.

“There was this one day, where Hank Williams dies in the morning and Patsy Cline died in the afternoon and we were all a mess by dinner,” the singer said. “It was such a visceral experience.”

As expansive as a 16-hour documentary sounds, McCoy said eventually there would be even more to see.

“They interviewed 40 members of the Country Music Hall of Fame,” he said. “They said they were donating all of that footage to the hall of fame.”

As with his other films, Burns wanted to tell a good story, but hoped “Country Music” could do what a good country song can — unite people.

The director acknowledged that the country felt very polarized and divided into “us” and “them,” when really, he said, there is no them. There is only us.

Everyone lives with the same unavoidable truth, he said.

“None of us is getting out of here alive,” Burns said. “But a good country song can abolish that realization and connect us with our fellow humans.”