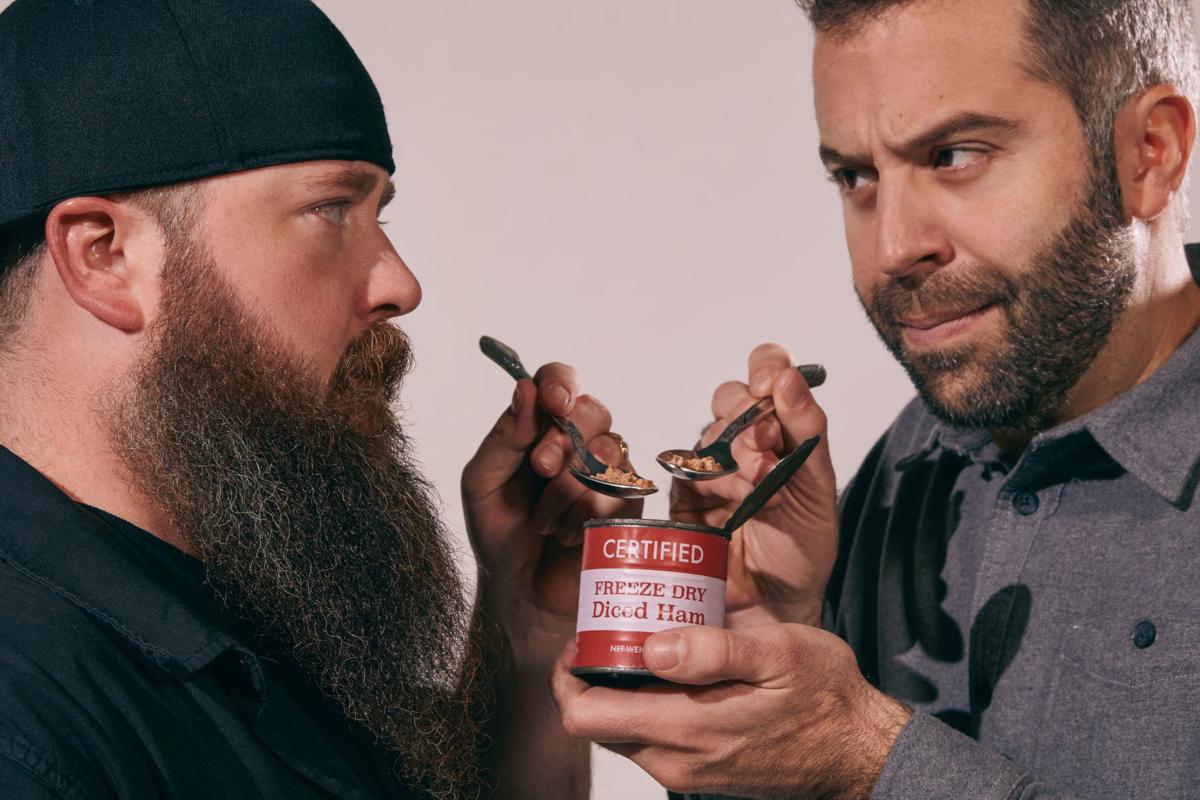 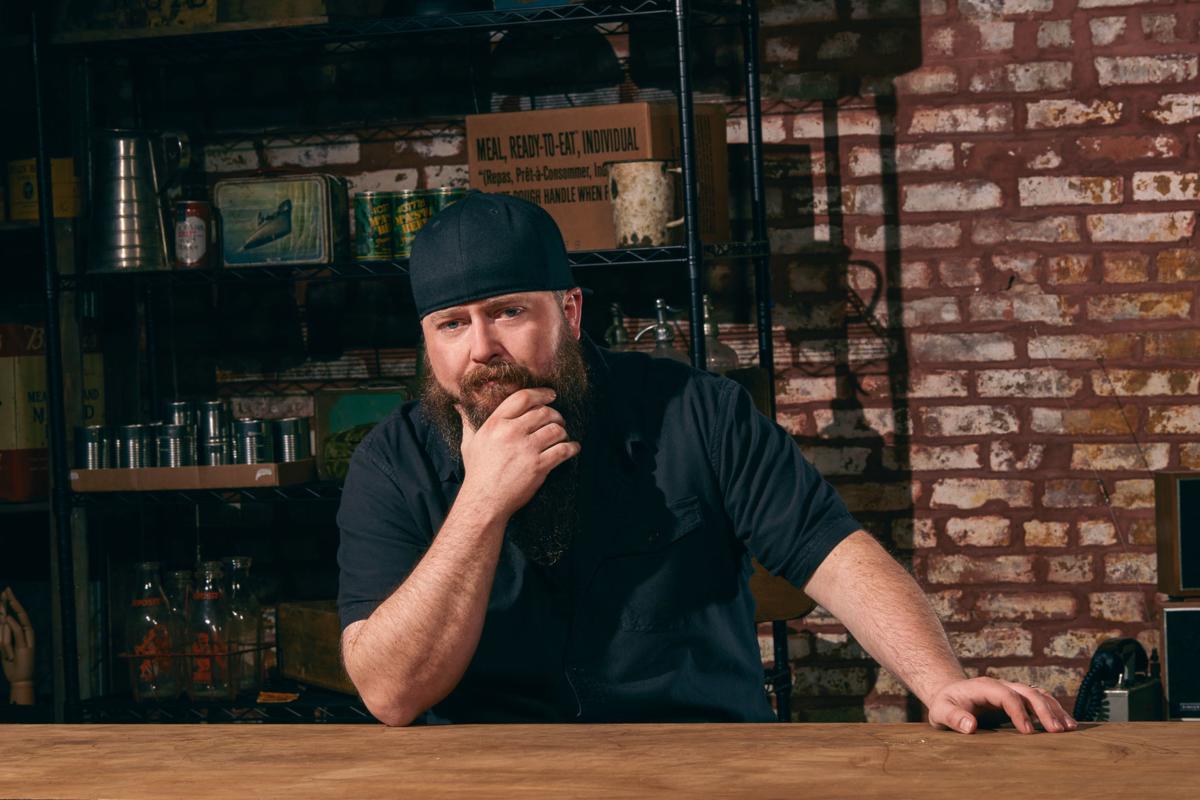 Mason County native Gary Mitchell, known as Old Smokey, turned a passion for vintage foods into what could be a unique television career. He co-hosts “Eating History” on History.

Mason County native Gary Mitchell, known as Old Smokey, turned a passion for vintage foods into what could be a unique television career. He co-hosts “Eating History” on History.

Not everybody would be up for eating a hundred-year-old piece of meat or a mouthful of corn chips from the golden age of disco, but Gary Mitchell, better known as “Old Smokey,” loves that kind of thing.

The 37-year-old Mason County native is the co-host of the History channel’s newest series, “Eating History,” which debuts at 10 p.m. Wednesday.

The show is an exploration of history (mostly American history), using a knife, a fork and a can opener.

“This is not like ‘Fear Factor,’” the vintage food connoisseur who only goes by Old Smokey said. “It’s not for the shock value. This is for history. It’s for the experience. It’s for experiencing history through food.”

This is not a normal job, nor a normal television show, but Old Smokey loved being part of it.

“I think the show is going to be great,” the New Haven resident said. “I’ve enjoyed every moment.”

Getting to “Eating History” was generations in the making, but began with a nickname and an obsession.

“I used to collect old tobacco, back in the day,” he said.

It’s how he got the name — Old Smokey.

What started out as collecting tobacco memorabilia turned into collecting and trying vintage cigarettes, the kind usually hermetically sealed in military rations given out during active combat operations.

“They were stored about as perfectly as possible,” he said.

From collecting and smoking old cigarettes, it was only a short step to just eating the rations themselves, which were also preserved.

“I grew up around my grandfather who served in World War II,” he said. “He had Purple Hearts and didn’t talk a lot about it when I was a kid, not at all to me when I was a kid.”

The newly minted television host realized he could actually eat what his grandfather ate while he was at war, which turned out to not be all that bad.

In war movies, characters often complained about military meals, but Mitchell said he thought it kind of got a bad rap.

“You get some bad ones, but there are more good ones than bad,” he said. “I would say it’s about 70 percent good and with 30 percent, there’s room for improvement.”

Preserved food can be a little salty, which didn’t bother him and might not bother a lot of people.

“That’s going to be specific to each person’s palette,” he said. “It’s what you grew up with and what kind of taste you have.”

There was a reason behind the salt beyond just preservation, he added.

Military rations are higher in sodium (and calories) because they’re often used while soldiers are on active operations, in combat and expending calories at a high rate. Along with the vigorous activity, they sweat and lose minerals, including salt.

More modern varieties of MREs (meals ready to eat) are also loaded with other preservatives. As technology has advanced, so have preservation methods.

Not everyone is crazy about the taste, but Mitchell said the recipes were intended to be easy to consume and easy to digest, so that anyone could eat them.

“If you make it really spicy or have a really standout, particular taste, then not everybody can eat it,” he said. “So, they’d tone it down a little.”

Mitchell became obsessed with trying all different kinds of military rations from every era he could get his hands on. He even tried rations from different countries, and made videos of his exploits which he posted to YouTube.

He became part of a small-but-devoted group of historical food aficionados, which was how he met Ken Conley, who ran a site called MREinfo.com. The site gives information about meals ready to eat and includes a link to a marketplace site where customers can purchase new products.

“They came to him looking for people who could host the TV show about vintage foods and I was one of the names that popped into his head,” Mitchell said.

Producers liked him and matched him up with his co-star, Josh Macuga, and set the pair off on a culinary adventure of a lifetime.

For the first season, the pair got to try some interesting food — Fritos from 1979, Star Wars-themed breakfast cereal from the 1980s, hardtack from 1913.

Hardtack was a kind of simple biscuit used for centuries by armies and by sailors on long ocean voyages. It was baked hard, and could sometimes be kept for years.

In this particular case, the hardtack had been kept for 150 years.

“That was from the 50th anniversary of Gettysburg,” Mitchell said. “We got some cool documentation to back that up.”

While there was a certain amount of shock value in the foods the two tried, Mitchell said every bite came with some story and always a surprise.

One of the things they tried was some Pepsodent tooth powder, a predecessor to modern toothpaste.

“The tooth powder was really kind of the beginning of the era when people started brushing their teeth,” he said. “Before then, people didn’t really brush their teeth. It wasn’t a thing.”

Poor oral hygiene caused all kinds of health problems, not to mention the bad breath.

“I’m glad that advancement was made,” he said.

The show debuts Wednesday and will run for 10 episodes. Mitchell said he is hoping the show becomes a success — he has a long list of things he’d like to try.

In Georgia — the small Eurasian country south of Russia and north of Turkey — archaeologists unearthed jars of honey from a tomb that date back 5,500 years.

“That should still be edible,” he said. “Everything about it says it should be. I want to be the person who has eaten the oldest thing ever.”