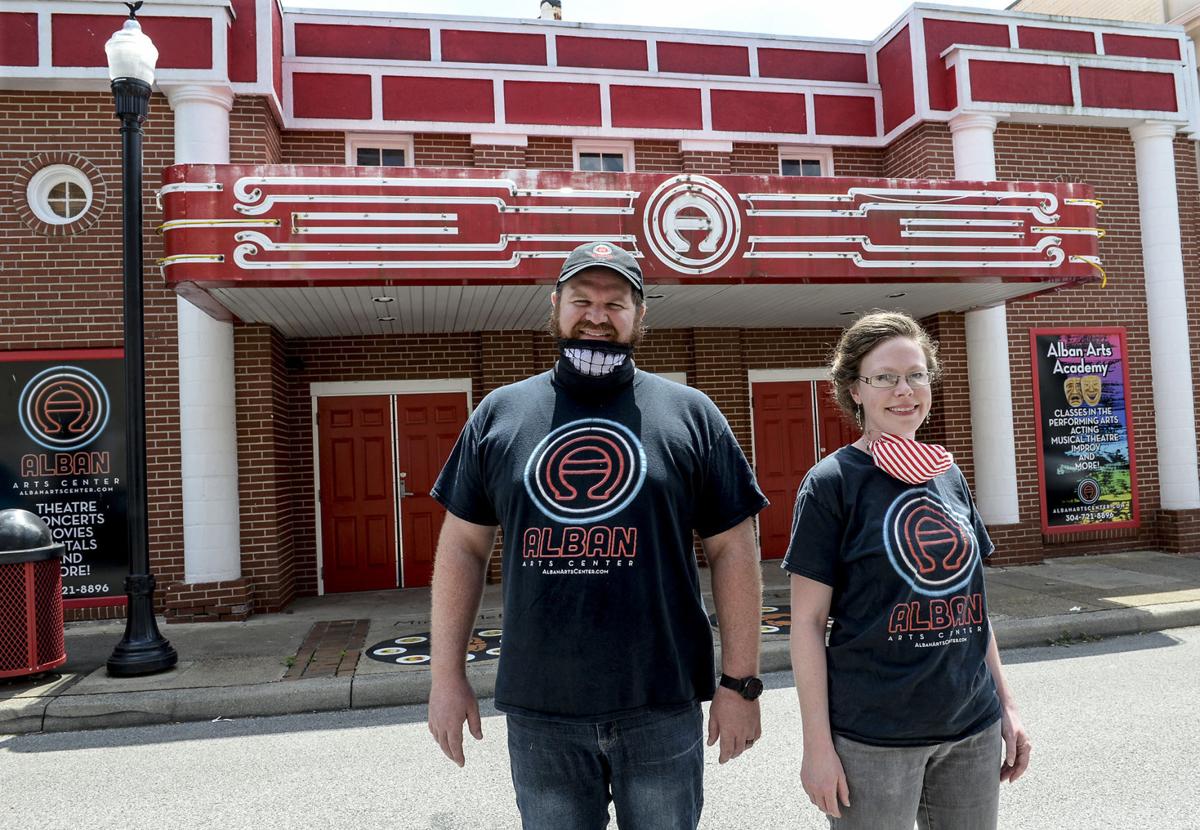 Alban Art Center directors Adam Bryan and Marlette Carter in St. Albans. The team at the Alban has taken innovative steps to be sure the show goes on through the coronavirus pandemic. 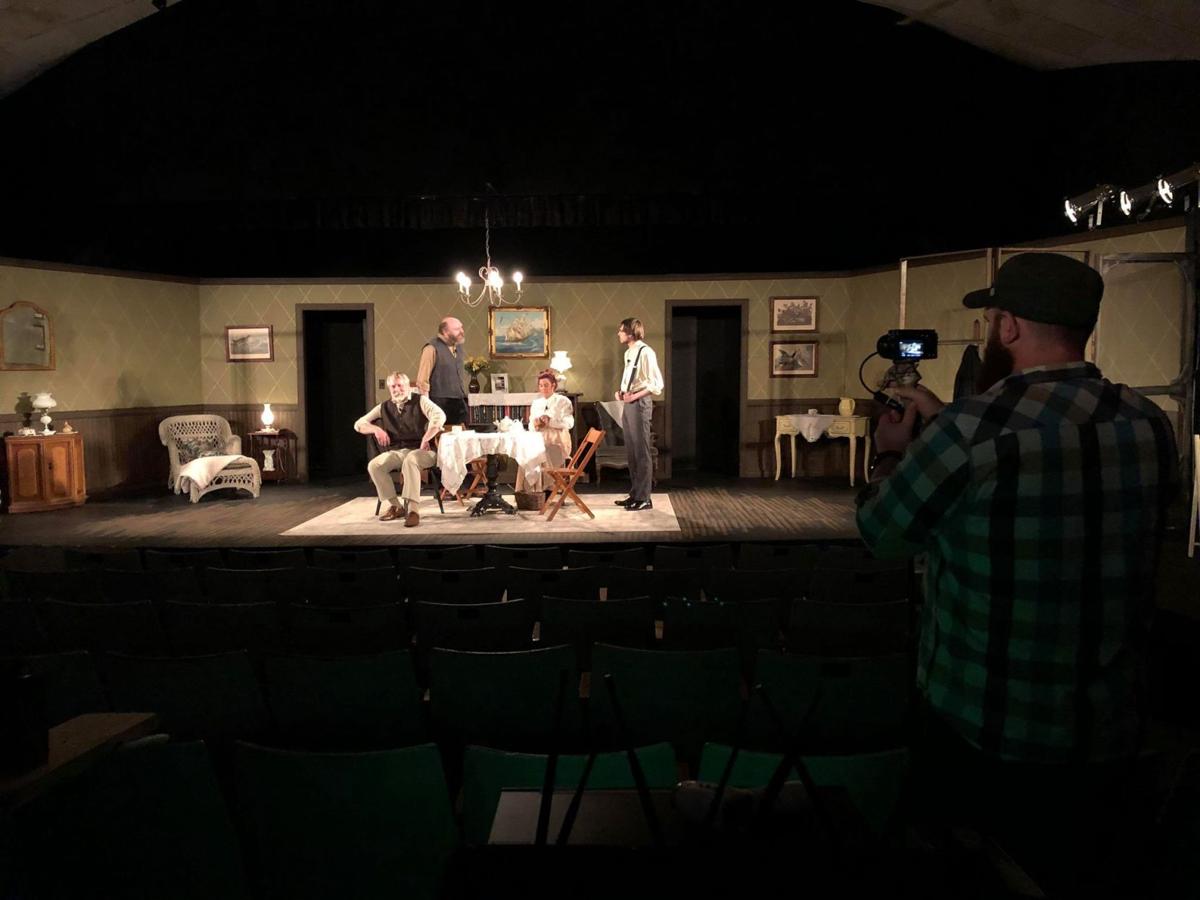 The cast of the Alban Arts Center’s production of “The Eugene O’Neill Project” performs while a crew member films for online streaming. 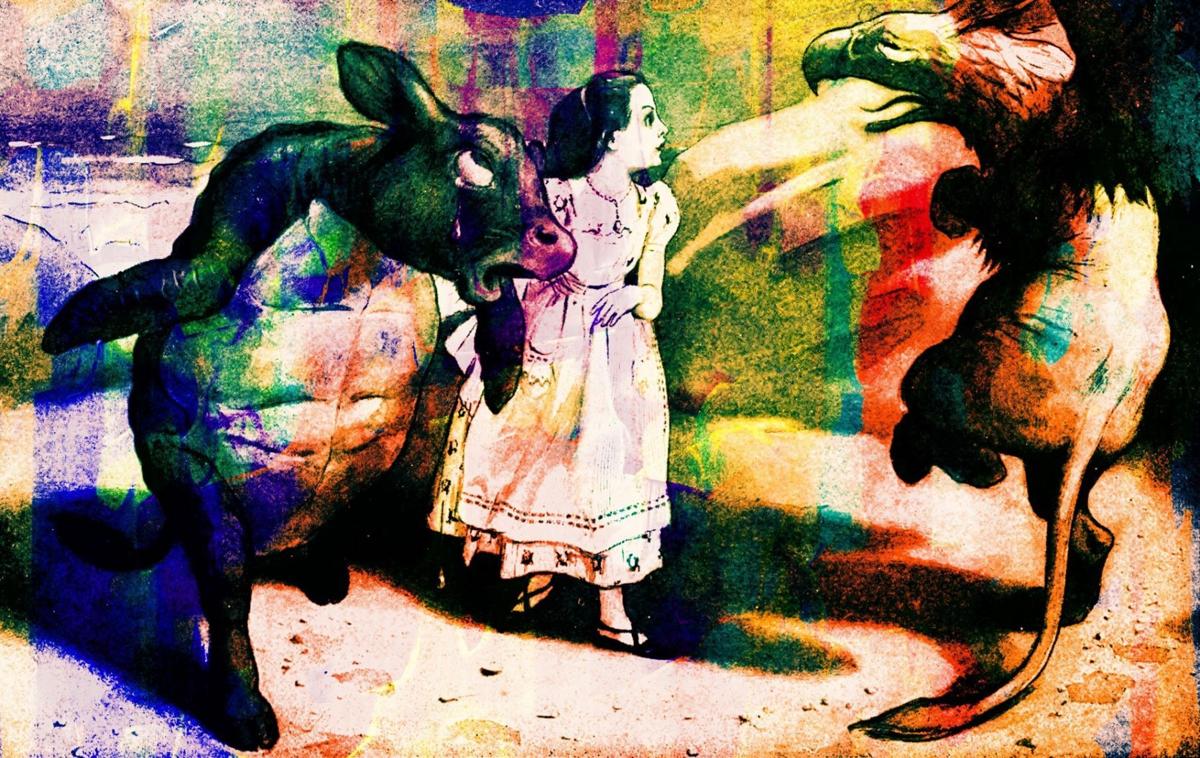 The Alban Arts Center in St. Albans is scheduled to present “Alice in Wonderland” in a virtual format in September.

Alban Art Center directors Adam Bryan and Marlette Carter in St. Albans. The team at the Alban has taken innovative steps to be sure the show goes on through the coronavirus pandemic.

The cast of the Alban Arts Center’s production of “The Eugene O’Neill Project” performs while a crew member films for online streaming.

The Alban Arts Center in St. Albans is scheduled to present “Alice in Wonderland” in a virtual format in September.

As the COVID-19 pandemic began to sweep across the country, theaters everywhere closed. Touring productions shut down and sent their actors home. Even Broadway went dark.

In West Virginia, Charleston Light Opera Guild, Contemporary Youth Arts Company and Theatre of West Virginia all scrapped their schedules, locked box offices, and hunkered down to wait it out.

But not the Alban Arts Center in St. Albans.

Socially distanced and speaking over the phone from inside the Alban Arts Center, managing director Adam Bryan said his theater barely stopped.

“We’re adapting and overcoming, like we always do in the theater world,” he said. “We’re making things happen.”

When the pandemic made its way into West Virginia and Gov. Jim Justice issued a general stay-at-home order, the Alban Arts Center was in the middle of rehearsals of Eugene O’Neill’s “A Long Day’s Journey Into Night.”

“Pretty soon after the lockdown began, we knew we were going to have to find a different way to present live theater,” Bryan said.

With social distancing and orders to limit the number of people in public spaces, he said they knew that having an audience in the theater was unlikely.

“And it wasn’t something we were going to get back anytime in the near future,” Bryan said.

The production paused while the Alban regrouped. Bryan laughed and said, “I went to YouTube school and taught myself how do a lot of video stuff.”

They reworked the play into “The Eugene O’Neill Project,” which included selections from “A Long Day’s Journey into Night,” along with scenes from three other plays from the playwright. Then they filmed it live on stage with a couple of cameras, with the show’s director directing the shots in real time.

“We didn’t edit much, but just put it together and released it on YouTube as an unlisted video,” he said.

Putting the video online for the entire public, he explained, would have violated production and copyrights.

Patrons bought a ticket to a performance, which entitled them to an online link to the show, which ran in June during FestivALL’s virtual arts festival.

Since the start of the pandemic, Bryan said they’ve adapted as much as they could to keep working.

Some shows at the Alban were lost. Others were postponed.

Some losses have been harder than others.

Emmy winner Ed Asner was scheduled to return to the Alban Arts Center for a performance in May.

“But that was during the thick of things with the virus,” Bryan said. “They were of the same mind as we were, postpone rather than cancel. We moved it to November, but I don’t know.”

The Alban did manage to put on Madeleine L’Engle’s “A Wrinkle in Time.” The show was also streamed through YouTube, though live, this time.

Now, they’re moving forward with two fall productions: “Alice in Wonderland” at the Alban and an outdoor production of William Shakespeare’s “The Merry Wives of Windsor.”

While the productions are very different from one other, Bryan said they’re both focused on keeping everybody safe.

For rehearsals, they keep the number of people in the theater down to below 25.

Bryan said the cast for “Alice” is fewer than 20 and they’re not doing full rehearsals — at least, not yet.

“We can do everything in small groups,” he said.

Anyone coming into the Alban gets their temperature checked. When actors aren’t on stage rehearsing, they’re scattered throughout the theater and seated in different aisles to maintain plenty of social distance.

There are bottles of hand sanitizer and everybody wears a mask.

“We were encouraging people to wear masks before,” Bryan said. “Since the governor’s order, it’s a requirement.”

Nobody complains but the arts center manager acknowledged that wearing a mask on stage is problematic.

“It’s harder to hear people,” he said. “It’s harder to see a full set of facial expressions, like smiling, frowning, baring your teeth, whatever, but it’s better than not doing anything.”

The cast and crew want to create.

Bryan said when they hosted auditions for “Alice in Wonderland” he talked the actors and explained that taking on a show meant more than being safe at the theater. They had to be responsible outside the theater, too.

“I don’t expect anyone to lock themselves in their room for two months to do the show, but your fellow actors and crew need to trust you,” he said. “They need to feel safe around you.”

Which means avoiding unnecessary risk outside the theater.

“Just being in a production right now is a risk and you need to take it seriously,” he said.

Bryan said the Alban planned to stream “Alice in Wonderland,” like they did “A Wrinkle in Time,” which allowed them some flexibility with when they opened the production.

“If someone gets sick, they have to quarantine and go take care of themselves,” he said.

With a smaller role, the show might continue on, as scheduled.

“But, obviously, not if it’s Alice,” he said. “With streaming, we could postpone the production.”

That would be harder with “The Merry Wives of Windsor,” which will accommodate an in-person audience, though one that will be watching from the relative comfort and safety of their cars.

“The actors’ microphones will be connected to an FM transmitter,” Bryan said. “People will be able to tune in and hear.”

Ticket prices may be affected by the streaming. Bryan said they’d seen a drop in ticket sales with their last two productions, though he didn’t think they’d lost that much audience.

Plenty of people watched the show, but not all of them paid.

“When you go to live theater, you take your family and you buy four tickets. With streaming, you’re just buying one ticket, but maybe four or more people are watching,” he said.

Bryan said they didn’t lose a lot of money for those summer shows, but they did lose some money.

The streaming price for “Alice in Wonderland,” he said, would probably be $20, the price of two adult tickets. Bryan didn’t think raising the price would make a lot of money, but the Alban is a non-profit theater company.

“But you have to understand that we’re a struggling arts organization,” he said. “We’re not trying to get rich, but we have to try, at least, to break even.”