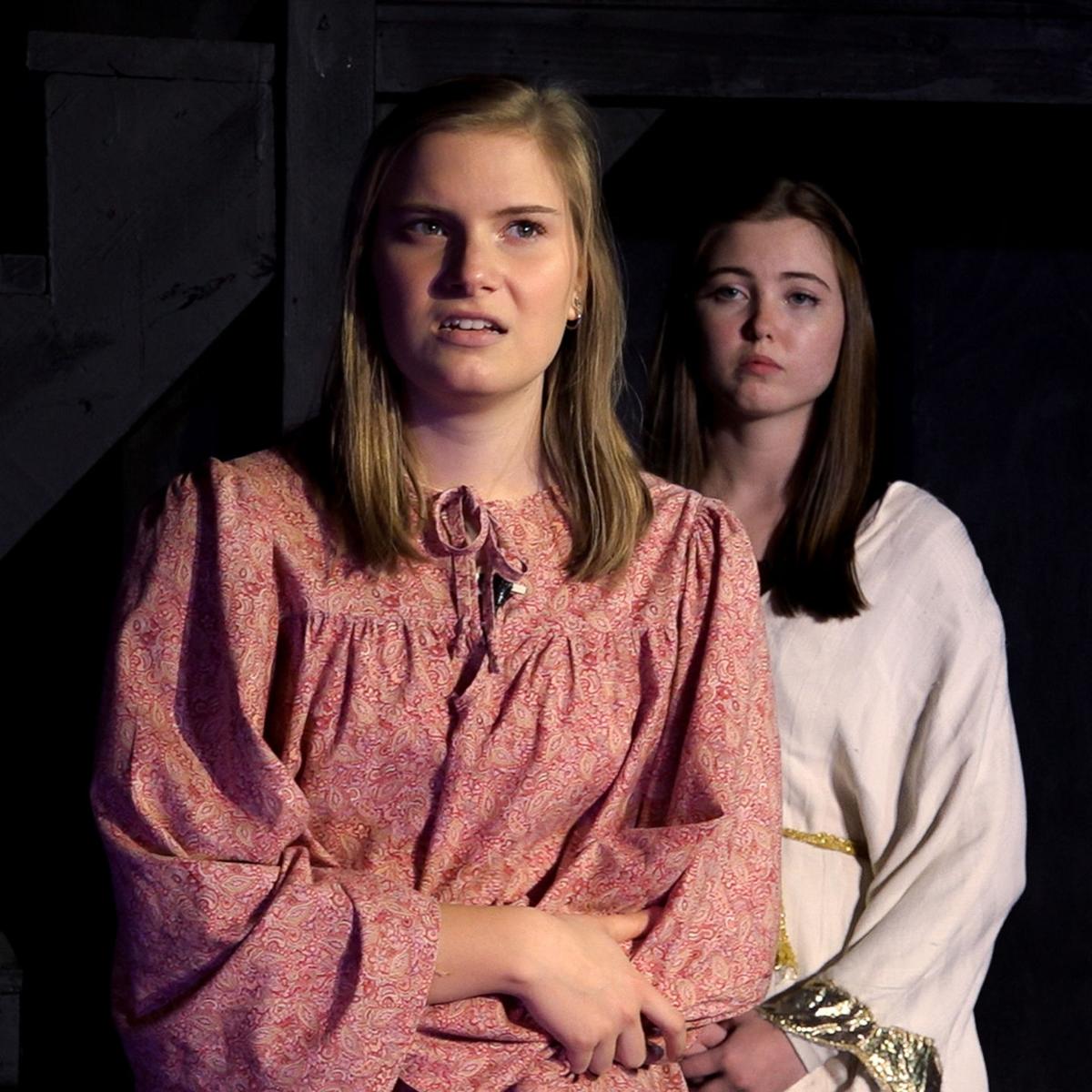 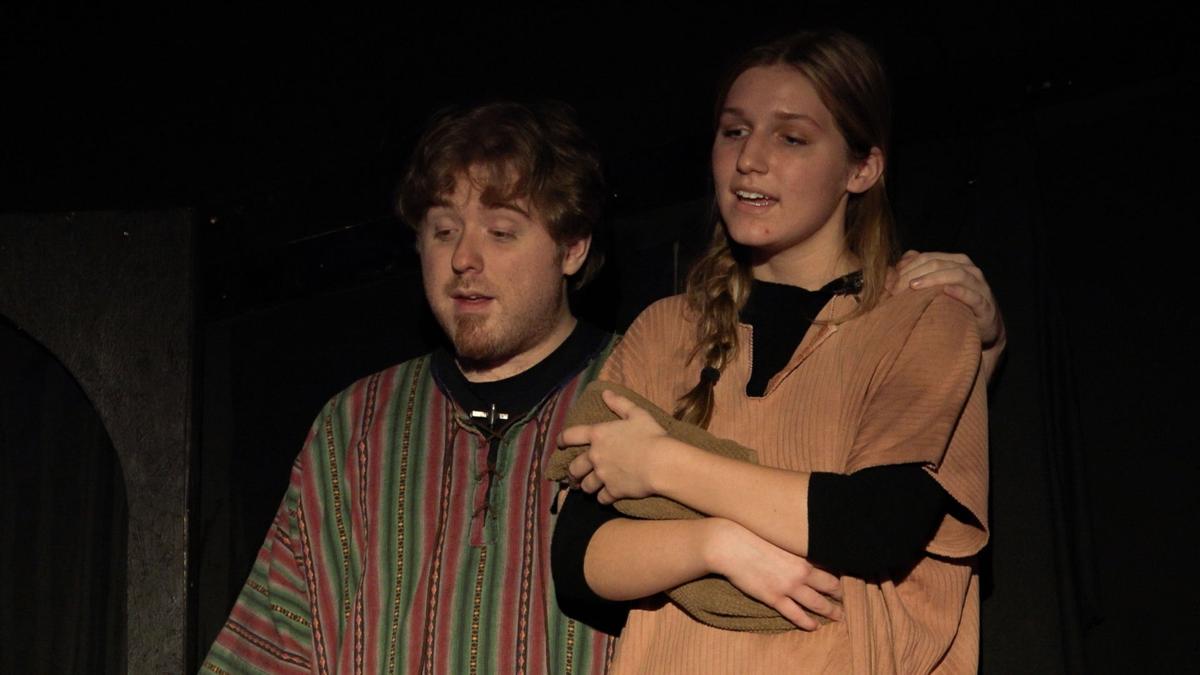 Nik Tidquist as Zechariah (left) and Grace Javins as Elizabeth (right) in this year’s video production of “Mary.” The show features a bare bones cast to help maximize safety for all involved.

Nik Tidquist as Zechariah (left) and Grace Javins as Elizabeth (right) in this year’s video production of “Mary.” The show features a bare bones cast to help maximize safety for all involved.

Theater in Charleston and everywhere else has had a hard year because of the coronavirus pandemic, but it’s slowly trying to come back.

Friday night, after a nine-month hiatus, Contemporary Youth Arts Company presents its annual holiday musical, “Mary,” but it will look very different this year and the audience will be watching from home.

“We’ve turned it into a kind of a film,” director Dan Kehde explained.

Getting back to doing any kind of theater for Kehde and his (mostly) teenage cast was a long road. As safety restrictions were placed on public performance, he said he tried to stay busy.

“I figured, what the hell, I have all this spare time, so I wrote three new plays,” he said.

“Suddenly, the bottom fell out,” Kehde said. “I hit about June or July and all the creativity was sucked from me.”

The director puttered around the house and then holed himself up inside the Elk City Playhouse, CYAC’s new home.

“I redid the theater completely,” he said. “I kept my hands busy, but the whole thing was very strange, very enervating.”

Through the course of the pandemic, restrictions gradually loosened and other theater companies moved forward with productions. There were outdoor performances. Shows were streamed live or pre-recorded and then sold online, but these were dramas and comedies.

Nobody was really doing musicals. Throughout the pandemic, health experts have warned against singing because it increases the spread of breath, which might lead to a greater area of spread for COVID-19.

Kehde didn’t see a way forward at first, but then people began asking about the company’s annual holiday production of “Mary,” which has been a seasonal staple in Charleston for more than 20 years.

“And I had these three girls in the company,” he said, referring to Susannah Atkins, Afton Myers and Grace Javins.

“They’ve been doing the show for a couple of years,” the director added. “This is their senior year and they’re just tremendously good kids, just tremendously nice people — the kind that feel guilty if they drive past the guy at the stoplight asking for money.”

Kehde said he hated that the theater company wasn’t going to do anything, so he started exploring a video production.

As he has done many times before because of either space available to perform or number of actors in the cast, Kehde retooled the show and broke it down to just the principle cast, the fewest people he could put in the same room.

The director said his leaner cast rehearsed in masks and kept musical director and accompanist Mark Scarpelli shunted off to the side out of the way.

“We brought in Austin Susman, a professional, to film the show,” Kehde said. “We came up with a budget for him to work with to do the show.”

The show was filmed in scenes and segments that could be edited back into order. Kehde said as much as he could, actors were filmed one at a time or in small ensembles.

“And we were scared to death,” he said. “Everybody wore masks whenever they weren’t on camera.”

The production was filmed over a weekend at a quick pace, but then CYAC ran into a snag just as they were beginning post-production. One of Kehde’s actors had contact with someone outside the theater company who’d tested positive for COVID-19.

“Everyone went into quarantine and we just quit right there,” Kehde said.

Susman and Scarpelli dove into editing video and adjusting the audio.

The show will be available Friday night. Tickets to see the show are on a donation basis — and, after a year like 2020, every little bit helps.

Kehde said he was glad they made the show, but expected that this would be the last production of its kind from CYAC.

“We’re going to wait for the vaccine,” he said.

Once public shows become safe again, the director said they hoped to get back to doing live theater again, but he wasn’t sure what “Mary” would look like next year.

“It’s supposed to be our 25th year,” he said. “That should be like a big production, maybe, a celebration, but that all depends on who I get to come out, where we are, all the usual things.”

Still, he acknowledged that he’d love to do a big production next year and bring back all the things he had to leave out of the video version.

“I miss the dances. They really light up the piece,” he said. “But we did what we could with what we have.”

His greatest hope is that when the pandemic fades away is that people will come away from a year of social distancing and forced isolation with a great appreciation for live performance.

“Maybe they’ll see what a privilege it is to see live theater,” he said.WANT TO GO?