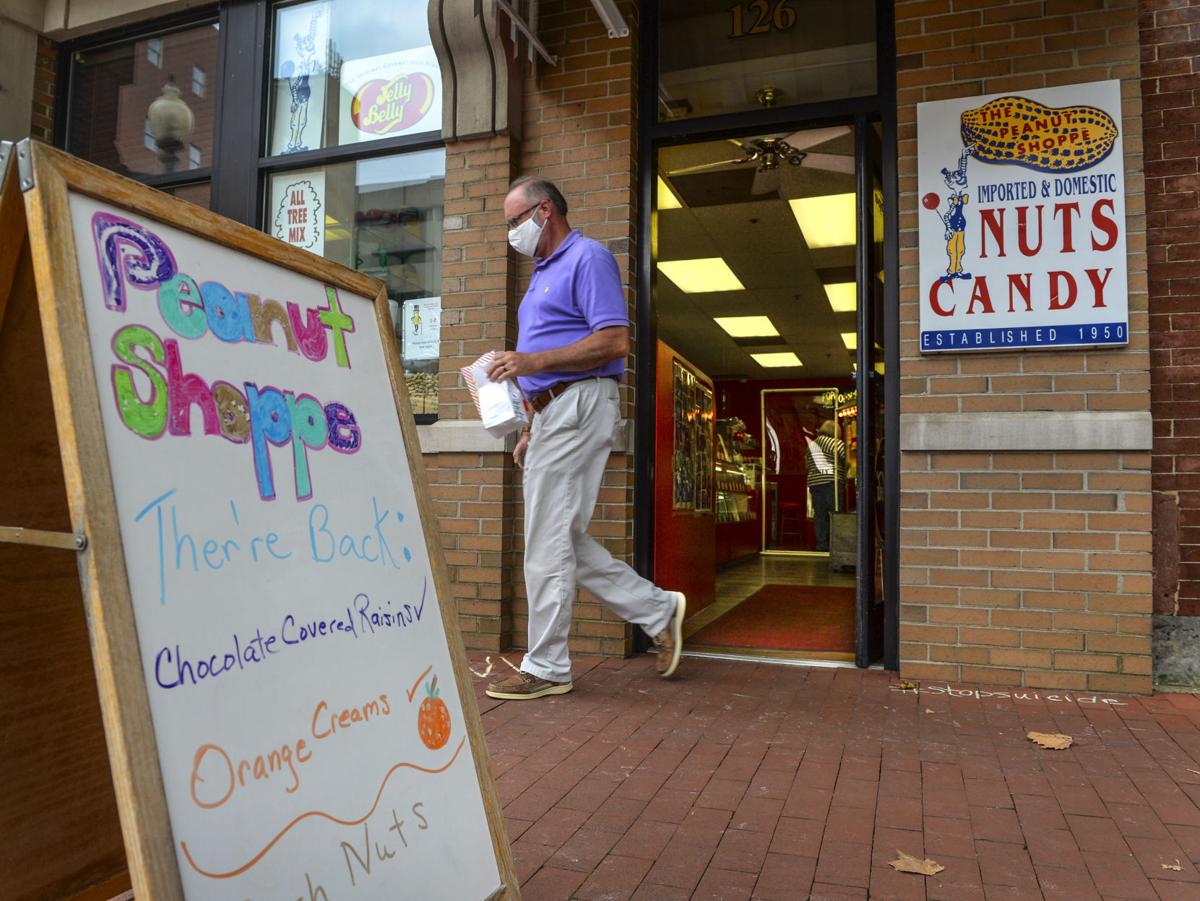 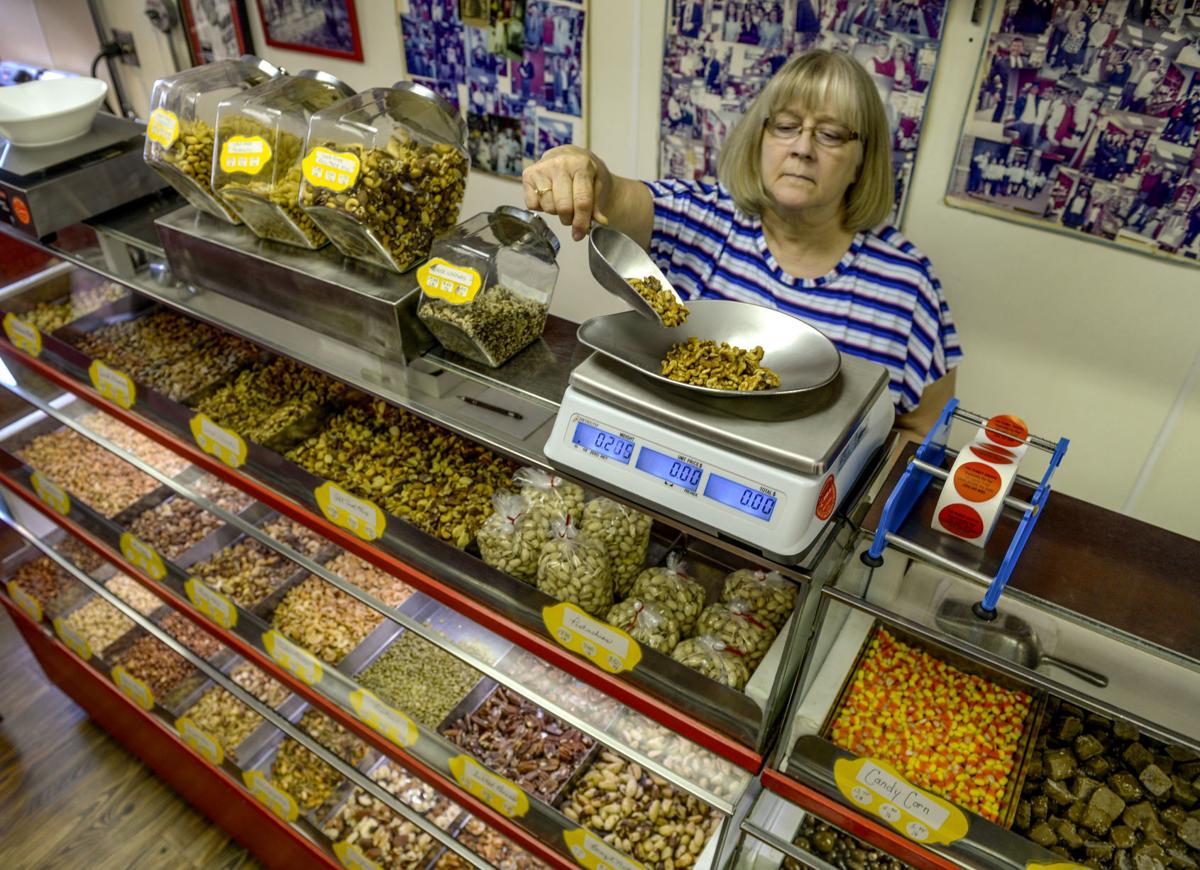 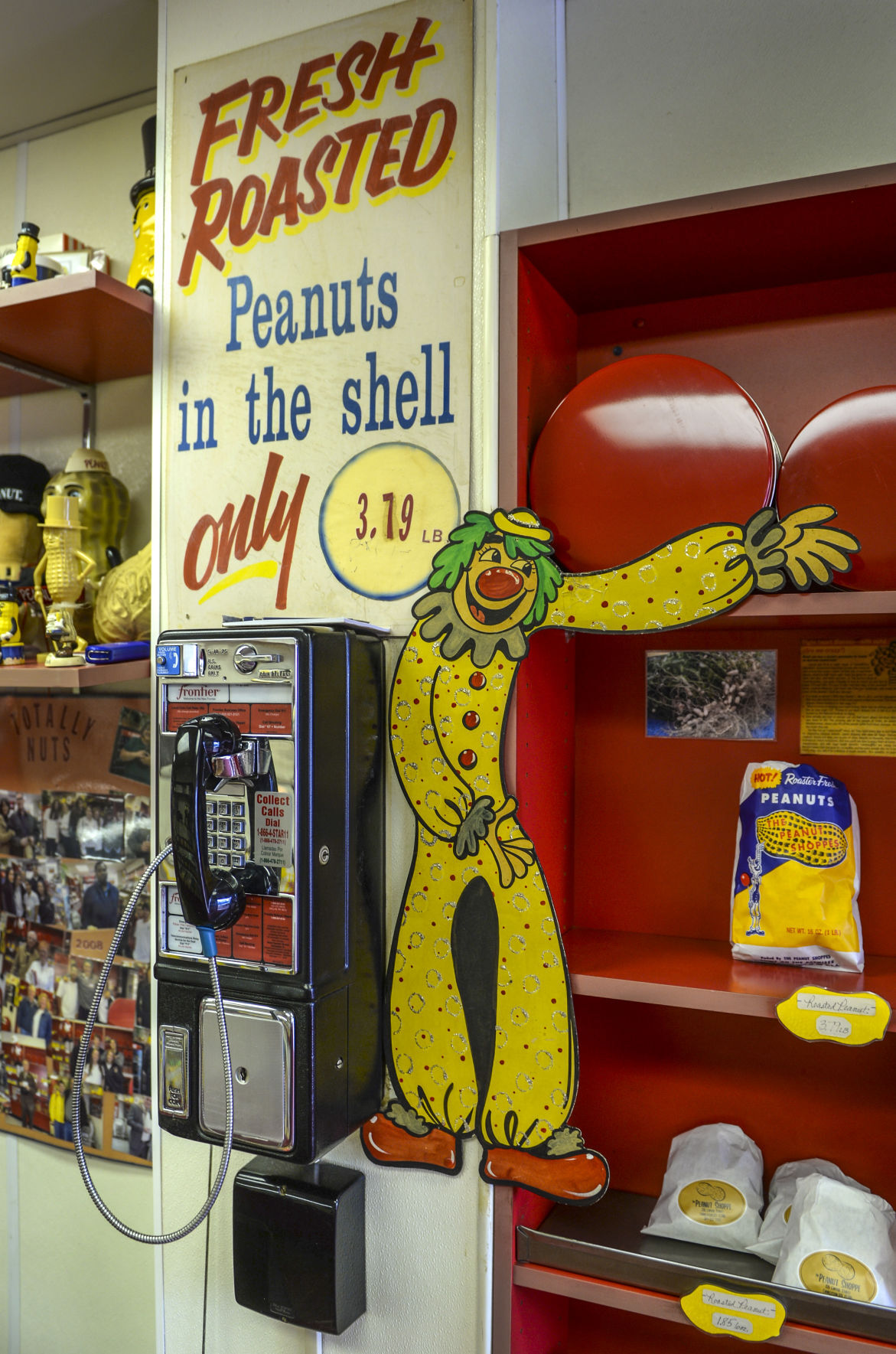 A fully operational pay phone still hangs on the wall of the Peanut Shoppe, in downtown Charleston. The phone is used by employees to take call-in orders. 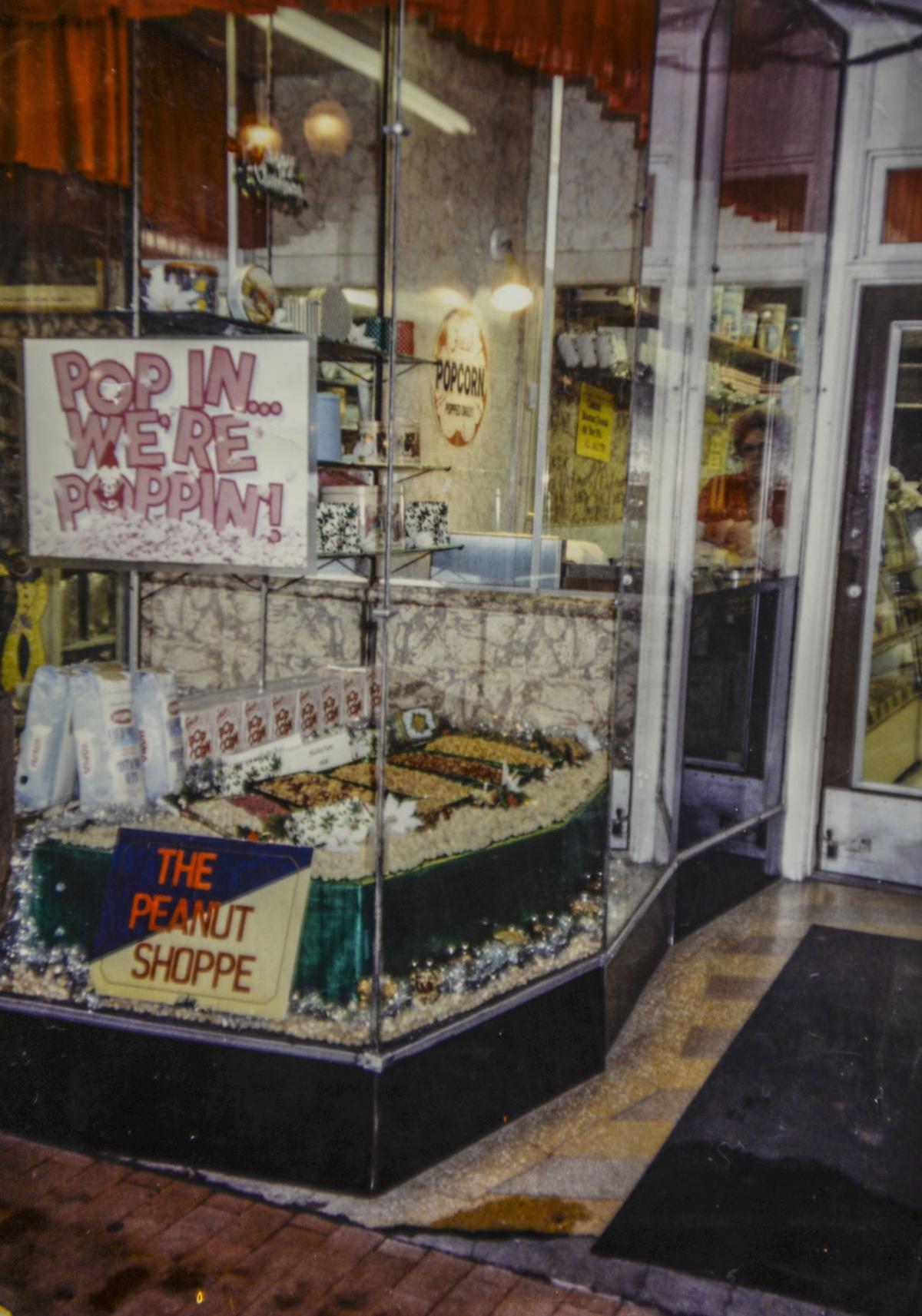 A photo taken in the 1970s of the Peanut Shoppe, on Capitol Street. The business will celebrate 70 years -- all in the same downtown location -- next week. 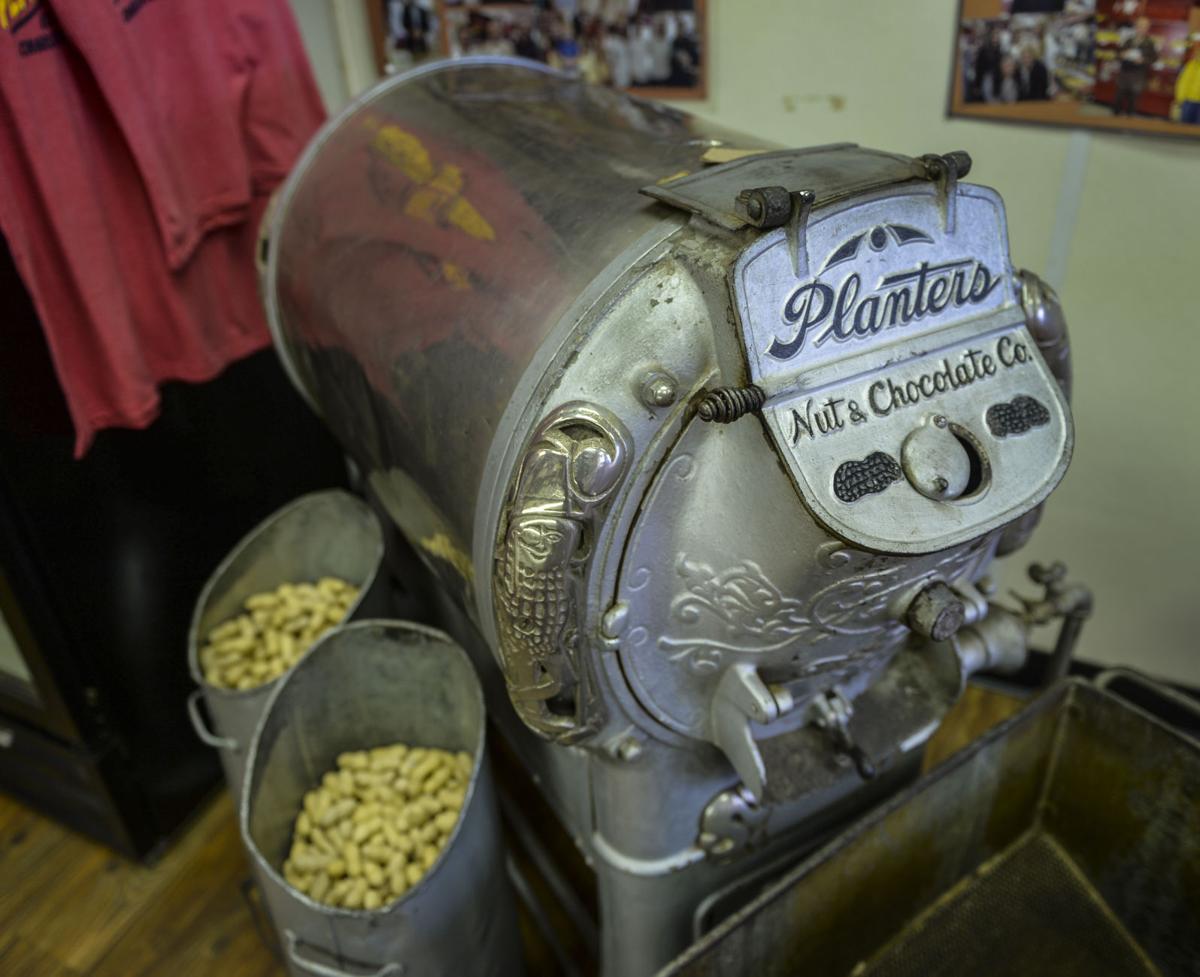 The Peanut Shoppe still roasts peanuts in this same machine that’s been used for 70 years.

A fully operational pay phone still hangs on the wall of the Peanut Shoppe, in downtown Charleston. The phone is used by employees to take call-in orders.

A photo taken in the 1970s of the Peanut Shoppe, on Capitol Street. The business will celebrate 70 years -- all in the same downtown location -- next week.

The Peanut Shoppe still roasts peanuts in this same machine that’s been used for 70 years.

Kandi Kimble, who oversees the day-to-day operations at the Peanut Shoppe in downtown Charleston, pondered the question Friday afternoon.

Could the Peanut Shoppe, the venerable family-owned business that’s been a staple in the Capital City for 70 years, be the longest-operating business in the state still in its original location?

And why should she?

There’s no reason to peer beyond the front doors that open onto Capitol Street. Because things inside the 850-square-foot shop (including storage basement) are nearly the same as they’ve been for decades.

The antique roaster sitting in the middle of the Peanut Shoppe has been operating since Delbert Moore — the grandfather of her husband, Adam Kimble — opened the business on Sept. 15, 1950. It underwent a slight remodel in 1994 that included new windows at the front of the store, and the floors were refurbished 10 years ago.

Yes, that’s a working pay phone on the wall that also serves as the store’s main number. Credit card purchases are powered by dial-up internet, a way of keeping things “old school” even if digital transactions don’t ooze 1950s nostalgia. And images of Mr. Peanut litter the shelves and walls in a fitting homage to the patron saint of peanuts since 1916.

Still, is it the state’s longest-running business to remain in one spot? The mere possibility even impressed outsiders.

Of course Doty, like the Kimbles, couldn’t answer that question. After all, she and her husband, Larry Doty, were just visiting downtown. They were camping in Milton and spent Day 4 of an extended visit to the Virginias by exploring Charleston.

They saw something touting the Peanut Shoppe, it reminded them of a place in Lansing, and Larry Doty likes nuts. Not long afterward, they were seeking out a parking space.

The Dotys left with a bounty of caramels, bridge mix and chocolate-covered peanuts, the store’s best seller. Those white paper bags — each sealed with a Peanut Shoppe sticker — will serve as snacks for the nine days they plan to remain in the Mountain State.

Perhaps the staff at the Peanut Shoppe will have expanded by the time the Dotys return home.

Kimble said, other than the COVID-19 pandemic (which she said has cut business by as much as 50%), finding employees is the biggest challenge now, as opposed to its founder’s heyday.

Moore grew up in Monongalia County, trained with the Planters Nut & Chocolate Co., and later worked in a shop in Trenton, New Jersey. Planters later helped him open a shop of his own in Charleston. It has remained in family hands since he died in 1986, with Kandi Kimble assuming the reins three years ago from her husband.

Much has changed during that time.

Dietary habits have shifted, including with regard to snacking — some of which is based on nutrition, some merely generational.

Normally, there are two people operating the counter, keeping popcorn popping and making sure everything is in order throughout the day, with Kimble popping in and out. But she said finding people who want to work at an old-time business in a modern age, even on a part-time basis, is a struggle.

Yet the business continues as it has since Moore first turned the door’s locks when Harry Truman was president. There have been some adjustments, such as a fundraising program to assist area organizations and a push to provide their products as corporate gifts.

Advertising remains at a minimum, with the only real campaigns coming during the holidays.

For a place that has been in one spot for so long, little advertising is needed. That much was evident Friday, as Kimble threw a wave and a kind word at one person after another walking past the open door.

“We are a small community and love our neighbors,” she said. “Just like at home with your neighborhood; we check in on each other and try to help when we can. We also have a lot of regular customers. When they come in, we know what they want before they even tell us.”