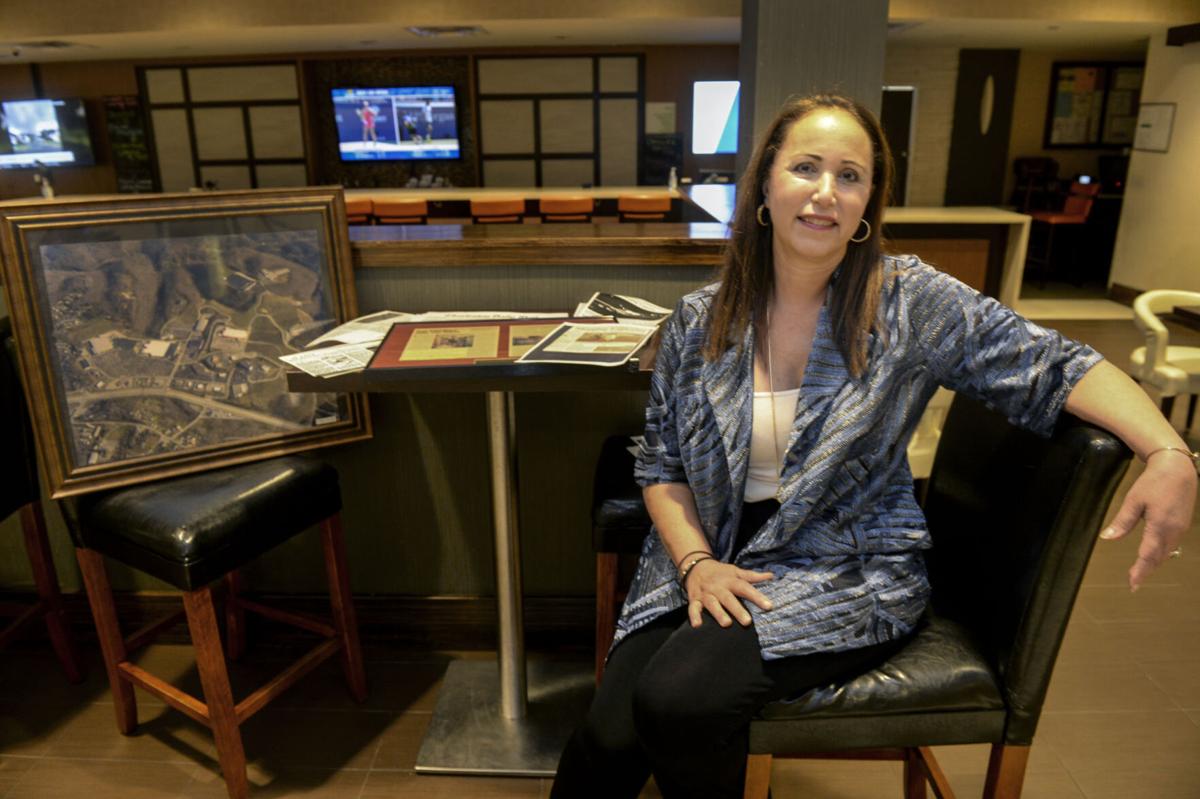 Georgette Rashid George recalls waiting for the right time for her family to launch the original Southridge Centre. 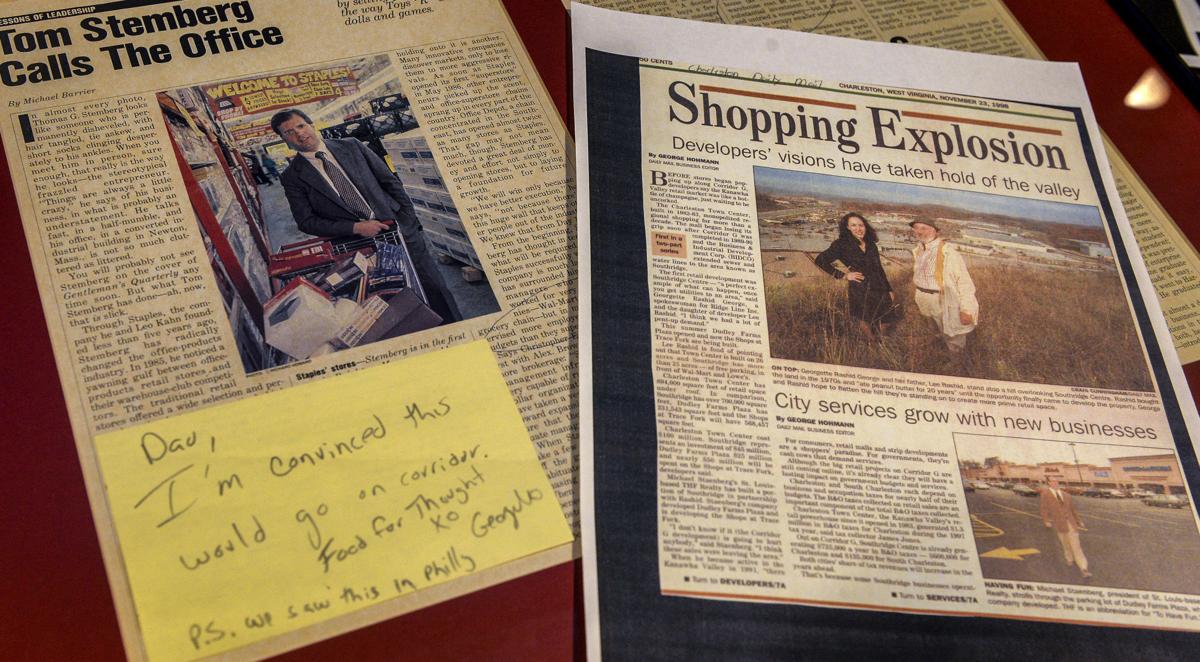 Among the many newspaper clippings Georgette Rashid George saved is one on the left she came across, before joining her dad full time in real estate. She recommended Staples as a potential tenant, and it became one, for about 15 years. 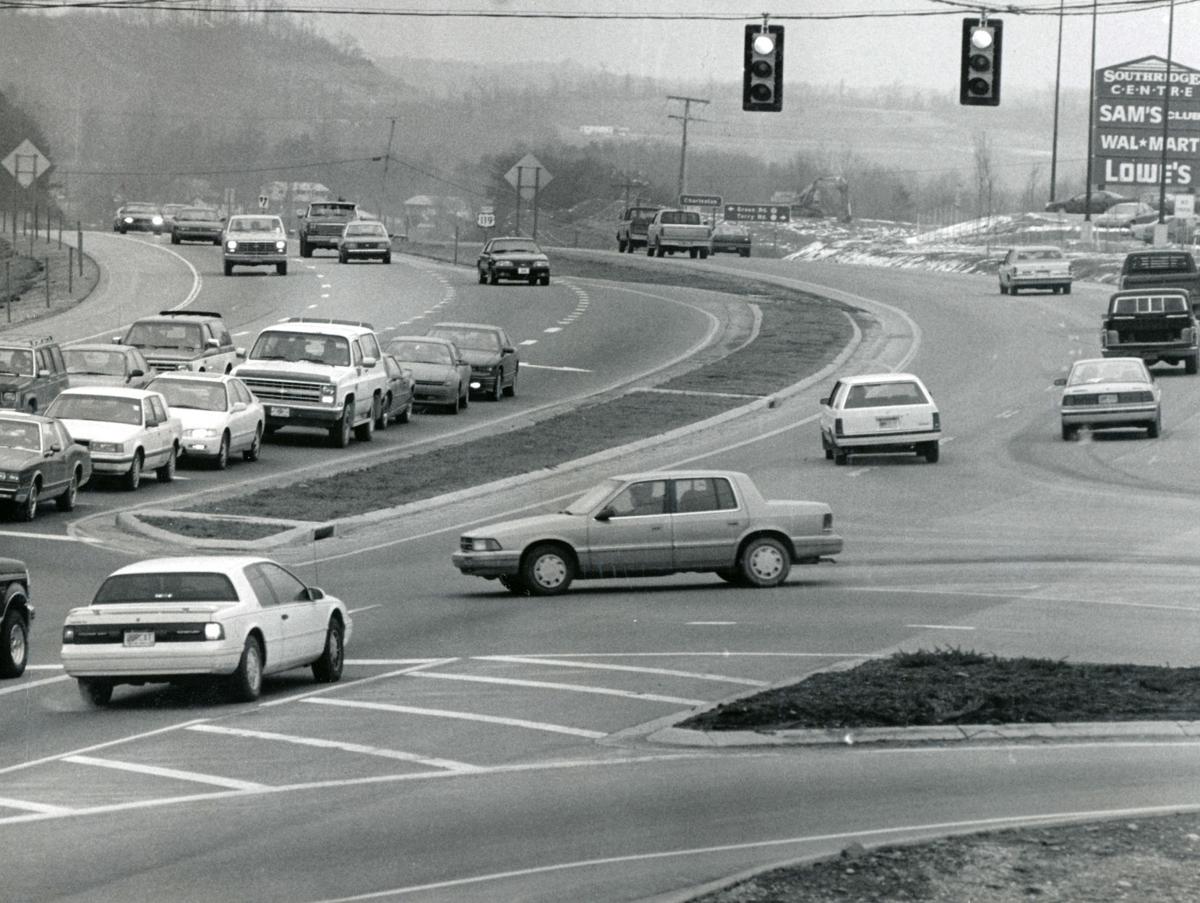 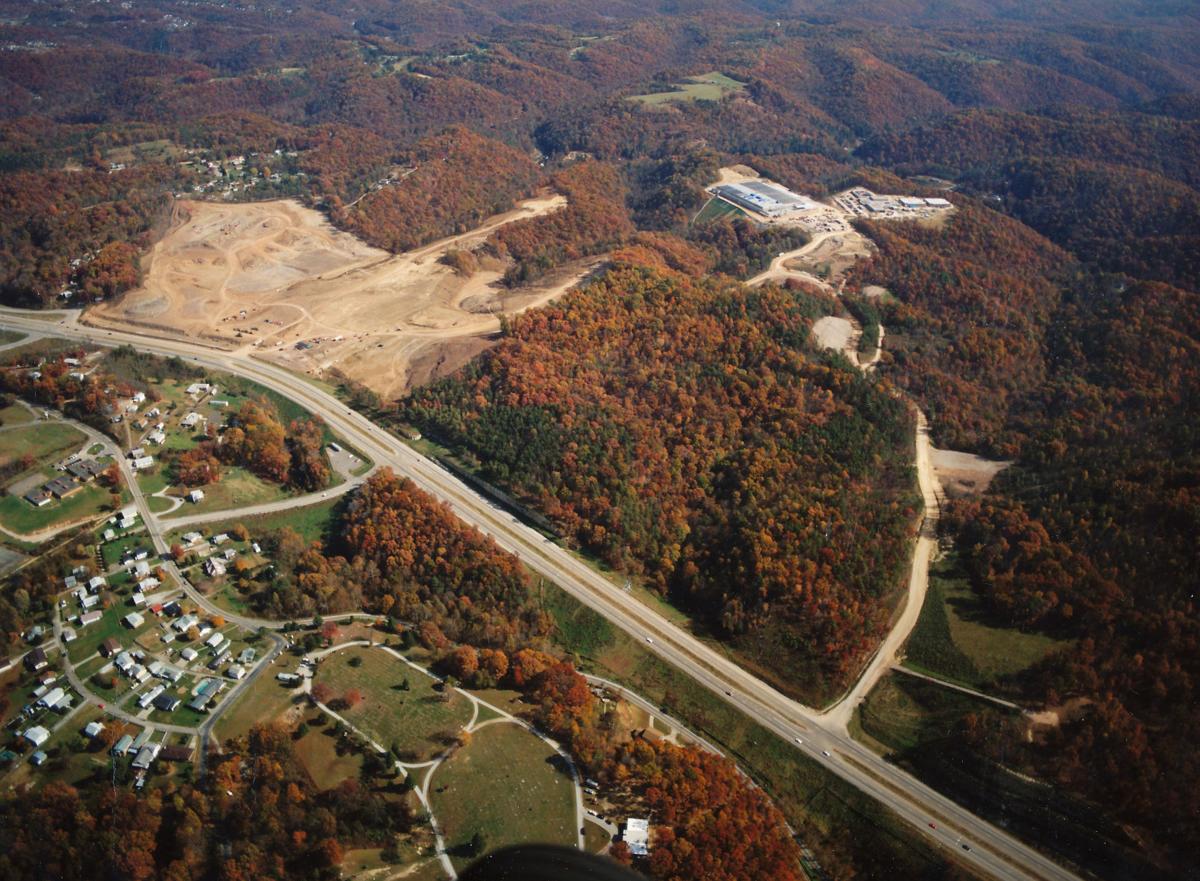 A retail season on the brink: the Southridge Centre site was still bare by October of 1992.

Georgette Rashid George recalls waiting for the right time for her family to launch the original Southridge Centre.

Among the many newspaper clippings Georgette Rashid George saved is one on the left she came across, before joining her dad full time in real estate. She recommended Staples as a potential tenant, and it became one, for about 15 years.

A retail season on the brink: the Southridge Centre site was still bare by October of 1992.

Michael Staenberg had no idea where he was going that day 30 years ago, but he made an impact when he touched down.

“I arrived in Charleston, West Virginia, in 1991 and met Leroy Rashid at Corridor G,” Staenberg, 67, said in a phone interview. “Funny thing is, when I got on the plane, I thought I was going to Charleston, South Carolina. My bad.”

Staenberg is a land developer who made the familiar mistake of thinking he was headed to the better-known Charleston. A wheeler dealer with THF Realty of St. Louis, he landed here expecting to see antebellum mansions and feel smothering humidity, cut by sea breeze.

He saw lush hills and a pretty river cutting through town, but damn the scenery, he had money to make. He met with Leroy Rashid and family, including daughter Georgette Rashid George and brother Richard. The three had been holding on to 300 acres just south of town on what was then W.Va. 214, a simple, two-lane country road. The family bought the land in the 1970s, hoping a new four-lane and utility extension would one day flip their retail dream to reality.

It happened with the help of the Business and Industrial Development Corp., a nonprofit agency designed to do just what its name implied. Agency headquarters, a planned U.S. Postal center and a regional jail were all situated or expected to be situated near the original Southridge Centre “Big 3” — Walmart, Sam’s and Lowe’s. With a pivotal agency and two important public projects planned, it was only a matter of time before W.Va. 214 gave way to U.S. 119, or Corridor G, as the principal link between Charleston and southern West Virginia.

By 1987, Staenberg recalled, four lanes had been completed to the retail mecca now known as “Southridge.” That development is just one of three in the area. The Shops at Trace Fork and Dudley Farms are the others.

“Dad had taken bankers out there for years and years,” George said. “What happened was infrastructure. The highway developed on both sides. Once the highway opened, the rest became history.”

Before highway expansion, motorists turned off the Southside Expressway, ducked through an underpass and headed up 214. That took them into the country. It is no mistake Dudley Farms bears the moniker it does. It had served as the Dudley family’s working farm.

A high-energy, bombastic sort, Staenberg recalled that when he first saw the Rashids’ planned development, Leroy “was moving dirt and had no deals. I immediately went to work and got Walmart and Sam’s.”

George depicted those early efforts as more of a team venture, citing her father’s early overtures to the banks — pre-road construction — and her uncle’s early financial backing.

“There was a pent-up demand for a power center,” she said, describing such a beast as a mass-appeal, big-box type of business environment that continues to rule today. “You needed a shopping center anchored by something big.”

George recalled early attempts at the genre that came close. Situated in a ragtag part of town and across the river from a sewer plant, Hill’s and Big Bear on Patrick Street never captured the public imagination.

Plaza East on Morris Street, even with a theater, rose to its greatest notoriety as the early favorite to be the Appalachian Power Park site. It now serves as the park’s game-day parking lot. The state unemployment office is its most noteworthy tenant.

George hangs onto newspaper clippings from the era, some showing dirt still being moved as late as fall 1992. But the area had begun to generate buzz, and by the time the group lobbied Department of Transportation officials for a turning lane into the development, the fledgling enterprise began to lift off.

The 1990s were indeed a launching pad decade for Walmart, and the Charleston location did not buck the trend. Anyone living in Charleston in the 1990s remembers frequenting Walmart, and possibly Sam’s, at first for the novelty. Upon a couple visits, a shopper realized Walmart contained seemingly every item ever made under one roof.

At the same time, Charleston Town Center held its own. Plenty of Charlestonians have fond memories of the grand Christmas tree at center court; the iconic, three-story fountain; a warm, homey atmosphere; and the sense of community the mall provided in its heyday. Kaufmann’s, later to be Macy’s, offered a sterling men’s section, with lots of Polo and Tommy Hilfiger clothes. The 1990s were not for Charleston. Those years were also good for the rest of the country.

Then-mall owner Forest City Enterprises put $10 million into a 2012 renovation, but two years later a chemical spill seemed to cast a pall over the town and economy. That year signaled a population loss that continues today.

A 2015 Lee Street parking garage shooting grabbed headlines, as did other security-related concerns. On top of it all, the parking garages need $5 million in deferred maintenance, one the new owner appears unwilling to take on.

Forest City wound up defaulting on a $100 million loan with U.S. Bank in the fourth quarter of 2017, leading the mall to its current state. It had fallen a long way from the grand Christmas trees in center court and snaking lines of kids to see Santa.

The common wisdom goes that the mall killed downtown and Southridge killed the mall.

By the time population started falling, Southridge had asserted itself as Charleston’s retail hub. A 1998 Daily Mail story pointed to one of Leroy Rashid’s pitches:

“[Rashid] is fond of pointing out that Town Center is built on 26 acres and Southridge has more than 25 acres — of free parking, in front of Wal-Mart and Lowe’s.

The original Southridge is still in good shape. Two major additions have been outdoor supply store Cabela’s and Home Depot. Big Sandy Furniture is also there, as is Marquee Cinemas and a golf driving range. The Rashids retain seven sizable parcels for development.

In 1992, the Rashids trumpeted a beginning. Southridge turned out to be only that. Lowe’s eventually departed for the yet-to-be Shops at Trace Fork, developed by Staenberg and THF Realty partner Stan Kroenke. Kroenke and Staenberg also developed Dudley Farms.

Kroenke parlayed his real estate background into particularly rarefied air. Kroenke, 74, is the billionaire owner of English soccer clubs, the Los Angeles Rams, the Denver Nuggets and the Colorado Avalanche of the NHL. His wife, Ann Walton Kroenke, is the daughter of Walmart co-founder James “Bud” Walton.

Shortly after the turn of the century, The Shops at Trace Fork would boast Target, Lowe’s (moved over from Southridge), Dick’s Sporting Goods, PetSmart, Best Buy, Marshall’s, a Holiday Inn Express and the South Charleston Ice Arena. Another big-box bonanza, with a classy ice rink to boot.

Trace Fork wound up going to South Charleston and Dudley Farms to Charleston. Both cities have benefited from hundreds of millions of dollars in sales taxes and increased property taxes since construction, though they have had to extend services.

Barring divine intervention, it does not appear Charleston’s retail landscape will change soon. Downtown Charleston attracts weekend nightlife. A few restaurants do brisk business. Taylor Book’s is a treasure, as is Ellen’s Ice Cream. A few small, interesting businesses dot the area but so do a plethora of For Lease signs.

Things look rosy on Corridor G. Bursting. So much retail, in fact, that one must wonder whether the mall should bother continuing in retail at all, or whether a planned development on a former fly ash pond in South Charleston has a puncher’s chance.

Between three major developments at Southridge lie some 2 million square feet, encompassing about every retail or food variety one could hope to enjoy.

A couple weeks ago, a rainy day did not stop Walmart action. Robert and Heather Fulton, 35 and 43, were loading groceries into their car.

“This is more like a one-stop shop,” Heather Fulton said. “Walmart, Sam’s, furniture, sporting goods, you name it.”

She said she has fond memories of Town Center but feels little desire to go now. The Elkview couple seldom venture downtown, though they might have been more inclined to do so five or 10 years ago.

John Callahan, 70, of Lincoln County said he’d like to return to the days of mom-and-pop stores, but he’ll settle for the Southridge area.

“I remember when this wasn’t nothing but a pine thicket,” he said. “Growing up, I never thought we’d find a store that sold everything.”

It all started with road construction, the Rashids’ burning desire to cash in on that land and the indomitable Staenberg. At 67, he always sounds like he has somewhere to be. He said he flew to Charleston once a week from 1991 until 2011.

“I knew things would be good, with Walmart and Sam’s,” Staenberg said. “With those two powerhouses, I knew we’d have a good center. I enjoyed myself. I liked the rural scenery, the people.”

Charleston did not quite move fast enough for his liking, he said, but he made dear friends.

He never saw any of the old South, but discovered Charleston, just waiting to be explored.

You Can Help Save A Life

A Change Of Heart On COVID-19 Vaccination