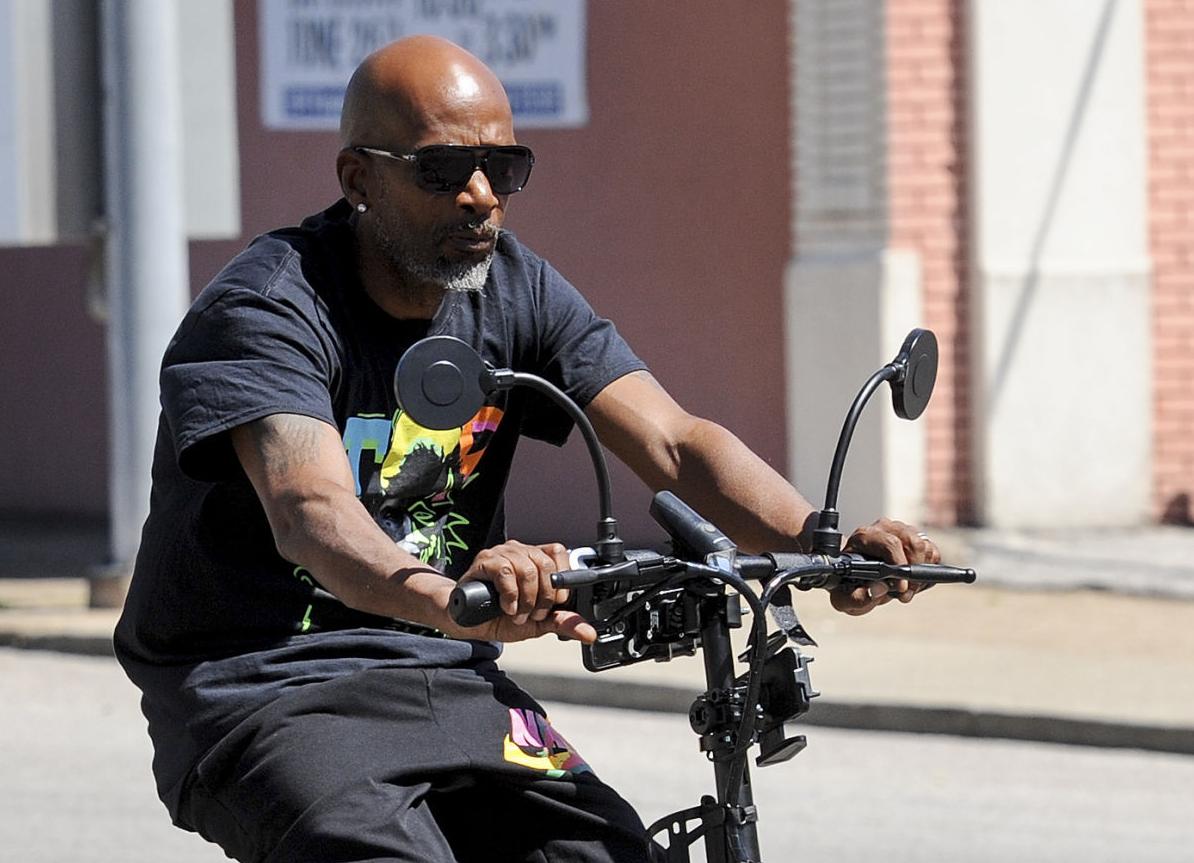 Curtis Givens rides his electric bike on Virginia Street in Charleston’s West Side on Tuesday. Electric-powered bicycles have become more popular during the coronavirus pandemic. 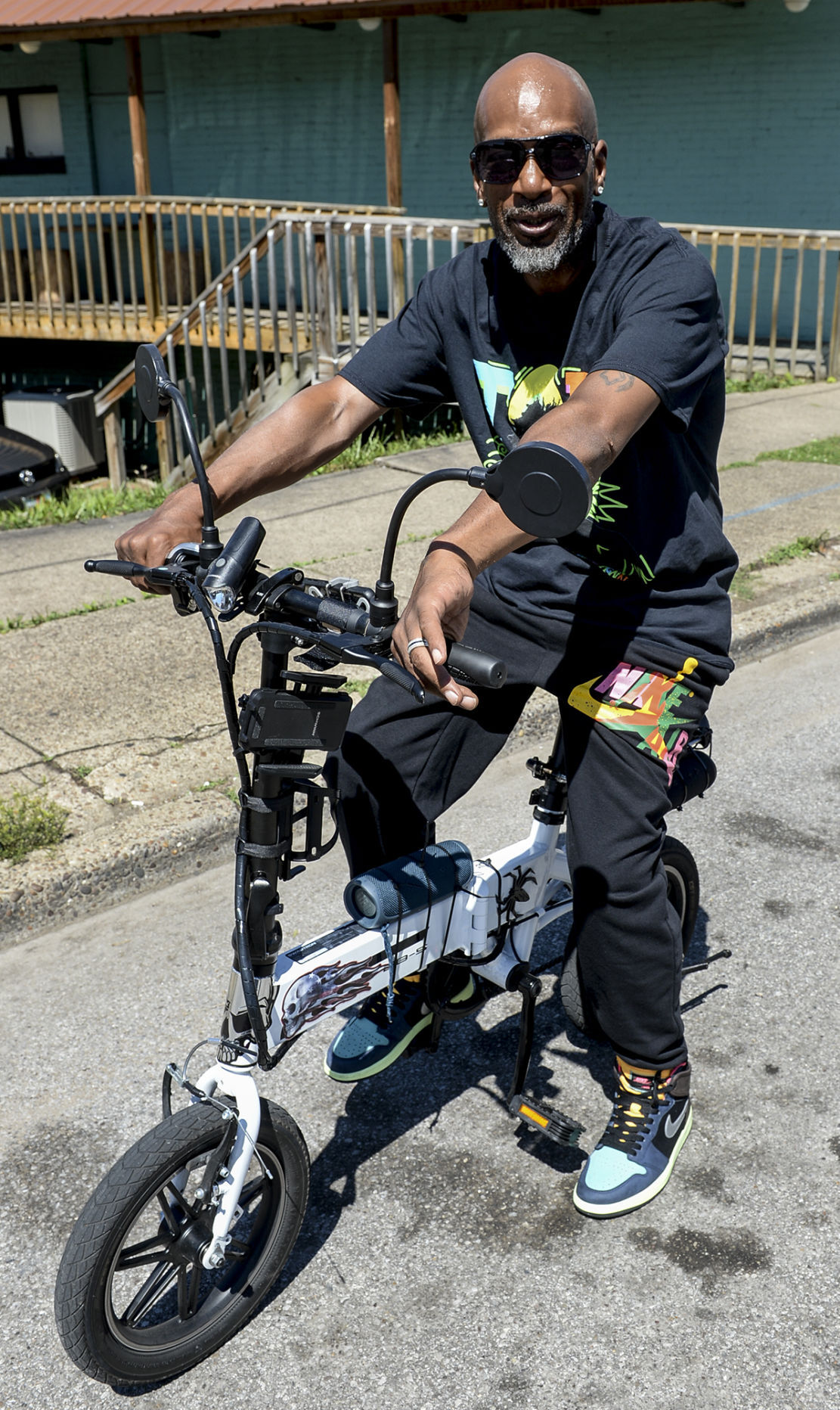 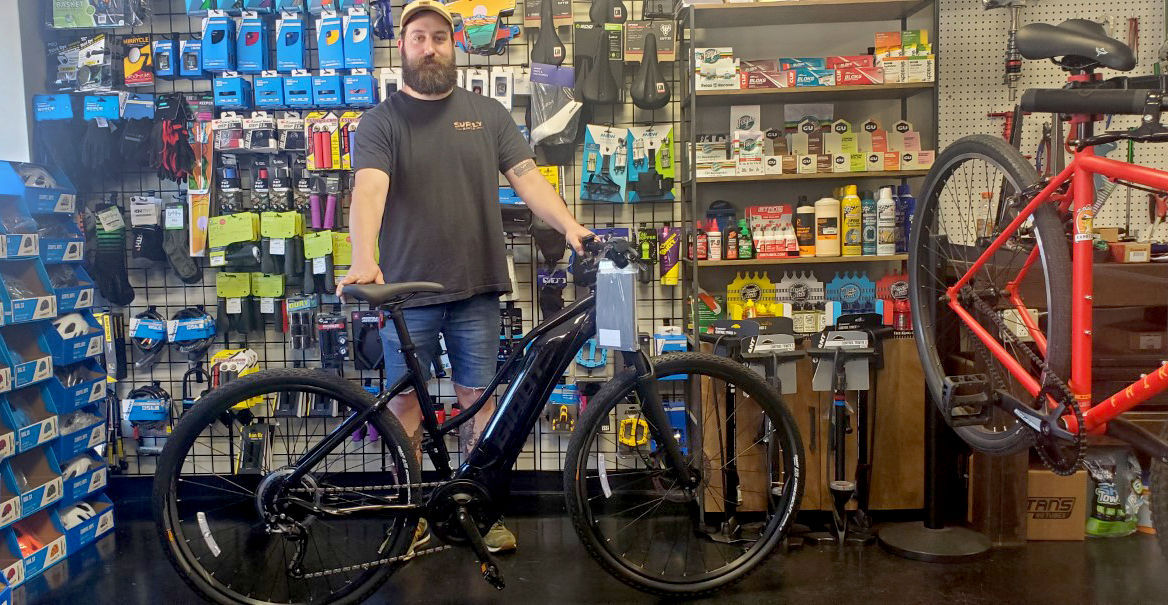 Brandon Kline, owner of Elk City Cycles, displays the Giant electric bicycle for sale in his shop on the West Side.

Curtis Givens rides his electric bike on Virginia Street in Charleston’s West Side on Tuesday. Electric-powered bicycles have become more popular during the coronavirus pandemic.

Brandon Kline, owner of Elk City Cycles, displays the Giant electric bicycle for sale in his shop on the West Side.

Electric-powered bicycles, or “e-bikes,” are starting to catch on in Charleston. It’s taken a while, but it can’t be blamed on our natural tendency to miss the cultural zeitgeist. Rather, two other familiar culprits loom — lack of funds and COVID-19.

To sunny-in-nature, slight-in-build Curtis Givens, e-bikes might as well have been a staple here for decades. He loves his two-month-old purchase.

“Oh man,” the slick-pated Givens, 51, said, “Everything is within my control. It’s just like a regular bike, but something that makes the wind go through your scalp. For real, man.”

Givens’ vehicle of choice is a Swagtron brand, for which he paid $500. It folds in the middle to reveal the charging port for the 250-watt battery. It uses a rear wheel mounted motor.

His is one of the less expensive models available. Electric bikes run anywhere from Givens’ basic model to a Delfast TOP 3.0, which boasts a motorcycle-style look, remarkable 200-mile range, a top speed of 50 mph and a $6,649 price tag. Established, high-end regular bicycle makers Trek and Specialized also produce e-bikes in the same price range.

Electric bikes are powered by batteries charged from a garden variety wall outlet. Some are miniature, such as Givens’ baby and others full size. The differences in quality can be numerous — larger battery lives; larger motors contained in the middle of the bike as opposed to mounted on the rear wheel hub, a superior configuration according to experts; and other bells and whistles that ultimately separate all goods.

An e-bike is also equipped with pedals. If, for instance, Givens gets too carried away cavorting about the West Side and lets his battery run out, he can always pedal home. Riders who may not want to tackle steep hills can kick in the battery for help.

E-bikes had been selling steadily in the past several years, but took off worldwide in the heart of last year’s pandemic, according to Forbes magazine. “During the first European lockdowns in March and April [of 2020], a surge in demand led to bicycle shortages as bicycle shops — which were allowed to remain open — quickly sold out of stock,” Forbes reported.

Brandon Kline, owner of Elk City Cycles, said he’ll believe it when he sees it. It’s not that he is against e-bikes. He wants to sell anything from his fledgling shop, which opened in September 2020.

Kline placed his initial inventory order when the shop opened, and has received about half of it. COVID-19 has disrupted supply lines and

shut down factories, including recently a Shimano component facility in Malaysia due to an uptick in positive cases.

“Bicycle availability — bicycles of all kinds — have really suffered in the last 10, 11 months,” Kline said. He has a single e-bike on hand, a Giant brand that retails for $2,450.

“I think your e-bike enthusiast is perhaps not as well-versed in what high-end bicycles sell for,” Kline said, “where a traditional cyclist is used to these prices. This price is not bad for a top-brand, entry-level bike.”

Kline readily admits folks are enthused about e-bikes. His Giant bike comes equipped with five assist levels. “They’ve definitely picked up in popularity. There are more of them out there than I’ve ever seen. I’ve had more inquiries and people checking them out than in the past.”

As for Givens, he has bigger plans. He and an e-bike buddy want to insert a battery in the frame of a full-size bike and run wiring to a large, internet-ordered motor mounted on the rear wheel. He already has battery-powered blue lights flashing on the wheels. His current Swagtron is outfitted with battery-powered, cylindrical speakers that resemble small rockets.