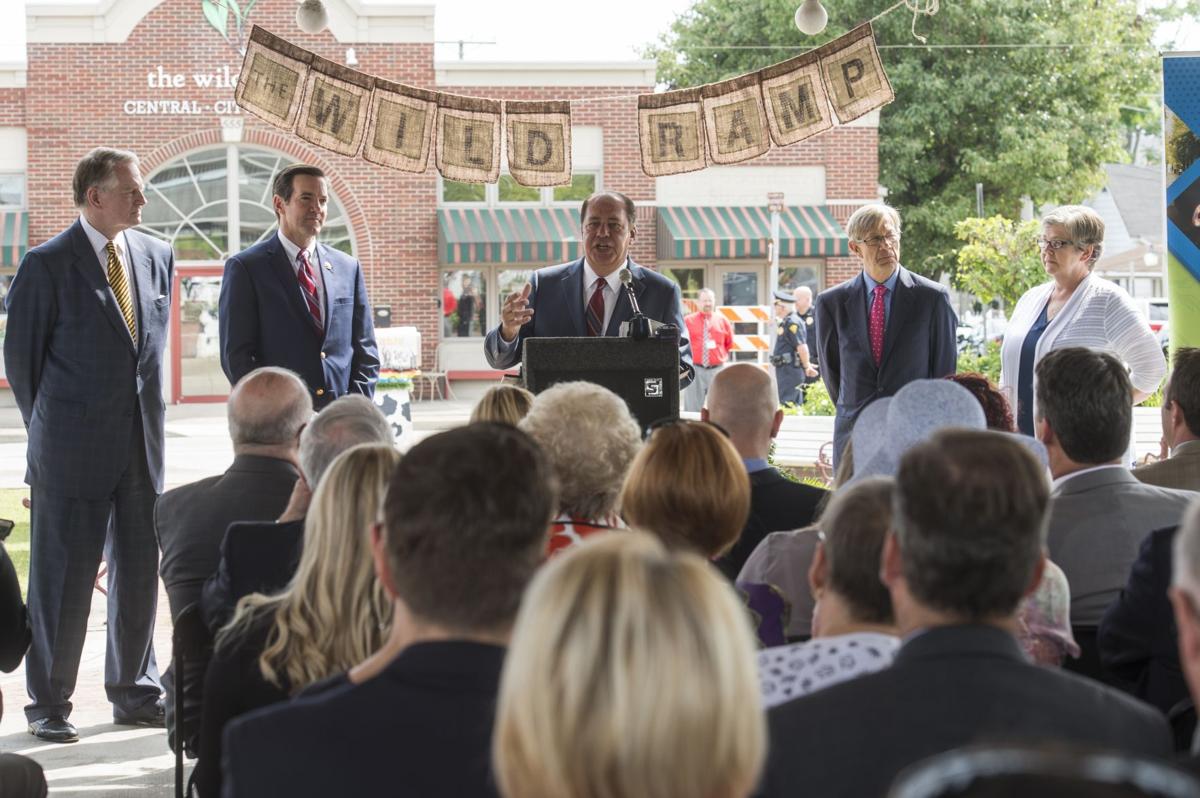 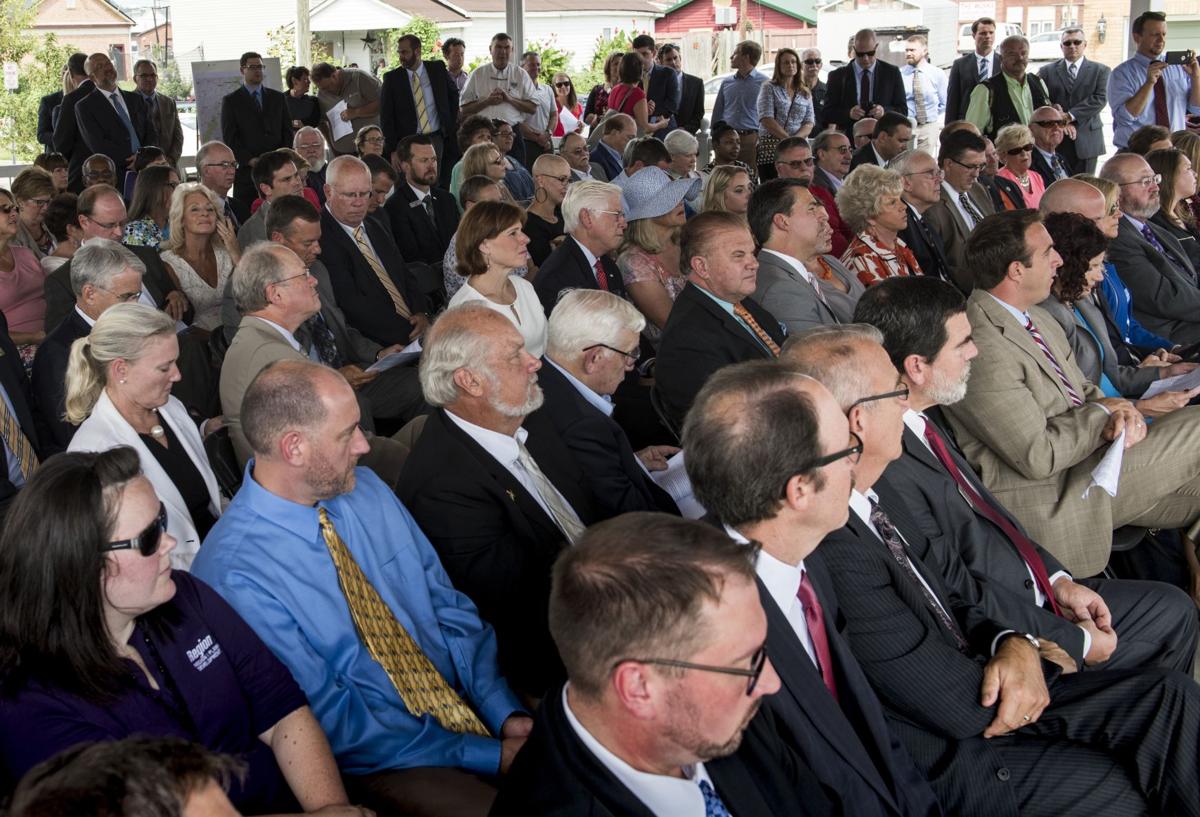 A large audience listens to federal and state officials announce $38.8 million to strengthen coalfield communities West Virginia, Kentucky, Ohio and other states in the Appalachian region in Huntington on Wednesday. 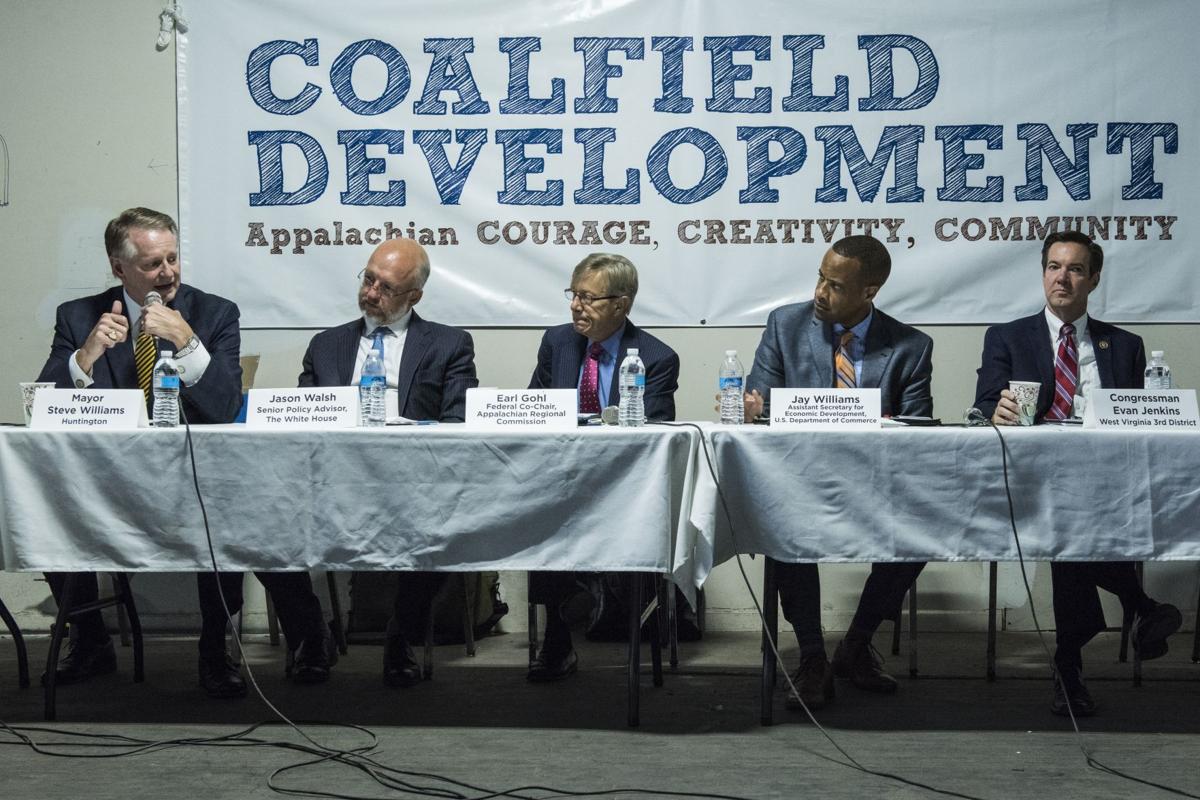 A large audience listens to federal and state officials announce $38.8 million to strengthen coalfield communities West Virginia, Kentucky, Ohio and other states in the Appalachian region in Huntington on Wednesday.

HUNTINGTON — Millions of dollars are being disbursed to groups in West Virginia and other coalfield communities throughout the country as part of President Barack Obama’s POWER initiative.

State and federal officials gathered in Huntington Wednesday to announce more than $38.8 million in funding for groups in West Virginia, Kentucky, Ohio, Virginia, Pennsylvania and Alabama.

Groups in the Mountain State will receive around $16.4 million, or more than 40 percent of the federal money, which will help advance efforts in education, infrastructure improvements, business development, manufacturing expansions and workforce training.

The grants are part of the Obama administration’s ongoing push to disburse billions of dollars into regions of the country that are being disproportionately affected by the decline of the coal industry — the result of slumping foreign markets, low-priced natural gas, the higher cost of mining in Central Appalachia and federal regulations meant to reduce air pollutants.

“Those impacts have not been spread evenly across the country,” said Jason Walsh, one of the president’s senior policy advisers, who spoke at a roundtable discussion before the grant announcements.

Walsh and the other federal officials who were in Huntington Wednesday emphasized that the $38.8 million in federal grants could be just the beginning. The White House is calling for Congress to approve $9 billion in spending for redevelopment efforts in coalfield communities next year.

Those investments, Walsh said, are not just being pushed by one political party. He recognized the work of congressional members like Rep. Evan Jenkins, R-W.Va., and Rep. Hal Rogers, R-Ky., who voted for the current round of grant funding that was approved last year.

“I emphasize that because we hear a lot about partisanship in this country and we hear it in D.C.,” Walsh said.

Jenkins, who represents Southern West Virginia, agreed with the need for bipartisan support for the development funding.

“There’s so much more need than there are resources that are available,” Jenkins said, adding that he would “continue shoveling” to try to help distressed communities in the state.

The largest grants for West Virginia included $2.5 million for water infrastructure improvements near the Mercer County Regional Airport, $2.1 million for entrepreneurial education in Charleston, $2.28 million for an innovation business center in Buckhannon, $1.87 million for workforce training programs with Coalfield Development, $1.82 million to expand the hardwood manufacturing business in Elkins, $1.64 million for water and sewer improvements at the Mingo County Airport, $1.37 million in relation to the Hatfield and McCoy Regional Recreation Authority and $1.25 million for the Natural Capital Investment Fund in Shepherdstown.

U.S. Assistant Secretary of Commerce Jay Williams emphasized that the grants are meant to help West Virginia make it through the initial steps of diversifying the state economy, as the coal industry is expected to continue to decline.

“When you rely on one economy for so long and that economy starts to falter, it has big impacts,” he said.

The former mayor of Youngstown, Ohio, empathized with West Virginians. He compared the current state of West Virginia’s economy to eastern Ohio’s in past decades when the region’s steel mills began to close and layoff workers.

“For generations, we were defined by the manufacturing of steel,” Jay Williams said. “When that collapsed and went away, we spent some time being bitter, with a chip on our shoulder.”

But that attitude isn’t productive. At some point, he said people have to have a “come to Jesus” moment and realize the economy is not going to change back to the way it was.

“Coal, which is what prompted our effort right now, did a lot for the state,” West Virginia Commerce Secretary Keith Burdette said. “But times are changing. We acknowledge that.”

In the past, the coal industry built an economy where there otherwise wouldn’t have been one, Burdette said, but West Virginia’s almost sole reliance on a single industry has had lasting cultural effects on the state too.

The current global economy has made it essential for people to gain skills and education past a high school diploma, but Burdette said high-paying jobs in coal mines had offered an incentive for a large portion of the population not to seek out higher education.

“I’ll tell you what the coal industry did not do for us,” Burdette said. “It didn’t promote education.”

Before the grants were announced, one of the main points of discussion at the economic roundtable was the need for West Virginia and the Appalachian region as a whole to improve its broadband services.

Many of the panelists lamented the state’s current broadband coverage and speeds. They explained that a reliable internet connection can offer economic opportunity no matter where you are at in the country.

That is why the Upshur County Economic Development Authority is going to use its grant funding to create an office space with 1 gigabit internet speeds that can either be leased or shared by business startups in Buckhannon.

“You can’t be a tech company and wonder if you can get wifi somewhere,” said Eric Seto, the chief operating officer of Interapt, a Kentucky technology company.

Several of the grants were for simpler infrastructure improvements, like water and sewer installations, but Williams said those projects are no less important.

“That is innovation,” Williams said. “It’s not always sexy or glamorous, but it’s innovation.”

One of the smaller grants that West Virginia received is for Gov. Earl Ray Tomblin’s development plan for the Hobet surface mine, which he pitched during his State of the State address earlier this year.

The West Virginia Development Office will be receiving $200,000 from the federal government to help develop a detailed plan for the Boone County surface mine, which Tomblin wants to connect with a $99 million highway.

The governor has pitched the project as the state’s best hope of diversifying the southern West Virginia economy.

During his speech on Wednesday, Tomblin said all of the grants offered a positive step for the state.

“With the downturn in the coal industry, we in the state and federal governments owe it to those who have lost jobs through no fault of their own to do everything possible to create new economic growth,” Tomblin said. “The projects being funded envision a West Virginia where promising new job opportunities are a reality.”