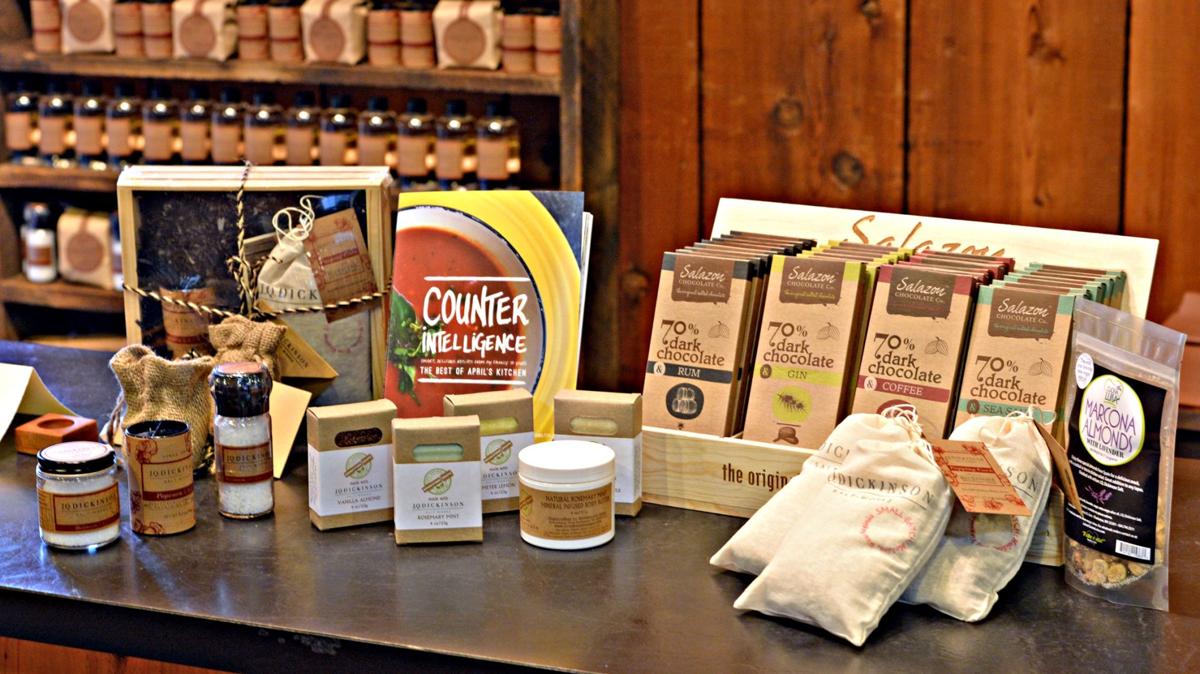 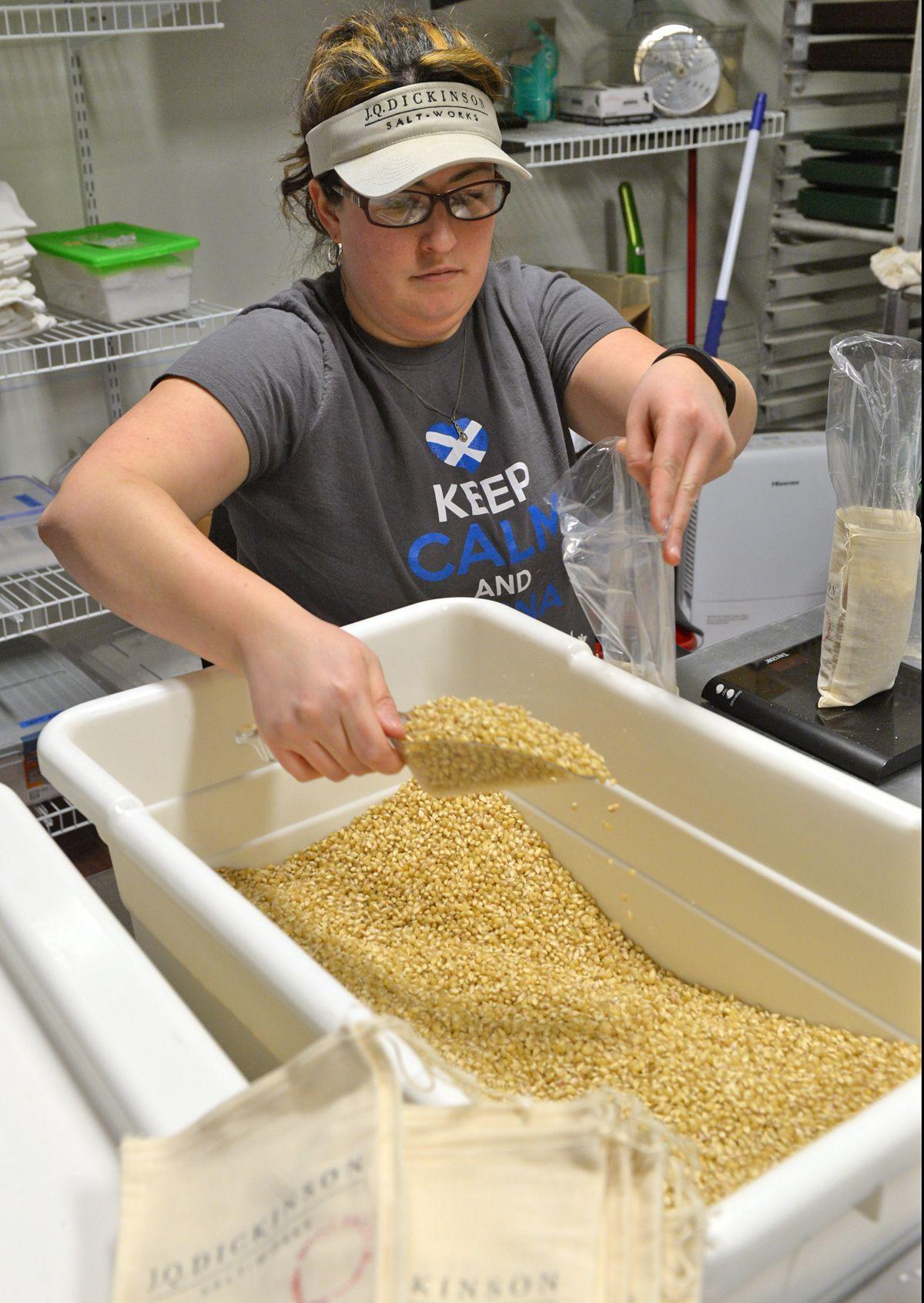 Megan Parker, an employee of J.Q. Dickinson Salt-Works, bags some popcorn from Bluestone Mountain Farm, in Hinton, to go with the company’s popcorn salt.

Megan Parker, an employee of J.Q. Dickinson Salt-Works, bags some popcorn from Bluestone Mountain Farm, in Hinton, to go with the company’s popcorn salt.

It’s been less than three years since Nancy Bruns and her brother Lewis Payne revived their family business, J.Q. Dickinson Salt-Works, in the small town of Malden.

“We established our business in April of 2013, put our well in in May and were on the market in November,” Bruns said.

Since then, the company has expanded in every aspect, from its physical size to the number of restaurant and retail partnerships to its product line.

To put it simply, the salt business has been pretty sweet.

And it’s getting sweeter.

Currently, J.Q. Dickinson Salt-Works is supplying its salt to over 325 restaurants and retailers across the country, including The French Laundry, Thomas Keller’s famed French restaurant in Napa Valley.

“It’s one of the best restaurants in the world,” Bruns said.

“That’s a big feather in our cap as well, that he’s considering using it,” Bruns said.

On the home front, the company acquired the adjacent Terra Salis property in December. The purchase brought more space, but also more expense.

“Terra Salis used to take care of all of this,” Bruns said, motioning to the open field outside of the J.Q. Dickinson Salt-Works office.

“But now, it’s up to us. So, that’ll be a cost, but we also think it’s a great opportunity for us to expand and grow.”

Which they’ve already started to do.

Since last spring, J.Q. Dickinson has added popcorn and grinding salt — as well as a collection of other items made in collaboration with other regional producers — to their line of products, which already included heirloom salt, nigari (a mineral-rich byproduct of the salt-making process) and branded accessories.

“We’ll always be a salt-works, but our salt touches so many different things,” Bruns said.

“There’s only so much salt you can buy, and you don’t go through it very quickly, so it makes sense to expand the product line. We’re feeling our way through that.”

The popcorn salt, which can be purchased individually or packaged with heirloom popcorn from Bluestone Mountain Farm in Hinton, came out last spring.

“I searched out a popcorn because I knew I wanted to do a popcorn salt,” Bruns said.

From there, a partnership was born.

“They’ve pretty much took the ball and ran with it,” Dortch said. “I’m thrilled to collaborate with them. It’s helped bring me business and I’ve made contacts from places that I wouldn’t have thought.”

The combination is a tasty one, too.

“The salt is kind of a moist salt,” Dortch said. “It sticks to the popcorn and not the bottom of the pan. It’s a great snack.”

However, even though it is called popcorn salt, Bruns said that the crystals are similar to table salt, so it can be used in a variety of ways, not just for popcorn.

The grinding salt, on the other hand, is a coarser, larger crystal, sold with a refillable glass grinder to keep things environmentally friendly. It was released last fall.

“We had a lot of requests for grinding salt,” Bruns said.

Also in the food realm, J.Q. Dickinson Salt-Works salt is used in Cucina Luisa’s Marcona Almonds with lavender, a line of Virginia Cocktail Peanuts, which will hit the stands in March, and Salazon Chocolate Company’s (out of Sykesville, Maryland) new series of artisan bars.

“It’s dark chocolate, so it’s not overly sweet, but if you add salt to it, it actually brings the sweetness out,” Bruns said.

Outside of the culinary world, J.Q. Dickinson has partnered with Brookstone Soaps, of Huntington, on a line of luxury salt soaps in four fragrances (vanilla almond, lavender with goat’s milk, rosemary mint and Meyer lemon).

“Salt soaps are very good soaps,” said Sharon McMillion, co-owner of Brookstone Soaps. “They’re good for your skin. They exfoliate, but it isn’t gritty. It doesn’t feel that way going on.”

“Skin is a great way to absorb minerals into your body, so it made sense to infuse that into the body butter,” Bruns said. By adding the nigari, people can get a dose of magnesium, potassium, calcium, copper, zinc and other nutrients.

“We wanted to make something that was a true West Virginia product,” Brookstone Soaps co-owner Sharon McMillion said. “We live in Huntington, we make everything we sell ourselves.”

The soaps have been out for about a month, and the body butter came out earlier this week.

“We’ve had other people approach us,” Bruns said. “We thought we’d try and just see how it goes. [The soap has] been very well received.”

Later this year, J.Q. Dickinson plans to release a ramp salt, using dried ramps from Fish Hawk Acres in Rock Cave; an applewood smoked salt, made with locally sourced wood; and, later in the fall, a caramel, which they often use for tastings.

Bruns said a long-term vision includes items such as cheeses or pickled vegetables that other producers make by using their salt, and eventually, “become sort of an Appalachian food hub.”

“Around every turn, we’re looking to make partners in West Virginia,” Bruns said. “That’s important to us.”

She added that she hopes to double the company’s production in 2017.

J.Q. Dickinson Salt-Works, 4797 Midland Dr., is open 9 a.m. to 4 p.m. Monday through Friday. Tours are held Tuesday through Saturday from May through November. For more information, visit jqdsalt.com or call 304-925-7918.