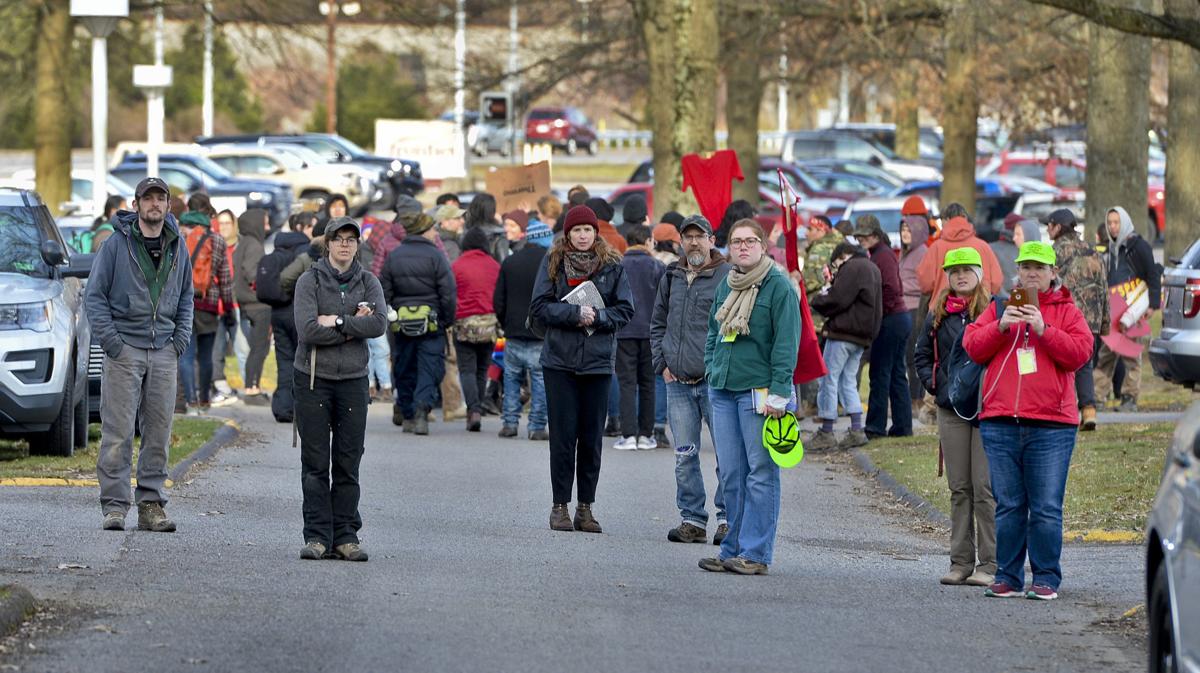 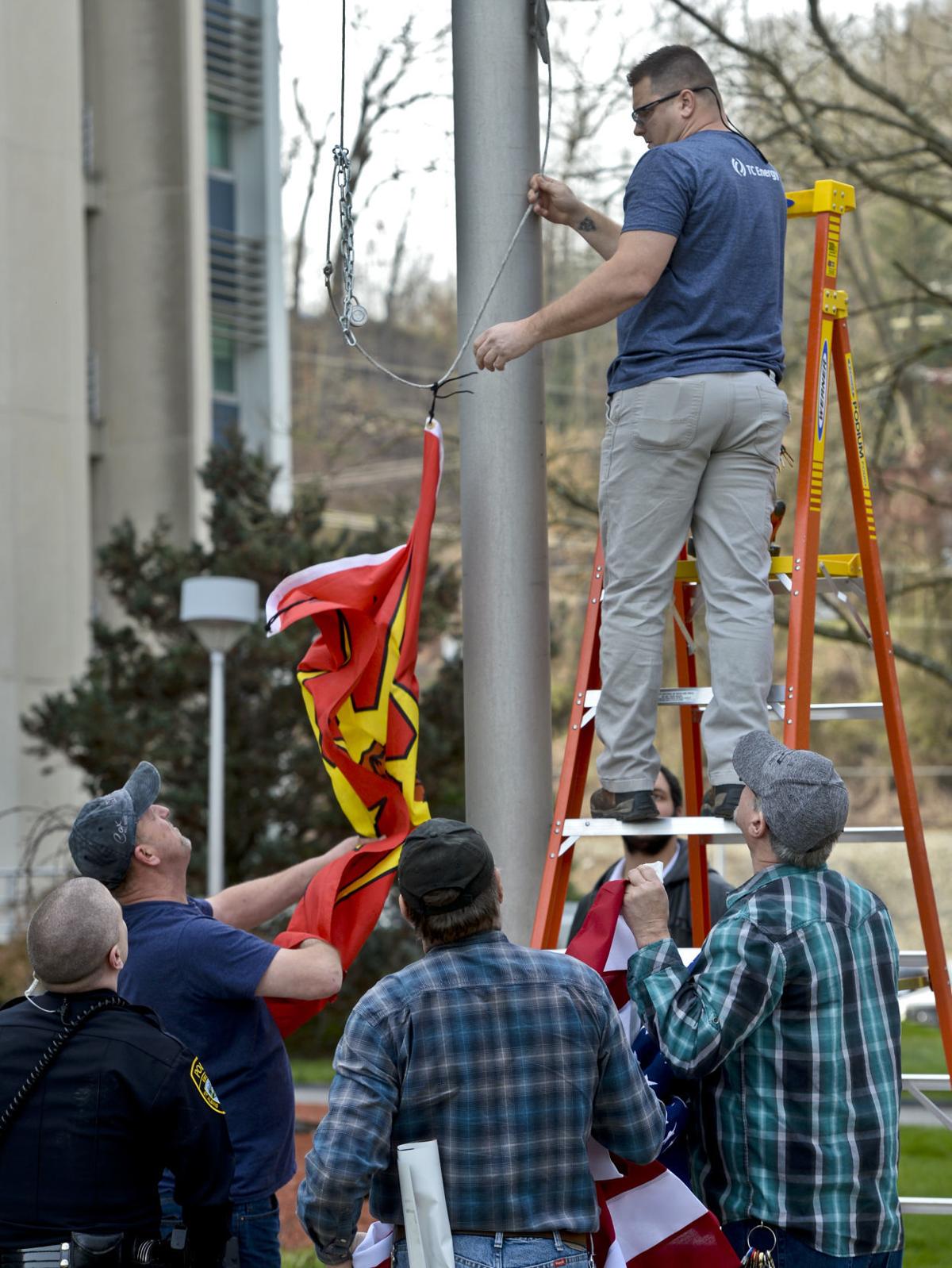 A TC Energy employee takes down a flag that protesters had put up during their early morning protest. 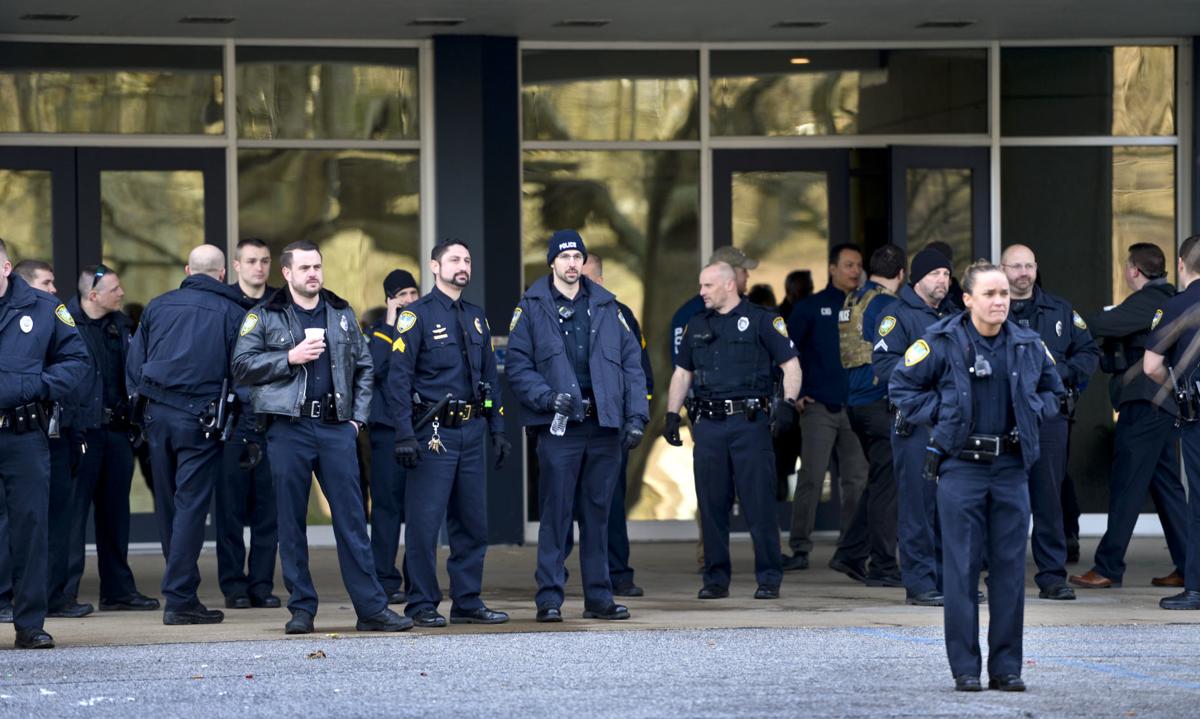 Police from all over Kanawha County responded to calls from TC Energy where protesters came into the building early Monday morning.

A TC Energy employee takes down a flag that protesters had put up during their early morning protest.

Police from all over Kanawha County responded to calls from TC Energy where protesters came into the building early Monday morning.

About 70 demonstrators rallied at the TC Energy Building (the former Columbia Gas building) in Charleston on Monday to protest the planned construction of the Coastal GasLink Pipeline through tribal lands in the Canadian province of British Columbia.

There were no arrests, but TC Energy officials told Charleston police they planned to press charges against protesters, when and if their identities are known and verified.

The protest began shortly after 7 a.m., when the protest group — most affiliated with Appalachians Against Pipelines — gathered outside the entrance to, and in the lobby of, the MacCorkle Avenue building. TC Energy, formerly the TransCanada Corporation, acquired the building as part of its $10.2 billion purchase of the Columbia Pipeline Group in 2016.

The Charleston protest was a show of “solidarity with the Wet’suwet’en struggle to defend their unceded territory from TC Energy’s Coastal GasLink Pipeline and the Canadian government,” according to a statement posted on Appalachians Against Pipelines’ Facebook page.

TC Energy’s plan to build the 416-mile pipeline, extending from northeastern B.C., through Wet’suwe’en lands, and on to a port on the province’s Pacific Coast, was made without first reaching an agreement with the tribe to do so, according to tribal leaders.

In early February indigenous Canadians supporting Wet’suwe’en pushback on the Coastal GasLink pipeline began blocking trains across the country, disrupting passenger travel between Montreal and Toronto and shipments of grain and lumber from western Canada. The Canadian Supreme Court recently refused to hear several appeals dealing with the pipeline.

Though an agreement reached between the Canadian government and Wet’suwe’en community’s hereditary tribal leaders, the trains recently resumed operation.

During Monday’s protest, demonstrators bore signs emblazoned with “Solidarity with Wet’suwet’en,” and “Respect Indigenous Rights,” and raised a flag representing an indigenous rights warrior from the TC Energy flagpole. Several of the protesters chained their necks together.

After Charleston police received word of the protest, a request was made for assistance from neighboring jurisdictions. That precautionary step was taken due to the unknown size of the crowd, a lack of information about their intentions, and the fact that some of the protesters were inside the building, according to a release issued by Charleston Police Chief James Hunt.

Dozens of police from other Kanawha Valley cities joined Charleston police officers and State Police in responding to the situation. Both Kanawha Metro 911 and the Charleston Fire Department deployed mobile command units to the scene.

According to Hunt, protesters were told they were free to exercise their right to protest but needed to do so off TC Energy property. After being told that failure to leave could lead to arrests, most protesters chose to leave, but those who opted to remain in place were physically removed by police, some suffering “minor injuries such as scrapes and a few bruises.”

According to the Appalachians Against Pipelines Facebook post, protesters “were repeatedly pushed around and roughed up, but luckily no one was seriously injured.”

After two female protesters, who had locked themselves together, had their metal links removed by police and paramedics, the protesters dispersed, according to Hunt.

Before changing its name to TC Energy, the TransCanada Corporation began work on the controversial Keystone Pipeline, which now carries gas from shale sands in northern Alberta to pipeline junction in Nebraska.