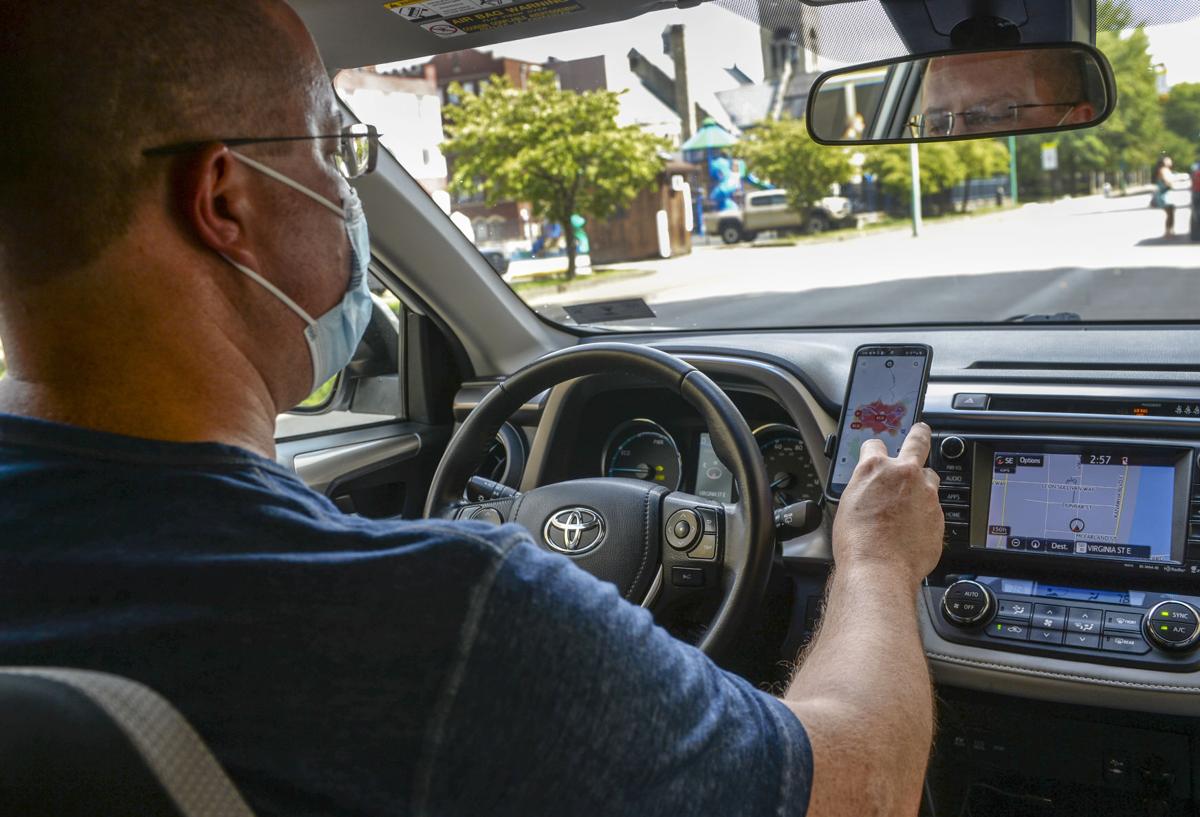 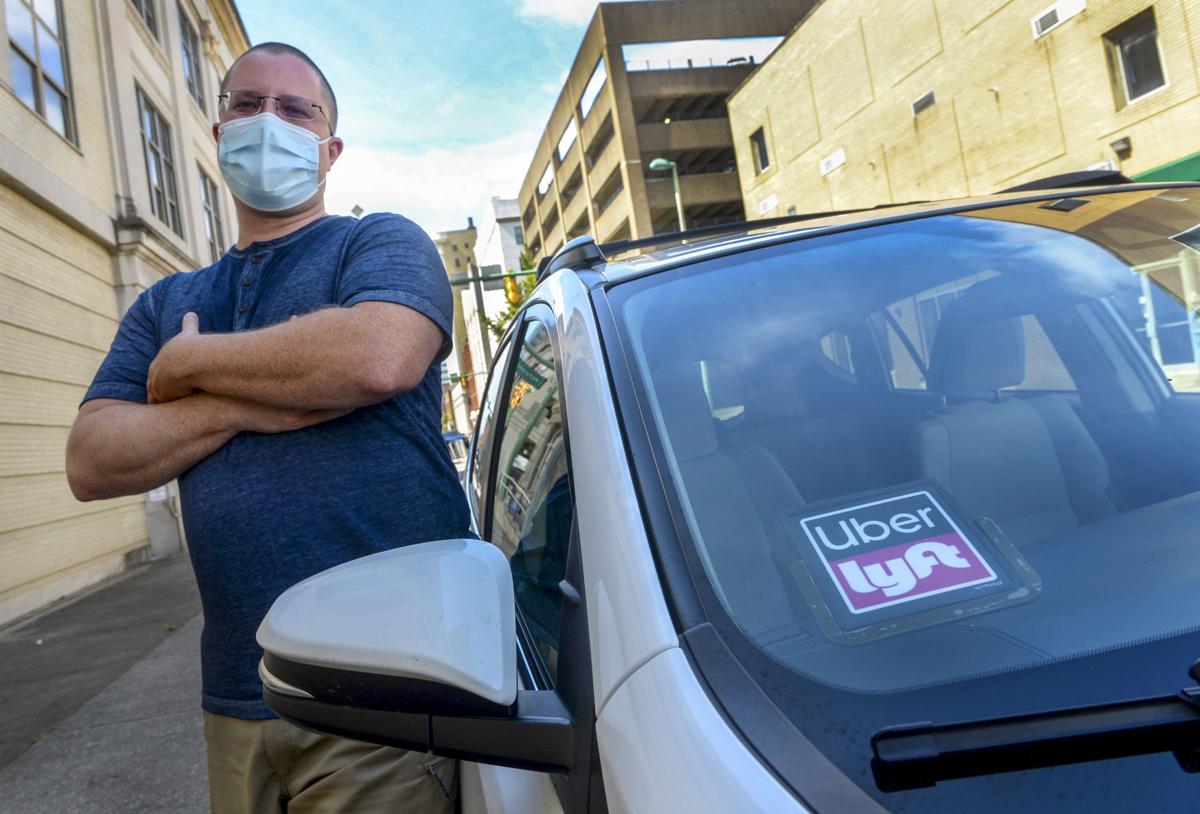 Ride-hailing service driver Matthew Dionne stands next to his 2017 Toyota RAV4 Hybrid. Since purchasing the vehicle used a year ago, Dionne said it has already logged more than 100,000 miles.

Ride-hailing service driver Matthew Dionne stands next to his 2017 Toyota RAV4 Hybrid. Since purchasing the vehicle used a year ago, Dionne said it has already logged more than 100,000 miles.

Yet Matthew Dionne kept applying elbow grease to the outside of his already spotless white 2017 Toyota RAV4 Hybrid. On a muggy September afternoon, the interior of the vehicle was comfortably cool and clean. Dionne’s smartphone was mounted on the dashboard while a GPS glowed in the center console — both within arm’s reach. The now-reassuring smell of disinfectant was noticeable even through a mask.

Much like the rest of the world, the ride-hailing industry is evolving on the fly while struggling to maintain pre-pandemic revenues. That includes adjusting a simple business model in which people digitally request a ride, drivers pick them up and payments are made electronically.

Uber, one of the pioneers of the ride-hailing industry, announced earlier this week that potential riders must take a selfie while wearing a mask before they can request a ride. The new initiative, which goes into effect at the end of the month, expands upon an order issued in May requiring drivers to take similar photos showing their mouths and noses were covered.

According to Uber, its drivers have completed more than 100 million mask verifications over the past five months.

“As you know, these are very fluid times,” Uber spokeswoman Carly DeBeikes said. “And Uber is always reevaluating the situation and looking at ways to improve safety. We will continue to do so as the world moves through this pandemic together.”

Expanding on protocols activated in the spring, Lyft also requires riders and drivers self-certify they are wearing face masks. On July 17, it began to distribute vehicle partitions to drivers to help maintain distance between themselves and riders.

“As we navigate COVID-19 in Charleston, it is clear that Lyft helps connect individuals with essential needs and services,” said Fatima Reyes, communication manager for Lyft. “We are committed to ensuring Lyft is available for those who need it, and that all drivers and riders feel safe and comfortable on the road.”

Still, Lyft, Uber and their peers have a long way to go before they can return to the steady revenue streams they enjoyed before the pandemic.

The ride-hailing business has experienced stark highs and lows since the start of the COVID-19 pandemic. For example, Lyft reported a 61% drop during the second quarter compared to 2019, including a 75% dip in April from the same month the previous year. However, rides were up 78% in July as more states and cities reopened.

Likewise for Uber, which saw a 73% drop in overall second-quarter business compared to 2019. Uber also rebounded in July.

But that hasn’t stopped a shuffling of driver ranks that began months ago when their phones stopped humming with pick-up requests.

Consider the case of Dionne, who began driving for Uber in July 2019 before taking a three-month, self-imposed layoff earlier this year.

As is the norm for Uber drivers, Dionne is an independent contractor and any sort of work stoppage would usually be under his own terms. That’s the route he chose one day in late March when the COVID-19 pandemic further tightened its grip on the world. Unemployment benefits, he determined, were the most sensible short-term option, at least when it came to his own profit-and-loss ledgers.

“It was a really slow day, I think I did about $50 worth in business in about eight hours and that’s before adding in my costs,” Dionne, 40, said from the driver’s seat of his Toyota. “I didn’t plan originally to stop driving. But once the airport flights stopped — we used to get about 15 flights a day and that’s an enormous amount of ride-share business ... plus the restaurants being shut down. So I decided I’d stop because it just wasn’t financially viable.”

He’s since returned to work, primarily to maintain his status as a Diamond Driver. That’s the highest level of a rewards program determined by, among other things, maintaining an average rider rating of at least 4.85 out of 5 over the previous 500 trips. The program provides different incentives tied to each achieving a particular rank, including educational scholarships.

Dionne said that was the biggest enticement for him to return, because the days when he’d make $350 to run someone to Middlefield, Ohio, or the $600 he collected during West Virginia University’s homecoming last year aren’t returning anytime soon. He also noted the amount of ride-share drivers returning to the roads is disproportionately higher than the number of people ordering rides. When maintenance costs are paired with fewer big events, margins shrink.

That was the case for Marti Welker-Jones, of Dunbar.

She was an Uber driver for four years, including two years full-time before giving it up early this year. An initial reason for reeling back her time behind the wheel was because she took another full-time job. Her decision to fully stop was because she specialized in big events, maximizing her tricked-out 2016 Chrysler Town & Country minivan during holidays and WVU football games.

Welker-Jones retired her van in June after it logged more than 250,000 miles, but her time as an Uber drive was already wrapped up. By her estimation, she was spending more money than she was taking in — never mind a pandemic that threatened more than her bank account.

“I got a subscription for unlimited car washes for $20 and it was a lifesaver,” Welker-Jones, 47, said. “But oil changes every other month, new tires every six months and a new transmission can easily put you in the hole. And that doesn’t include $200 in gas every week if you’re doing it full time. COVID is just an added safety concern.”

Uber has taken steps to keep its fleet rolling.

It will pay the average of what’s earned over the past three months on a weekly basis while a driver is under a mandatory quarantine.

“I took a hit financially, but also there is the responsibility issue of making sure not to spread the virus,” Dionne said. “If someone had the virus and someone gave it to me, if it’s a busy time I could potentially infect a significant number of people in the area.

“Asking people to wear a mask to potentially not spread the virus if they have it and don’t know it is kind of exactly what we needed to have — responsibility.”