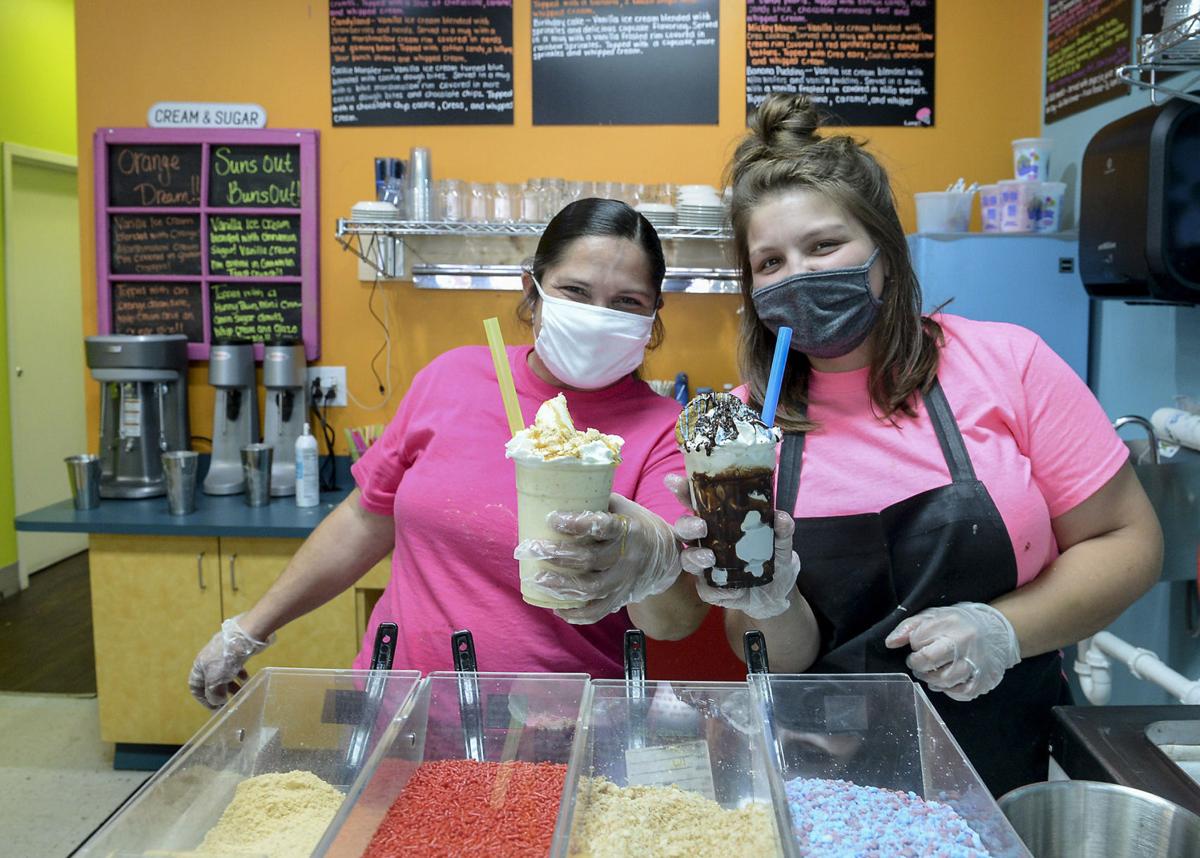 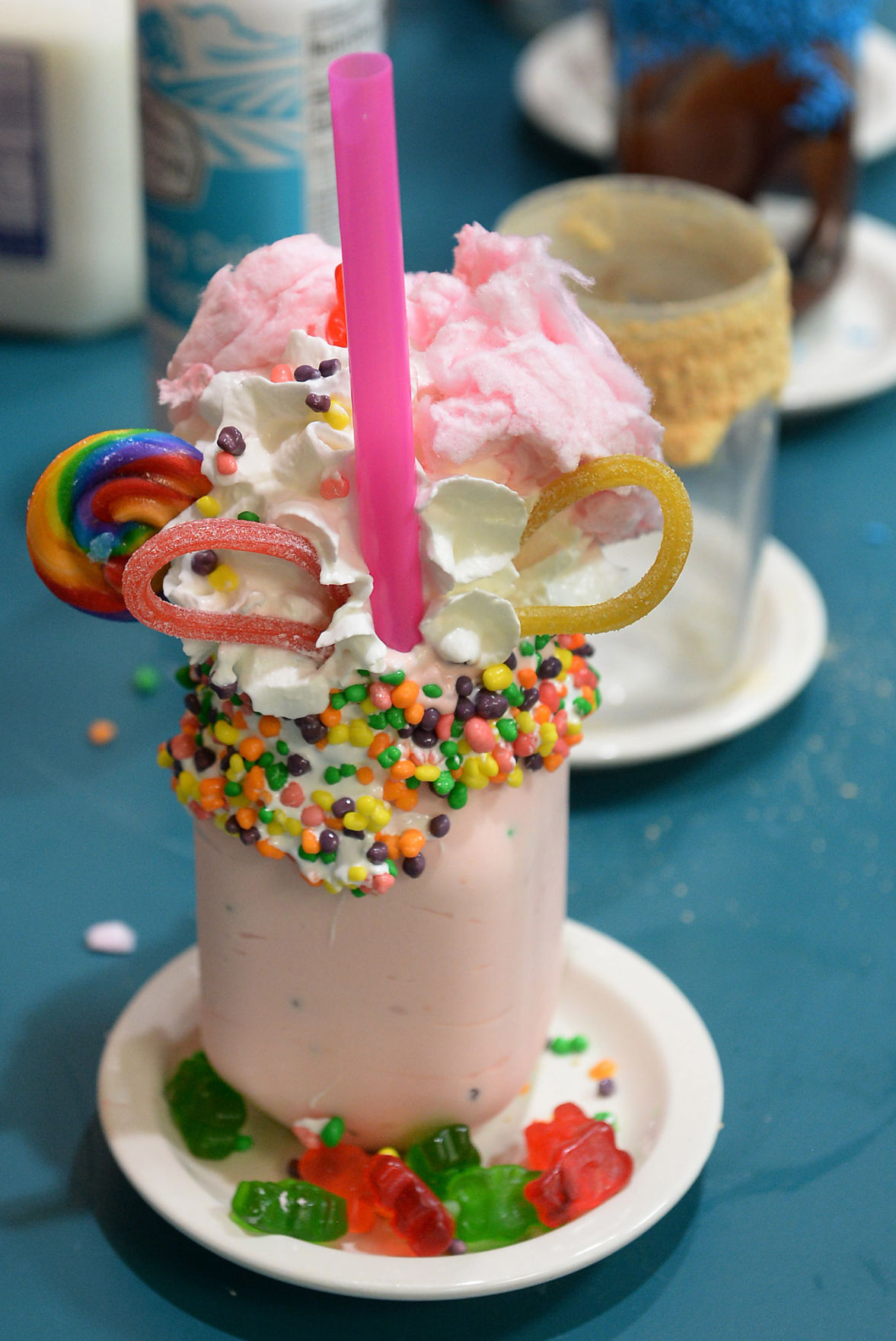 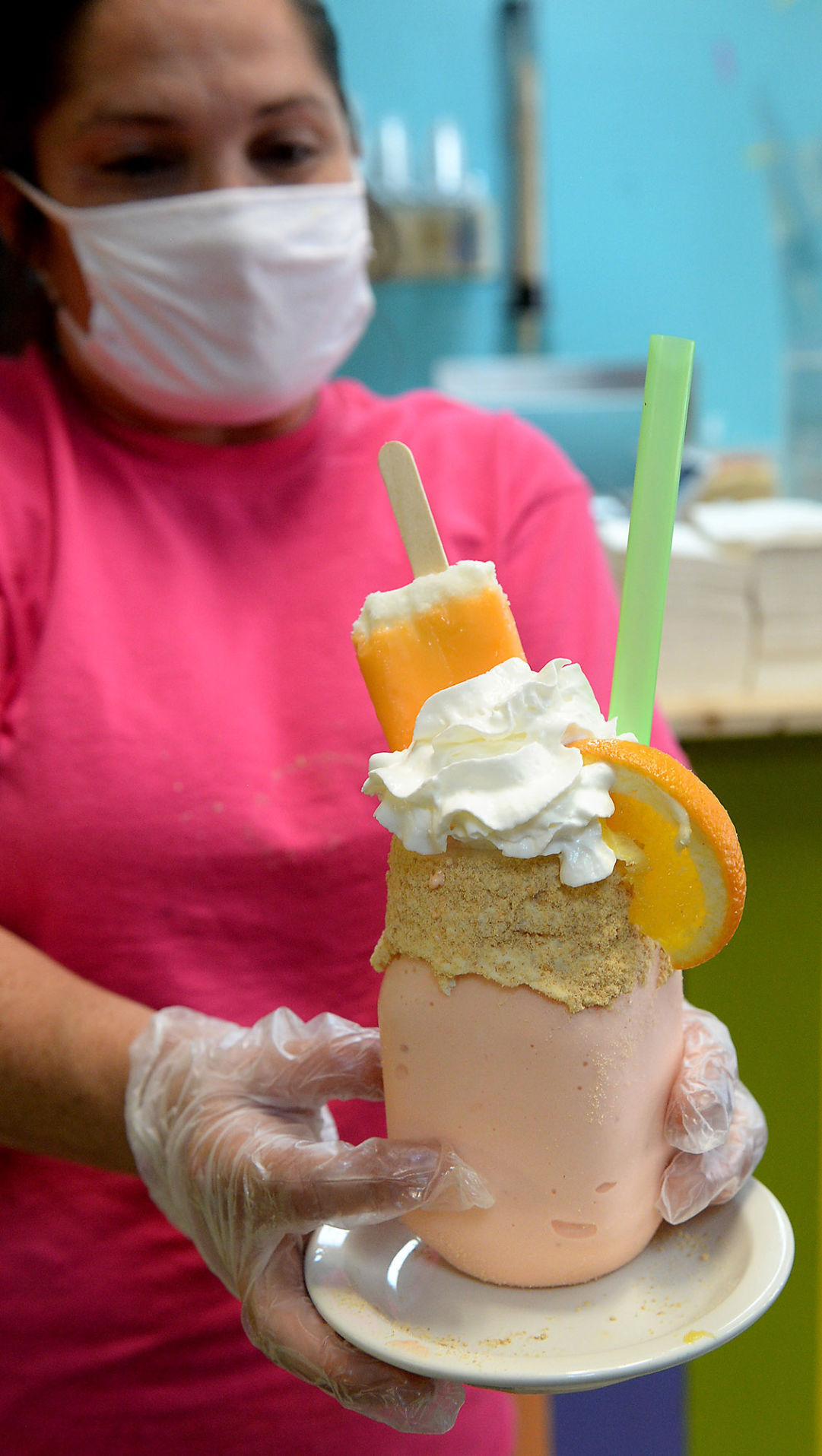 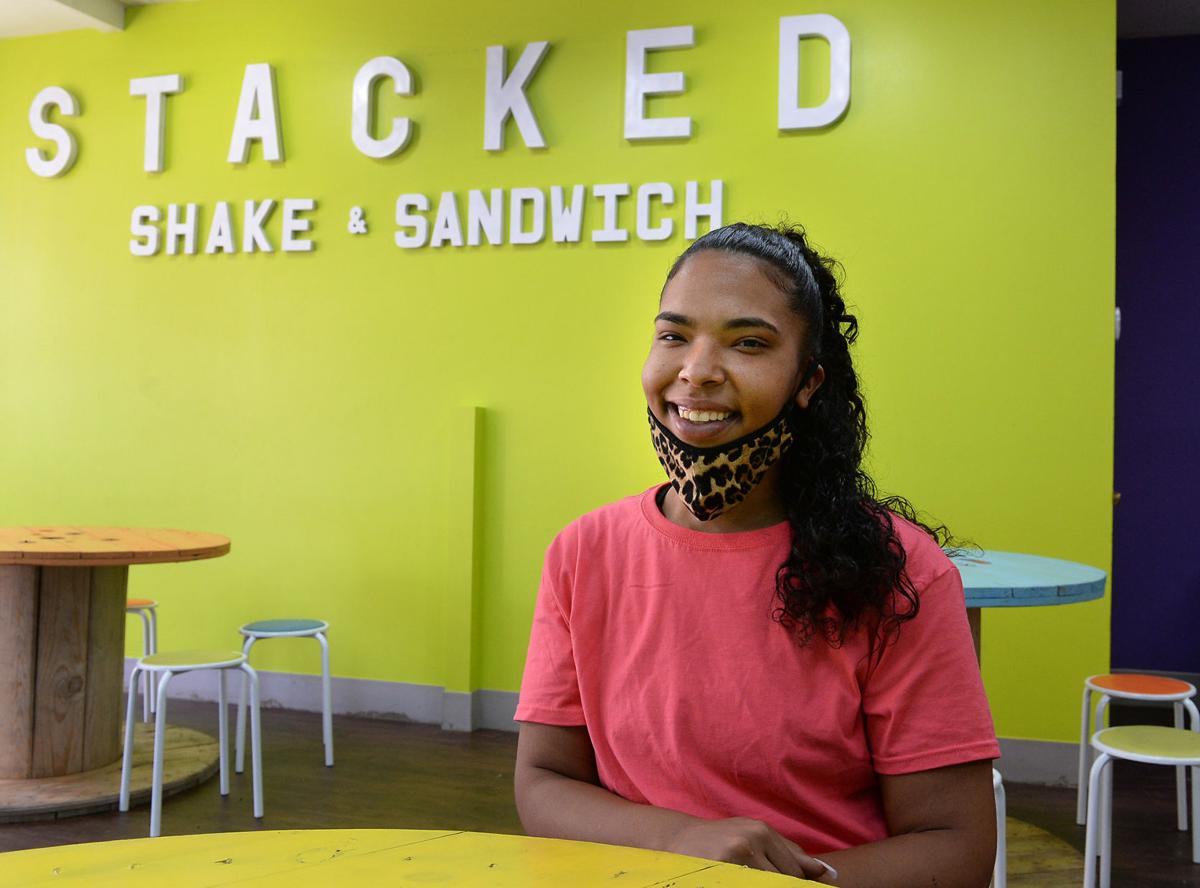 Asiah Williams, the 25-year-old co-owner of Stacked Shake & Sandwich shop in St. Albans, said during dark times, we could all use a little ice cream. 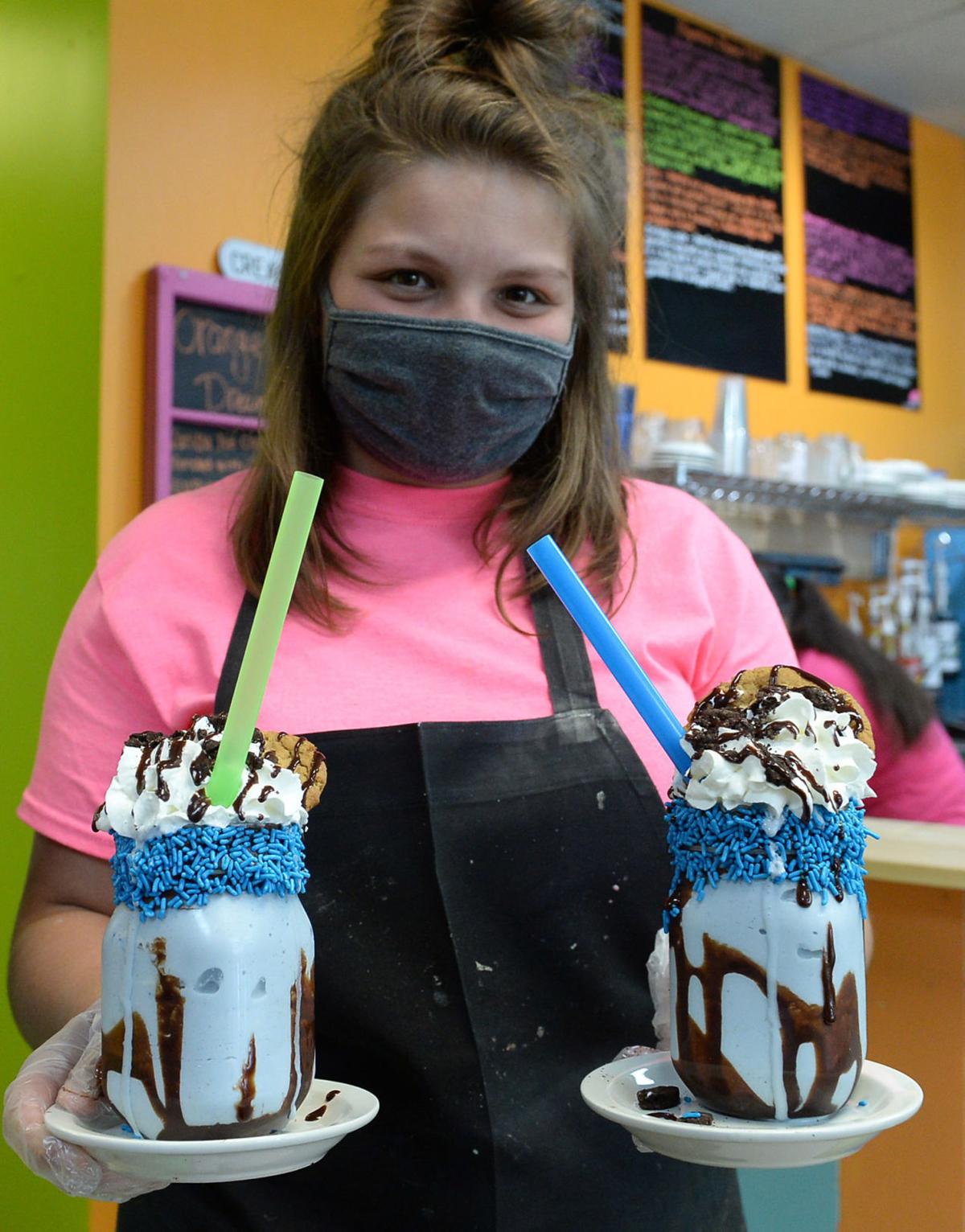 Asiah Williams, the 25-year-old co-owner of Stacked Shake & Sandwich shop in St. Albans, said during dark times, we could all use a little ice cream.

Served in a mason-jar-style mug and loaded with vanilla wafer crumbles, caramel, and a whole banana shoved through a crown of whipped cream, the banana pudding milkshake at Stacked Shake & Sandwich in St. Albans is completely ridiculous.

It’s too much ice cream, too much whipped cream and just too much sugar — the caloric equivalent of a brick thrown through the plate glass window of a sensible diet.

And that’s what owner Asiah Williams had in mind when she and her boyfriend, Ronald Cardwell, opened the ice cream and sandwich shop last month.

Their milkshakes are supposed to be too much.

Stacked Shake & Sandwich’s menu isn’t about healthy eating or portion control. It’s about having a treat and getting something you probably wouldn’t (or shouldn’t) have every day.

“I really just wanted to do something different,” Williams said. “And I thought I could bring something to Olde Main that would work with what’s already here.”

Stacked Shake & Sandwich joins Lil’ Bit of Heaven Cupcakes and Coal River Coffee Company on Olde Main Plaza in St. Albans, which is becoming a destination for fans of the sweet stuff.

Williams said she and the other businesses on Olde Main are complimentary. She gets coffee down the street at Coal River and her store carries Lil’ Bit of Heaven cupcakes.

Williams grew up dreaming about having her own restaurant.

Laughing behind her mask, she said, “I was the kid who had the Easy Bake Oven and made those little cakes for everybody. I set up a little restaurant in my back yard and got my parents to make the food.”

In high school, Williams took a server job at the International House of Pancakes in South Charleston.

She waited tables and eventually met her boyfriend, Cardwell, a cook. The two of them talked about opening their own place.

“We worked really hard and saved our money,” Williams said.

“It wasn’t a great location,” she said.

The place struggled for a few months, but it wasn’t working, so she closed it. Then she and Cardwell decided to try something in her hometown.

“I get to be the face of this,” Williams said. “But he’s been the muscle.”

Opening a milkshake and sandwich shop made sense to them.

“We didn’t have anything like that around here,” Williams said, shrugging.

With a little online research and a little travel, she and Cardwell came up with some ideas of what they might do. Then, they experimented.

“We looked at what other people did and put our own spin on it,” Williams said. “And we work with a lot of high school students here. They’re very creative.”

The shop has an established menu but it rotates in new flavors every couple of weeks.

For Animal Planet’s annual “Shark Week,” the shop did a shark-themed shake. This week, they have the “Orange Dream” shake, an homage to the summertime dreamsicles (and actually contains one) and the “Suns Out Buns Out,” which contains Cinnamon Toast Crunch breakfast cereal, donuts, a honey bun and a glaze drizzle.

Along with the ice cream, they sell sandwiches, including pulled pork, hot bologna and a French dip, but Williams said most people have been coming for the ice cream.

“We want to give people some choices,” she said. “And when I get a milkshake, it makes me hungry. I want a meal to go with it.”

Not everybody may feel the same, but they want to be a lunch spot, too.

Opening during a pandemic hasn’t been a problem for them, she said. People have been glad to see them and business has been steady.

Williams expected the demand for ice cream might drop during the colder months, but said they were already planning on rolling out a line of over-the-top hot chocolates.

“We always want to find new reasons to get people to come out,” she said.