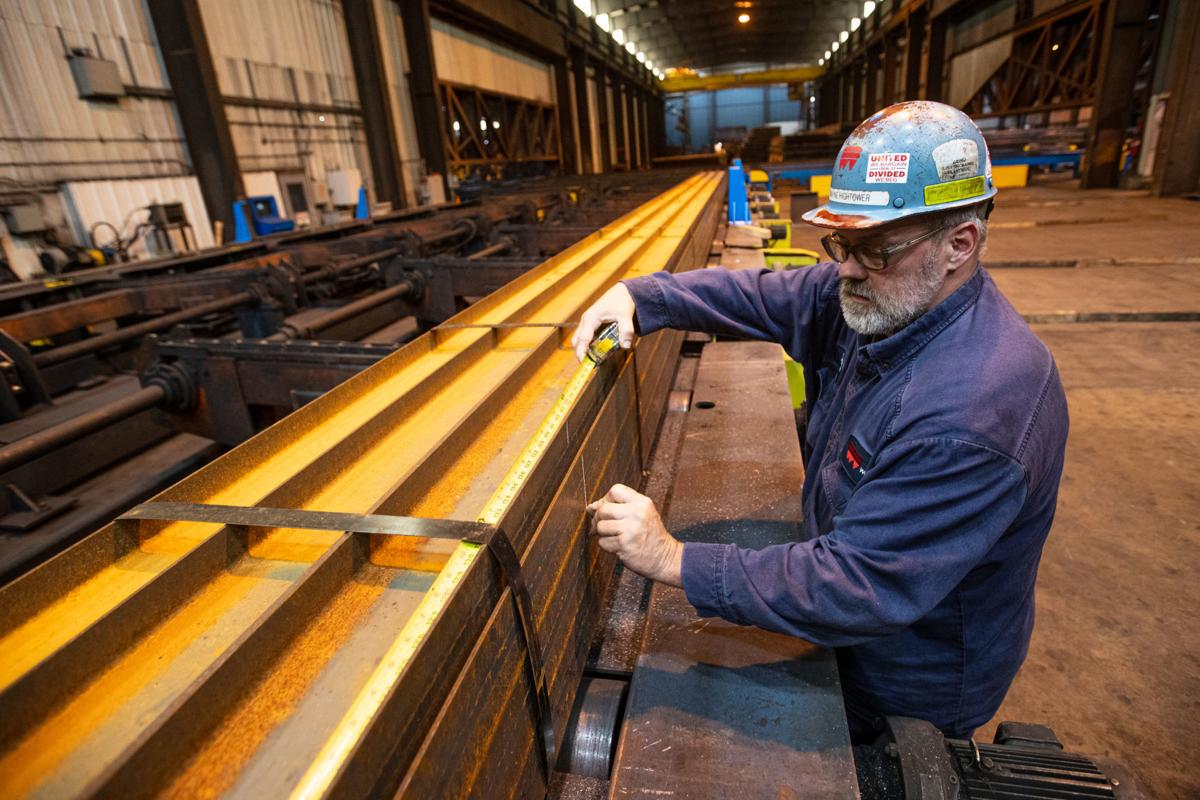 Production employee Dwayne Hightower marks and cuts solar beams to length in the Steel of West Virginia fabrication department on June 17, in Huntington. 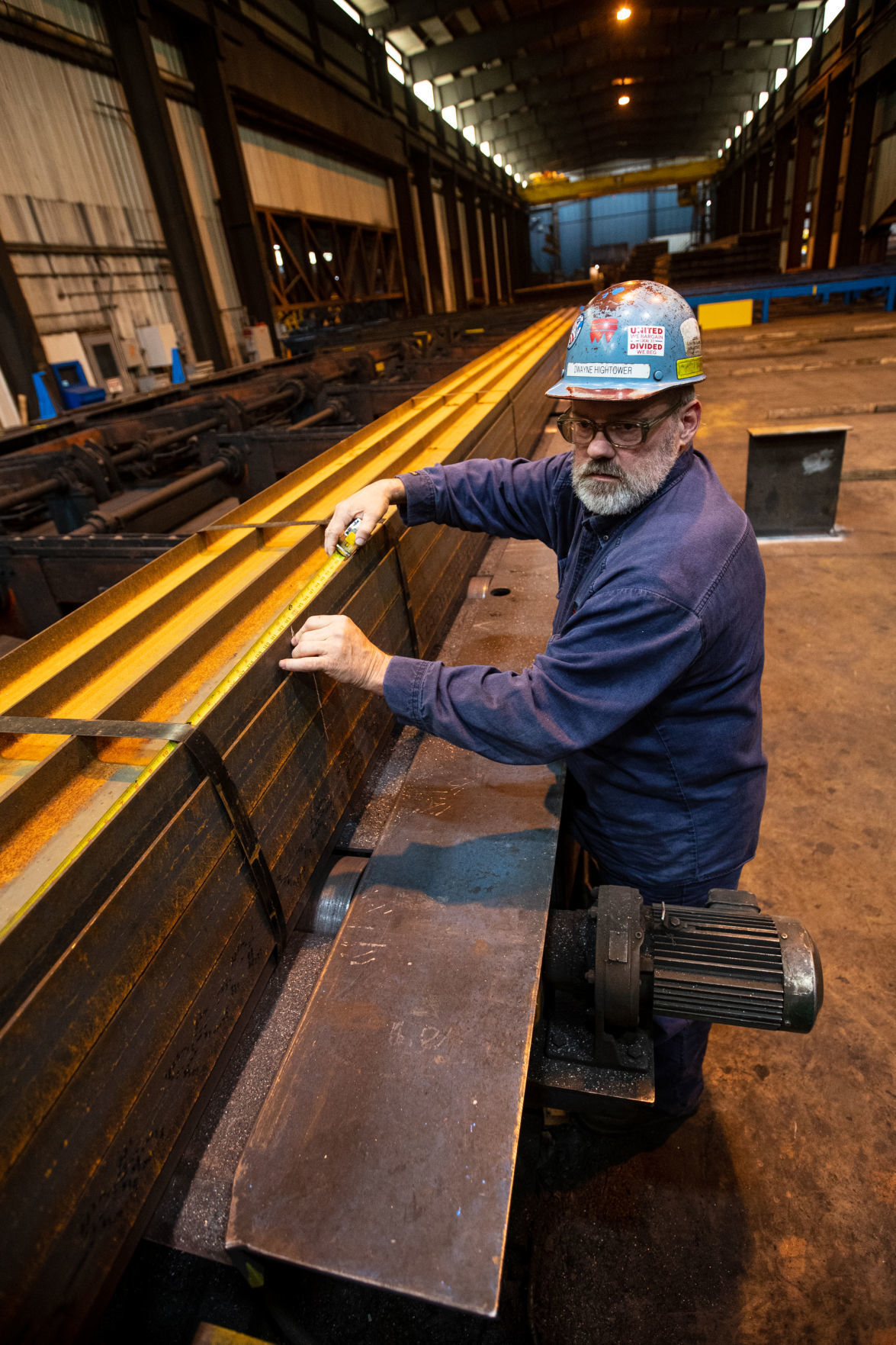 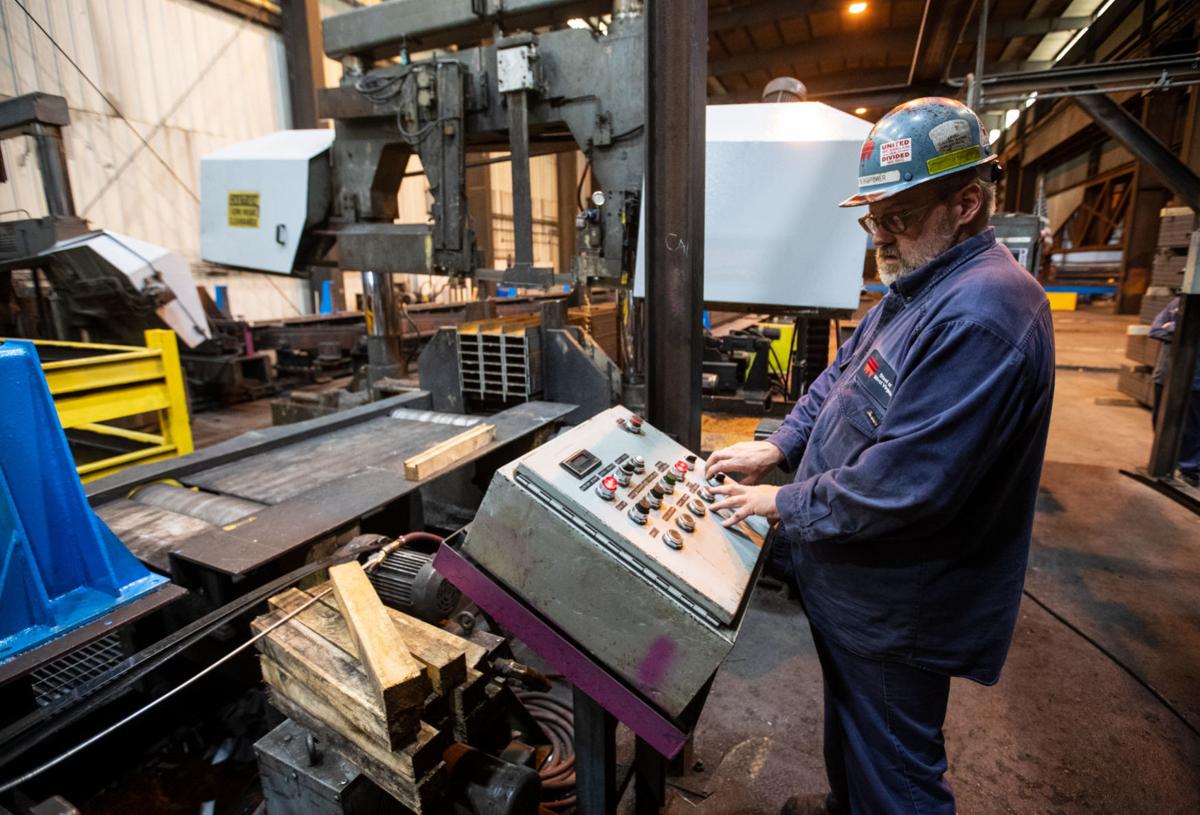 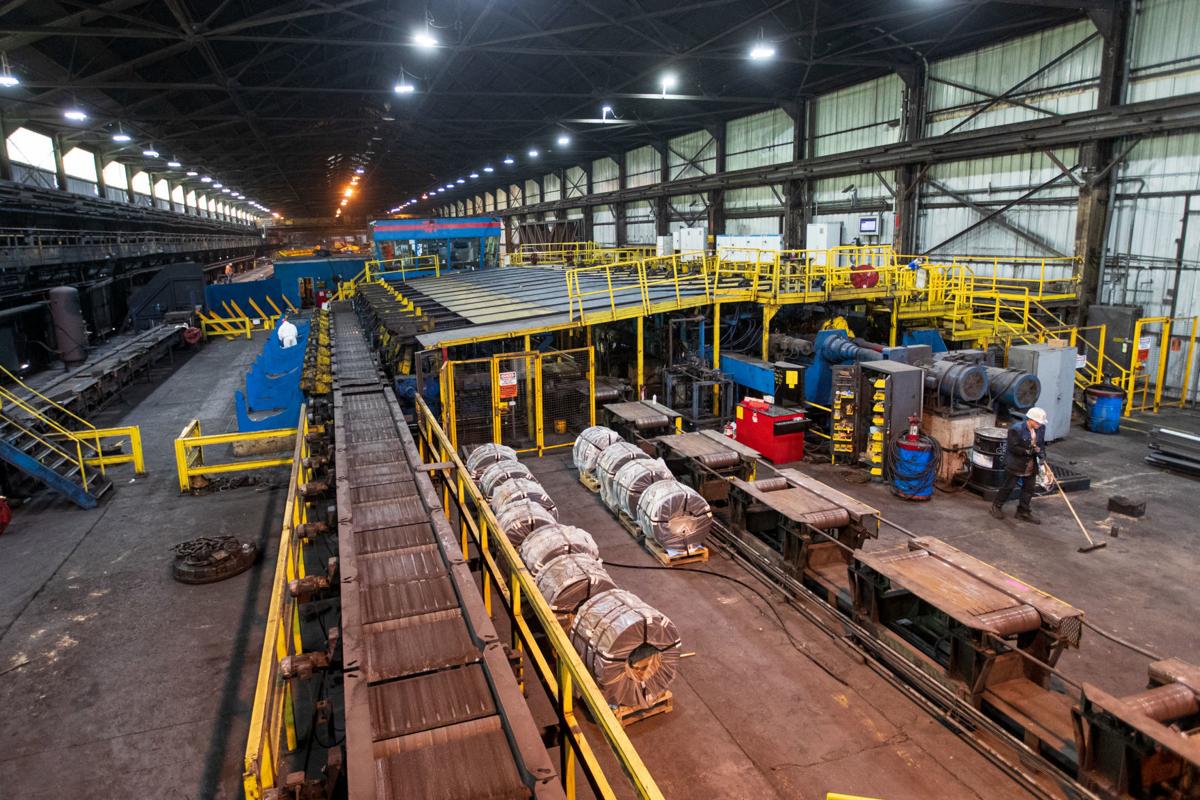 View looking over the finish end of No. 2 mill Danieli stacker at Steel of West Virginia on Thursday, June 17, 2021, in Huntington. 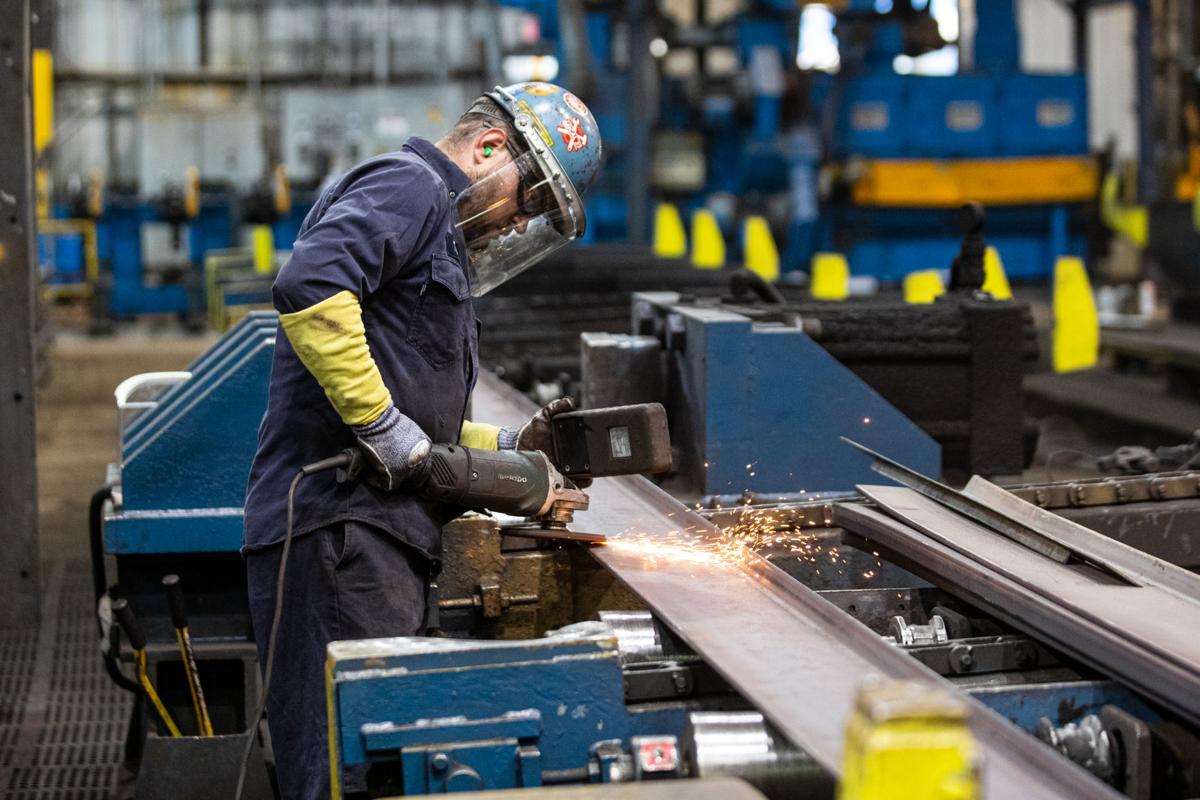 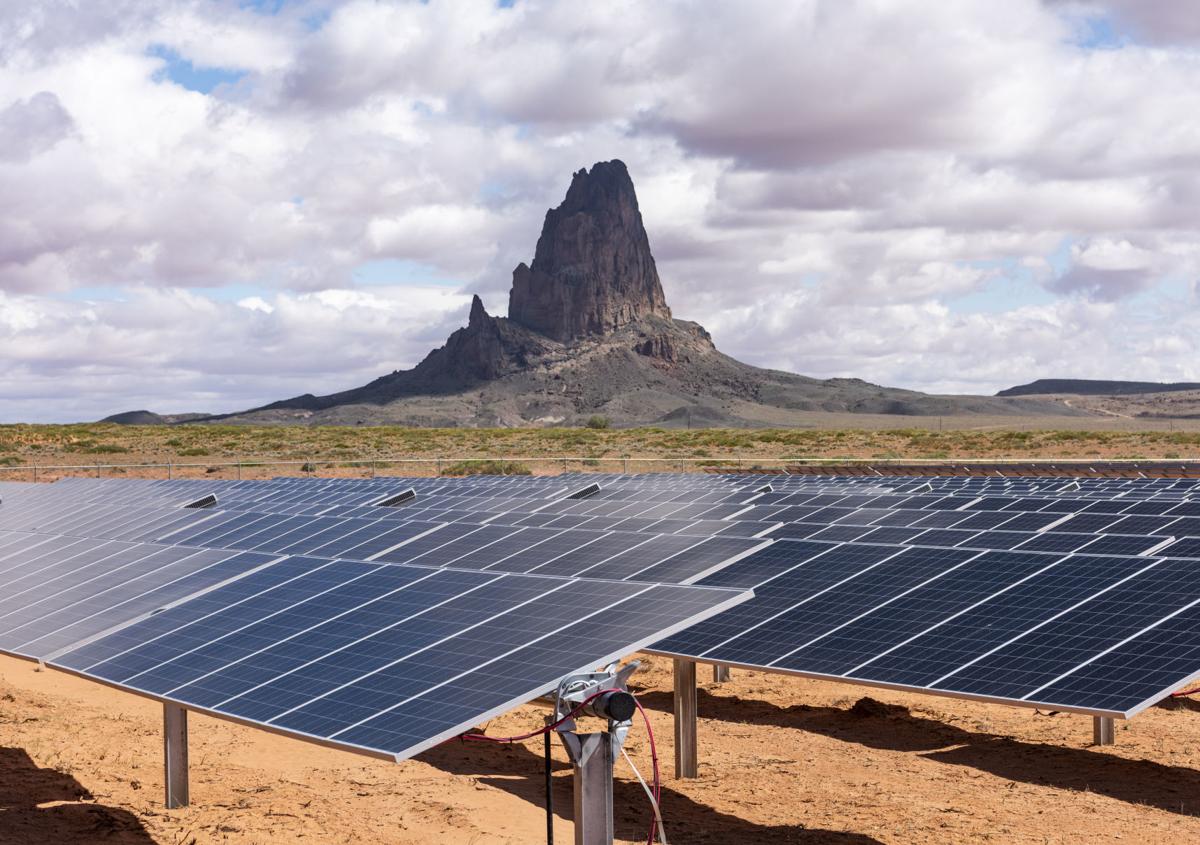 HUNTINGTON — Huntington’s Steel of West Virginia says it can succeed in a green economy.

More proof came when it was announced by U.S. Energy Secretary Jennifer Granholm and Sen. Joe Manchin, D-W.Va., the company would produce bulb flats to be used to construct a ship that would transport supplies along the Atlantic coast to build large wind turbines. The project is to be a collaborative effort among Steel of West Virginia, Dominion Energy and Orsted Offshore North America, officials said.

“We realized this vital ship building component was no longer produced in the United States,” he said.

The Jones Act (or Merchant Marine Act of 1920), which helped Steel of West Virginia supply bulb flats for the wind turbine ship, requires ships used for goods shipped between USA ports to be built, owned and operated by United States citizens with American content for national security reasons, Abbott said.

“The Jones Act has kept many American shipyards viable,” he said. “Without it, the USA would have lost much of the ability to produce ships to many of the same countries now threatening the steel industry.”

Many people don’t realize that Steel of West Virginia is actually a very large recycling plant, according to Abbott.

“We have been recycling steel in one form or fashion since 1907 and are now the largest recycler in the state of West Virginia,” he said. “Our hardworking men and women take scrap metal that would end up in landfills or backyards and recycle that steel in the electric arc furnace melting process, which is cleaner and more energy efficient than traditional blast furnace steelmaking. Blast furnace steelmaking creates new steel from basic elements in an operation that is not as clean or efficient as Steel of West Virginia’s recycling process.”

Steel of West Virginia takes scrap steel and melts it down to make new steel for use on guardrails, transportation equipment and other products.

“We use that recycled steel to manufacture a variety of products for many green industries, including support beams for solar panels,” Abbott explained. “Our team’s ingenuity created a new lightweight I-beam to serve this industry and replace costly imported supports over 10 years ago. Now our steel can be found in solar installations throughout this great country.”

Abbott says since September 2018, Steel Ventures has captured more than 20% of the country’s solar market by fabricating and coating support structures for solar panels.

“The new facility not only created new jobs in Kentucky but preserved Huntington jobs, as the steel coated in Wurtland is made in Huntington,” he said.

“And of course, our bulb flats provide strength and stability to vessels like the ship Dominion Energy is building to install windmills for new offshore wind energy development,” said Abbott. “Steel of West Virginia has several hundred employees manufacturing and fabricating products for the energy-efficient future. Economists tell us that each of those jobs produces another nine support jobs in the regional economy.”

Abbott says with a little congressional help, the company can continue to succeed in a green economy.

“If Congress wants to ensure that clean energy is actually clean, it must ensure that USA manufacturers and USA steel are key to the process. We are grateful for the leadership of Sen. [Joe] Manchin, Sen. [Shelley Moore] Capito, and Congresswoman [Carol] Miller in Washington to ensure that American jobs and American steel are prioritized as we rebuild our nation’s energy infrastructure.”

Abbott says there is healthy domestic competition in the United States for the energy and infrastructure markets.

“All American steel makers have to comply with U.S. environmental and labor laws, which protect the health and safety of the workforce and community, ensuring that the highest environmental standards are maintained,” he said.

“We live and work in this community, and we take the health and safety of our employees and the health and safety of the region very seriously. The same cannot be said for steel manufactured abroad. Few foreign competitors are held to the same high environmental standards as American manufacturers. Many steel plants across the globe from Europe to Asia are subsidized by their governments, which have promoted overcapacity, and sell steel at below-market costs to maintain employment for social stability reasons.”

Although steel overcapacity is not limited to China, China’s excess steelmaking capacity is a huge problem for the global steel industry, according to Abbott.

Abbott said in recent years, some of these foreign competitors have been caught manipulating their material designations to avoid paying tariffs on steel imports.

“Sen. Manchin, Sen. Capito, and Congresswoman Miller have been very supportive of our efforts to expose these manipulations and ensure a level playing field for American steel,” he said.

Abbott said Congress must ensure hard-working Americans are not left behind.

“Green energy tax credits and infrastructure projects should go to companies that employ American workers with worker safety standards installing American-made products including American steel,” he said. “Clean energy is only as clean as the components from which it is made. We have the opportunity to marry economic development and environmental stewardship, and West Virginians can lead the way.”