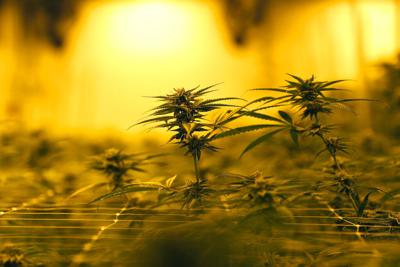 To navigate West Virginia’s medical marijuana card world, one can either show up at a sign-up event or fire up the old computer. The latter method is constantly available but requires some tech savvy, dependable broadband service and use of the proper server.

Not just anyone can qualify for a medical marijuana card. Conditions are stringent. Anxiety, depression and insomnia are nowhere to be found on the list. Parkinson’s disease, cancer, multiple sclerosis, post-traumatic stress disorder and amyotrophic lateral sclerosis, or ALS, are, to mention a few.

There is no way to proceed with the online application until one sees a physician. This doesn’t seem unreasonable. After all, a “medical” cannabis program means one can, upon a physician’s recommendation, derive medicinal benefit from the active ingredient in THC, tetrahydrocannabinol.

But the process can be burdensome. Only 59 physicians have taken the time to complete a special four-hour class devised by the state Office of Medical Cannabis to be registered. A link to a list of them on the agency website is easily overlooked. A sentence reads, “Identify a physician in your area from the registered physician list available here.” The word “here” is in green, but easy to miss.

It does work, revealing a table of physicians. The type is so small that upon legible enlargement it will not fit the width of a standard laptop. In many cases, the physician’s phone number is missing. A phone is likely the preferred method of communication among the state’s elderly, who are most likely to qualify for the list of serious conditions the program mandates.

The website is being redesigned, but “underlining or emphasizing text can be a stylistic choice rather than an automatic indication of a hyperlink,” Department of Health and Human Resources spokeswoman Allison Adler said by email, responding to a list of questions. The Office of Medical Cannabis is under the purview of the Department of Health and Human Resources, or DHHR.

“There are concerns all over the place,” said Rusty Williams, a patient advocate on the medical cannabis office advisory board. He said he resisted addictive opioids while he undergoing chemotherapy for testicular cancer. He chose weed. “The lack of access is the number one biggest issue. The website is hard to navigate. Many of these folks don’t have internet access.”

A 73-year-old man from Alum Creek and an elderly woman called the Gazette-Mail recently to explain the bewilderment they experienced trying to obtain a card. The Alum Creek man suggested throwing all the computers into Lake Michigan. He said he suffers from Parkinson’s and was mystified on to proceed to use the cannabis site.

Assuming he got help and procured a card, the man would have to travel to Morgantown or Weston to use it. Four years and seven months after the state’s medical cannabis act was signed into law, those localities are the only two homes for dispensaries. Trulieve opened those outlets last month.

Patient count is where it the problems begin.

Adler reports that as of Monday, 3,489 patients could walk into one of the two dispensaries and come out with product. Most growers and processors interviewed over the past month, including Spencer’s Dave Heeter, have serious doubts this number is sufficient.

The cannabis office originally awarded 10 growing and processing licenses each and 100 dispensary licenses but, with such a low patient count, there is no impetus to make a product with no market.

“Hell no,” Heeter said, when asked if approximately 3,500 patients would be enough to sustain 10 growers. “It might be enough to support one grower. It’s a drop in the bucket to what we need. It’s no wonder people are dragging their feet getting started. Patient count is absolutely key to success with this program.”

Heeter owns TariffLabs, with licenses to grow, dispense and process. It is the only West Virginia majority-owned provider with permission to do all three.

Adler said patient applications have increased 150% over the past few weeks. She stressed the importance of in-person patient sign-up events, digital and conventional advertising and encouraging the industry to reach out to potential patients.

Heeter said he set a Dec. 1 target date for opening his growing operation in Jackson County but that timeline has been pushed back to January. Someone on his payroll goes around to various events, urging card applications, he said.

Another way to obtain a card is by a telehealth exam provided by one of five national doctor practices with links on the cannabis office website.

Wheeling osteopath Mathew Wood and South Charleston ophthalmologist Heather Skeens are among the telehealth exam providers, according to the site. Otherwise, state code “restricts the advertising and marketing of medical cannabis, which shall be consistent with the Federal rules and regulations governing prescription drug advertising and marketing.”

Kevin Waugh, 43, of Cross Lanes, will operate three medical dispensaries for Compiler Wellness. He said he went through Green Health Docs, one of the telehealth companies. Waugh’s doctor said his employer would not allow him to provide the recommendation.

Wood is licensed to provide cannabis “recommendations,” the preferred term at the cannabis office.

“How are patients supposed to know that it’s an even an option when doctors are told you can’t even advertise this?” he said. “You can’t tell people you support medical cannabis.”

“I believe in continuity of care,” he said. “Some people who I’ve referred for cannabis will come back and say, ‘Hey, it’s just not for me.’ And that’s OK. I tell them to stop.”

Some potential patients worry about their gun rights, Wood said. Weapons buyers must complete a Bureau of Alcohol, Tobacco and Firearms form that inquires about marijuana use, among other things.

Whose side are they on?Williams and Berry both are skeptical that the current cannabis office board wants medical cannabis to succeed. Morgantown osteopath James Berry has not been an ardent booster.

“They are much more likely to develop an addiction problem if they started using cannabis whether it was for medical purposes or recreational purposes,” Berry, director of West Virginia University Medicine’s Chestnut Ridge Center, said three years ago.

In a January 2019 West Virginia Press Association event, Berry said he did not believe medical cannabis had a role in combating the opioid crisis.

“You can see that there’s a high correlation between cannabis use and ongoing other addictions,” Berry said. “It completely mystifies me that someone would suggest marijuana is the answer to our opioid addiction crisis. My position is one of caution and exploration as we go forward with this.”

Berry did not return a Gazette-Mail request for comment.

Williams said Berry and others have exercised caution.

“Here we are,” Williams said. “In five months it will be a decade since [Gov.] Jim Justice signed medical cannabis into law and we have two dispensaries open so far. Mountaineers are always free but tell that to a medical cannabis patient who gets caught ... all because they tried to grow a plant. People think someone who needs pot is going to grow a few plants and suddenly turn into the next Scarface.”

The cannabis law would not have passed had advocates not been so persistent in pestering lawmakers, , Williams said.

“[Policy makers] did not want the program to work back then and they don’t want it to work now,” he said.

Asked about advisory board members holding anti-cannabis attitudes, Adler wrote that DHHR “values the work and diverse perspective provided by the Medical Cannabis Advisory Board but has no role in appointment of the board’s membership.”

The Bureau for Public Health appoints board members and operates under DHHR.

Williams advocates allowing doctors with a medical or osteopathic license to write marijuana recommendations, without the coursework. Such a change would require legislative approval and run entirely counter to the current program.

“I say just open it up,” he said. “You don’t make doctors jump through hoops to put people on suboxone or prescribe opioids. If a doctor has gone to medical school and can write you a prescription for opioids, why can’t he for medical cannabis?

“Instead of patients looking at that list, just go to your doctor and get that recommendation. If the Legislature would just look at that one change, you’d see patient numbers skyrocket.”

Wood said he fears the Legislature will implement policies that will hurt, not help, the program. He says caps on THC content are ill-advised, because some epilepsy patients require high amounts to stop seizures. Reciprocal agreements with other states would be another step in the right direction, he said. That could mean a valid marijuana card in West Virginia is viable in Pennsylvania or Ohio.

“In September, one of the board members brought up the possibility of a reciprocal agreement,” Wood said. “All you heard was crickets. If we’re saying cannabis is a medicine, which is what it is, why can’t they get their medicine in other states? I’m not saying medical cannabis is a wonder drug. I’m saying patients in West Virginia need it as an option and they need reciprocation.”

Wood said he prescribes many medicines that have negative side effects, such as cholesterol and high blood pressure.

“Cannabis is not in a league of its own,” he said. “It’s not the devil’s lettuce. Look at narcotics.”

Wood said one of his simple litmus tests is to talk to a policeman and ask how many times he has responded to a case solely related to cannabis use.

“Every time, they will hold up a goose egg. Zero times. But they say, ‘Every day, I get multiple calls related to alcohol.’”

Physicians caution against dosing cannabis too often or using a strain that either is too powerful or has properties inconsistent with the treatment goal.

“Doctors have nothing to do with dosage or strain,” Wood said. “That happens in the dispensary. They’re educated on the product. They know what’s best for you. It’s up to the patients to decide how they want to dose.”

Not only is the patient count low, but applications are being approved slowly. Officials at the cannabis office said the agency is approving about 30 a day, which calculates to 7,680 a year, if it approved an application on every day of the year, with no weekends or holidays.

Heeter said 40,000 is a reasonable goal, considering 10 companies have licenses to grow.

It would take six or seven years, possibly, to generate those kinds of numbers.

Trulieve is the world’s largest cannabis company after acquiring another mammoth, Harvest Health and Recreation Inc. for $2 billion.

You can help solve medicine’s “one-size-fits-all” problem. Here’s how.