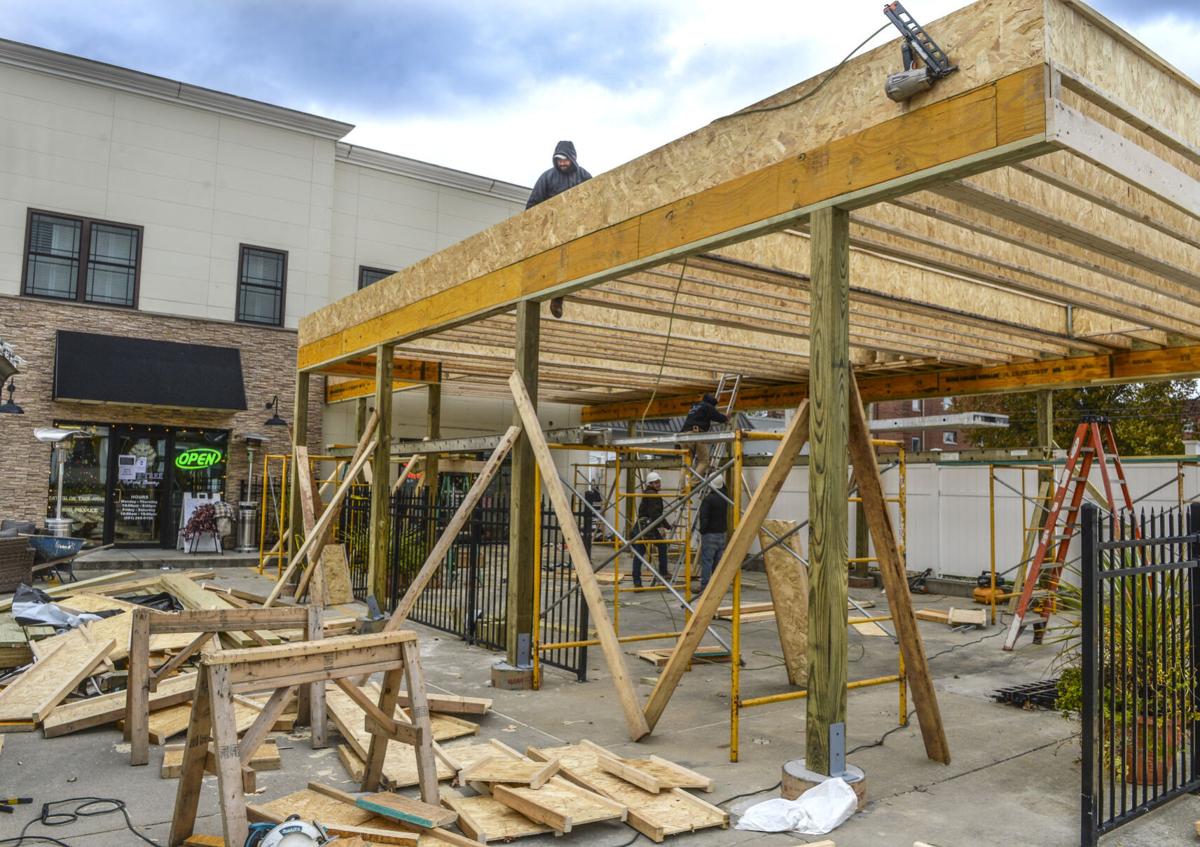 Olive Tree Cafe and Catering, in South Charleston, is expanding its outdoor dining area to include a covered and heated space to seat about 60 people during the winter months. 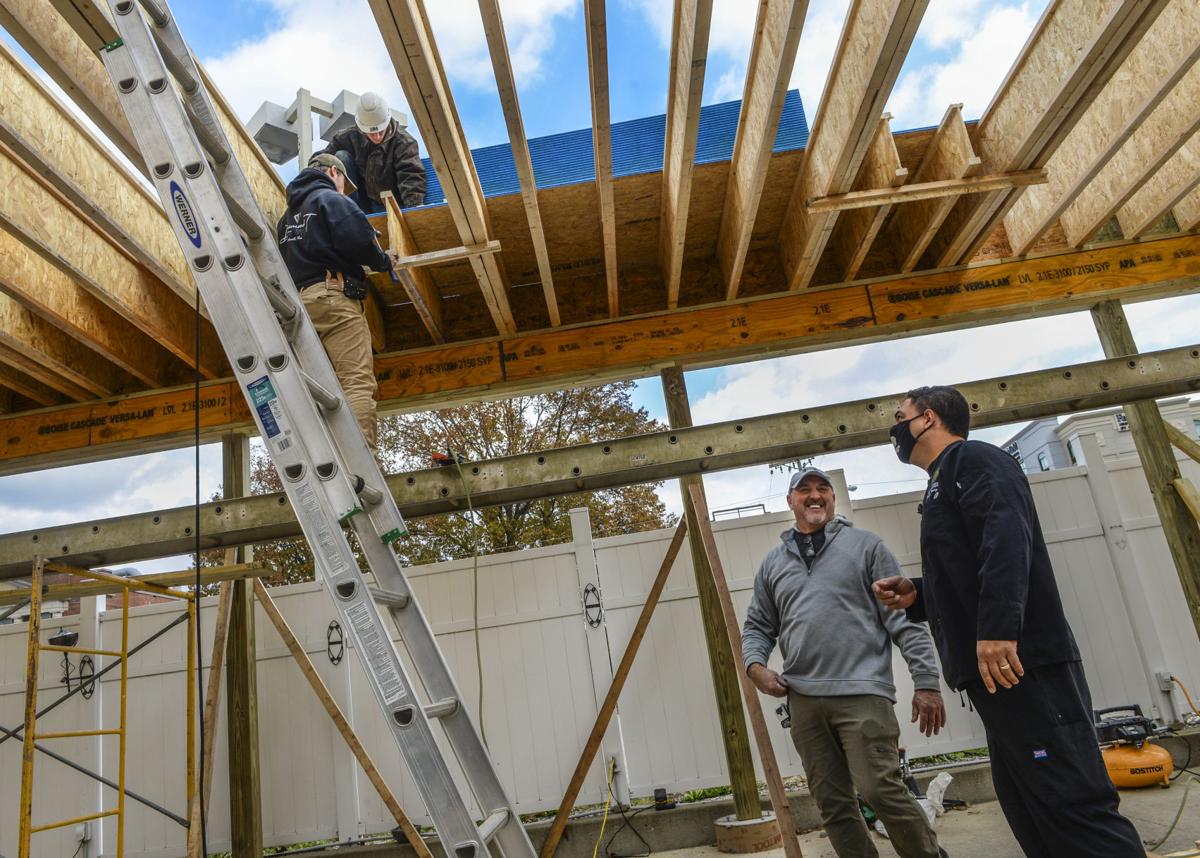 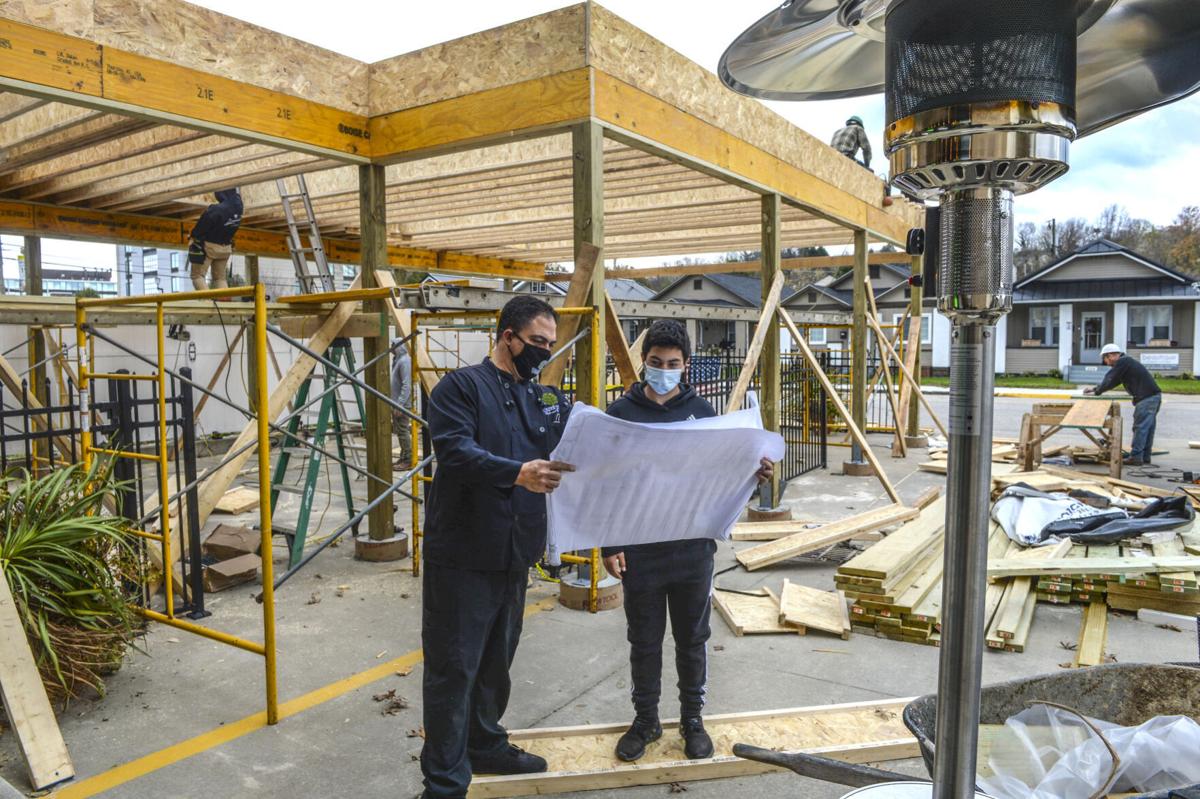 Olive Tree Cafe and Catering, in South Charleston, is expanding its outdoor dining area to include a covered and heated space to seat about 60 people during the winter months.

Tables have been shuffled, a couple of barriers were removed and a roof is under construction. It’s a significant facelift for a business that’s been open for more than five years, but sometimes you’ve got to do what you’ve got to do.

At least that’s the thinking of Michael Jarrouj, the owner of Olive Tree Cafe and Catering, in South Charleston. He’s not only tweaking his original business model — a menu that’s a mix of Mediterranean food, along with some traditional deli offerings — but also altering its basic infrastructure. What was originally tabbed to be a primarily dine-in business has shifted drastically to serve plenty of take-out customers, as well as patrons opting to eat outside on his modest patio.

That adjustment helped Jarrouj weather the pandemic-related shutdown earlier this year while some businesses were shuttered for months.

The outdoor part of that equation is normally seasonal, though. As winter sets in and temperatures drop, so too does the revenue generated from those outdoor patrons.

This year has been anything but normal, though.

That’s why Jarrouj has hammers swinging a week before Thanksgiving. The final result will be a heated and covered patio area that’s been expanded by about 25%.

The expansion isn’t to shoehorn more customers into the area in front of his restaurant — it will seat about 60 people — it’s primarily to keep the ones who already come, while providing ample room to social distance. If a few new customers add the Olive Tree to their regular rotations, Jarrouj said, then that’s just a further return on his investment.

“One thing that’s constant is you have to stay fluid and keep going, no matter what life throws at you,” Jarrouj said. “It’s kind of a risk and a big undertaking. It got a lot bigger than I thought it would be when I started, but we’re trying to do it right. You have to hustle and keep going. The bills don’t stop coming, the kids don’t stop growing.”

Jarrouj is an optimist. Most business owners are searching for ways to adapt or evolve as the uncertainty of a winter blanketed with a pandemic looms, along with the possibility of another shutdown or tighter restrictions.

Attempting to crack the code is a gamble, although local trends indicate more people are willing to take that chance.

According to the city of Charleston, 16 restaurants opened between March 1 and Nov. 18 — twice the number of places that closed during that same span.

Some of the eateries have remained open because, like Jarrouj, they adjusted their businesses. The city also tried to assist downtown dining establishments with a few initiatives. One was bagging parking meters in front of establishments to serve as pick-up areas for businesses offering grab-and-go or carryout service.

“Since July, we’ve closed streets downtown to allow folks to enjoy outdoor dining at several local establishments,” Charleston Mayor Amy Shuler Goodwin said. “In May, we started allowing businesses to expand sidewalk dining past their storefronts. This was all done in an effort to help small businesses that were limited in the amount of indoor seating they could offer. During this time, many establishments have seen business increase and have been able to hire back staff that was initially laid off because of the pandemic.

“While outdoor dining has become more difficult because of falling temperatures and inclement weather, we continue to be committed to helping our businesses through this difficult time.”

Still, winter in the age of COVID-19 is an unexplored landscape filled with uncertainty.

Consider the case of the Bridge Road Bistro, which has been open since 2004 — more than enough time to streamline a working business model and establish a niche. Its owner, Sandy Call, said that, since March, the restaurant:

Along with those challenges has come the day-to-day monitoring of what used to be mundane concerns, such as shutting down coolers and minimizing hours of operation just to save money on utilities.

“We’ve learned that, at the drop of a dime, we can be told to close our doors to guests,” Call said. “The uncertainty and fear of our staff being exposed is confronting us daily.

“It’s just been one thing after another. But we’re determined to weather this storm and, hopefully, prevail.”

Gazette-Mail editorial: Time for Justice to further act on pandemic

Ben Fields: The underlying tension of a pandemic (Opinion)

Chief: Charleston police officer 'not going to pull through' after shooting