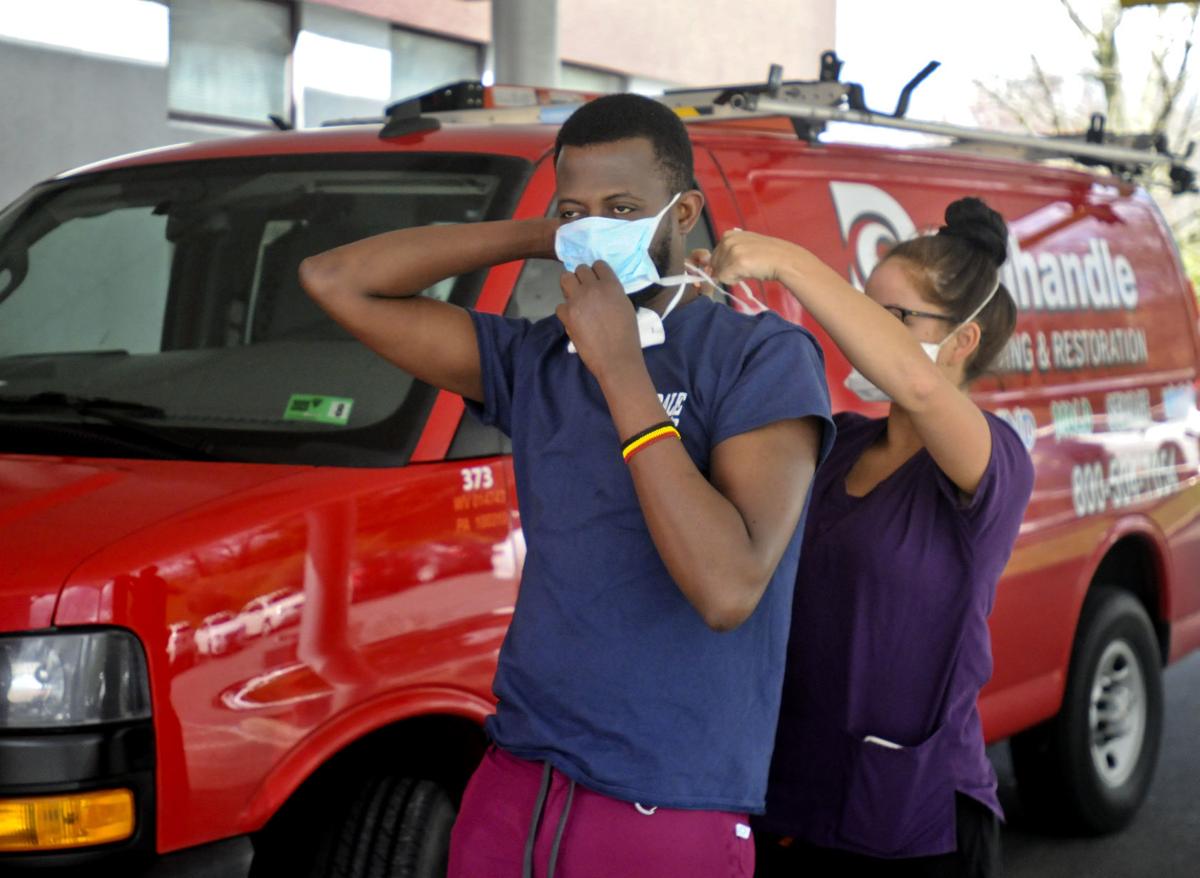 Morgan Schuerch ties Frank Kiiza’s face mask before clocking in for their shift Monday afternoon. Both are nursing aides at Sundale Nursing Home, in Morgantown. 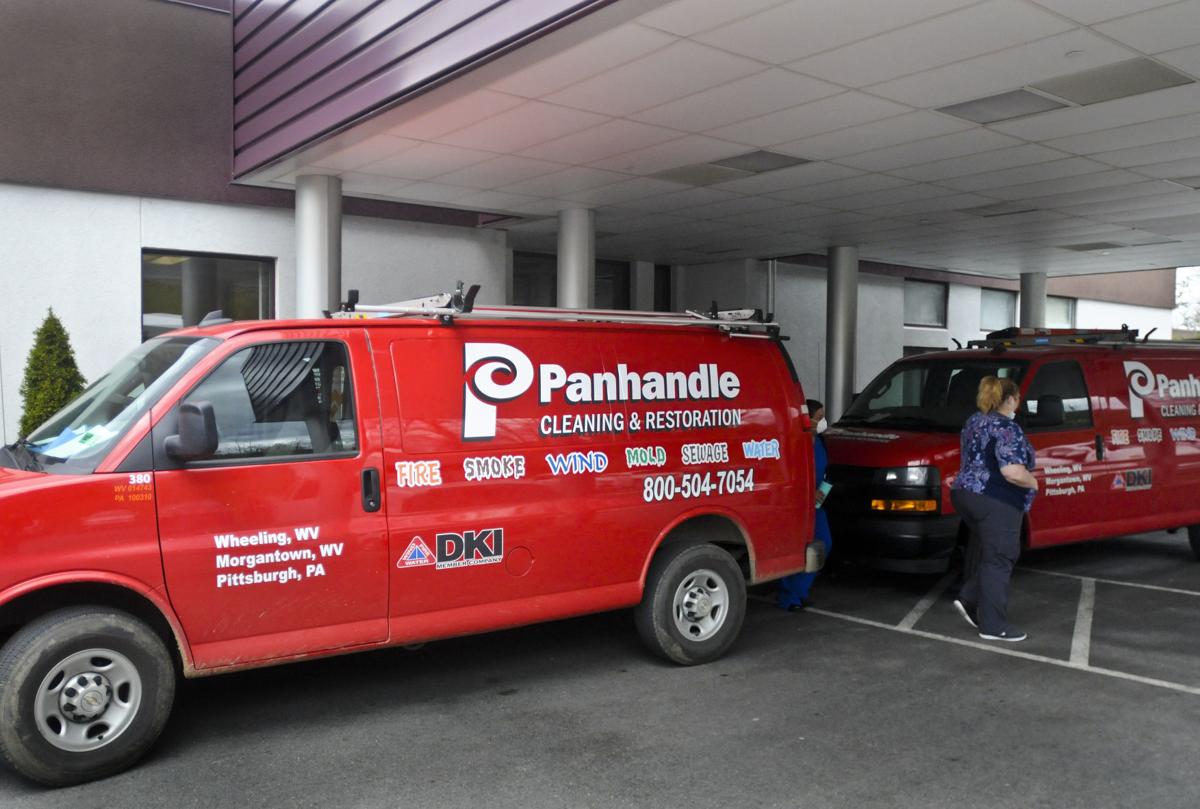 Panhandle Cleaning and Restoration has been inside Sundale throughout the coronavirus outbreak providing a deep clean of the facility. These two work trucks were posted outside the front door on Monday. 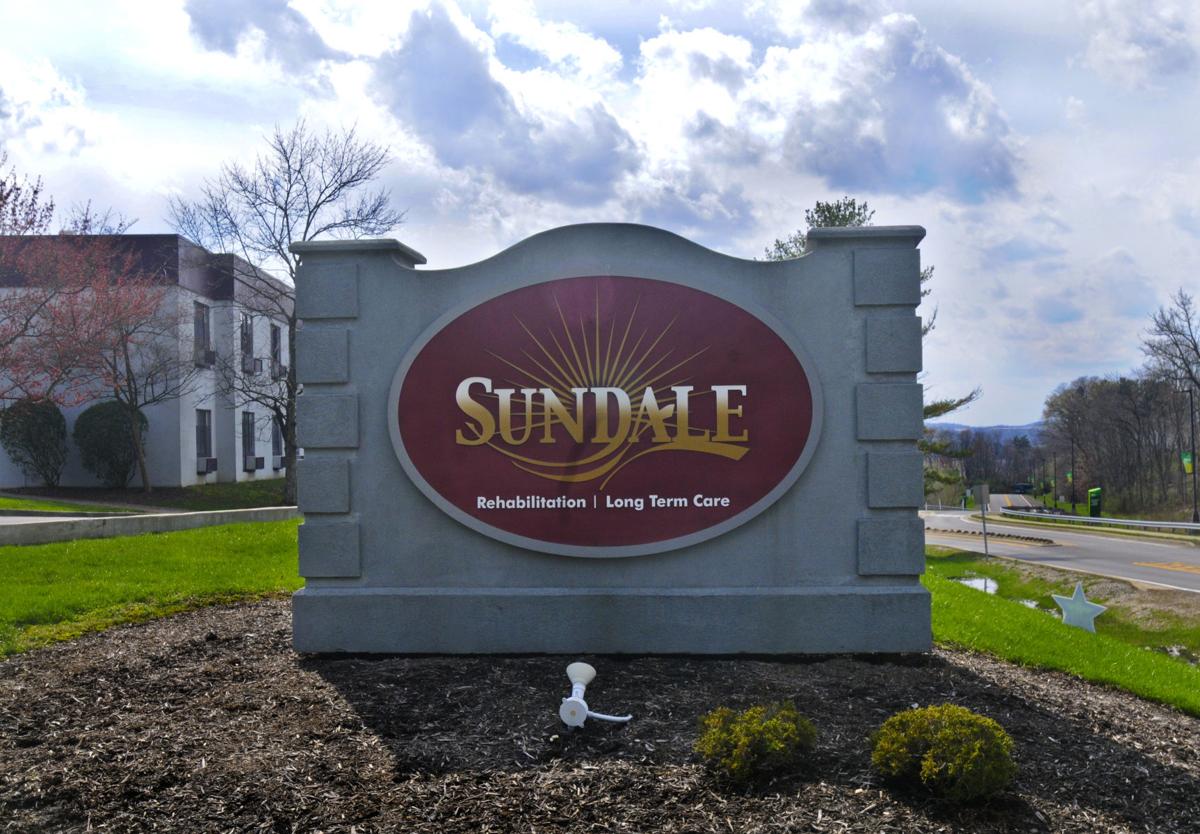 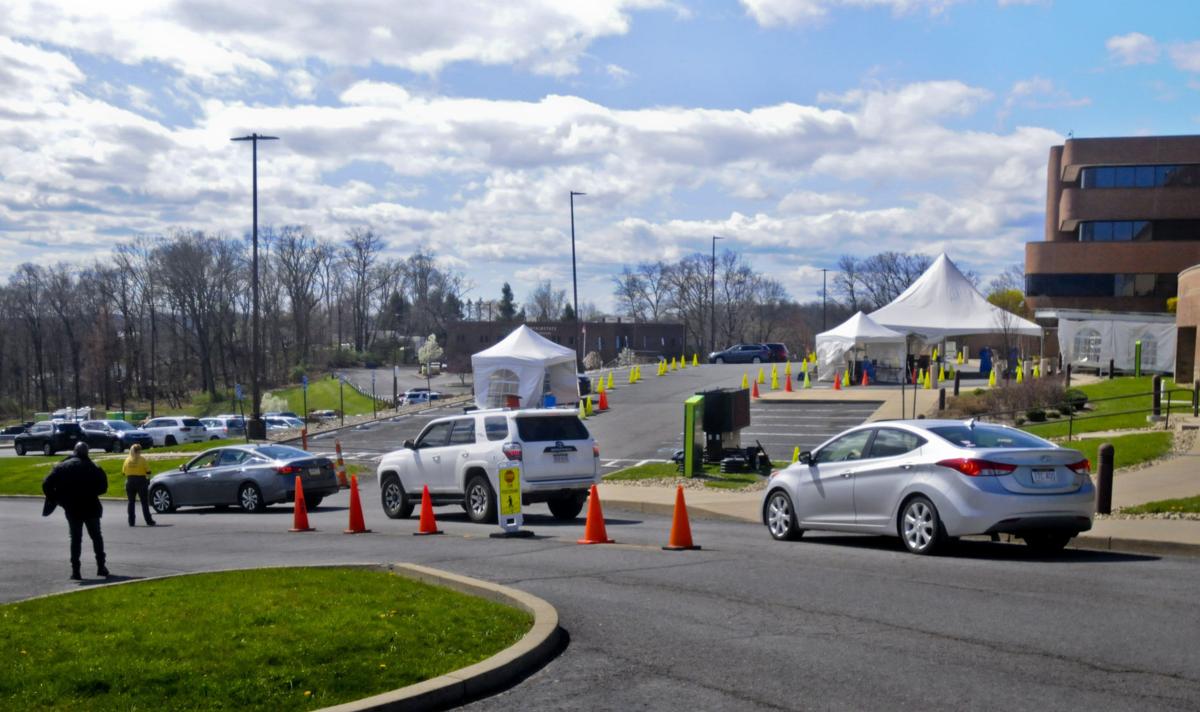 Mon Health Medical Center employees are directed out of the parking lot by security Monday afternoon. A drive-thru coronavirus testing clinic was set up in large white tents last week.

Morgan Schuerch ties Frank Kiiza’s face mask before clocking in for their shift Monday afternoon. Both are nursing aides at Sundale Nursing Home, in Morgantown.

Panhandle Cleaning and Restoration has been inside Sundale throughout the coronavirus outbreak providing a deep clean of the facility. These two work trucks were posted outside the front door on Monday.

Mon Health Medical Center employees are directed out of the parking lot by security Monday afternoon. A drive-thru coronavirus testing clinic was set up in large white tents last week.

Nurses and aides wearing masks were clocking out. Some headed to their cars carrying boxes from Pizza Al’s, a local staple. The next shift’s workers were clocking in; some helped tie each other’s masks before heading through the front door. Morgantown residents came, too, dropping off lasagna, sides and sweet tea.

Some staffers were working 16-hour rotations. Just eight days earlier, the first positive COVID-19 case was announced at the facility. Dr. Carl Shrader, Sundale’s medical director, said those eight days — during which the total number of cases ballooned to 29 — were spent screening patients, isolating the infected and coordinating efforts with local hospitals.

Nursing homes, assisted-living facilities and retirement communities across the country have feared outbreaks within their walls. A Seattle-area nursing home where 35 deaths are linked to the virus is a model for the worst of those fears.

The initial case at Sundale was West Virginia’s first community-spread infection — meaning the source of the infection was unknown. This spawned new problems and deeper anxiety.

But the weekend came and went without new positive cases. Shrader said a few key decisions helped contain the initial outbreak. His advice for other homes? Demand testing, develop a plan and go from there.

One week to respond

Sundale’s first positive came early on a Sunday. The woman was a resident in her 70s. By Tuesday evening, all 98 residents and nearly 150 Sundale staffers had been tested, Shrader said. Any patient showing symptoms was isolated in a low-traffic area of the home.

By Wednesday, almost all of the results had returned, and residents who tested positive were isolated.

Teams spent Thursday and Friday building an isolation unit, Shrader said, while management and staffers devised a plan to run the home — a plan that included those 16-hour shifts.

During the week, 21 residents and eight staffers tested positive. As of Monday evening, just two residents were in local hospitals on ventilators, Shrader said. The remaining patients were recovering.

‘Testing across the board’

For Sundale, securing the tests was everything.

“The critical piece was in the first 48 hours. We had the entire building screened,” Shrader said. “It allowed us to isolate those people and maintain adequate staffing.”

The home had friends nearby. Mon Health Medical Center sits 200 yards up the hill from Sundale; J.W. Ruby Memorial Hospital and WVU Medicine are a two-minute ambulance ride away.

Shrader said the two local hospitals provided all the test kits to Sundale, while WVU Medicine and the state provided laboratory assistance to run samples. He credited the hospitals and the state for expediting the process.

Containment would have been nearly impossible without every resident and employee being tested, Shrader said.

At the time, Centers for Disease Control and Prevention guidelines for who could receive a test were limited to those who showed symptoms or had recently traveled out of state. Few at Sundale who tested positive showed symptoms, Shrader said.

“About half of the people that we have in the facility that are positive are still not symptomatic, and they never demonstrated symptoms. The eight staff that we have positive, the majority of them have never felt like they were sick,” he said. “If we went by [those guidelines], I think we would’ve really put the entire building at increased risk.”

Few nursing homes are conveniently sandwiched between two of the state’s top health care systems. But that shouldn’t keep other homes from ensuring everyone is tested, Shrader said.

“My advice to medical directors and other facilities would be to fight hard and lobby for testing across the board,” he said. “It is the only way you will identify all your positives in that snapshot in time.”

Sundale staffers were stunned by how quickly the health of some patients deteriorated.

After exhibiting symptoms during the first two days of infection, some patients began recovering and were doing “very well” on days three through six, Shrader said. But on the seventh, eighth and ninth days, some patients suffered severe and sudden declines.

“One of the patients that we have here ... she was positive, [but] there was no way of even knowing she was sick,” he said. “She was her normal self.”

“We weren’t sure she was going to survive, [but] we were able to support her and, today, she’s more or less back to her normal self,” Shrader said. “That’s how fast it hits people. It can go from nothing to very severe at that day-seven, eight window.”

Advice for other homes

For nursing homes, assisted-living facilities and retirement communities in West Virginia’s rural areas, Shrader recommends first reaching out to local hospitals where patients would be sent in an emergency.

Those hospitals should be apprised of the number of patients at a given facility and which of those consent to being put on a ventilator. County health departments should get those numbers, too, so officials can coordinate gathering sufficient stocks of tests, personal protection equipment and cleaning supplies.

Shrader said building connections early is crucial so “you don’t find yourself in the eye of the hurricane and wondering, ‘Where do I go from here with this?’ ”

“The scariest part of it is facing something that you’ve never had to deal with before,” he added. “There’s no guidelines you can point to that would tell us how to manage this.”

Marsh said nursing homes must continually emphasize the basics to staff — hand washing and refraining from touching their faces.

“A big part of what we need to do is retrain our workforce and start to think differently about infection control,” Marsh said. “If the people working there are really disciplined enough to take care of their hands and not touch their face, the virus can’t spread. I think the key is it’s really about changing our behavior, as well.”