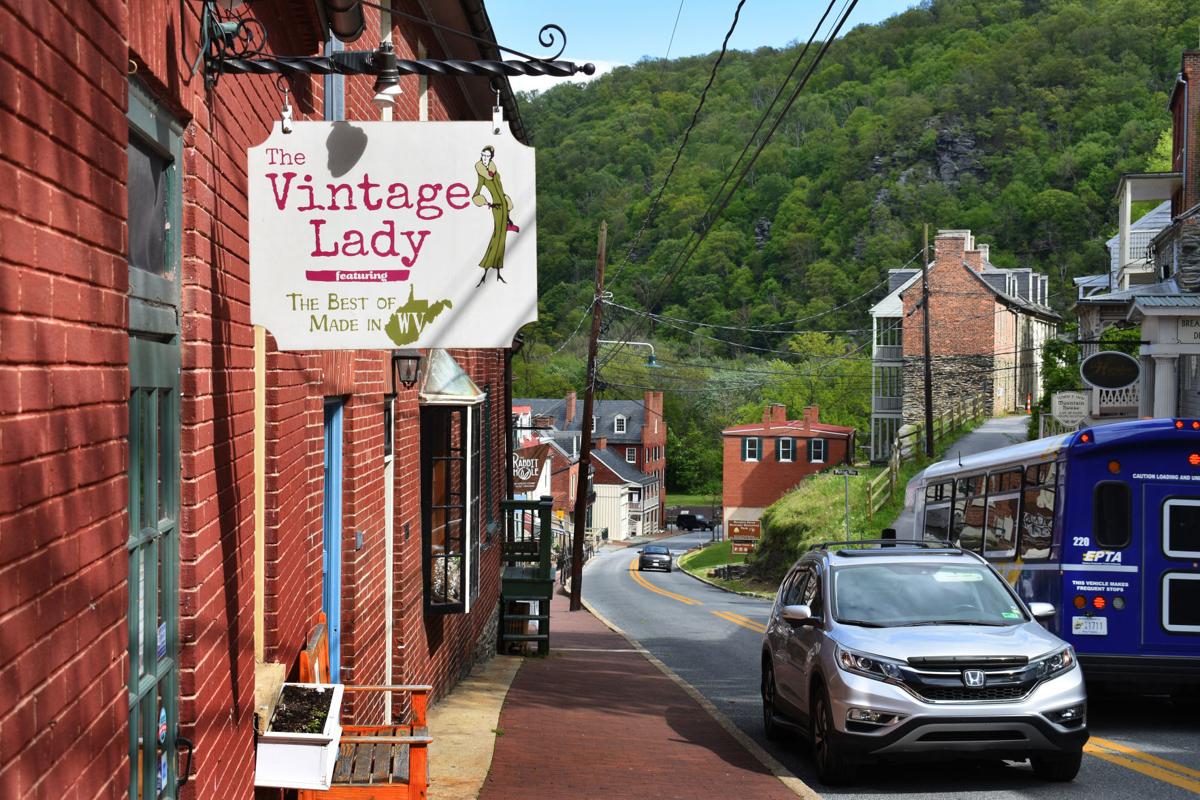 A sign hangs out front of The Vintage Lady in Harpers Ferry. The small business — which sells West Virginia-made jewelry, beer, wine and other collectibles assembled in the Mountain State — attracts tourists from across the world. 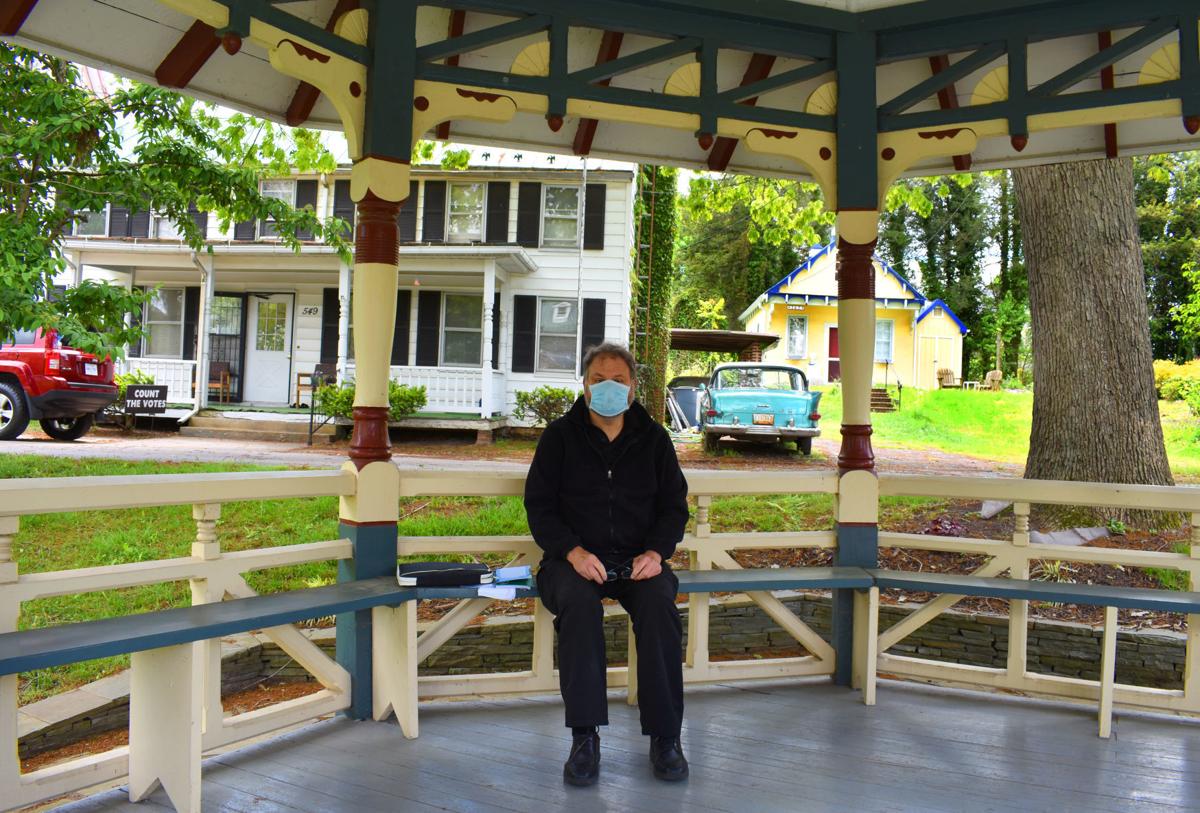 Sen. John Unger II, D-Berkeley, sits in a gazebo nearby United Methodist Church at Camp Hill, in Harpers Ferry, where he is head pastor. 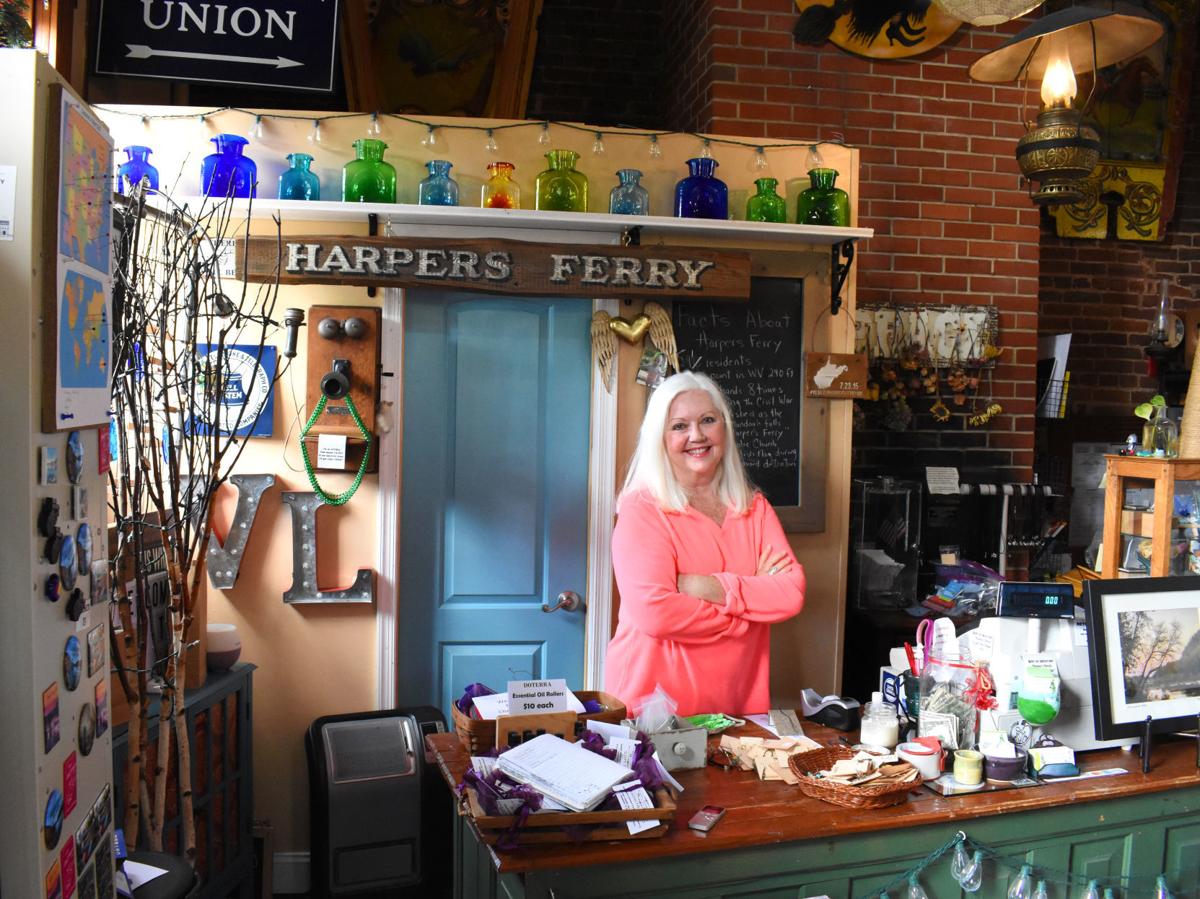 Cindy Dunn, owner The Vintage Lady in lower town Harpers Ferry, is one of many local business owners weighing the risks of reopening. The shop attracts tourists from across the world, which is a drawback during a pandemic. 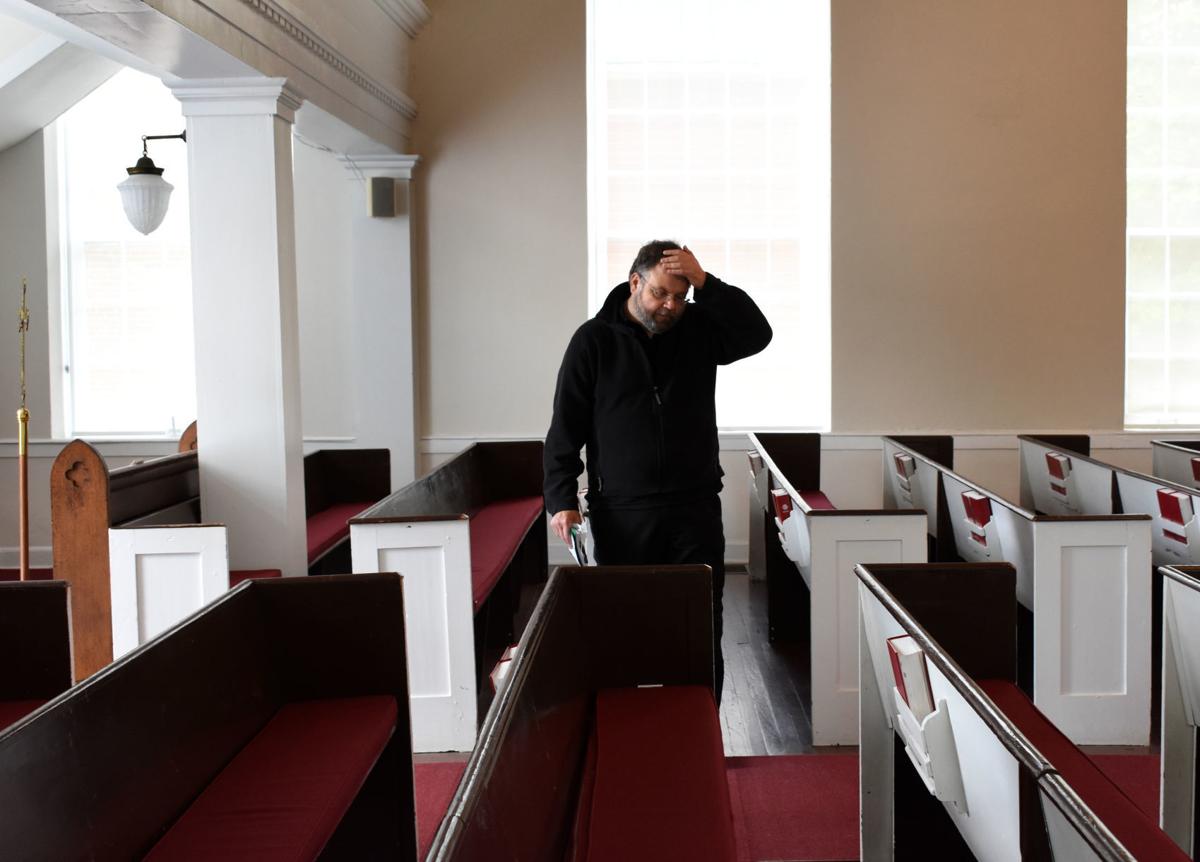 Unger wants to believe God has spared the Mountain State, but he wants the data to prove it. 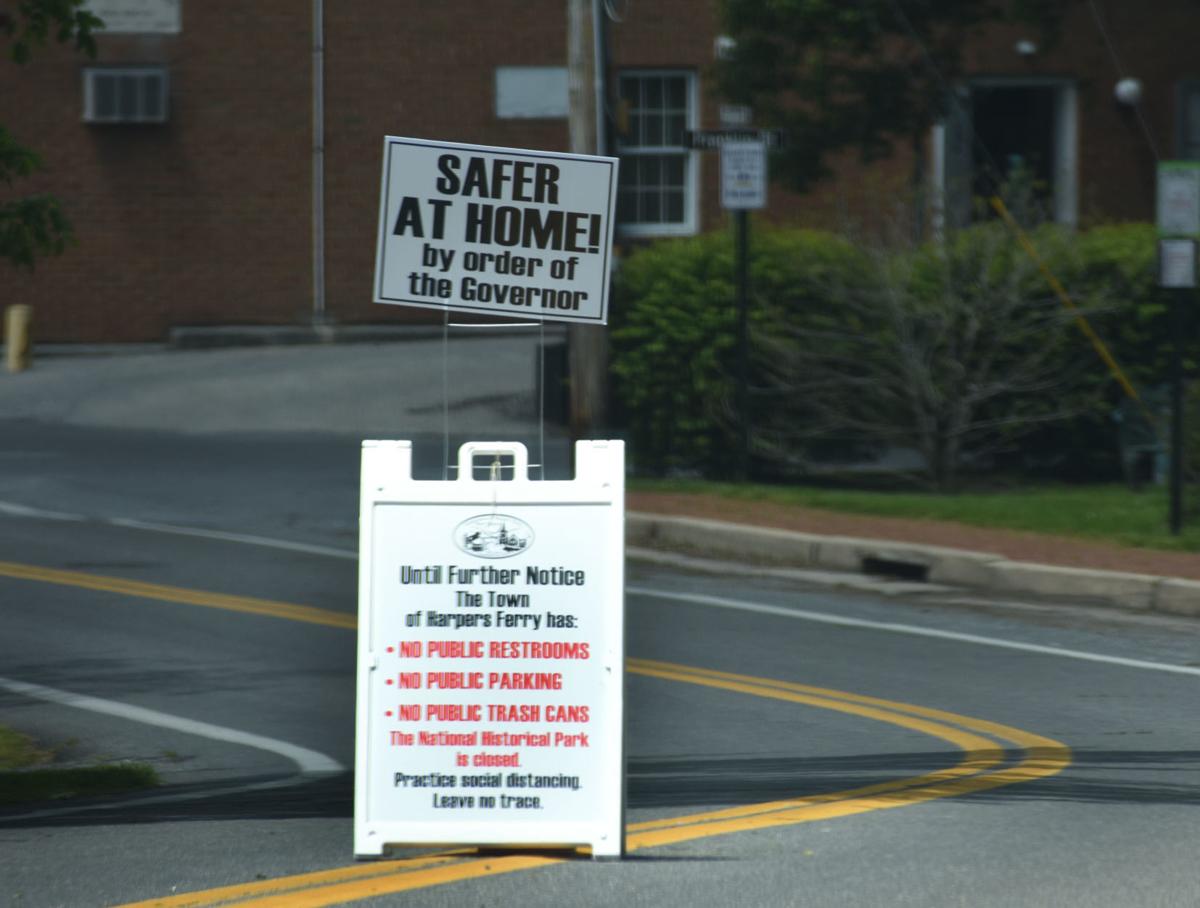 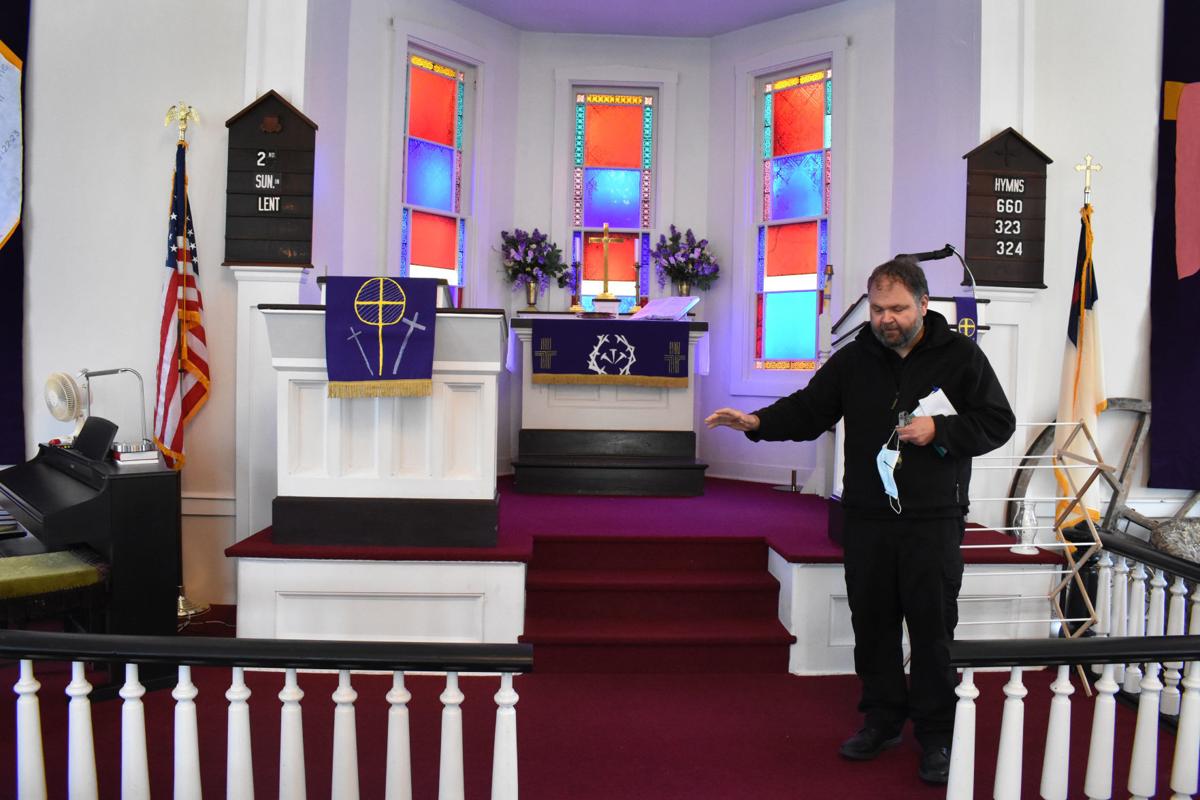 Unger stands in St. John’s Lutheran church, one of the three churches in Harpers Ferry where he is head pastor. 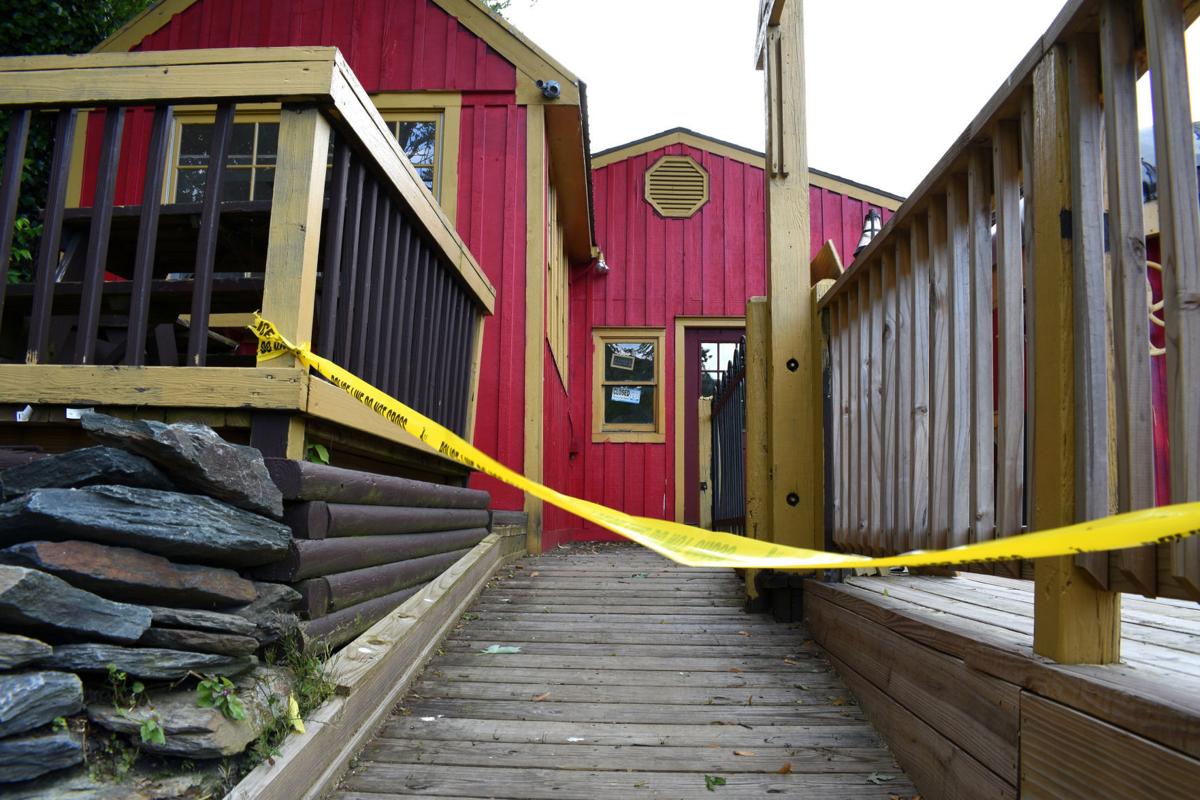 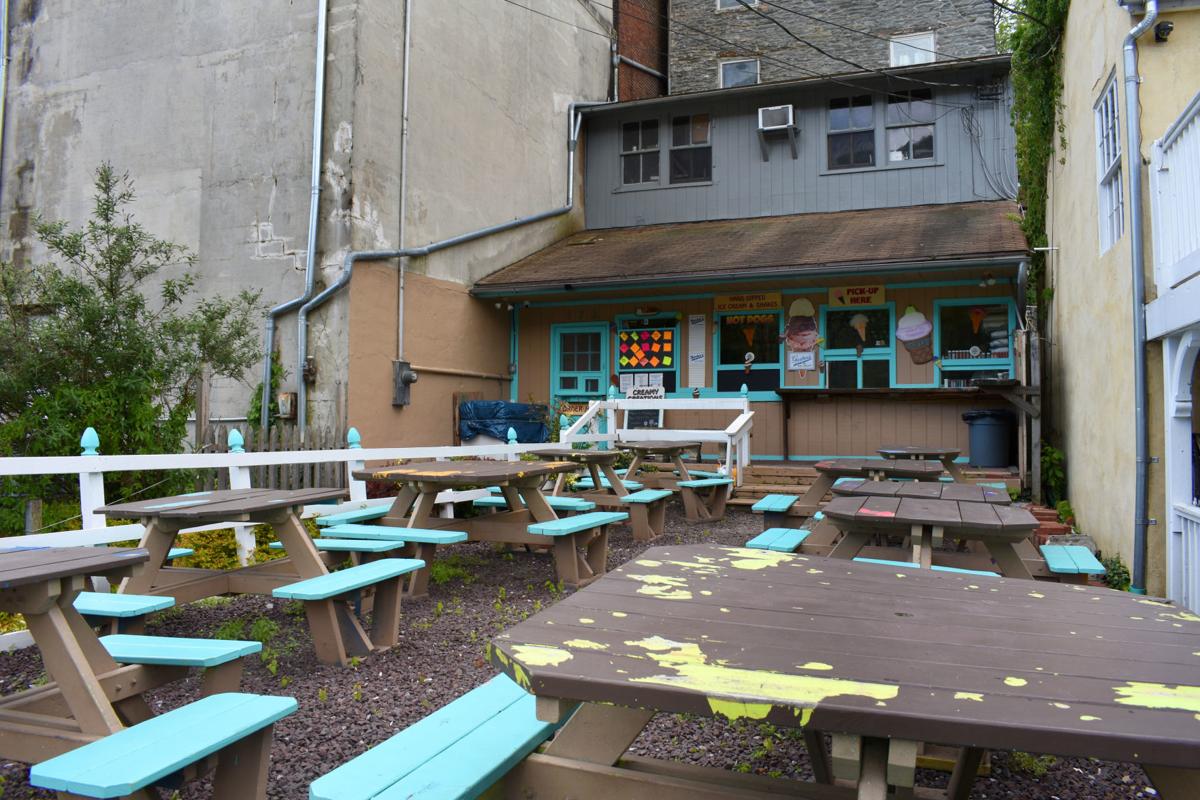 A sign hangs out front of The Vintage Lady in Harpers Ferry. The small business — which sells West Virginia-made jewelry, beer, wine and other collectibles assembled in the Mountain State — attracts tourists from across the world.

Sen. John Unger II, D-Berkeley, sits in a gazebo nearby United Methodist Church at Camp Hill, in Harpers Ferry, where he is head pastor.

Cindy Dunn, owner The Vintage Lady in lower town Harpers Ferry, is one of many local business owners weighing the risks of reopening. The shop attracts tourists from across the world, which is a drawback during a pandemic.

Unger wants to believe God has spared the Mountain State, but he wants the data to prove it.

Unger stands in St. John’s Lutheran church, one of the three churches in Harpers Ferry where he is head pastor.

Eighty-eight people have died of the coronavirus in Frederick County, Maryland, only a 15-minute drive from three churches in Harpers Ferry, where Sen. John Unger II is head pastor.

Sixty-four West Virginians total had died of COVID-19 as of Friday evening.

West Virginia’s three easternmost counties — Morgan, Berkeley and Jefferson — are surrounded by four counties that each have a population of more than 150,000 people. Totals for those combined were 2,040 cases and 73 deaths as of Friday evening.

For weeks, Unger said he’s urged state health officials to release data showing COVID-19 cases broken down by county. He submitted a Freedom of Information Act request to the state Wednesday requesting the data, fearing he wouldn’t get it otherwise.

The state must show the total number of tests conducted in each county, not just the positive cases, to prove sufficient testing has been done in the region that was West Virginia’s original hot spot, Unger said.

"I suspect if we do adequate testing, we're going to find out we have a real problem. We don't know if there's a spike here. But the spikes are occurring all around us."

In an email, a Department of Health and Human Resources spokesperson wrote that the agency has received Unger’s request “and will look into whether we are in possession of these data. I do know the dashboard continues to evolve with helpful and important information.”

Virginia is releasing COVID-19 data by ZIP code, showing the total number of tests administered, not just the positive cases.

Unger’s biggest concern lies with the sharp increase in cases just outside the Eastern Panhandle over the last two weeks. In Frederick County, over a five-day period this week, 326 new positive cases and 26 deaths were reported.

In the three panhandle counties, 54 new cases and four deaths were reported over the same five-day period. Twenty-four of those cases were reported Monday in Berkeley County.

“I suspect if we do adequate testing, we’re going to find out we have a real problem,” Unger said. “We don’t know if there’s a spike here. But the spikes are occurring all around us.”

Unger hopes he’s wrong and testing has been sufficient in the Eastern Panhandle. But as local businesses weigh the risk of reopening, and more people are sent back to work, he said, counties must have region-specific data so the public doesn’t operate under false sense of security.

“I want us to move forward, but I want us to open up with our eyes wide open and not blindfolded.”

‘The town’s not open’

A mother hauling three young children in an SUV with Maryland tags stopped at the four-foot tall sign placed in the middle of the road Tuesday morning.

“SAFER AT HOME! by order of the Governor,” it reads.

She pulled a slow three-point turn and headed back the way she came.

Until further notice, the sign continued, there would be no public parking, restrooms or trash cans in the town of Harpers Ferry.

A young woman and her dog shuffled down the sidewalk soon afterward; she wore a surgical mask around town because “you never know when these tourists will just pop out from behind a bush,” she said.

“All it takes is just one person to park illegally,” said Cindy Dunn, a longtime business owner in lower town Harpers Ferry.

The weekend before, tourists were a problem, she said. Parking was blocked off, but some found places to pull off the road and stretch their legs.

Harpers Ferry has multiple signs placed throughout the town’s main stretch, Unger said, “but they’re ignoring them. ... The town’s not open.”

They are as interconnected to West Virginia’s Eastern Panhandle as any other county in the region, he said.

Unger, who has represented the district since 1998, said he’s struggled getting people to understand how things work in the Eastern Panhandle. He often gets shut down when trying to argue eastern West Virginia is a suburb of the nation’s capital.

Ronda Lehman, coordinator for Jefferson County Teen Court, has lived next to the Shenandoah River in Harpers Ferry for 17 years.

“I can spit on Loudoun County, Virginia, from my house,” she said.

Lehman, who is also a nurse at the Jefferson Day Report Center, said state borders are an afterthought in the panhandle. People may live in West Virginia, but their job is in Washington, D.C., their family physician practices in Virginia and they attend church services in Maryland, she said.

At the Martinsburg Veterans Affairs Medical Center, seven deaths and 68 positive cases are connected to COVID-19. It remains unclear whether these veterans and employees are West Virginia, Maryland or Virginia residents.

Sen. Patricia Rucker, R-Jefferson, said by phone that her husband is a nurse on the front lines of the pandemic in Maryland. Her husband’s drive across the border for work each day isn’t unique.

“It’s called the tri-state [area] for a reason. There’s a large percentage of my constituents who work in Maryland and Virginia,” she said.

“As we open the state back up, these tests should be available to all employers and their employees — restaurant workers, store clerks, coal miners; everyone,” he said in a May 5 release. “This is to protect their families, co-workers and customers from the spread of COVID-19.”

Gov. Jim Justice announced during his news briefing Thursday free testing in Berkeley and Jefferson counties as well as Raleigh and Mercer counties this weekend.

Additional testing is scheduled for Cabell, Kanawha, Marion and Monongalia counties next weekend.

Weighing the risks of reopening

The Vintage Lady closed March 16, the day Justice declared the state of emergency for West Virginia.

A small map of the United States on the wall by the register in her store marks the homes of tourists who stop into The Vintage Lady each month. In just 16 days in March, Dunn greeted visitors from New Orleans, southern California, Florida and South Dakota, to name a few.

Dunn figured it was time to close shop after countries and cities where tourists were coming from were being ravaged by COVID-19.

“I have no regrets when we closed, I feel like it was a solid decision,” she said. “I think it’s the reopening that I’m just not sure what to do.”

The National Park in Harpers Ferry remains closed, but that could soon change, as some national parks across the country have been given the green light to reopen.

Maryland, Virginia and Washington, D.C., aren’t reopening at the rate West Virginia is. Dunn fears a mass influx of weary people from those places tired of quarantine life, longing for an escape to the mountains.

Protecting her sole employee, who has helped run the store for a decade, is Dunn’s primary concern. So for now, the decision to reopen is “day by day.”

A few miles away in Charles Town, Marjorie Skinner’s family is weighing their own reopening. Skinner handles financials for her stepson and daughter-in-law’s small Italian restaurant, La Mezzaluna Cafe.

Customers often come from Maryland and Virginia. She described the region as “dormitory,” as residents from each state travel in and out of each other’s backyards every day, and even more so on weekends.

“We do feel that this area is very unlike the rest of the state, and it’s really tricky to treat us the same way,” she said.

Keeping tables 6 feet apart is tough for a small cafe; disposable menus aren’t financially feasible, due to the variety of meals the eatery offers; and automatic hand sanitizer dispensers are expensive. These are just a few of the barriers to the restaurant’s reopening, Skinner said.

Takeout service only will continue at La Mezzaluna for now, Skinner said. Reopening under state and federal guidelines is “just very impractical and very risky to do.”

Like Dunn and Unger, Skinner said she understands the need for businesses in the area that are financially hurting to reopen as soon as possible. But she worries about asymptomatic carriers and how one case tied to La Mezzaluna could mean the end for the family business.

“God forbid, if we have an illness because one of our customers unknowingly came and dined when they were ill,” she said. “[Customers] would not forgive us for [that]; that stain would stick.”

Unger hopes the Eastern Panhandle’s counties get a say in their region’s reopening. Just because things go swimmingly in Braxton County doesn’t mean Jefferson County is flattening the curve, he said.

As a man of faith, Unger wants to believe God has spared the Mountain State from the pandemic’s devastating effects. But as a public servant, he wants the data to know what’s true.

“If we’re not careful, it could overtake us; and even before we find out it’s here, it could be too late, and the death rates will start climbing very quickly,” he said. “I hope I’m wrong.”