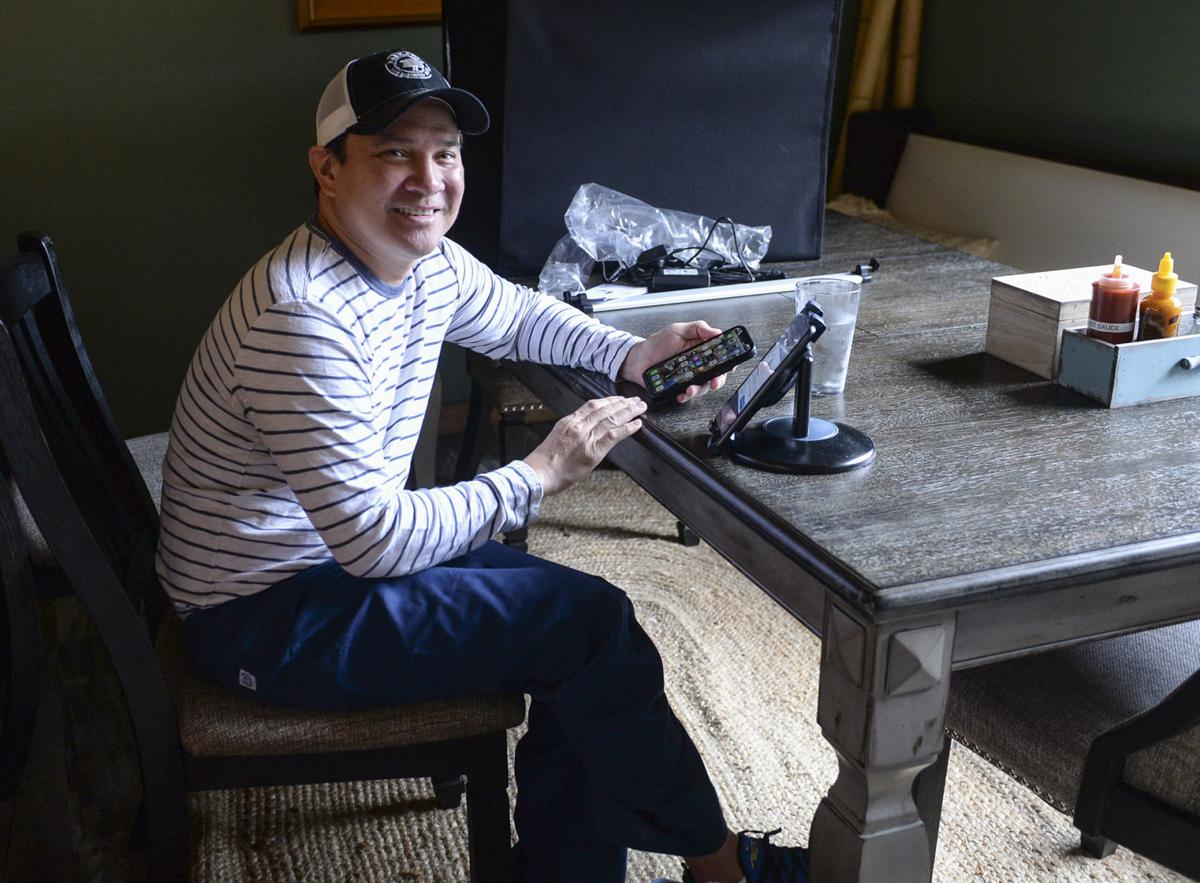 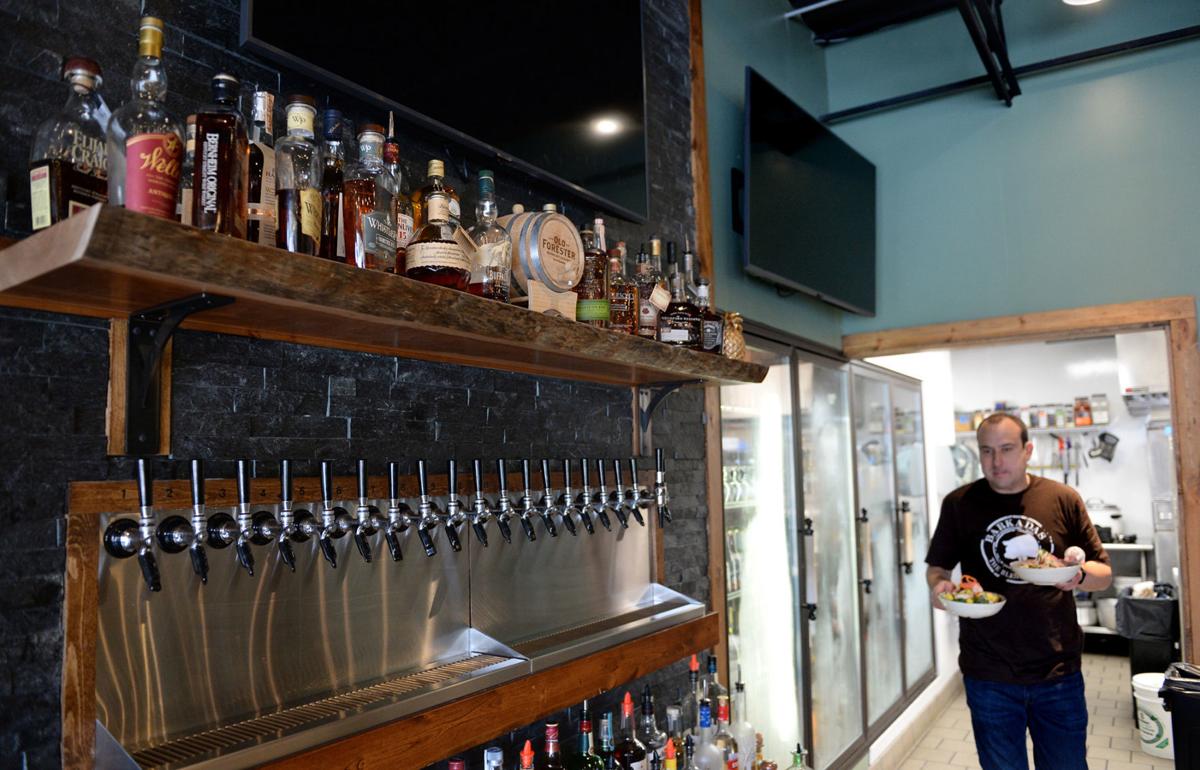 Chef Paul Smith brings out two dishes from the kitchen through the extensive bar featuring whiskey and about 20 beers on tap at Barkadas. 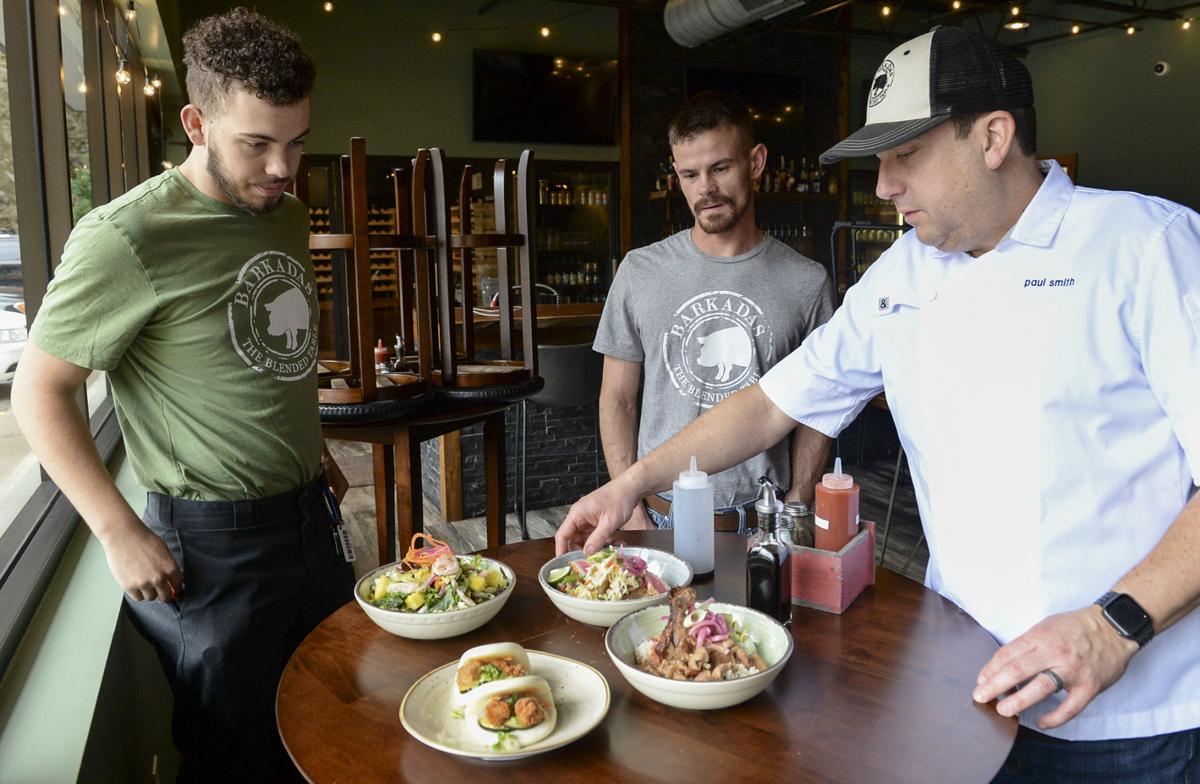 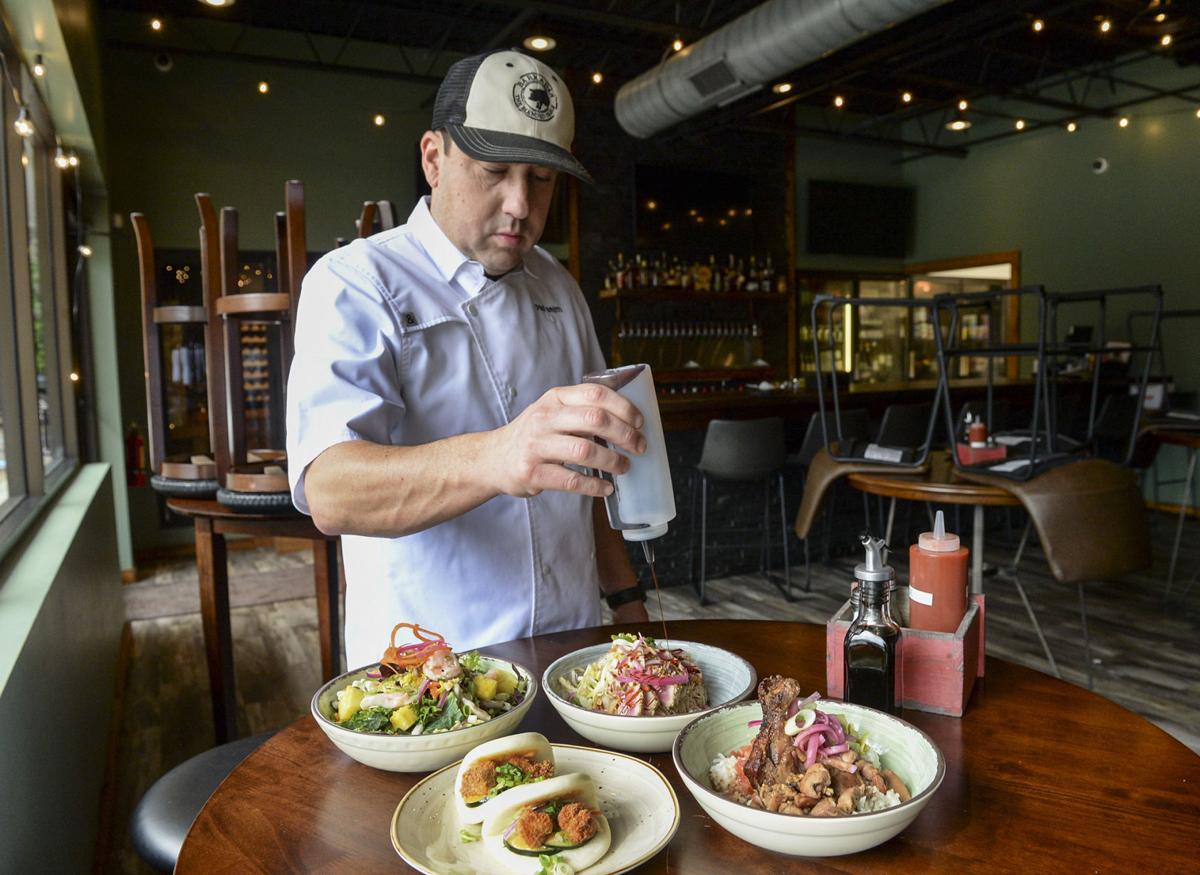 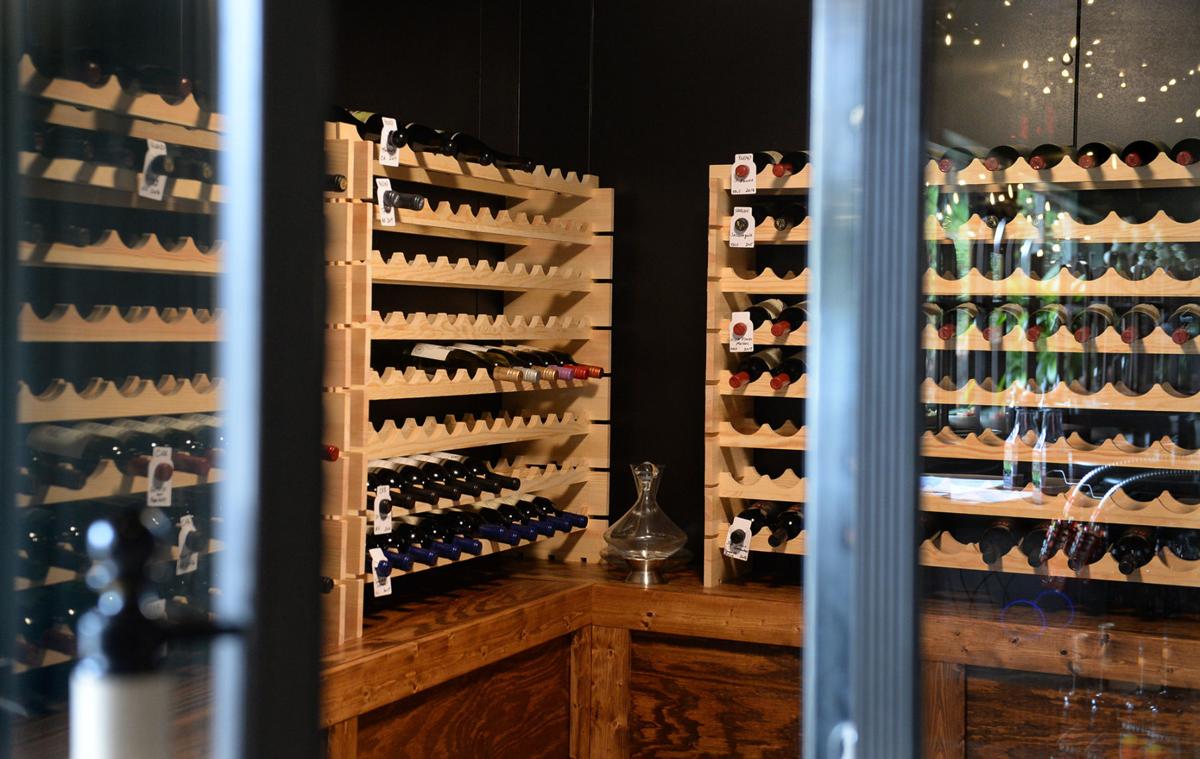 Barkadas large wine coolers are left over refrigerators from when the restaurant space was a convenience store. 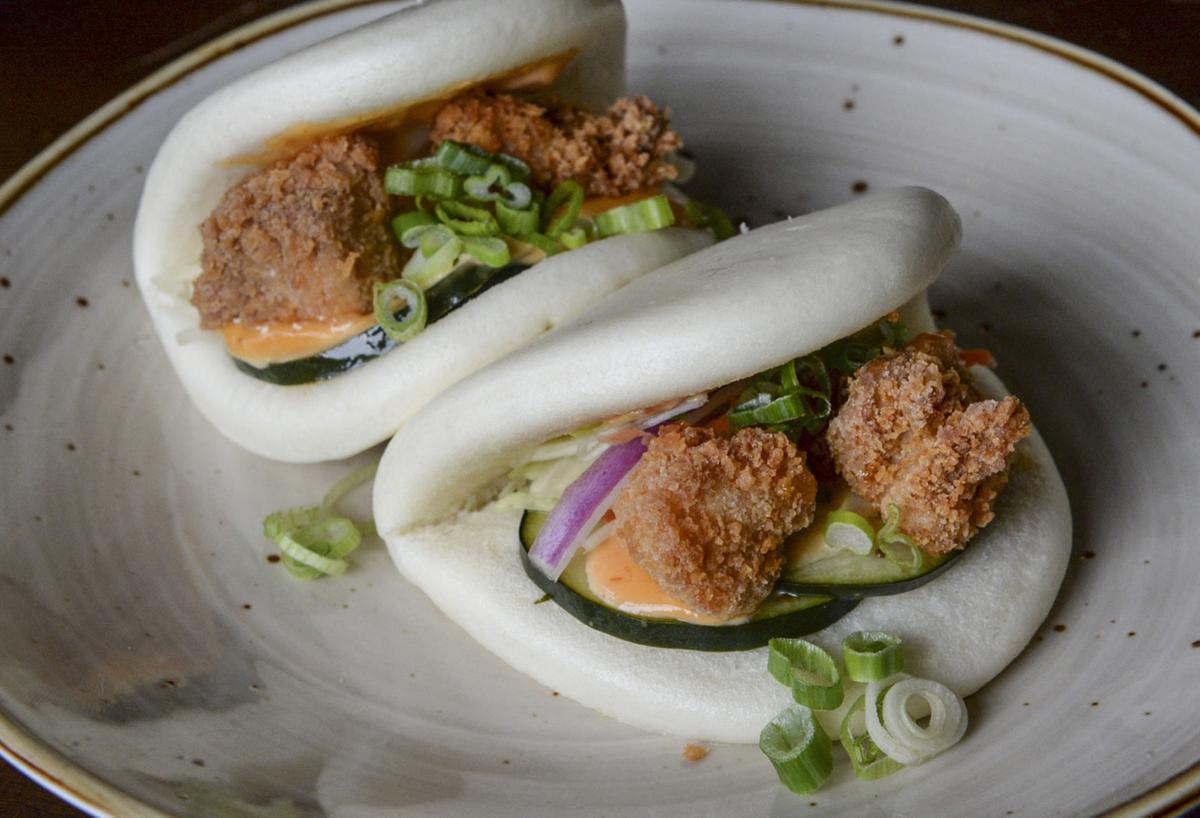 Chicken on bao buns which are soft, pillowy, steamed buns. 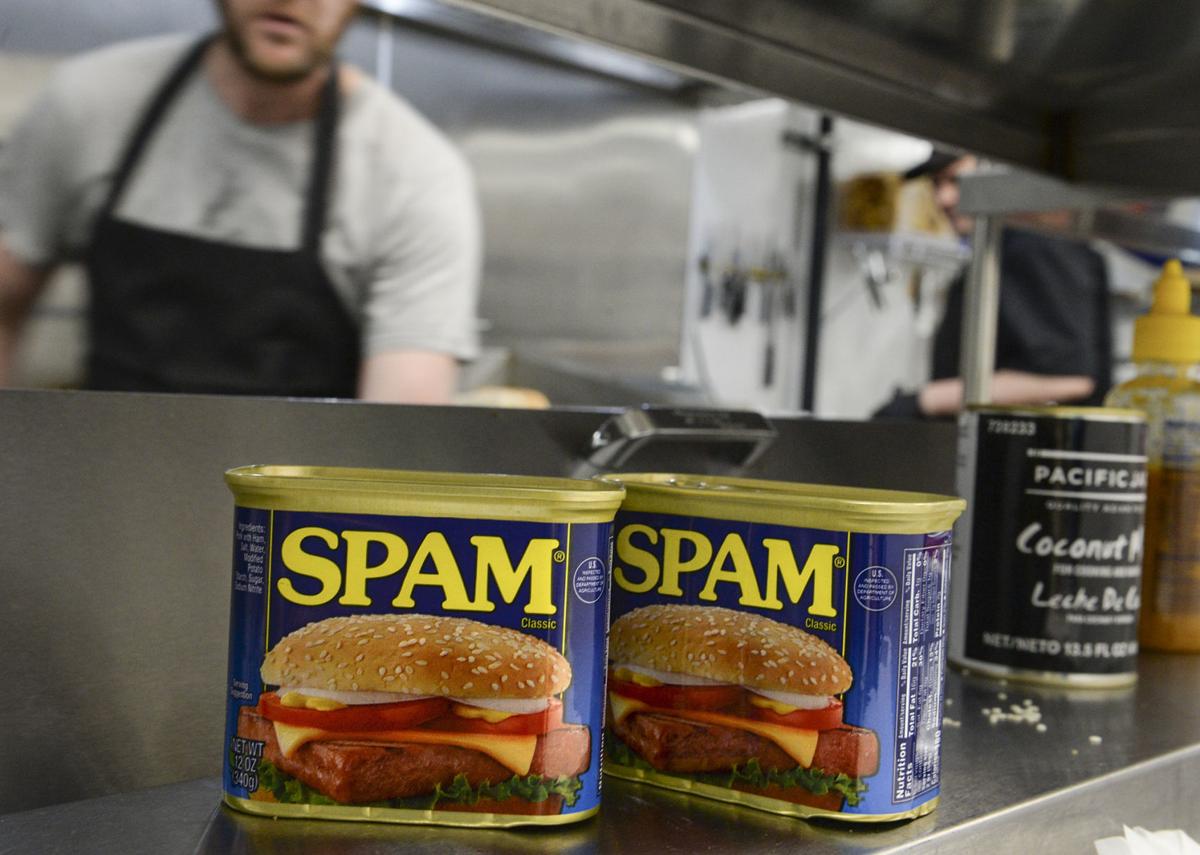 Diners can “Flip it” by adding crispy spam and a fried egg to their order. Spam is a popular food item used in Filipino and hawaiian cooking and is included in an order of loaded bar fries. Spam is also in the Flip’d wedge salad and the crispy spam hand rolled burritos. 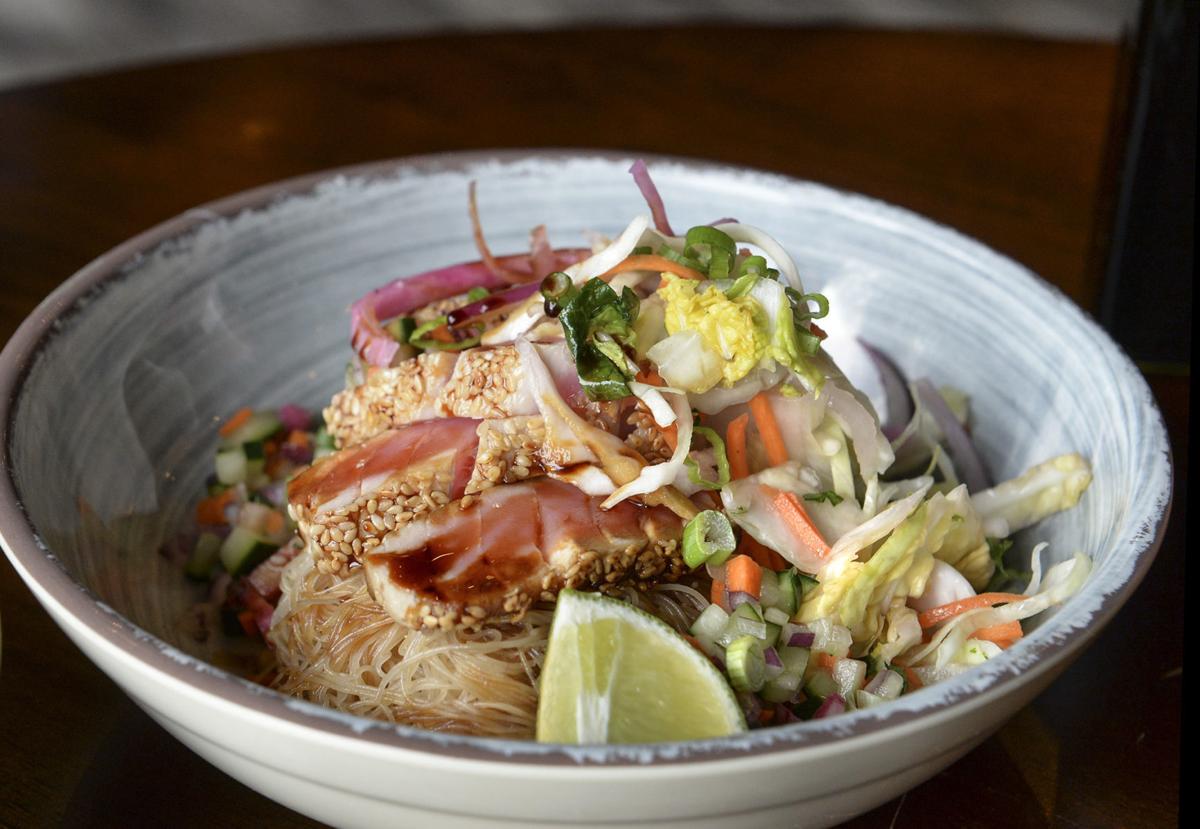 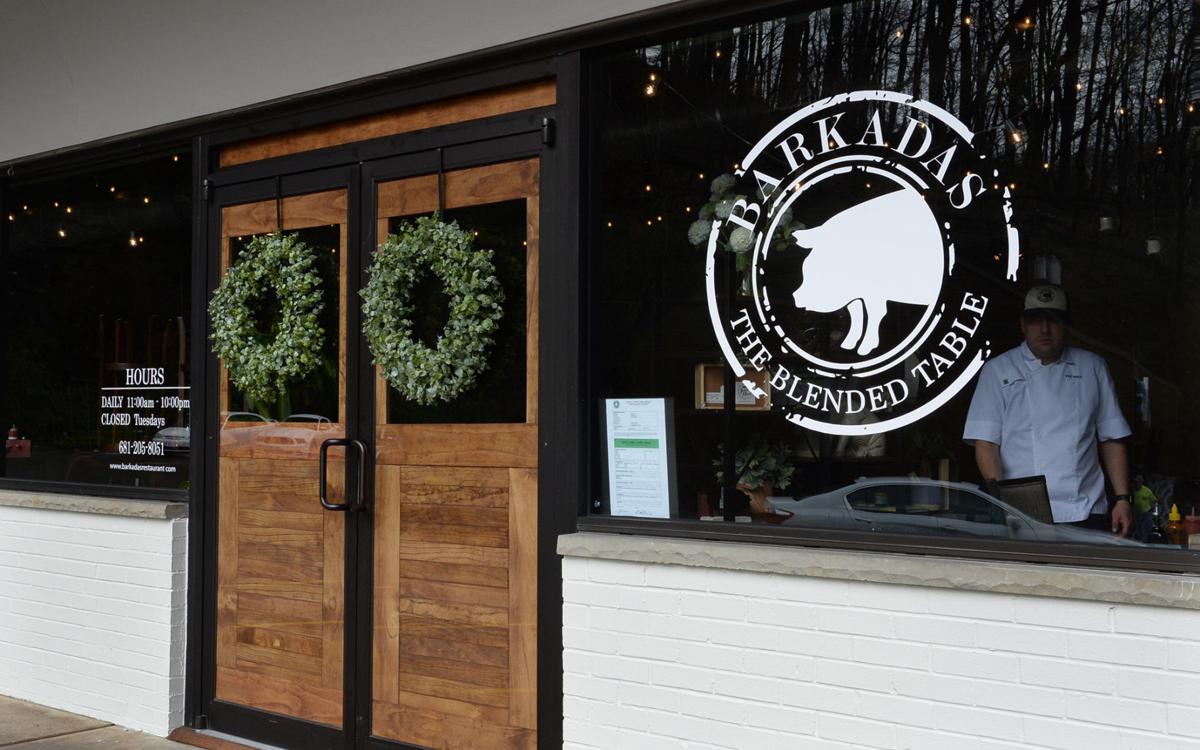 Barkadas is located on Cantley Drive, in Fort Hill, in the space of a former convenience store. 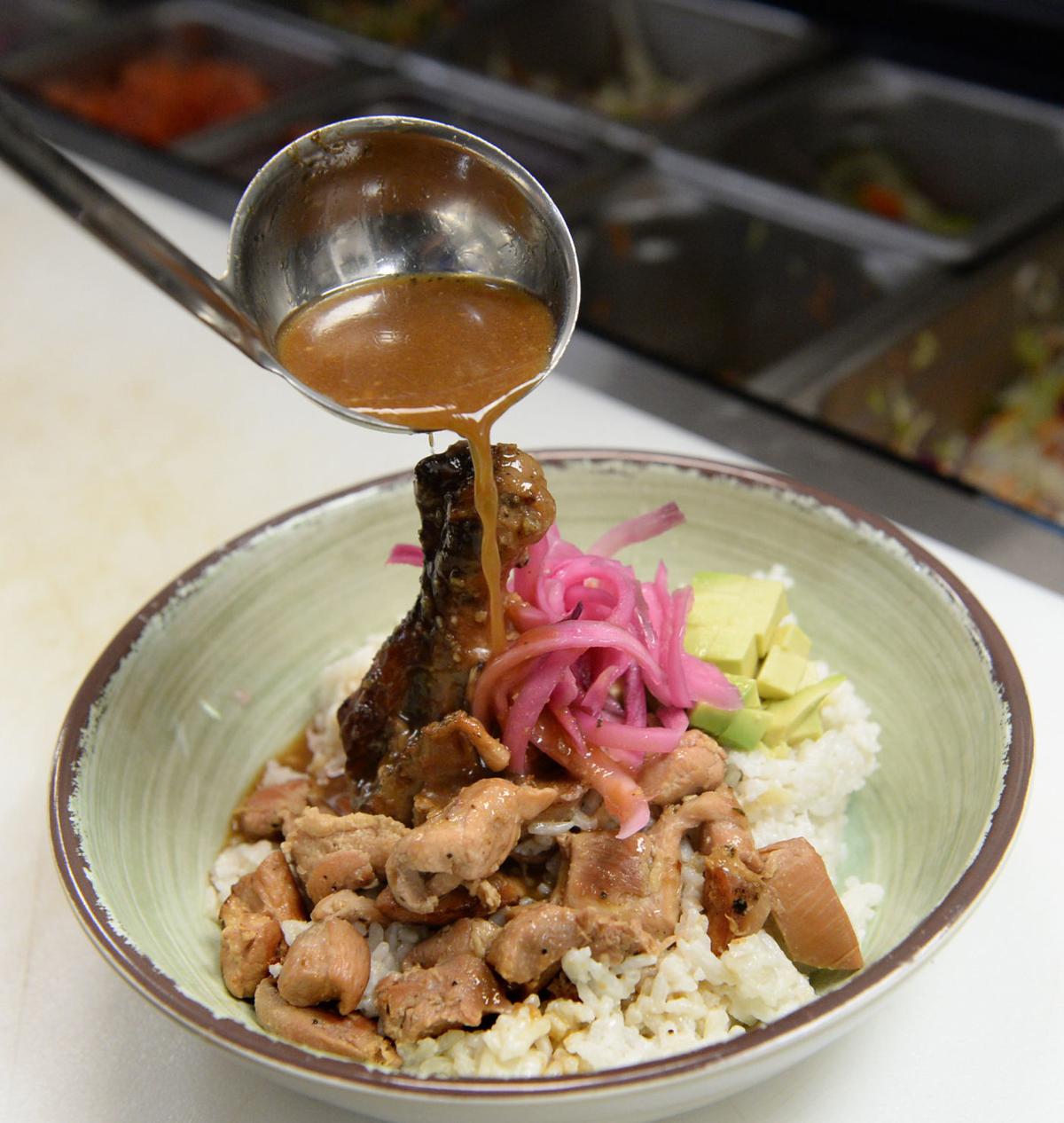 Chef Paul Smith brings out two dishes from the kitchen through the extensive bar featuring whiskey and about 20 beers on tap at Barkadas.

Barkadas large wine coolers are left over refrigerators from when the restaurant space was a convenience store.

Chicken on bao buns which are soft, pillowy, steamed buns.

Diners can “Flip it” by adding crispy spam and a fried egg to their order. Spam is a popular food item used in Filipino and hawaiian cooking and is included in an order of loaded bar fries. Spam is also in the Flip’d wedge salad and the crispy spam hand rolled burritos.

Barkadas is located on Cantley Drive, in Fort Hill, in the space of a former convenience store.

Chef Paul Smith had an order to prepare. But first, he stuck his arms under the faucet and burst into robust song — surprising, not just in volume but in the apparent level of cheer, given the peaks and valleys he has traversed in recent weeks.

He belted it out with gusto and grinned, a tongue-in-cheek reference to the government’s suggestion about how long we should all be washing our hands these days — long enough to sing the “Happy Birthday” song.

“We’re wearing gloves when we deliver to the cars. We’re wiping down all the handles almost every time someone comes in. We’re just doing everything we possibly can to really, you know, limit or mitigate the contact,” said Smith, a local celebrity chef and the well-known new co-owner of Barkadas.

The Filipino restaurant began, really, as a vague dream that took shape over the course of several decades and finally opened — to rave reviews and lines of enthusiastic customers willing to wait patiently for a table — a whopping 21 days before the shut down due to COVID-19.

“I mean, I waited. I’ve been back in Charleston for 13 years and I waited for 13 years to do this. And three weeks into it, this happens,” Smith said.

He offers a string of mild profanities.

“I cried, you know?” he said. “It is tough as hell right now. I have 25 people’s livelihoods in my hands right now, and my own and my dream and my home and everything that you put up on it.

“But as long as I have two hands that I can get back there and cook with, and people can come in and buy food, I’m going to keep moving forward.”

As a boy growing up in Charleston, Smith stood on a crate with his grandfather, who cooked weekly Italian meals at the Glen Ferris Inn and baked at a convenience store at Fall’s View. As he got older, he developed a passion for unique flavors made with love.

“I grew up with a ton of Filipino friends at Charleston Catholic. My best friend’s a Filipino. So any time I would go to the house, there’d be a rice cooker with rice in it and there would always be something in the fridge, whether it was adobo, whether it was a whole fish,” he said. “I learned a lot about cooking and just a lot about eating different things going over to people’s homes.”

After graduating at the top of his class at the Culinary Institute of America, he did a stint as a pastry chef at the Biltmore and then worked at the Windsor Club in Vero Beach, Florida, before returning to Charleston.

He was the executive chef at the University of Charleston and then moved to Buzz Food Service, best known locally for launching Charleston Restaurant Week in the wake of the 2014 water crisis, where he worked with — and sometimes advised — some of the best chefs in the state.

He developed his skills. He developed a following. And along the way, he nurtured a dream of striking out on his own.

“I wanted to think outside the box. You know, everybody can do an 8-ounce filet and mashed potatoes. That’s great. But I just wanted to do something different and something that is a little bit more of an experience,” Smith said.

He remembered the flavors — and the fun — of his youth, hanging with his “barkadas,” a Filipino slang term for BFF, “your crew, your homies, your inner circle of friends,” Smith said.

“It’s your family outside of your blood family.”

As the dream began to take shape and the time for opening his own place neared, Smith turned to his own barkadas and their families — especially a handful of Charleston-area “aunties” who had cooked literally thousands of traditional Filipino meals and were willing to share their secrets.

“So for the last year, I’ve been asking questions, eating as much Filipino food as I possibly can, and, you know, really just kind of learning as much about Filipino cuisine as possible,” Smith said.

“I just went over [to their homes] and we cooked, and I learned over the summer and right before we opened.”

There is — literally — a world of difference between reading a recipe and cooking with someone who cooks for love, he said.

“A lot of the recipes are ‘this much of this’ or ‘a dash of that.’ And I was actually watching that. We were cooking it together,” he said. “It’s kind of like your grandma’s grilled cheese sandwich. You can never really make it because you don’t have that grandma love. I was trying to get Filipino auntie love.”

He took all of the recipes and melded them, adding his own touch with an eye toward keeping the flavors as authentic as possible, relying on traditional foods like pancit noodles, adobo and lumpia — spring rolls wrapped in a paper-thin pastry.

He and his business partner/barkada, Jay Cinco, took a shuttered old convenience store and transformed it into a casual, cool neighborhood restaurant with a hip, upbeat vibe that would fit right into the foodie scene in much bigger communities.

“There aren’t a lot of Filipino restaurants. So we wanted to make sure that our staff had the answers.”

He introduced bao buns, hand-sized servings of soft, warm dough that hold a variety of fillings so that each bite is layered with flavors that stand on their own but work well together.

The foods are different, not your usual Charleston fare.

“For our starters we have the bar snack, which is probably one of our No. 1 sellers. It’s a fried wonton chip with a sambal ranch,” basically a spicy chili garlic paste that offers a little heat, a little cool.

Located at the base of Fort Hill, Barkadas opened to crowds of fans and followers eager to try out the new place. Peak times at week’s end meant upward of 300 hungry diners per day with a wait for tables — and people waited, willingly, for a chance to try out the newest treat in town.

“Once they walk through the doors I want them to ...” — he waved his glove-covered hand in the air like a magician — “... everything just goes away and they come in and have fun and they are hanging out with their barkadas. And instantly when they come in, they’re one of our barkadas, and it’s a whole family thing.”

He wanted to create not just an experience but a sanctuary of sorts from the outside world.

Quite the challenge when you can’t let customers in the door.

“We’ve got the phones ringing. We’re doing deliveries. We’re doing everything possible in order that we can to keep the lights on and keep people employed,” Smith said.

No one, he said, is making a profit right now. It’s about keeping people employed.

“Think about what the restaurant industry here has gone through over the last six years. Between the water crisis, the derecho, the tornado ... if there is a more resilient group, I don’t know it,” he said.

But the current crisis threatens his own place and countless others like it.

“I mean, I think it puts everybody in jeopardy, not just restaurants, but businesses in general.”

So to Smith’s way of thinking, if the COVID-19 crisis threatens them all, then maybe the solution will take them all coming together in a way they hadn’t quite managed before the pandemic began.

“Of course I want you to come here and dine. But I also want you to go to Bluegrass Kitchen and Lookout and Ristorante Abruzzi and Sam’s and Ichiban and 101 and Soho’s and so on and so forth, because I want everyone to succeed,” he said.

Not just restaurants — businesses in general.

“I hope if there is some silver lining in this situation that people really think about going to a local-owned restaurant or buying local from wherever. Like, go to the Capitol Market and buy your products, go to Ooh La Lucy and buy your clothes, go to Tony Paranzino’s and get your suits tailored [at Tony the Tailor’s], go to Taylor Books or Mea Cuppa and get your coffee,” Smith said.

“What I really hope this is, is a mind shift. Like, ‘This is our community as West Virginians, and let’s support West Virginia,’” he said. “We have so many great things here.”

Barkadas Restaurant is located at 100 Cantley Drive in Charleston. For more information, visit their Facebook page or website, www.barkadas restaurant.com, or call 681-205-8051.

Maria Young can be contacted at Maria.Young@wvgazettemail.com.