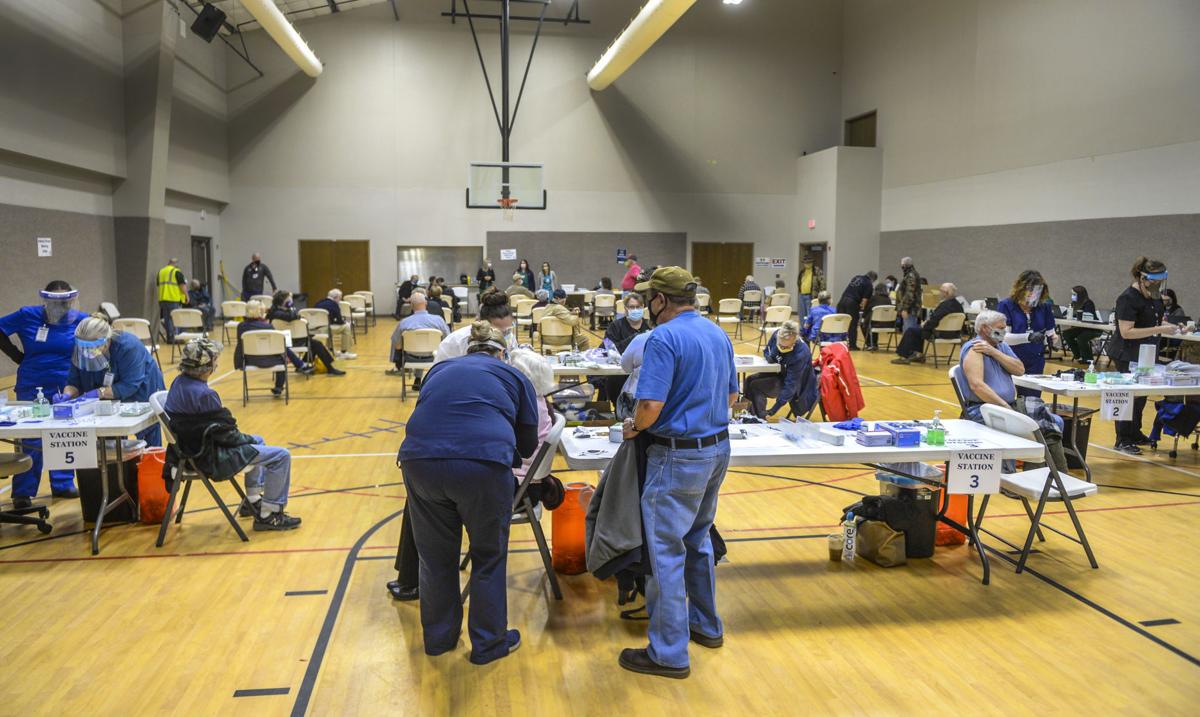 Health care workers operate on Thursday in the gym of Gassaway Baptist Church. 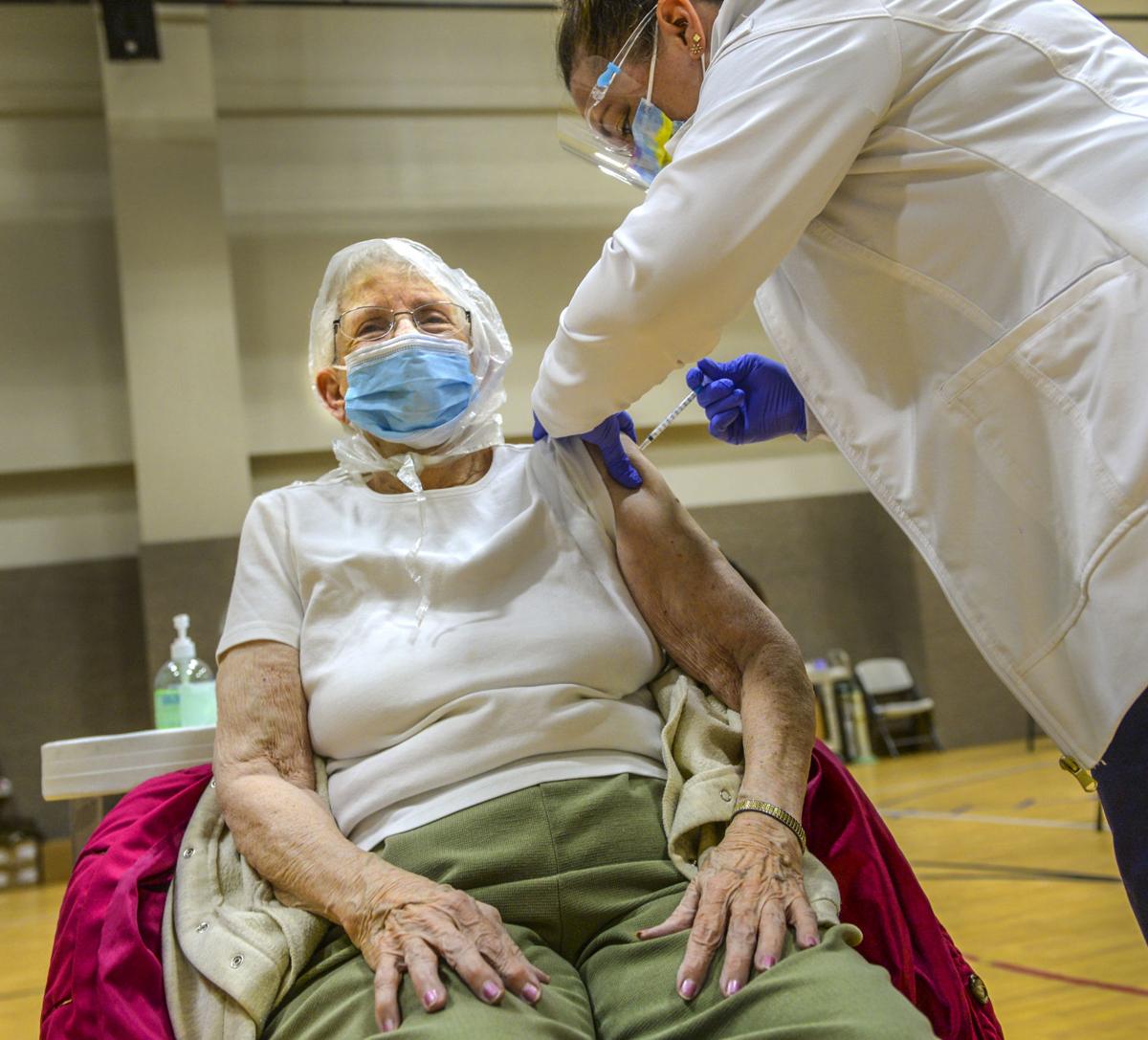 Shirley Lloyd, 85, of Flatwoods, gets her second dose of the COVID-19 vaccine Thursday at the Gassaway Baptist Church from nurse Angela Carter. 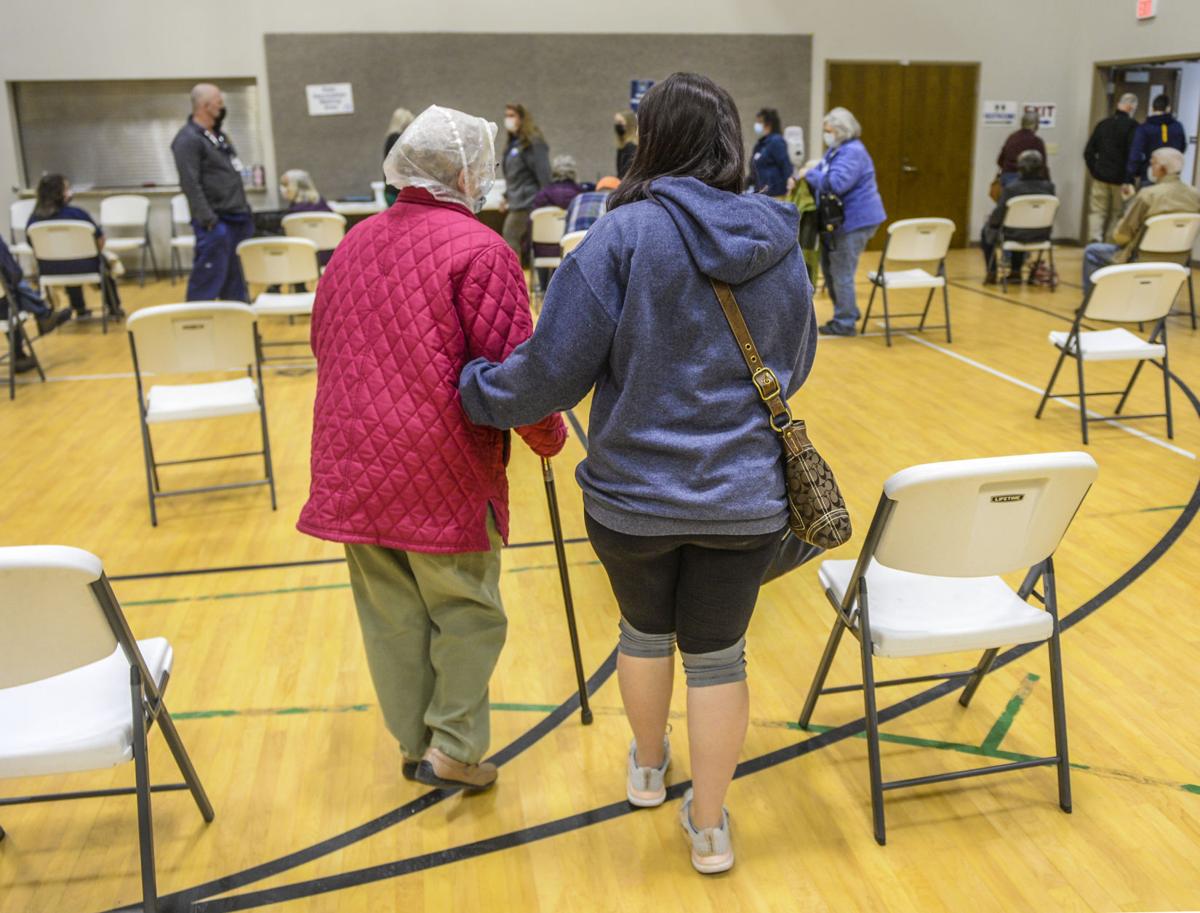 Granddaughter Bridgett Carson helps her grandmother Shirley Lloyd, 85 to her car after getting her second dose and waiting at the Braxton County vaccine clinic Thursday. 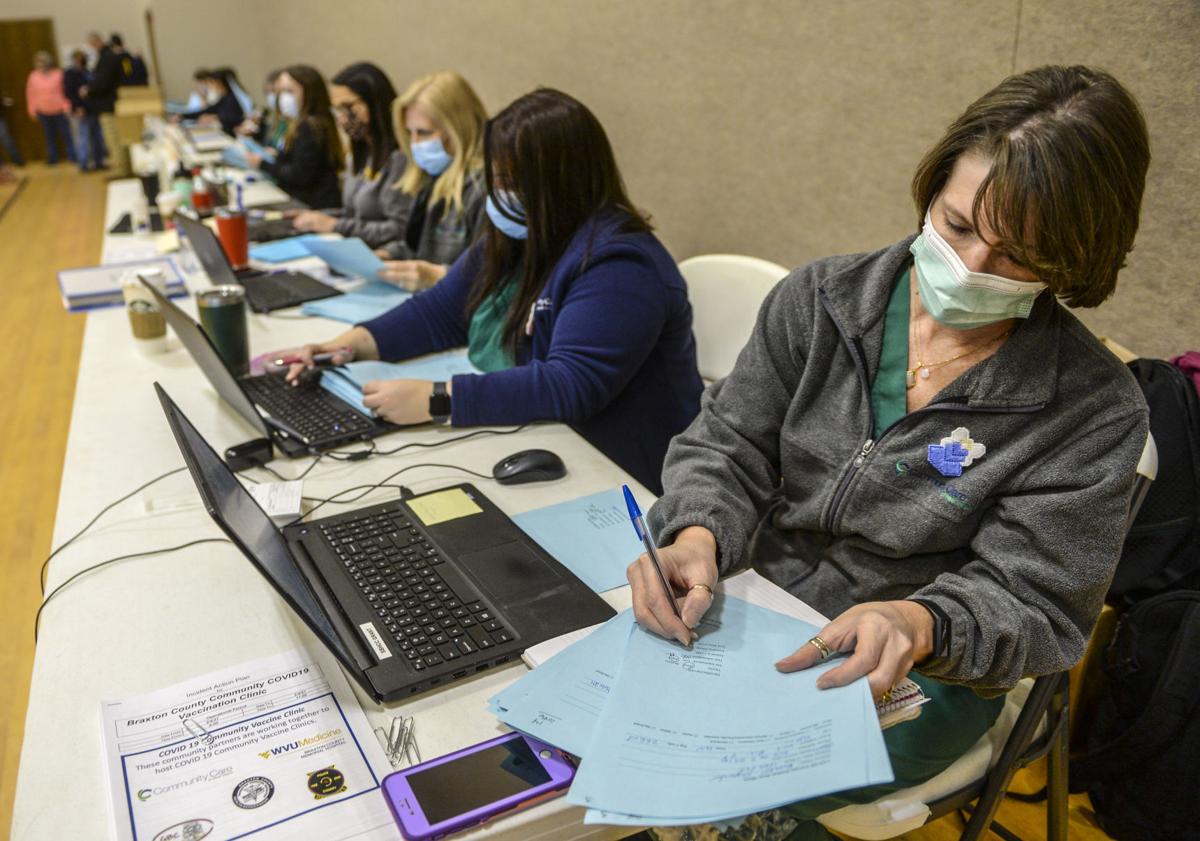 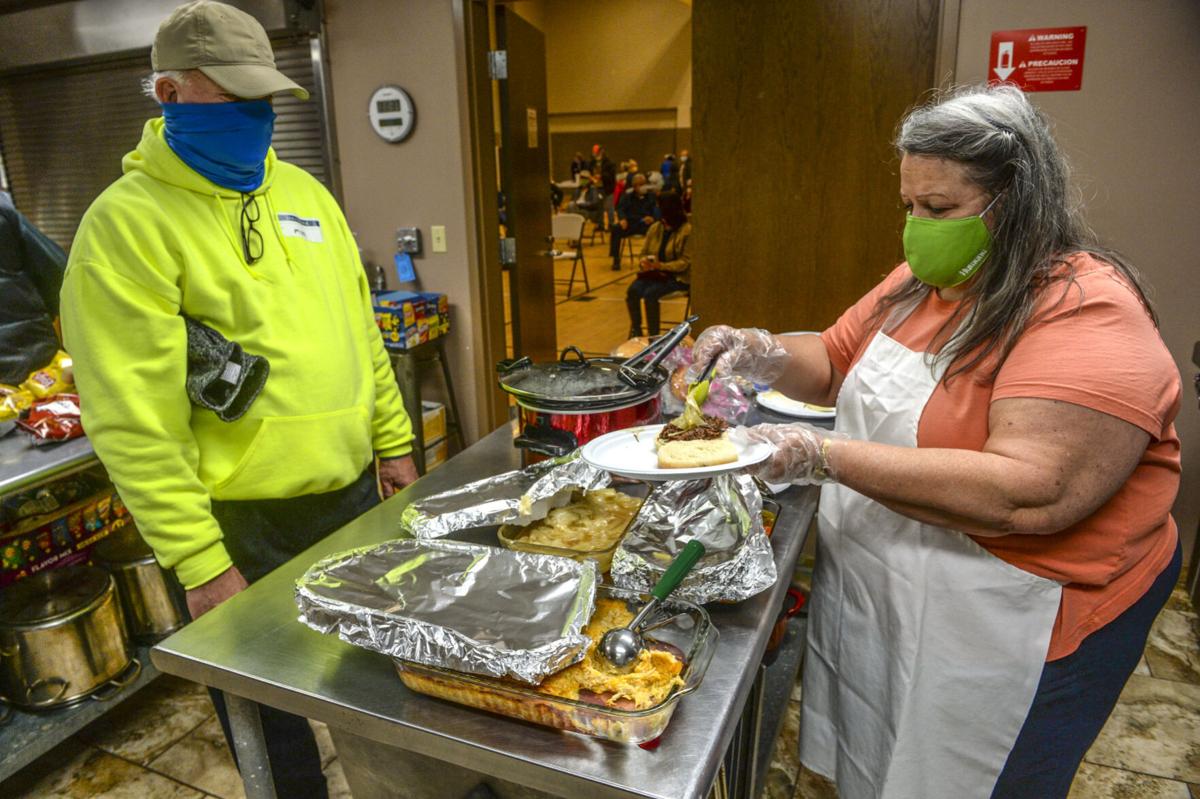 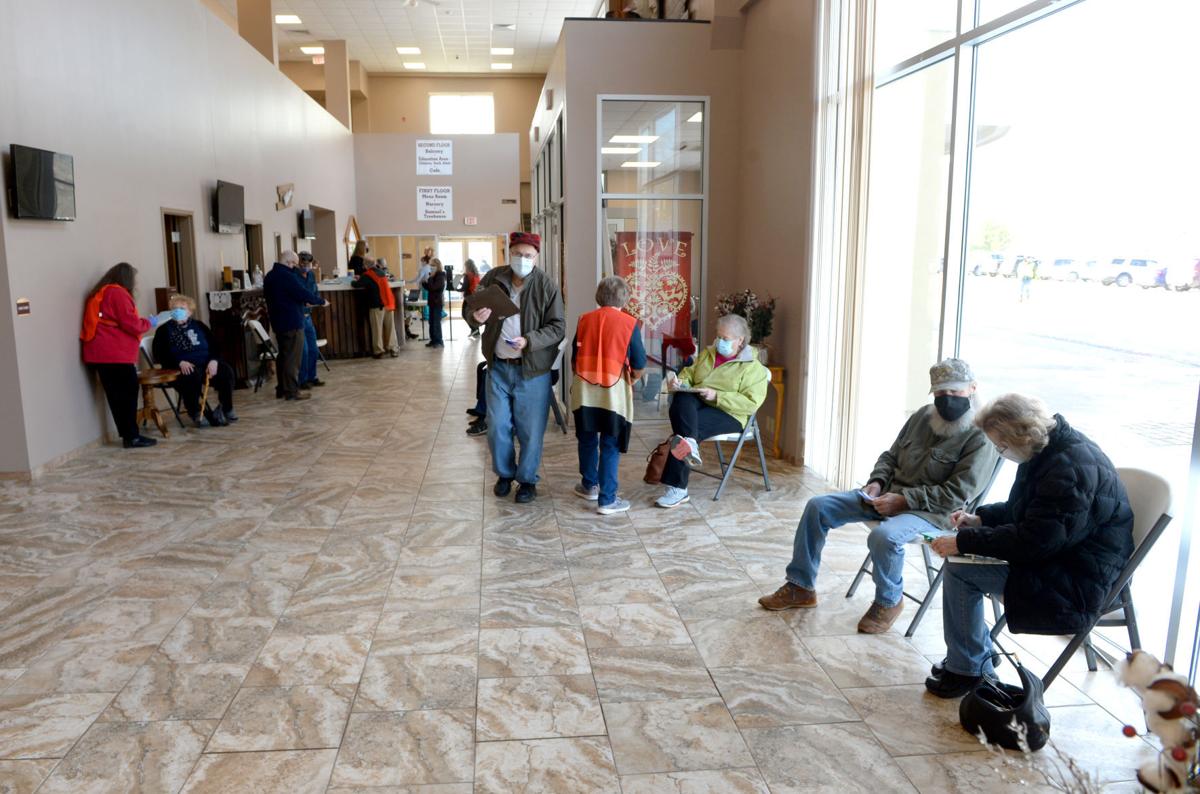 Residents fill out paperwork in the front hallway prior to getting the vaccine at Gassaway Baptist Church. 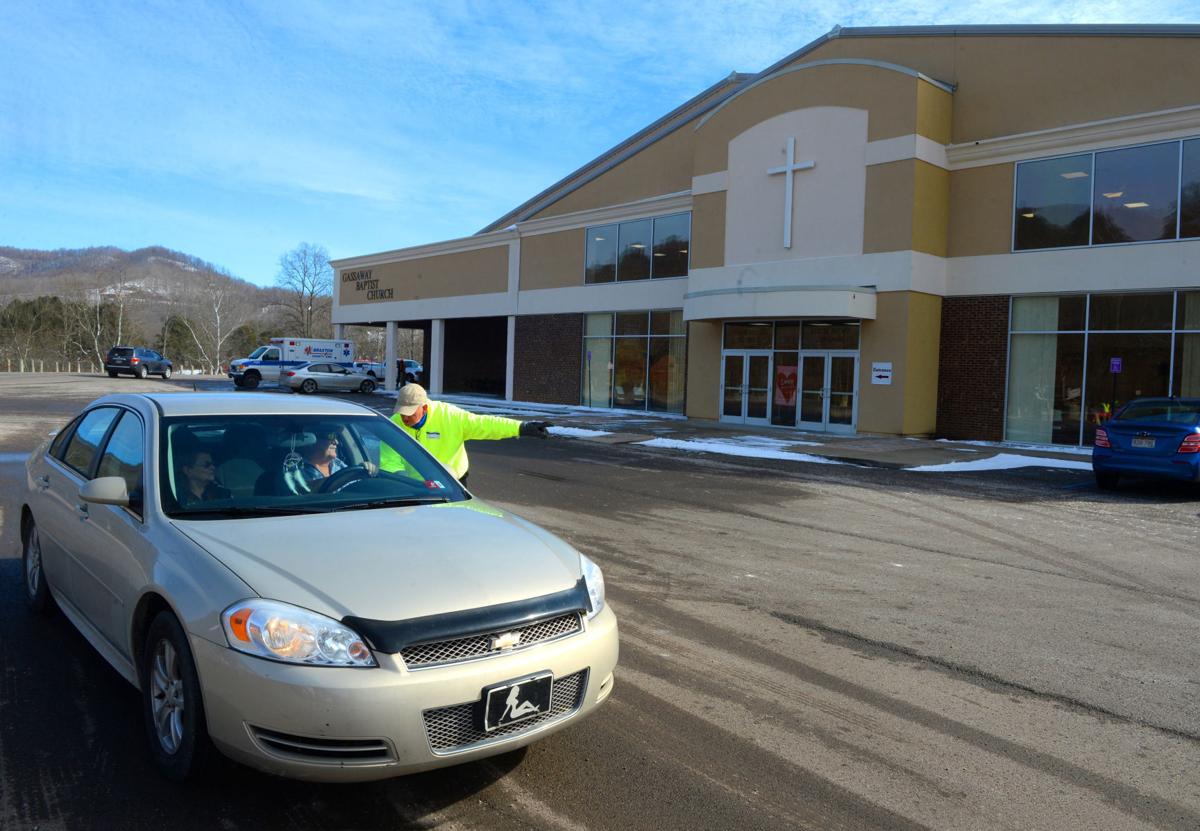 Church volunteer Mike Chapman directs a couple on where to park before getting their vaccine at Gassaway Baptist. 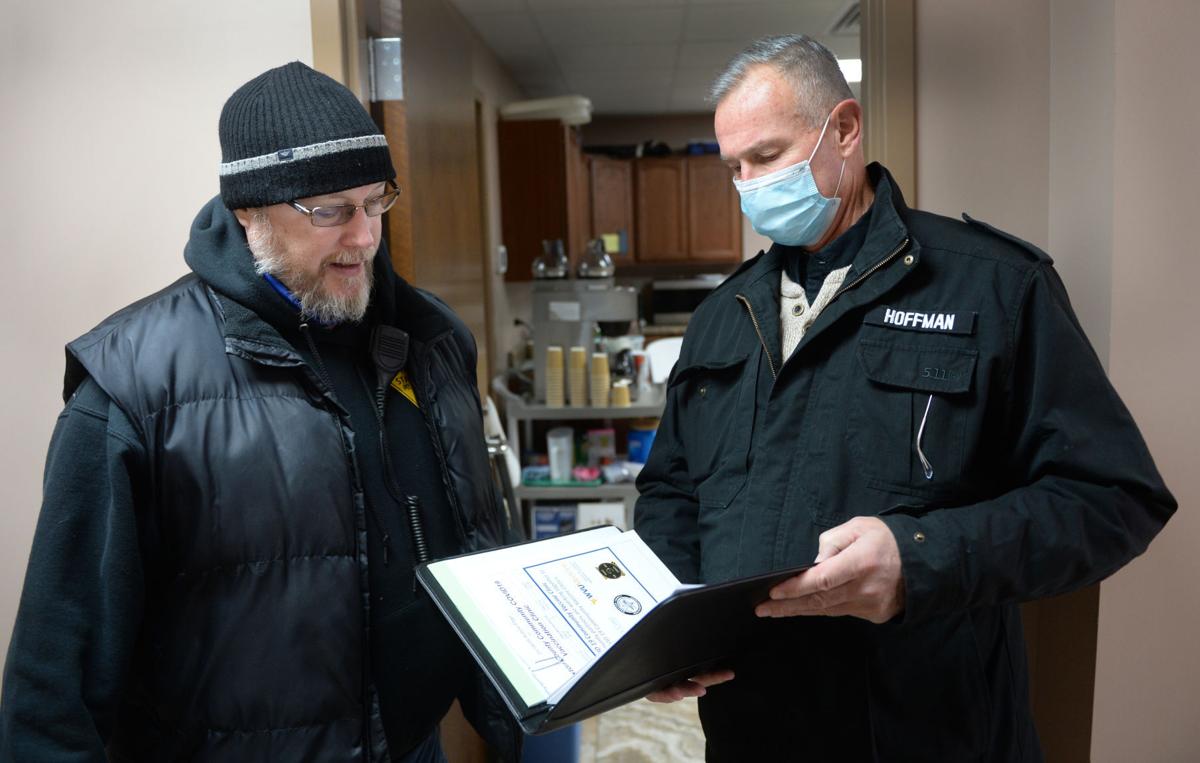 Health care workers operate on Thursday in the gym of Gassaway Baptist Church.

Granddaughter Bridgett Carson helps her grandmother Shirley Lloyd, 85 to her car after getting her second dose and waiting at the Braxton County vaccine clinic Thursday.

Gassaway — Right in the heart of the Mountain State sits Gassaway Baptist Church, where Thursday more than 900 West Virginians received a dose of the COVID-19 vaccine.

Gassaway Baptist has served as a regional vaccine site for West Virginia’s central region, administering nearly 3,000 shots to residents since vaccines were made available. Serving a predominantly rural population, a team of healthcare, faith and emergency operations workers run the site.

These clinics are no small operation, and people have taken notice.

Clinic workers said Thursday while they are responsible for serving the state’s central counties, people from Boone, Monongalia, Kanawha, Raleigh and Taylor counties have trekked to Gassaway just on the good word they heard from friends about the site.

A woman from Ohio even called the church, they said, wanting specifically to be vaccinated in Braxton County.

Gassaway Baptist sits atop a small hill overlooking a bend in the Elk River. The church moved into this facility during Easter 2014.

Driving up the hill into the church’s parking lot, members of the congregation working as volunteers direct traffic. Go left if you live with a disability and need to be vaccinated in your vehicle, or turn right to find parking and walk inside.

In rural West Virginia, a predominantly senior citizen population is often coupled with minimal options and spaces for large community health clinics. But at the newer Gassaway Baptist facility, the massive parking lot looks almost big enough to hold the entire county’s population of some 14,000 people.

Gassaway Baptist Senior Pastor Mark Stump, who has led the church for nearly 38 years, is often found at the front entrance. With a smile and a polite greeting, he opens the door for people and directs them to the action.

The church provided 22 volunteers performing a range of critical tasks on Thursday — a number of clinic leaders inside said this roughly matched the congregation’s normal turnout for these events. For an operation as time sensitive as COVID-19 vaccinations, traffic control is the first place where everything can go wrong.

“In small communities like ours it absolutely takes everybody working together,” Stump said. “This is who we are. This isn’t anything special, and I mean that sincerely.”

In December, the church helped build a tiny home for a U.S. Marine Corps veteran whose home burned down, leaving him homeless and living in his truck. Before the pandemic, Gassaway Baptist was all about building a healthier community, Stump said, and now that deeply held commitment to service is on full display.

“Jesus said ‘I didn’t come to be served.’ He said ‘I’ve come to serve,’ and so that’s the basis for everything we do,” Stump said.

Once inside, Ronna Dittman, of Community Care of West Virginia, and other healthcare workers greet people and point them to registration. People are helped in the church’s front hallway completing needed forms, then clinic workers will escort people into the gymnasium.

Trish Collett, chief operations officer for Community Care, said this second step is just as critical. Providers have been given the option to charge a fee for these vaccines, but she said that would just hurt the community and hinder the whole process.

“We made that commitment as a whole community that we would not charge the recipients of this vaccine an administration fee,” Collett said.

Just outside the gymnasium, a small team underneath a tent equipped with a propane heater run vaccines and forms in and out for people in vehicles.

Inside, on half of the church’s basketball court, six chairs sit a table-length apart where clinic workers administer the vaccines. Meanwhile, a team of workers sit on the sideline punching data into laptops.

Once the syringe leaves their arms, patients plop down in a chair on the far end of the court while workers set a timer and watch for adverse reactions.

Gassaway Mayor Jeff Skidmore, a retired state police trooper running security for these clinics, said people “are just tickled to death” with the operation. Some spent weeks on waiting lists, just hoping they might one day get the call to go to Gassaway Baptist, where Skidmore’s been a member for 17 years.

“Being in the parking lot and talking to people when they go in and out of the building, they’re just so happy, it’s like they won the lottery,” he said.

Jackson said because she’s a healthcare worker, she’s been afraid of infecting her grandparents. On Thursday, she said she felt somewhat relieved, but was still aware of the months of work health care teams must put in to end the pandemic.

Her grandparents, Howard and Marie Singleton of Gassaway, said they felt lucky to be chosen for a vaccine — it was also pretty cool to have their granddaughter assist them.

The Singletons, both 79 years old, said they still plan to stay home, wear masks and only venture out for doctor’s office and grocery store trips. The pandemic is still raging across the world, they said, but they’re excited to be in the direction of back to normal.

“We feel young and we’re healthy enough that we do whatever,” Marie Singleton said. “We’re blessed. We don’t feel like we’re almost 80.”

In the kitchen at Gassaway Baptist is where some of the most important work is happening, however.

John Hoffman, director of Braxton County Office of Emergency Services, said without the kitchen volunteers, the all-day clinics would not be possible. Some of the most important work in emergency response is putting food into workers’ stomachs.

Hoffman, carrying around a black folder with the day’s operation plans, just makes sure everything is going accordingly. So far, his role has been very little, he said, because the various organizations have put together a seamless operation.

“Community Care has really been at the forefront and the lead of this operation,” Hoffman said. “Basically, all I’m doing is putting things in writing on paper as an action plan for everything that’s happening with the objectives listed. Who’s in what role positions? What is our safety plan for the facility? What is the medical plan if there is a medical emergency?”

Gassaway Baptist, Community Care, Braxton emergency operations, the Braxton County Health Department and Braxton Memorial, which is operated under WVU Medicine, have formed the partnership to make this clinic happen.

There were 62 people working Thursday at Gassaway Baptist: 22 church volunteers, 24 Community Care workers, 10 from Braxton Memorial, three from emergency services and three from the health department.

Crystal Conrad, Braxton Health Department nurse administrator, stepped into this job three weeks ago. The small rural health department, recognizing it needed every bit of the community’s support to run these clinics, reached out to potential community partners to make it happen.

“It’s a community partnership. We could not do this without everybody involved,” Conrad said. “The hospital, Community Care and the church especially — their volunteers have been absolutely incredible.”

Bowling, of Braxton Memorial, said any egos were kicked away early. For community health partnerships, too many of these in one building will cause trouble.

“The key was to sit down and say with your partners ‘who can do what, and who can contribute what?’” Bowling said. “Everybody here does it with love. We’re smiling, we’re happy, we’re just glad to be here.”

“The bottom line is these staff are committed,” Bowling said. “You think it’s easy to sit there and give one shot after another for seven hours? It is not. It is exhausting.”

With the early success of the clinic, the challenge becomes how to finish strong, Collett said. Vaccinating homebound people — especially in the hills and hollers throughout central West Virginia — will be a challenge, she said, but the county is far enough ahead with vaccinating residents at the clinic to start focusing on those people.

This work will continue for who knows how long, Collett said, but the organizations in the partnership are going to do whatever it takes.

“We’re trying to get back to that normalcy,” she said. “We’re not there yet ... but this is what it takes to get there.”

Dittman has been attending services at Gassaway Baptist for nearly 20 years, she said. While some may worry about the stamina of the church volunteers, she doesn’t.

“I can say, as long as they’re needed, they’re going to step up,” Dittman said.

Conrad spoke emotionally about the operation. Braxton County is her home, and she said it’s hard to describe the feeling of watching her community step up and answer the call to service in such a resounding way.

This circle of community partnerships — faith, health care and emergency operations organizations — is one every county or region in the United States is trying to establish, Hoffman said. To see it happening here in the heart of West Virginia, he said, is a testament to their team’s dedication to service.

“It’s kind of like all of the sudden a big, proud moment,” he said. “You just don’t think that you’ll be able to get something this well organized and this smooth in a rural area.”