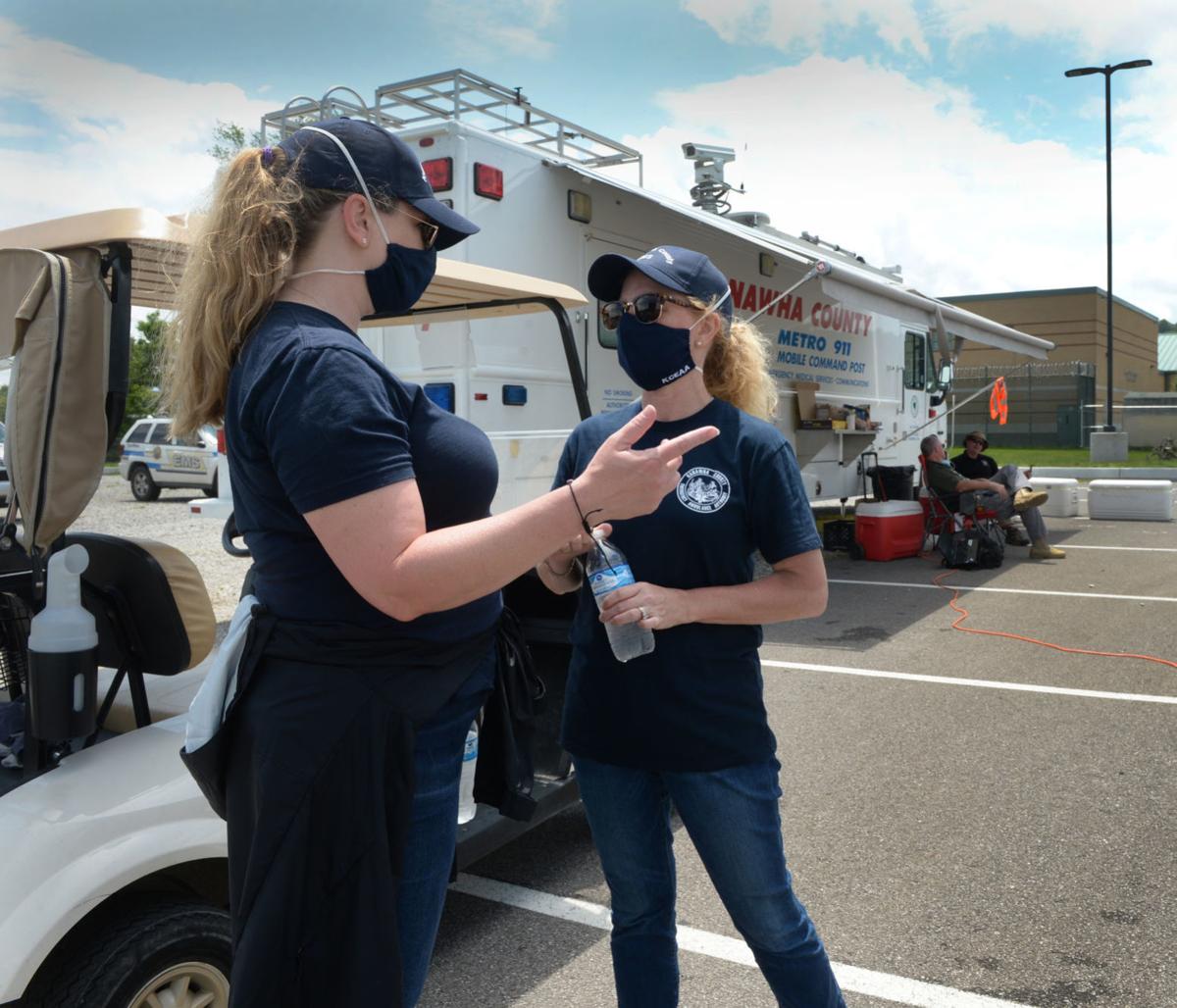 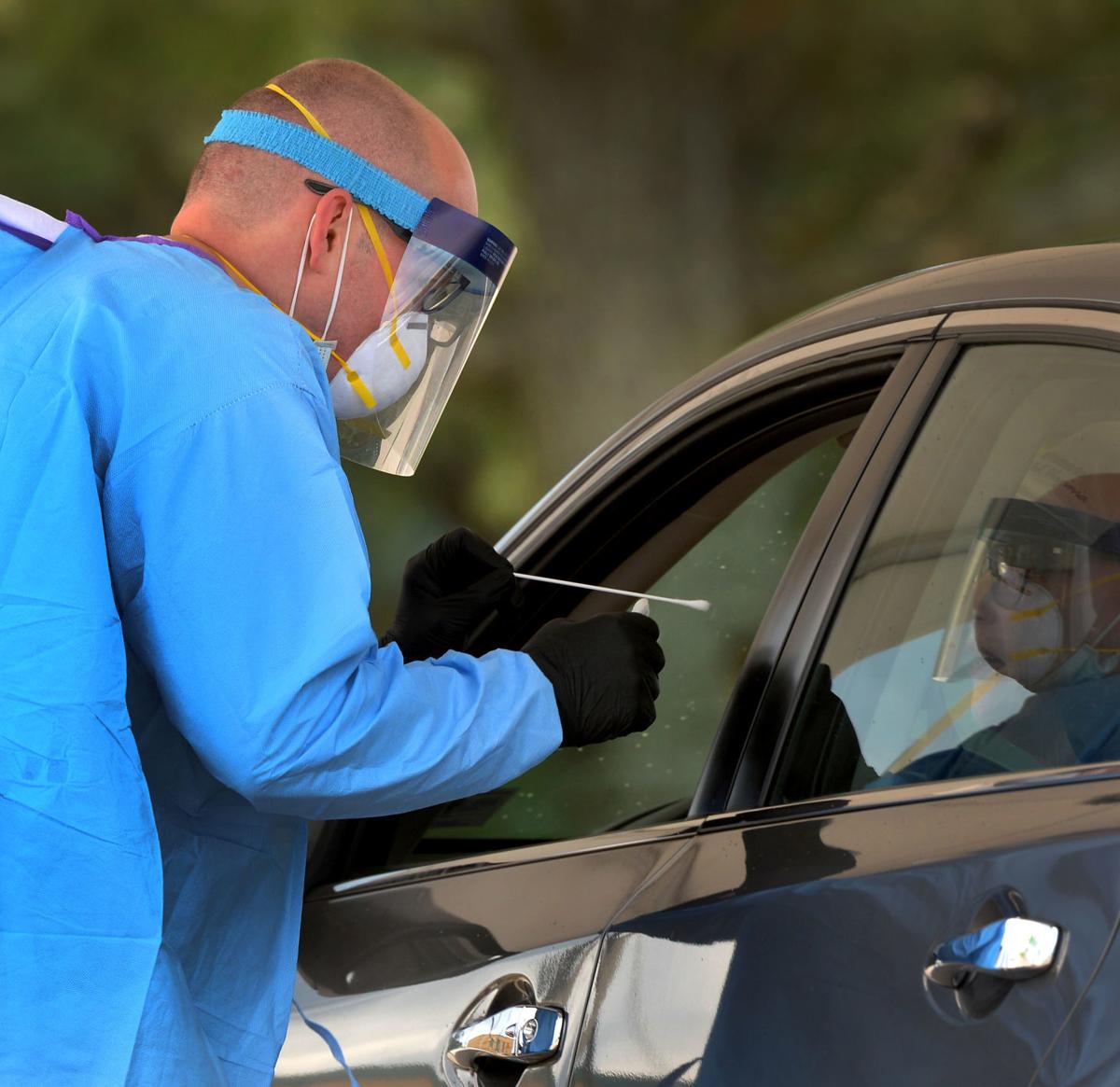 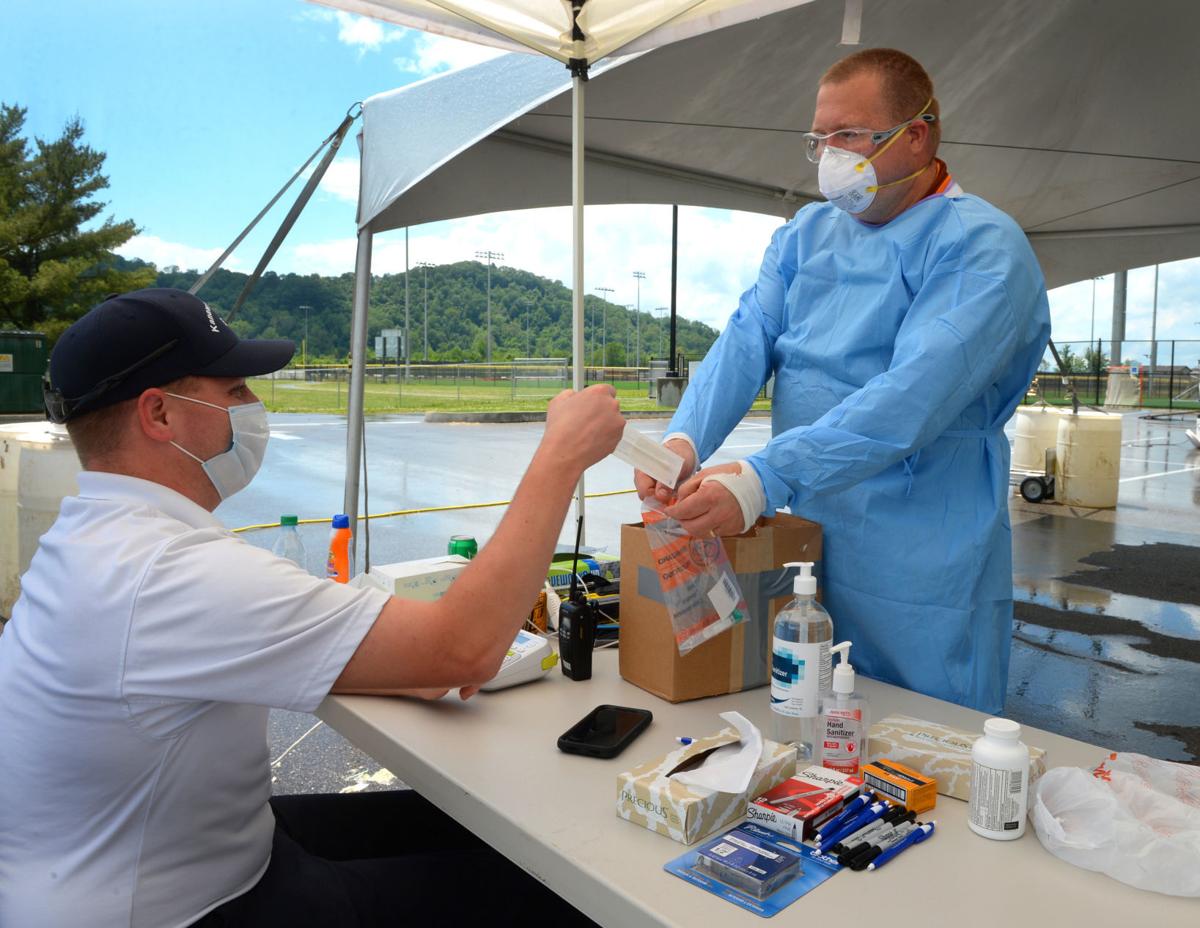 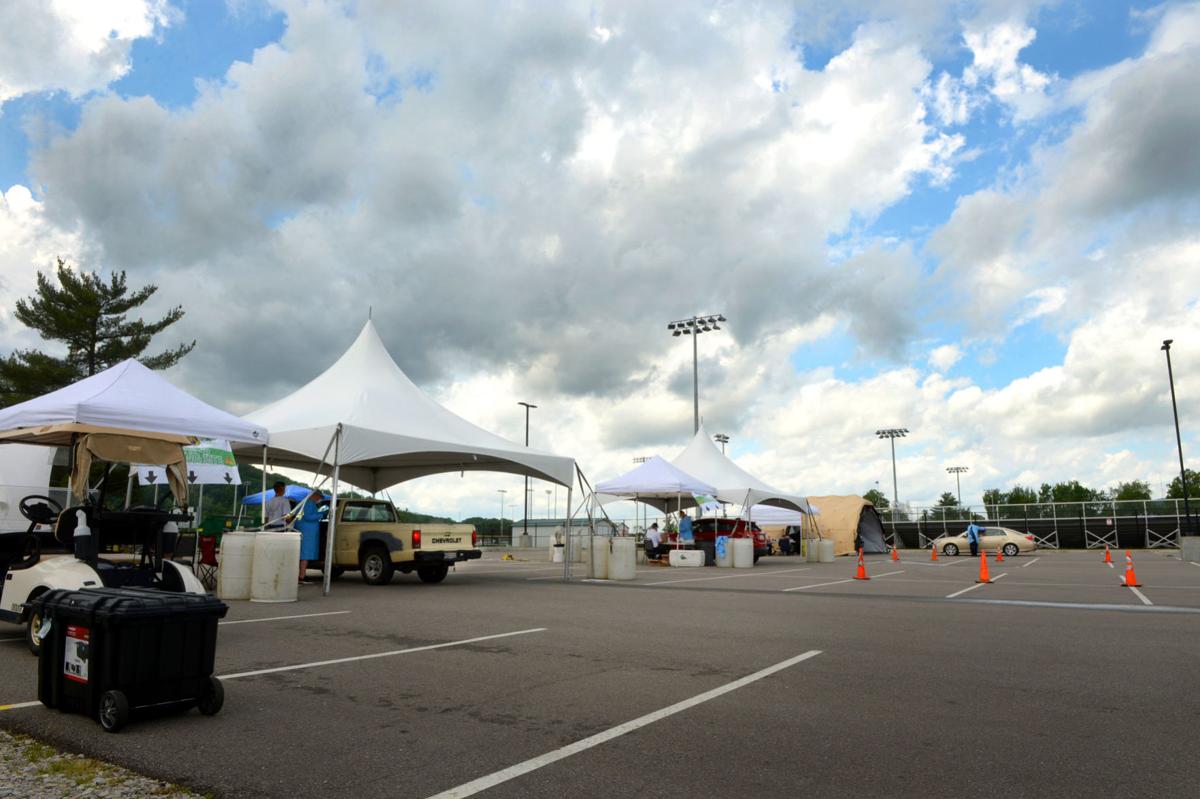 Free drive-thru COVID-19 testing was held at Shawnee Sports Complex on Friday and Saturday for anybody looking to be tested for the virus. The community testing was the 14th one put on by Kanawha County Health Command. 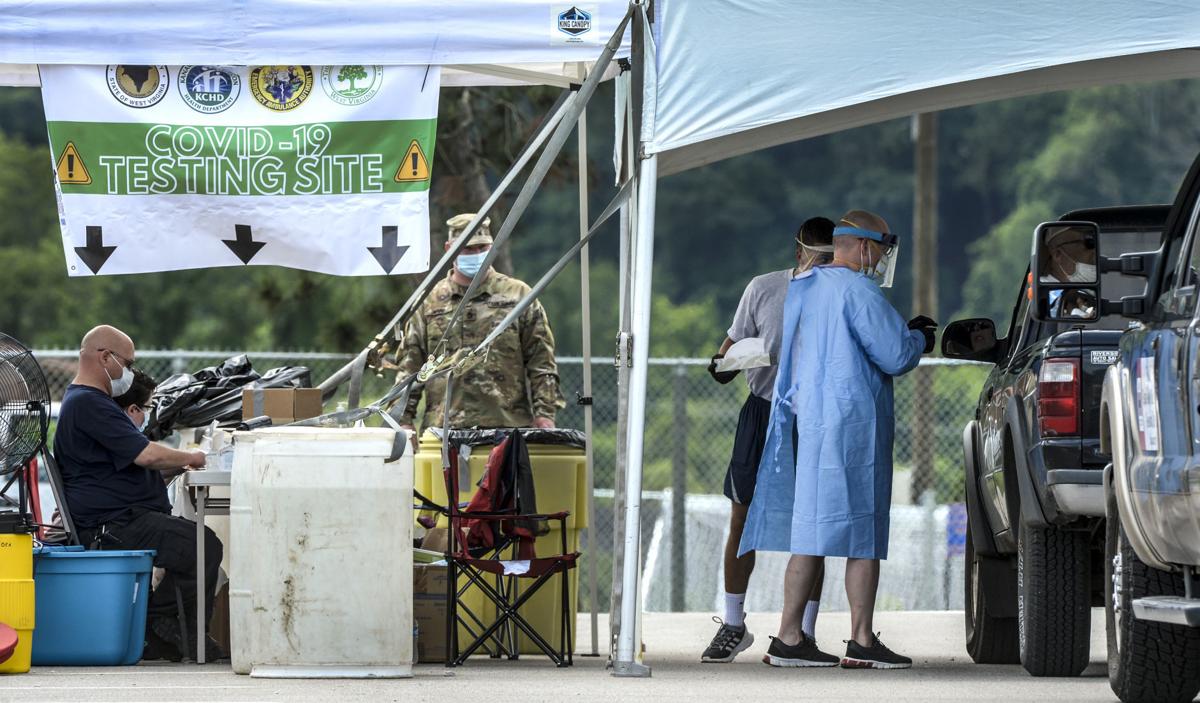 Free drive-thru COVID-19 testing was held at Shawnee Sports Complex on Friday and Saturday for anybody looking to be tested for the virus. The community testing was the 14th one put on by Kanawha County Health Command.

COVID-19 testing no longer is only for those exhibiting symptoms or at high risk of contracting the virus. It’s for anyone and everyone.

“Getting tested right now is a good act. It’s the responsible thing to do. Even if you’re feeling fine, don’t think you have anything going on, it can give people a peace of mind,” said Dr. Sherri Young, health officer at the Kanawha-Charleston Health Department. “Someone may have it and have no idea. If a test can inform them, they can work harder to limit the spread and protect others around them.”

A recent national report showed up to 80% of people who contracted the virus presented few or no symptoms while passing it on to others who were affected differently, according to the World Health Organization. That underscores the need for testing, Dr. Young said.

As of Saturday evening, there were 231 confirmed cases of COVID-19 in Kanawha County, and 18 associated deaths.

Friday’s was the 14th community testing event hosted in the county. It was organized through the Kanawha County Health Command, composed of emergency response groups from across the county.

Limited at the beginning of the pandemic, testing capacity is up statewide. Dr. Young said it’s in everyone’s interest for more people to get tested, especially as health officials learn more about asymptomatic transmission.

“When this started, the virus caught us off guard. It was something we had no knowledge of six months before, and we didn’t know a lot in those first days. We only had a handful of tests and weren’t sure when more would come,” Dr. Young said. “That’s changed. We have enough tests now, and we want to test anyone we can, for their well-being but also for the well-being of our community.”

Over the weekend, the West Virginia National Guard helped with logistics such as directing traffic and filling out paperwork for people getting tested. Crews set up three tents at the back of the parking lot, where doctors, paramedics and other first responders administered nasal swab tests through car windows.

“A lot of people said they were getting one before going back to work,” Albright said. “Others, they had family members who [were positive] or they were taking care of someone who was. It’s different for every person. Some just want a confirmation of yes or no, too.”

Monica Mason, nurse practitioner and director of education for the Kanawha County Emergency Ambulance Authority, has worked through Health Command to organize and host community testing since mid-April. She and others are using lessons learned from each event to imagine different types of testing.

“Tests are different depending on what they are, but we’ve learned a lot by doing these and doing them a lot. It’s locked down, and I do think we’re going to use this moving forward, with the flu, whatever it is,” Mason said.

As the state reopens and people gather in larger groups, Dr. Young said, it’s important that testing is widely available and everyone remember that a negative test is not permanent.

“A negative is negative in that moment. You could test negative but possibly still contract the virus in following days,” she said. “It’s the same if you’re positive or test for antibodies. That result doesn’t mean you’re immune, that you’ll never be at risk for it again.”

Meanwhile, life is returning to normal for first responders, Lt. Young said. In March, emergency calls were down. When crews responded to calls, people frequently declined trips to hospitals because of COVID-19, Lt. Young said.

“People are taking their bikes out, they’re going hiking and enjoying the outdoors. We’re hearing people less nervous about going to a hospital if they need it,” Lt. Young said. “It’s not normal, but it’s what our normal is now considering what’s happening.”

Dr. Young urged people to take precautions even if they test negative.

“Wash your hands, wear your mask whenever you go out if you can. I know some people disagree with that, but I wish they wouldn’t,” Dr. Young said. “Things like this, when you do them, they’re not just about protecting yourself. They’re about protecting others around you too. It’s a form of caring for others.”

I got tested for COVID-19. Here's what the experience was like.

I didn’t feel sick Friday, but I got a COVID-19 test anyway.