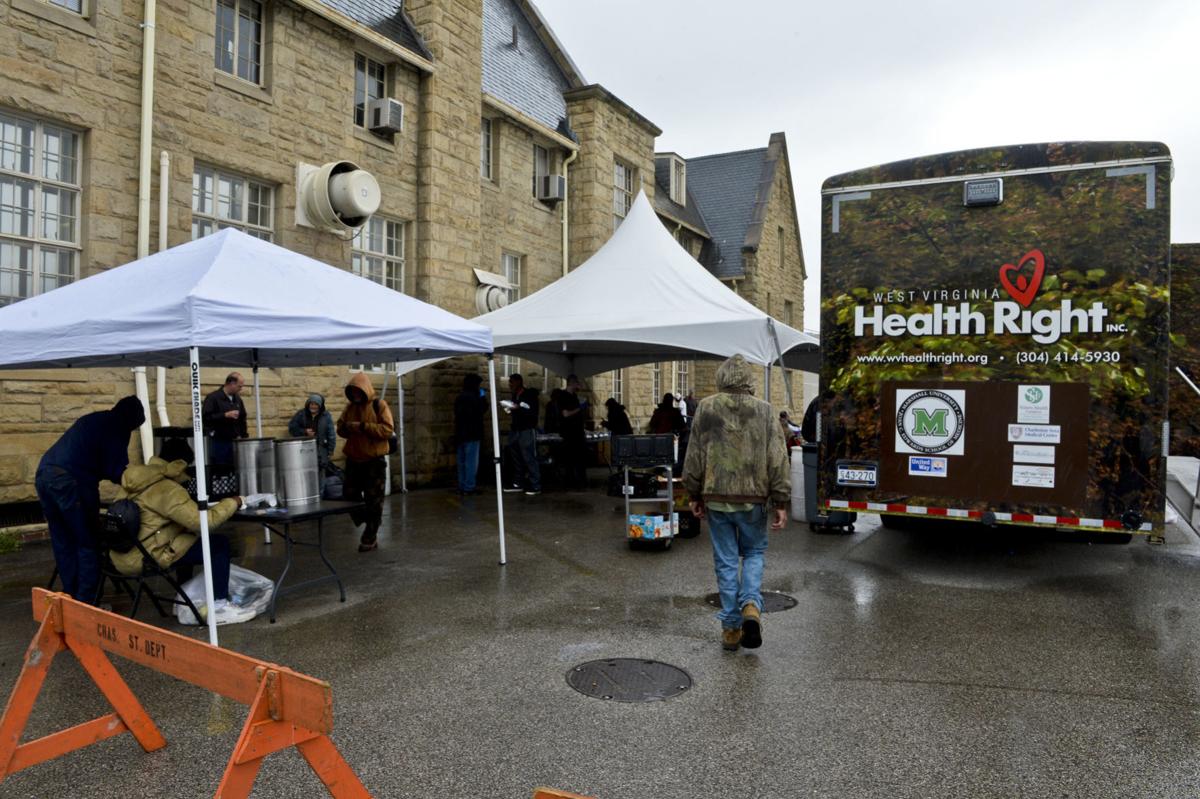 Manna Meal distributes food twice daily in the parking lot outside its cafeteria on Quarrier Street. 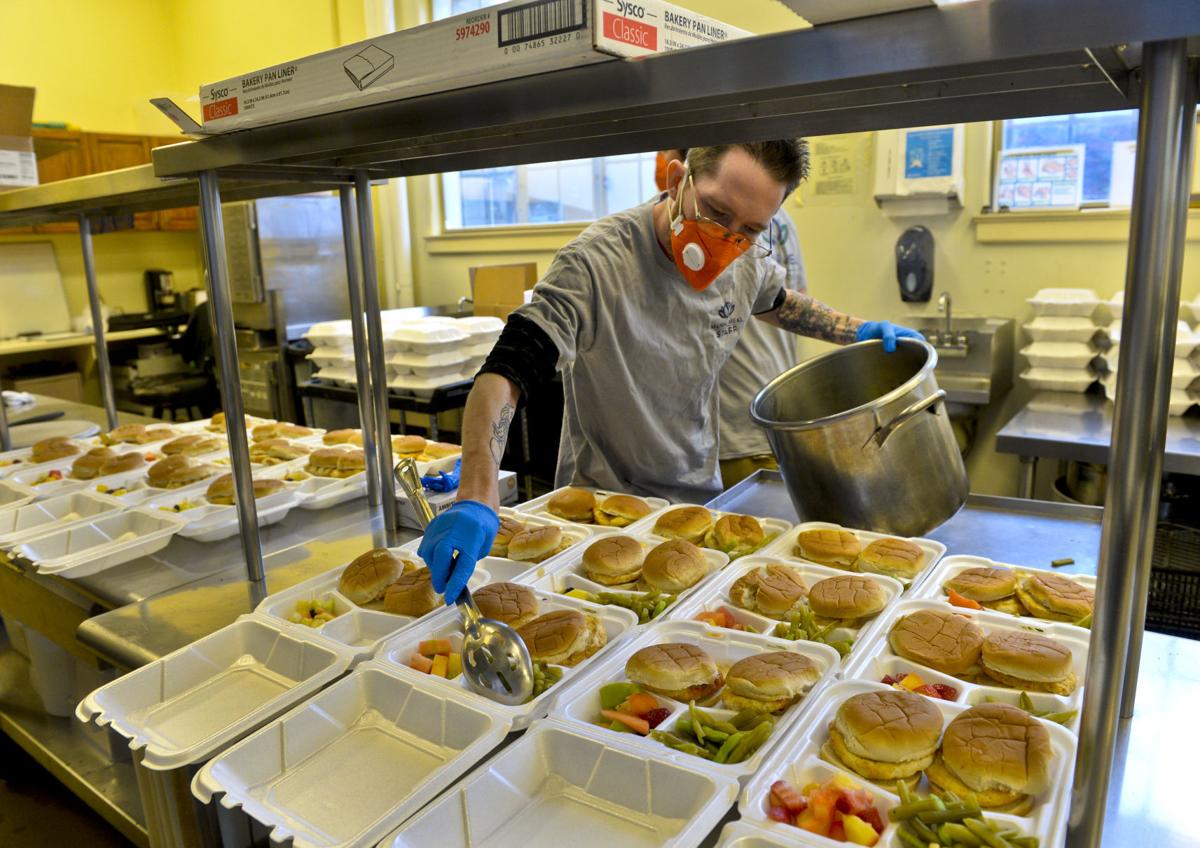 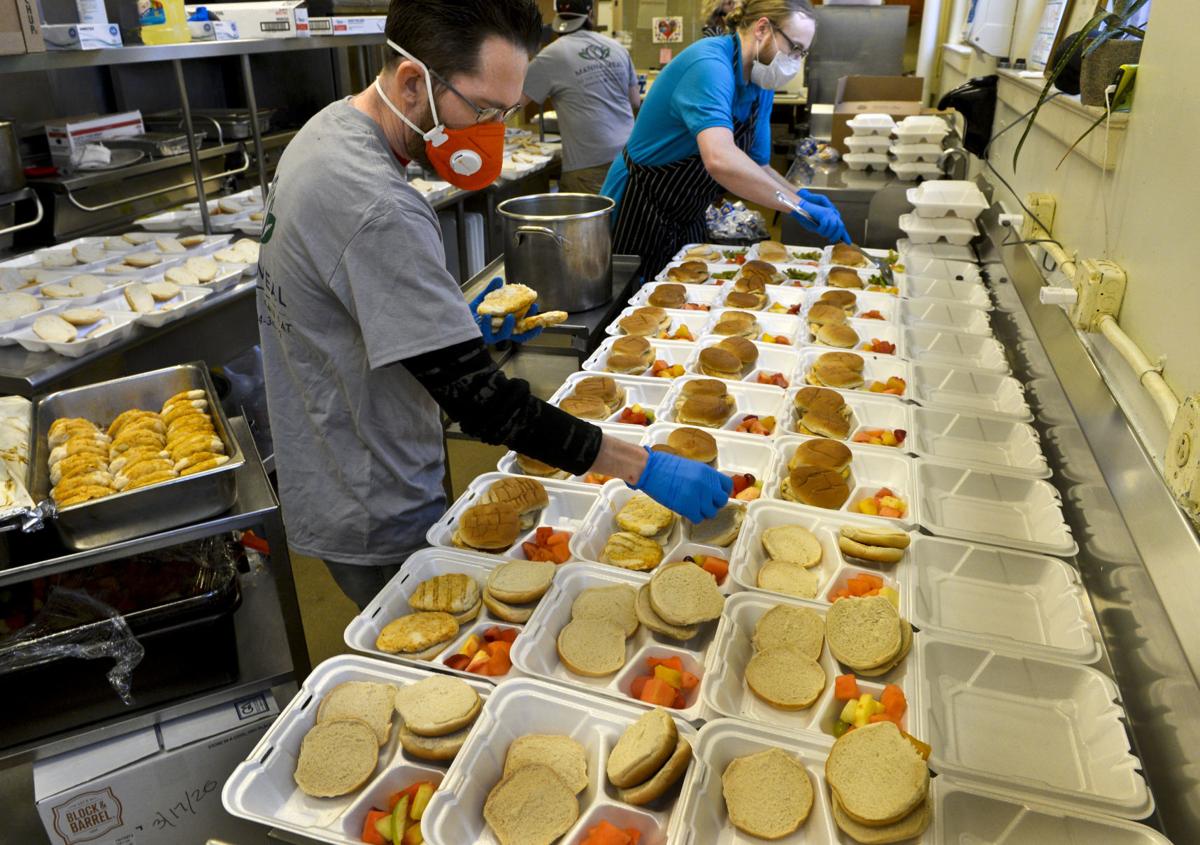 Chris Mooney (left) and Jessee Belcher fill 200 containers with chicken sandwiches, fruit and beans for to-go lunch at Charleston’s Manna Meal kitchen on Thursday. Over the last month the feeding center has seen its number of weekly visitors rise “through the roof” because of COVID-19, according to executive director Amy Wolfe. 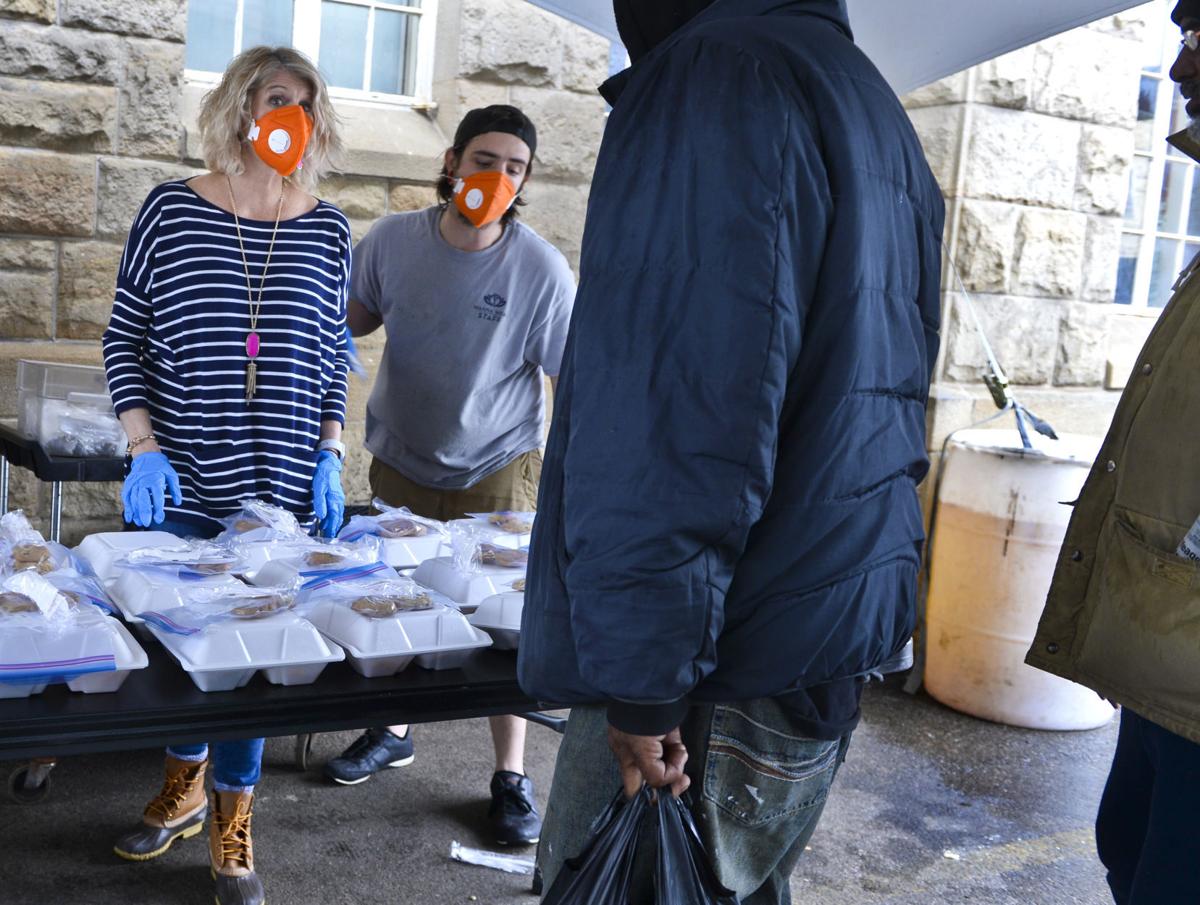 Manna Meal Executive Director Amy Wolfe talks with clients as she hands out food under a tent in the St. John’s Episcopal Church parking lot in downtown Charleston. Since the organization started doing to-go orders last month to comply with safety measures due to the pandemic, Wolfe said the kitchen’s costs have doubled.

Manna Meal distributes food twice daily in the parking lot outside its cafeteria on Quarrier Street.

Chris Mooney (left) and Jessee Belcher fill 200 containers with chicken sandwiches, fruit and beans for to-go lunch at Charleston’s Manna Meal kitchen on Thursday. Over the last month the feeding center has seen its number of weekly visitors rise “through the roof” because of COVID-19, according to executive director Amy Wolfe.

Manna Meal Executive Director Amy Wolfe talks with clients as she hands out food under a tent in the St. John’s Episcopal Church parking lot in downtown Charleston. Since the organization started doing to-go orders last month to comply with safety measures due to the pandemic, Wolfe said the kitchen’s costs have doubled.

Manna Meal, a Charleston feeding center for many in need, has gone 44 years without missing a meal disbursement. Amy Wolfe — who took over as the organization’s executive director in March, just as COVID-19 cases began to rise in West Virginia — is determined to continue the streak.

As more people have lost their jobs in the midst of the coronavirus pandemic and are relying on the organization for food, keeping that streak alive is getting more difficult, Wolfe said.

Two weeks ago, they fed 2,800 people. Last week, it was nearly 3,800. Wolfe said she doesn’t see the numbers dropping off anytime soon.

“Our numbers have gone through the roof, completely,” Wolfe said. “I had to check three times last week to make sure I was right, and there it was. I could not have predicted our numbers. I couldn’t have imagined this.”

Manna Meal is doing meal disbursements at least twice a day, for breakfast and lunch, in the parking lot outside its cafeteria on Quarrier Street. There, visitors wait to receive to-go boxes with whatever is being served that day, and in the crowd — where people are spaced apart for social distancing — Wolfe and her employees are noticing new faces every day.

“The face of the people we’re serving has changed so much,” said Brooke Parker, deputy director for the organization. “We’ve always cared for our most vulnerable, but this is a whole new economic tier of people.”

Among them are people who’ve never been food insecure before, Wolfe said, people who now have no choice but to use services like Manna Meal and food pantries. Employees — including Parker and Wolfe — leave work each day with stories of helping people feel comfortable and safe taking their food.

Last week, Parker said she watched a woman walk around for a while, nearly taking food but deciding not to at the last minute. When she saw her walk toward the parking lot empty-handed, Parker chased her down.

“All she could say is that she worked full-time, she volunteers, she’s, you know, an engaged member of the community and she’s never been in this kind of insecurity,” Parker said.

Parker walked with the woman and talked for a bit, convincing her to come inside to the Covenant House food pantry.

“And then she was sitting there, in tears, getting frozen meats,” Parker said. “She was crying. She’d never needed this before, and she was getting food because she understood for the first time what that felt like.”

A few days later, Wolfe watched a man wait 30 or 40 minutes in his car before working up the nerve to get out and grab a meal.

“Almost daily we have stories like that,” Wolfe said. “When we do, we know it’s our job. We’ve got to reassure them, reassure their fears, their anxiety. Make sure they know they haven’t done anything wrong.”

Parker said that over the past week, she’s heard a lot of people blaming themselves for the situation they’re in.

“They say they should have had more savings, should have an emergency fund, but we’ve got to remind them, whenever we can, that it’s OK. It’s not their fault, and in a lot of ways we’re all in the same boat right now,” Parker said. “There shouldn’t be any shame in that, in helping yourself when you need it.”

Wolfe said she knew the pandemic would lead to more people coming to Manna Meal. Weeks out, they began buying containers and other things they’d need to offer to-go services, as well as more nonperishable food. Now, weeks in, she said can’t reorder things fast enough.

When employees leave the kitchen in the evening, Wolfe said it’s common to see some people waiting outside the doors, checking if there’s any food left.

“And we stay. We’ll make them a sandwich, give them a bag of whatever we haven’t packed up, and make sure they have something to eat,” Wolfe said. “That’s our job, we have to do that, especially now. You don’t know what that person is facing once you leave.”

The organization has adopted other nontraditional ways to meet people where they are. Wolfe said they’re doing occasional deliveries, including providing 75 meals a day to the Roark Sullivan Lifeway Center, a homeless shelter in Charleston.

“We’re getting calls, dozens a day, about the pantry, and calls from people who can’t leave their homes or get here, but who need food. So, we’re figuring out each day how we meet the need,” Wolfe said. “I think our claim to fame is that we’ve adapted, rolled with the changes. If we don’t, our people won’t be served. Some won’t eat.”

But adapting comes at a price. Under normal circumstances, the kitchen would be filled with volunteers each day to help distribute and prep food. Wolfe said because of COVID-19, it’s unsafe to bring in more people than necessary, so they’re relying on their small staff working long hours and doing more with less people. The work, Wolfe said, is more emotionally taxing than ever.

“I get home every day thankful for what I have, grateful. I know they do, too. You can’t do what we do all day, see what we see, and pretend it’s not happening when you get home. It keeps you up,” Wolfe said.

The price is more than just emotional. Materials needed to offer to-go meals are expensive and are a new expense for an organization used to serving clients in its cafeteria with washable plates and utensils. Plus, with more people coming in, more food is needed.

Wolfe said the organization is making it work, and they’re going to continue keeping people fed. But with no end in sight to the pandemic, they could use help. Annual fundraisers, which provide a decent bump in the organization’s funds, have been postponed. There are fewer people able to donate due to pay cuts and job losses.

They’re looking at emergency grants to help keep things running, but those will only sustain the operation for so long, Wolfe said.

“We’re spending double on average, probably a little more, but we’re going to figure it out. We need to figure it out,” Wolfe said. “Our community rallies around Manna Meal. It always has, but under these circumstances, how long does that last?”

Those at the organization are now thinking about how to move forward with the knowledge it could be a long time before the increased need subsides, Wolfe said.

“If we [as a state] begin opening back up, it’s going to be a slow roll-out. Even if restaurants open back up, they’re not going to need as many staff members. Some people are going to be out of work for a while,” Wolfe said. “We’re definitely looking at ways to stretch our dollars. We’re hoping the immediate crisis doesn’t last too much longer, but the effects of it certainly are going to be around for months more.”

Parker said she hopes, on the other side of COVID-19, there’s more of an effort from everyone to understand what it feels like to be food insecure. She said she hopes that in the future, with so many more people now struggling, there’s less of a stigma about using services like food pantries and soup kitchens.

“The gaps aren’t as large as people would like to think,” she said. “A lot of people probably thought, before this, they were never going to be in jeopardy like that, but now they are. I don’t think we ever go back after this. Awareness is rising about the line people are living on. I think this could change things forever.”