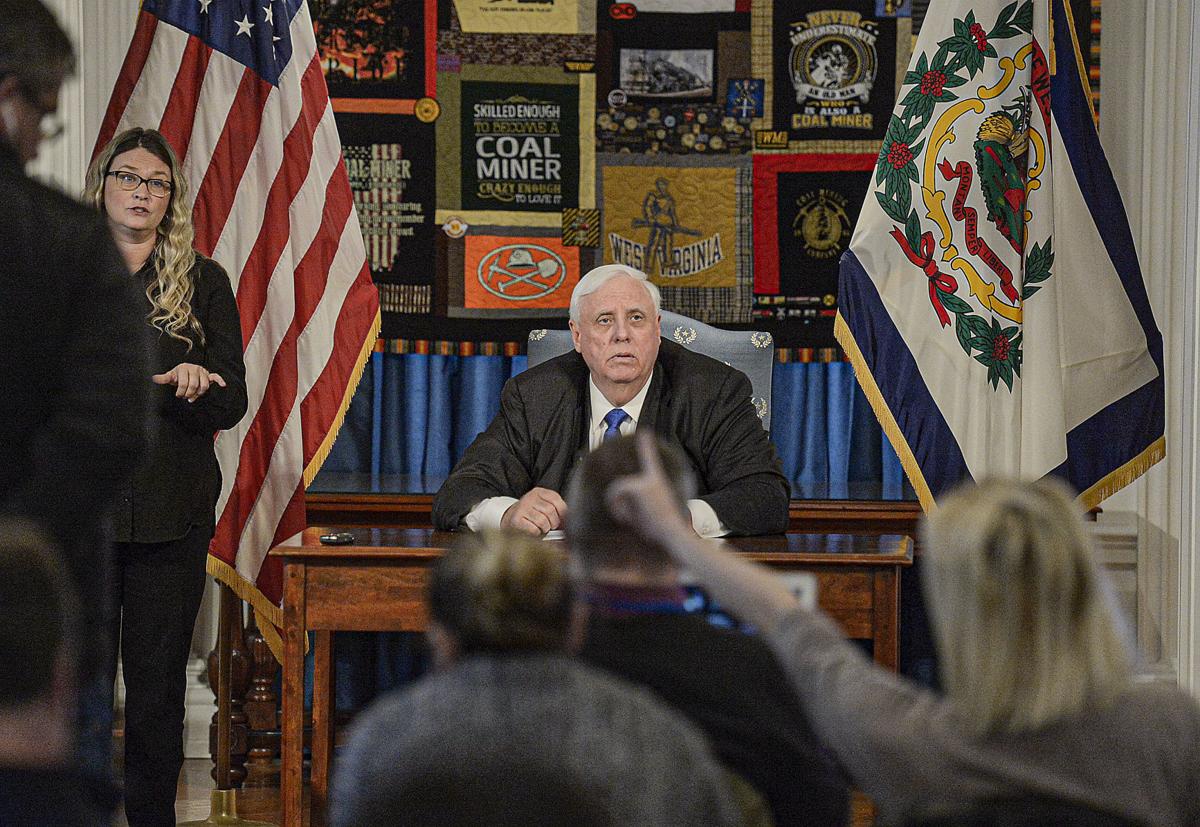 Gov. Jim Justice gives an update of how West Virginia’s government is dealing with the COVID-19 pandemic at the Capitol, in Charleston, on Monday. 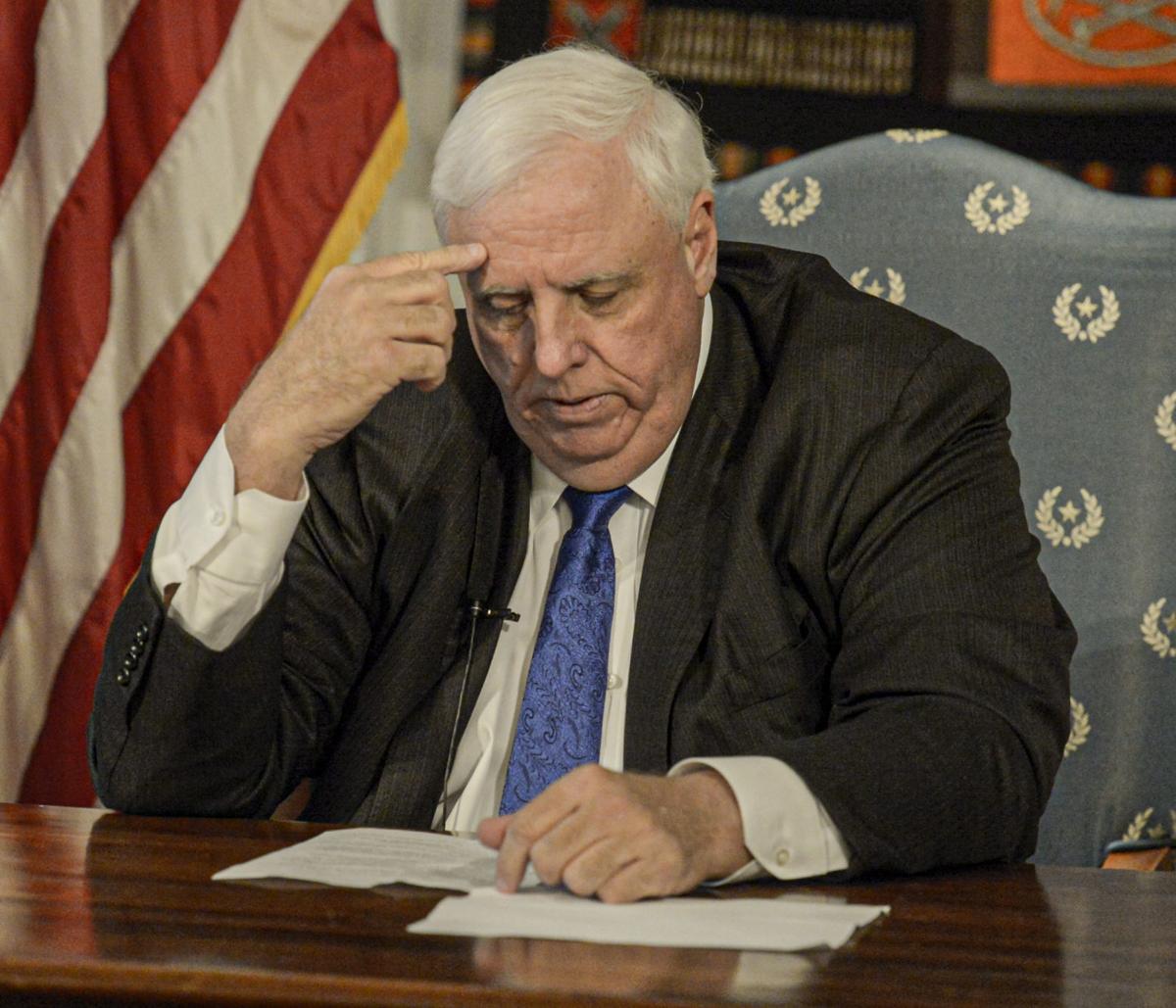 Gov. Jim Justice held a news conference Monday at the State Capitol in Charleston. The governor addressed what the state was planning in relation to the COVID-19 Pandemic.

Gov. Jim Justice gives an update of how West Virginia’s government is dealing with the COVID-19 pandemic at the Capitol, in Charleston, on Monday.

Gov. Jim Justice held a news conference Monday at the State Capitol in Charleston. The governor addressed what the state was planning in relation to the COVID-19 Pandemic.

Three days before Gov. Jim Justice declared a state of emergency in response to COVID-19, Warner said last week he was ready to take action to make sure the 2020 election cycle is as accessible and safe as possible, within the scope of the law.

As of Monday, there were 57 days left until the state’s May 12 Primary Election, well into the window in which the 1.2 million registered voters in West Virginia may apply for absentee ballots.

On Friday, Warner said his office had made many of its business and election resources available online but that there isn’t much wiggle room in the law when it comes to executing an election during a public health crisis.

“Our current laws right now make it difficult to work with a pandemic-type situation where people are afraid of going to the polls,” Warner said. “Poll workers may be afraid of working at polls and so forth, and that’s the experience we’re hearing about in other states.”

Preparing for the first case

West Virginia is the last state in the nation to still have no confirmed cases of the coronavirus. As of Monday evening, 84 residents had been tested, with 80 of those negative and four still pending, according to the state Department of Health and Human Resources.

“This virus is, without question, in West Virginia somewhere right now,” Justice said at a news conference Monday afternoon. “We’re trying to be ready in every way we possibly can be. Let’s not get caught, then say, ‘Oh no.’ Let’s err on the safe side.”

At the governor’s news conference, Health Officer Dr. Cathy Slemp said West Virginia would not be operating any differently today, even if there were confirmed cases of the coronavirus.

Many have criticized the government for its limited testing. Slemp said this is a problem nationwide, and West Virginia’s struggles to test are no different than surrounding states, where cases have been confirmed.

Slemp said West Virginia has the capacity to run 500 tests for the coronavirus. While testing was initially reserved for those who had traveled to places with wider spread of the disease, the government is now focusing on testing its more vulnerable residents — such as the elderly and people in hospitals — and those who believe they’ve been in contact with someone infected, not just from travel.

Commercial lab service LabCorp is verified to run COVID-19 tests in the state for those who request it, but Slemp said only a handful, “maybe five,” tests have been run here by the company.

Slemp said she hopes to see more testing coming online soon but that, right now, health officials need to focus on the best use of limited resources.

“Our focus is not on the number of cases, it’s on the risk of the individual,” Slemp said. “We need to do the best with what we have [for testing]. The other parts of this — we need to be prepared, as we have been, to try and prevent what we can.”

Justice said declaring a state of emergency was part of this preparation. At this time, the declaration will not affect day-to-day operations, he said. Instead, it will allow state leaders, such as Cabinet secretaries, more leeway in how they conduct office business.

A pandemic and an election

Secretaries of state throughout the country are communicating daily about what sort of steps they’re taking to keep voters and poll workers safe and encourage voter turnout, Warner said.

So far, at least two states have delayed their primary elections because of coronavirus. On Friday, Louisiana moved its April 4 primary election to June 20. Georgia’s primary election, originally set for March 24, now is scheduled to take place May 19.

“I am not a proponent of delaying the election,” Warner said Friday. “Depending on how bad the situation gets, we may have to look at those options as well.”

Donald Kersey, general counsel for Warner’s office, said Monday he was waiting on advice from Attorney General Patrick Morrisey’s Office as to how broad the Secretary of State’s rule-making authority was in this situation.

“We just don’t know how far that authority goes because it’s never been tested before, and we want to make sure we’re doing everything by the book,” Kersey said Monday.

Beyond the Attorney General’s Office, Warner said he also had been in touch with officials from the Department of Health and Human Resources about keeping polling places clean and with other state resources to determine if alternate polling places would need to be established, depending on how and where the coronavirus appears in West Virginia.

Warner said Friday he didn’t really have any good options. One was the state of emergency, which Warner said would be a tough sell given that he and Justice are up for re-election this year.

The other option was a special legislative session that would’ve put legislators at their own public health risk, and it would’ve cost more money.

“There is no perfect solution here,” Warner said. “We’re wanting input from as many people as possible to achieve the best solutions and the best buy-in from the voters, so people aren’t questioning the legitimacy of the elections after the ballots are counted.”

Instead of changing the primary election date, Warner hoped he’d be able to relax the requirements for absentee voting.

He said his goal would be to allow more people to vote absentee and make it so fewer people were congregated at polling places. Warner also said the early voting period could be extended to give people more time to vote in hopefully less crowded spaces.

Even Warner’s preferred plans of action have their drawbacks, he said.

Expanding absentee voting could mean expanding the canvassing and election certification period after the election.

“One thing I would like to encourage is for people not to expect that instantaneous result on election night the way we’ve kind of grown accustomed to because if we increase absentee ballot options for people, it may take the clerks longer to count the ballots,” Warner said.

Warner reiterated that even if it takes longer to get election results, he wants it to be because of a high voter turnout and a clear method to make sure the election is fair.

“I would highly encourage everybody to participate in the elections because that’s how democracies work best,” Warner said. “The more people who participate, the more confidence we have in the outcome of the election and the people that the majority of the folks wanted were elected to office. If you have low voter turnout, you have people questioning, was that the best candidate, was that what the majority of the people wanted?”