West Virginia State University hosted a graduation ceremony on Zoom. While a handful of WVSU leaders stood in an empty auditorium, graduates were seen on screen turning their tassels from right to left to signify their accomplishment. 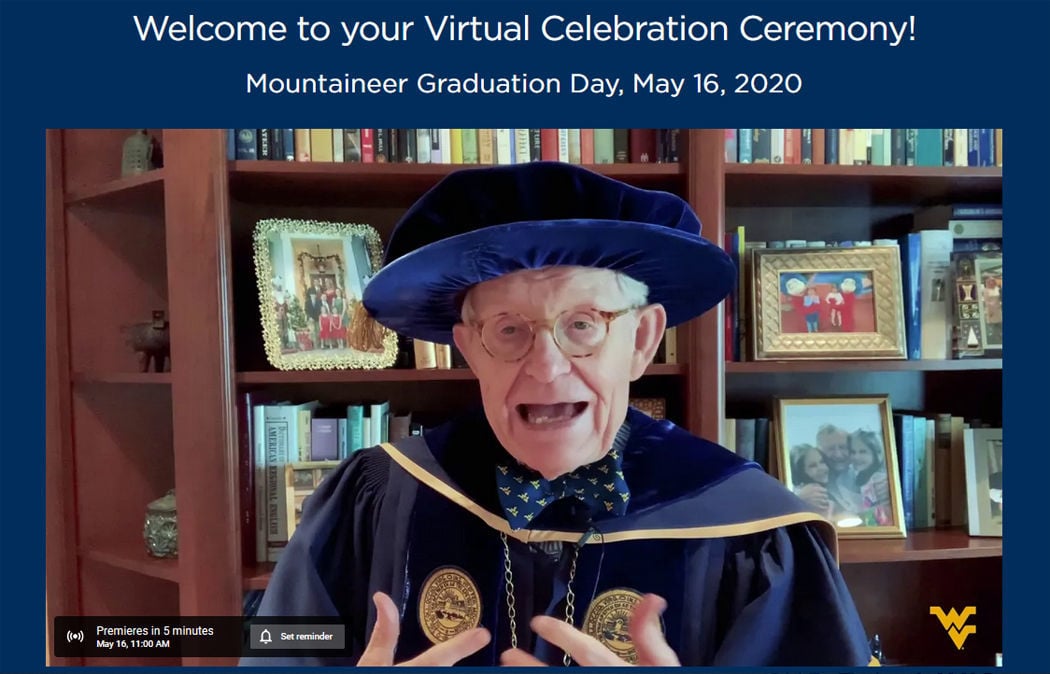 West Virginia University President Gordon Gee spoke during the university's virtual graduation and told the students he missed them. He also awarded an honorary degree to country music star and West Virginia native Brad Paisley, who began a rendition of John Denver's "Country Roads" followed in song by other state and university notables.

West Virginia State University hosted a graduation ceremony on Zoom. While a handful of WVSU leaders stood in an empty auditorium, graduates were seen on screen turning their tassels from right to left to signify their accomplishment.

West Virginia University President Gordon Gee spoke during the university's virtual graduation and told the students he missed them. He also awarded an honorary degree to country music star and West Virginia native Brad Paisley, who began a rendition of John Denver's "Country Roads" followed in song by other state and university notables.

The University of Charleston’s seal and “Commencement Spring 2020” were displayed over flyover videos of the school’s campus along the Kanawha River.

Uplifting music played as the campus, which most students hadn’t been on since March, shone in the daylight and at sunset.

“Glad I didn’t have to put pants on for this,” a user named Exo wrote in the YouTube video comments section, as others congratulated family members with emojis of graduation caps, hearts, confetti and balloons.

This was college graduation in the midst of the coronavirus pandemic of 2020, when gatherings are forbidden and everything you’re wearing other than a cap and gown has been a running gag.

Other traditions have persevered nonetheless.

At West Virginia University’s graduation on May 16, “Pomp” was just discernible under the voice of a narrator announcing that this unusual broadcast was the school’s 150th commencement ceremony.

University President Gordon Gee “handed” country music star Brad Paisley an honorary degree by pushing the plaque off his own screen before Paisley pulled it onto his own in Nashville.

At the ceremony’s end, Paisley started strumming and singing the John Denver tune, before others in separate videos took up verses.

“Let’s see if you know the words to this,” said Paisley, a Glen Dale native. “You have to, if you want to graduate.”

Football coach Neal Brown and family had the unenviable task of immediately following the Grammy winner.

He was a bit off key, but he wasn’t the only one as the song passed on to both our U.S. senators, actress Jennifer Garner and others — including those who hit every note in videos from Istanbul and London.

Unlike others in West Virginia, WVU’s presentation didn’t read off the names of its comparatively whopping roughly 4,500 graduates. The colleges and schools within the university normally would have divided those students among multiple ceremonies.

“I cannot tell you how much I miss all of you,” Gee told graduates. “As you continue traveling toward your dreams in the years ahead, you will understand better than any class before that journeys can make shocking and unexpected detours.

“In confusing times, sticking to a routine keeps your life under control. So do not spend our remaining lockdown period in your pajamas eating seven meals a day like a hobbit,” admonished the president, who this time referenced a classic as part of his tradition of pop-culture references.

West Virginia State University followed its “Pomp and Circumstance” on Wednesday with the national anthem played over a CGI flag.

But WVSU braved a risk that UC and WVU didn’t: The Institute school did much of its ceremony live.

WVSU, despite the threat of Zoombombing sabotage that hasn’t spared Kanawha County, showed viewers live Zoom videos of graduates watching from home. Family and friends got to see them move their cap tassels from right to left, signifying their accomplishment.

A handful of WVSU leaders stood onstage in an auditorium, facing rows of empty seats and a screen that showed these students’ videos.

But the students’ audio was off, so the only people who could applaud the speakers were the few in that room.

“Thank you, everyone, for the roaring applause,” WVSU student body President Colleen Miller joked. “This will be a perfect opportunity to tell your kids ‘No, I really did graduate college in my pajamas.’ ”

She noted that many Class of 2020 graduates entered WVSU at a tense time four years ago: amid the 2016 election.

“Now, in the greatest time of uncertainty in our country, we are receiving our diplomas and entering the workforce,” she said. “Some of our plans have been altered, and some of them, like mine, have been completely halted by COVID-19. But I’ll be the first to say that things will be OK. Better days are coming.”

Outgoing President Anthony Jenkins, a skilled speaker, gave a live final send-off to the Yellow Jackets and took a photo of himself with the screen of students.

For UC’s graduation, “Pomp and Circumstance” was followed by a speech from UC President Marty Roth — himself, at least, in cap and gown.

“While a bit awkward, it’s sort of fitting that things are coming full circle and I’m ending this journey with a virtual commencement speech,” Schiotis said, sitting in a rumpled gown with his tassel hanging in front of the screen.

“It’s hard not getting the chance to say goodbye and thank you in person,” he said, “but I hope you all realize the roles you’ve played in my many accomplishments and in my future goals as a pharmacist.”

He urged his fellow graduates to likewise thank those who helped them, noting that “life is short, and these things shouldn’t go unsaid.”

A fellow pharmacy student, Nneoma Cynthia Imo, died this year, Schiotis said. When a classmate helped her family pack up her apartment, they saw that she had written on the whiteboard: “I did my best, and my best was enough.”

“There’s not a member of the pharmacy school that would disagree with the fact that Nneoma did exactly that,” Schiotis said. “We don’t have to be the best at everything we do, but we should put every ounce of being into the things that we want to accomplish.”

After Schiotis finished, the long reading of graduates’ names began. Afterward, Roth announced, officially, that UC had conferred the degrees onto all of them.

But Roth also conferred a promise to those for whom the YouTube graduation wasn’t enough: an opportunity to walk in December and a congratulatory American gesture people have gone months without.

“I really look forward to shaking your hand as you walk proudly across our stage,” he said.