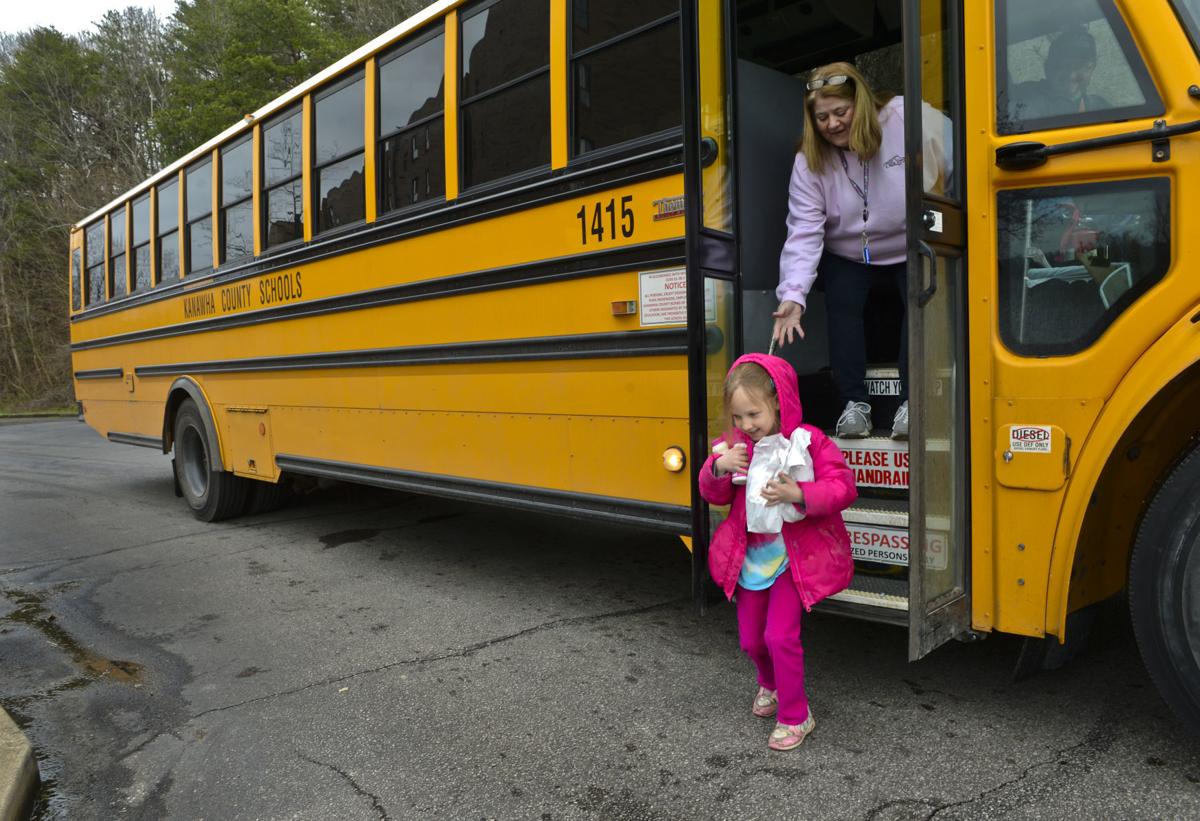 Amira Sexton, 6, of Charleston skips back to her mother, Nikki, after picking up a breakfast and a lunch delivered Monday by Kanawha County Schools bus driver Rob Rider and bus aide Rosemary Light. 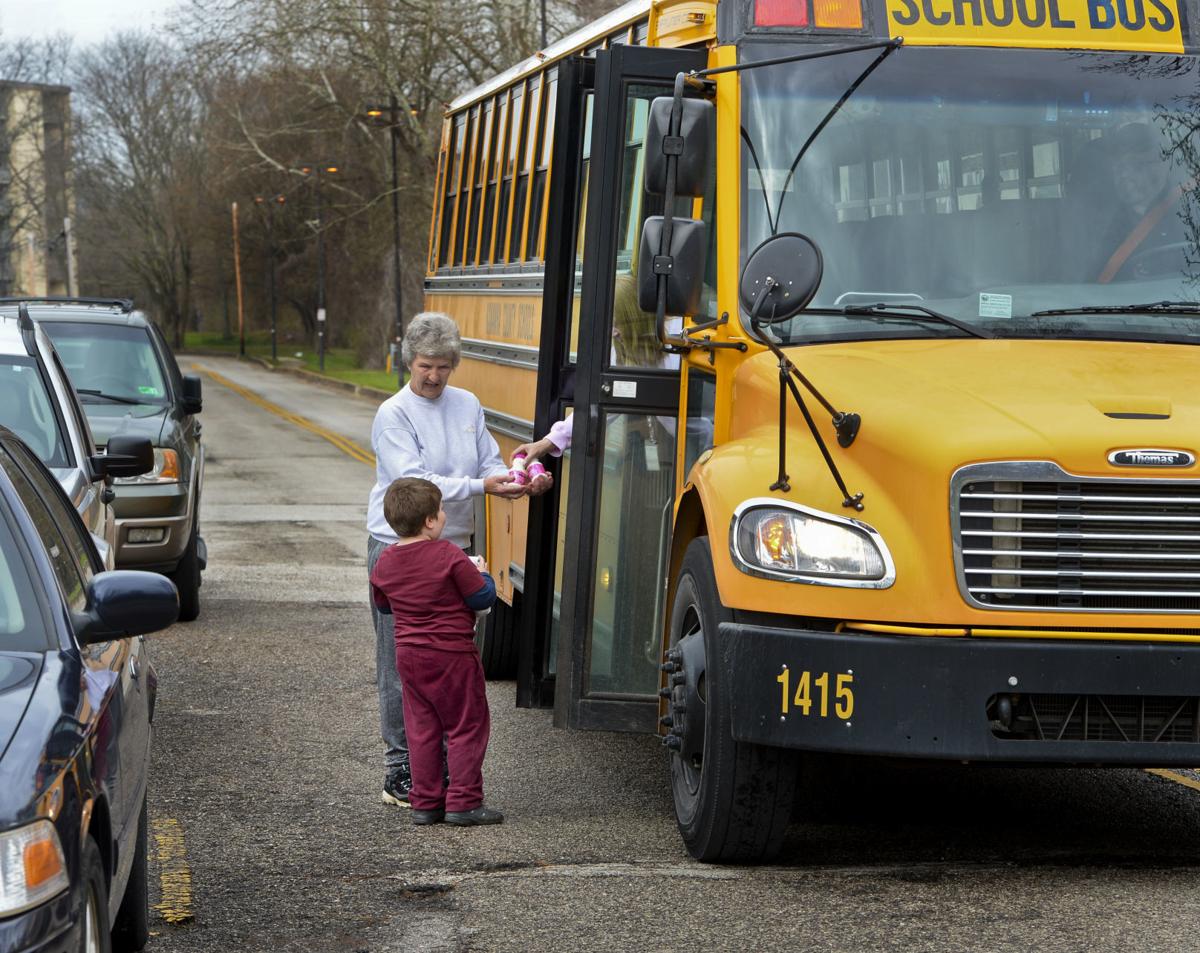 Five-year-old Jacob Sands and his grandmother, Deborah Sands, pick up his school breakfast and lunch Monday. 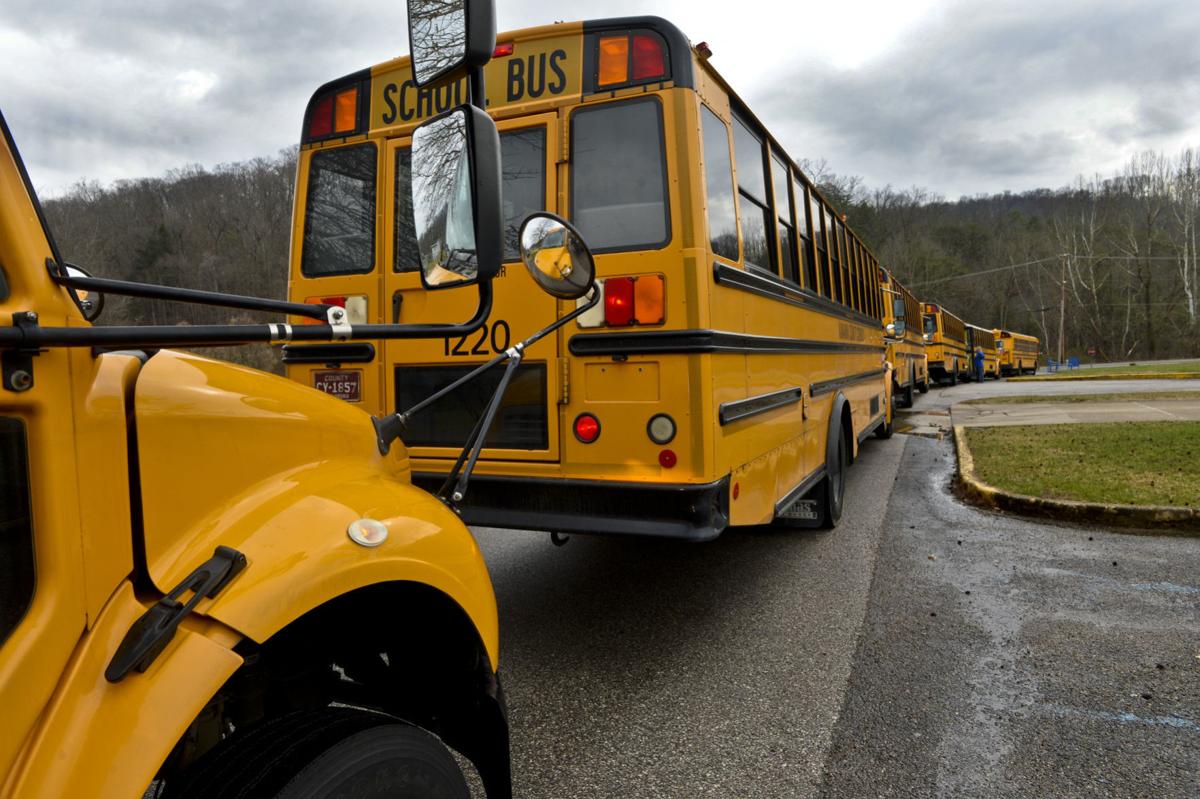 School buses line up at Capital High Monday morning, picking up breakfast and lunch to deliver to school children around Kanawha County.

Amira Sexton, 6, of Charleston skips back to her mother, Nikki, after picking up a breakfast and a lunch delivered Monday by Kanawha County Schools bus driver Rob Rider and bus aide Rosemary Light.

Five-year-old Jacob Sands and his grandmother, Deborah Sands, pick up his school breakfast and lunch Monday.

School buses line up at Capital High Monday morning, picking up breakfast and lunch to deliver to school children around Kanawha County.

The word: Kanawha County buses are delivering free meals to kids while schools are closed over the coronavirus outbreak.

Officials are hopeful it’s a way to feed children without having them bunch up as much as they would in a school cafeteria or soup kitchen. The White House Monday recommended gatherings not exceed 10 people.

The school bus, driven by Rob Rider, trundled Monday morning around the Capitol Complex, behind Laidley Field, up and down hills, through Charleston’s East End and down to Washington Manor, near the West Side.

Instead of students, its jostling cargo consisted of Light, two journalists and boxes and coolers of breakfasts, lunches and milk bottles. Light, who normally ensures preschoolers are buckled in on the bus, repeatedly moved a box of food back onto the middle of the seat as the bus made its bumpy, circuitous journey.

About 20 of the state’s 55 counties began delivering meals via buses Monday, or will start doing so later this week, according to a new state Department of Education webpage, and more are mulling the option.

The webpage, wvde.us/covid19/feeding -site-information, shows all counties that are offering free food in some manner, mostly through allowing parents to pick up meals at schools or other locations.

Kanawha, West Virginia’s most populous school system, is doing that at every school, plus delivering meals to students and parents at every bus stop, spokeswoman Briana Warner said.

Gov. Jim Justice ordered all West Virginia schools closed starting Monday and continuing at least through March 27 to contain the spread of the coronavirus, which causes COVID-19.

The word about the meal deliveries seemed to need spreading in Kanawha on Monday. Light recorded serving only about a dozen students on a bus route that included a public housing project and Piedmont Elementary, a high-poverty school.

The bus returned to the Capital High School nexus, where the food was previously prepared and loaded onto buses, laden with most of the meals it started out with. Other drivers reported over Rider’s radio that they also had many meals left.

“Seventy-two!” Light said, referring to a driver reporting the number of meals left on another returning bus.

As she examined another cooler, Tammy Fisher, a cook who helped unload the food that was returned to Capital, said; “What are we going to do with all this?”

But none of the many meals or milk bottles returned to Capital went to waste, cafeteria manager Brenda Morris said. She tested the temperature of the perishable items while other cooks checked the milk expiration dates, clearing all the leftovers to be refrigerated for another day.

The saved food could reduce the workload for the cooks. Amanda Shumaker, a cook who normally works at Capital, said cooks from Capital and all the elementary and middle schools that send students to it started their day preparing meals and strategizing at 5:30 a.m.

Morris said they churned out more than 1,100 breakfasts and 1,100 lunches. Buses Monday delivered lunches for that day and breakfasts for the next.

Even if a pandemic weren’t sweeping the nation and closing schools in more than two-thirds of the 50 states, Piedmont would be closed now anyway, Rider noted, so students wouldn’t be used to getting school meals at this time. It’s the state’s last “year-round-calendar” school, so its students are on one of the extended breaks they get in lieu of a normal-length summer break.

And, in perhaps a first-day hiccup or an attempt to be as thorough as possible in feeding children, the bus passed a couple other buses taking the same route.

The breakfast bags in Rider’s bus contained either Pop-Tarts and an apple or a cereal carton, Nutri-Grain bar and an orange. The lunch bags had sandwiches, chips and apples. Every meal came with milk.

“Breakfast, lunch, two milks,” Light repeated to herself to remember.

Kanawha announced over the weekend that it was adding the bus deliveries, which weren’t part of the feeding plan it had announced Friday afternoon. It released the original plan after Justice’s abrupt announcement that schools would shut down.

On Monday, atop the normal Piedmont route Rider and Light take together, they headed up the hill to the Vista View Apartments, formerly the Spring Hill Apartments.

“I don’t see no kids,” Rider said outside the tan brick high-rise at the complex’s entrance.

But a bit farther back into the complex, a mother and daughter were waiting on the sidewalk. Amira Sexton, 6, wore a pink jacket, pink pants and pink shoes on the overcast day, and Light handed her pink-labeled milk bottles.

Her mother, Nikki, said she found out about the service through an online communication from the school system, but a couple family members also made sure she knew.

“I think it’s a really good idea that they’re doing this, because having kids stay home full time is much harder, not just on activities and medicine if they are, in fact, sick, but especially if they’re hitting a growth spurt,” Nikki said. “My two girls can eat like three grown men some days.”

Exiting the complex, three women had emerged from the building to request food for their children.

“Spread the word,” Light told them.

Gov. Jim Justice and the state Department of Education announced yet more changes to the planned statewide school closures that are meant to h…