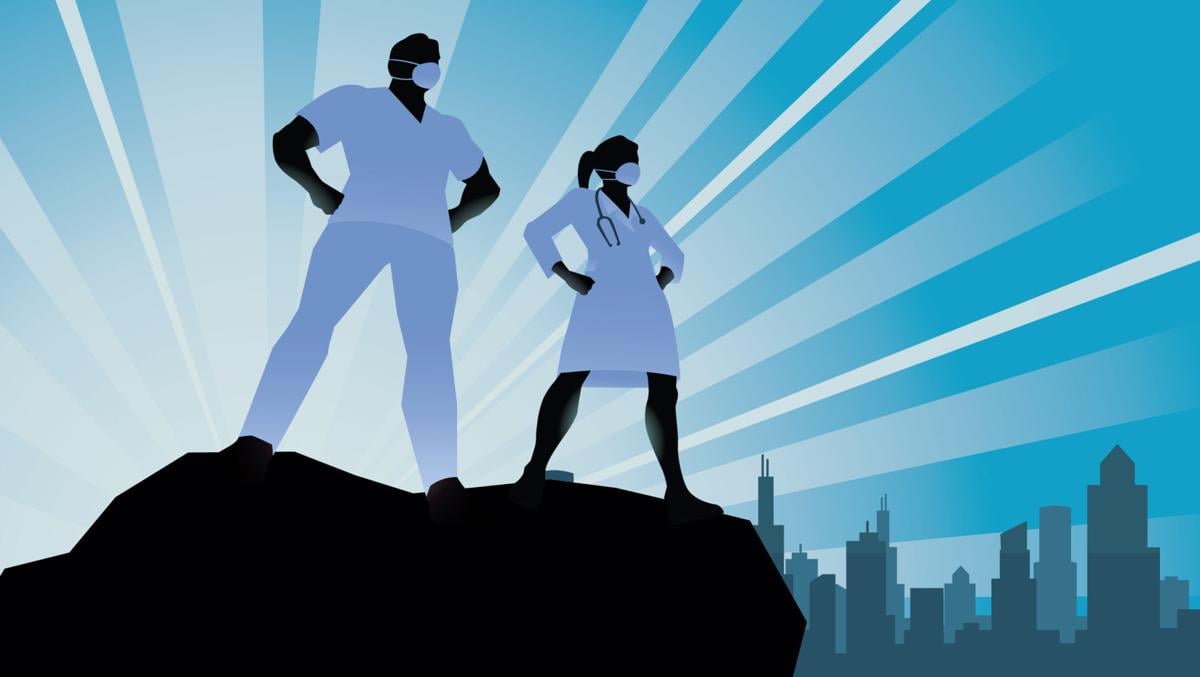 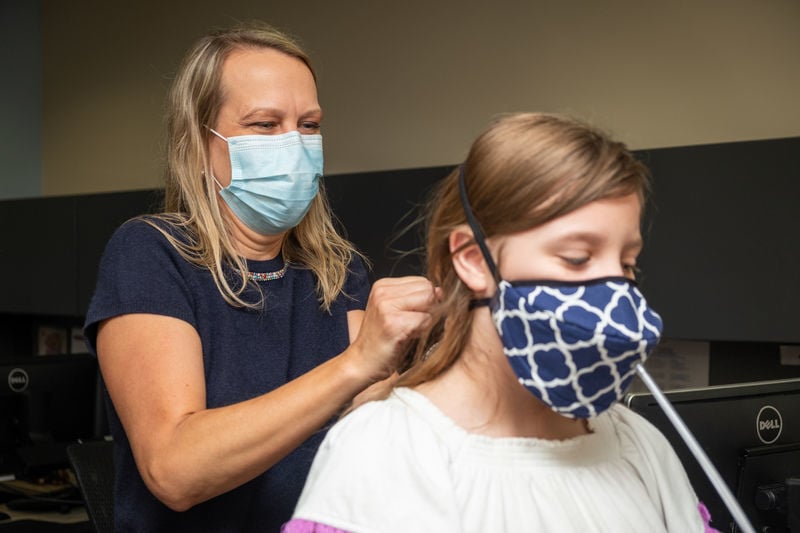 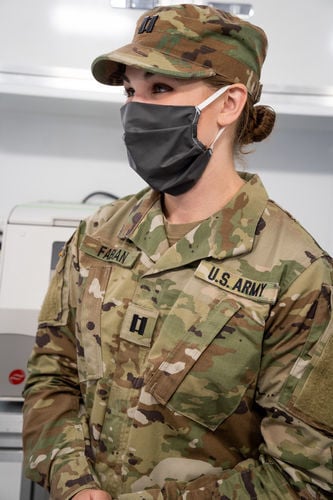 West Virginia University alumna Samantha Fabian is a captain in the West Virginia National Guard and program director for the COVID-19 mobile testing laboratories based in Charleston and Morgantown. 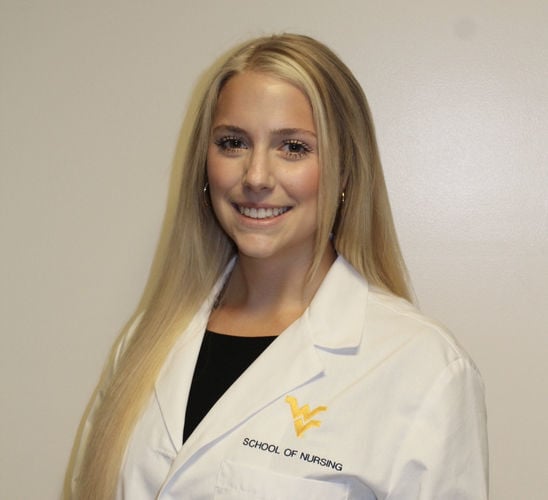 West Virginia University alumna Samantha Fabian is a captain in the West Virginia National Guard and program director for the COVID-19 mobile testing laboratories based in Charleston and Morgantown.

For many Mountaineers, including one with Putnam County ties, seeing their community members suffer in isolation has been a call to action.

These brave students, alumni and faculty are doing more than simply going above and beyond, they are working to save lives through increased access to COVID-19 testing, creating better personal protective equipment, delivering groceries and medicines to high-risk patients, raising money for COVID-19 relief and more. We caught up with a few of them (virtually) to hear their stories.

Lauren Maloney, a Parkersburg native, was entering the first semester of her senior year as a nursing student, and she couldn’t be more excited. “I always knew I wanted to come to West Virginia University as a young child. My parents are alumni and have instilled great pride for the state and university in me,” she said.

The year 2020 turned her life upside down like everyone else across the globe. Maloney found herself furloughed from her job as a server and sent home to finish the semester online. “[It] really opened my eyes to how serious this pandemic had become.”

Finding herself with a bit more free time on her hands now that many of her social interactions had moved online, Maloney decided she wanted to use her extra hours to help others. As a nursing student, her first thought was to volunteer at local hospitals. “I had reached out to family friends, Dr. Kimberly Stooke and Dr. Shari Vance, who are physicians at Mid-Ohio Valley Medical Group, asking if they needed any extra hands on deck.”

A week later, they called her back asking if she’d be willing to work with high-risk patients. She didn’t hesitate. “I have a love for helping others, which made this opportunity so rewarding.”

Maloney was put in contact with Brenda Bradley at the Mid-Ohio Valley Medical Group. Bradley had been tasked with coordinating which high-risk patients needed groceries, needed errands run or were running low on their medicines. She gathered these lists and sent them to Maloney.

“I would go to the grocery store, shop and deliver the groceries directly to the patient’s front door. I also picked up prescriptions from the pharmacy and delivered meals as well.”

She also took the time to check in on many of these patients, becoming a much-needed human connection. “I created relationships with each and every individual I came into contact with,” she said.

Of course, Maloney always took extra precautions when interacting with others, especially those most at risk. “Being a nursing student helped me stay safe during this pandemic. I have been taught how viruses transmit and what protective equipment I need to wear in order to protect myself and others. When shopping for and delivering groceries, I wore an N95 mask along with gloves. Often, I would keep cleaning supplies in my vehicle to disinfect products before dropping them off. The Mid-Ohio Valley Medical Group also supplied me with masks, gloves and sanitizing products.”

This experience has changed Maloney. “A gesture as small as delivering groceries or lending an ear to an individual can go a long way. You don’t realize a gesture so small can mean the world to someone else. I have also learned that if we come together as a community during difficult times, we can grow as individuals and as a community to become more philanthropic.”

The idea dawned on Kym Scott during a typical Zoom conversation with a colleague in June 2020. Both Scott, director of choral activities at WVU, and her colleague were lamenting the limitations in performance, creative expression and learning among their students since going into relative isolation. After all, in order to safeguard the health of their community, even singers have to wear masks. And masks are not designed for the nuances of performance.

Then her colleague suggested someone design a mask just for singers. It was a light bulb moment.

“We knew it was going to be a while before we could sing in the way that we used to, particularly group singing,” she said.

And horror stories of choirs that had attempted group singing and had contracted COVID-19 were circulating, further convincing Scott that someone needed to improve safety but also keep the spirit of their performance-based learning alive.

“I had some ability to play around with the idea,” she said.

Scott was intimately familiar with the intricacies of making fabric work for the wearer. In her former career, she was an award-winning fashion designer, specializing in bridal couture.

“One of the issues with the masks that we’re mostly wearing day-to-day is every time you take a good breath, you suck in the fabric,” Scott said. “We all know that we also struggle to have any kind of clarity in our speech when wearing those types of masks. So, obviously, singing in those masks meant it was really difficult to understand what anybody was singing and also difficult to create any kind of resonance.”

Scott started with those limitations and began designing and building, at first by hand, a product that could check all the boxes. What she came up with is a performer’s mask that hovers a few inches from the face, keeping the singer from sucking the fabric into their mouth while taking deep breaths.

At the same time, the mask’s edges fit tight to the wearer, limiting the potentially contaminated air flowing in and out. Her masks are constructed of sturdy cotton on the outside, non-woven polypropylene on the inside that acts as a filter, and another layer of cotton.

And possibly the best part? Her masks don’t fog glasses.

Design-wise, Scott’s masks were a step in the right direction. But would they really protect the wearer and public in the same or better ways?

For that, she enlisted the help of researchers at the WVU Center for Inhalation Toxicology to test their effectiveness. Scientists confirmed that Scott’s masks were even safer than a typical surgical mask. Although social distancing, hand-washing and avoiding prolonged time indoors in crowded spaces were still essential to keeping the virus away from performers, Scott’s masks went a long way to helping her and her students find a new normal — one that would keep the beauty and joy of performing going strong.

Today, Scott has been hard at work marketing and shipping her masks around the world since the product officially launched in August. After finding a reliable manufacturer that could produce the masks at scale and setting up a website for orders, Scott began rolling out shipments to as far away as Europe.

“The demand has been absolutely massive from day one,” she said.

Although creating such an innovative product — one that truly has the power to protect lives — has been invigorating, Scott will be happy to see the pandemic end and her masks become an important part of other aspects of life. She’s looking forward to selling them to construction companies or hospitals rather than schools and theaters.

“The best part is when people take the time to email me and tell me how thankful they are that they have this product and how well it’s working for them, how much their students are enjoying being able to sing again,” she said. “That’s what it’s all about.”

To say alumna Samantha Fabian has always had a lot of irons in the fire is an understatement. She holds degrees in animal science (Bachelor of Science, 2015); applied and environmental microbiology (Bachelor of Science, 2015); and genetics and developmental biology (master’s, 2018), and is working toward a doctoral degree in genetics and developmental biology — all from WVU.

She’s also a captain in the West Virginia National Guard.

“I am a full-time soldier Monday through Friday, and I also have drill once a month. I am also a full-time Ph.D. student,” she said. “A lot of Ph.D. work gets done in evenings and weekends.”

But her latest role — one she gladly took on despite the challenges, risks and high stakes — has been as program director for the COVID-19 mobile testing laboratories based in Morgantown and Charleston — the first in the nation to be approved by the Department of Defense.

She didn’t start on the front lines, but she’s been in the fight from the beginning.

“When this pandemic first broke out, I was pulled from my full-time duty and started working here in Morgantown with the [Monongalia] County Health Department doing contact tracing,” she said.

But when the state health lab received some special testing equipment, they wanted to share that equipment with the National Guard in the hopes they could deploy it quickly and efficiently in even the most rural locations. That’s how the mobile-testing concept was born.

And that also meant Fabian would soon be right on the front lines of a raging viral pandemic. But she felt ready.

“That’s the fun thing about being in the Guard,” she said. “I have my military job as a logistics officer, but then I get to use my civilian skill set whenever there’s something happening in the state that requires it. It was a really a good time to use my lab experience and then tie that operationally with the Guard.”

But starting the mobile testing program wasn’t a simple process. “You don’t just take a machine and start testing people. We had to get what’s called the Clinical Laboratory Improvement Program certification.”

Fabian describes it as the Department of Defense’s equivalent of the typical lab certification.

Once she and her team had gone through the certification process, she was the natural choice to direct the program. But first, they had to come up with the best way to deploy the testing. “We came up with this idea of putting it on a mobile platform, so we could reach more people, especially with West Virginia being a rural state,” she said. “And being a rapid test system, we can get results in 15 minutes, so why not bring it right to the people?”

She’s incredibly humble about the process she and the team were able to come up with, but under her guidance, along with Col. Mark Houk and Maj. Brian Ellis, the program has evolved into an efficient, mobile-testing machine.

The West Virginia National Guard’s mobile testing is split into two labs that cover the state. Fabian leads the Morgantown lab while Ellis leads the Charleston lab. With all her other responsibilities, this leadership role means even longer hours and more on her plate.

But she doesn’t complain. What keeps her going? “Knowing what sort of impact a rapid test can have on some individuals,” she said.

“There are situations where we’re testing military personnel or law enforcement, for example, and if they’ve been exposed or been out of state. This gives them the ability to get back into the fight a lot sooner.”

The above article appears in the spring 2021 WVU Magazine and is reprinted here by permission of West Virginia University.

For the first time in a long time, Sean Mulligan, a 2007 West Virginia University graduate, couldn’t make his annual pilgrimage to Morgantown.…

UK newspaper owner files antitrust suit against Google in US

Miners' union backs shift from coal in exchange for jobs