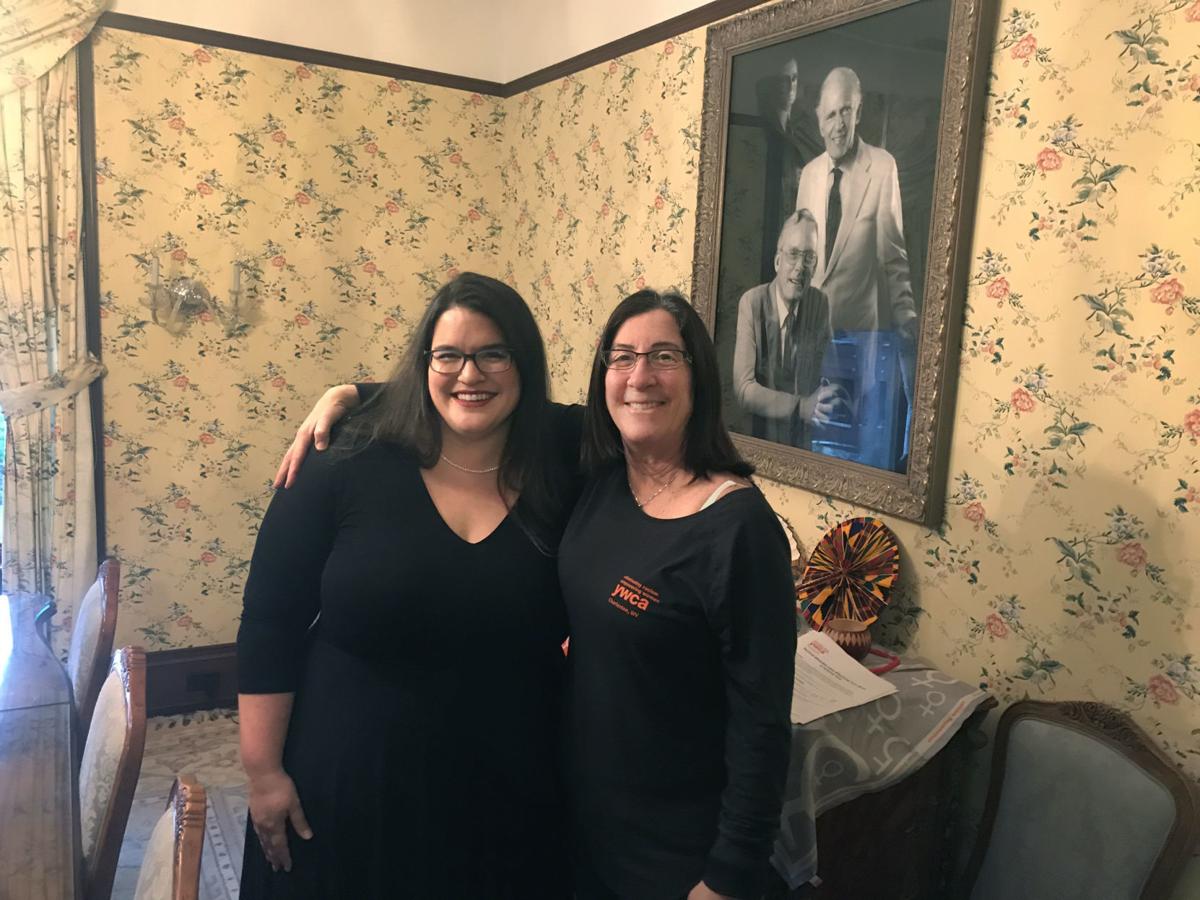 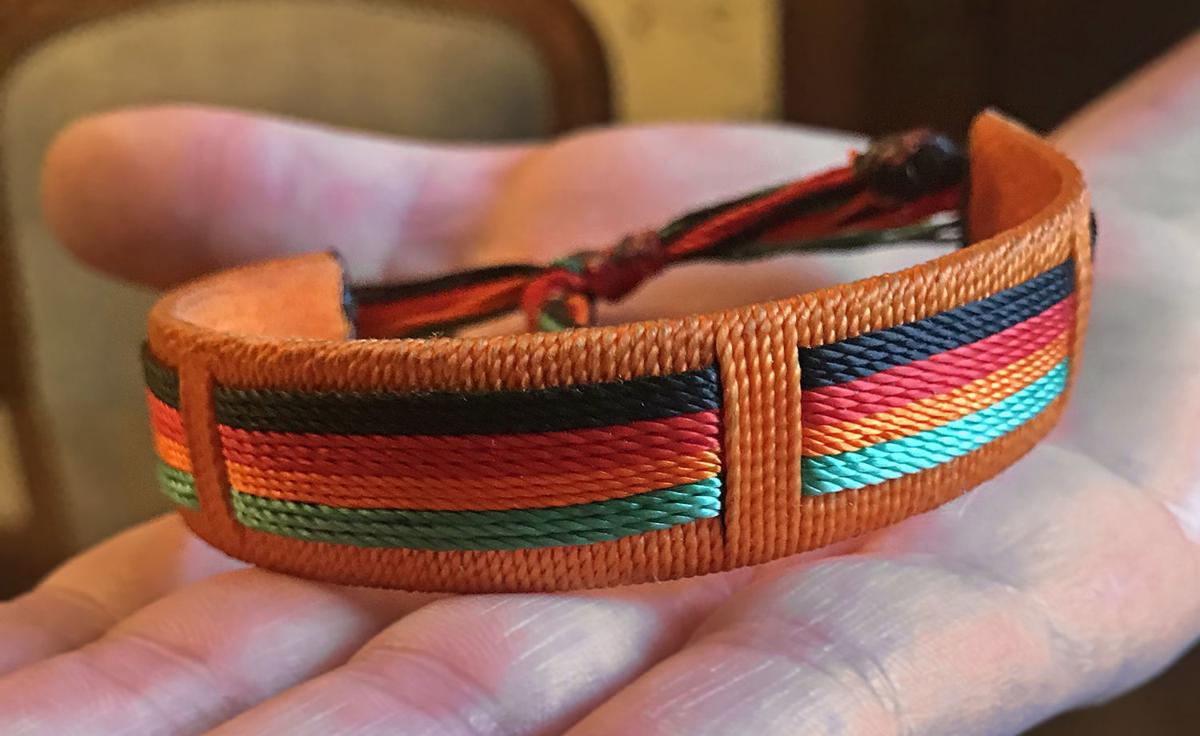 Andrea Thaxton Arbogast holds a bracelet given to her by a woman delegate from Zambia at the World Council. 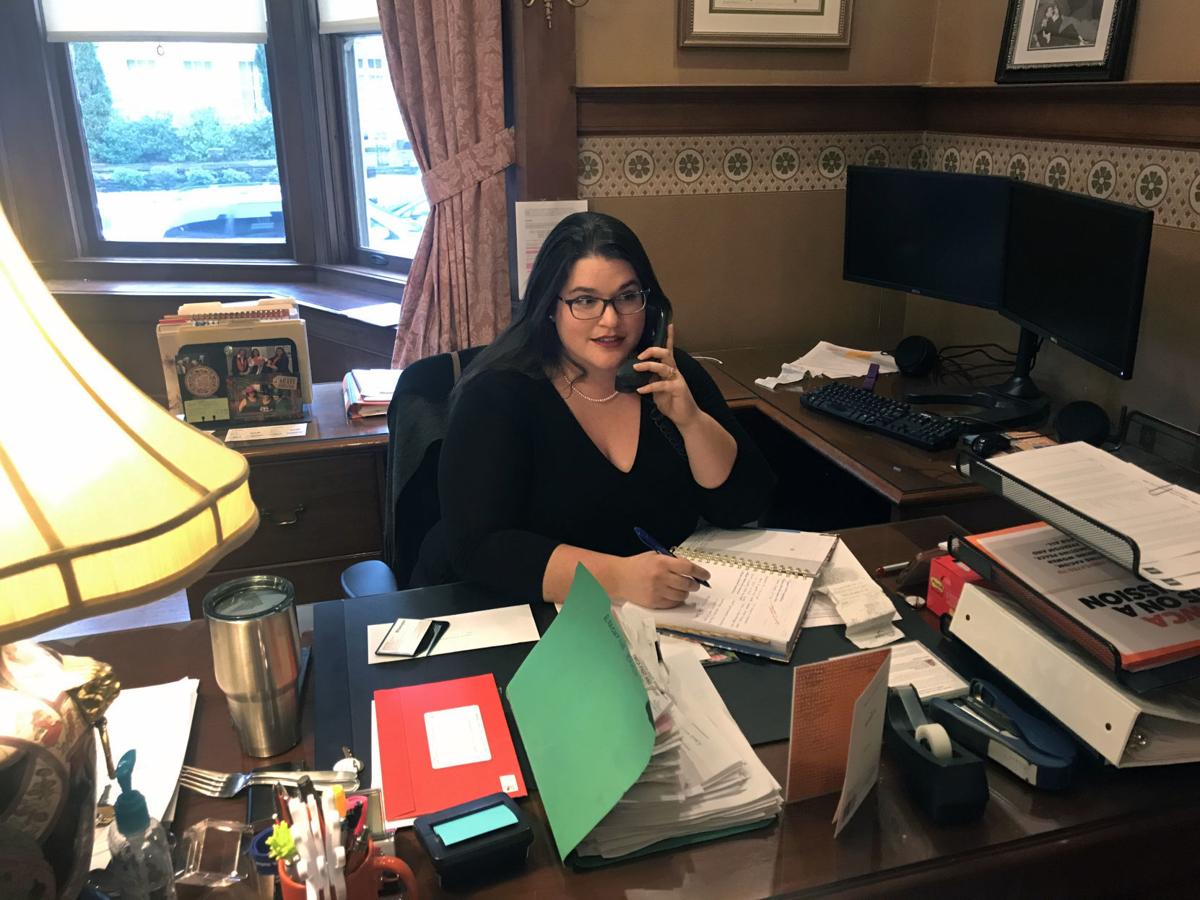 In addition to her duties as a member of the World Board of Directors, Andrea Thaxton Arbogast still works as an executive manager at Charleston YWCA. 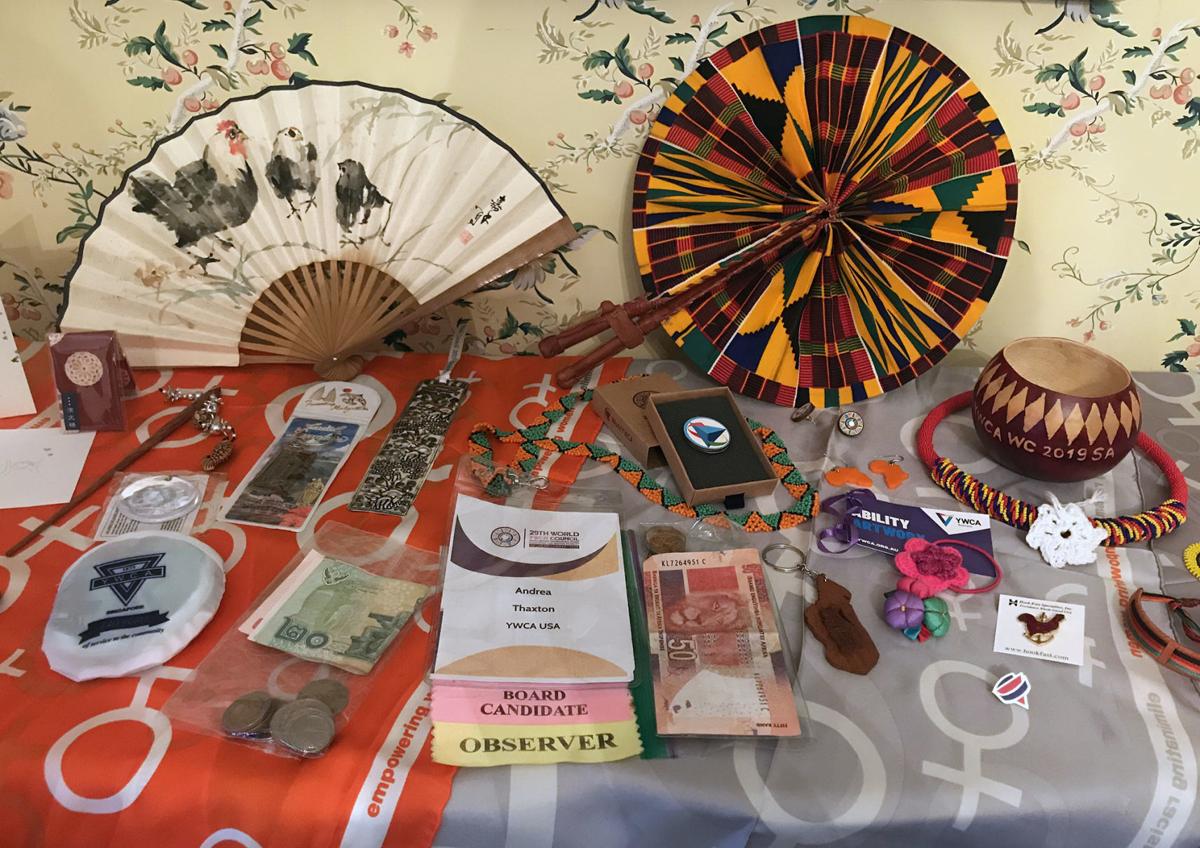 A collection of the memorabilia Andrea Thaxton Arbogast brought back from the two World Councils she attended. 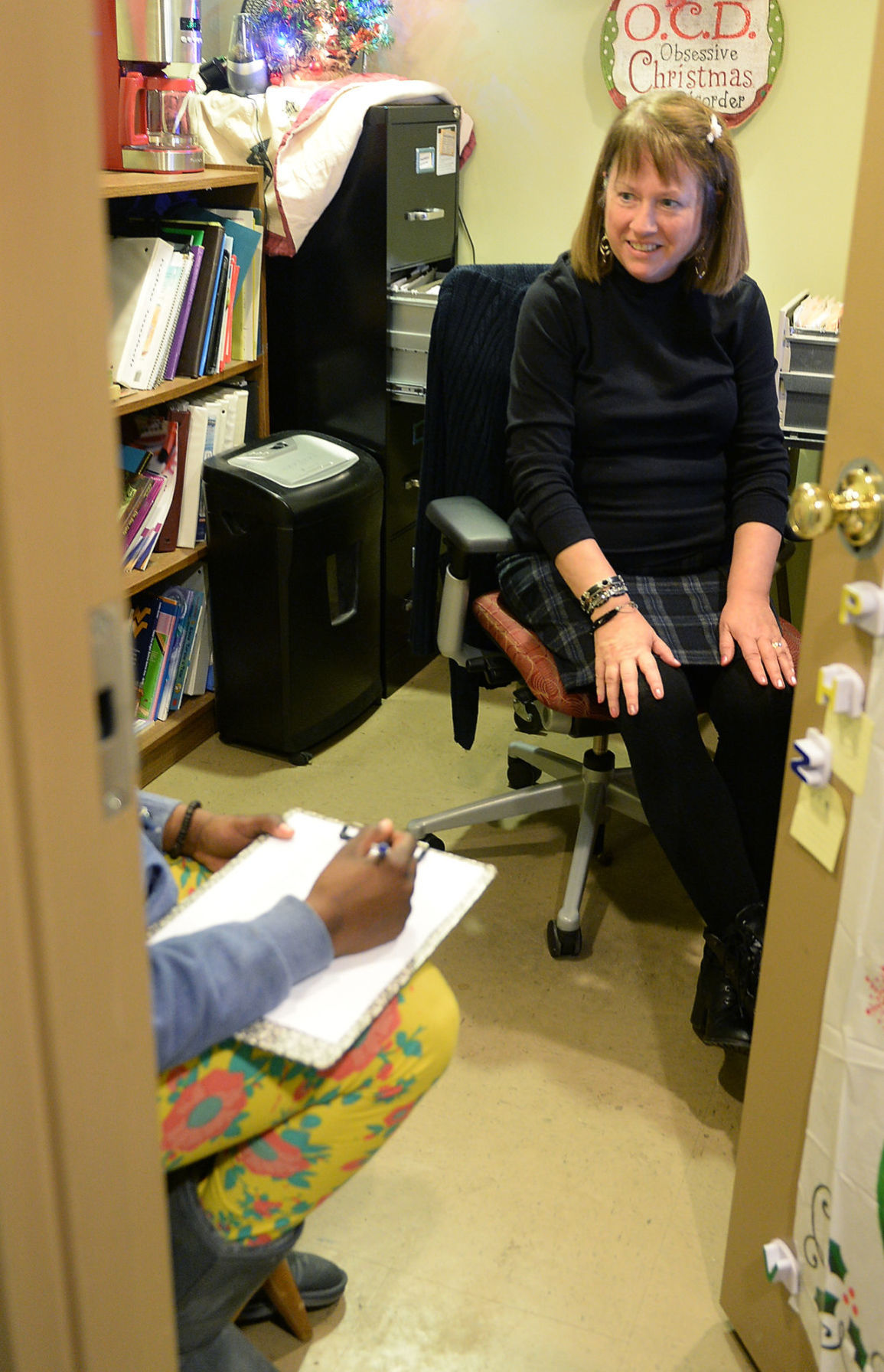 Shelly Vandale, Children’s Service Coordinator for the YWCA Sojourners Shelter, talks to a woman filling out forms at the shelter. 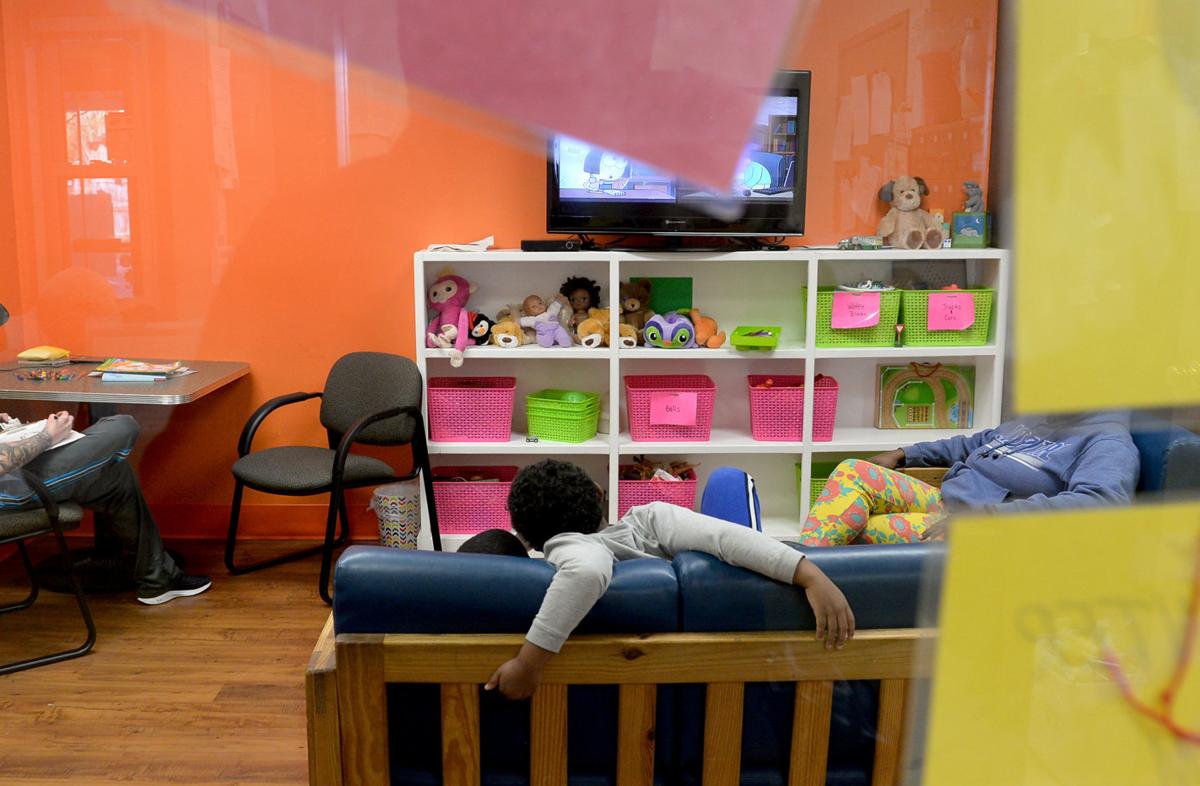 Children watch cartoons in the Children’s Activity Room at the YWCA Sojourners Shelter. 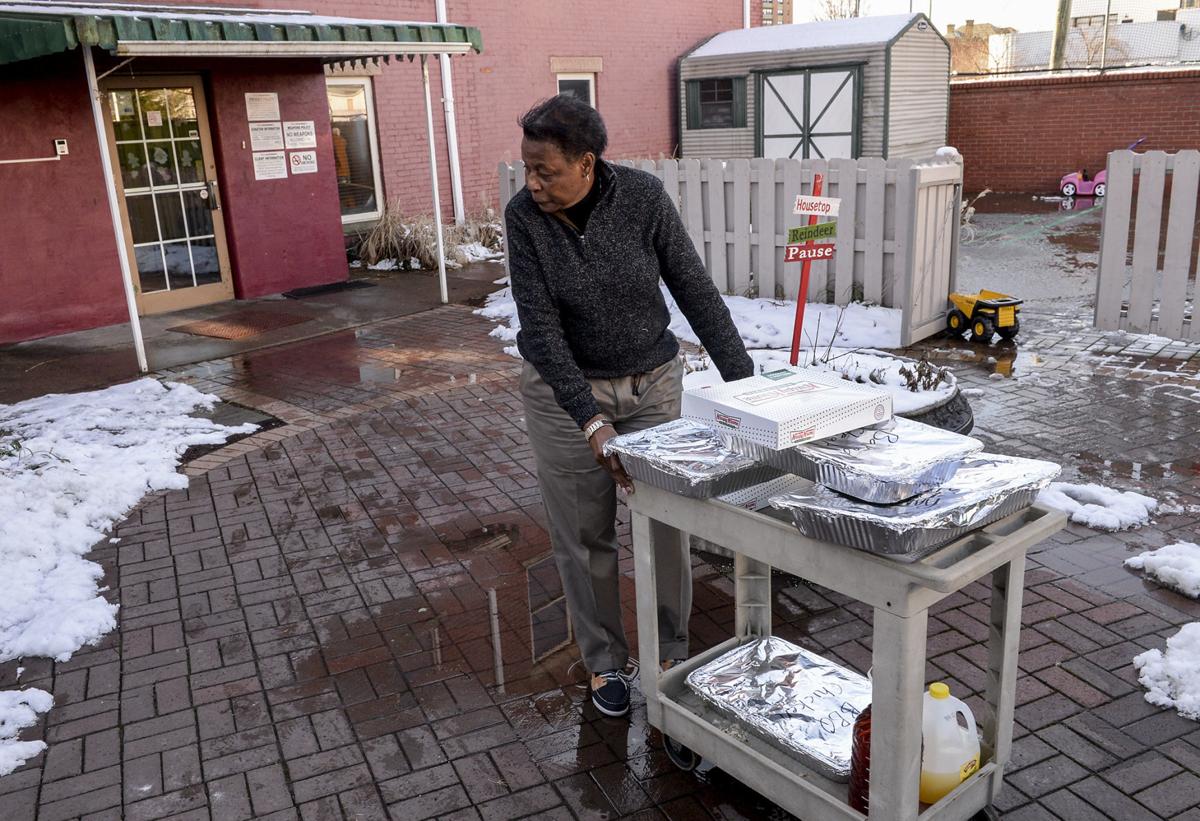 Margaret Taylor, Director of YWCA Sojourner’s Shelter, pulls a cart of donated food across the back lot into the kitchen at Sojourners. 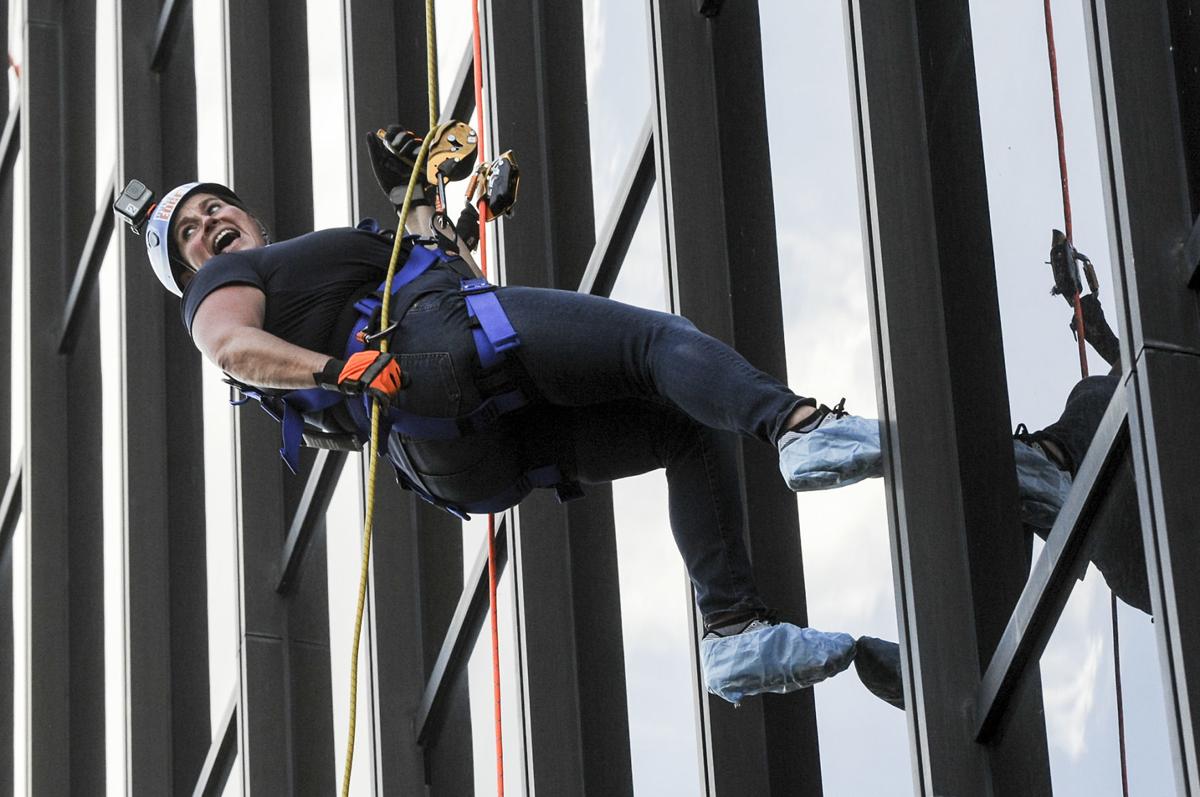 Charleston Mayor Amy Shuler Goodwin rappels down the 18-story BB&T Building in Charleston during last year’s “Over the Edge” fundraiser. The event raised money for YWCA Charleston’s anti-racism campaign. YWCA CEO Debby Weinstein said she hopes to do the event again this year.

Andrea Thaxton Arbogast holds a bracelet given to her by a woman delegate from Zambia at the World Council.

In addition to her duties as a member of the World Board of Directors, Andrea Thaxton Arbogast still works as an executive manager at Charleston YWCA.

A collection of the memorabilia Andrea Thaxton Arbogast brought back from the two World Councils she attended.

Shelly Vandale, Children’s Service Coordinator for the YWCA Sojourners Shelter, talks to a woman filling out forms at the shelter.

Children watch cartoons in the Children’s Activity Room at the YWCA Sojourners Shelter.

Margaret Taylor, Director of YWCA Sojourner’s Shelter, pulls a cart of donated food across the back lot into the kitchen at Sojourners.

Charleston Mayor Amy Shuler Goodwin rappels down the 18-story BB&T Building in Charleston during last year’s “Over the Edge” fundraiser. The event raised money for YWCA Charleston’s anti-racism campaign. YWCA CEO Debby Weinstein said she hopes to do the event again this year.

For Andrea Thaxton Arbogast, an executive manager at YWCA Charleston, the YWCA has always been about helping young women.

An example is a girls’ group she started at Capital High School, called YWCA Girl Talk. Any girl student is welcome to come to the meetings. Most who come learn about it by word of mouth.

“It’s for students who might need an extra boost. It’s about mentoring, and helping to show them options in life,” she said. “We follow them through their junior and senior years to help them prepare for graduation, and for what comes after.”

Another example is the Sojourner’s Shelter for Homeless Women & Families, a facility that provides emergency shelter and supportive services for women in crisis situations. There is also the Racial Justice Program, the Resolve Family Abuse Program and many other community services.

But the reach of YWCA extends beyond the local.

Arbogast is not only involved in helping women at the local level. As of November, she is also a member of the YWCA World Board of Directors. The story of how that came about is a testament to her passion and determination.

From Elkview to South Africa

Arbogast’s first exposure to the YWCA at the international level was in 2015, when she attended the World YWCA Council in Bangkok, Thailand, as a delegate. It was an eye-opening experience for the Elkview native, one that she credits with changing her life.

“I was opened up to a world network of incredible women,” she recalled. “I learned that we’re all interconnected, that we all support each other.”

The World YWCA holds a World Council every four years. From 300 to 500 delegates and observers convene to make policy and set goals. The council is the highest decision- and policy-making body in the global YWCA movement. But it’s more than just a governance meeting — leaders are selected, global challenges addressed and new friendships made.

“When I first came into the YWCA, I didn’t realize there was such a national and global scale to it,” Arbogast said.

Even as she returned to her duties with YWCA Charleston, she began making plans to attend the next World Council in 2019. As she puts it, she had been “bitten by the bug.” She met with influential people, applied for a scholarship and positioned herself to “hopefully be thought of again.” In her scholarship application to the national organization, she stressed the need to “act local, think global.”

Her efforts paid off. She was selected by the national board to attend the 2019 World YWCA Council in Johannesburg, South Africa, as the U.S. nominee for the World Board of Directors.

At each World Council, the delegates vote on a new board. In 2015, Arbogast had been one of those voting delegates. In 2019, she was a nominee standing for election. As such, she was interviewed and grilled by the women delegates over the course of the council, which took place Nov. 17-22.

Of the 41 nominees, only 20 would be selected. When the votes were tallied and the new board members announced, Arbogast saw her name flash across the screen. With tears in her eyes, she realized she was now part of the governing body of a global organization.

As the gravity of her new leadership role began to sink in, Arbogast reflected back on her meeting with one of the delegates.

“A woman named Rosalie came up to me before the vote. She was from Zambia. She asked a lot of tough questions. She wanted to be sure her vote mattered.”

The encounter made her nervous. After all, Rosalie was a seasoned veteran who’d been in the movement for 30 years. But after the votes were cast, and Arbogast knew she’d been elected to the board, Rosalie returned.

“She came up and said she voted for me, then gave me a bracelet,” Arbogast said. “It was so meaningful to me. I feel like Rosalie made me work for it.”

Arbogast is the only American on the new board. The board meets four times a year, either through video conferencing or face to face. “The next face-to-face meeting will probably be at the headquarters in Geneva, Switzerland,” Arbogast said.

Her national CEO, Alejandra Castillo, who attended the World Council, told her, “You go in there and be bold. And know that we’ve got your back.”

“She’s a rock star. She’s amazing,” Weinstein said. “It floors me to think that here in little Charleston, West Virginia, we have this incredible woman who is part of the World YWCA Board of Directors representing 120 countries.”

Arbogast feels she brings a distinct perspective to the world stage. “I’m representing a rural community that is underrepresented. People are learning about an America they aren’t familiar with. I met a woman from New Zealand who is also on the board. When I told her I was from West Virginia, I could see her thinking. I asked her what was on her mind. She said, ‘West Virginia ... I’ve heard that before. Wasn’t it a song?’

“So, here we are in South Africa, and I start singing ‘Country Roads’ to her. She said, ‘Oh, my gosh, I hear that song all the time in New Zealand.’”

When asked to share a story that shows what the YWCA can do in small but significant ways to improve the lives of girls and women, Arbogast has a favorite: the watering wells of Sierra Leone.

Sierra Leone, a country in West Africa on the Atlantic Ocean, was an infamous departure point for the transatlantic slave trade. The capital, Freetown, was founded as a home for repatriated slaves in 1787.

In modern times, the country fought an 11-year civil war. The war was declared over in 2002, but violence and human rights violations continued to be major problems.

Arbogast heard this story from Casey Harden at a regional meeting, when Harden was a regional vice president. In January 2019, Harden was appointed as General Secretary of World YWCA.

“The YWCA of Sierra Leone asked women from the U.S. if they would be willing to provide grants to dig new wells closer to the villages. We provided two $5,000 grants. They were able to move the wells and improve the villagers’ quality of life. The grants gave the girls more safety, and also the chance to attend school.

“This story moved me,” Arbogast said. “There are people in life who have callings. I wanted this to be mine. I feel I’m doing exactly what I need to be doing — helping people with life problem solving.”

After returning from World Council, Arbogast continued to meet with her Capital High students. “My duties with the world board are in addition to my duties here in Charleston,” she pointed out.

Her mentoring group at Capital now has about 10 students who meet regularly. “The number fluctuates,” she said. “We work with the counselor, who is also a board member, and she will sometimes recommend our group to students.”

These are students who could be at risk of poor academic performance, teenage pregnancy and dropping out of school. “Some don’t have the home support that they need. They need self-esteem and confidence building. We want them to understand that they can have a future, and that future can look like what they want it to.”

The Sojourner’s Shelter, a 75-bed licensed facility, takes in single women, women with children, men with children and families. The shelter serves about 900 people a year; most stay only a few weeks or months. The YWCA works with residents to help them become self-sufficient.

“The staff there are special people,” Arbogast said. “The work they do in the domestic violence program would break my heart every day.”

YWCA Charleston holds fundraising events throughout the year to raise money for Sojourner’s and other programs. The events include a spring fashion show, Girls Night Out, Race Against Racism, and — new last year — Over the Edge, an urban rappelling event where people who raised $1,000 could rappel down the BB&T building. Weinstein said they hope to do Over the Edge again this year.

“We did it during FestivALL, and it was pretty special,” Weinstein said. “There are some complications because of the merger of BB&T and SunTrust. We are hopeful that the new company will let us do this again.”

Weinstein said that planning events is better than “just having our hand out saying ‘Please support battered women and children.’ We don’t do it because it’s tons of fun. It’s a lot of work. But we need help financing our programs. We want to show the community that we are working hard to raise funds.”

Andrea Thaxton Arbogast: 'We are one'

Every four years, the World YWCA conducts a series of business meetings inviting women from YWCAs in 120 countries.