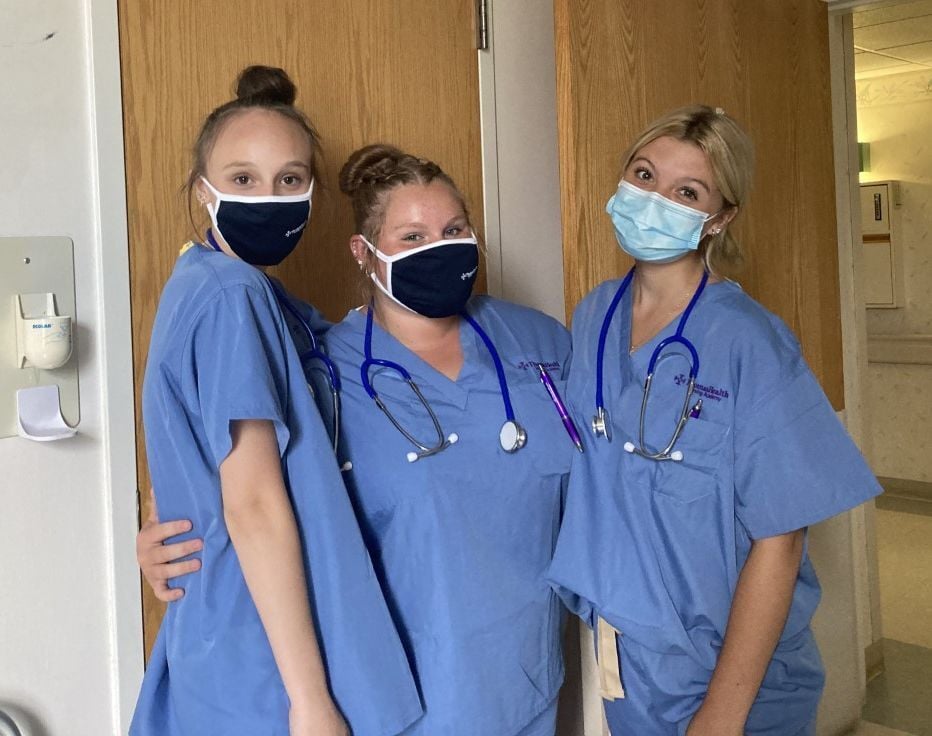 Area high school students (from left) Jadyn Settle, Chloe Sovine and Emma Lovejoy attended their first Thomas Health Junior Nursing Academy this week. Each has an interest in pursuing a career in a nursing or other health-care-related field. 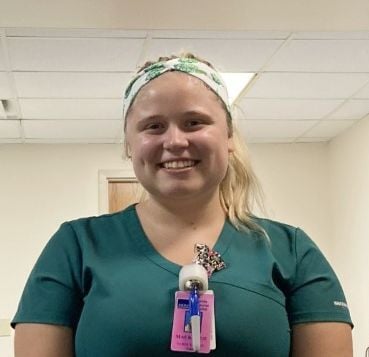 MacKenzie Mcghee’s first experience with the Thomas Health Junior Nursing Academy came with a slight dose of disappointment a few years ago.

Because she wasn’t old enough yet to qualify for the program.

“I saw the announcement in the newspaper, but I was too young to do it that year, so I just watched the next year for it to be in there and I just applied for it,” Mcghee said.

After being accepted for that session while attending John Adams Middle School, the Charleston native’s ensuing academy experiences have been fulfilling, fruitful and rewarding, progressively, professionally and personally.

“I did the academy and then I volunteered here at Thomas until I graduated high school,” the 20-year-old Huntington resident said. “I was in the nursery and NICU [Neonatal Intensive Care Unit], and I knew that was what I wanted to do, but I just wanted to do something at the hospital and gain more experience.”

A nurse extern at Thomas Health now, Mcghee attends nursing school at St. Mary’s Hospital in Huntington, on course to graduate in December.

On Tuesday, Mcghee spoke about her career arc with academy newbies, sharing her knowledge and experiences and lending a hand (or both) to the skills labs and other hands-on activities. “I talked to them about all that I did, how I got to help and how I got here. It’s teaching them that it’s possible to get from the academy to nursing school.”

Herbert Hoover High School student Chloe Sovine was among the 90-plus Junior Academy members in Mcghee’s audience this week. “I’ve always wanted to be in the medical field,” she said, “and I figured this would give me a good head start. All my friends did it last year, and they had nothing but good things to say about the program, so I thought I’d try it this year.”

Students mentioned family ties as an impetus to enroll. Junior Academy and South Charleston High School student Emma Lovejoy said her interest in the program stemmed from her mother’s career in home health care. Capital High student Jadyn Settle said her cousin had attended two years of the academies, and “she said it was something I should try if I wanted to try the medical field.”

“I’d like to be a paramedic or a labor and delivery nurse,” Settle said.

“I’d like to be either a pediatric nurse or a NICU nurse,” Lovejoy said.

“I want to be an optho neurologist,” said Sovine. “They study the nerves in your eyes. I’ve had eye problems ever since I was little, so that’s kind of what inspired me to do it.”

Locally and nationally, health-care professionals are examining, exploring and expanding their practices to staunch the statistical bleeding o…

Nick Scala: Does this mean we have to forget about Louis Sockalexis?

Chuck Landon: It's like a soap opera in shoulder pads