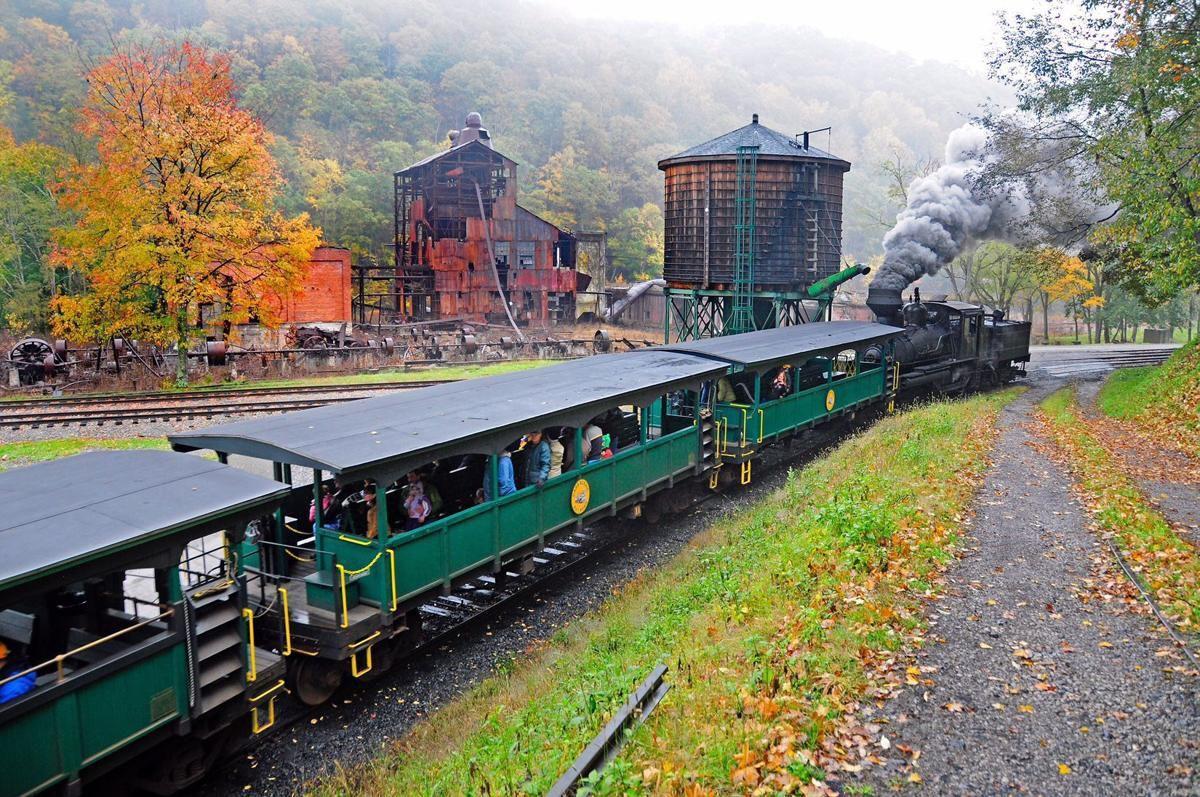 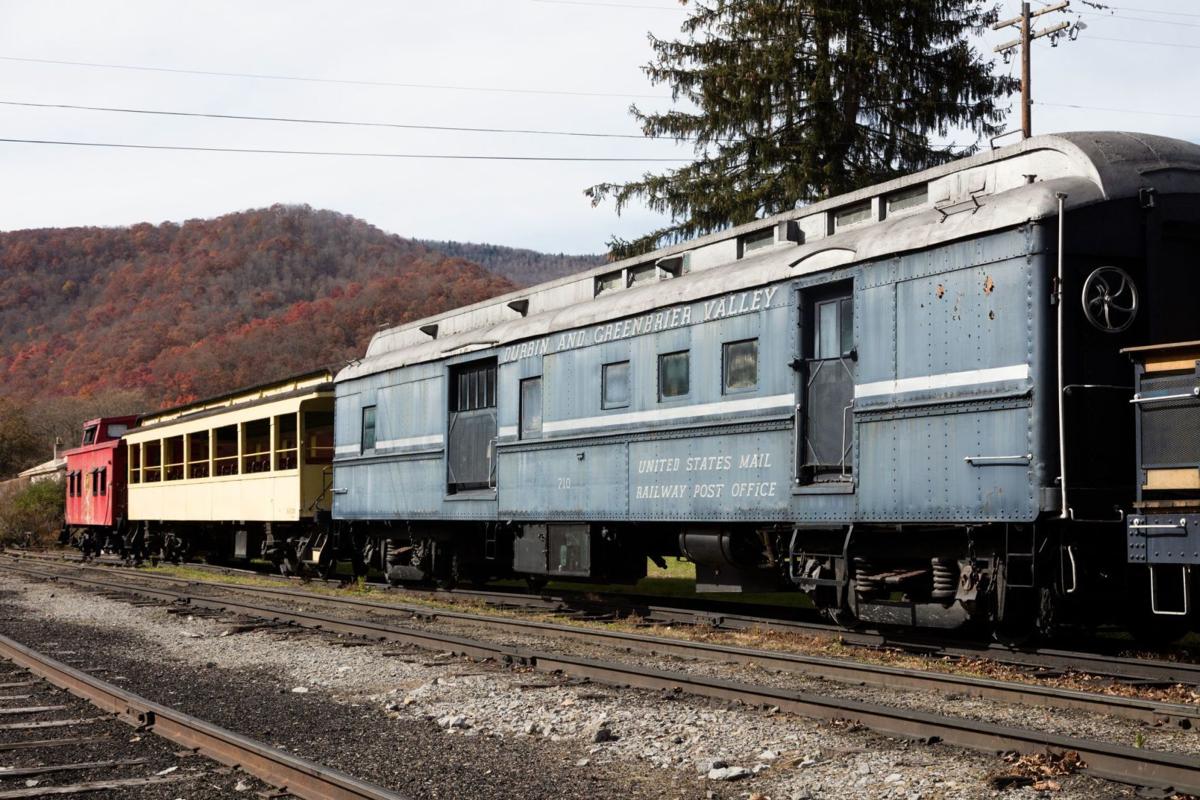 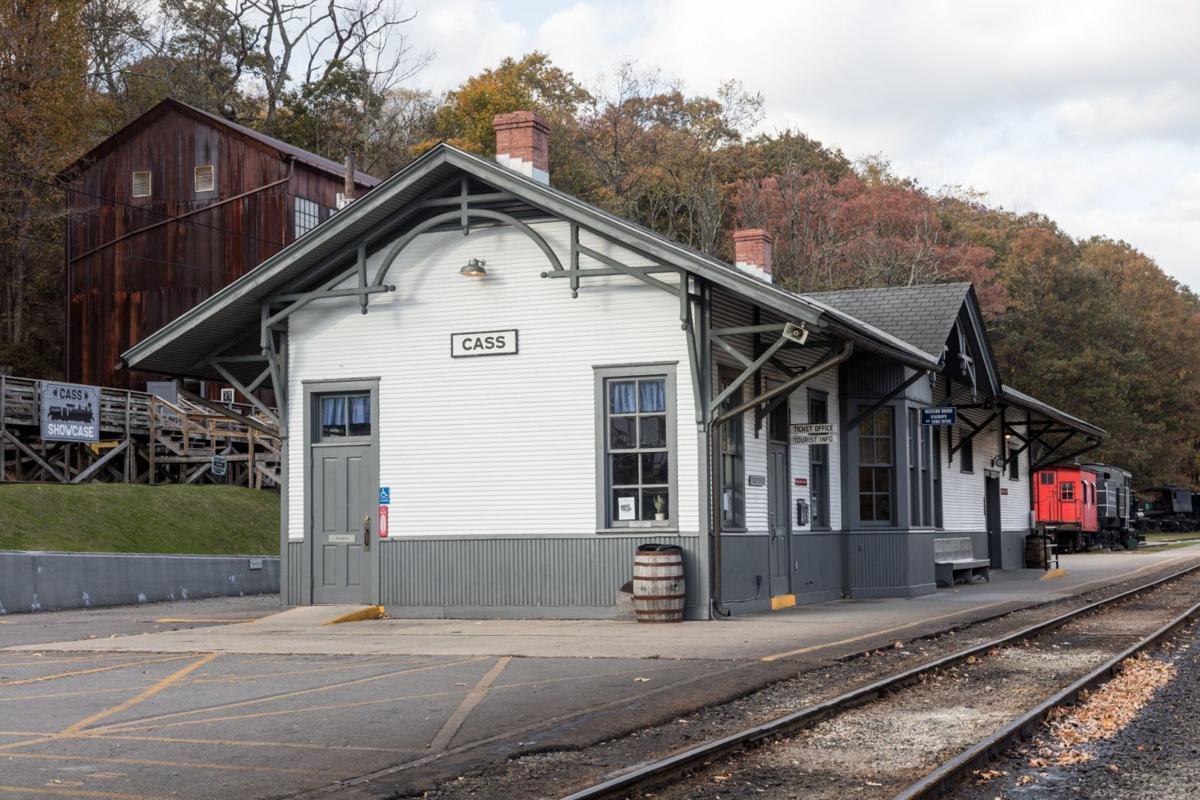 The restored railroad depot in Cass is the centerpiece of the former logging town. 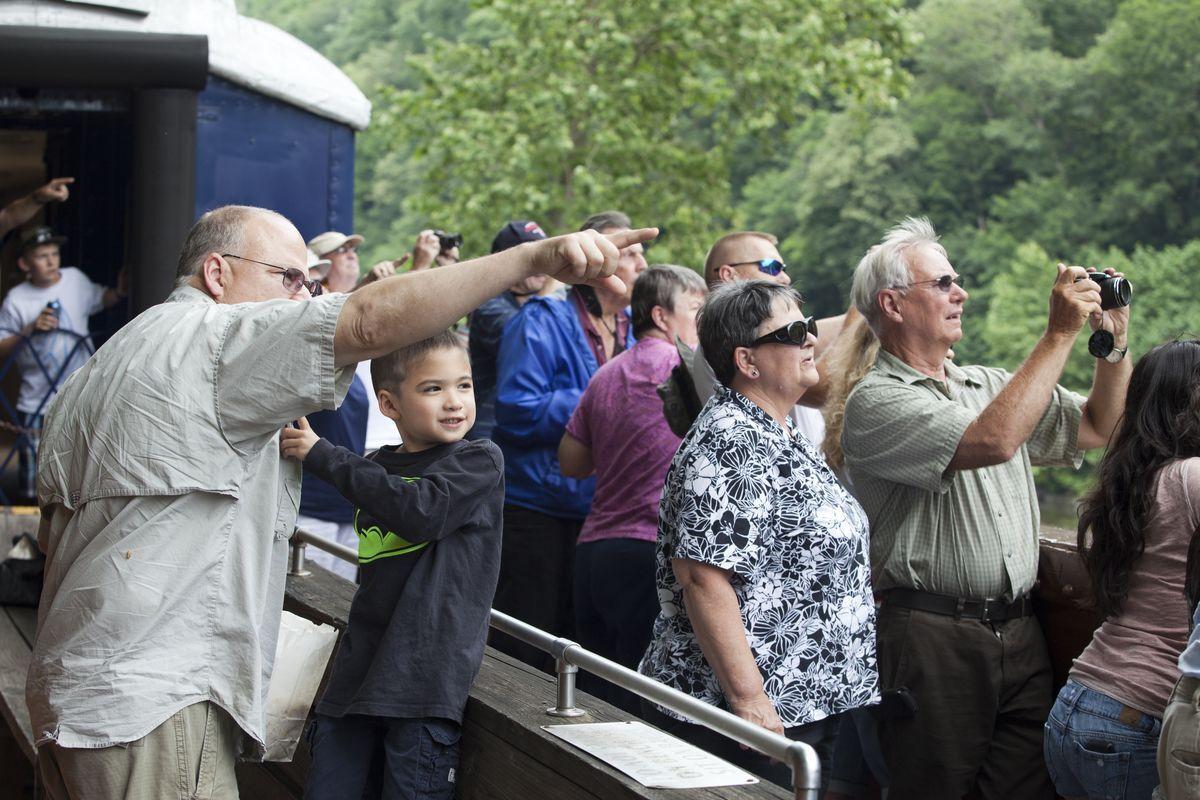 An open-air car on the Potomac Eagle is a good spot to keep a lookout for bald eagles, which frequently are spotted. 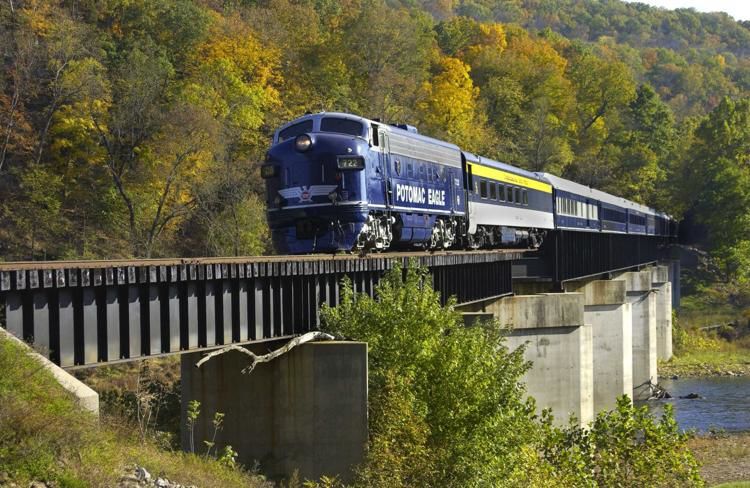 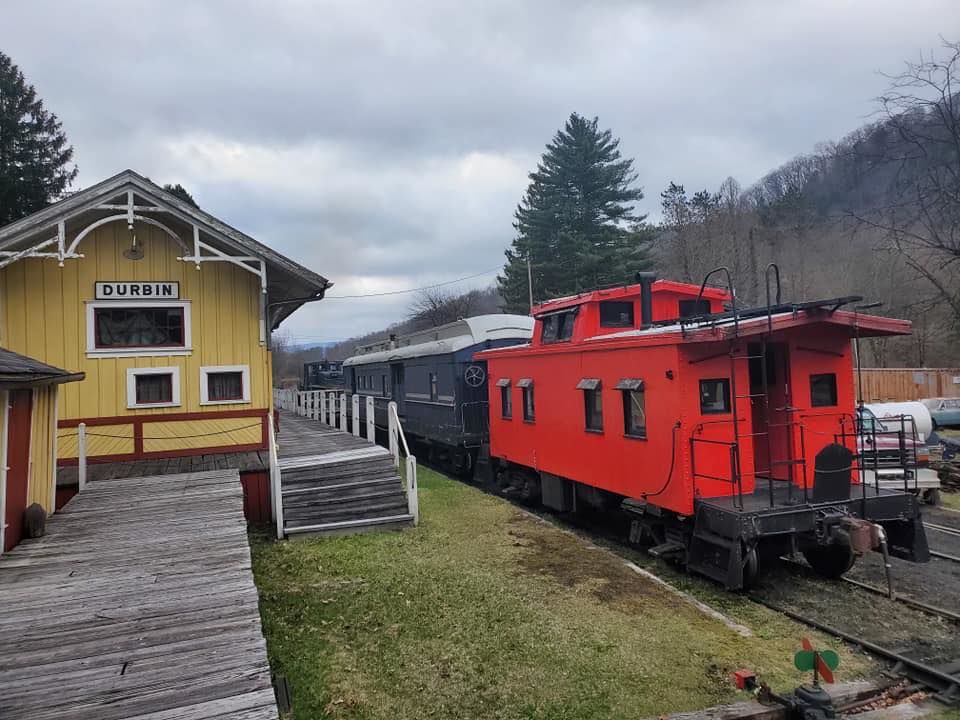 The tiny settlement of Durbin is located near the headwaters of the Greenbrier River in Pocahontas County. 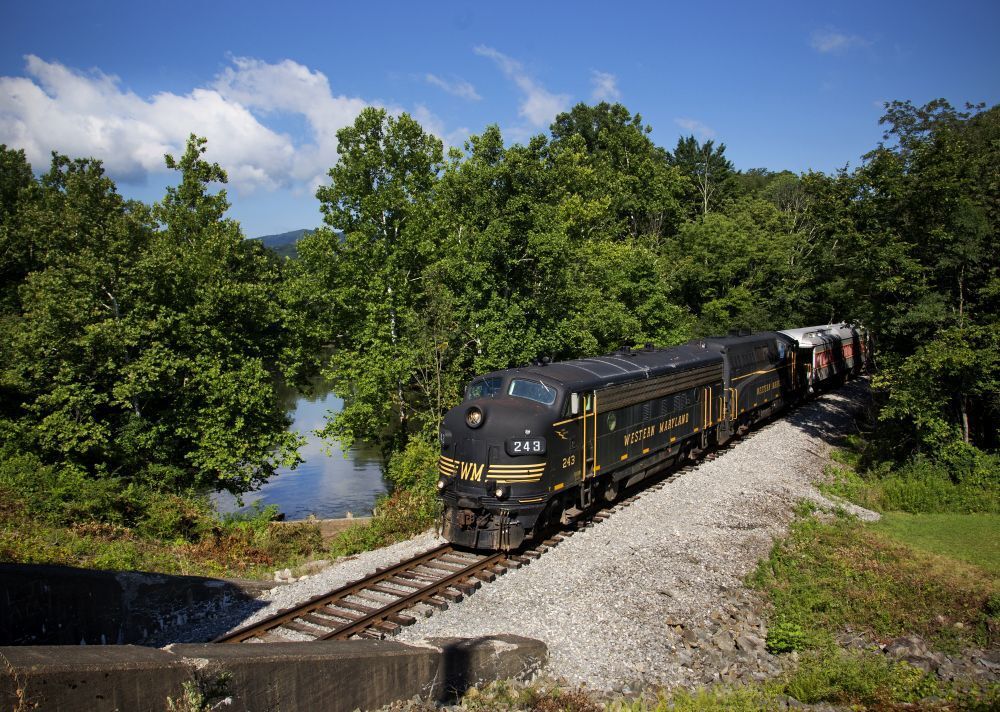 The New Tygart Flyer is a vintage diesel-powered streamliner that carries riders to the High Falls of Cheat. 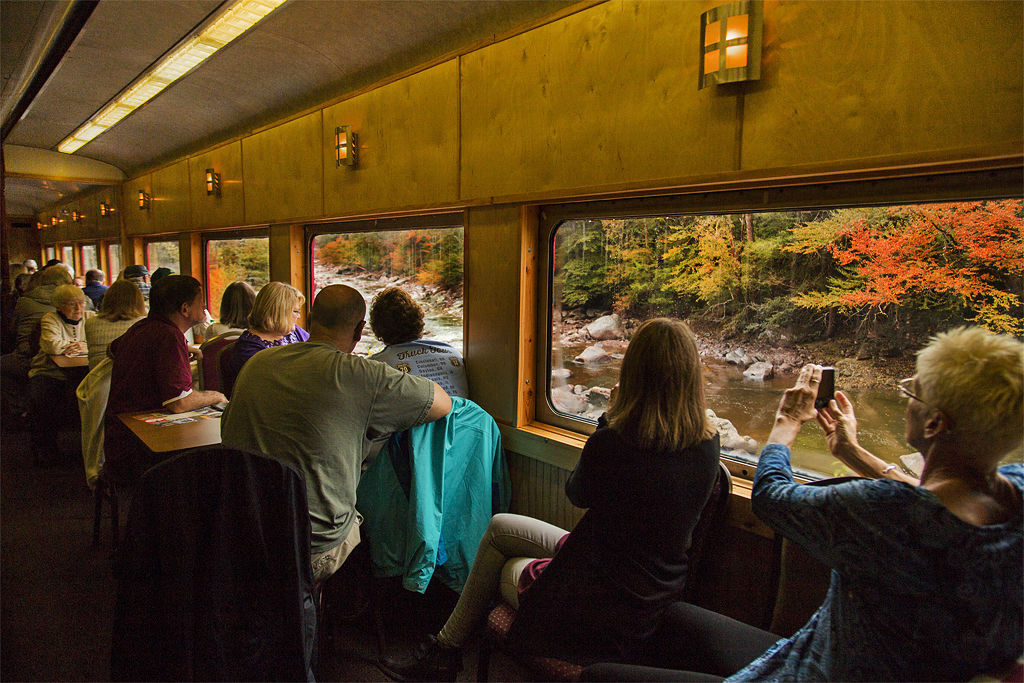 Riders aboard the New Tygart Flyer travel in air-conditioned comfort.

The restored railroad depot in Cass is the centerpiece of the former logging town.

An open-air car on the Potomac Eagle is a good spot to keep a lookout for bald eagles, which frequently are spotted.

The tiny settlement of Durbin is located near the headwaters of the Greenbrier River in Pocahontas County.

The New Tygart Flyer is a vintage diesel-powered streamliner that carries riders to the High Falls of Cheat.

Riders aboard the New Tygart Flyer travel in air-conditioned comfort.

Railroads are woven into the fabric of West Virginia’s history. The state’s tourist trains provide passengers a look back at that history — while treating them to breathtaking scenic views.

Ordinarily, the trains start their season in May. But 2020 is no ordinary year.

The arrival of the COVID-19 pandemic made this year’s May startup impossible. Now the trains finally are running again, albeit for a shortened season and with a long list of anti-virus precautions.

In years past, the only masks you might see on your train were hiding the faces of bandits intent on making off with your wallet or purse. Now, of course, all tourist train personnel are wearing face masks, and masks are required for all but the youngest passengers.

Social distancing, too, is the order of the day. The capacity of tourist train cars is being limited, generally to 60 percent. The number of people allowed in depots and stores is also limited, and ticket agents and store clerks now work behind newly installed plastic shields.

Here’s a look at this year’s shortened tourist train season:

The Potomac Eagle Scenic Railroad (PESR), based in Romney, began its shortened 2020 season on June 13.

Celeste Franzen, one of the PESR’s owners, told the Hampshire Review that maybe 90 percent of the calls they get at the station are people inquiring about the railroad’s COVID-19 restrictions. Franzen said they take all those concerns seriously.

The PESR operates excursion trains from Romney to Moorefield, hauling a mixture of cars behind early model diesel locomotives. It travels the tracks of a former Baltimore & Ohio Railroad line that’s now owned by the West Virginia State Rail Authority and known as the South Branch Valley Railroad.

The South Branch is nicknamed the “Chicken Railroad” because it serves the region’s poultry industry. That’s why the state bought the trackage when the B&O abandoned it. Without the rail link, the industry wouldn’t have survived.

It was a state Public Service Commission study that first suggested a scenic excursion train would be successful on the South Branch. From that study, members of the Romney Business and Professional Organization began an effort to make the idea a reality.

The South Branch began operating excursion trains in 1979. Most excursions were in the fall to take advantage of the colorful woodland foliage but also included special trips for school groups and Christmas trains.

In 1991, it was decided to contract with an outside company to market and operate excursions. The Eagle Cañon Passenger Car Company began operating the Potomac Eagle Scenic Railroad from a siding named Wappocomo Station just north of Romney.

In addition to rich history and beautiful scenery, riders on the Potomac Eagle frequently have an opportunity to spy high-flying American bald eagles (hence the train’s name).

Bald eagles need clean water and tall, mature trees for suitable habitat. The South Branch provides both those things. The Trough, a 6-mile-long, steep, narrow gorge that the South Branch flows through, limits access to this area. This isolation is an important need for bald eagles to thrive.

In 2019, Railroad Investment Corporate Holdings (RICH) of Sylva, North Carolina, purchased the Eagle Cañon company. Robert and Celeste Franken established RICH in 2018. He has nearly 40 years of experience in the railroad industry. Her expertise is in marketing and entertainment.

For reservations and information on the Potomac Eagle, visit potomaceagle.com or call 304-424-0736.

West Virginia has 36 state parks. One of the smallest but most popular is the Cass Scenic Railroad State Park in Pocahontas County, which offers excursion rides on a historic logging railroad line.

The railroad is the last segment of a once-vast railroad network built, beginning in 1900, to harvest the red spruce on Cheat and Back Allegheny mountains. Today, restored logging locomotives pull and push renovated logging flatcars full of tourists up the steep grades.

The logging railroad was abandoned when the mill closed in 1960. Two years later, the property, including 11 miles of track, the shop, and other equipment and facilities, was purchased by the state to create the new park. The first passenger trip ran on June 15, 1963, as part of the state’s centennial celebration.

Over the years, the railroad and park have been expanded to include the town of Cass, additional locomotives, gift and craft shops, museums, and a new depot and engine shop. The park even offers overnight lodging in historic company houses.

Cass is the home to the world’s largest fleet of geared Shay locomotives. The legendary turn-of-the-century class C-80 Shay, No. 5 has been toiling up Cheat Mountain for nearly 115 years, making it one of the oldest engines in continuous service on its original line, and the oldest operable Shay in existence.

A 22-mile, 4.5-hour round trip takes riders from Cass, where the elevation is 2,390 feet, to the top of Bald Knob. At 4,842 feet, it’s one of the highest points in West Virginia. As the train climbs higher and higher, passengers realize they’ve entered an entirely new world because of the higher altitude.

At the top is a rustic overlook where you can see miles of spruce trees, along with plants and animals typical in the far north. You might even glimpse a snowshoe hare.

A much shorter 4-mile, 2-hour excursion travels from the Cass Depot to Whittaker Station and back. Passing the railroad’s water tower and machine shop, the train begins to climb the lower slopes of Cheat Mountain along picturesque Leatherbark Creek. The train then zigzags through two switchbacks, the engines alternately pushing then pulling passenger cars because the grade is so steep.

After passing the entrance to Cass Cave, the railroad levels off for the stop at Whittaker Station, the location of an authentic logging camp recreated by volunteers of the Mountain State Railroad & Logging Historical Association. Passengers have a 30-minute layover to enjoy the views.

When the state bought the Cass Railroad, the skeptics wrote it off as a waste of tax dollars. The first year of operation was all that was needed to prove the naysayers wrong. Twenty-three thousand people flocked to the former backwoods logging railroad for a fun-filled history lesson. And people have been coming by the thousands ever since.

Today, the Cass Railroad is managed by the Durbin & Greenbrier Valley Railroad. Its opening this year was delayed by the COVID-19 pandemic, but the trains finally began running July 4.

For reservations and information on the Cass Railroad, visit mountainrailwv.com or call 304-636-9477.

The Durbin & Greenbrier Valley Railroad also opened its shortened 2020 season on July 4, operating its popular Durbin Rocket excursion train out of the historic Durbin Depot. The D&GV is scheduled to begin operating its New Tygart Flyer out of it Elkins Station on August 6. Another popular D&GV train, the Cheat Mountain Salamander, will not run this season.

The Durbin Rocket travels along nearly 6 miles of former Chesapeake & Ohio secondary trackage, a branch line that connected to the C&O east-west mainline at Ronceverte, and then extended northward nearly 100 miles through Marlinton and the lumber town Cass as far as Durbin.

Much of the railroad’s route followed the grades of the scenic Greenbrier River, rising nearly 1000 feet over a hundred miles — hence the name of the C&O’s Greenbrier Division.

The first tourist operations at Durbin in the 1990s made use of a 20-ton Whitcomb switcher and a few pieces of converted rolling stock. Later a Climax-geared steam locomotive built in 1910 was employed and more passenger cars added — including a refurbished Railway Post Office car.

In recent years, a rare 3-truck geared Heisler locomotive on loan from nearby Cass Scenic Railway has been the principle motive power on the 2-hour run downstream from Durbin and back again.

The locomotive was built by the Heisler Locomotive Works in Erie, Pennsylvania, in 1929, for the Bostonia Coal & Clay Products in New Bethlehem, Pennsylvania. In 1939, it was sold to the Meadow River Lumber Compamia at Rainelle. Retired in 1967, it was bought for $20,000 by the Case Scenic Railroad and ran under its own steam to its new home.

The Durbin Rocket is a good choice for families with young children. The combination of open and closed cars give youngsters the option of free movement through the train as she chugs her way to and from the picnic spot at Hevener Station. An open car directly behind the locomotive offers young riders a good opportunity to see coal being shoveled into the tender and watch as she takes in water at a watering hole along the way.

Adult riders can chose between an open car that’s perfect for photo taking and sightseeing or the closed-car comfort offered by the coaches and cabooses.

After your ride, you may want to visit the Rail and Trail Store on Main Street across from the Durbin Depot, where you will find a large selection of souvenirs, gifts & T-shirts, along with the store’s famous “Big Scoop” hand-dipped ice cream cone.

For reservations and information on the Durbin Rocket, visit mountainrailwv.com or call 304-636-9477.

The New Tygart Flyer, set to debut for the first time this season on Aug. 6, is a four-hour round trip aboard a vintage diesel-powered streamliner that travels deep into the Monongahela National Forest to a location inaccessible by automobile.

The air-conditioned Flyer departs from the Durbin & Greenbrier Valley Depot in downtown Elkins. It travels over mountains, through an unusual and very snug “S” curve tunnel and across bridges that span roaring waters.

Its ultimate destination: the High Falls of Cheat, one of the most beautiful waterfalls in the Monongahela, and at an altitude of more than 2,800 feet, one of the highest. The falls are horseshoe-shaped and over 100 feet wide, falling 20 feet into a large pool below. The High Falls trail passes through old growth forest, and large hemlock as it winds through the saddle on Shavers Mountain. This is a beautiful yet challenging hike in the backcountry of the Monongahela National Forest.

Passengers disembark from the Flyer, seemingly in the middle of nowhere, but easily find their way to the falls. The location has several great observation decks allowing guests to enjoy the falls from many angles.

After 45 minutes or so, it’s time to re-board the train for the return trip through the mountains to Elkins.

For reservations and information on the New Tygart Flyer, visit mountainrailwv.com or call 304-636-9477.

Cardinal’s route is one of scenic grandeur

You don’t have to board a tourist train to be treated to a view of some spectacular West Virginia scenery by rail. Amtrak bills the route of i…