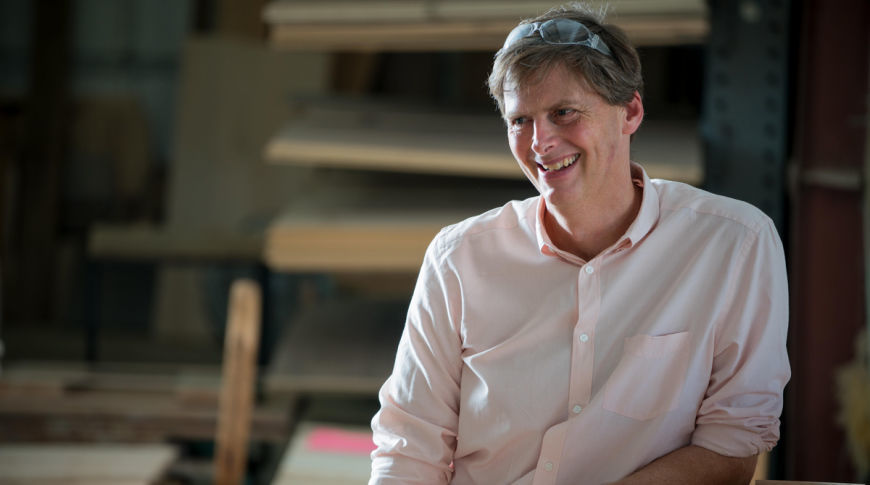 Gat Caperton is the founder and owner of Gat Creek, a Morgan County factory that makes hardwood furniture. 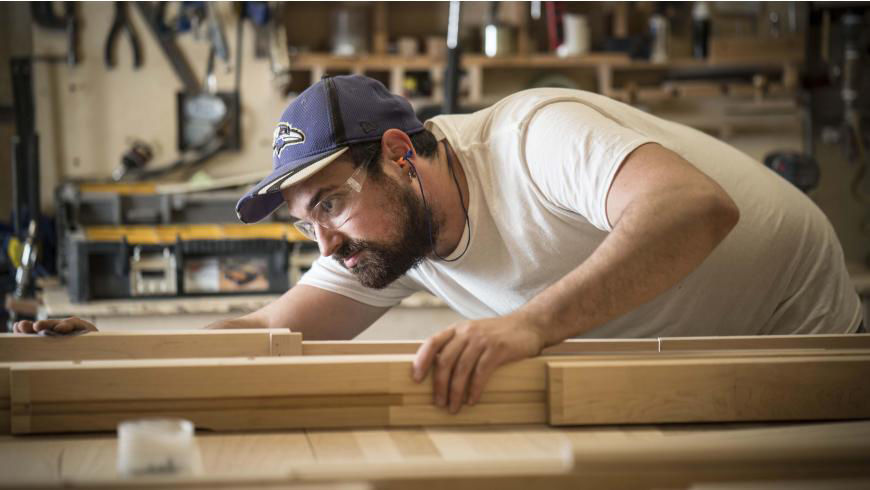 Chris Miller crafts a piece of furniture at the Gat Creek factory. 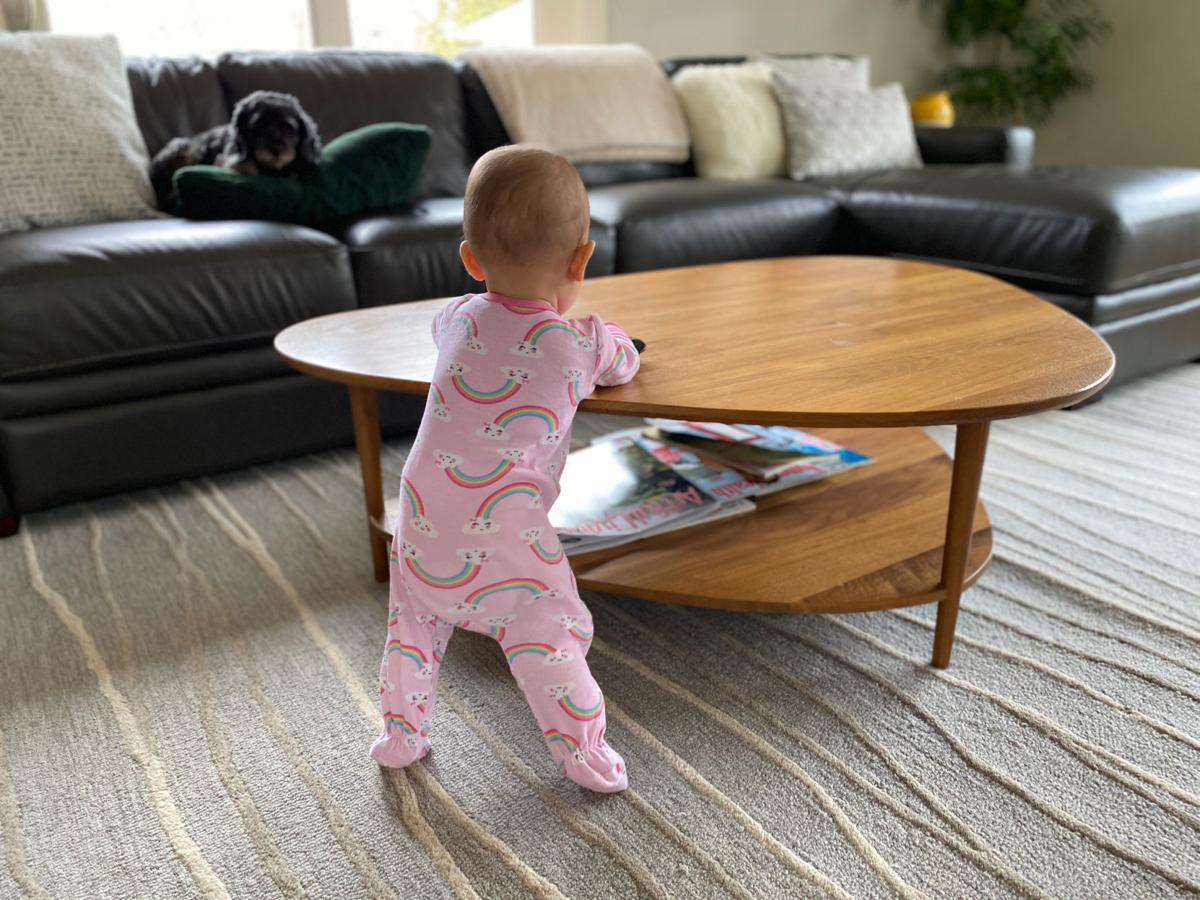 The guitar-pick shaped coffee table is the most popular item of hardwood furniture made by Gat Creek. “Customers want a beautiful product that is well made and will last a long time,” Gat Creek founder and owner Gat Caperton said.

Gat Caperton is the founder and owner of Gat Creek, a Morgan County factory that makes hardwood furniture.

Chris Miller crafts a piece of furniture at the Gat Creek factory.

The guitar-pick shaped coffee table is the most popular item of hardwood furniture made by Gat Creek. “Customers want a beautiful product that is well made and will last a long time,” Gat Creek founder and owner Gat Caperton said.

The Hargus family from Minneapolis, Minnesota, gets many compliments on their guitar-pick shaped coffee table. “We love the design,” said Joanna Hargus, a West Virginia native. “But we really love that these products are grown and manufactured in my home state.”

The Harguses bought the coffee table and a few other pieces from Room and Board, a high-end furniture retailer in Minnesota.

Starting a business seemed like a natural move for Gat. “My dad had a family [insurance] business. I graduated with a master’s degree in business with a focus on manufacturing.”

“When my father was governor, he always lamented the fact that we were cutting down trees here and shipping them off to North Carolina to make furniture,” he said.

So when Gat learned that Tom Seely was interested in selling his Berkeley Springs factory, he called him. “I told him I wanted to do a leveraged buy out,” he said.

The year was 1996. At 29, Caperton went right to work, turning what he called a “taped-together old factory” into a unique furniture company. His business plan would fly in the face of the current popular practice of mass-producing furniture.

“We build solid-wood furniture to your exact specifications using sustainably harvested lumber from the Appalachian forest,” the company’s website says. Each piece of Gat Creek furniture is signed and dated by the artisan who builds it, and then hand-finished using a board-by-board process. “We take pride both in what we create and how we create it.”

Against all odds, the plan worked. Gat Creek has found a niche market of families like the Harguses who demand a high-end, high-design product. Caperton sells his furniture at outlets like Williams Sonoma and Room and Board. “Our products are trending,” he said.

The “Gibson” — the guitar-pick shaped coffee table the Harguses bought — remains his most popular piece.

Caperton knows his market. “Customers want a beautiful product that is well made and will last a long time.”

“These customers are becoming more and more concerned with indoor air quality,” he said.

Imported furniture companies cannot guarantee their products will not emit dangerous fumes from the resins and other chemicals that go into their manufacture.

“Our customers know our products are naturally sourced and safe for your home. The hardwoods used in our furniture are harvested in a responsible and sustainable way that helps pull carbon from the atmosphere,” Caperton said.

“Children and forced labor are used in the manufacture of many products overseas,” Caperton said. “Our employees are people who live here. They are volunteer firemen, Sunday school teachers.”

The retaliatory tariffs imposed by the Chinese government on American hardwoods have turned out to be a benefit to Gat Creek, according to Caperton. The chaos in the marketplace has made his competitors’ products more expensive. Meanwhile, prices for raw hardwoods are actually down for domestic manufacturers like Caperton, because of the glut of inventory.

“The coronavirus also isn’t hurting us,” Caperton said. “It’s affecting my competitors. I am looking at growth in the next six months, and even expanded products and markets.”

Caperton has seen a lot of change in the hardwood furniture industry over the past 25 years. “It’s been a roller coaster.”

In 2001, he joined a group of domestic manufacturers who successfully sued the Chinese for illegally dumping furniture products below cost in the U.S.

He believes the current appetite for low-priced painted furniture and cabinetry still has to run its course. But if more families like the Harguses began to demand well-made products that are locally sourced and American made, not only would Gat Creek continue to grow — so would the U.S. economy.

“We are a forgotten industry,” lamented William Bess.