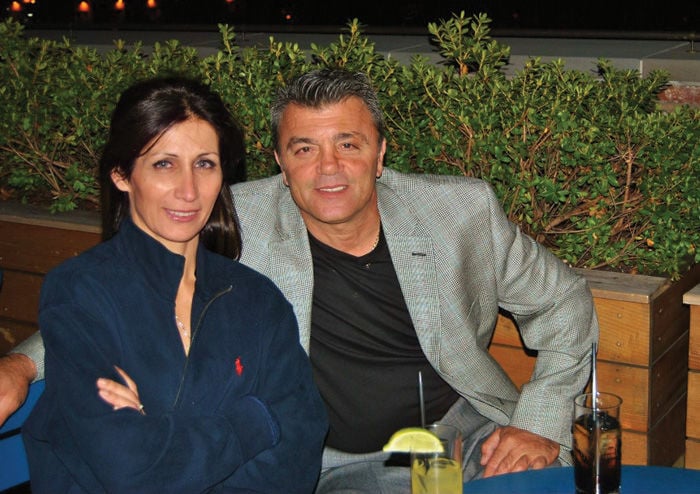 Manoli and Aoleen Stavrulakis are well-known in the Charleston business community. Manoli Stavrulakis is from the Island of Crete, in Greece, and his wife, Aoleen, is from Baghdad, Iraq. They came to America in the 1990s. 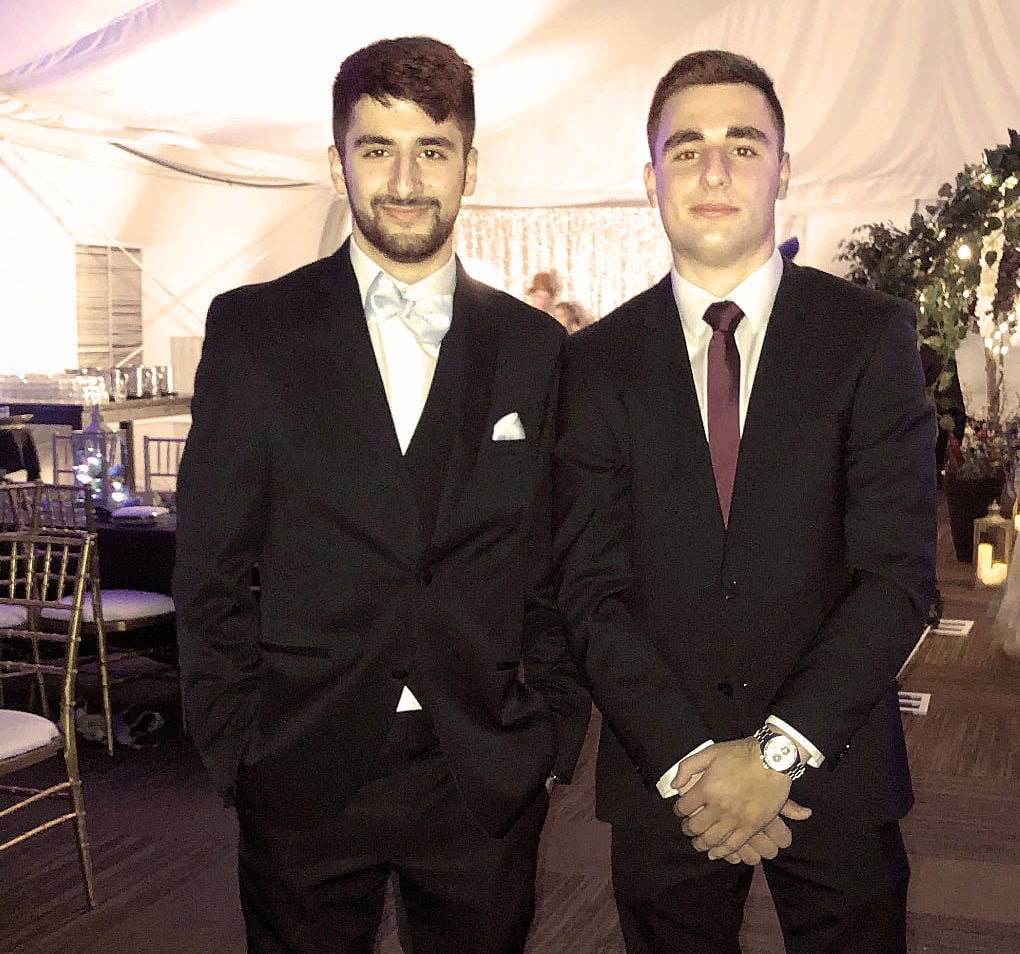 As immigrants, Manoli and Aoleen Stavrulakis are working hard so that their two sons, Chris (left), 19, and Alex, 18, who are students at West Virginia University, will be successful.

Manoli and Aoleen Stavrulakis are well-known in the Charleston business community. Manoli Stavrulakis is from the Island of Crete, in Greece, and his wife, Aoleen, is from Baghdad, Iraq. They came to America in the 1990s.

As immigrants, Manoli and Aoleen Stavrulakis are working hard so that their two sons, Chris (left), 19, and Alex, 18, who are students at West Virginia University, will be successful.

One is from Greece, the other from Iraq. Together, they’ve built a successful life in America and are passing on their wisdom and work ethic to their two college-age sons.

Manoli Stavrulakis, from the Island of Crete, in Greece, and his wife, Aoleen, who is from Baghdad, Iraq, came to America in the 1990s.

As fate would have it, they each wound up in California, where they eventually met, fell in love and got married.

Since 1999, they have called Charleston their home. They are the owners of two popular eateries, Creperi Cafe and Pizza Barbarossa, as well as a bakery called Sokolata.

Coming to the United States, each overcame the inevitable culture shock and periods of loneliness.

Aoleen said the immigrant experience has made her a stronger person inside, while Manoli said the value of honesty and “following the system” are two key things that have helped him thrive in America.

From Greece to West Virginia

Before arriving in America for the first time, Manoli already had a West Virginia connection. His uncles and some first cousins resided in Charleston.

“In 1990, I came the first time as a visitor to visit my family. At the time, I had a couple of uncles here — my mother’s brothers — and my first cousins,” Manoli said.

Before then, those family members would make summer visits back to Greece. Manoli heard their stories of more opportunities in America. They piqued his interest in coming to America and staying.

“We knew something better was going on in America — about life, about schools — everything,” he said.

Before coming to the United States permanently, Manoli owned and operated a seafood restaurant in Crete. When his lease expired, he decided to end that venture and come to America.

Although Manoli had plenty of restaurant experience, he and his family were reluctant to open one in Charleston right away.

“My family didn’t want to take the risk to open a restaurant business, because they owned a body shop business,” he said. “They said, ‘Don’t do anything.’ At that time, I had no money and didn’t know how the system works. And I don’t even speak the language really well.”

At a crossroads six months later, Manoli decided to go to California to visit a friend.

He made the trip west, in part because “I was confused about what I really wanted to do.”

He wound up staying in California for six years, eventually moving to the San Jose area. In California, he found a job working at a restaurant as a server and in the kitchen.

His early days in California were tough because he felt so alone in foreign surroundings.

“I cried like a baby, because I missed my family and I was in a different culture. I was in San Jose and nobody knows nobody.”

One day, his employer invited him to a wedding party, and it was at the party he met his future wife, Aoleen. They fell in love and got married, but the newlyweds realized quickly that California was an expensive place to live when you don’t earn a lot of money.

Manoli worked as a restaurant server and Aoleen worked as a lab technician in a camera store.

“Our income was not good enough to make us stay in California,” Manoli said.

In 1999, Manoli decided to come back to Charleston with Aoleen when Charleston resident and businessman Spiro Stanley offered him a space on Capitol Street in which to open a Greek restaurant.

“That’s the reason I came back, because Spiro Stanley offered me that space on Capitol Street to open a Greek restaurant, Mykonos,” he said.

After operating Mykonos for five years, Manoli decided to try something different. He and Aoleen opened the Creperi Cafe, first in Kanawha City, and later relocated to the Shops at Trace Fork in Southridge. They have since gone on to open Pizza Barbarossa at the Dudley Farms Shopping Plaza, also in Southridge. More recently, they opened a specialty bakery called Sokolata on MacCorkle Avenue in Spring Hill.

They are now firmly rooted in Charleston. They also have two sons, Chris, 19, and Alex, 18, who are students at West Virginia University.

“We want our kids to be successful, to be better than us,” Manoli said. “That’s the point — we work hard for our kids.”

Looking back, Manoli said that when he came to America, it was a challenge for him to adjust.

“For the first years, it was really hard for me. It was the language and how the system works. If you want to be good and successful, you have to follow the system.”

The “system,” he said, means following the rules and having a plan for success.

Manoli said he appreciates the warmth of the people in Charleston. It has made the transition to America easier.

“People understand who you are — who you really are. We feel part of the community, and it took time to do that. We’re happy we’re here. I feel like I’m in my hometown in Greece years ago. I know everybody. Everybody asks how I’m doing, how’s the kids.”

From Baghdad to America

Aoleen Stavrulakis’ gaze softens when she talks about her two sons, Chris and Alex.

When she left Iraq in the mid-1990s, coming to California as a refugee, she couldn’t have foreseen a life in Charleston with a husband and two children.

She and her husband, Manoli, met in California, where they spent their earliest years in the United States.

“I’ve been here since 1996,” Aoleen said, as she prepared for another day at the Creperi Cafe.

By way of Jordan, Bulgaria and then Greece, “I got a visa to America as a refugee,” she said.

A Catholic charity in San Jose helped her get settled and to obtain a green card so she could live and work in the United States.

Aoleen’s first job was at a camera store, where she worked in the photo lab. The camera store that hired her — Wolfe Camera — was her proving ground.

Succeeding in America was important to her, because it had always been her goal to come to the United States.

“Since I was a little kid, it was my dream to come to America,” she said.

Once here, her ability to quickly become self-sufficient boosted her confidence.

“You have to struggle to appreciate life,” she said. “I started from zero. I have the power and the energy inside me. I can make it, I can do it. All that struggle I went through, it gave me such a power inside.”

Coming to Charleston from California was a difficult transition for Aoleen.

“It was a big change in a hard way, a sad way. It took me a long time to adjust to this area. But God gives you the power; I had a lot of faith,” she said.

Like her husband, Aoleen said having goals and plans are important for success.

“It takes a lot of hard work to get where you are. You have to put a plan in your life. Don’t let nothing stop you,” she said.

Aoleen said she’ll never forget her homeland of Iraq. Although she experienced war in her country, she still has fond memories.

“Your country is your country, no matter what — you don’t forget it. It’s inside you and you’ll always have the most beautiful memories,” she said. “Even though we went through a war, it made us stronger.”

She and her husband’s two sons are a great source of love and pride.