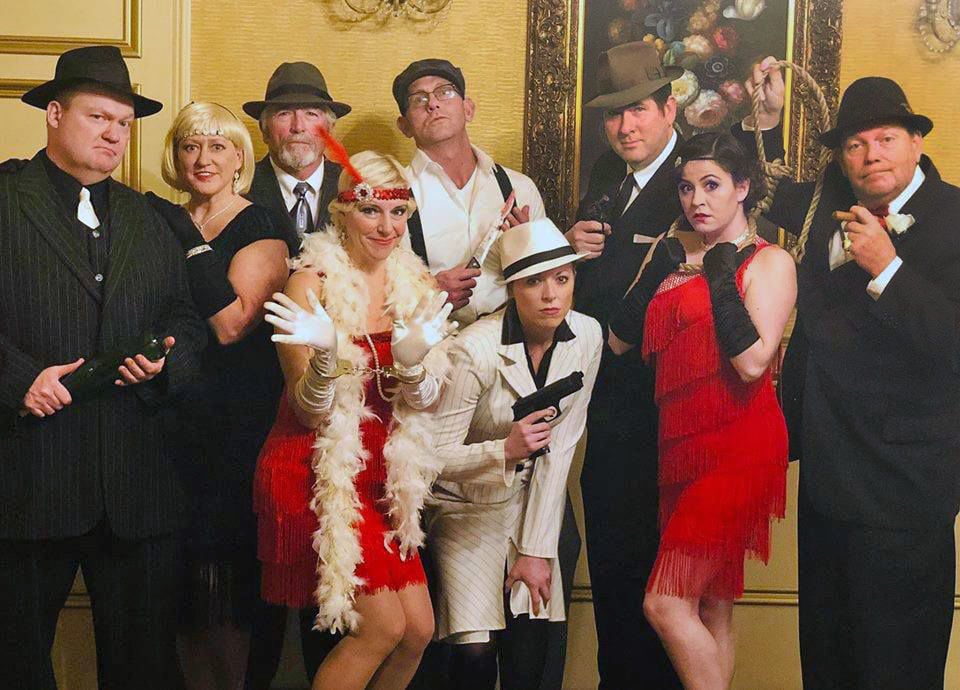 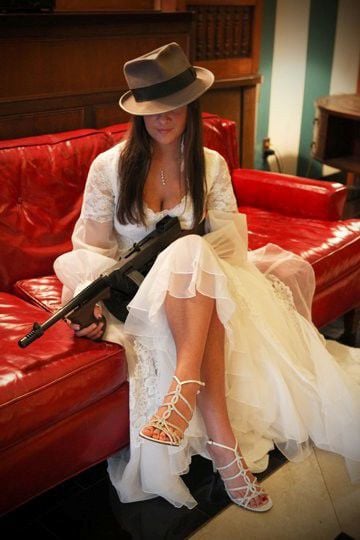 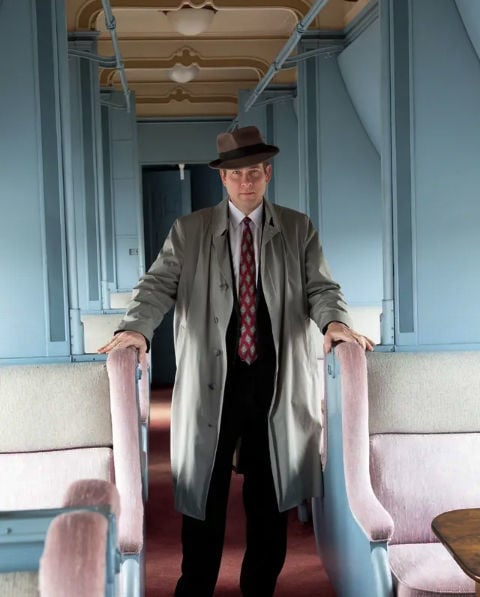 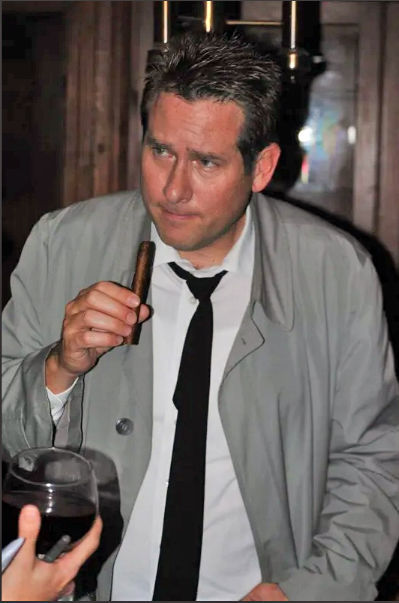 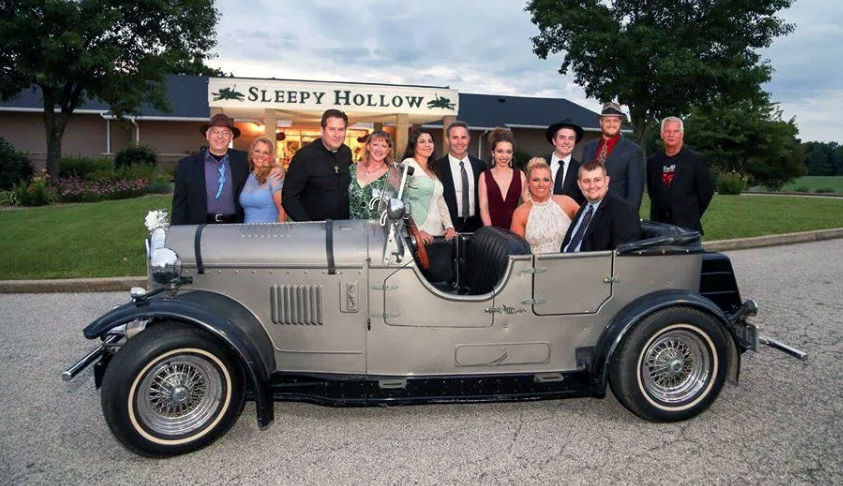 The Murder and Merriment troupe pose next to a vintage automobile for a show at Sleepy Hollow Golf & Country Club in Putnam County. 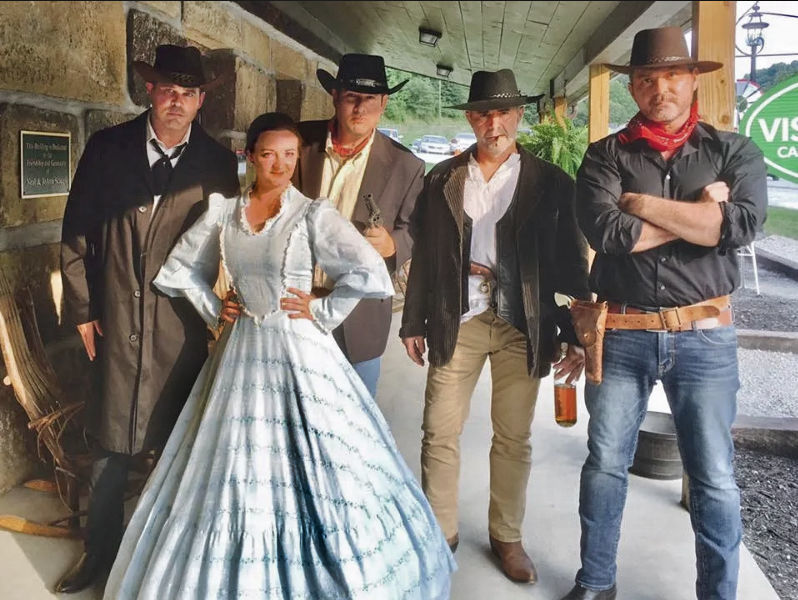 Murder and Merriment also does shows with a western format. Following their success in West Virginia, the troupe has expanded into three companies and is available to perform throughout the state, as well as Ohio and Kentucky.

The Murder and Merriment troupe pose next to a vintage automobile for a show at Sleepy Hollow Golf & Country Club in Putnam County.

Murder and Merriment also does shows with a western format. Following their success in West Virginia, the troupe has expanded into three companies and is available to perform throughout the state, as well as Ohio and Kentucky.

Clueless about how to make your next party or corporate gathering a screaming success?

A memorable social get-together with an interactive, faux-homicidal twist may solve your mystery: specifically, a murder-mystery party performed by an area Murder and Merriment acting troupe.

“So many people love a good mystery,” Murder and Merriment founder, owner and actor George R. Snider III of Scott Depot said, “whether it’s crimes on TV, in movies or books you’re reading. People have loved solving mysteries for hundreds of years.

“Our biggest demographic is women 35 to 65 years old; that correlates to those who sit and watch ‘Law and Order,’ ‘CSI,’ things like that,” he said.

Snider said Murder and Merriment offers 52 different murder mysteries for its travel performances. The shows run an average of two hours, he added, but they can be shortened or lengthened as requested.

The mysteries go by names such as “Music, Murder & Mayhem,” “The Murdered Mistress” and “Belles, Bourbon & Belladonna.”

Snider said there is usually more than a modicum of mirth amid the “murder” scenarios playing out for the audiences, providing some tongue-in-cheekiness to complement the cloak-and-dagger foul play unfolding on stage.

“We’re called Murder and Merriment, so a great deal of our shows offer some comedy. It’s lighthearted and fun. We want to entertain our guests and want them to come and have a good time with their friends and be able to escape from some of the things that are going on in their daily lives for a couple of hours and enjoy themselves,” he said.

“Our business in West Virginia exploded,” Snider said. “I never thought it would grow to what it is today.”

As bookings grew, Murder and Merriment expanded into three companies that can perform private parties throughout the region: the one that began in West Virginia nine years ago; a Lexington, Kentucky, group; and an Ohio ensemble that formed in Cincinnati last year. They are available to perform throughout West Virginia, Virginia, Ohio and Kentucky. “We even performed in New York once,” Snider noted.

Claire Butler of Charleston became involved as an actor in Murder and Merriment through her connections in local theater. “One of the things I like most about Murder and Merriment is that all of the scripts George does, he has written himself. They’re all original concepts. It’s not your cookie cutter, out-of-a-box mystery. George puts a lot of work and effort into the characters and the relationships among the characters, making sure all of them have a backstory that flows with how it goes.

“It’s scripted improv,” Butler said, “and it’s fun watching the audiences become so fully engrossed in the people on stage and some of the questions they ask us.”

Butler said her most recent Murder and Merriment performance occurred over Thanksgiving at The Greenbrier, with a family having its reunion at the resort attending the show.

“The audience was all ages, kids and adults,” she said. “It was amazing to watch the kids get so fully involved in asking questions and wanting to know more and wanting to fully participate instead of just coloring their menus and staring at the walls. It made it much more fun for us actors.

“You kind of have to experience it to learn what it’s all about, but it’s a great thing to try to do with your friends or with a group,” Butler said.

Elizabeth Cary Brown has performed intermittently with Murder and Merriment over the past five years and relishes the intrinsic unpredictability of every show.

“I enjoy it because every show is different, even if you perform the same mystery,” the Charleston resident said. “Even the cast doesn’t know who the killer or the victim is until about 30 minutes before the show.

“The audience also gets to interact with the cast,” Brown said, “which is different from performing on stage. It makes every show unique and challenging. Different crowds ask different questions and have their own sense of humor, so it really keeps you on your toes.

“I also enjoy the flexible schedule, because we can study our players’ manuals on our own time without spending hours in rehearsal like we do for a staged show,” Brown said. “The people are wonderful to work with as well. It’s a lot of fun performing with different actors in different venues, which also adds variety to each show. You never get bored, because you never know what’s coming next.”

An actor since age 6, Snider formed Murder and Merriment after being approached by businesses in Huntington. “Heritage Station shop owners came to me in 2010 and asked for entertainment ideas. There was nothing in Huntington at all like this,” he said. He came up with the idea for an interactive theater troupe by drawing on his love of old detective shows and Agatha Christie mysteries. He was also inspired by improvisational pieces he and friends performed at their own dinner parties.

Snider mentioned Columbo, the TV detective played by Peter Falk, as a particular favorite. “One of the arsenal of characters I play is Detective Columbus,” he said. “When I play that character, I’m definitely channeling Peter Falk.”

Another inspiration was the ’70s TV series “Ellery Queen,” based on the fictional character of the same name. In that series, the detective would break the fourth wall and speak directly to viewers during the final reveal. “That’s the technique we use,” Snider said. “During the final scene when we bring all the suspects in together, we speak directly to the audience and review the clues.”

The success of the movie “Knives Out,” now playing in theaters, shows how audiences never tire of a good whodunit, Snider said. In that film, Daniel Craig plays debonair private investigator Benoit Blanc, who’s out to solve a crime at a mystery writer’s estate. All the family members plus a nurse are suspects.

Unlike some actors — and detectives — Snider has a day job working as a Medicare consultant with Humana. “I’m only in the murder business at night and weekends,” he said, chuckling.

“I’m excited to see what 2020 holds for us,” he added. Snider’s hope is that the coming decade will have the same spirit as the Roaring Twenties of the last century. Murder and Merriment has a show, “Prohibition Murder,” set during that colorful time period.

Upcoming West Virginia shows include an appearance at The Greenbrier in White Sulphur Springs Jan. 11, a performance at Hawks Nest State Park Lodge Jan. 18 and a show at the Woman’s Club of South Charleston Feb. 7. Ticket prices vary according to venue, but generally run from $35 to $75.

Venues where the troupe has performed interactive murder mysteries include private homes, resorts, restaurants, trains, riverboats, theaters, casinos, state parks, banquet halls, wineries, libraries, churches and various business locations. Hosting a mystery can also be “a fun and profitable way for an organization to raise funds,” according to the group’s website.

For additional information about scheduling the group for a performance and to investigate the murder mystery shows and packages available for booking, call 304-634-8581 or visit the website, murderandmerriment.com.

Live theater is, arguably, one of the purest forms of entertainment. I am constantly in awe as I watch individuals far more talented than I br…