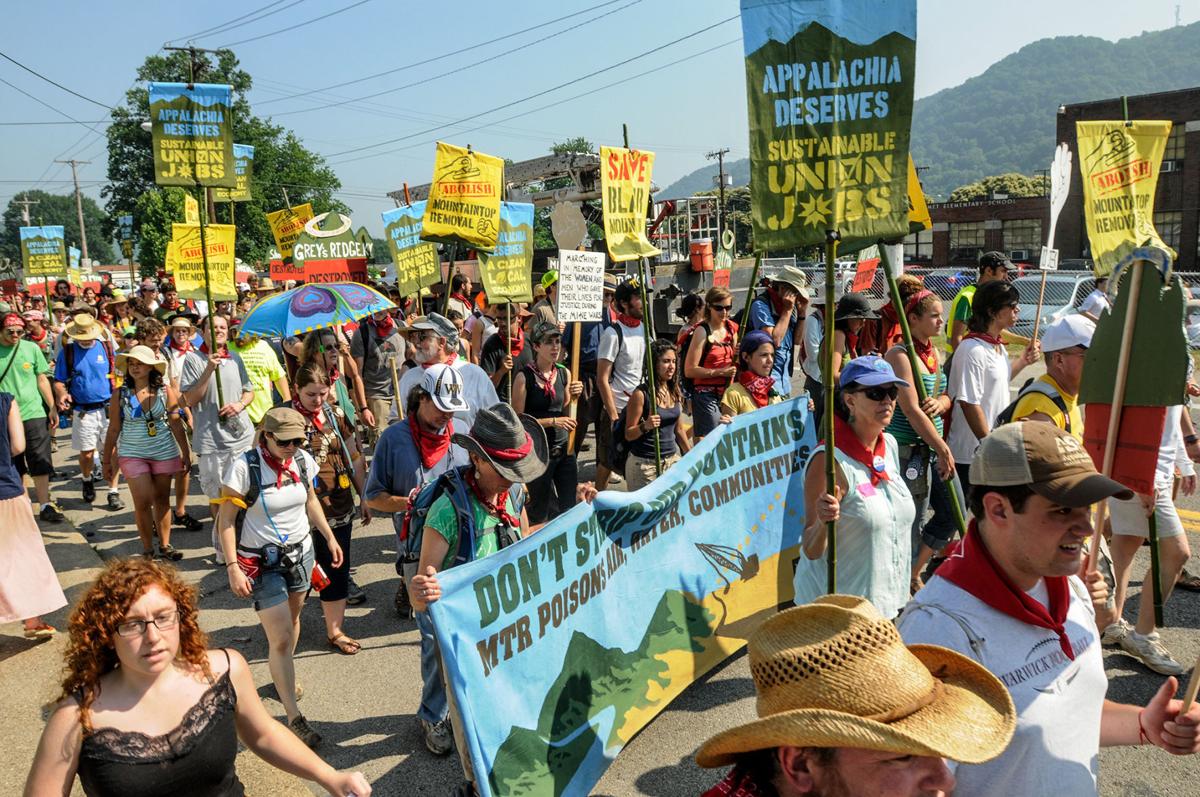 Marchers on their way to Racine during the June, 2011, protest to save Blair Mountain. 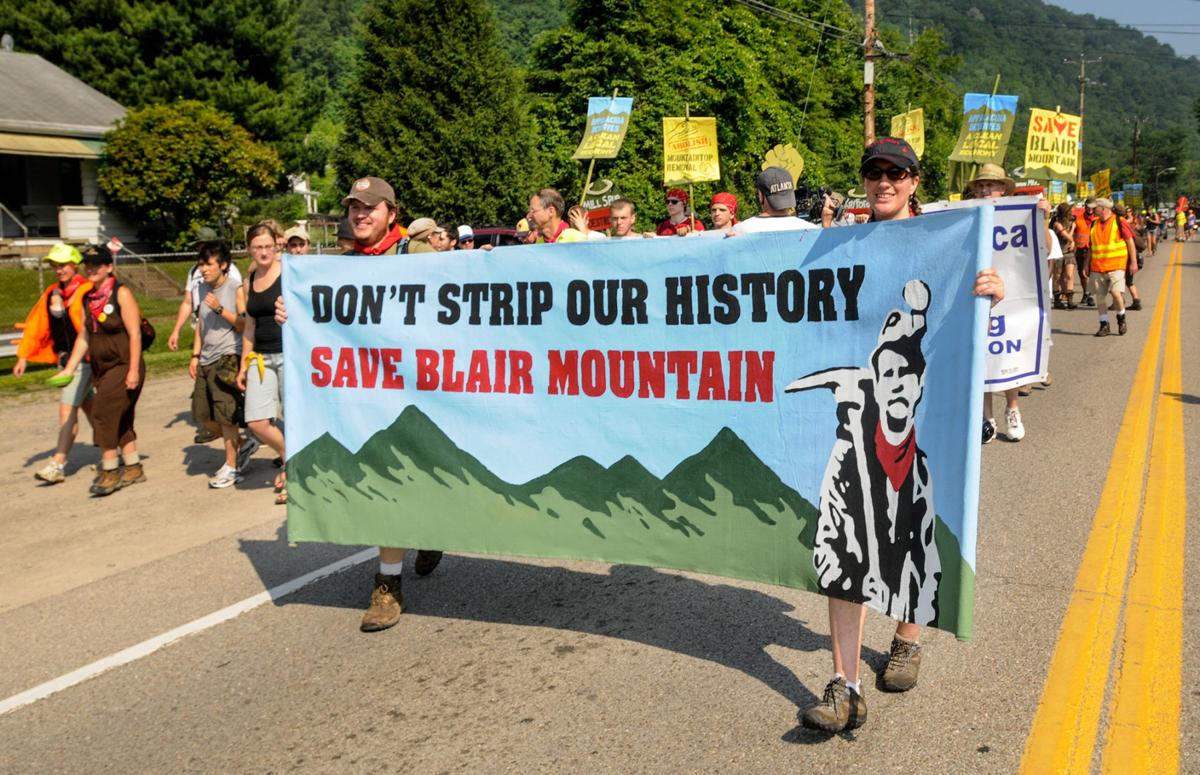 Marchers walk through Marmet on their way to Racine in the June 2011 protest march.

Protestors rally and listen to speeches at the Marmet baseball park on June 6, 2011, before beginning their walk to Blair. At the time, mountaintop removal posed a threat to Blair Mountain. 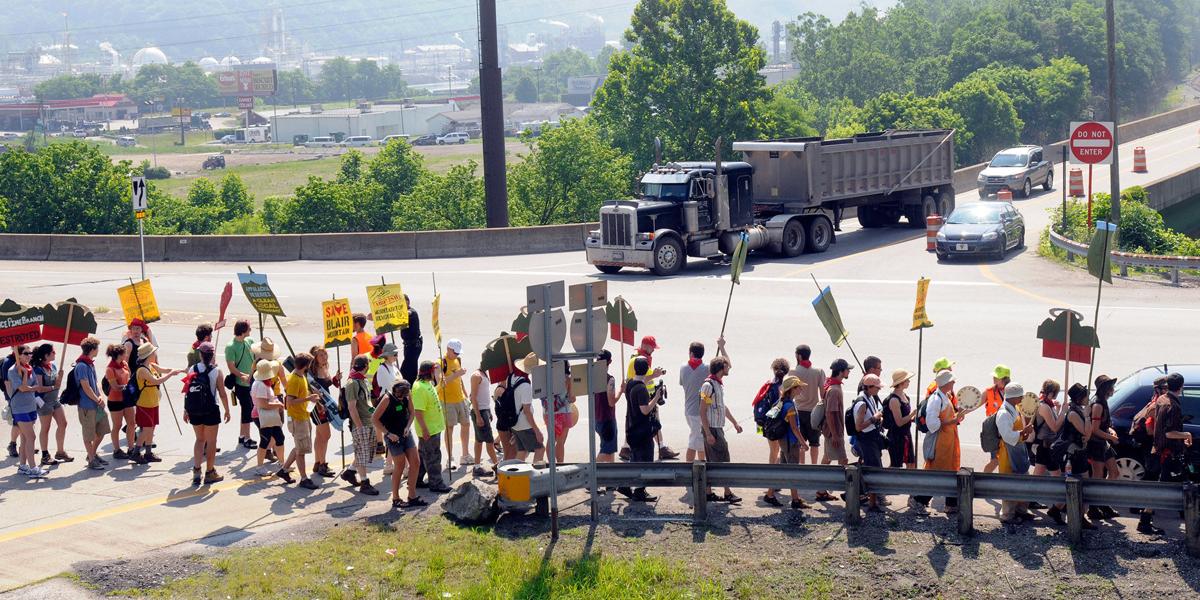 “Save Blair Mountain” protestors pass the turnpike ramp on W.Va. Route 94 as they walk towards Racine in the June 2011 march. 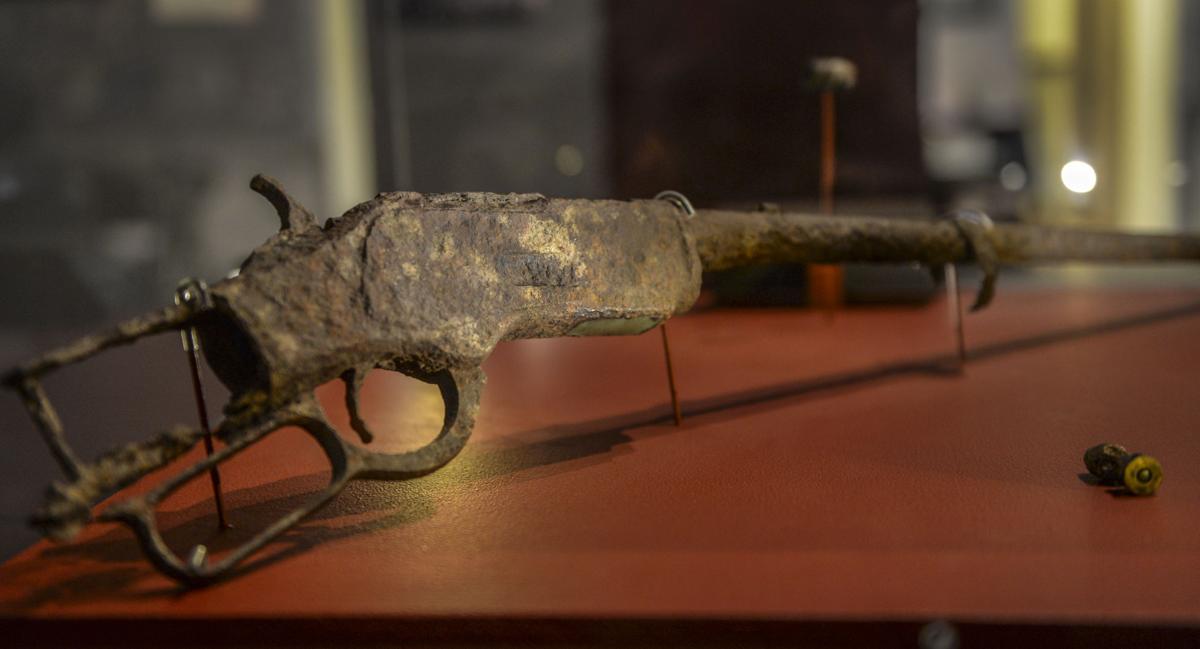 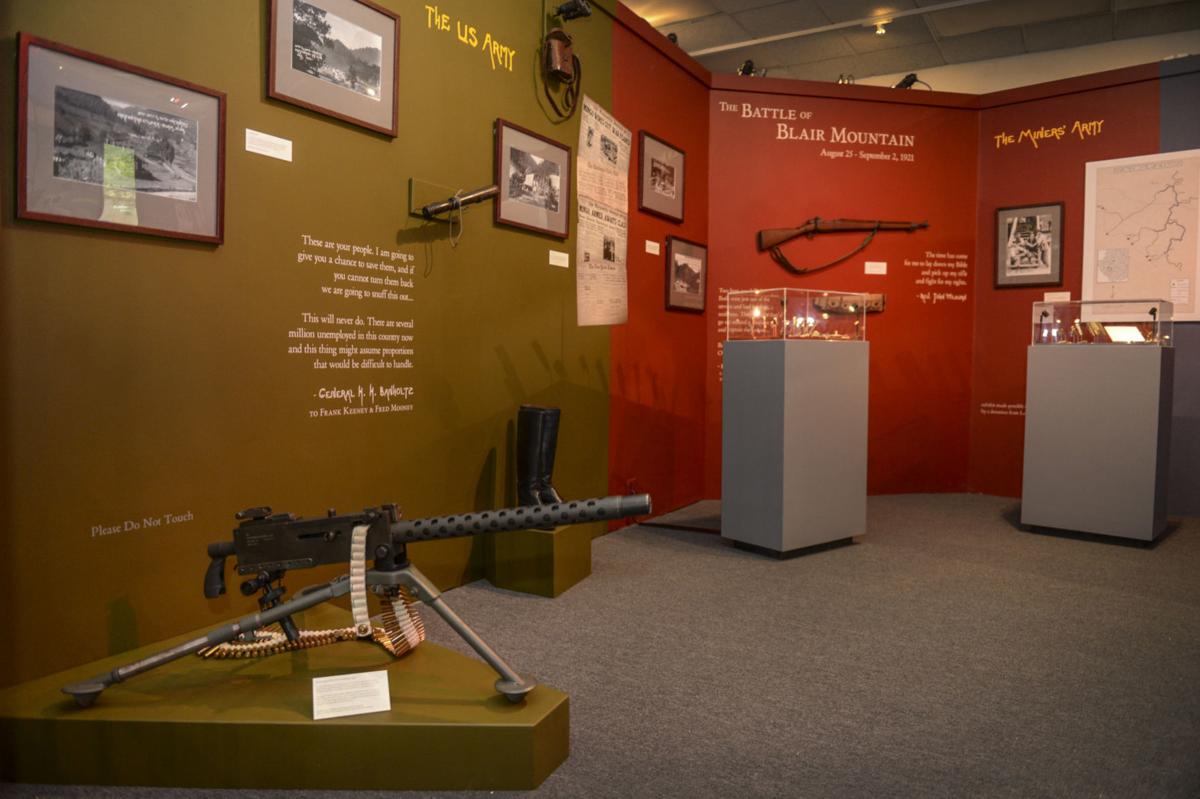 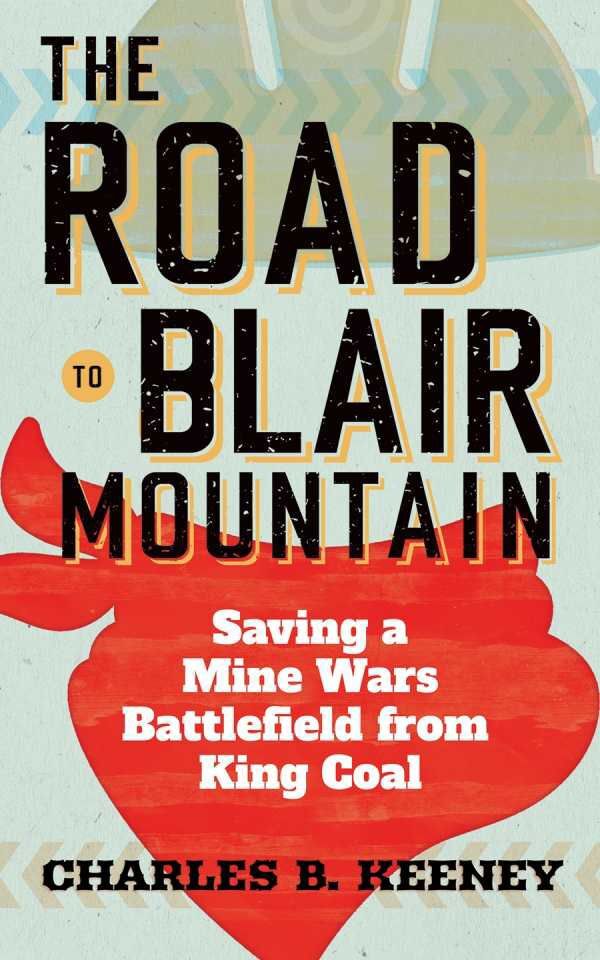 Marchers on their way to Racine during the June, 2011, protest to save Blair Mountain.

Protestors rally and listen to speeches at the Marmet baseball park on June 6, 2011, before beginning their walk to Blair. At the time, mountaintop removal posed a threat to Blair Mountain.

“Save Blair Mountain” protestors pass the turnpike ramp on W.Va. Route 94 as they walk towards Racine in the June 2011 march.

The first Battle of Blair Mountain in 1921 was a bloody chapter in Appalachian history. The armed uprising of miners against coal barons and anti-union lawmen lasted five days, beginning with scattered skirmishes and ending with three days of heavy fighting.

The Second Battle of Blair Mountain lasted nine years, and was a different kind of conflict. It’s this second battle that historian Charles B. Keeney focuses on in his book, “The Road to Blair Mountain,” recently published by West Virginia University Press.

The book details the efforts to get Blair Mountain listed on the National Register of Historic Places, considered essential to preserve the 100-year-old battlefield from surface mining by coal companies.

The story is a complex one, with many twists and turns. The mountain was listed briefly on the National Register in 2009, only to be removed months later. A grassroots organization, Friends of Blair Mountain, formed a coalition with environmental groups, took legal action and launched a campaign to raise public awareness.

The book gives a blow-by-blow account of the struggles and setbacks of the effort, which finally paid off when a U.S. district judge ruled in the coalition’s favor, and Joy Beasley, National Park Services Keeper of the Register, placed Blair Mountain back on the national list in 2018 as a protected, historic site.

Keeney, who has served as president of Friends of Blair Mountain, has deep family ties with Blair Mountain and the West Virginia Mine Wars. His great-grandfather, Frank Keeney, was president of the United Mine Workers union’s District 17 during the 1921 uprising. His fiery speeches kept the union spirit alive, and he helped organize the “Red Neck Army” as it was called because of the red bandannas the miners wore.

Eventually, Chuck Keeney learned more about the Battle of Blair Mountain and his family’s role in it.

In late August of 1921, thousands of armed coal miners (estimates vary from 7,000 to 10,000) gathered at Marmet and began a trek south through the coalfields. The goal was to relieve families who were being terrorized by private mine guards hired by the coal companies.

Hostilities broke out in Logan County, an anti-union stronghold, where some 3,000 men led by the county sheriff and state police were entrenched on Blair Mountain. This militia set up machine gun nests along the ridgeline and fired down on the advancing miners.

The standoff ended when federal troops arrived on Sept. 2. The miners either surrendered or dispersed. Casualties are unknown; estimates range from as few as 20 killed to as many as 100. The miners followed a code of silence afterwards, and participants left no written accounts. Frank Keeney and other union leaders spent several months in a Logan County jail. Some miners were imprisoned.

Early in his book, Keeney tells the story of Kenny King, a grandson of a miner who fought at Blair Mountain. King began exploring the battlefield in the 1990s looking for relics. Using a metal detector, he found hundreds of shell casings, buried guns and other artifacts. “He had found an archaeological gold mine,” writes Keeney, one that told a “forgotten chapter in American history.”

At the same time, at least three surface mine permits threatened the battlefield. Mountaintop removal mining is a type of surface mining where coal seams are extracted by first removing the land above the seams. If mining took place, Blair Mountain would be razed, any remaining archaeological artifacts destroyed.

Keeney chronicles the beginnings of the movement to save Blair Mountain. On March 9, 2011, organizers held a press conference to announce a protest march that — like the Red Neck Army 100 years ago — would begin outside Charleston and end at Blair Mountain. Keeney was one of the speakers at the conference, along with former U.S. Congressman Ken Hechler.

The march took place June 6-11, with the numbers of participants fluctuating from about 250 to 275 along the way. On Saturday, the final day, an estimated 1,100 people attended the rally at Blair.

The protest received a lot of media attention, both local and national. But organizers knew it was just a first step. Further efforts to save the mountain were necessary. Years of work lay ahead.

While progress on preserving Blair Mountain was frustratingly slow, another project got off the ground relatively quickly. Keeney and others stressed the need for a museum devoted to the region’s history. The Mine Wars Museum opened at Matewan in 2015.

The museum consists of artifacts and exhibits that tell the story of labor and West Virginia’s mine wars. There are replicas of the guns used by both sides, and a replica tent of the type miners and their families lived in during strikes. The original location was in a former hardware store on the street where the infamous shootout occurred in 1920 between Matewan Chief of Police Sid Hatfield and Baldwin-Felts detectives.

In 2020, the museum moved to a larger location at the old Matewan National Bank on the same street.

“Many aspects of contemporary life in Appalachia reflect the consequences of erased history,” Keeney wrote in the preface to his book. To him and other historians, this absence of knowledge can be dangerous. What West Virginians choose to remember, and what they choose to forget, can make a difference in society, culture and politics.

The Second Battle of Blair Mountain has kept the mountain from becoming erased history. What its preservation will mean to future generations remains to be seen.

Whatever happens, the mountain will be there, indifferent to the warring over its fate, a silent witness to the blood shed on its slopes 100 years ago.

Due to the COVID-19 pandemic, the Mine Wars Museum has only been open for guided tours by appointment. Plans are to reopen to the public April 16 on Fridays and Saturdays. For the latest information, go to wvminewars.org. Robert Saunders can be reached at bsaunders@hdmediallc.com.

Charles Keeney: 'You have to find alternative ways to win'

DMWV: In your book, you mention how the goals of your group, Friends of Blair Mountain, did not always coincide with those of environmental gr…

55 in 55: Berkeley County, an unlikely place for African tribal art to be bought

PHOTOS: Backpack Attack back at it