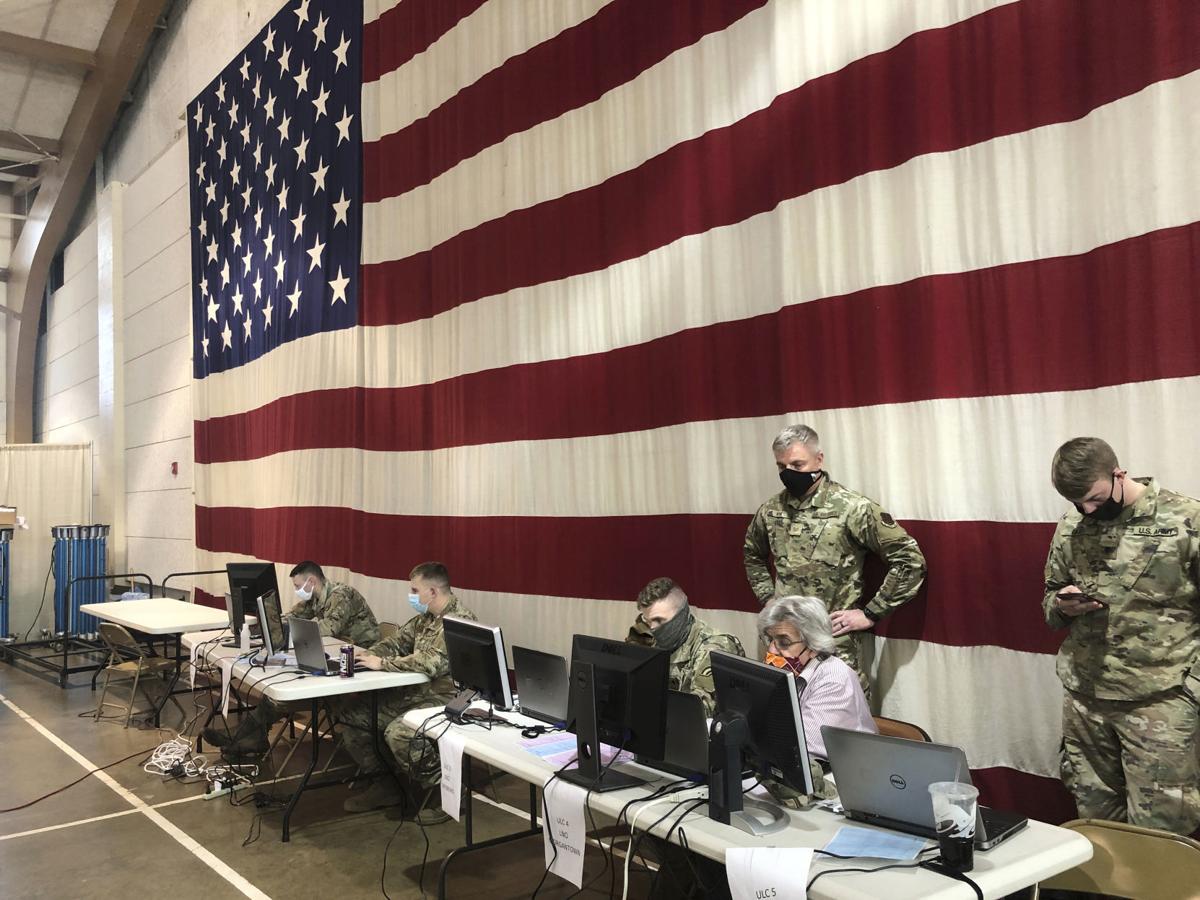 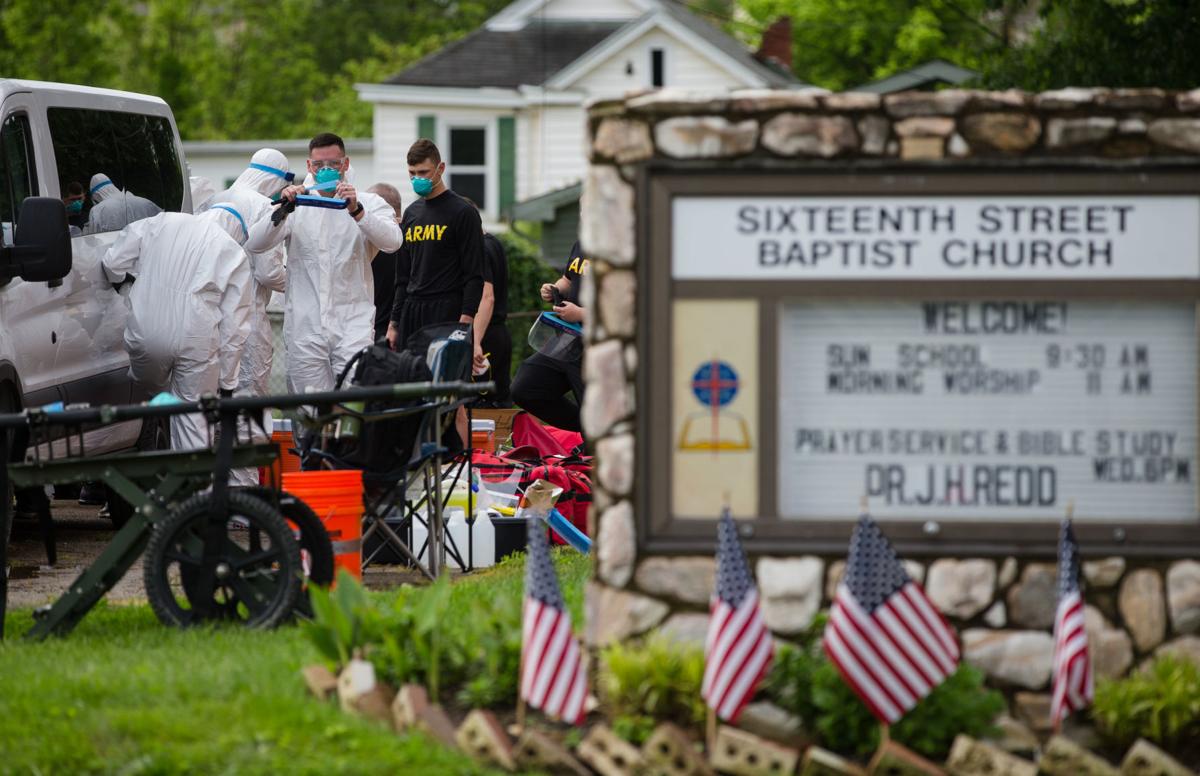 Members of the West Virginia National Guard prepare for the opening of a free COVID-19 drive-thru testing site on May 22, 2020, outside Sixteenth Street Baptist Church in Huntington. 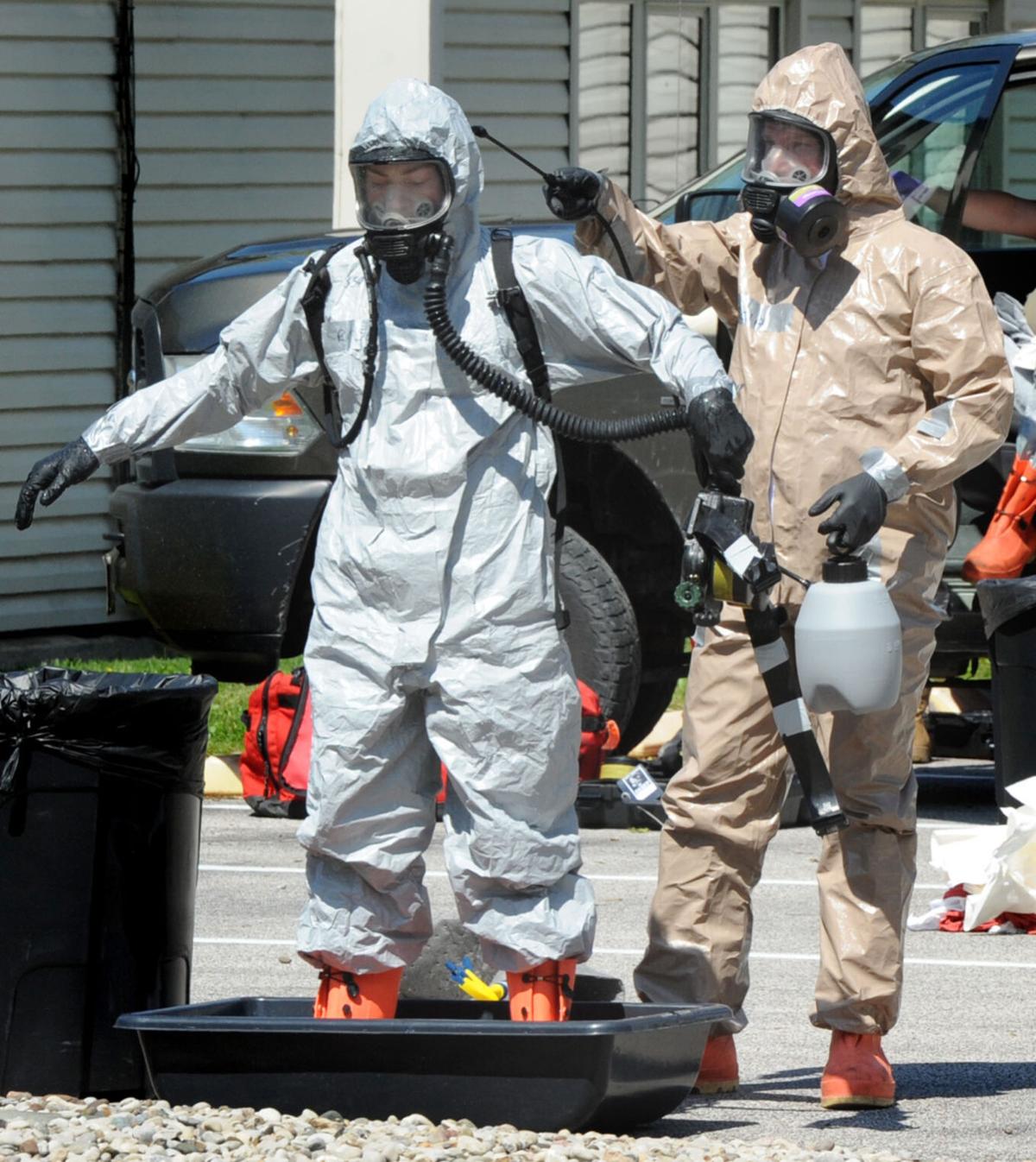 A West Virginia National Guard member is decontaminated by a fellow guardsman after exiting the Riverside Health and Rehabilitation Center on April 15, 2020, where residents and staff were getting tested for the coronavirus. 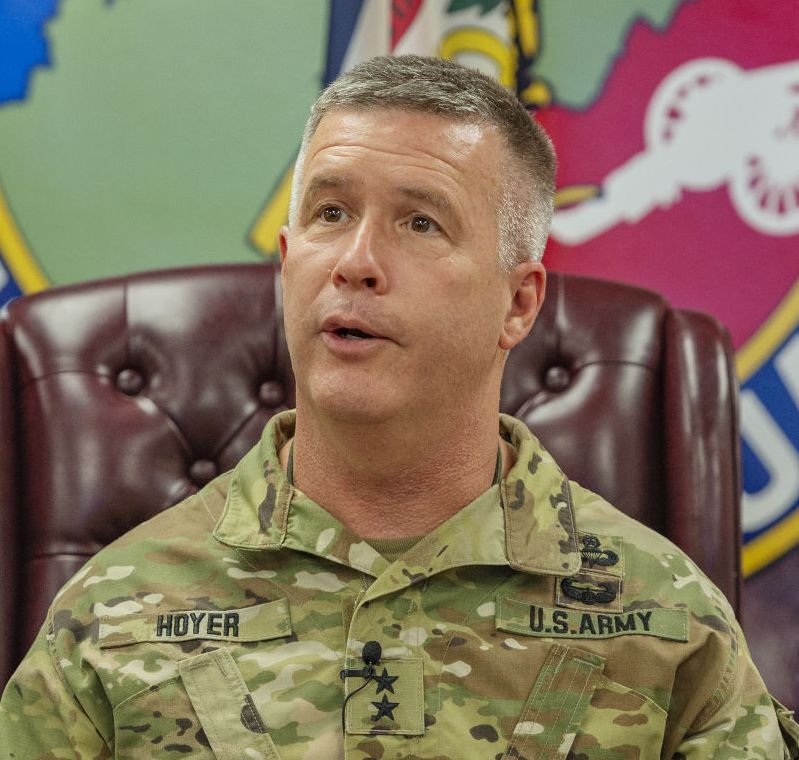 Members of the West Virginia National Guard prepare for the opening of a free COVID-19 drive-thru testing site on May 22, 2020, outside Sixteenth Street Baptist Church in Huntington.

A West Virginia National Guard member is decontaminated by a fellow guardsman after exiting the Riverside Health and Rehabilitation Center on April 15, 2020, where residents and staff were getting tested for the coronavirus.

But by mid-January, some very good news started coming from West Virginia: Somehow the Mountain State was putting 81% of its available vaccines into the arms of its citizens while bigger states struggled to distribute even half of their available vaccines.

The numbers have only gotten more impressive. As of this week, the state has administered 95% of its available vaccines.

As national media descended on the state to figure out why, much of the reporting focused on the state’s decision to distribute vaccines through local pharmacies, bucking the federal plan to use the national chains CVS and Walgreens.

That isn’t the whole story of West Virginia’s vaccine triumph, however. The state’s path to success started long before there was a thing called COVID-19, much less a vaccine to fight it, and was grounded in the state’s unique response to a series of tragic disasters. One that may be hard for other states to replicate.

It’s a simple idea borrowed from the world of military strategy: Bring anyone involved in an operation to the same table, so everyone can share information and coordinate their efforts. This particular task force would be made up of federal, state and local government agencies, the West Virginia National Guard, and groups representing hospitals, pharmacies and nursing homes.

“We took the construct of what the military does in operations, mission planning, and we applied it with our public health partners. We operationalized a public health emergency,” said Maj. Gen. James Hoyer, who serves as director of the COVID-19 task force.

Hoyer, who recently retired from the military after 40 years in uniform, has participated in several joint interagency task forces during that time, because West Virginia has suffered an extraordinary run of bad luck over the past decade.

In June 2012, a violent windstorm ripped through the state, cutting off electricity to more than 680,000 residents — almost a third of the state’s population — and killing three people. In October of the same year, an Arctic cold front collided with remnants of Hurricane Sandy, dumping feet of heavy, wet snow on West Virginia, again knocking out power to thousands of residents and killing seven West Virginians.

In 2014, a leak at a chemical storage facility in the capital city of Charleston contaminated the water supply and left nearly 300,000 people without water for five days.

In 2016, the state suffered a 100-year flood, which destroyed thousands of homes, businesses and schools and killed 23 people.

Though each of these tragedies presented unique challenges, the state approached them all the same way: with a task force featuring all the necessary players, from the Federal Emergency Management Agency down to local volunteer organizations.

It was only natural to set one up for West Virginia’s COVID-19 response.

Hoyer said the strategy seems to work especially well in West Virginia. “We’re just small enough that we know everybody,” he said.

“Working together, not having a lot of egos in the room, not having a lot of problems with who’s controlling what ... I feel like we have worked as a single team,” he said. “It’s the Truman-ism: ‘It’s amazing what can happen when you don’t worry about who gets the credit.’”

Once the COVID-19 task force was up and moving, members began daily meetings at the West Virginia National Guard Armory in Charleston. Even as everything from birthday parties to awards shows went virtual, members of the task force continued meeting in person — with lots of masks, plexiglass and social distancing, of course.

Hoyer, who stayed on as director of the task force after retiring from the National Guard in January, says this face-to-face connection is essential. It allows task force members to communicate quickly and effectively. It allows everyone to remain up to speed on the latest data about the state’s COVID-19 cases, hospitalization rates and vaccination numbers — information that is constantly updated on the projector screens and TVs that dot the armory’s drill floor.

Seeing one another in person allows the task force to act quickly and decisively, and has allowed members to address the lockdowns, school closures, mask mandates and other COVID-19 prevention measures West Virginia has used over the last year. It’s also how, in December 2020, the state was able to quickly assemble its own vaccine distribution plan.

Capehart and Wright realized that, of over 200 pharmacies across West Virginia, half are locally owned. Many of those pharmacies had existing relationships with the nursing homes in their communities. They compared this with the federal vaccine distribution plan and its reliance on CVS and Walgreens stores, which do not exist in many of West Virginia’s rural counties.

It was clear to Capehart and Wright that their state would need to go its own way. The rest of the task force agreed and took the plan to the governor.

“I recall him looking me in the eye and saying, ‘This is what you guys believe is the way we’re going to get this done best?’” Hoyer said. “And as a group we all said, ‘This is it.’”

Pharmacies hit the ground running when West Virginia received its first batch of vaccines on Dec. 15. By the end of January, the state had finished vaccinating all its nursing home residents and staff, as well as a significant number of other health care workers, emergency personnel and teachers. With that completed, West Virginia began the next phase of vaccine distribution, focused on citizens ages 65 and up.

As West Virginia entered this phase of vaccine distribution, the state’s joint interagency task force rolled out its next innovation — vaccine clinics in all 55 counties. Each county set up its own task force with the local health department, emergency services, community health centers, hospitals, pharmacies and other essential players.

Deborah Koester, who serves on the state task force as a liaison for local health departments, says creating these local groups was as essential to vaccine distribution as the state task force has been. “Each of the 55 counties is so unique, it’s going to look a little bit different, and that’s OK. They know their communities the best,” she said.

The only major impediment West Virginia has faced in its vaccine rollout is the lack of supply. The state receives 23,600 initial doses of the Moderna and Pfizer vaccine each week. Hoyer says the state could easily distribute 125,000 vaccines a week, which would have everyone in the state over the age of 65 vaccinated in a matter of weeks.

Hoyer said in the same way previous disasters have prepared West Virginia to respond to the COVID-19 pandemic, he hopes this pandemic will serve as a learning experience for future events.

“I think, unfortunately, we’re going to have something else like this in my lifetime,” he said. “The better prepared we are, the less impact it has on our people.”

This story originally appeared in The Guardian.

Zack Harold is a freelance writer and radio producer in Charleston, West Virginia. He is a regular contributor for West Virginia Public Broadcasting’s Inside Appalachia and formerly served as the Charleston Daily Mail’s entertainment editor and managing editor for WV Living, Wonderful West Virginia and WV Focus magazines.

Scramble on for new fuel routes after Colonial Pipeline hack

New program to attract workers to Charleston gets 60 applicants

The Food Guy: Shoney’s has reopened, which is apparently big news