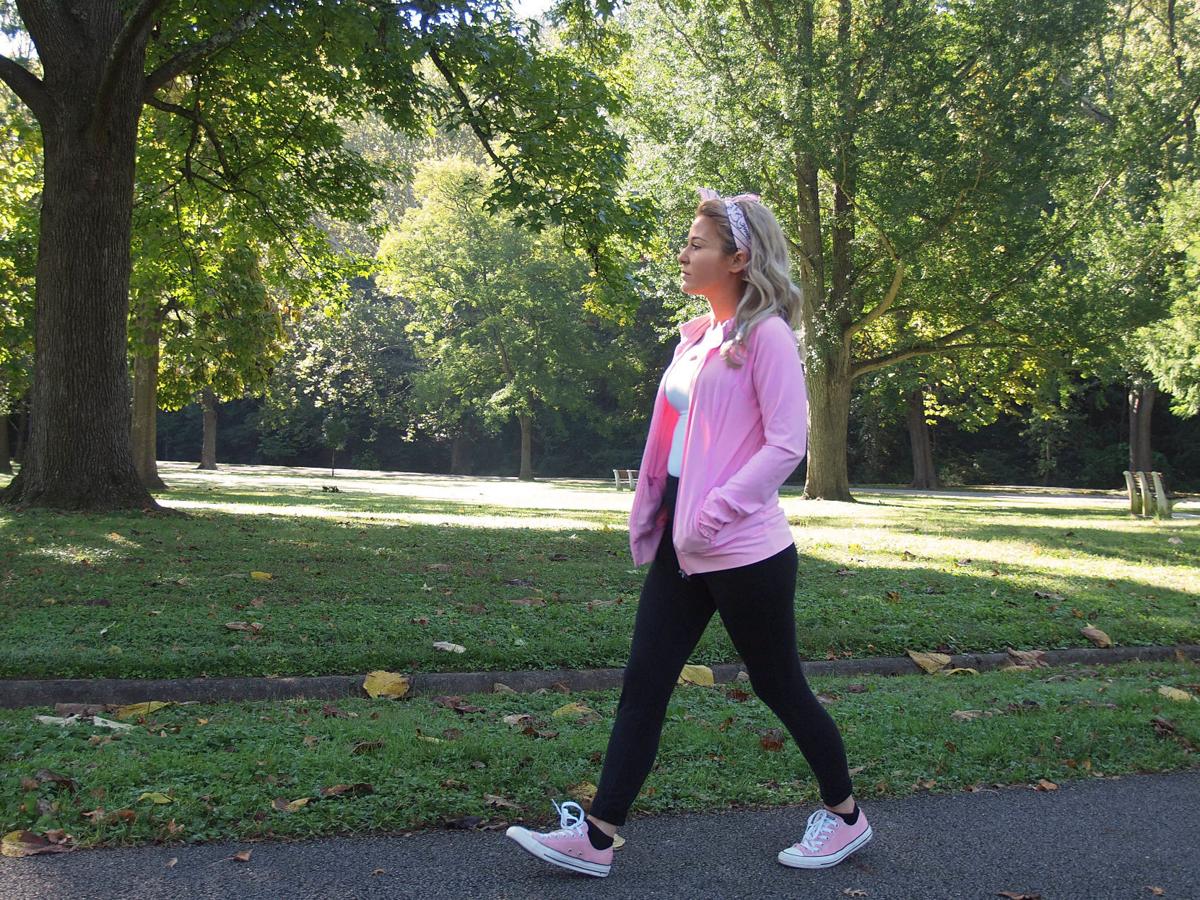 Sade Michael was diagnosed with invasive ductal carcinoma in July. Health professionals and online support groups have helped her decide on treatment options as she faces the future. 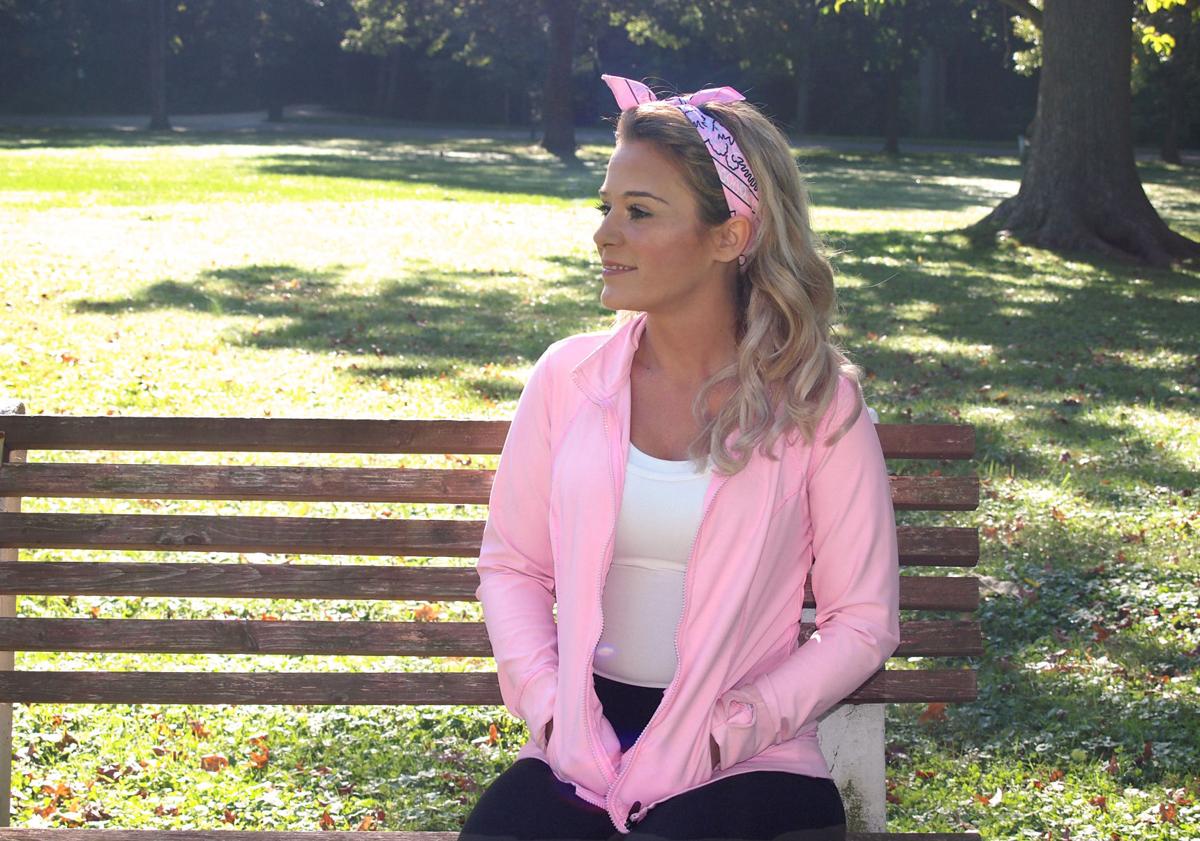 “I didn’t think it was anything but maybe a cyst or something,” Sade Michael said, reflecting on her diagnosis. “I think it is really important to do self-check exams and listen to your body if you know something’s not right.” 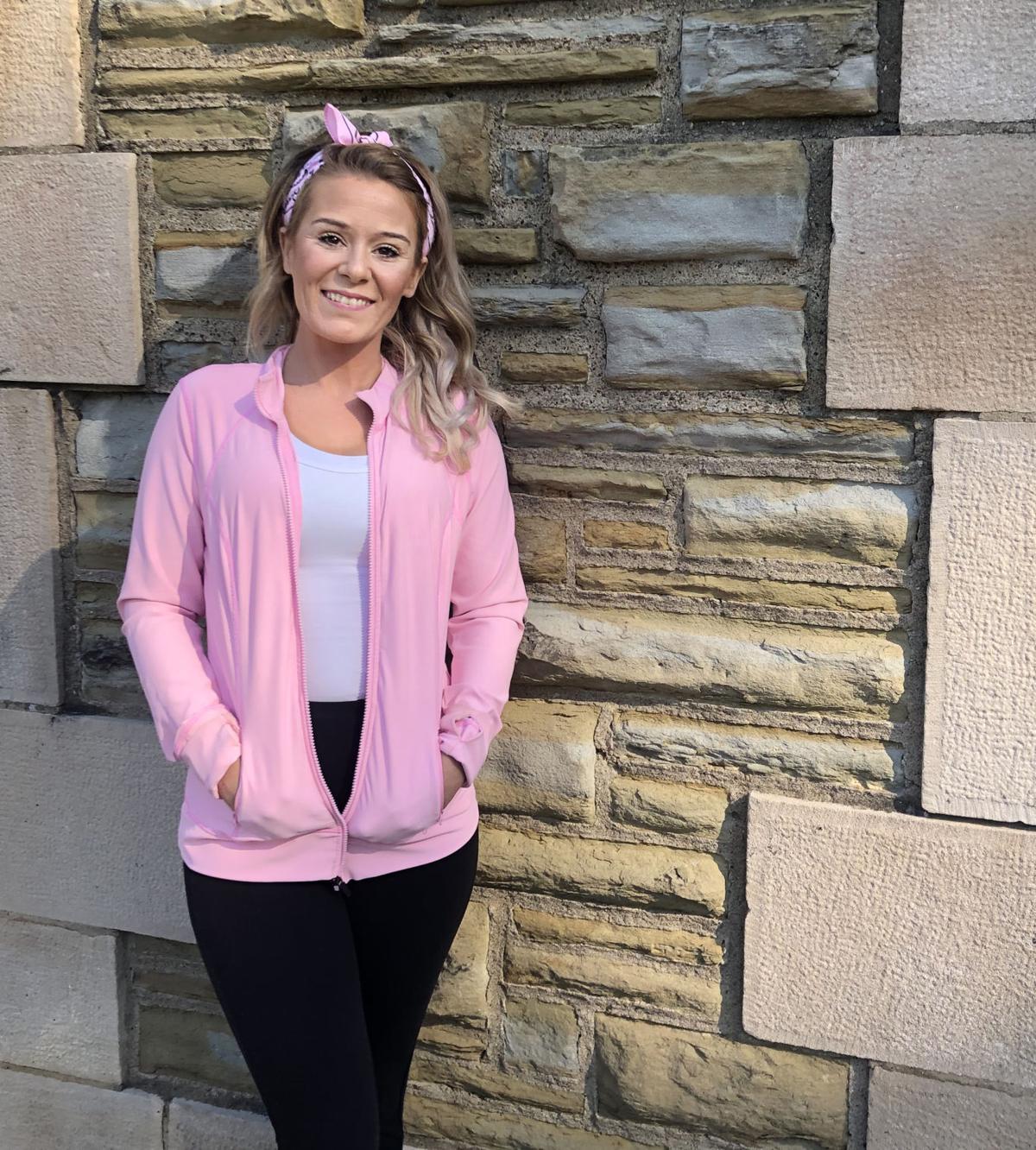 Sade Michael has been sharing her story with others who may be facing a similar journey. “I am on Facebook if there’s anyone else going through this and would like to reach out to me as well,” she said. 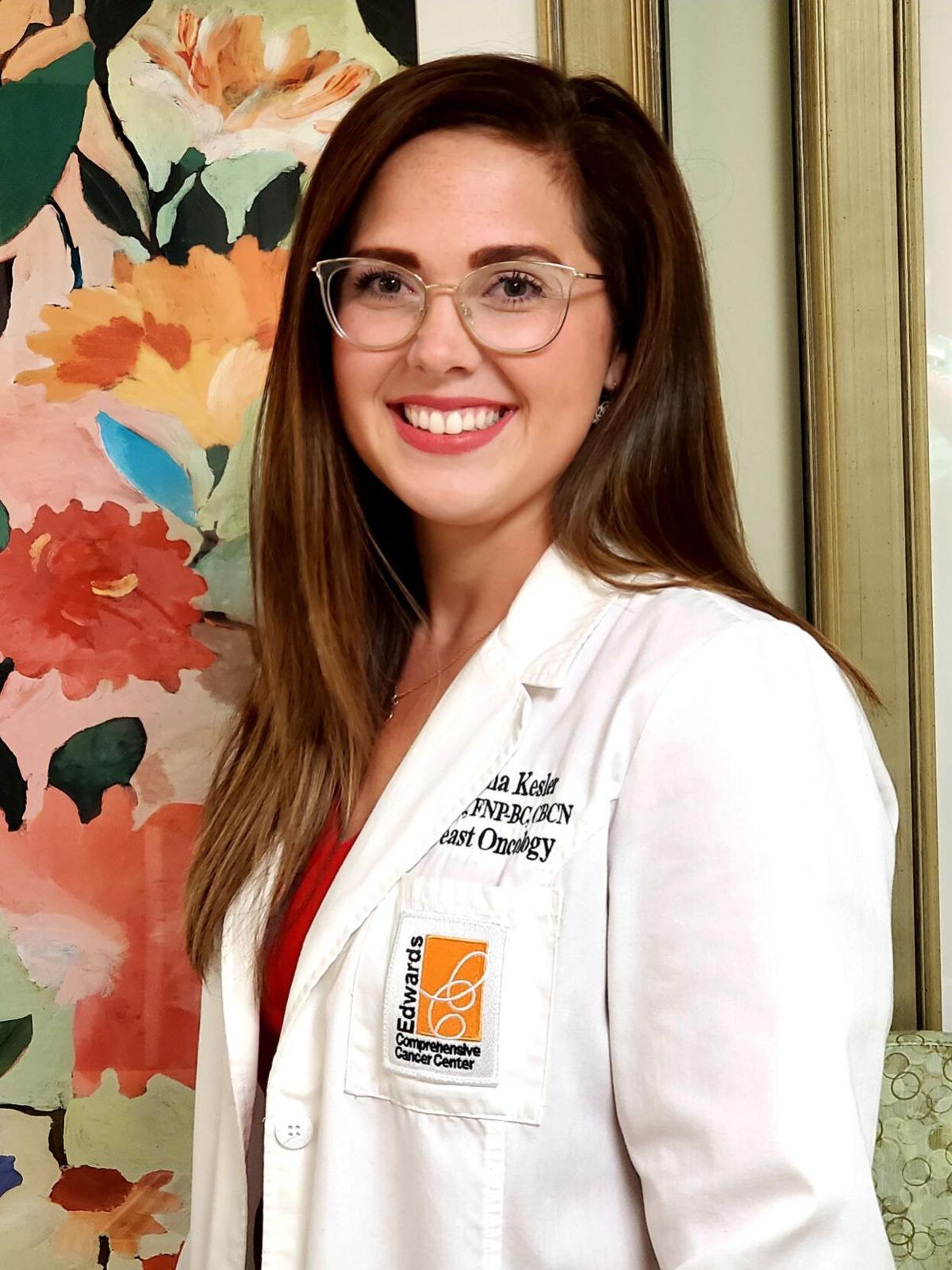 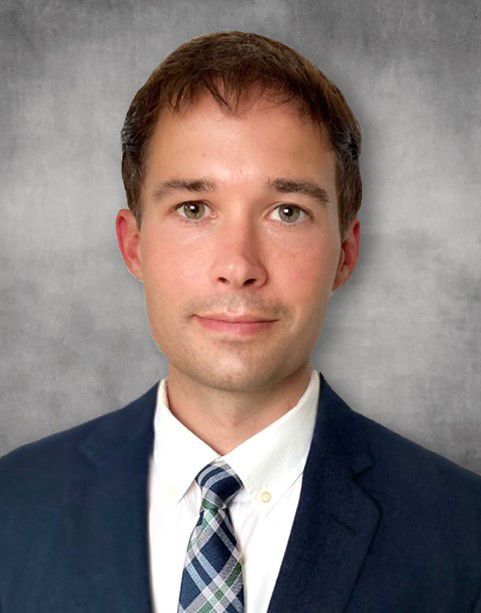 Sade Michael was diagnosed with invasive ductal carcinoma in July. Health professionals and online support groups have helped her decide on treatment options as she faces the future.

“I didn’t think it was anything but maybe a cyst or something,” Sade Michael said, reflecting on her diagnosis. “I think it is really important to do self-check exams and listen to your body if you know something’s not right.”

Sade Michael has been sharing her story with others who may be facing a similar journey. “I am on Facebook if there’s anyone else going through this and would like to reach out to me as well,” she said.

A recent breast cancer diagnosis is presenting major life challenges in an already challenging pandemic year for a 33-year-old wife and mother of four.

This summer, “I went to see my gynecologist because I did feel that my left breast felt different,” Sade (pronounced Sha-day) Michael said. “My body could tell something was wrong.”

Michael’s OB/GYN referred the Proctorville, Ohio, resident to the Edwards Comprehensive Cancer Center of Cabell Huntington Hospital in Huntington, where she received an ultrasound, mammogram and biopsy.

“I was diagnosed with an invasive ductal carcinoma on July 27,” she said. “They caught it in the second stage, which sounds a little scary, because that’s invasive. They say the younger your age, 35 and younger, your breast tissue is really dense, so mammograms a lot of times won’t even pick it up in the earlier stage. Even if you know something’s wrong, have had tests and nothing showed up, keep telling them, because you never know. It could be nothing, but it could turn out to be something they can treat.”

Michael is taking estrogen blockers until her chemotherapy sessions get underway. On Sept. 30, she learned she is scheduled for 18 rounds of chemotherapy, four of them biweekly at first and the others weekly.

“I’ll have lab tests after that,” she said, “and if everything comes back good, a month after I finish chemo, I’ll be seeing the surgeon to have a double mastectomy. Three months after that, they’ll put the implants in.”

Michael said a double mastectomy was an option among others her physicians presented to her that she elected to take. Although her genetic testing produced negative results of risk, she said, “I just chose to go ahead and lower my chances as to getting it in the future. I chose to do the double mastectomy with the reconstruction. I felt that was the best option.”

“I didn’t think it was anything but maybe a cyst or something,” but they said they’d have to cut her open and take her out.

“I think it is really important to do self-check exams and listen to your body if you know something’s not right,” Michael said. “Very rarely do I go to the doctor unless I know something is wrong. I kind of stay on top of gynecological issues, because there have been female problems and different cancers in my family, but no breast cancer I was aware of.”

She also encourages other women to have genetic testing performed. “That’s very important, not just for my daughters but for my son. They said once he’s 18, he is should have a yearly check-up as well. That was a shock to me.”

Attitude, peer advice and moments of levity whenever possible are buoying her spirits, Michael said.

“I try to not let myself get too down about it. There are some days where I think, ‘Wow, I’m 33 years old, with these kids and this husband, and this job,’ and to hear that you have cancer — that word has not been good in our family.

“Most days, I’m fine. I stay as active as I possibly can without doing too much. I like reading, I listen to music and my mom, my aunt and I have been doing starter’s yoga. What helps me the most about that is watching them and laughing at them. They say, ‘Quit laughing — this is going to be you in about 30 years.’”

Michael said she is keeping a journal through the process, which helps her “because the estrogen blockers give you squirrel brain.”

She has also found information and encouragement through kindred spirits who post on social media. “There are a lot of support groups on Facebook, including some for younger women who have been diagnosed with breast cancer,” she said.

“I’ve been reading their stories and knowing what to expect. Reading that is different from what a doctor tells you; it seems more personal. I see these people, some at different stages, some are going through chemo — each breast cancer has different treatments and a different process.

“Just reading that and knowing, ‘Hey, that’s something I may expect to happen. They’re dealing with it OK. I can get through this.’”

Hanna L. Kesler, a family nurse practitioner specializing in breast oncology at the Edwards Comprehensive Cancer Center, is involved in Michael’s ongoing cancer treatment at the facility. Michael’s journey has resonated with her as a woman three years younger than Michael.

“The unique thing is that Sade is not a typical patient getting screening mammograms at her age,” Kesler said. “She noticed it herself, which is huge, being in tune with your body. Women, especially under the age of 40, need to be familiar with themselves.

“We’ve had several really young women [receiving treatment] lately,” Kesler added. “It really makes you think, ‘Hey, this can happen to me,’ and here you are. I feel really connected to Sade, because of our age and stage where we are in our lives. I’ll be able to help her, and she’s probably going to be able to help us a lot with some of our younger patients.”

Kesler said awareness and preventive measures are essential to lower the risks of getting breast cancer. She cited lifestyle factors such as not smoking, maintaining a proper diet and exercising regularly as good choices.

“We know those things fight cancer. Unfortunately, our area lacks a lot in some of those things, whether it’s a lack of access to care or educational resources about what they should or should not be doing. Environmental and socioeconomic factors do play into breast cancer in our area.

“Part of our job is to make care accessible and to get the word out about things these women should be doing themselves, to be proactive and aware.”

With breast self-examinations, Kesler said, “We typically recommend to check yourself monthly the week after your cycle. That’s the best time to do it.

“We recommend screening mammograms at age 40 or 10 years before the youngest member of your family was diagnosed with breast cancer. Some places say to have them every two years, but we’re very firm on once a year.”

Kesler also advises that breast and pelvic examinations be included with every annual Well Woman examination, to augment detection efforts.

Dr. Daniel A. Rodgers, a diagnostic radiology specialist with Thomas Health in South Charleston and president of Kanawha Valley Radiologists, said that mammogram screenings have come a long way.

“Technology advances every year,” Rodgers said. “We use the latest and greatest equipment here; it’s much less painful for the women. A woman shouldn’t delay coming in for an examination.”

Rodgers also said women should start having annual mammograms at age 40. “Coming back every year is so essential. We can compare last year to this year and see changes — being able to watch that cancer as it starts small and treat it. A mammogram can see cancer that’s too small to feel.

“By finding it really small with a mammogram may mean a lot easier treatment,” he said. “It may require a small surgery rather than a major one. We may be able to preserve the breast and not have a mastectomy or avoid having chemotherapy.”

Rodgers said that since regular mammogram screenings became widespread practice in the 1990s, breast cancer deaths have declined 20% in the United States.

He said COVID-19 concerns should not deter women from getting mammograms this year.

“The government asked us to stop doing elective procedures in April at the height of the pandemic. We canceled them and most others did the same thing. In May, we started bringing patients back, and we’re back up to a full schedule now.”

Rodgers said Thomas Memorial Hospital has spaced waiting room chairs 6 feet or more apart and everyone within the facility is required to wear a mask. “We’re even letting patients wait in their cars instead of the waiting room, if they desire,” he noted.

“I would encourage women not to continue to delay their mammograms,” he said. “The National Cancer Institute director came out with an article where he predicts about 10,000 extra deaths from breast and colorectal cancer this year, because people are putting off screening [during the pandemic]. The dangers of COVID-19 are tremendous, but not having or delaying screening is an even greater risk. I really encourage people to come in for screening.”

Rodgers said that approximately 1,500 women in West Virginia are diagnosed with breast cancer each year and 300 women in the state die annually from it.

“They can make a big difference by coming in for a mammogram and lower their chance of dying of breast cancer. ... Three out of four women who are diagnosed have no risk factors. Just because there’s no history of breast cancer in your family, it doesn’t mean you shouldn’t come in and get screened.

“The mammogram is the only test you don’t need a doctor’s orders for,” Rodgers added. “If you haven’t had a mammogram in the last 12 months, you can just come in here and we can do that for you.”

Michael returned to the cancer center earlier this week to receive further information about her upcoming treatment, having met with a cardiologist, a nutritionist, her surgeon and others over the past two weeks to educate her more about her path ahead.

She said she is willing to share her story with others who may be facing a similar journey and similar concerns.