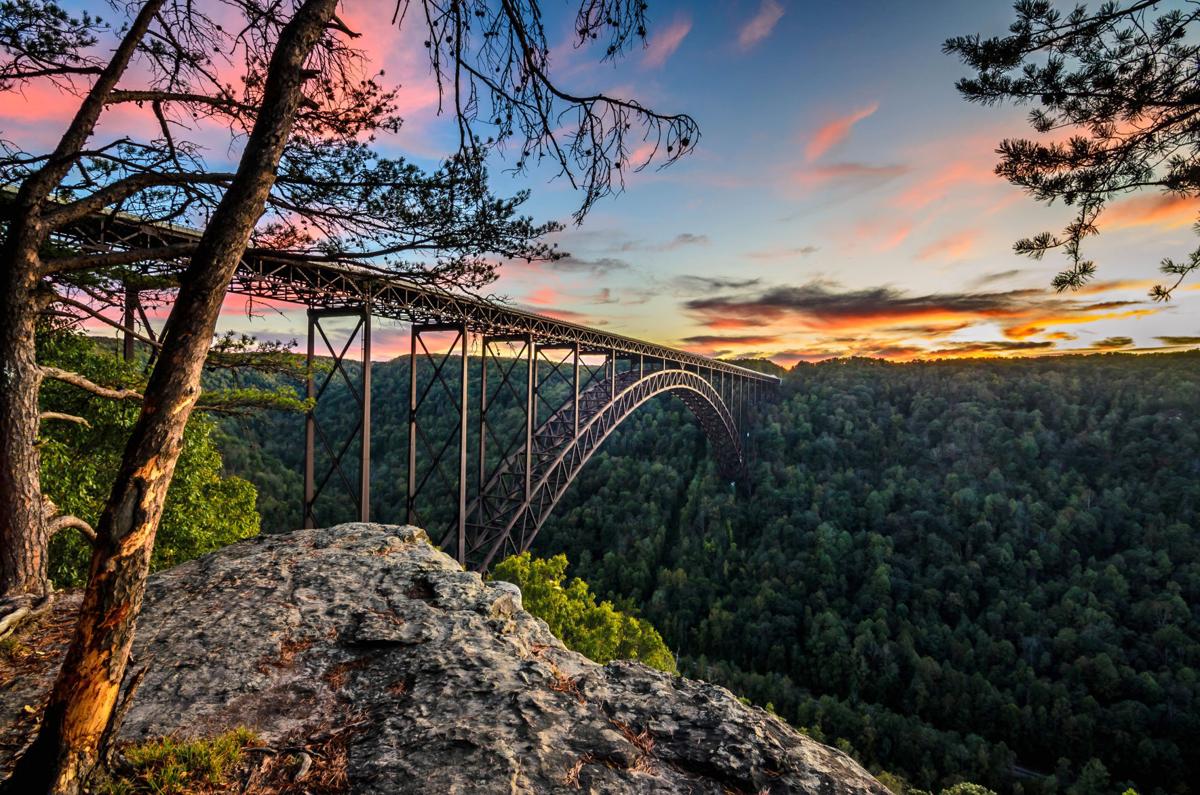 The New River Gorge Bridge is one of the most photographed places in West Virginia. The bridge was once the world’s longest single-span arch bridge.

A tourist group takes in the view of the New River Gorge Bridge at the Canyon Rim overlook. Being designated as a national park is expected to bring more visitors to the area. 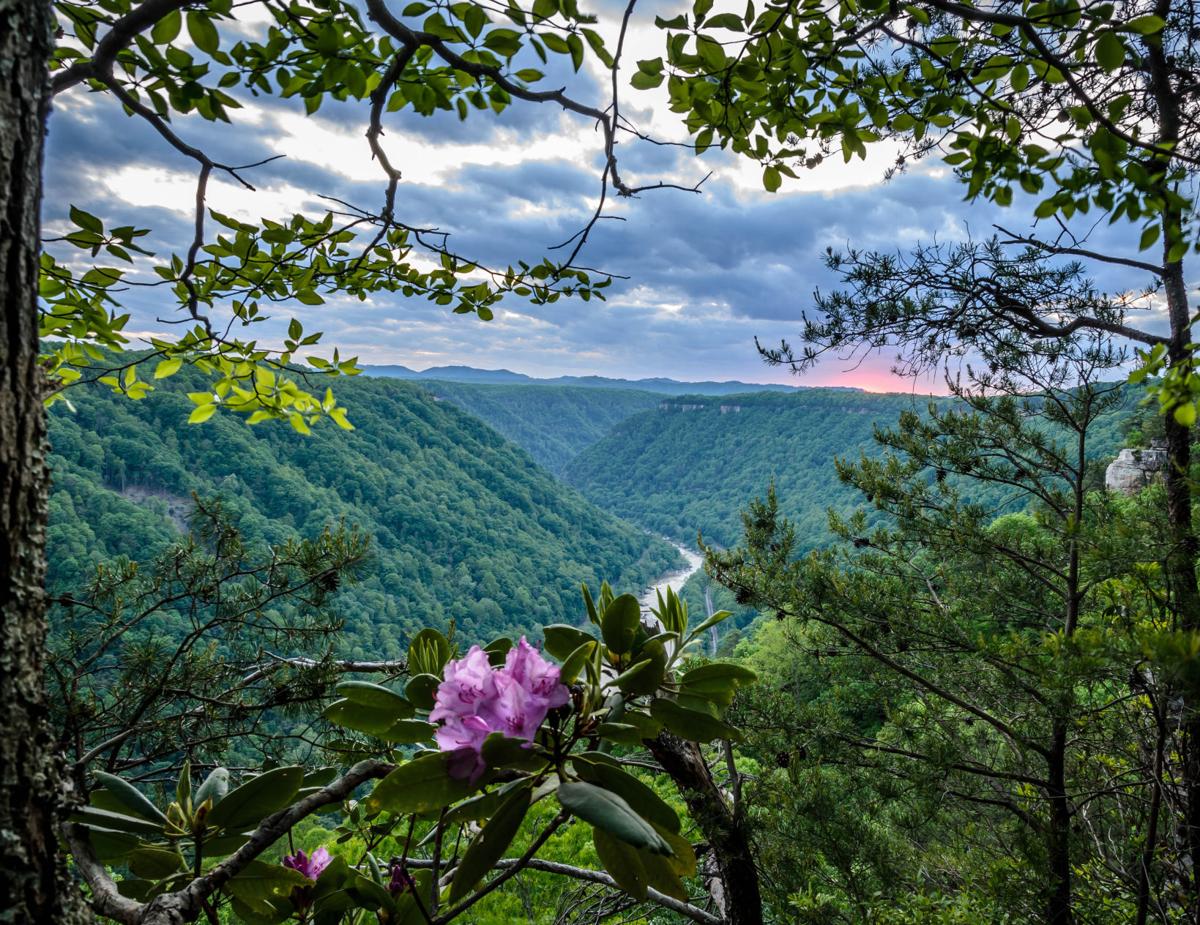 A sunset at Beauty Mountain. Rhododendrons, the state flower, bloom in spring and are a common site throughout New River Gorge and across the Mountain State. 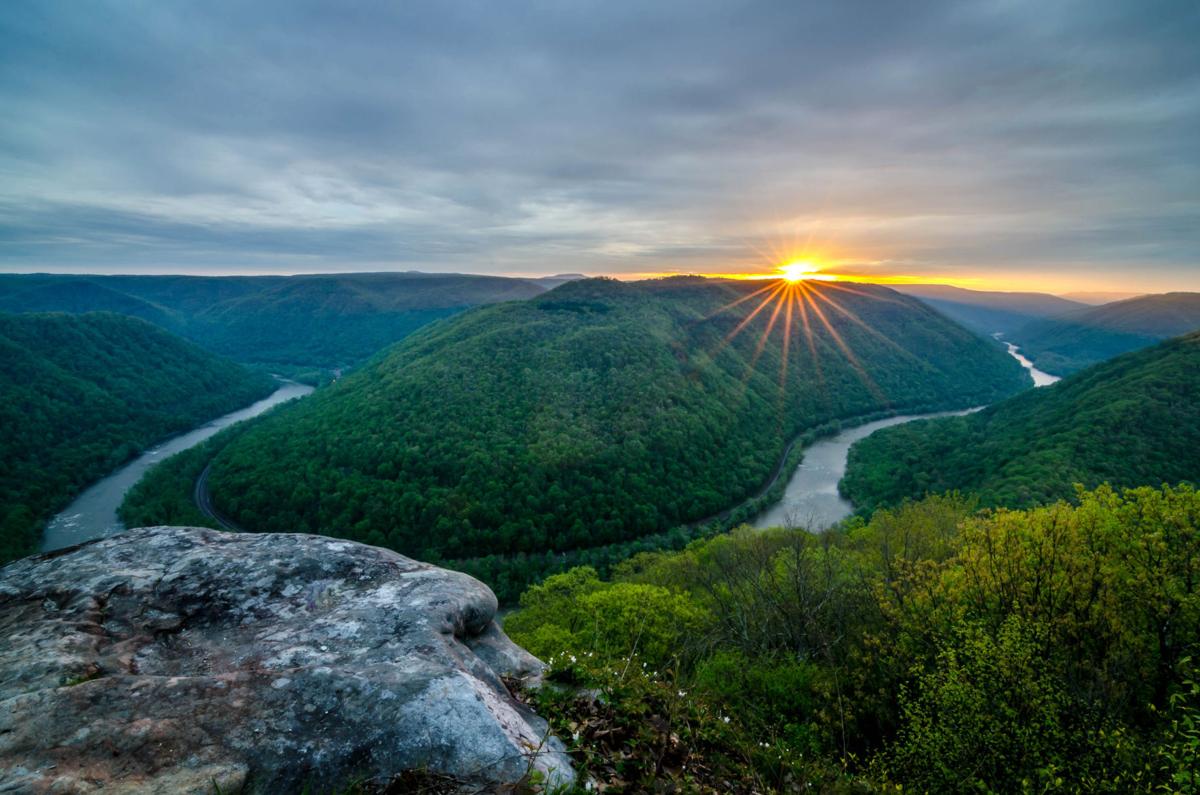 Sunrise over New River Gorge at Grandview overlook. Grandview is a popular destination for hiking, picnicking and sightseeing. 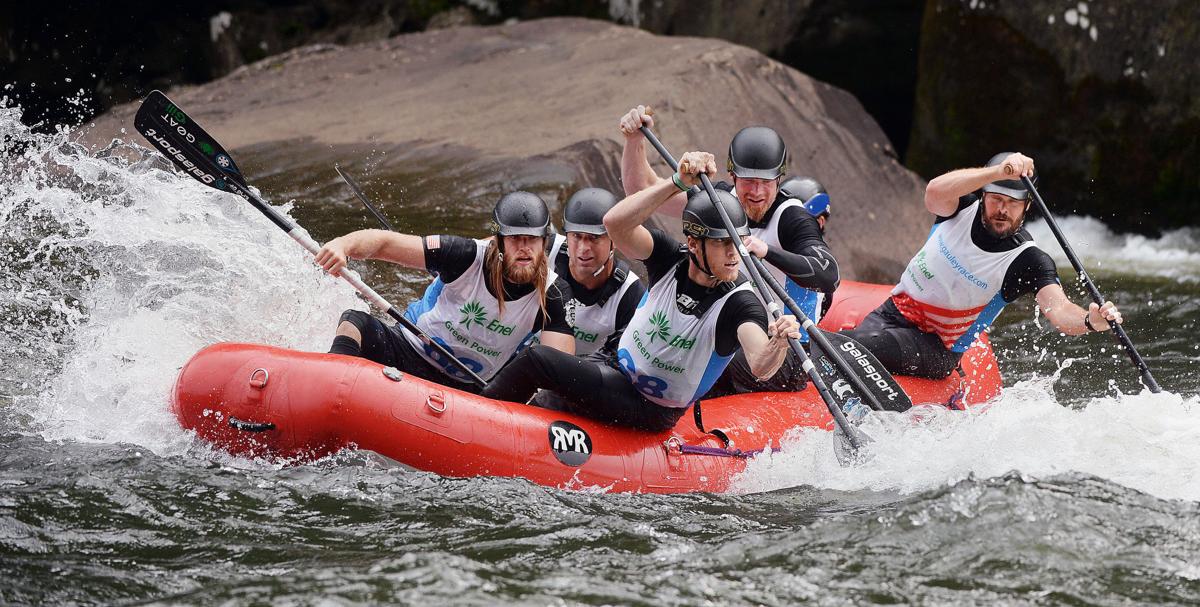 Whitewater rafting on the New and Gauley rivers has long been a national draw for paddlers. The more adventurous prefer the rapids in the upper and lower Gauley River. This photo is from the 2018 National Rafting Championships. 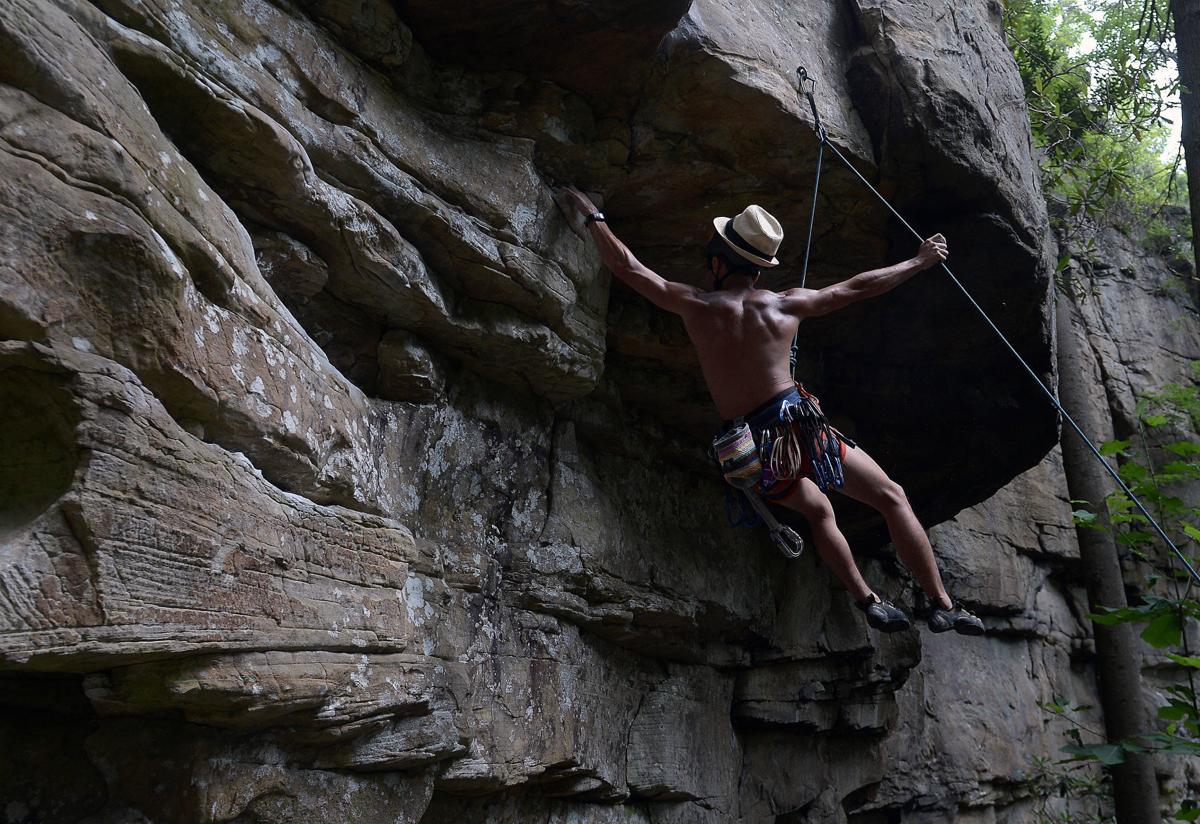 A climber scales Butcher’s Branch on the Upper Kaymoor portion of the New River Gorge. The gorge has more than 1,500 established routes on its sandstone cliffs.

The New River has spent millions of years carving a bucolic gorge in West Virginia. It is now home to one of the most biodiverse forests on the continent. And while humans have tracked prey along its jagged cliffs for thousands of years, now most people come to the gorge to find adventure.

Its sandstone cliffs make for world-class rock climbing. The whitewater rapids in the river below provide some of the wildest rafting on the east coast. Trails carve around the gorge’s hillsides, delivering hikers and bikers to some of West Virginia’s most scenic vistas.

This natural playground was something of a loosely kept secret for many years. But now, the secret is fully out. On 27 December 2020, the river became the New River Gorge national park and preserve, the United States’ newest national park. It is to the delight of many — but not all.

Locals are worried the area is not ready for the national spotlight. They say there simply aren’t enough amenities in the park or its surrounding communities to support the flood of visitors that will come, and the park does not have the money to fix these problems.

“The national park system of the United States of America is the gold standard in the world of conservation and stewardship,” he said. “I don’t want this to be the place where the brand is diminished.”

Kistler, who started climbing in the New River Gorge in the 1980s, says there aren’t enough campgrounds for the tourists that are coming. Popular rock climbing sites are becoming overcrowded. There aren’t enough trails for hikers and mountain bikers. And there aren’t enough parking spaces at the existing trails. Even now, on busy weekends, parked cars spill out on to the main roads.

This is especially true at popular ones like Long Point, which spits hikers on to an outcropping with a postcard-worthy view of the New River Gorge Bridge, once the world’s longest single-span arch bridge. Kistler said local drivers regularly have to dodge hikers walking along the main road to get to the trailhead.

Kistler predicts the problem will only grow worse as the weather gets warmer, COVID-19 travel restrictions are relaxed and more people come to visit the United States’ newest national park.

About 1.4 million people visited the New River Gorge and two other scenic areas nearby in 2019, according to the park service. Those numbers dropped a little during the pandemic, but parks often see a 20% increase in visitors after receiving a national park designation. In the case of New River Gorge, it might be even more.

“Our website hits increased 90% during the first quarter after the redesignation,” said Eve West, a public information officer with the park. West noted that most visitors, after landing on the homepage, visit the “Plan Your Visit” page.

There are signs the deluge is already beginning.

Melissa McCune is a council member for Thurmond, a quaint but mostly vacant former railroad town in the heart of the gorge that now has only four permanent residents. Since January, she has been performing an unscientific survey. She estimates that at least 150 people have stopped by to talk while she and her husband have been fixing up an old house they own in town.

“Eighty per cent of them are from out of state. Half are what I call ‘national parkers’,” she said, referring to people who travel the country attempting to see as many national parks as possible.

“There were people yesterday, six of them from Wisconsin, walking down Main Street in the rain, because it’s the newest national park and they want to see it.”

McCune worries this trickle of visitors will become a flood as the year goes on, and the park doesn’t seem to have the money to address any problems that might arise.

New River Gorge received no additional funding when it became a national park and park leadership is not sure if any extra money will be provided beyond its existing annual budget of $8.7m. (For comparison Yellowstone, the nation’s original national park, has a budget of $34.5m, plus tens of millions more in visitor fees, though it receives several times as many visitors.)

A local non-profit recently had to purchase 15 new backboard stretchers, at a cost of $2,000, for New River Gorge’s park service rescue squads, because the park itself couldn’t afford them.

The park designation will have other costs for locals, too: hunters have lost access to about 7,000 acres where they previously stalked whitetail deer, turkey, raccoons and other prey.

The New River Gorge first entered National Park Service protection in 1978 as a national river. At the time, hunters were assured they would have free roam of the entire property. But as part of its recent name change, about 10% of that land was put inside a national park, where hunting is prohibited. Hunters still have access to the entirety of what is designated the preserve — around 65,000 acres — as well as about 370 acres of newly opened hunting lands.

The 7,000 acres set aside for the national park are mostly concentrated in the heart of the gorge, rough terrain that some say are the area’s best hunting grounds.

“I’m pretty disgusted about this whole thing, and there ain’t a damn thing on God’s green earth I can do about it,” said Larry Case, a hunter and outdoor writer who lives in the gorge.

Despite hunters’ access to much of the gorge outside the protected park acreage, in Case’s mind any land lost is too much.

Not everyone is pessimistic about the New River’s national park redesignation, of course.

The West Virginia senators Joe Manchin and Shelley Moore Capito, who drafted the legislation that created the park, both said the state would reap economic benefits from the move, and highlight the state’s astonishing natural beauty. Locals note hopefully that both sit on the Senate committee that doles out money to agencies such as the park service.

The park service is making plans for an influx of visitors, and is able to increase the park boundary by another 100 acres for parking and other needs.

Some locals are also hopeful.

“We’ve gone from the minor league to the majors,” said Dave Arnold, co-founder of the rafting company Adventures on the Gorge.

Arnold hopes the new national park will increase interest in whitewater rafting, which has been decreasing in popularity since its peak in the late 1990s. Back then, the gorge saw 225,000 rafters a year. That’s fallen to about 100,000 in recent years.

If there are problems, says Sharon Cruikshank, the mayor of the town of Fayetteville, they will not last forever.

Her town is the gateway to the Gorge. It’s where visitors come to gas up their cars, eat in its handful of locally owned restaurants and shop at boutiques and outfitters like Water Stone. On a busy Saturday, traffic at the town’s one stoplight can back up for blocks. Any increase in tourism will be slow, she thinks, giving Fayetteville plenty of time to make the changes it needs to make to keep its laid-back, small-town vibe.

And these concerns, she believes, are secondary to what’s really important about the new national park designation — the preservation of both the natural and human history of the gorge.

When Cruikshank’s forebears first moved to the area for jobs in the booming coal industry, they lived in a town called Fayette Station. The area is now a popular boat launch for New River paddlers. The town was long ago swallowed by the forest. Only the stones that made up the buildings’ foundations remain.

“Now I know that area is always protected,” Cruikshank said. “No one can take the stones away.”

This article was published originally in the May 12 edition of The Guardian, as part of its “This Land is Your Land” series, and is reprinted here with permission.

Zack Harold is a freelance writer who lives in Charleston.

Engle: The house is on fire; will we stop lighting matches? (Opinion)

Hoppy Kercheval: Free speech is vital, even if it's distasteful (Opinion)