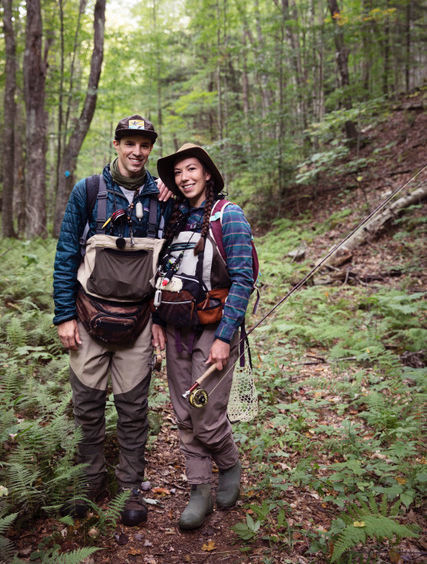 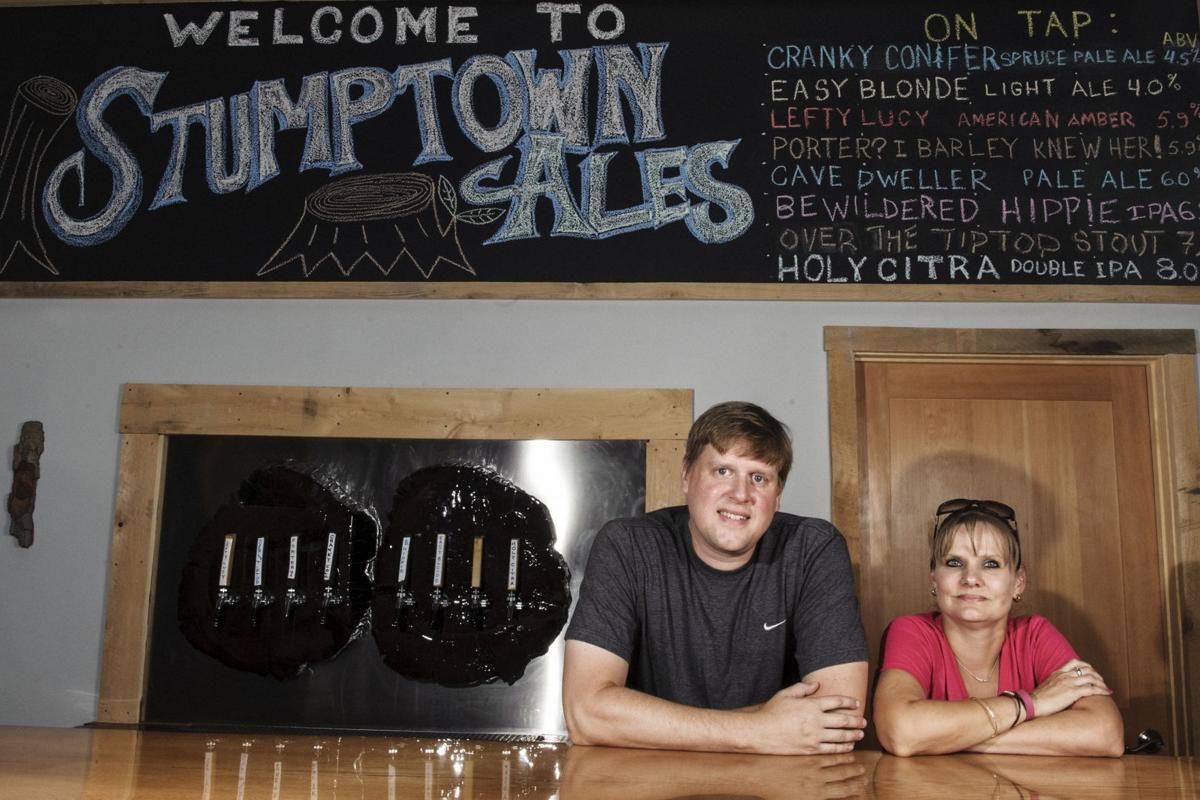 Stumptown Ales owners Jonathan and Cindy Robeson stand behind the bar at their brewery in Davis in 2015. 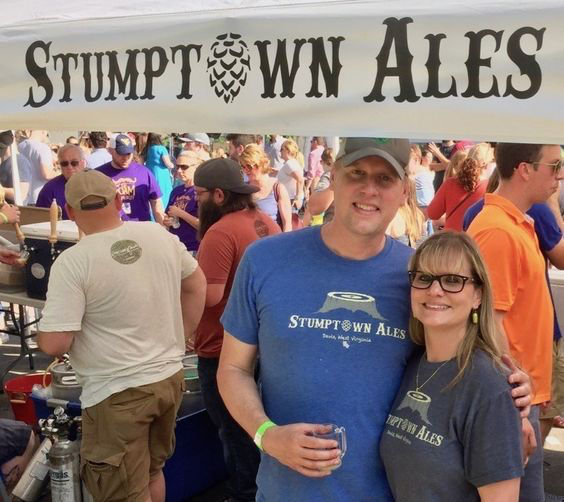 Jonathan and Cindy Robeson, owners of Stumptown Ales at Davis. 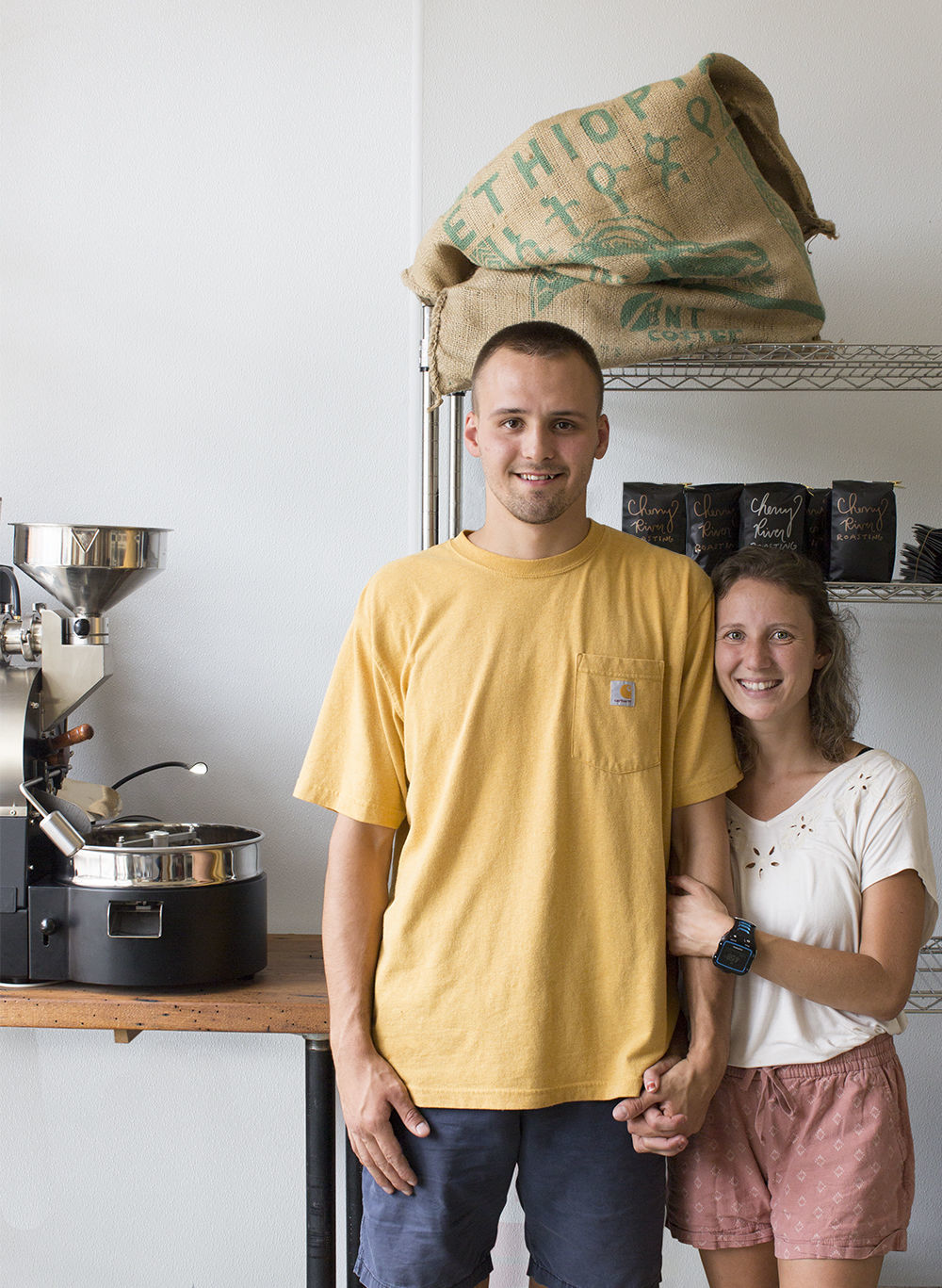 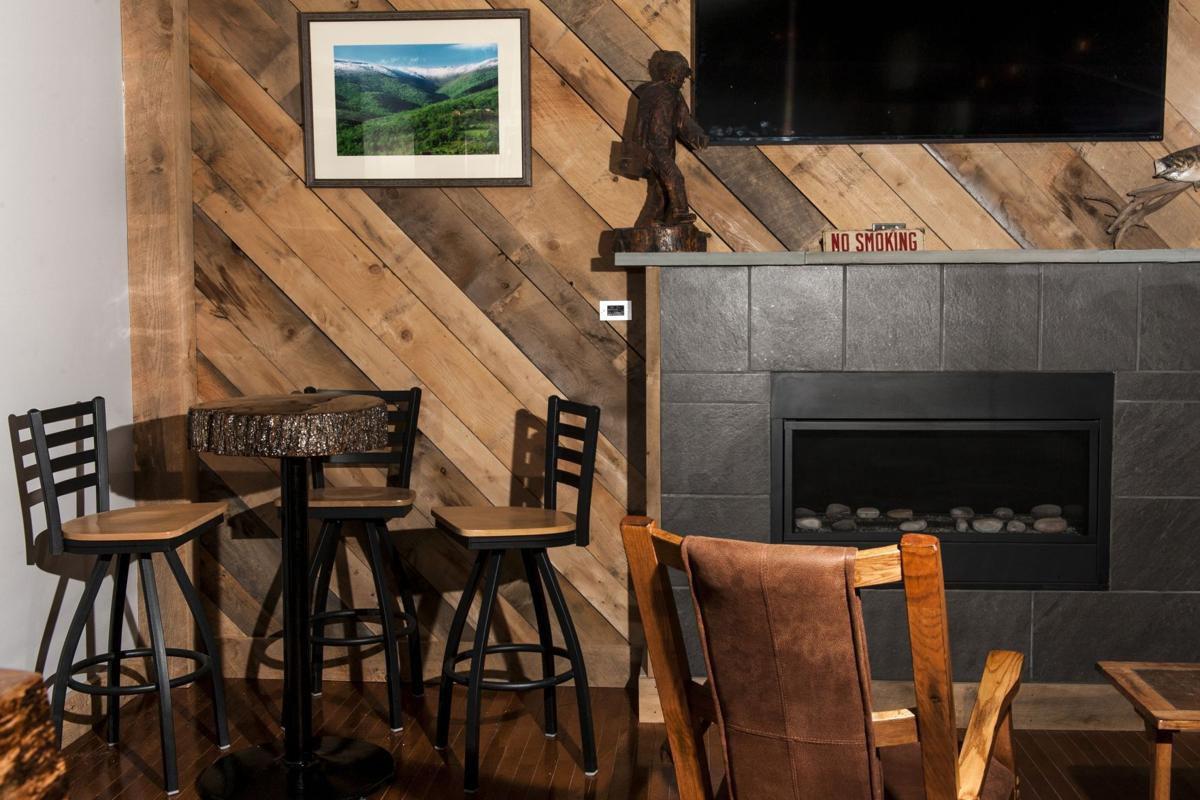 Seating at the Stumptown Ales brewery in Davis. 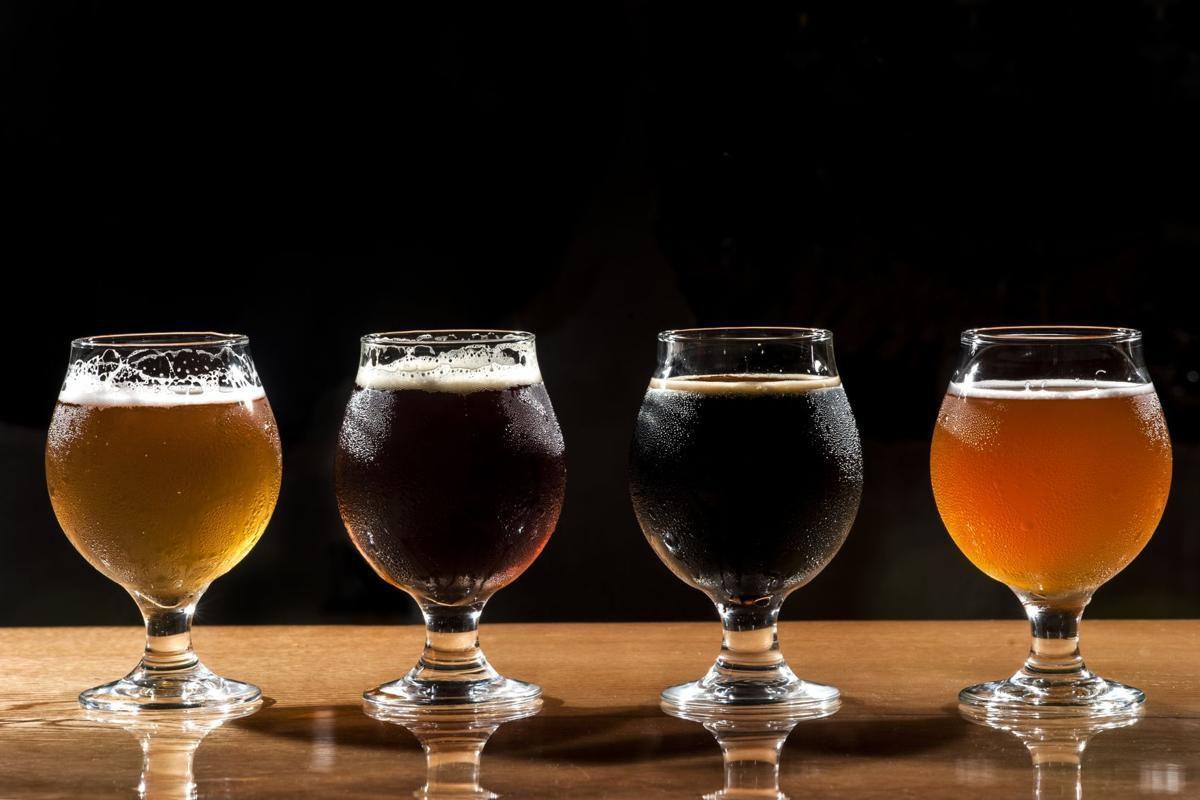 An assortment of beers from Stumptown Ales in Davis. From left: Easy Blonde, a light ale; Lefty Lucy, an American amber; Porter? I Barely Knew Her!, a porter; and Holy Citra, a double IPA.

Stumptown Ales owners Jonathan and Cindy Robeson stand behind the bar at their brewery in Davis in 2015.

Jonathan and Cindy Robeson, owners of Stumptown Ales at Davis.

Seating at the Stumptown Ales brewery in Davis.

An assortment of beers from Stumptown Ales in Davis. From left: Easy Blonde, a light ale; Lefty Lucy, an American amber; Porter? I Barely Knew Her!, a porter; and Holy Citra, a double IPA.

There’s a new bear in the Monongahela National Forest.

The black bear in the logo showing up on signage in towns that border the national forest presents a sleeker image than old Smokey Bear, the venerable mascot of the Forest Service. But don’t worry — Smokey isn’t going away. The new bear on the block is part of a marketing campaign aimed less at Boomers (like ol’ Smokey) and more at millennials, and Gen X, Y and Zers.

The initiative is called the Mon Forest Towns partnership, and its aim is to promote the small towns surrounding the 921,000-acre forest. It’s about connecting people and communities.

Here are a few of those people.

On any given weekend at Knapp’s Creek Trout Lodge in downtown Marlinton, Anne Mitchell puts on a pot of coffee and opens her sliding glass doors that look onto their private fishing hole. A thick mist is rising off the water and the scent of honeysuckle is strong. Her guests rise and eat a hearty breakfast of eggs Benedict and trout smoked on the premises.

Her partner, Mark Hengemihle, starts early in the tack room hauling fishing rods, flies, coolers and chairs to the creek bank. He and Anne are able to instruct their guests on the basics of fly fishing right in their backyard.

Other days, they lead small groups of skilled and novice fly-fishing enthusiasts on excursions deep in the Monongahela National Forest in search of native trout. Though the COVID-19 lockdown delayed their opening this year, they are still looking to expand their operation.

Not far upstream, Discovery Junction sits waiting for the day to begin. This vacant lot is in the process of being transformed into a community green space and outdoor venue for concerts, plays and even a farmer’s market.

In Davis, on the upper edge of the national forest, brewmaster Jonathan Robeson is firing up the hot liquor tank at Stumptown Ales. A barmy aroma hangs in the brewery, much like rising bread. Jonathan oversees the process of adding the carefully selected ingredients into what’s called the mash tun: oats, malt, hops, yeast, sugar and water. This batch — a breakfast stout — will contain cocoa nibs from Ghana and baker’s chocolate.

Meanwhile, his wife Cindy is on the phone finalizing orders for the week. The Robesons do their own distributing and sell exclusively in West Virginia. Their local customers include Sirianni’s Pizza, Hellbender Burritos, Wicked Wilderness and Canaan Valley BBQ in Davis. Stumptown also delivers tap kegs to businesses in other Mon Forest towns — The Purple Fiddle in Thomas, Brewstel in Elkins and The Whistlepunk Taphouse and Grill in Richwood.

It’s noon in Elkins, the northern gateway to the Mon Forest. Joey Riddle, owner of Joey’s Bike Shop, is showing a Scott Aspect 940 Mountain Bike to a potential buyer from Pennsylvania. Joey’s wife, Mandy, is fitting a family of four from Virginia with GIRO bike helmets. The family plans to hop onto the nearby Allegheny Highlands Rail Trail, where they will climb Pheasant and Polecat Knob Mountains, cross Shaver’s Creek on a restored railroad bridge and ride along Black Fork River.

Unlike restaurants and lodges, Joey’s 12-year-old business has boomed during the COVID-19 pandemic. “I had 100 bikes in my inventory starting out the year,” he said. “I now have two.” They also rent bikes and do around 500 bike repairs in a typical year.

At 27 and 25 respectively, Nikki and Jake Tyler of Richwood are among the youngest entrepreneurs to open a small business in the Mon Forest. Cherry River Roasting of Richwood ships whole bean custom roasted coffee all over America. They figured out how to eliminate the middle man and import fresh beans directly from Ethiopia, Costa Rica and Chile. Their business grew so fast they quickly burned up small Baymore roasters and invested in a larger machine that cranks out several pounds per hour.

Just this summer they realized their dream of operating their own coffee bar inside Rosewood Florist on Main Street, where they serve up cappuccinos, lattes, smoothies and fresh, local baked goods.

These are just a few of the entrepreneurs working to capitalize on increased tourism and outdoor recreation in the Monongahela National Forest, which draws approximately 1.3 million visitors a year.

In the past, most of residents in these small towns would have earned their livelihoods from the coal and timber industries. As those industries have waned, communities have sought to find a new path forward.

There are ten towns in the Mon Forest Towns partnership: Marlinton, Davis, Elkins, Richwood, Thomas, Parsons, Petersburg, Franklin, Cowen and White Sulphur Springs. These ten towns are now being linked in a new initiative designed to market them as part of a regional recreation destination.

The Mon Forests Towns partnership started in 2016 when the USDA began rethinking how the forest impacts the people who live within its boundaries. According to Cynthia Sandeno, District Ranger for the USDA Forest Service, they began to hold community meetings to listen to the various stakeholders in the towns — mayors, town council members, chamber of commerce leaders, business owners. Their aim was to learn how the forest could help improve the quality of life in the area, especially in towns struggling to transition from extraction industries to tourism.

The Forest Service decided to bring in experts like Doug Arbogast, rural tourism specialist with the West Virginia University Extension Office. “Doug came in with his expertise,” said Sandeno, “and in no time we were seeing so much enthusiasm from other groups, like the USDA Rural Development and the Woodlands Development Group,” a lending organization headquartered in Elkins.

“We realized that all these Mon forest towns were trying to market themselves as recreation destinations,” explained Megan Mason Dister, AmeriCorps member working for the USFS. “But they were working alone. That is hard to do.”

So the group identified ten towns with unique histories and features but a common purpose: a desire to attract visitors to come not just to their towns, but to the region — the way beach regions like Myrtle Beach and the Outer Banks attract families for as long as a week or two.

Jessica Waldo, director of the Tucker County Visitors Center, said the idea is modeled after the Pennsylvania Wilds, an initiative that markets an entire two million acre region of that state as a destination. “WVU helped create the logo, the brand, the feel,” she said. “The goal is to boost the economies of the communities embedded in the forest and to improve overall quality of life.” The ten towns were identified, and a map was created that showed the physical links between the towns — highways, rivers, trails.

To formalize the partnership, each town council designated a representative to serve on the Mon Forest Towns board. Early this year, a memo of understanding was signed by each town. WVU, the Tucker Community Foundation and the Pocahontas County Convention and Visitors Bureau have been fiscal agents for the initiative.

The partnership has sought out and received grant monies from the Claude Worthington Benedum Foundation and others to provide resources for a regional sign plan. This has allowed them to purchase uniform signage for each town that will contain the bear logo, but will also allow for each town to customize it to highlight its unique features. Some of the towns have already erected the signs.

Funding will also help towns with technical assistance, business consulting and options for loans and grants through the Woodlands Development Group. Plans include a website — scheduled to roll out next month — with an interactive map of the entire region. Amenities like trails, lodging, restaurants, etc., will pop up with a click.

Much of the funding will be used for placing signs and kiosks throughout the communities and the national forest to help visitors locate businesses and attractions.

Citizens living in the Mon Forest region are already seeing the benefits of the partnership. “This will be great for the biking business,” says Joey Riddle, “because it will connect all the towns into a trail network and make the sport more accessible. Mountain biking brings thousands of riders to the Mon Forest, who then spend money on gas, lodging, meals, attractions and shopping.

Anne Mitchell of Knapp’s Creek Trout Lodge is also excited about the partnership. “We don’t have an advertising budget. I think the increased availability of information is going to allow more people to come and enjoy the area.” She and Mark recently qualified for their 10-year outfitter and guide license to take clients fly fishing in streams in the national forest.

The stakeholders interviewed for this story shared a passionate enthusiasm about the future of this region as a destination for recreation vacations. The owners of Knapp’s Creek Trout Lodge, Stumptown Ales, Joey’s Bikes and Cherry River Roasting are typical of the new breed of small business owners in the region. They bring a vibe that is youthful, green, outdoorsy and healthy.

The Monongahela National Forest has always had an identity as a place to fish, hunt, hike and go camping. Now, thanks to efforts like the Mon Forest Towns partnership, that identity is expanding to include Airbnbs, breweries, bistros, ski shops, wine shops, hostels, coffee bars, makerspaces and art galleries.

The demand is fading for quilts and jellies and primitives that characterized the Appalachian boom of the 1970s. This new generation likes to travel light and avoid clutter. They are more interested in having experiences than purchasing goods.

The new tourist wants a place to get away; they want a break from crowded cities. They want a place with dark skies, where they can do something as simple as gaze up at an array of stars on a clear night.

But they also want their amenities to be nearby. If a sign with a bear on it can help them find all that, then everybody wins.

Susan Johnson’s column “My Side of the Mountain” appears weekly in the Nicholas Chronicle. Contact her at myside@nicholaschronicle.com