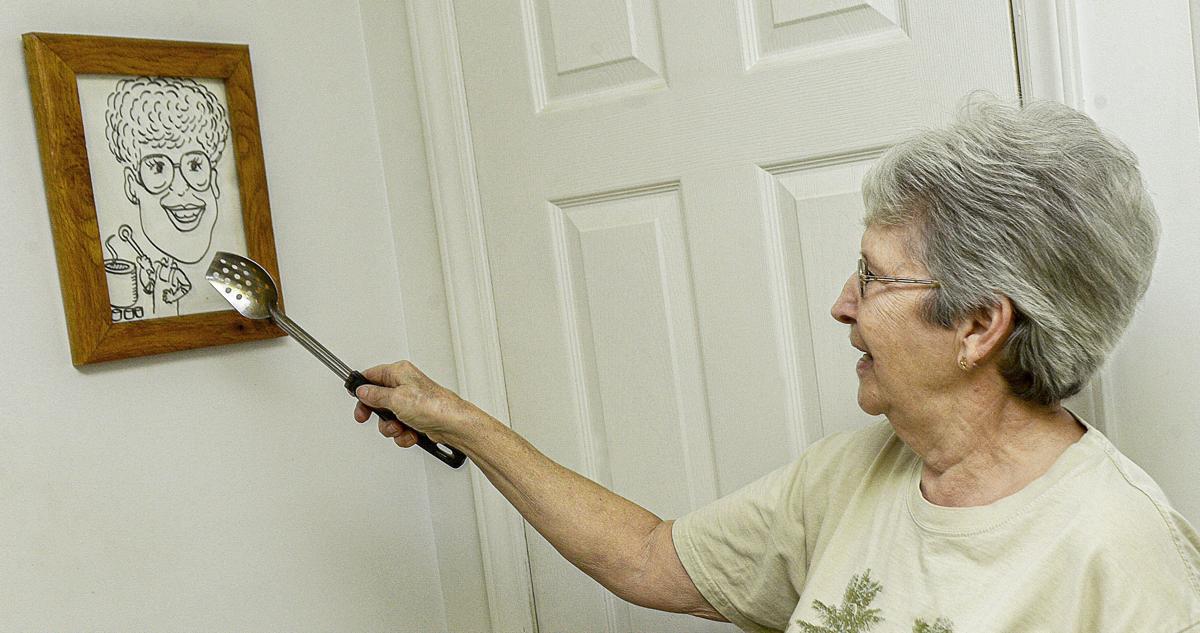 Evelyn McGlothlin points to a cartoon image of herself that hangs in her work kitchen in her Clay County home. 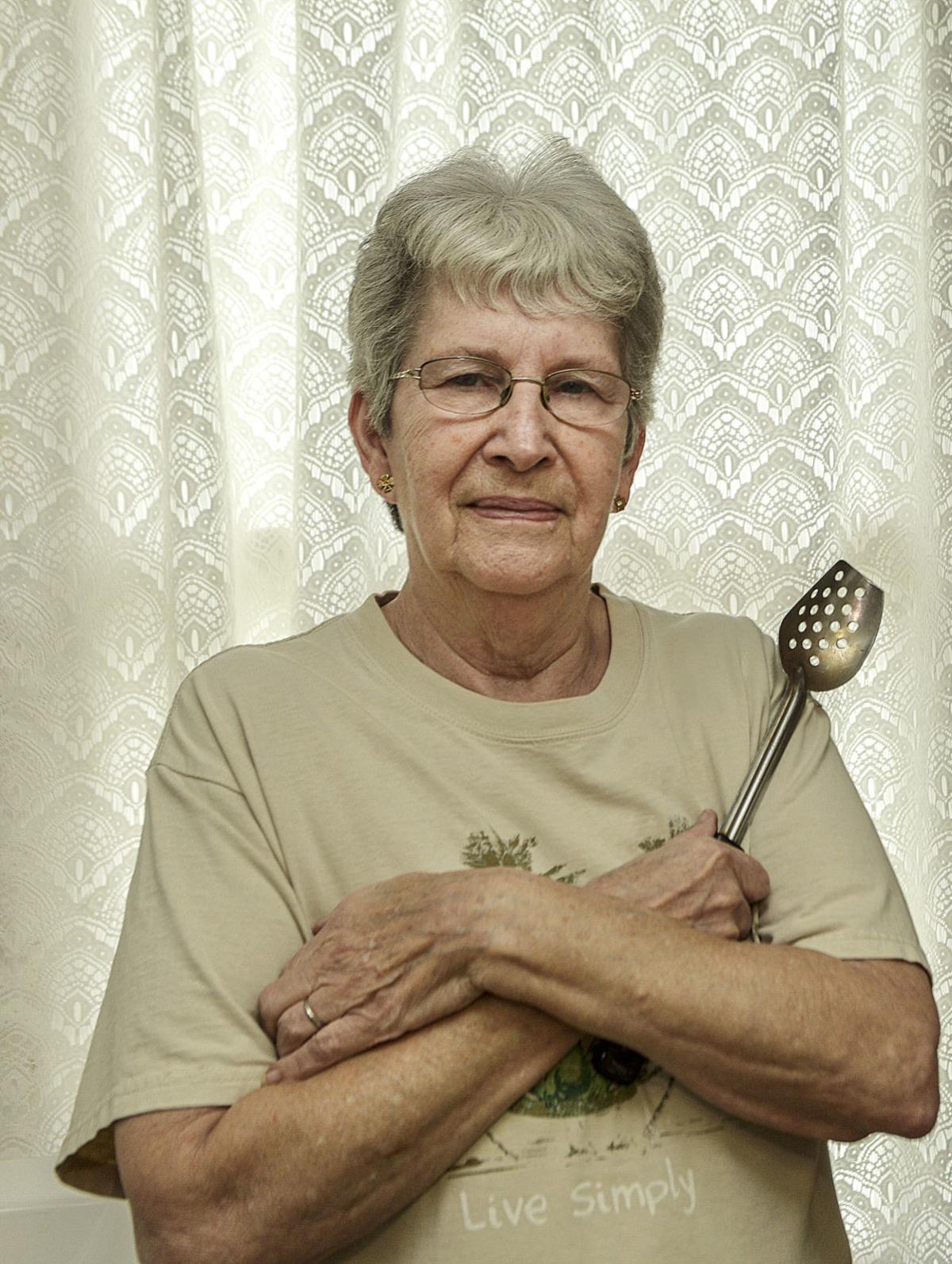 Evelyn McGlothlin stands in her work kitchen. Evelyn’s products are all homemade, and she believes one reason her products have been successful is that they will never be mass-produced. 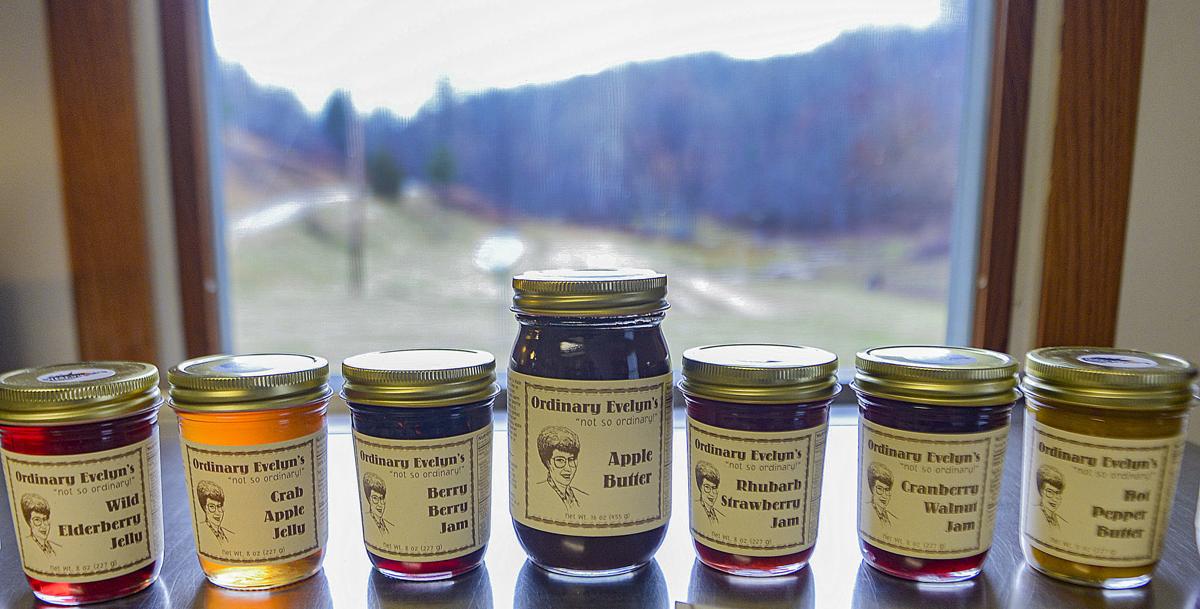 Evelyn’s jams, jellies and butters stand on her kitchen windowsill. According to her website, her grandson says the crab apple jelly “is the best jelly in the history of jelly!” 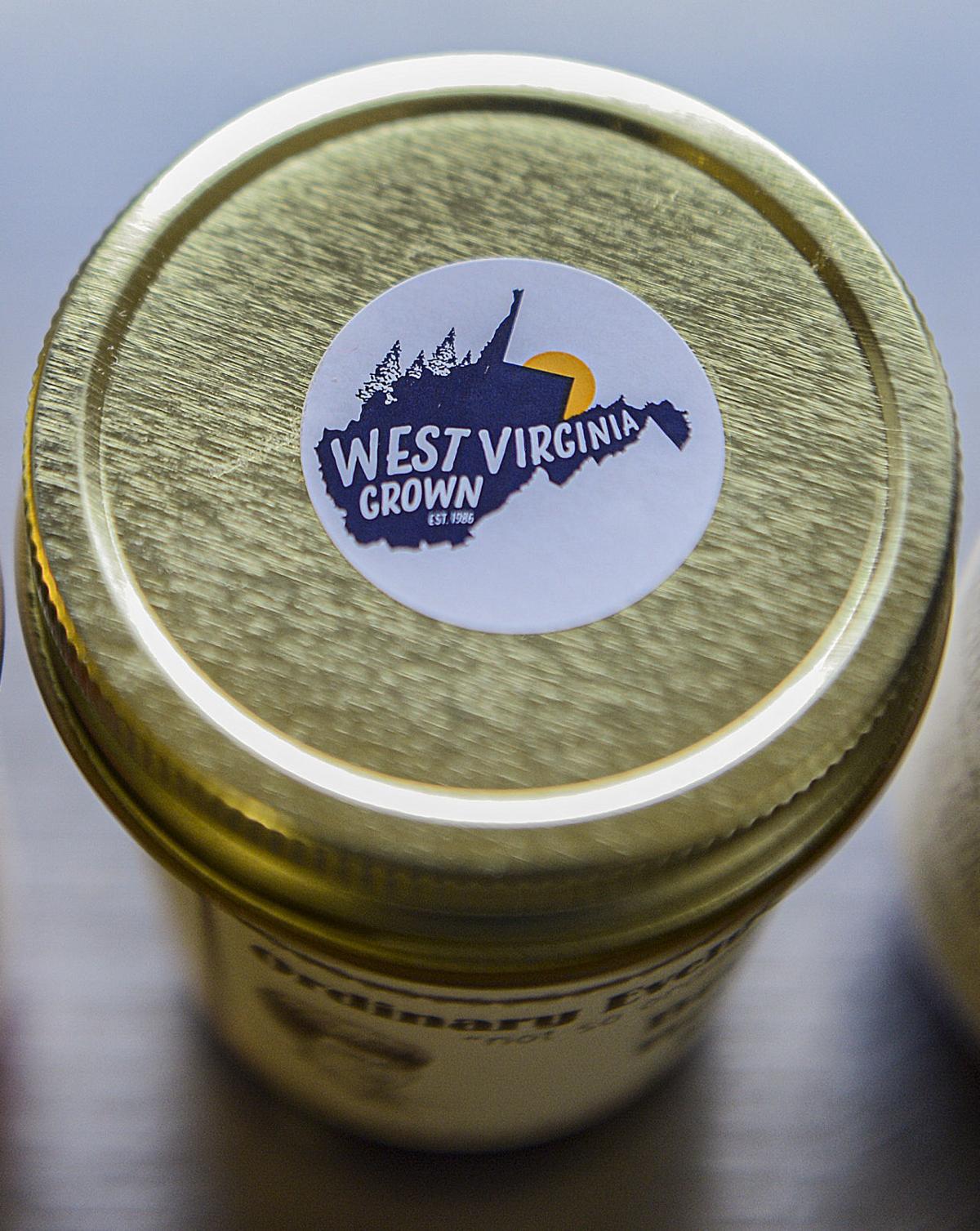 With products that are homemade and sourced from her own garden, Ordinary Evelyn’s has earned the “West Virginia Grown” label. 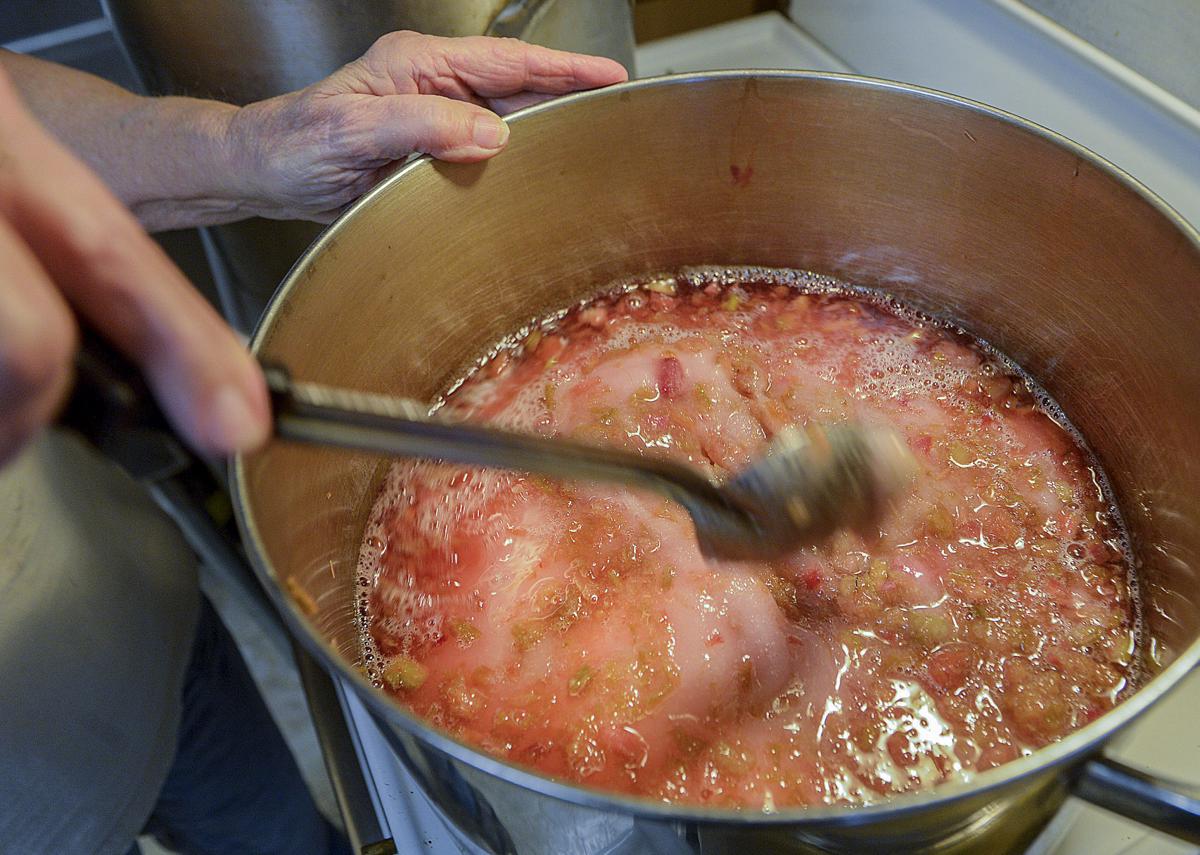 Evelyn McGlothlin cooks rhubarb strawberry jam, which is made from ingredients grown in her garden. Her products are available at Capitol Market and various festivals around West Virginia. 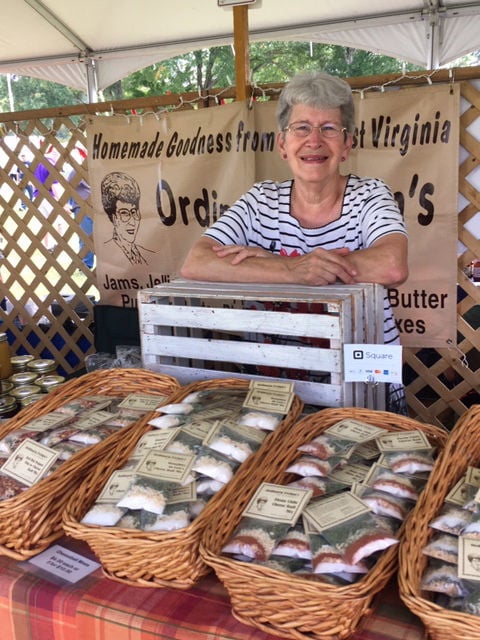 Evelyn McGlothlin makes jellies, butters and dip mixes at her Clay County home and has been successful marketing her food fare at fairs and festivals across the state.

Evelyn McGlothlin points to a cartoon image of herself that hangs in her work kitchen in her Clay County home.

Evelyn McGlothlin stands in her work kitchen. Evelyn’s products are all homemade, and she believes one reason her products have been successful is that they will never be mass-produced.

Evelyn’s jams, jellies and butters stand on her kitchen windowsill. According to her website, her grandson says the crab apple jelly “is the best jelly in the history of jelly!”

With products that are homemade and sourced from her own garden, Ordinary Evelyn’s has earned the “West Virginia Grown” label.

Evelyn McGlothlin cooks rhubarb strawberry jam, which is made from ingredients grown in her garden. Her products are available at Capitol Market and various festivals around West Virginia.

Evelyn McGlothlin makes jellies, butters and dip mixes at her Clay County home and has been successful marketing her food fare at fairs and festivals across the state.

Evelyn McGlothlin makes jellies, butters and dip mixes, but what she’s really cooking up in her Clay County kitchen is love.

And memories — visions of your beloved grandma stirring apple butter over an open fire, or canning things straight from the garden.

Evelyn does this for you because the traditional Appalachian food tradition is fading away. A fast-food drive-thru may be convenient and your go-to, these days. But when you spread Evelyn’s pumpkin butter on a warm biscuit, you remember where you came from. It’s the food of your childhood, a remnant of a culinary culture that bound people together.

With one taste, you know in your heart that you belong — even if you’ve long moved on.

Around West Virginia, Evelyn’s is recognized by her first name and a cute moniker whipped up by one of her daughters for marketing purposes: “Ordinary Evelyn’s.” Her success story as a rural homemaker who launched a food brand is anything but.

Since the mid-’90s, you may have seen her chatting with what has become a growing flock of faithful customers. They line up two and three deep at craft fairs and festivals around the state just to get a glimpse — and to make sure her supply of popular pepper butter isn’t running low. If you miss out on that, then fair day is a bust.

“There she is,” whispered Susy Wallace, a Hurricane resident who drove all the way to Ripley on the Fourth of July weekend to attend the Mountain State Arts and Crafts Fair.

In the heat, humidity and crowds, Wallace snaked through the festival’s outdoor food tents in search of Evelyn, only to find her ensconced inside one of the fairgrounds’ exhibition buildings, holding court over baskets of her dip mixes, which have become pantry staples in many local households.

A fair would not be a fair without Evelyn, said Wallace, who is never without a packet of her famed dill and ranch dips.

“They are awesome. If you aren’t a cook and don’t have all these spices in your pantry, it makes it very easy to create something great,” Wallace said. “Even if you are a good cook, and you’re in a hurry and you’re going to have company, she’s got the ingredients measured out for you. It’s always just perfect. She doesn’t miss a beat.”

But it’s really more than that, more than the products, Wallace said. “This lady is offering a big blanket of homemade comfort for people. Many people leave our state. But our food, the traditions of that, always brings them home.”

As with many successful ventures, Evelyn’s move into entrepreneurship was born of necessity. Her husband, a coal miner, had been injured in a strip mine accident and was having trouble getting his disability coverage. So Evelyn, a mother of six who was always a homemaker, stepped up to take small jobs nearby to support her family.

She worked at a deli on the evening shift at a group home, and she cooked at a local school. She was always whipping up things she’d canned from her garden and giving them away to friends and family.

“At one point in her life, she was working three jobs,” recalled her daughter, Christina McGlothlin-Boggs. “I would have been a completely insane person. She never complained once.”

One day, McGlothlin-Boggs, now a nurse practitioner at a student health clinic at the University of Kentucky, called her mom after a visit to Tamarack in Beckley. Tamarack — a showcase of regional food fare, arts and crafts — was selling products similar to what Evelyn was giving away, her daughter told her.

McGlothlin-Boggs saw the vision in her mind and let her mom know that her home cooking and recipes could be profitable. There was a demand.

And a business was born.

The Ordinary Evelyn’s logo is a line drawing portrait of Evelyn’s friendly and grandmotherly face. It fits with her unassuming nature as someone who loves the work but eschews any attention. She’s the face of her brand, but she’d rather be in her kitchen, where every jar contains a recipe that she collected and curated.

Scaling the business began by going to every small fair and festival she could, Evelyn said, to help create brand awareness.

“It was a gradual process. I never dreamed that it would even grow into what it has,” she said. “I really, really enjoy the making of the products, but I think part of it for myself is the satisfaction that people like real homemade, handmade canning like this. I enjoy meeting people and talking about it.”

In the early days, her former daughter-in-law would accompany her as they traveled all over the state.

“I wouldn’t buy anything that I hadn’t tasted before,” she said of the limitations of a food startup. But word caught on as people got a taste of her products, and she was in hot demand.

“I love the hot pepper butter,” said Vanessa Been Gordon, a Hurricane native who now lives in Nashville. “When I come in, I drive to Capitol Market for it. It’s the only place that I know that carries it. I’ve given it as gifts, and people are always amazed at how good it is. I love Capitol Market, but it’s that pepper butter that gets me to drive up there.”

Gordon likes to serve it on cornbread. She’s tried other brands, but they never measure up. “To me, it’s a nice West Virginia product that I love and support.”

Evelyn began packaging her products for sale in 1996. Four years later, as her business grew, she consulted the advice of the state Department of Agriculture to create a commercial kitchen. She built it at the homestead where she’s lived for decades, down a long holler in Clay County. The kitchen is in her daughter Christina’s childhood bedroom. Everything she sells is produced there — not outsourced — making it authentically homemade.

The business is a family affair.

She does the cooking. Her husband puts the labels on the jars, lifts boxes and helps fill their orders. They both tend a nearby garden, where ingredients for products like her rhubarb jam are grown. A helper comes in to work on the spice packets. It’s a small operation, but one founded on determination.

“It’s hard work. Unless you have a lot of help,” she said. “Most of all, I think you have to love what you are doing. A lot of people start and quit for that reason.”

Evelyn estimates, by a tally of the glass jars she orders, that she sells about 10,000 of her nine bottled products per year. In addition to 10 dry mix packets, she sells dips and cheese balls; apple butter, pumpkin butter and hot pepper butter; pickled beets; rhubarb strawberry jam, cranberry walnut jam and berry berry jam; and wild elderberry jelly and crab apple jelly.

“According to my grandson, this is the best jelly in the history of jelly!” the homespun product description on her website says of the crab apple jelly.

One reason Evelyn believes her products have been successful is that they will never be mass-produced.

“It is always the same. If you buy a jar today and buy a jar next year, the same,” she said. “When you make small batches, you just have more control.

“I know people, companies, that started small like myself and then when they got bigger, they sold to other companies,” she said. “And now people who liked their things, they say the product doesn’t taste like it did before.”

Last year, she debuted a cookbook. It was spurred in part by one of her granddaughters, Jessica, who had asked for her to write down her recipes, and wanted to ensure they lived on. Its title: “An Ordinary Cookbook.” It’s filled with images of Evelyn throughout her life and the memories she created for her family through her food.

She signed it for shoppers at the Capitol Market, and it continues to sell on her website, OrdinaryEvelyns.com. There, she tells her story simply, much in the same way she talks about her business.

While other entrepreneurs may be focused on growing their efforts, Evelyn is not, employing her “ordinary” common sense. “I really don’t have my products in very many places. I’m not interested in expanding. I’m 76 years old. My husband is 79. We just have to slow down.”

In 2020, she’s limiting her appearances to three festivals and not taking on any new wholesale accounts.

Her decadeslong fans may not like the sound of that.

“Where is she?” one woman at Milton’s West Virginia Pumpkin Festival in October asked as Evelyn’s daughters, Denise and Christina, manned the Ordinary Evelyn’s festival booth. They hustled to keep up with customers crowding in to buy.

Those who know her, who rave about her products, recognize that Evelyn is not simply ordinary. She’s a bona fide home girl who started a business at 55 to nurture her family, and who carries on — and protects — a tradition that demands respect.

And the customers want to see her, to feel that connection, that shared tradition, from her.

“Every jar you see,” McGlothlin-Boggs said proudly, “she has touched. Her hand has been in that.”

But it’s not just the products, Wallace thinks.

“She’s holding on to our roots,” Wallace said. “And, honestly, I think that’s extraordinary.”

Ranging from sweet, to tart, to somewhat hot, to really hot and hot-with-an-exclamation-mark, the Clay County culinary creations of Ordinary E…