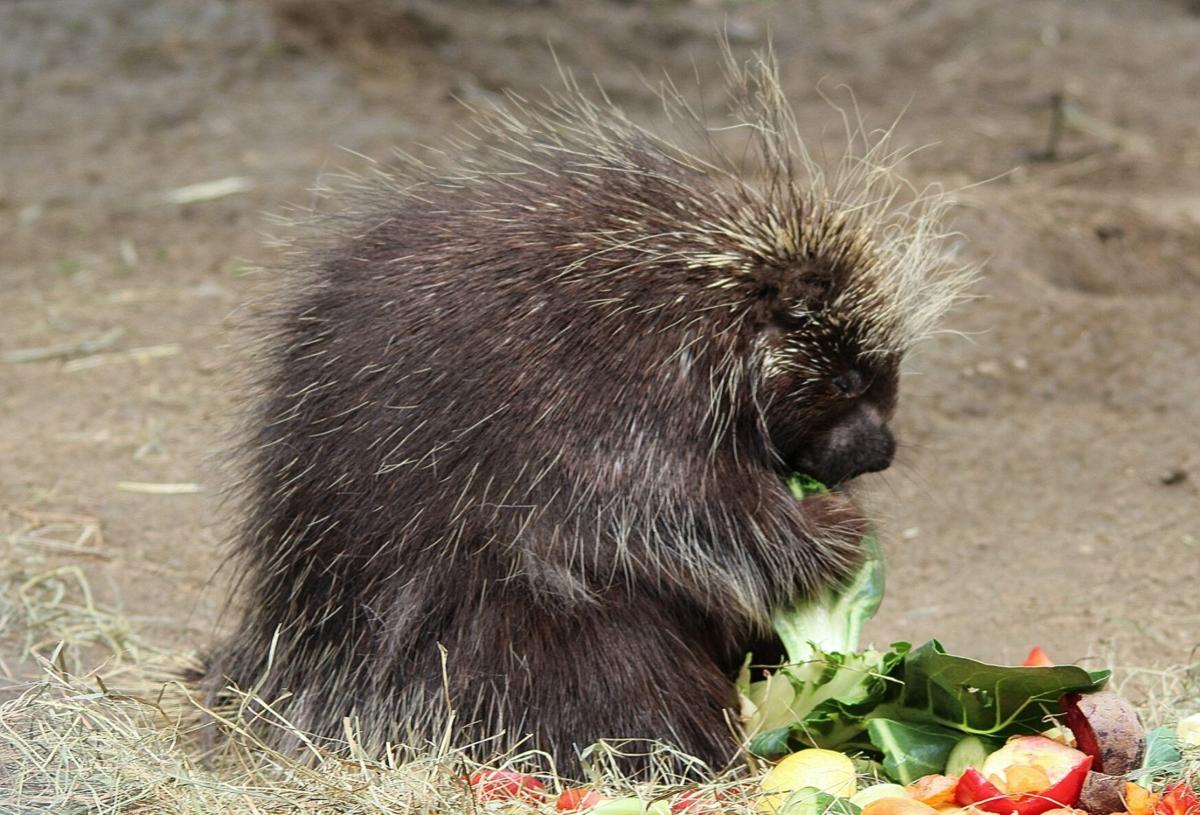 The porcupine is the second largest rodent in North America, second only to the beaver. Wildlife officials say porcupines are extending their range south into more counties in West Virginia. 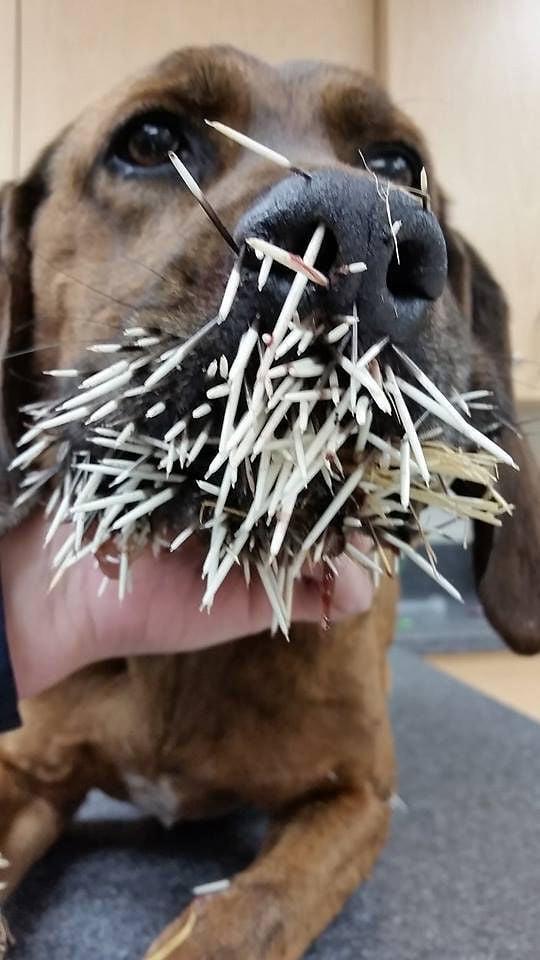 When dogs encounter porcupines, they come away losers. This dog with a face full of qulls was taken to Allegheny Veterinary Services in Elkins, where it was sedated and the quills removed. A quilled dog needs to be taken to a veterinarian immediately. 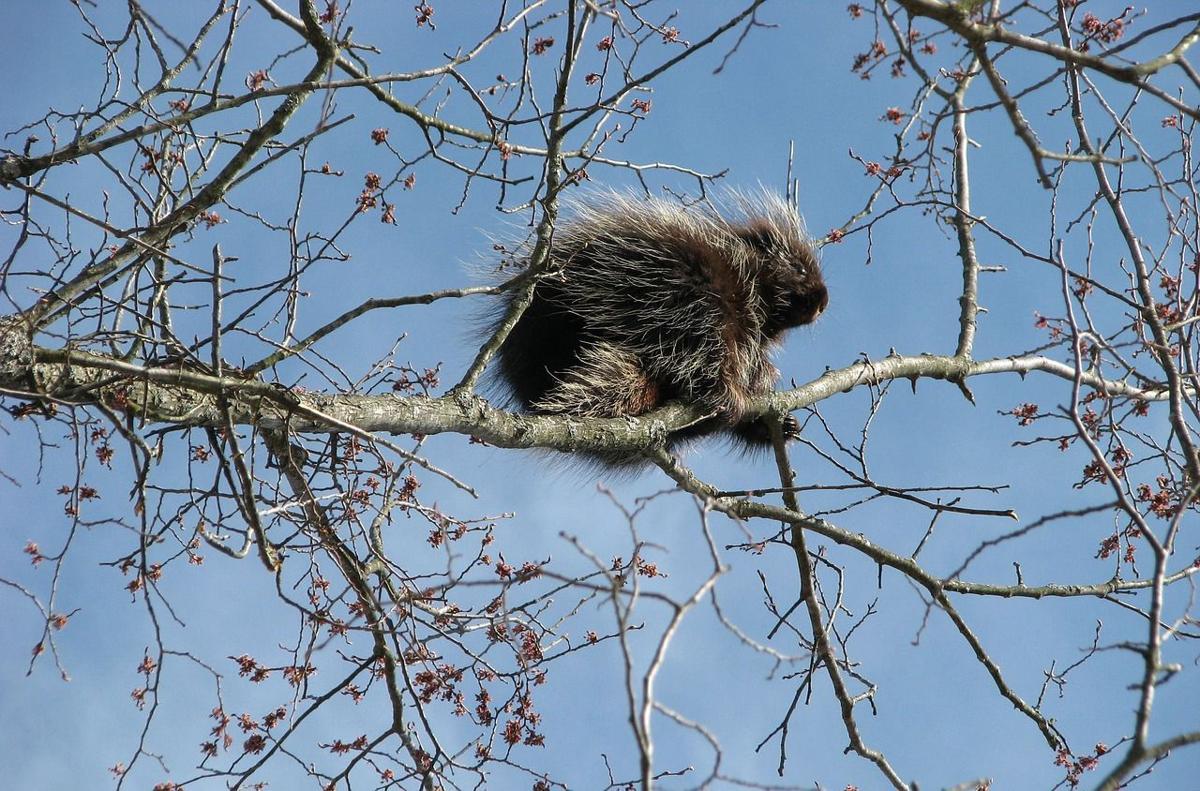 North American porcupines are excellent climbers and will often spend time in trees. On the ground, they have a slow, waddling gait. 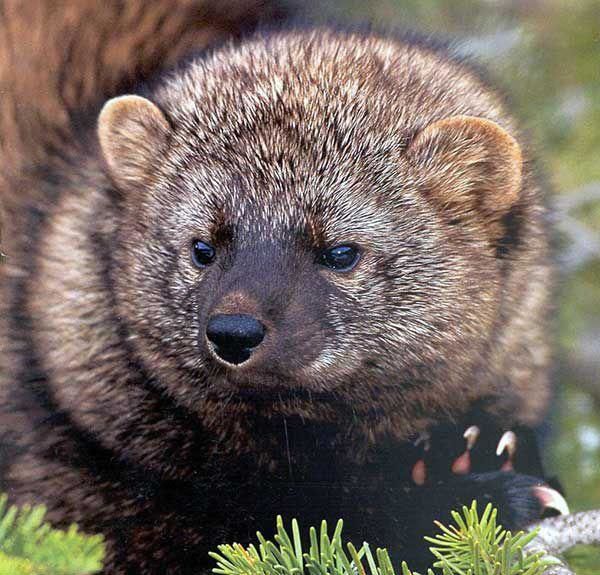 Fishers are one of the few predators that will target porcupines. Fishers have quick reflexes and low-slung bodies, allowing them to attack porcupines face to face. The range of fishers in West Virginia overlaps with the range expansion of porcupines, according WVDNR officials.

The porcupine is the second largest rodent in North America, second only to the beaver. Wildlife officials say porcupines are extending their range south into more counties in West Virginia.

When dogs encounter porcupines, they come away losers. This dog with a face full of qulls was taken to Allegheny Veterinary Services in Elkins, where it was sedated and the quills removed. A quilled dog needs to be taken to a veterinarian immediately.

North American porcupines are excellent climbers and will often spend time in trees. On the ground, they have a slow, waddling gait.

Fishers are one of the few predators that will target porcupines. Fishers have quick reflexes and low-slung bodies, allowing them to attack porcupines face to face. The range of fishers in West Virginia overlaps with the range expansion of porcupines, according WVDNR officials.

When the Eastern coyote began expanding its range into the Mountain State in the ‘70s, West Virginians had to learn to live with a new predator. It took about 20 more years for the wily creatures to increase their numbers until they were in every county in the state.

People worried about the threat to pets. A hunting group even put a bounty on them. Regardless, coyotes are now permanent residents.

Now, a different species is following that same pattern. In the East, porcupines have been expanding their range from Canada and New England south into Pennsylvania and Maryland.

Until recent years, West Virginia sightings were confined to the Eastern Panhandle.

“They are following the mountainous regions of the state south,” Rogers said, adding that there have been confirmed sightings in Tucker, Randolph, Webster and Pocahontas counties.

Allan Niederberger, assistant district wildlife biologist for the WVDNR, was quoted as saying in a Pittsburgh Post-Gazette story that wildlife experts at first theorized the porcupines were hitching rides on logging trucks.

“When we first saw them, we thought they’d gotten carried south from Pennsylvania along I-81 on truckloads of logs. But it’s now apparent that porcupines are moving south naturally along the ridges into West Virginia.”

Rogers agreed. “We are seeing little ones (called ‘pups’ or ‘porcupettes’), which means they are reproducing here,” he said. “Everyone talks about how climate change is causing southern species to move north — possums, for example — but northern species are also expanding their range south. We don’t live in a static environment.”

Porcupines (Latin for “quill pig”) are large rodents, second in size only to beavers in North America. They have a coat of needle-like quills to protect them from predators; a porcupine’s backside can be covered with as many as 30,000 quills. These hardened spikes will detach and become impaled in the flesh of any animal that makes contact.

The rodents are not aggressive, but, if threatened by a predator, will back into them, thrashing their quill-laden tails back and forth.

While porcupines aren’t predators, they can become pests for farmers and other landowners. And they pose a particular threat to dogs. Few dogs, it seems, can resist the temptation to stick their nose into a porcupine’s business.

Rogers remembers the first report he ever got about porcupines, 20 years ago. “A woman in Hampshire County called me and said her dog got quilled,” he said. “I went out to look for myself. Her property was covered with old trailers and junk cars. Her dog, a German shepherd, was hiding under a trailer and wouldn’t come out. His face and neck were covered with quills.”

They eventually got the dog to a vet.

Quills have sharp tips and overlapping scales or barbs that make them difficult to remove once they are stuck in another animal’s skin, according to the National Geographic entry on porcupines. Rogers refers to the quills as “multi-barbed.” Extraction is painful.

“It’s really nasty. I used to coon hunt, and I’ve pulled a lot of quills out of dogs,” he said.

He described a technique of putting the dog’s head between his legs and using pliers to pull out the quills, one by one. “Once you pull that first one out, the dog’s not going to be happy,” he said. “It’s not pretty.”

Rogers recommends taking a dog that’s been quilled to a veterinarian. A vet can anesthetize the dog before extraction and prescribe antibiotics to prevent infection. The vet might also recommend a rabies vaccination booster, as porcupines are a carrier of the disease.

The quills generally will not fall out on their own. In fact, the opposite is true: over time, the quills can embed themselves deeper into the flesh, potentially causing serious harm.

“A quill in a dog’s face may eventually come out its neck,” Rogers said.

Making matters worse, where porcupines are concerned, many dogs don’t seem to learn from their mistakes. They are often repeat offenders.

“Dogs are curious, and some will chase new species, no matter how they are trained,” Rogers said. “If you’re a hound hunter, porcupines are a pest. My brother-in-law had a dog that would get into them night after night.”

One woman recently used social media to issue a warning to pet owners. On the “Hiking West Virginia” Facebook group, she related how her mother’s dog got overly curious with a porcupine in Randolph County near Bear Heaven Campground and received a painful lesson. The unfortunate dog had to have more than 50 quills removed from its muzzle.

Dr. Tracy Walker, veterinarian at Allegheny Veterinary Services in Elkins, has treated three cases of dog/porcupine encounters over the years. All came from the Canaan Valley/Blackwater Falls area. Walker has a jar in her office where she keeps the quills.

Porcupines are primarily nocturnal. They are herbivores and eat leaves, twigs and woody plants. Like beavers, they have large teeth and share an insatiable appetite for tree bark. They will gnaw on a tree to get to the cambium layer — the tender inner bark that is living tissue.

They like mixed forests and thrive on conifers in winter. They prefer forested terrain, but have been known to live in brushy areas as well. They are excellent climbers and do not hibernate. They winter well and stay active throughout the year.

They will also eat farm crops, including corn and root vegetables such as carrots and turnips. They can be destructive in localized areas. They will chew on anything made of wood, such as signs, structures and posts.

“I’ve seen trail signs that were gnawed on by porcupines,” Rogers said. He speculated the stain used on the sign tasted salty to them. “They like anything salty. There have been cases where they gnawed on tires covered in road salt.”

Porcupines are not a protected species in West Virginia. In Pennsylvania, the state game commission instituted a hunting season on porcupines a few years ago. The 2020-2021 season is from Oct. 10 to Jan. 30, with a daily bag limit of three, and a season limit of 10.

Wildlife experts don’t know how far south porcupines will extend their range, but Rogers thinks the critters will stick to mountainous areas.

“They like the rocky places for dens,” he said.

Porcupines will shed quills and new ones grow to replace those that are lost. It was once thought that porcupines could shoot their quills over some distance, but that has been proven false.

Like coyotes before them, it appears porcupines are here to stay. For the most part, predators leave porcupines alone. Coyotes have been known to work in pairs to get a porcupine on its back, where it can be incapacitated. But there is one species that doesn’t hesitate to prey on the rodents: fishers.

Rogers notes that the range of porcupines is identical to the range extension of fishers. Fishers are small mammals — typically 8 or 9 pounds — that are members of the weasel family. They are one of the few predators of porcupines.

“Fishers are carnivores and will kill and eat porcupines,” Rogers said.

Fishers are the same height as porcupines and are fast and agile. This gives them the ability to go face to face with the rodents and avoid the quills.

Climbing trees won’t protect a porcupine from fishers, as fishers can go up and down trees like a squirrel. It seems the fishers rarely get quilled, and if they do, they seem to have a natural resistance to life-threatening infection from the quills.

“The fishers go after them and attack their faces ferociously,” Rogers said. “They will chew through their faces.”

Once the porcupine is dead, the fisher flips it over and eats through the soft belly.

Fishers were wiped out in the Mountain State in the early 20th century due to habitat destruction from logging and unregulated trapping. The dark, sleek fur of fishers was once highly sought after.

According to a 2017 Gazette-Mail story, the DNR decided to reintroduce fishers in the late 1960s. Officials obtained 23 from states in northern New England and placed them in Tucker and Pocahontas counties.

In the ensuing decades, fishers have made an impressive comeback and have been found from Berkeley County in the state’s Eastern Panhandle to Jackson County along the Ohio River, and from Preston County in the north to McDowell County in the south.

Fishers, porcupines, coyotes — all are examples of species adapting to a changing environment. Their movements can offer a window into the effects of climate change and can help determine future wildlife management policies.

Eugene Walker knows of only one dog/porcupine encounter in Pocahontas County. In that incident, a pet dog got quilled.

Jim Probst: Moving on from coal without abandoning miners (Opinion)

Hoppy Kercheval: No middle ground to be had for Manchin (Opinion)