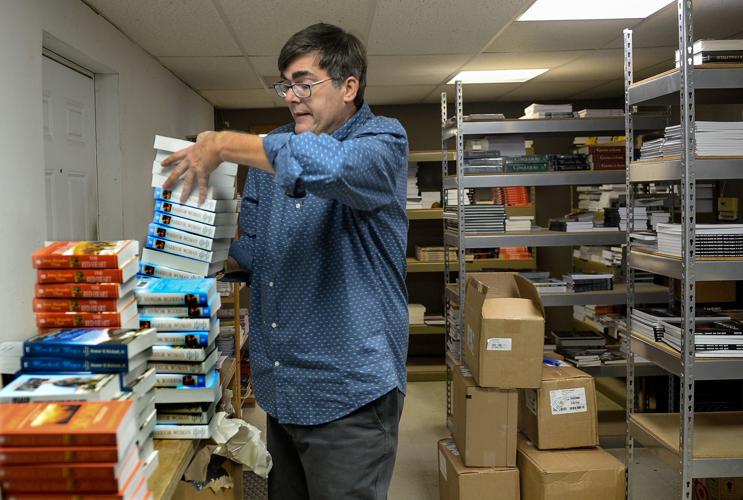 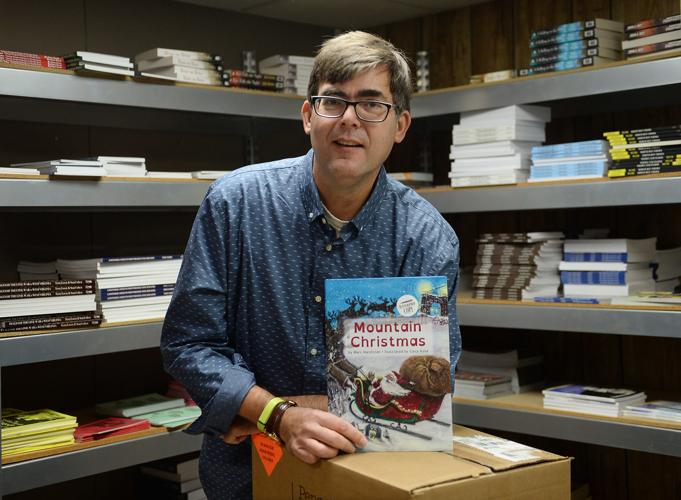 Bill Clements at West Virginia Book Company is shown with a recent release: a book by the poet laureate of West Virginia, Marc Harshman. 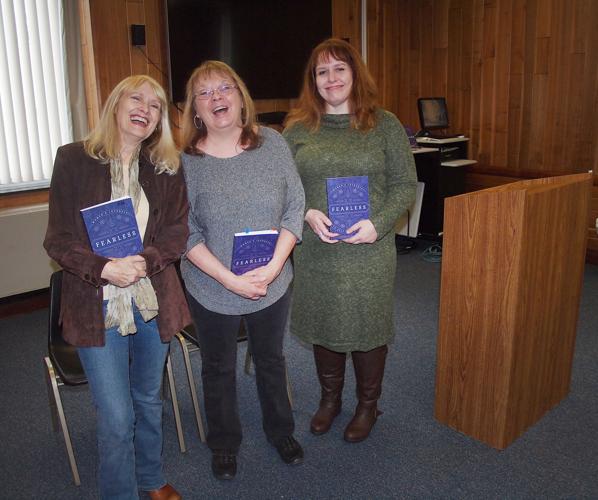 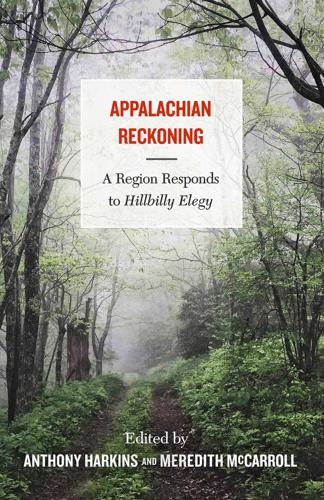 “Appalachian Reckoning” is a collection of essays and creative writing published recently by West Virginia University Press. The book is intended as a response to the controversial best seller, “Hillbilly Elegy.” 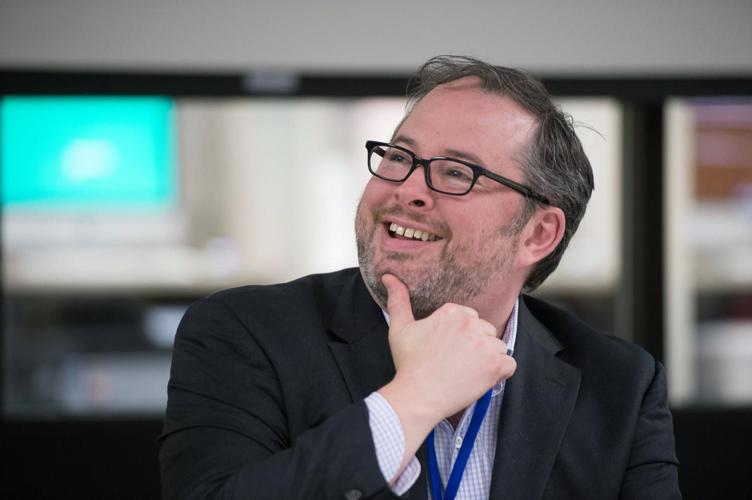 Derek Krissoff is director of West Virginia University Press. “We look for authors and work that reflect the diversity of Appalachia’s demographics, including its racial and ethnic heritages, LGBTQ community and cultural issues,” he said. 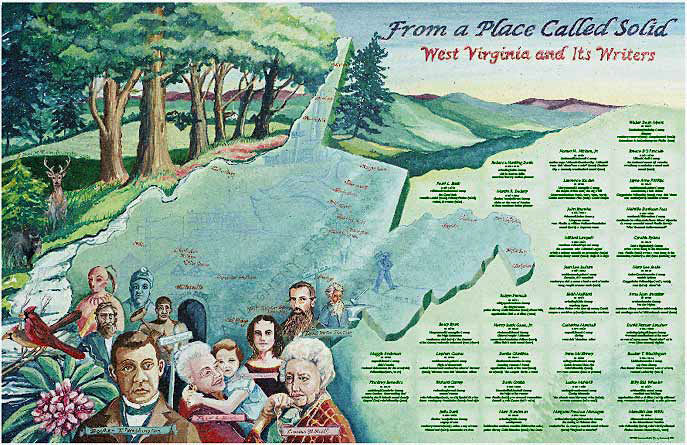 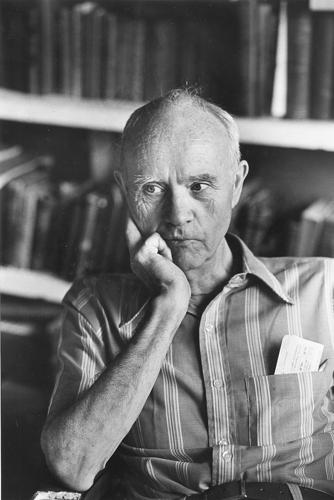 Bill Clements at West Virginia Book Company is shown with a recent release: a book by the poet laureate of West Virginia, Marc Harshman.

“Appalachian Reckoning” is a collection of essays and creative writing published recently by West Virginia University Press. The book is intended as a response to the controversial best seller, “Hillbilly Elegy.”

Derek Krissoff is director of West Virginia University Press. “We look for authors and work that reflect the diversity of Appalachia’s demographics, including its racial and ethnic heritages, LGBTQ community and cultural issues,” he said.

In 1978, Jim Comstock, editor and publisher of the West Virginia Hillbilly, wanted to support West Virginia author Davis Grubb and reprint his book, “The Night of the Hunter.” To do that, he started Mountain State Press, raising $40,000 and purchasing a printing press. Although he never reprinted that book, Comstock’s publishing company did reprint Grubb’s book “A Tree Full of Stars.”

Mountain State Press went on to become a pioneer in the state’s small press industry. The nonprofit publishing company has printed 80 titles at last count, and continues to follow Comstock’s vision to promote writing in Appalachia with an emphasis on West Virginia works.

In 1980, Phyllis Moore was researching West Virginia literature. She hoped to get more books about West Virginia into schools and local libraries. As her collection grew, Moore had visions of a Mountain State literary map. Funding was found, a statewide committee formed, and the state’s first literary map became a reality.

When her collection outgrew the Moores’ home, the items were donated to the Frank and Jane Gabor West Virginia Folklife Center at Fairmont State University. The James H. and Phyllis Wilson Moore Literary Collection includes books, photographs, posters, author interviews, PowerPoint programs, essays and files that are available to the public.

Cat Pleska, a West Virginia author and president of the Mountain State Press board, said these efforts — along with the work of publishing companies, universities and authors — are important for the Mountain State’s literary culture.

“As a writer and an author, I know how difficult it can be to work on a manuscript, go through the publishing process and sell a book,” Pleska said. “Fortunately, we have a literary community that works closely with writers and gives them hope and support to reach their publishing visions.”

Along with e-book and audiobook formats, printed books continue to be strong in consumer markets. According to German-based Statista, the book industry in the United States saw sales of 675 million print books last year. The company said 74 percent of U.S. adults purchased at least one book in the past year and 98 percent of them said they purchased those books for pleasure, spending about $100 dollars annually on books.

Bill Clements of West Virginia Book Company was working at TransAllegheny Book Store in Charleston in the mid-1990s. He saw the growing interest in local and regional book titles as customers came into the bookstore asking for books on West Virginia.

“At the time, there was a strong interest in mountain biking books and there were none available,” said Clements. “It dawned on me that I could publish books about the state.”

His company’s first book, out in 1995, was about mountain biking in West Virginia. At first, he would contact authors about publication. Soon, the authors were reaching out to him.

Farther north, West Virginia University Press had been operating since the 1960s, quietly producing specialized publications. In the early 2000s, WVU Press stretched its mission to include publication of books about West Virginia’s culture, places and people.

“When WVU Press expanded its program, the rationale was that West Virginia University can and should make scholarly contributions and offer publishing services that will benefit the state and its people,” said director Derek Krissoff. “We look for authors and work that reflect the diversity of Appalachia’s demographics, including its racial and ethnic heritages, LGBTQ community and cultural issues.”

The Frank and Jane Gabor West Virginia Folklife Center was established under the leadership of professor Judy Prozzillo Byers, a Fairmont native. Today, Francene Kirk, interim director, says the center is a place of study that offers exhibits, outreach programs and houses minor degrees in music and folklore.

“Just as the Augusta Folklife Center at Davis & Elkins is the center for folklife music, I would like this center to house the stories of our state — collecting stories, creating digital files and expanding on the literary trail as we add other collections as well,” she said. “We reinforce our storytelling mission with our speakers’ series that features West Virginia authors and authors who write about West Virginia and Appalachian culture. The literary map is one of our largest collections.”

Moore — whose career was in the medical profession — found her love of reading led her to writing essays and book reviews on West Virginia books for Southern Literary Review, Traditions of West Virginia and other publications.

“The literary map was designed by my husband, Jim, and is called ‘From a Place Called Solid: West Virginia and its Writers,’ Moore said. “It highlights West Virginia authors and their writing from 1863 to 2003, along with a site associated with them or their work and a literary distinction. I believe they are samples of some of the most significant imaginative literature written by West Virginia authors.”

The collection includes a listing of West Virginia writers to 2003 in six genres: children/young adult literature, drama, fiction, memoir, poetry and screenwriting. It also includes documents, posters, books and interview sheets. Printed copies of the map can be ordered through the Folklife Center at fairmontstate.edu/folklife/west-virginia-literary-map.

The writing community in West Virginia is a close-knit one, according to Pleska. “There are many writing groups around the state where we can encourage each other.”

“We all write at our own pace and in our own time,” she said. “It’s good to sit down with a group where we share our work and offer suggestions for improvements or ask questions that can help direct a writer.”

The work that she does with Mountain State Press is an extension of her involvement with the writing community and her interest in mentoring writers.

“We operate as a literary press, from accepting a manuscript through editing and production and distribution,” she said. “Some books stay in print for many years, like ‘House Call in the Hills,’ a memoir of Raleigh County doctor Jay Banks. Medical students at East Tennessee State read the book in one of their classes.”

Mountain State Press has published two anthologies in which West Virginia writers share their perspectives on national issues. “Voices on Unity: Coming Together, Falling Apart” is a collection of essays, stories, poems and song in which the contributors write about what it means to be a voice for a culture, society, community or country. In “Fearless: Women’s Journeys to Self-Empowerment,” women share essays, poems and stories about pivotal moments in their lives when they found the wisdom to endure challenges and fight for survival.

At West Virginia Book Company, Clements has a three-step process for book publications.

“While I might still seek an author out, we have many writers pitching stories to us now,” he said. “We ask them to submit a synopsis of their book and we review it to see if it fits within our criteria. Once that happens, we accept the manuscript and offer suggestions. After that, we go into design and publication processes before we begin the distribution process.”

West Virginia Book Company, like other publishers in the state, works with its distribution and communications networks to set up book signings and speaking engagements.

“Over the years, we’ve seen the markets change,” said Clements. “Ghost stories, folk life, Civil War and cooking publications continue to be popular, but outdoor recreation books are not as popular as they once were, because people use electronic devices and phones to plan hikes, rides and outdoor activities.”

Clements says coffee table books like those by photographer Steve Shaluta and writer Jeanne Mosier hold their popularity. “We get calls from people who no longer live in West Virginia but who are looking for certain books about the state, and we are glad to help them out when we can,” he said.

At West Virginia University Press, the staff looks for opportunities to do books that allow West Virginians to share their perspectives. Recently, the publishers issued “Appalachian Reckoning” as a response to the controversial “Hillbilly Elegy: A Memoir of a Family and Culture in Crisis” by J.D. Vance.

“Each author had a story to tell and there were many perspectives on the topic Vance chose to write about,” Krissoff said. “In ‘Appalachian Reckoning,’ there is a series of responses in which Appalachian writers share their perspectives and counterpoints to the memoir.”

In another instance, the university press reissued “The Book of the Dead” by Muriel Rukeyser. First published as part of her 1938 volume, “U.S. 1,” it commemorates the Gauley Tunnel tragedy, also known as the Hawks Nest Tunnel disaster. Krissoff said reprinting the poem served to shed light on an underrepresented community.

West Virginia University Press focuses on Appalachian studies, creative works, higher education and energy and the environment. Krissoff believes that often these key topics overlap, and because the staff is thoughtful about each work published, the organization is one of the top university presses in the country. “As the largest book publisher in the state, we have opportunities to reach national audiences through our connections with the New York Times, Wall Street Journal, The Atlantic and Harpers,” he said.

Like Pleska and Clements, Krissoff acknowledges that self-publishing has appeal for some authors, and that changes the face of the publishing game. But when writers meet with any of these organizations, they get solid advice on which other state publishers might be able to help them if their publishing house cannot.

“We want to create bonds with creative people,” Krissoff said. “We are all working together to amplify the voices of West Virginia.”

Harrison: WVU has found a bunch of gym rats

Blockchain for A Greener Future: What You Need to Know

BookTrib’s Bites: Stock Up on Some Great Summer Reading Choices