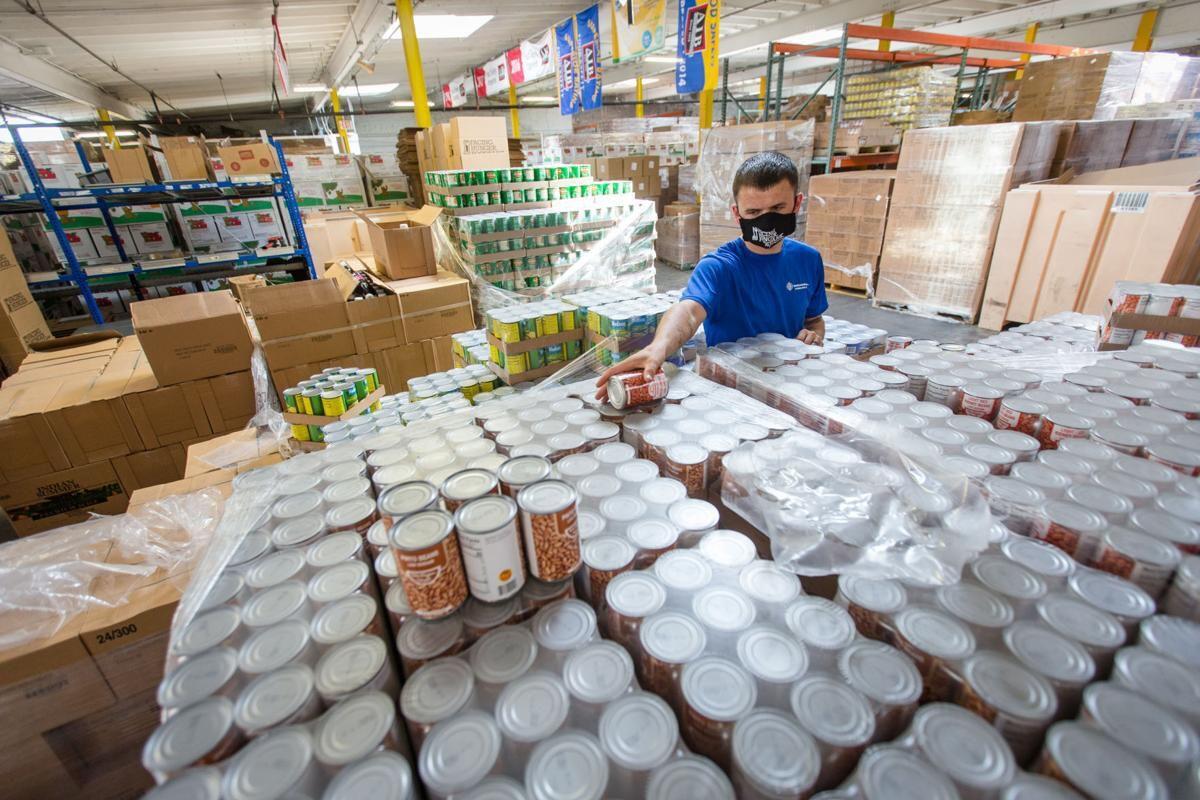 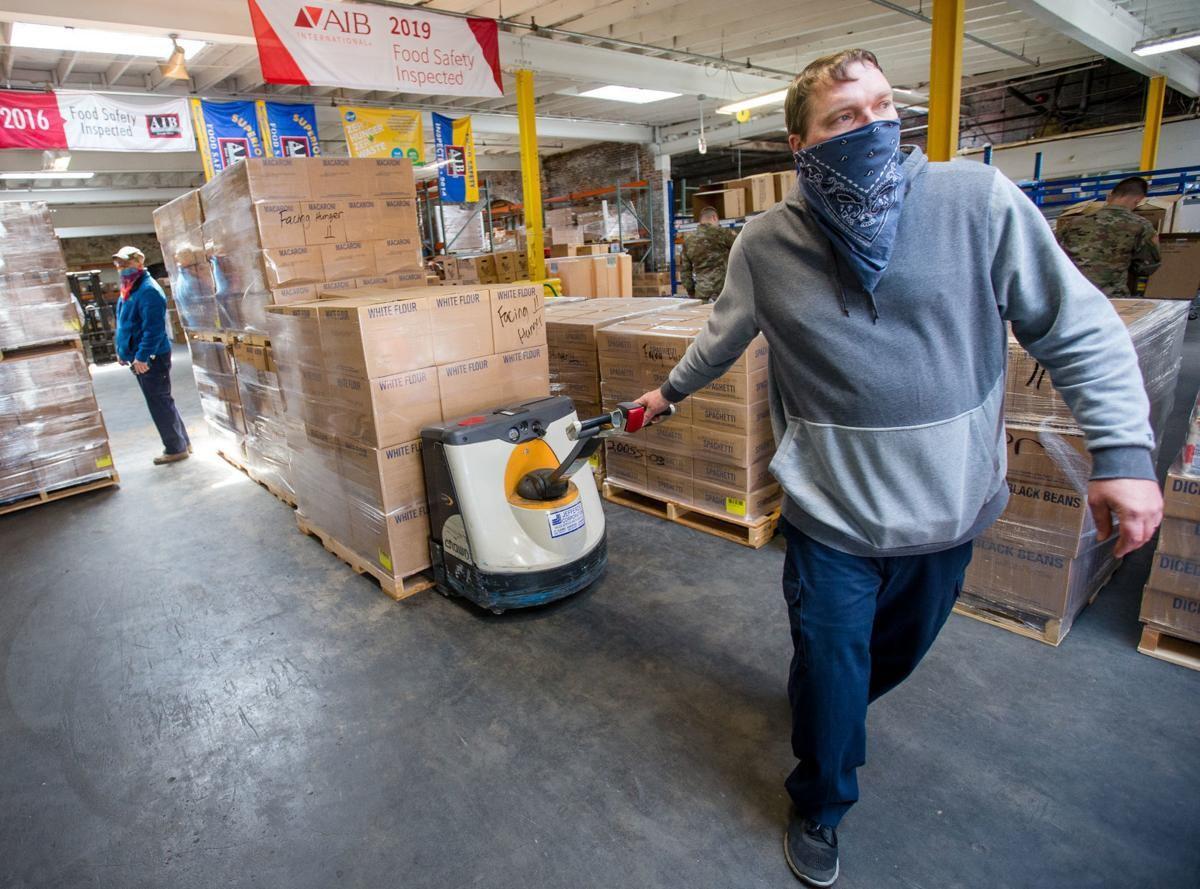 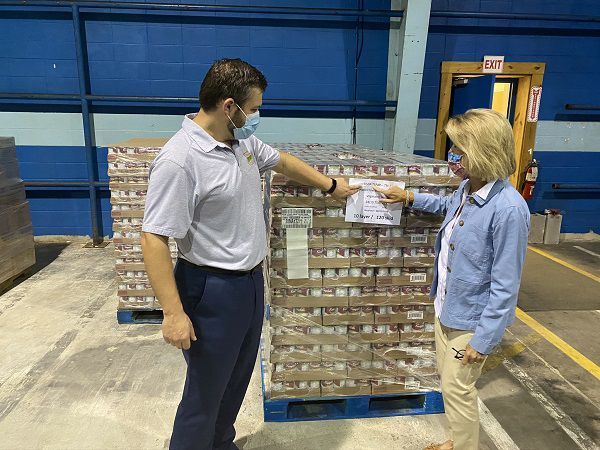 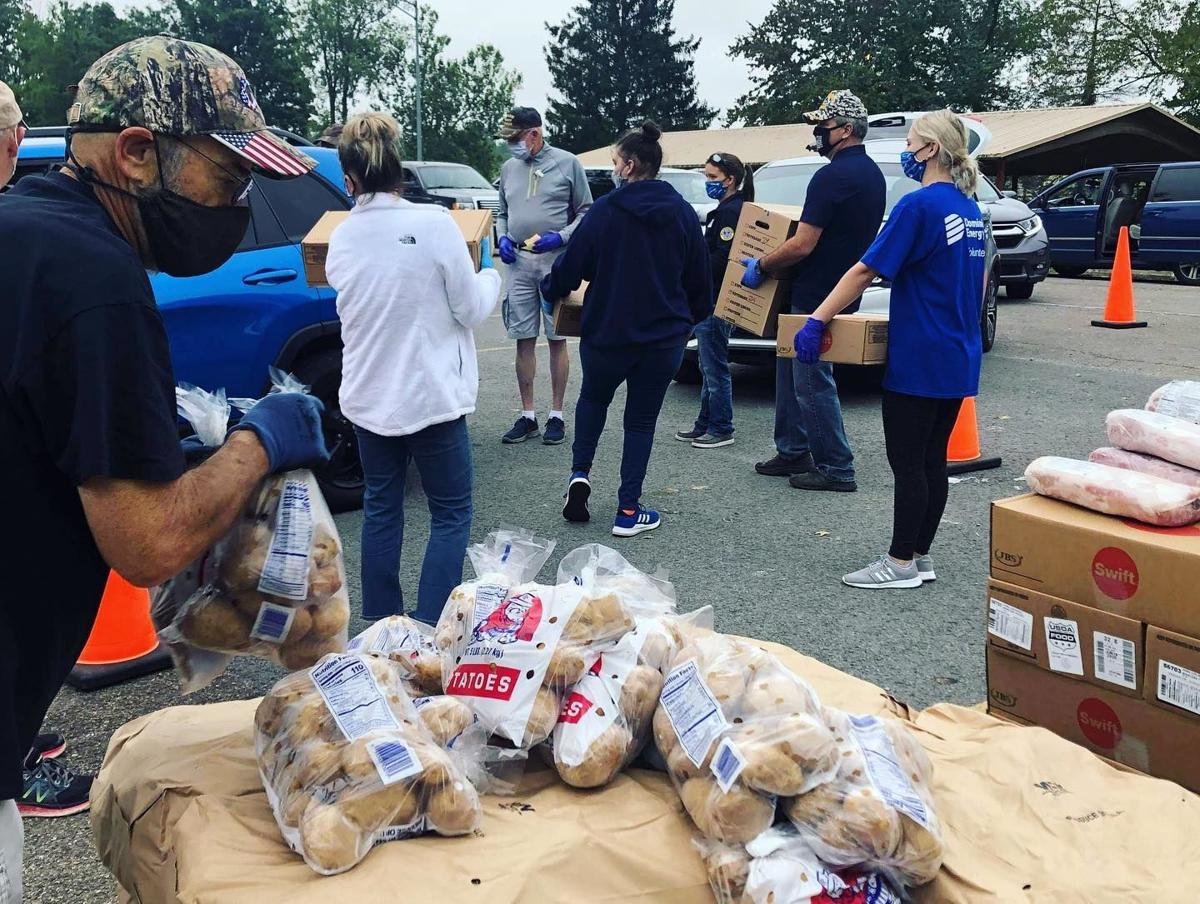 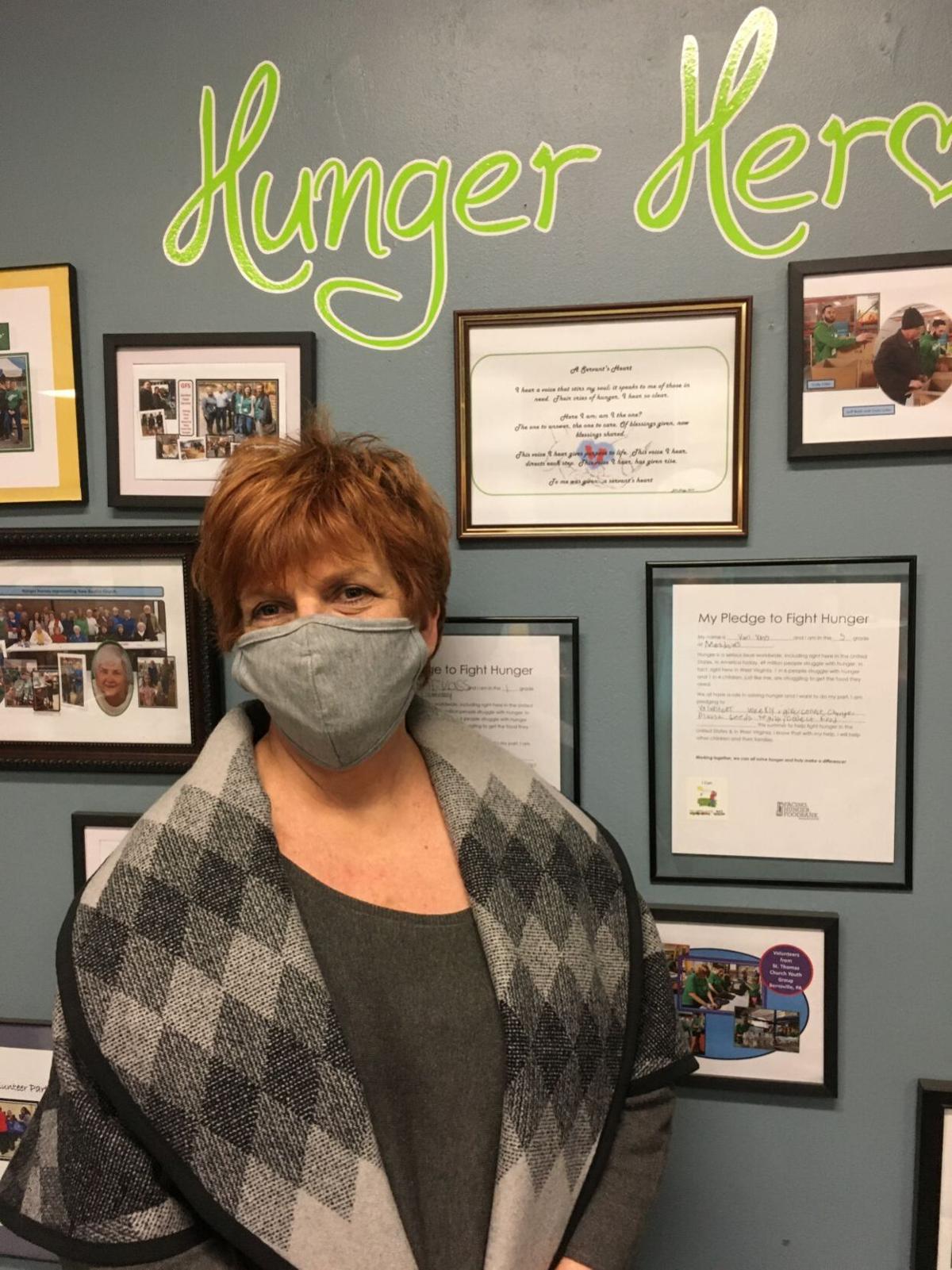 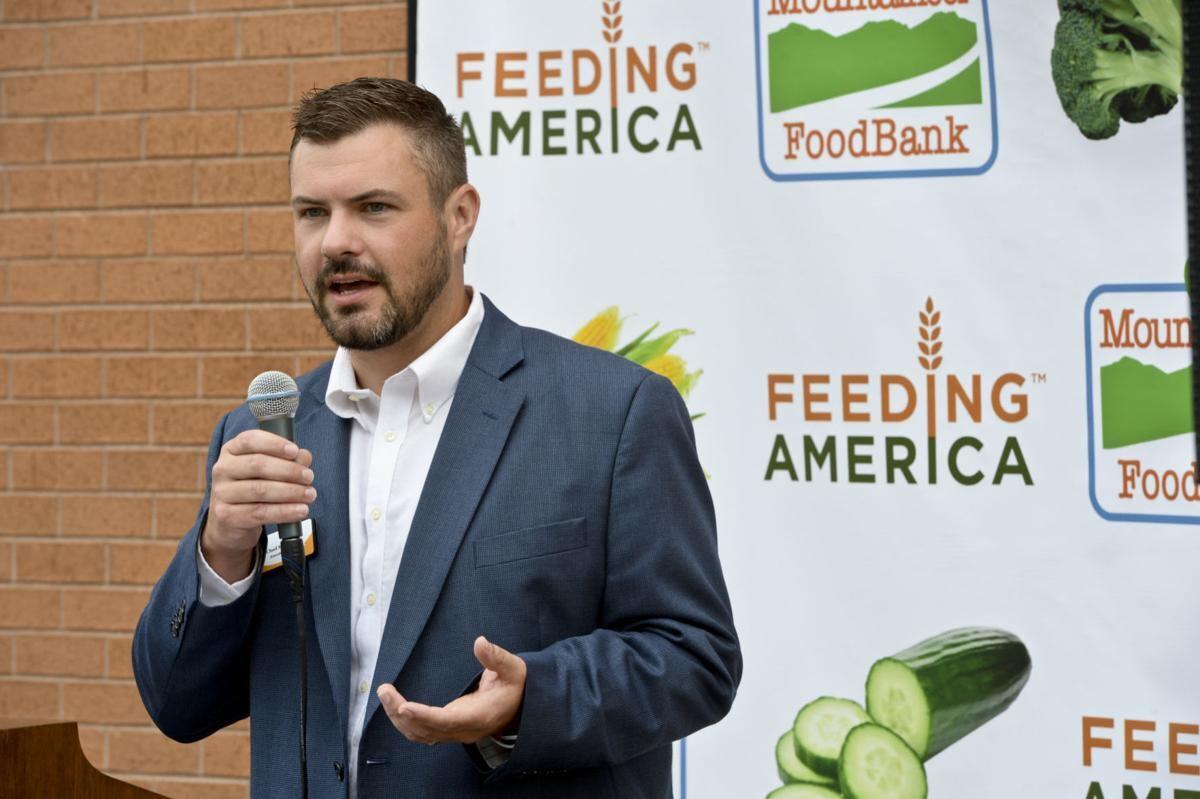 Hunger stalks tens of thousands of people, young and old, in West Virginia.

Feeding America, the nationwide network of food banks, estimates that 250,600 people in the state struggle with hunger every day. Of them, 73,770 are children.

Food banks are an essential link in the effort to feed the hungry. They collect, sort and store a wide array of food items, and then distribute that food to local food pantries, soup kitchens, daycare centers, homeless shelters and other agencies.

Feeding America has two affiliate food banks in the state — Facing Hunger in Huntington and Mountaineer Food Bank in Gassaway.

Here’s a close-up look at each of the two.

Founded in 1983, the Facing Hunger food bank was originally named the Huntington Area Food Bank and initially served only Cabell and Wayne counties.

However, the need was so great across the region that the food bank expanded its service area after just its first year of operation. Ultimately, that expansion prompted the food bank to change its name. Today, Facing Hunger serves 248 agencies located across 17 counties in West Virginia, eastern Kentucky and southeastern Ohio.

In its first year of operation, it distributed nearly 300,000 pounds of food. In recent years, that annual total has shot up dramatically.

Kirkhart, known to family, friends and co-workers as Cyndi, has headed the food bank since 2014. She grew up in the Green Bottom area just outside Huntington and graduated from Barboursville High School. She has two master’s degrees, one from Georgia State University and one from Ohio University.

When the food bank was looking for a new director, the board president, a long-time friend, suggested she apply for the post. “I don’t know how to run a warehouse,” Kirkhart had protested. Nevertheless, she applied and was hired. Since then, she’s surely learned enough about warehouse management to write a book about it.

Facing Hunger employs a full-time staff of 28 people, aided by a varying number of volunteers. “When I started here in 2014, we had 14 workers,” Kirkhart said.

The food bank is housed in an old warehouse building at 1327 7th Ave., located on the edge of Huntington’s downtown business district.

Funds to operate the food bank come from the federal government, foundation grants, donations of cash and product from supermarkets and food firms, and individual gifts — large and small — from concerned individuals who want to extend a helping hand.

The Facing Hunger food bank has received a 4-star rating from Charity Navigator, the nation’s premier charity evaluator. It also holds a spot in the Guinness Book of World Records for the largest donation of baked goods, earned when ViSalus donated 52,000 pounds of its natural “mini-meal” Nutra-Cookies.

Coping with the COVID-19 pandemic

Before the COVID-19 pandemic struck the Huntington area in March, Facing Hunger was feeding 116,000 people in its 17-county service area. By April, that figure had increased by roughly 50 percent.

“Many businesses were being forced to close, people were losing their jobs and no longer were able to put food on their tables,” said Kirkhart. “We quickly found we were seeing thousands of people, many of them seniors, we had never seen before.”

Nor was the soaring demand for food the only challenge the food bank faced as a result of the virus. The pandemic shattered the food industry’s supply chain. Supermarket shelves quickly emptied and a food industry that had generously donated products to food banks were no longer able to do so.

Meanwhile, before the pandemic hit, the Huntington food bank typically utilized 10 to 20 volunteers every day to sort, box and distribute its food. But virtually overnight that number dwindled to no more than five a day, because many former volunteers no longer felt comfortable being in group settings.

“Fortunately at that point, members of the West Virginia National Guard stepped in to help us on a daily basis, taking the place of our missing volunteers,” Kirkhart said. “I’m not sure we could have stayed opened without the Guard’s assistance.” She credited Rep. Carol Miller, R-W.Va., with playing “an integral role in getting the Guard to help us.”

Another change the pandemic brought to the food bank’s operations was a revamping of its mobile pantries.

“Previously, we would put, say, 10,000 pounds of assorted food items on a truck and take it to a rural community. We had buggies and people could take them from station to station, selecting the items they wanted. Then we would help them load it into their car or truck. With the pandemic, we had to change that model. We started pre-packing everything. Kroger, which has always helped us in so many ways, provided potatoes, apples and other perishables. We boxed it all up and had people drive through and collect it. It was all touch free.”

In 2019, the Pallottine Foundation of Huntington (established with proceeds from the sale of St. Mary’s Medical Center) awarded Facing Hunger a two-year grant of $300,000. The food bank allocated that funding to two of its key efforts: a backpack program and a medically-indicated food box program.

The backpack program is offered to students who participate in the free or reduced breakfast and lunch programs at their schools, the goal being to help provide meals for the weekends and weeknights.

The program was first launched in Lincoln County, where Lincoln County Schools originally served 4,000 children per week. The food bank knew that at least 10,000 other children in its region needed food.

The Pallottine Foundation grant enabled the expansion of the backpack program. In its first year, the food bank committed to reach 5,000 additional children, and in year two it hopes to reach a total of 10,000 children.

In each backpack, students receive breakfast, lunch and dinner options for weekends that include vegetables, fruits, less-sugary cereals, shelf-stable milk and other healthy options.

“Teachers are saying that when students have the full backpacks and the availability of food all weekend, they’re coming in brighter on Monday,” said Kirkhart. “They’re performing and behaving better. They’re not as tired. With the security of additional food products, they seem to not dread going home on the weekend, and don’t talk as much about missed meals during the week.”

The food bank has dedicated the second part of the Pallottine grant toward a Medically Indicated Food Box (MIFB) program to address food insecurity for patients with health concerns such as diabetes, hypertension and end-stage renal disease.

To donate to Facing Hunger, or learn more about it, go to the website at facinghunger.org.

When Mountaineer Food Bank (MFB) was created in 1981, it was placed at Gassaway in Braxton County due to the community’s central location in the state. Over the years, it has become the largest emergency food provider in West Virginia, distributing more than 20.7 million pounds of food annually.

Chad Morrison has been the executive director at MFB since 2015. Morrison started at the food bank in October 2008 as food resource coordinator. In 2012, he became director of development, primarily working on grants, direct mail and the mobile pantry program, along with the food resourcing. He has a bachelor’s degree in sociology and anthropology from West Virginia University and earned a master’s degree in sociology in 2012.

Since the COVID-19 pandemic began, the need for food among those struggling has increased dramatically. As businesses closed, many people found themselves suddenly jobless and no longer able to put food on their tables.

“We’ve seen about a 30 percent increase in demand for food assistance across our footprint,” Morrison said. MFB is working hard to meet that ever increasing need, he said.

At the same time, concern about the spread of the virus has forced MFB to trim the number of volunteers working at its Enterprise Drive warehouse.

At that point, the West Virginia National Guard stepped in to help, as they did in Huntington. A dozen WVNC soldiers worked at the food bank, putting in 11-hour days, dining at the nearby Gassaway WVNG Armory and lodging at a motel a short distance from the warehouse.

Working together in assembly-line fashion, the soldiers loaded cardboard boxes with canned, boxed and fresh proteins, fruits, vegetables, pasta, cereals and other food items. It’s estimated each box can feed a family of four for three to four weeks. Each day the Guard members assembled about 1,200 boxes and stacked them on pallets.

“The Guard really stepped up for us,” Morrison said.

MFB long has had a busy schedule of mobile pantries, with supplies of food trucked to communities in the food bank’s 48-county region and put on display, where people could view it and pick what items they wanted.

COVID-19 concerns have forced food banks to alter the way mobile pantries operate. Now, pre-packed food boxes are distributed in a drive-through style. Each vehicle receives a 40-pound box of food that includes items with a long shelf life, as well as frozen products.

Its growth has prompted MFB to open a second warehouse in Weston. Giving Sen. Shelley Moore Capito, R-W.Va., a tour of the new warehouse before its grand opening, Morrison explained that it will be a big help in better serving families and individuals struggling with food insecurity in the food bank’s region.

In October, MFB received a big boost when natural gas producer Antero Resources announced that its charitable foundation would be matching up to $150,000 in donations to the food bank.

To donate to Mountaineer Food Bank or learn more about it, go to mountaineerfoodbank.org.

Again this holiday season, Kroger stores in West Virginia are conducting their Feed the Hungry campaign.

Bill's Best: The best candy bar you'll ever eat (if you can find it)

WVU basketball: ESPN projects Mountaineers as a No. 4 NCAA seed