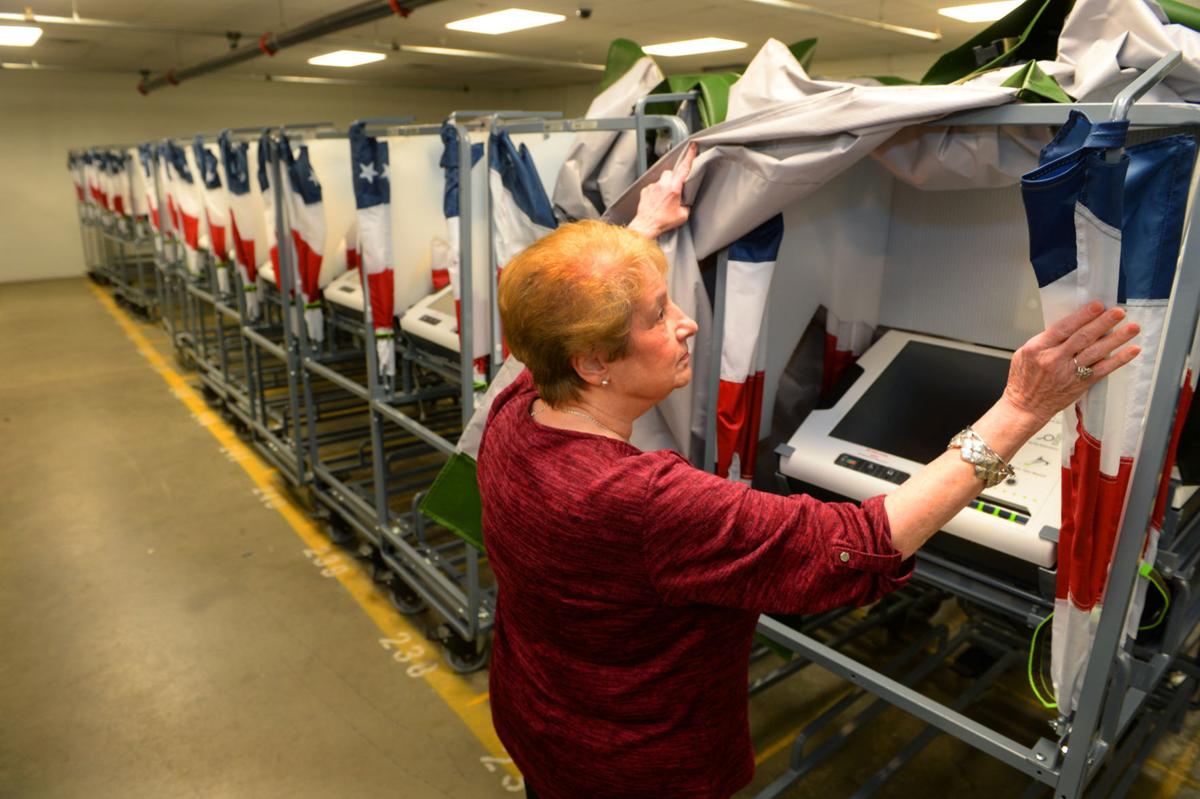 Kanawha County Clerk Vera McCormick looks over voting machines that are stored in a warehouse in Charleston. “I think security has always been on the minds of the people who run elections,” she said. “The public is concerned, and rightfully so. They want questions answered, and I think they should have them.” 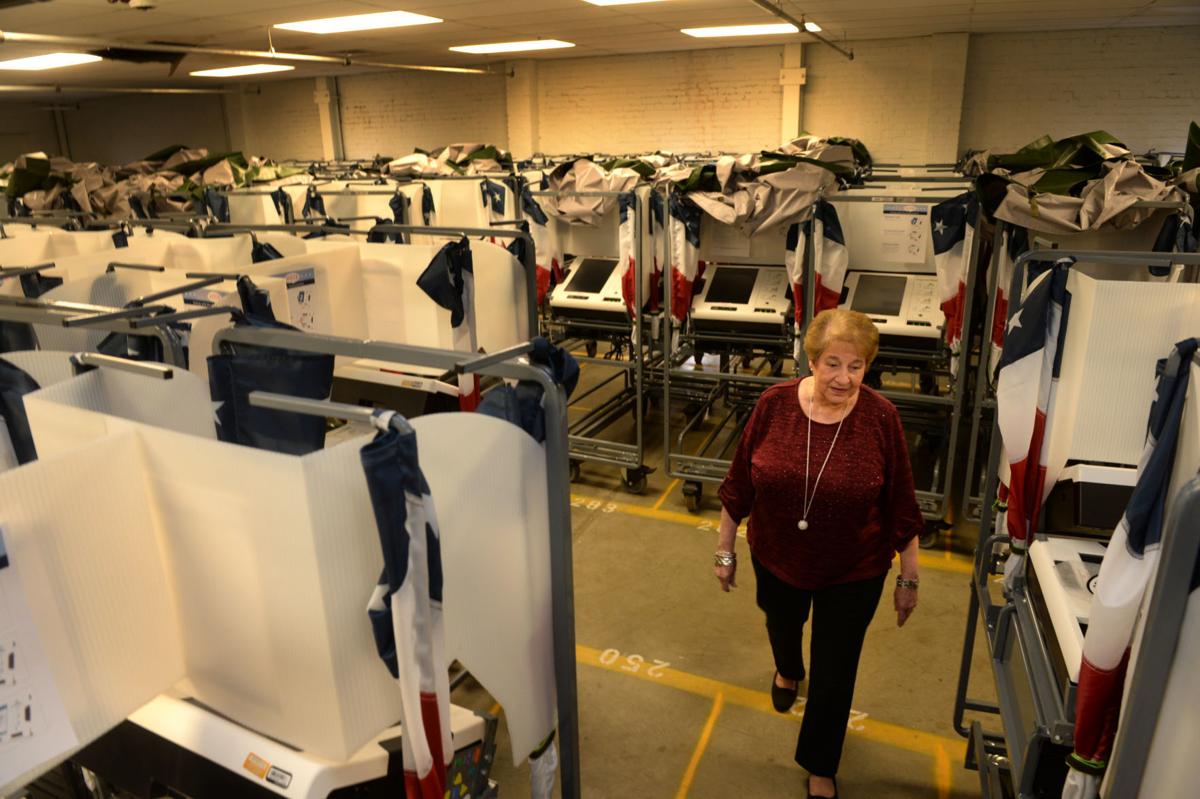 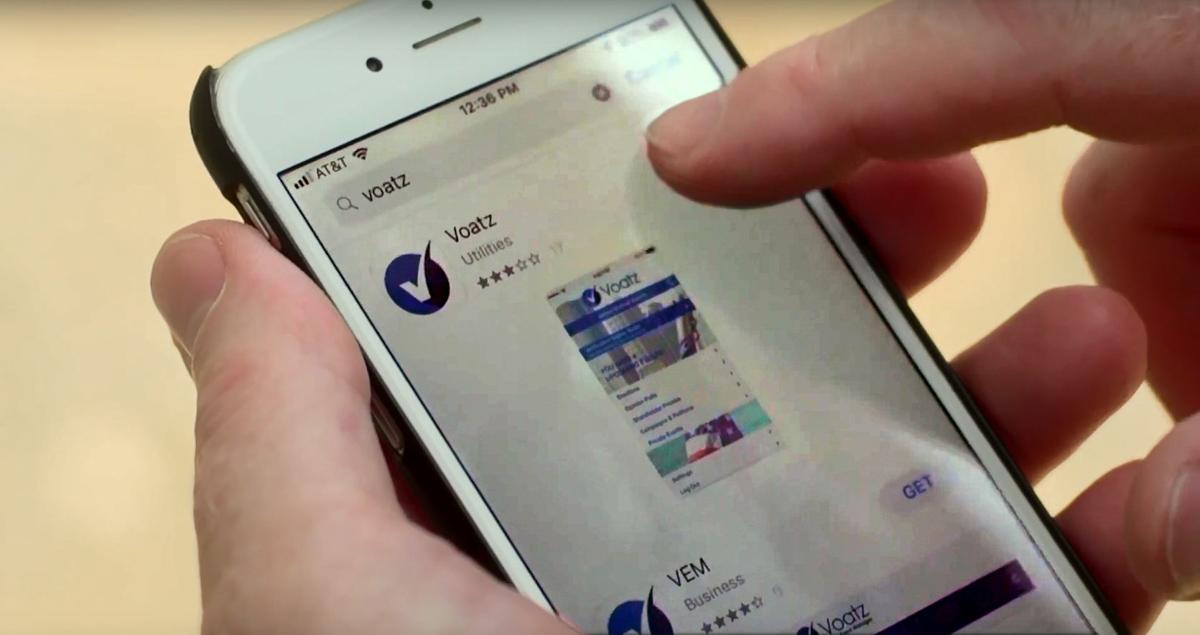 The secure mobile voting app, Voatz, can be downloaded to a smartphone through an app store. Instructions for using the app can be found on the Secretary of State’s website at sos.wv.gov/elections. Right now, mobile voting is only available for West Virginia voters in the military and living overseas. 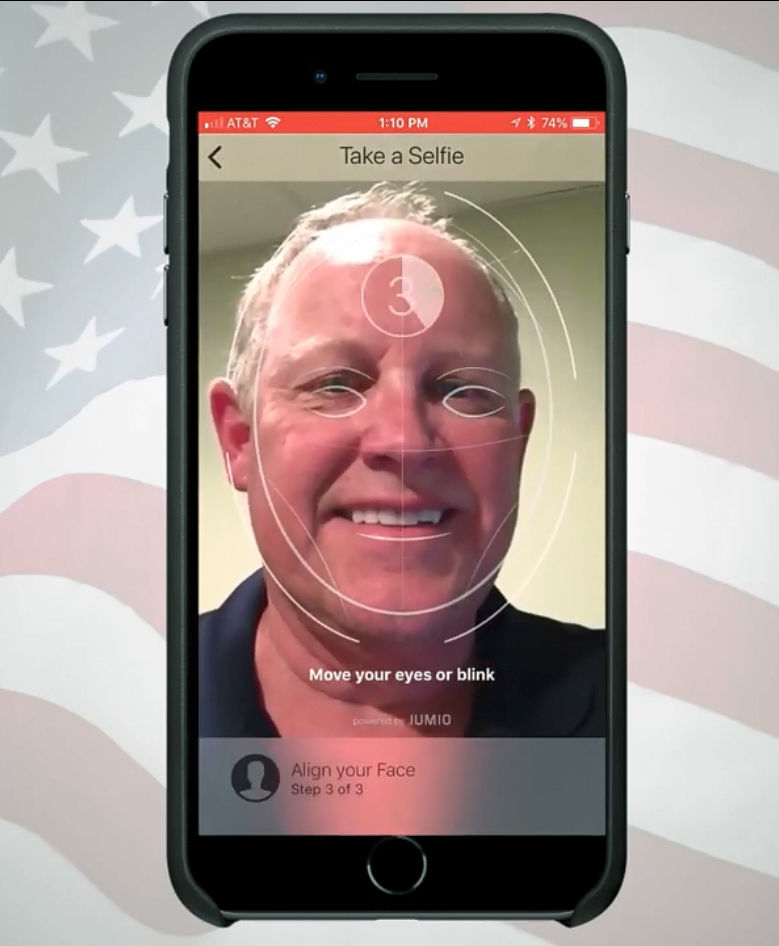 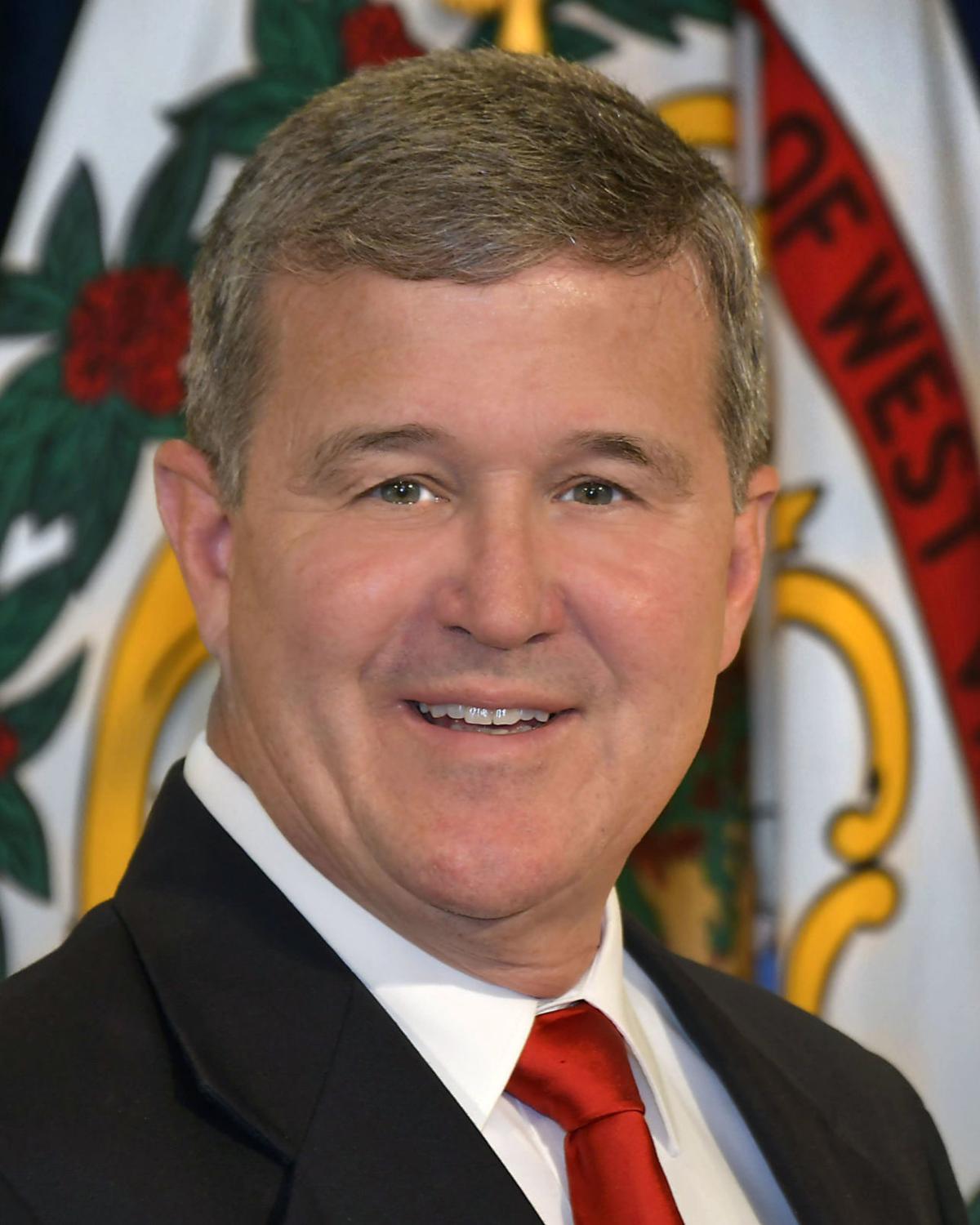 Kanawha County Clerk Vera McCormick looks over voting machines that are stored in a warehouse in Charleston. “I think security has always been on the minds of the people who run elections,” she said. “The public is concerned, and rightfully so. They want questions answered, and I think they should have them.”

The secure mobile voting app, Voatz, can be downloaded to a smartphone through an app store. Instructions for using the app can be found on the Secretary of State’s website at sos.wv.gov/elections. Right now, mobile voting is only available for West Virginia voters in the military and living overseas.

In the basement of the Capitol, a West Virginia National Guard “asset” with a national security clearance monitors the state’s election system for security breaches. Just weeks ago, it was put to the test when this watchdog picked up some foreign interference looking to penetrate the voter registration system.

Fortunately, that foreign interest was unable to breach it, but the intelligence gathered right in Charleston was shared nationwide within 24 hours through the Department of Homeland Security. The alert determined that similar breaches occurred in Ohio and Colorado.

“The system is working,” West Virginia Secretary of State Mac Warner said, noting national concern over a repeat of 2016, when Russians reportedly hacked the presidential election.

This new monitor’s role is funded with federal government money allocated to states, including West Virginia, to improve election security in a much-watched year for voters. Congress and federal agencies have ramped up their focus on ensuring that cybersecurity is a top priority, rallying state authorities to share information and engage in a show of unity.

Warner said much has changed for the better in the past two years.

“Three years ago, folks hadn’t heard of cybersecurity. Now, it’s all we talk about,” said Warner, who described the dramatic changes nationwide, particularly in the past 18 months, as a result of a federal refocus.

Warner, a U.S. Military Academy graduate who took office in January 2017, touts West Virginia’s role in taking the lead on voting security at the state level.

“A lot of what we are doing is being used across the nation, and it has become a model and the standard,” Warner said.

He serves as a co-chairman of the National Association of Secretaries of State Elections Committee. The group represents a collaboration across the federal, state and local ranks to share information and create protocols for threat assessment and response, and resources.

“Only when state, federal and local officials work together to combat threats against election systems will we be best equipped to deliver a safe and accurate vote tally on election night,” Warner said after his appointment last August.

In Washington, the Republican-led Senate approved $250 million in election security funds for the states in September 2019. It was considerably less than the $600 million proposed by the Democrat-led house. Of that, West Virginia’s share for this election cycle is $25 million, and “we’re ready to spend it” to continue to improve, Warner said.

A 2018 study of state readiness by the Center for American Progress, in Washington, D.C., gave West Virginia a C grade on its election security. No state in the study received an A. However, the public policy think tank said it has not measured improvement since its findings were released two years ago.

Danielle Root, the center’s associate director of voting rights and access to justice who helped to compile the study, said all states are paying attention to the issue after Russian hacking reports from 2016 forced the United States to make election security a priority.

“What we learned in terms of foreign interests heightened everyone’s awareness across the country and got officials at all levels to take part in important concrete steps,” Root said. “Since the 2016 election, officials and governors have really made election security a priority. We’ve seen that nationwide, a lot of cybersecurity upgrades made in relation to the next election.”

Those include new voting machines, requiring some form of paper copy, or feeding ballots directly into the machine after someone casts a vote.

“A lot of states switched over to using paper ballots or a form of machine that produces a paper copy that voters can hold in hand, and then confirm that what they have marked by hand represents their actual choice before the ballot is submitted,” Root said.

They also have seen some jurisdictions adopt post-election audits and risk-limiting audits, she said, calling these extra steps “encouraging.”

“They are critically important, because they can confirm if they are done correctly and that the recorded election outcomes are accurate,” she said. “You can implement the use of paper ballots and have strong cybersecurity protection for machinery, but if you don’t do post-election audits — and strong and robust audits — it doesn’t mean a lot if you don’t have a system for going back to check about what your machines and election system are reporting are the election results.”

Some states conduct eye-to-hand checks of all the voted ballots. Others have far more in-depth audits, where they base the number of ballots that are being double-checked on a statistically significant formula, Root said. “It can be simple or sophisticated.”

‘The public is concerned’

In Charleston, Kanawha County Clerk Vera McCormick noted that, while election officials here have always been focused on ensuring proper election safety, this year, “cybersecurity is the talk — all the time.”

Kanawha County houses its election equipment in two locations. Cameras, which had already been used in her office, have been added to their warehouse. Election results are tabulated with data sticks that have security codes on them.

“We always try to improve,” she said. “If we hear of something, we check it out.”

McCormick, who has served as clerk for 16 years, wanted to assure voters that voting equipment is not connected to the internet.

“None of the equipment ever goes online for voters,” she said. “The tabulating computer cannot be connected to the internet.”

“There is nothing going out. If anybody would hack anything in our elections, it would be on the server at the Secretary of State’s Office. That would just be personal data — voter registration information.”

Her office conducts multiple pretests before elections to ensure they are ready to go. Once the internal tests are complete, they conduct a public test and an equipment test. If things are in order, the county commission and the clerks sign off on it and everything is locked up.

The room where votes are tabulated has four locks on it, she said. Three designated commissioners and the county clerk are the only ones with keys. After election night, the room is locked up again with the data sticks, until they hold a canvas to certify results.

“I think security has always been on the minds of the people who run elections,” she said. “The public is concerned, and rightfully so. They want questions answered, and I think they should have them.”

West Virginia drew national attention in 2018 with a pilot project of a secure mobile voting app for residents who live overseas and for those serving abroad in the armed forces. It was funded by a philanthropist as a timely way to ensure those living out of the country could cast a vote. Two counties, Harrison and Monongalia, used it in the primary, and 24 counties used it in the general election.

A University of Chicago study found that that mobile voting program increased turnout 3 to 5 percentage points.

The same mobile app option will be used for 2020 races, said Donald Kersey, general counsel in the Secretary of State’s Office who served as the state’s election director in 2018.

“We are offering this to the counties again to use for overseas citizens and military,” he said.

Pending approval by Gov. Jim Justice, the program will be expanded this year to allow voters with disabilities to use the app if they cannot vote in person. The West Virginia House of Delegates passed legislation last week approving the program.

“Our laws for absentee voters did not protect someone who is visually impaired, or needs assistance to vote,” Kersey said. “Away from traditional Braille ballots, many folks are not Braille literate. This application has an ADA-compliant component that allows them to mark, read and return without needing assistance.”

The same group that funded the overseas voter app in 2018, Tusk-Montgomery Philanthropies, has said it will pay for the equipment for disabled voters, saving money for the state and counties that choose to use it.

Paying for cybersecurity advances remains a concern nationwide, Root said. Even as Congress passed funding legislation last year, what she has heard suggests that many states remain “incredibly underfunded” as they try to protect the vote.

“Congress really needs to make election security funding at the federal level and the local level a top priority,” she said. “It can’t sort of be a notch onto appropriations bills, as an afterthought. It needs to be front and center. When we wrote our report in 2018, we talked to election officials at all levels. It was clear in every single interview we did that this was top priority. They were incredibly concerned, doing the research, asking the tough questions.”

She added: “I absolutely do think that election officials are doing everything in their power to make sure the upcoming elections are successful and secure. The most important thing is to get out and vote. I think there are real concerns for something like 2016 happening this year. We can’t let that get in the way of exercising our fundamental right to vote.”