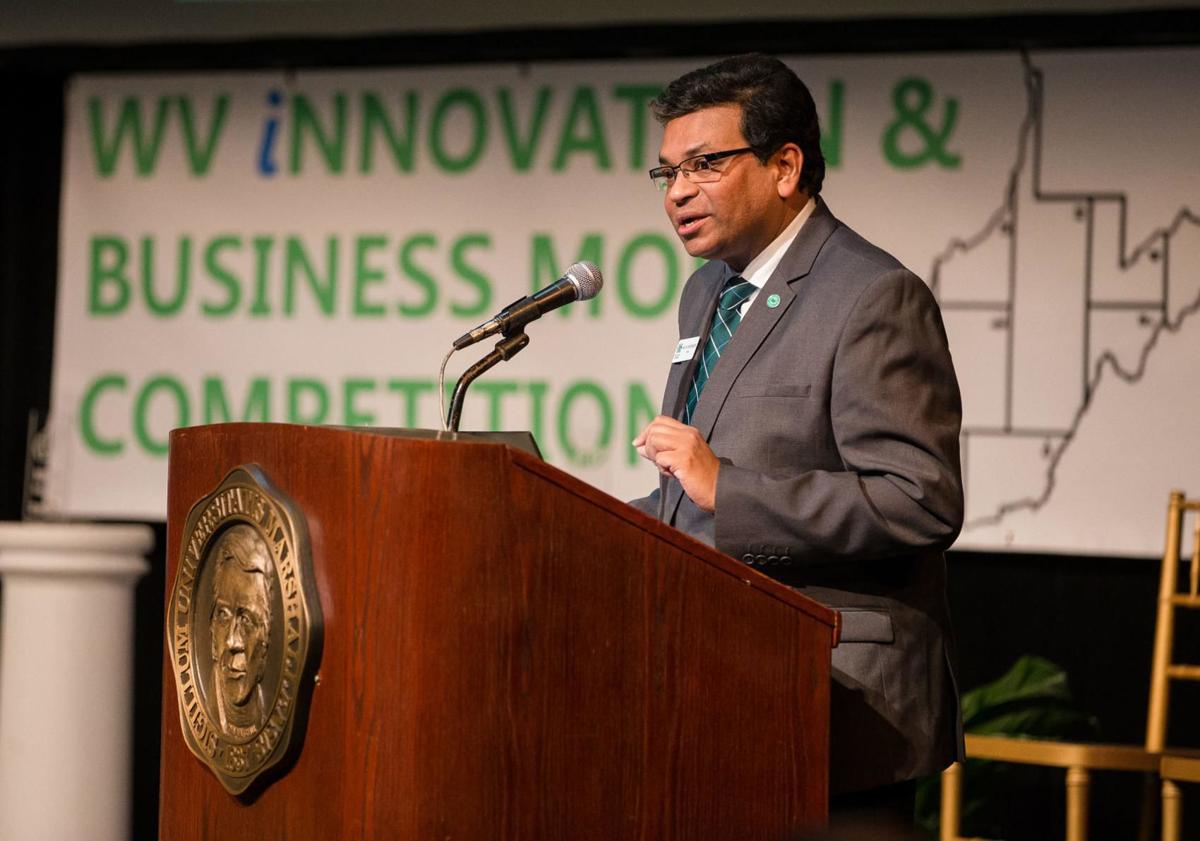 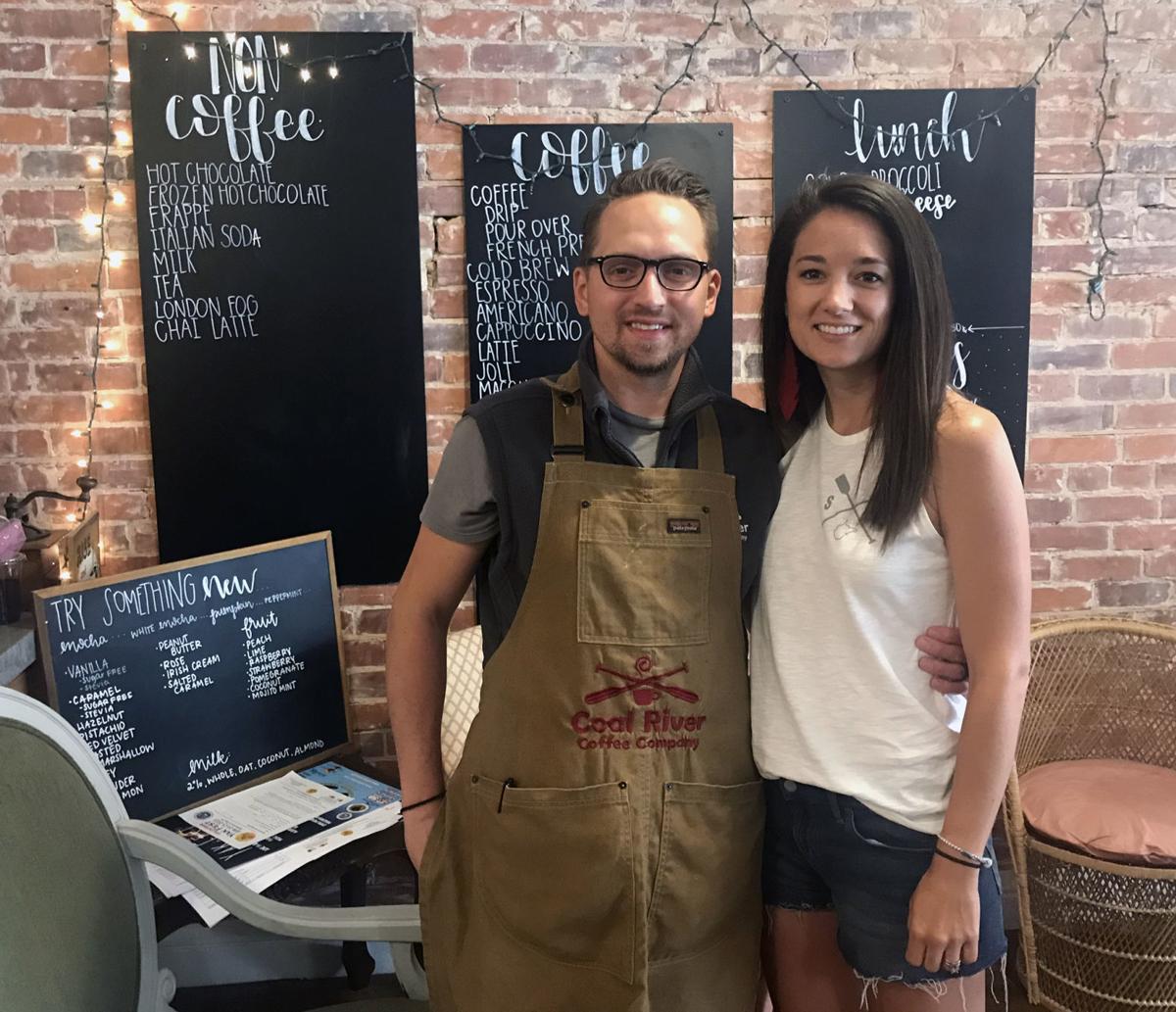 Michael and Rachel Ervin are shown during the first-year anniversary of the Coal River Coffee Company in 2019. Since the closure of their shop in March because of the governor’s COVID-19 health guidelines, they have relied on new strategies for serving customers. 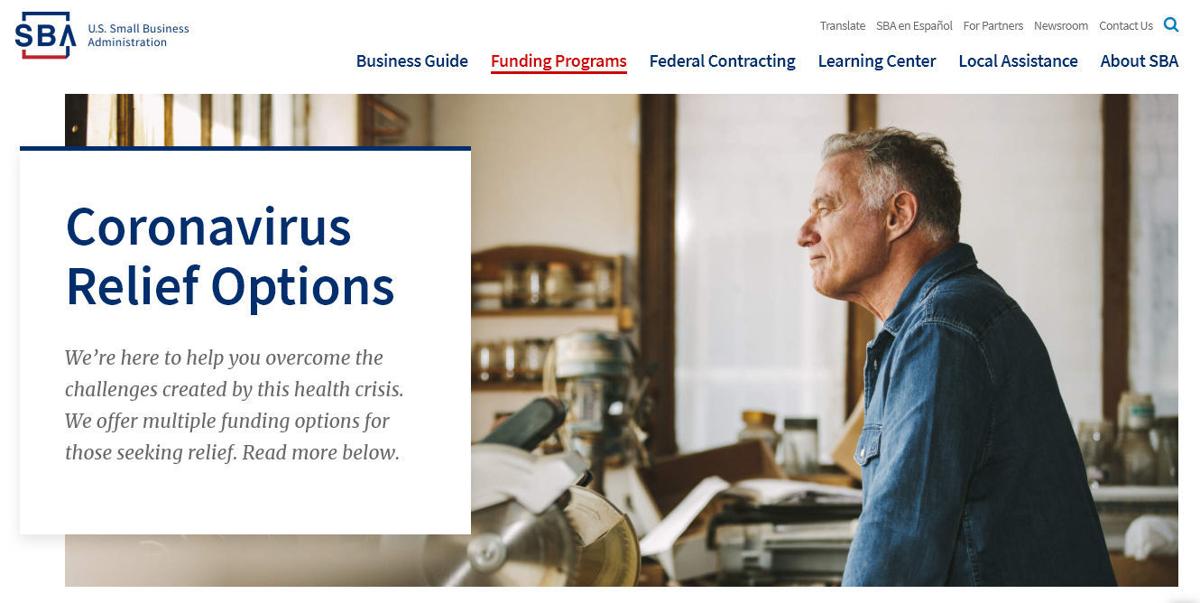 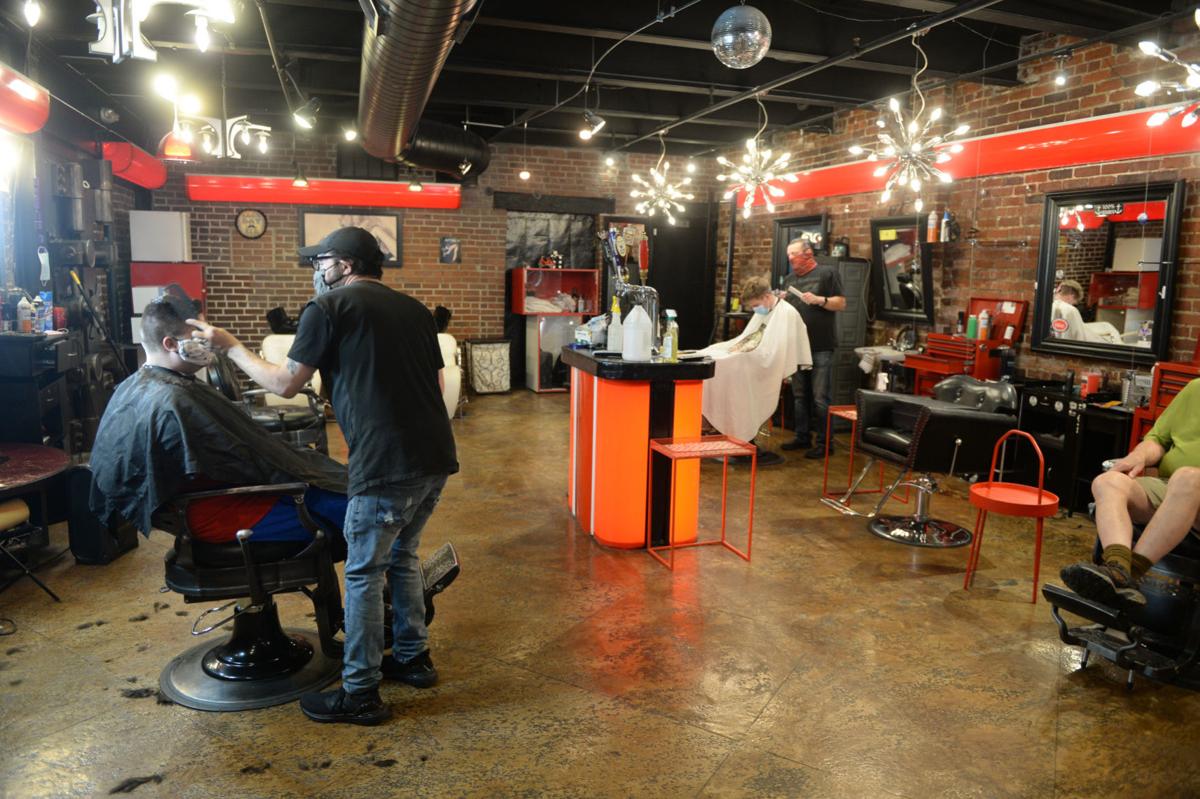 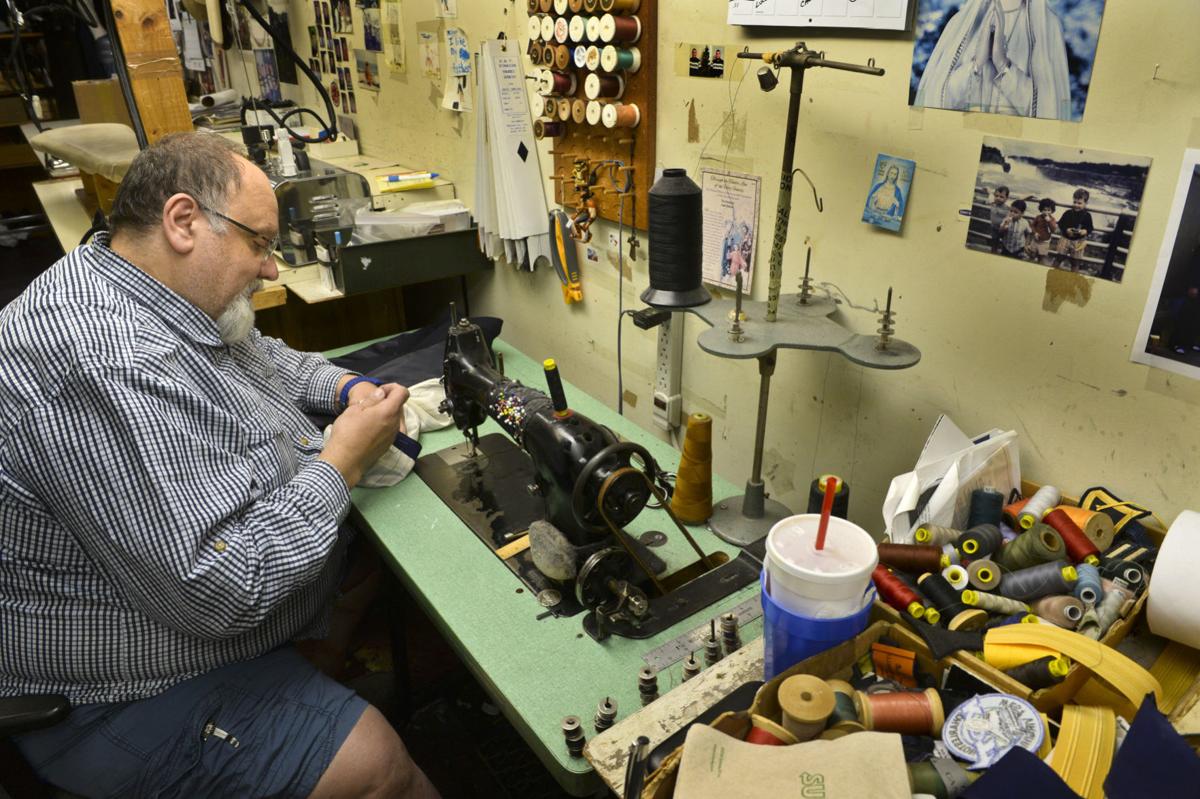 Italo V. D’Alessio works on a suit jacket his first day back after reopening his tailor business with his father on Charleston’s West side.

Michael and Rachel Ervin are shown during the first-year anniversary of the Coal River Coffee Company in 2019. Since the closure of their shop in March because of the governor’s COVID-19 health guidelines, they have relied on new strategies for serving customers.

Italo V. D’Alessio works on a suit jacket his first day back after reopening his tailor business with his father on Charleston’s West side.

A state like West Virginia, where the economy is girded by small businesses, will need the support of residents and loyal customers buying locally to keep its financial future strong post-pandemic.

Many of these businesses were forced to shutter when Gov. Jim Justice issued an order in March for nonessential businesses to close because of the coronavirus.

Now it’s May, and the governor is in the process of easing those restrictions. But many predict that small businesses will struggle to hang on in the months ahead.

In early April, the outlook was increasingly grim. A U.S. Chamber of Commerce study found that 54 percent of all small businesses were already closing or set to close within a week. Of those set to close, 25 percent of owners said they were not going to be able to recover.

“That is a significant amount, aimed at helping small businesses survive for three months or so with the hope that the economy would by then be improving,” Mukherjee said. He added that it would keep employees paid so that they are positioned to quickly come back when they are allowed.

SBA put to the test

The agency overseeing this vast lending program, the Small Business Administration, reported that the first wave of PPP money ran out before it reached many small businesses. This has since been followed by a second wave of $321 billion in funding by Congress. EIDLs also received a second wave of funding.

“Both of these programs (PPP and EIDL) are important, and indeed for many small businesses and nonprofits, the programs are complementary and help meet different needs. However, we are deeply concerned that the SBA is not administering EIDLs with the swiftness and transparency that Congress intended and the current economic crisis demands,” Manchin said in a press release.

Mukherjee says it’s crucial for small business owners to remain optimistic, even in the face of uncertainty. “The key is to look long-term and stay afloat,” he said. “This is not a structural problem in the economy. It’s an external shock that will go away.”

If there is a silver lining amid great fears, Mukherjee thinks the reset is giving smart business owners the time to consider how their current business model might not be serving them and how they might do things better.

“This is the best time for any business to really think about how they are delivering value to their customers,” he said. “Start thinking about how we can redesign and remodel the value process to achieve customer retention and satisfaction.”

Many businesses are already learning they can be nimble and serve their clients in different ways, including a ramp-up of their digital capacities.

Some are seeing that offsite workers can do a good job, and telecommuting may allow new hires far beyond geographical borders.

Others are being more responsive by using technology — home or drive-up delivery of orders placed online, for example — even as their brick and mortar stores are closed.

Thinking outside the bricks and mortar

A case in point is Coal River Coffee Company in St. Albans, owned and operated by Michael Ervin and his wife, Rachel. When the governor’s order prohibited walk-in business at their Olde Main Plaza shop, they adapted by offering drive-thru service in the rear parking lot (available select hours, see sidebar).

They also focused on online and phone orders, where they could ship directly to the customer’s home or arrange pickup at their back door.

Although Ervin applied for small business stimulus funds, he has received nothing as of yet. He missed the first wave of funding, and has been told his application is pending.

“No one knows yet how long they need to ‘hang on,’” she said.

“I would assume that businesses such as dental and optometry would be some of the first to reopen. Unfortunately, retail will be some of the last, but many of Huntington’s retailers have a strong online presence.”

Her city is beginning to explore a loan program “with favorable terms for our retailers.” She is seeking guidance on those efforts from the National Development Council. Huntington has also received additional Community Block Grant funds. “We are exploring using a portion as seed money to assist.”

As cities look to craft a funding stream that will help business owners recover, the state is looking at how it might be allowed to use federal funding to cover what it projects will be a $376 million deficit for fiscal year 2020, which ends on June 30. The state has received $1.25 billion from the CARES Act fund, but as of yet, federal guidelines say those monies may not cover revenue losses.

“I feel really confident that this is going to work out in our favor,” Gov. Jim Justice said at a press briefing on the state’s COVID-19 response.

Prior to the pandemic, West Virginia’s economic outlook was improving. Its unemployment rate in February 2020 was 4.9 percent. By March it was up to 6.1 percent. Nationwide, more than 22 million people have filed for unemployment benefits since President Donald Trump declared a national emergency on March 13.

West Virginia, like many states, has been inundated with people applying for assistance. The governor touted an all-hands-on-deck approach by state workers at one of his daily COVID briefings, saying it has helped to work through a backlog of 150,000 claims.

Under the Pandemic Unemployment Assistance program, workers are entitled to up to 39 weeks of pay at $600 per week. Those who are eligible and have not stepped up to claim unemployment benefits can file at workforce.org.

While some have claimed the cratering economy is akin to the Great Depression, Mukerjee said this is not a good comparison. Although the seriousness of this crisis is “profound,” he urged thoughtfulness and optimism that the U.S. remains well-positioned to fight back to prosperity once health concerns are assuaged and people can return to business safely.

He noted the importance of managing “livelihood and life,” and said the nation’s economic recovery will hinge on its health care sector working on containment of the virus, a treatment protocol and a vaccine.

“The thing to keep in mind is this crisis is not something we did or the government did, not because of someone’s wrong actions. It’s because of something completely extraneous,” he said. “We have been a part of a wonderful economy in a thriving world, and we need to take advantage of that to come back.”

Mukerjee added, “We are in the best place for recovery. There is strong demand. Overall, economic outputs have been good. The foundation was so strong. And that has not gone away.”

Local coffee (and other) shops rely on community for sustenance

For a pair of area coffee- and food-oriented small businesses, Paycheck Protection Program funds — or lack of — have offered a modicum of reli…