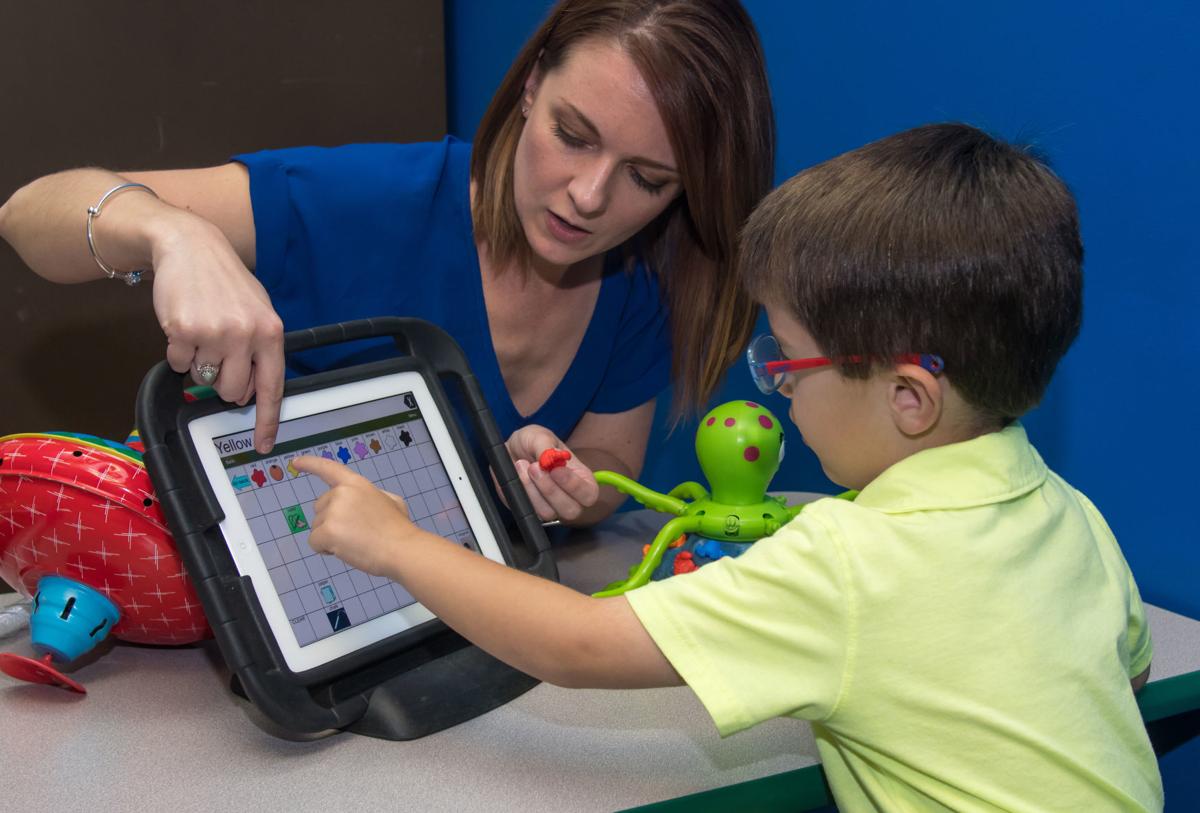 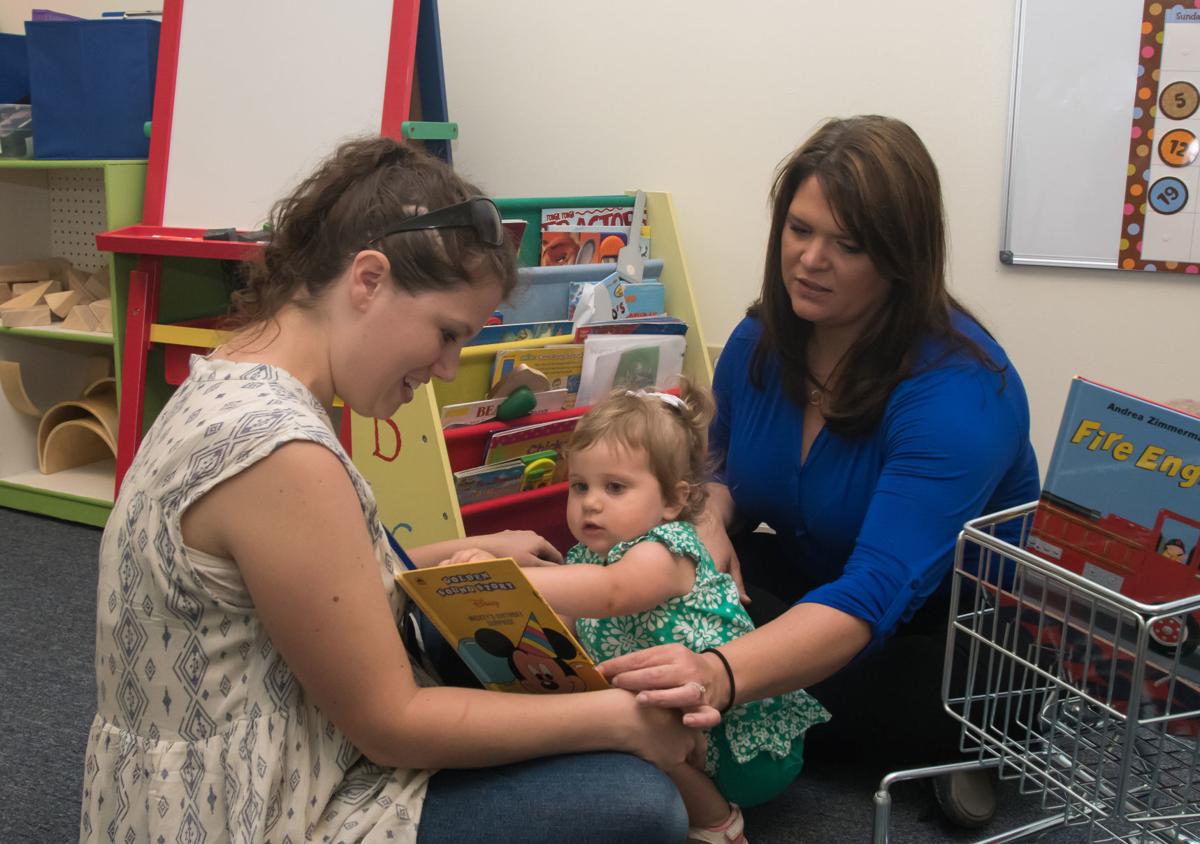 Bright Futures staff often read books to children if the child is inclined to like letters. Reading to them can serve as positive reinforcement. Staff members shown are Kara Thomas, left, and Bright Futures Director Jill Scarbro-McLaury. 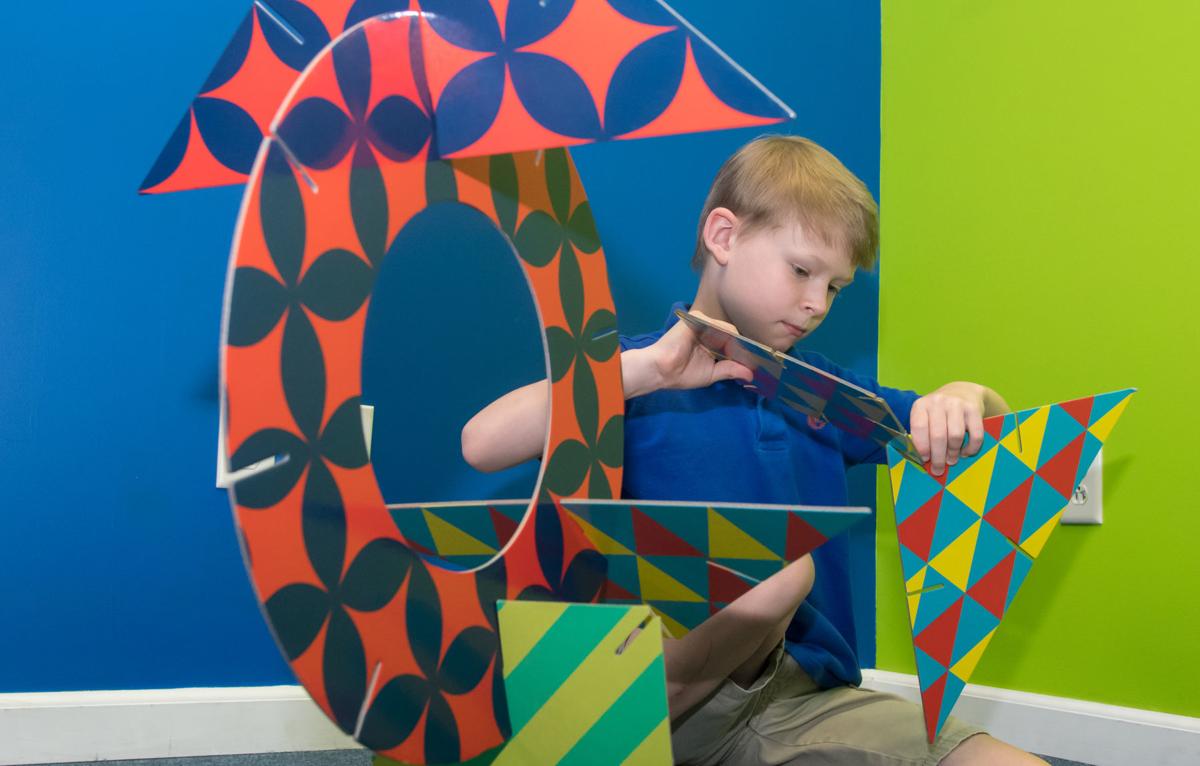 Some children on the autism spectrum have a knack for solving puzzles. ABA programs generally include puzzles as a means of teaching problem-solving skills. Children pictured are not actual clients of Bright Futures Learning Services. 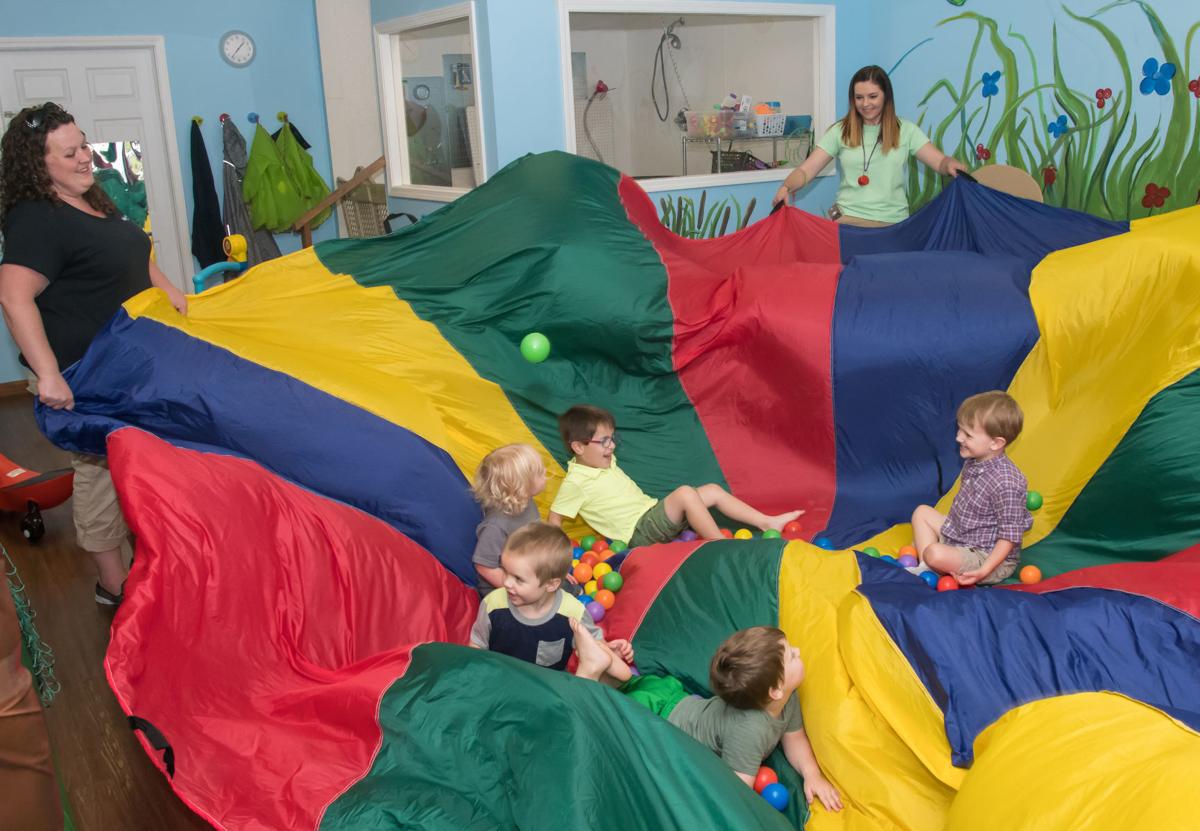 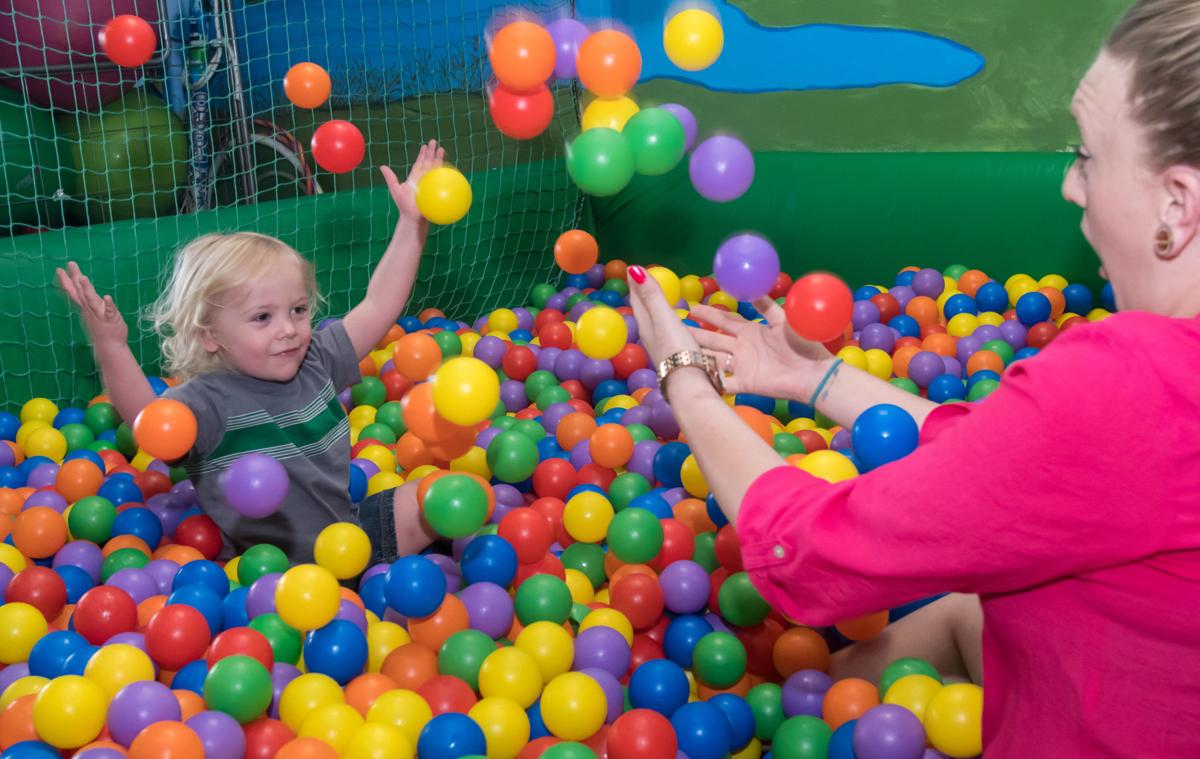 Bright Futures has a ball pit in its play area. Fun activities are an important part of therapy. 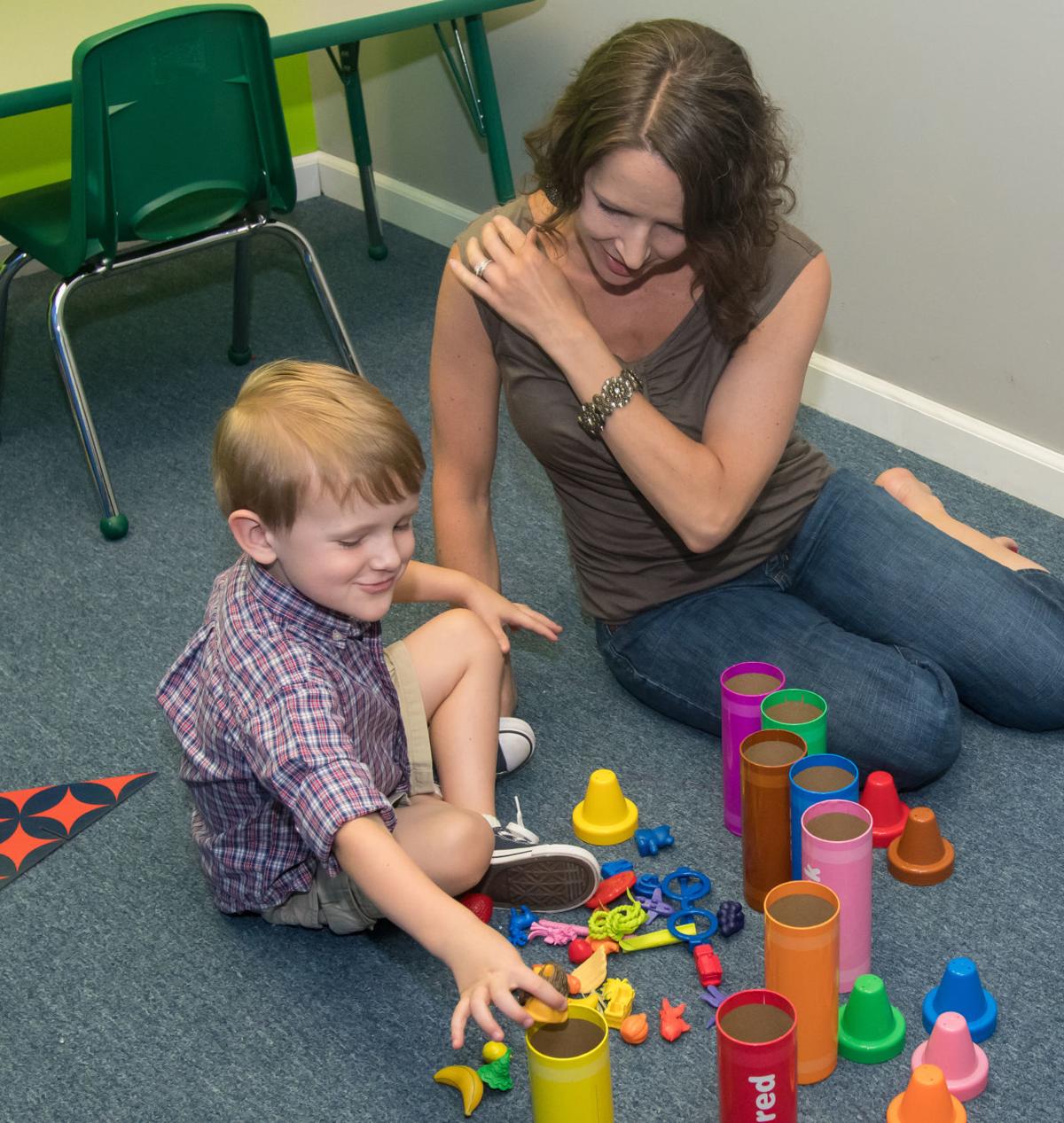 Working with pegs and colored tubes helps children on the autism spectrum to learn distinctions between similar objects. 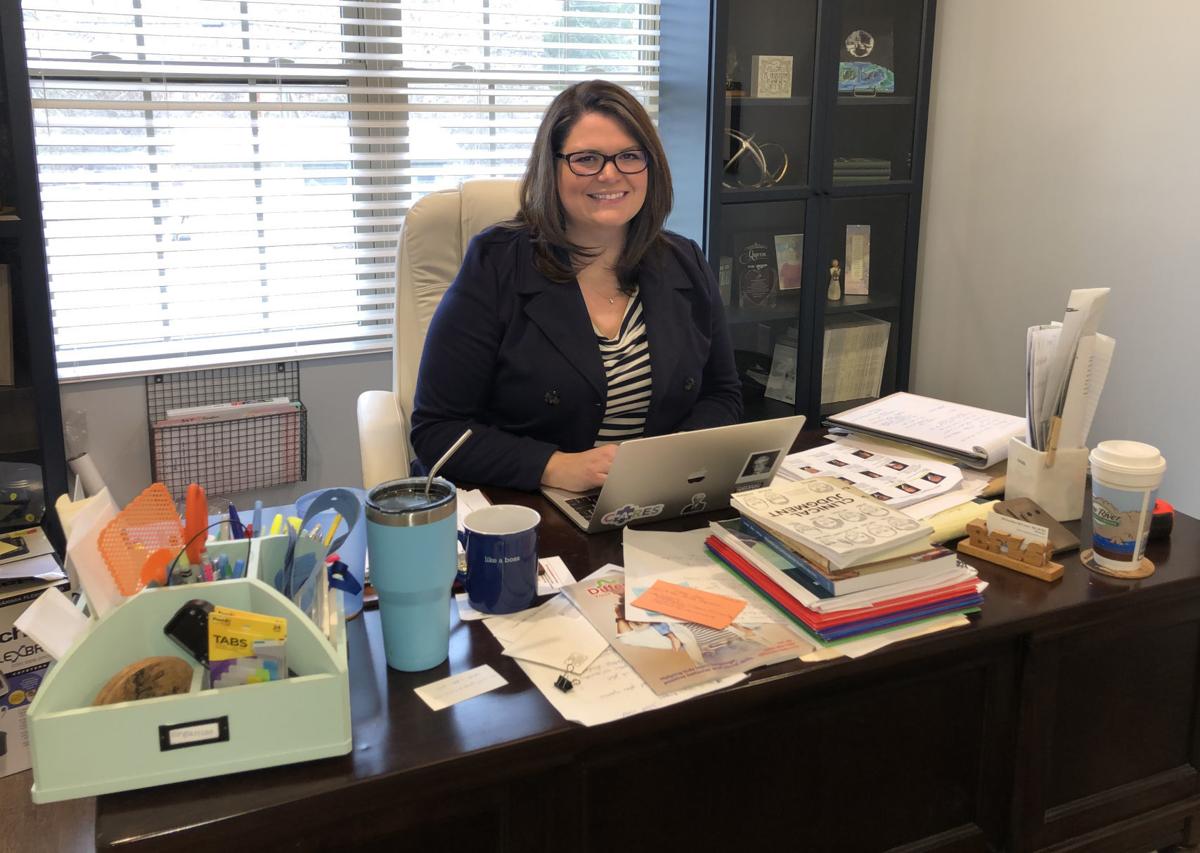 Jill Scarbro-McLaury, director of Bright Futures, works at her desk. She started the facility in 2007 in her grandma’s kitchen and has expanded operations to a 7,000 square foot building on three acres.

Bright Futures staff often read books to children if the child is inclined to like letters. Reading to them can serve as positive reinforcement. Staff members shown are Kara Thomas, left, and Bright Futures Director Jill Scarbro-McLaury.

Some children on the autism spectrum have a knack for solving puzzles. ABA programs generally include puzzles as a means of teaching problem-solving skills. Children pictured are not actual clients of Bright Futures Learning Services.

Bright Futures has a ball pit in its play area. Fun activities are an important part of therapy.

Working with pegs and colored tubes helps children on the autism spectrum to learn distinctions between similar objects.

Jill Scarbro-McLaury, director of Bright Futures, works at her desk. She started the facility in 2007 in her grandma’s kitchen and has expanded operations to a 7,000 square foot building on three acres.

For Jill Scarbro-McLaury, more than just good cooking came out of her grandmother’s kitchen. It was in that room where the first teaching sessions for Bright Futures Learning Services were held.

An autism treatment facility specializing in applied behavior analysis (ABA) therapy, Bright Futures started in a kitchen in 2007, and continued to grow and work its way through different locations until finding its current home in Winfield.

Scarbro-McLaury claims the majority of southern West Virginia as her hometown. Her father was in law enforcement and the military, and the family moved around a lot. What led her to a career helping children with disabilities is personal.

“Part of my backstory is that I have a learning disability,” Scarbro-McLaury said of her childhood diagnosis of dyslexia.

She credits her family with helping her get the support she needed.

“I am blessed with an incredible family,” Scarbro-McLaury said. “At the time, we lived in Wyoming County in the 1980s, and there were no services there, but they scraped together funding and asked what needed to be done.”

Her family then moved to Barboursville, where a Huntington psychologist was working with kids with dyslexia.

“I learned how I needed to learn, and figured out my accommodations,” Scarbro-McLaury said.

It was in college in Texas that Scarbro-McLaury learned about applied behavior analysis therapy, considered one of the best options for treating autism.

“After discovering behavioral analysis, it became critical to me that kids in West Virginia get access to that,” Scarbro-McLaury said. “I went to Texas because it was the best place to train in the world. I always had the intention of coming home.”

It all began with one student at her grandmother’s house.

Bright Futures worked out of churches for a while, then did a stint at the Mid Valley Square plaza in Hurricane. Once autism insurance legislation passed about a decade ago, Bright Futures was able to expand their services. They found the current home for Bright Futures at the end of 2016 — a house up for auction and in need of repairs. They moved into the facility in early 2017.

In 2019, Scarbro-McLaury received the West Virginia Woman-Owned Small Business of the Year Award in recognition of her work and success.

Autism is a spectrum disorder first classified in the 1940s. It is a neurological developmental disorder that can make it challenging for children to function socially. It is characterized by delays in communication, social interest and repetitive, stereotyped patterns of behavior.

People on the autism spectrum have different levels of sensory sensitivity. “There are basically three different levels on how it is categorized,” Scarbro-McLaury said. “Level one, they describe as ‘needing support,’ but generally it means you’re less impacted and need less services than a level three. Level one is typically what you refer to as ‘higher functioning,’ which is a term that we don’t really use anymore, and level three is more significantly impaired and needing significant support. And, level two is in the middle, and moderate.”

The Centers for Disease Control and Prevention says one in 59 children in the U.S. are autistic.

A child can get diagnosed by their pediatrician, psychologist or other medical doctor. “There are behavioral indicators, such as not making eye contact, their language isn’t developing appropriately, their social interest — are they playing with people?” Scarbro-McLaury said. “Screenings should be happening at 12 months, 18 months and so on. Then if you see some red flags, you can send for a more thorough evaluation, and then from there it’s largely a behavioral checklist.”

Scarbro-McLaury points out that early detection is key to getting a child the best help.

“Most people are not getting diagnosed as quickly as they should,” Scarbro-McLaury said. “Early intervention — just like with everything — can be the most impactful. I think nationally, kids weren’t getting diagnosed on average until after age 4. We need to be getting in there well before that age.”

What actually causes autism? That, as Scarbro-McLaury notes, is the million-dollar question.

“What we know is that it is predominantly genetic-based; research comes out again and again and again showing genetic variants,” Scarbro-McLaury said. “And, because autism is such a broad spectrum, the overall professional thought is that over time we will probably be able to better categorize the different types of autism.”

She says it’s like comparing a Hubble Space Telescope view with a view through a microscope. “We’re trying to get down to the microscope level, but we’re not there yet.”

The first study that came out that showed the effectiveness of applied behavior analysis was in 1987. Dr. Ivar Lovaas at UCLA did a study with a group of 40 to 50 kids with autism. “They did intensive — what we now call behavior analysis — therapy with kids on the spectrum. They found that, overall, it had a 90 percent effective rate,” Scarbro-McLaury said.

Behavior analysis therapy involves one-on-one care with the young children, helping them on an intimate level in whatever way they need specialized help.

“We know that is where we can have the greatest impact, if we are working with children as young as we can, and intensively,” Scarbro-McLaury said. “Behavioral analysis also has significant implications for education.” She describes Bright Futures’ precision teaching program as a type of academic tutoring.

Michael Snyder is the father of 4-year-old Lily, who was diagnosed with autism when she was 2.

“What applied behavior analysis has allowed us to do as parents is to have a child that is able to learn, and now I can function with her,” Snyder said. “Before the ABA, she was very hard to relate with, but now where she has gone through this special training, we’re able to work with her.”

He credits Bright Futures and the therapy she receives with helping his daughter progress.

“Now, she can count to 10 and say some words, and she uses flash cards,” Snyder said. “She knows how to communicate when she wants something. Before this, she didn’t know that people are out there to help you get something off of a shelf or get milk out of the fridge.”

For Snyder and his daughter, the wait time to get into Bright Futures was relatively short.

“We got in pretty quickly,” Snyder said. “One advantage was how young she was. From the time we got her diagnosis to the time she was accepted was about five months. It doesn’t sound very fast, but in the autism world, we got very lucky, fortunately.”

Bright Futures serves around 25 children, with approximately 200 on the waiting list. The average time a child is at Bright Futures is three years.

“All the providers in the state have waiting lists; some are worse than others, depending on the way that the services are provided,” Scarbro-McLaury said. “Ours is probably the worst, because we are really focused on doing intensive one-on-one services.”

The biggest issue in reducing wait times is the shortage of board certified behavior analysts in the state.

“It is a generous estimate to say that less than 10 percent of the kids affected by autism have access to ABA,” Scarbro-McLaury said.

The training problem was made worse with the loss of a master’s program option to train analysts at West Virginia University.

“We’re hearing so much about children with special needs in our state, and we’re going to cut the largest institution’s master’s in special education program? It included the only place to train to be a behavior analyst in the state,” Scarbro-McLaury said.

Surrounding states, and specifically Ohio, have more funding from the state for autism treatment.

“Every state that surrounds us is recruiting for more behavior analysts than we even have in West Virginia right now,” Scarbro-McLaury said. “And, they can pay their people at higher rates than the small business that started in Granny’s kitchen.”

While there is no magic fix, Scarbro-McLaury believes more awareness is key to recruiting future behavior analysts.

“A lot of people don’t know about this as a career field, so when people are growing up, figuring out what they want to be, this isn’t an option,” Scarbro-McLaury said. “We then have to recruit people who have never heard of this, and have no clue what it is, so we have to educate them.”

For more information about Bright Futures, email jill@brightfuturesaba.com or call 681-235-3114.

Chris Slater is a freelance journalist living in Charleston. He can be reached at chrisslater86@gmail.com or on Twitter at @chris_slater.

What many professionals in the autism-care industry saw as a potential life saver for their profession has officially died in the Legislature.